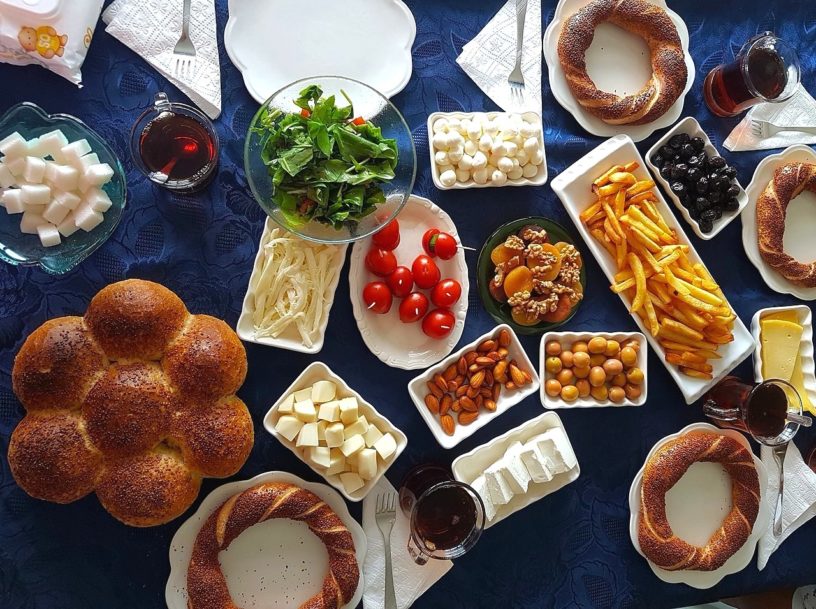 Turkey has a special place for breakfast or Kahvaltı as it’s called in the Turkish language. It’s leisurely enjoyed on weekends and rather quickly during the working week. Breakfast is usually followed by a Turkish coffee and hence why the Turkish name for breakfast is “kahve altı” or “kahveden önce” to mean the meal before coffee.

Breakfast at home in Turkish homes emphasizes freshness with the use of fresh tomatoes, cucumbers, greens, cheese and olives. Small portions are typically served in meze style. Butter, preserves, jams and tapenades are included in the mix. 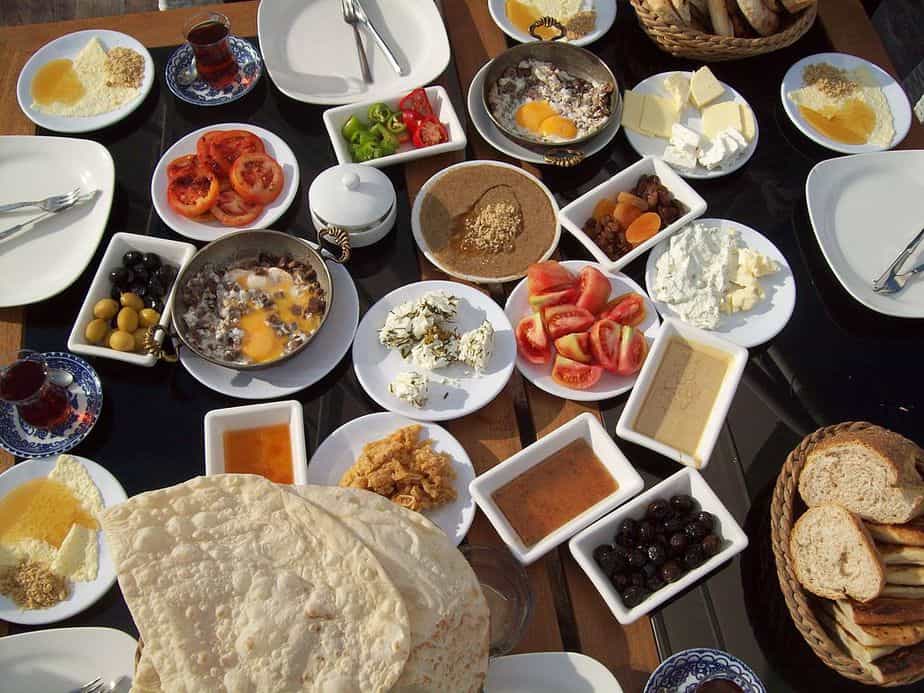 Yellow butter is a Turkish household staple as many dishes are cooked with it, including Turkish rice. For breakfast, it’s enjoyed as is with warm slices of bread, of course!

Tea is freshly brewed and served with cubes of sugar. On the other hand, bakeries carry excellent fare that’s produced fresh daily. You can grab a simit or a savoury pastry on your way to work, and enjoy it with tea that is sold aboard the urban ferries.

Read on to find out what exactly goes into a great breakfast in Turkey!

Bread is an important component of breakfast in Turkey. Corner bakeries carry white or whole wheat bread that’s consumed every day. Most people prefer a bakery to a supermarket as they produce the goods fresh every day. Most start baking before the break of dawn even! 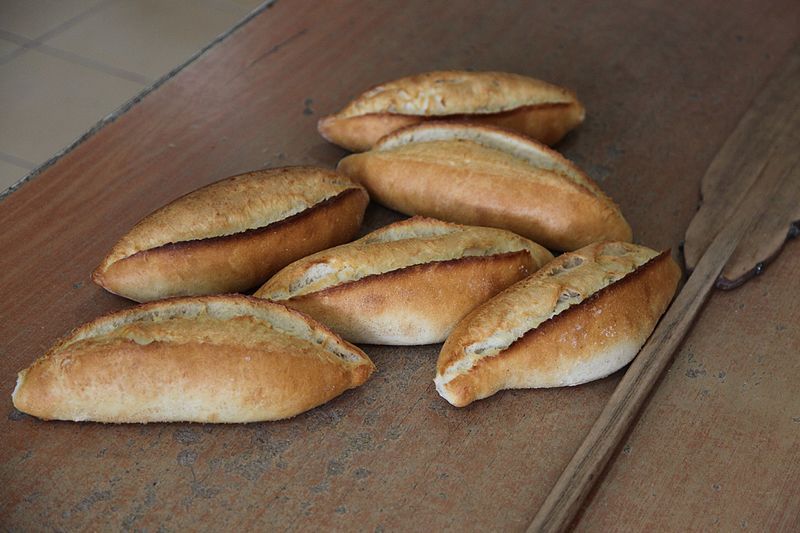 Savoury options such as simit, açma, pogača and boyoz are available but some only regionally. Artisan village bread is another variety which is made entirely out of whole wheat flour or multi-grains.

The ringed crusty bread with sesame on top called Simit is a staple for breakfasts all over the country, but its preparation differs regionally. It’s a popular Turkish street food that can be enjoyed cheap as it’s less than 2 liras per piece. 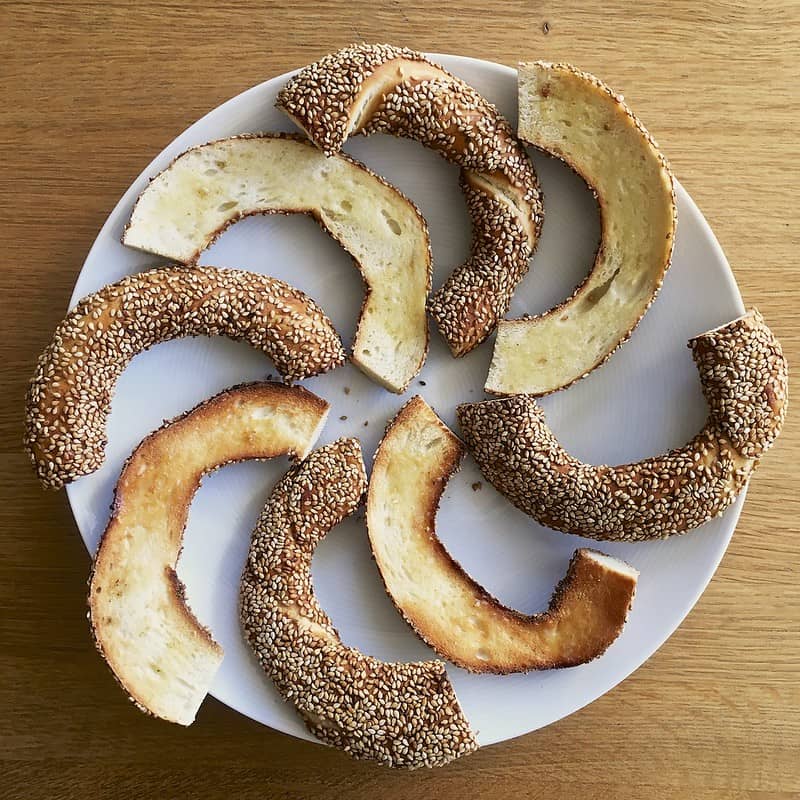 Some varieties are made with molasses, while others are made especially for religious days. Mini versions in the cookie-style are a popular snack eaten throughout the day.

Açma, however, is a soft, flaky pastry that can be both savoury or sweet with olive paste or chocolate as a filling. It’s also available plain and usually sprinkled with sesame and nigella seeds on top.

Boyoz is a popular choice and is associated with the Aegean city of Izmir.  Consumed with boiled eggs and some hot piping tea, it’s a quick but enjoyable breakfast. Brought over by Jews from Spain in the 15th century, it’s exclusively made in Izmir. Following the original recipe, its ingredients are flour, tahini and oil. Fillings of cooked potatoes, eggplants, cheese, olives and most recently hazelnut spread can be found in some bakeries around the city.

Another offering is Börek which is phyllo pastry filled with either cheese, potatoes and spinach. It’s sometimes enjoyed as sigara börek, a cylindrical version of this savoury pastry.

Turkey offers a great selection of local cheeses (peynir). The history of the production of cheese in the country goes back to the Ottoman Empire. Early in the empire’s history, its capitals changed from Bursa to Edirne which is close to the Balkans where cheese production flourished. As such, cheese was then brought to the final capital: Constantinople. As the empire covered a vast area in the Balkans and even the Caucuses, the production and consumption of cheese spread. 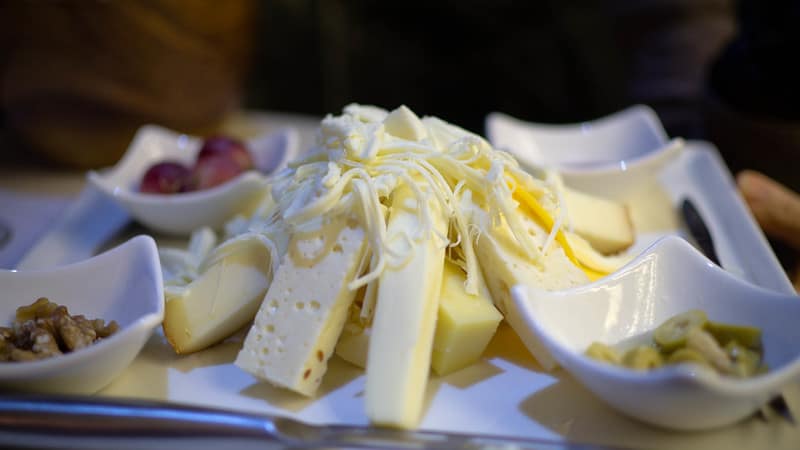 Today, cheese is an important component at breakfasts in Turkey. A variety of cheeses are served in meze style — white cheese, pale yellow cheese and Tulum cheese. It’s consumed alongside olives, olive oil, tomatoes and cucumbers.

A stringy cheese called Çeçil is from the Erzurum province in the east. Kaşar cheese is another staple. An alternative to mozzarella, it’s used in oven-baked dishes.

White (Beyaz) cheese in the same vein as Feta is another choice. Another white cheese from Ezine, a town in the Western Çanakkale province is a popular choice especially in the Aegean region. Additionally, spreadable cheese such as Labne (it’s different from strained yogurt which is what Labne is in the Middle East) and a whey cheese called Lor are also popular choices.

In Eastern Turkey, leftover whey is mixed with spices to make dried surk. In the Black Sea region, local string cheese is mixed with butter and cornflour to make a regional cheese fondue called Mıhlama. The dish is now popular all over the country.

You can try different cheeses at the Egyptian Spice Bazaar in Istanbul and local charcuteries around the country.

It is difficult to imagine social events in Turkey without black tea or çay and that goes for breakfast too. Turkey produces tea entirely for domestic consumption. Moreover, there are even rumours that tea is being imported as it can’t catch up with the demand. As such, it might be surprising to find that it’s the world’s sixth-largest producer of tea — this symbolizes its importance in Turkish society. It’s typically served in tulip-shaped glasses. 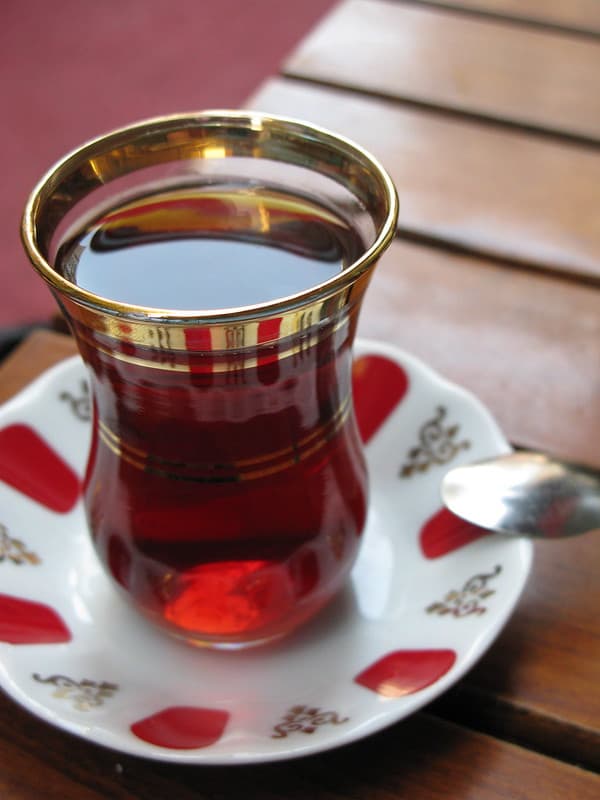 Freshly brewed in a double teapot (similar to a samovar, with a kettle at the bottom and the infuser at the top), it’s allowed to “sit” for a while. This allows the black tea leaves (usually with bergamot) to unfurl and infuse the water thoroughly.

The concentrated tea is red-mahogany. First, the infused tea is poured and then topped with hot water. This way, the tea can then be consumed strong, mildly strong, or weak depending on individual preferences. It’s an entirely different way of brewing tea instead of the tea bag method. Unlike English tea, milk is never added. Cubes of sugar are generally served and sometimes lemon as well.

Olives are an important component of Mediterranean cuisine and it’s not different in Turkey. A variety of olives are sold in the country and served with a dash of olive oil at breakfast. Savoury pastries or soft rolls such as açma are normally filled with black olive or green olive paste. 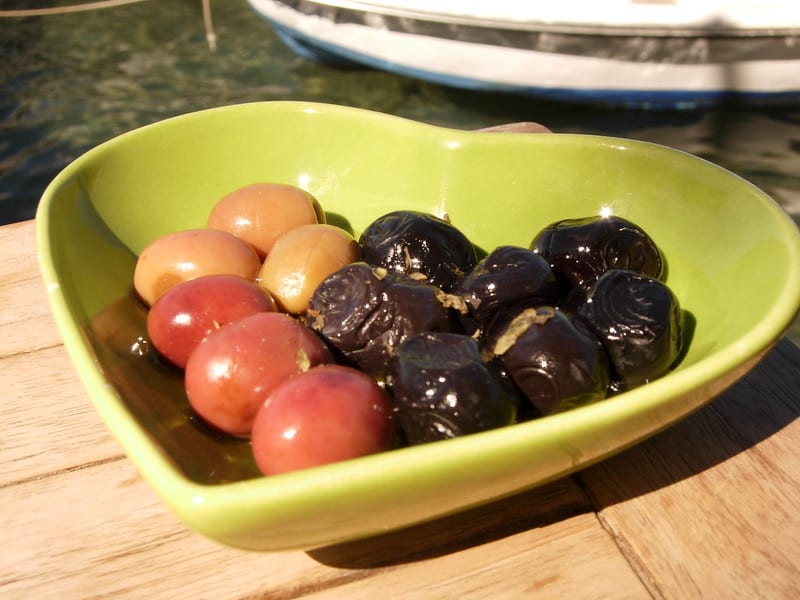 Alternatively, green and black olives tapenades can be bought at neighbourhood markets. You can find shops selling many varieties of olives with their origins marked on the labels. Sold by weight, you can ask to try them before you take them home to enjoy. These shops have a great selection of olive oils too. Find such shops at the fresh produce market at the Kadıköy Çarşi.

Sweet spreads and jams are a colourful addition to the breakfast table in Turkey. Mostly homemade and prepared seasonally, the most popular ones are oranges, strawberries, apricots and figs. 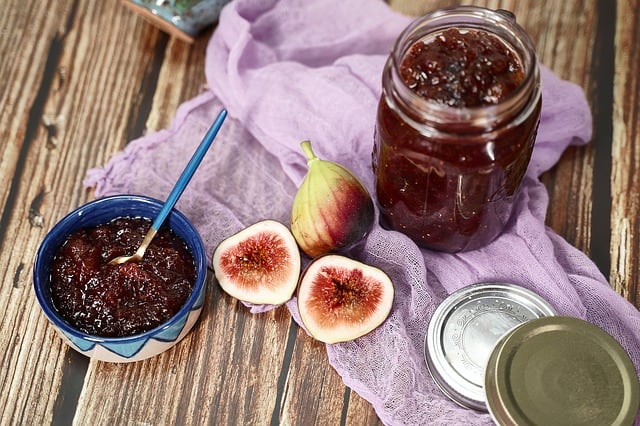 In the Aegean and Mediterranean regions, local ingredients such as citrus and oranges are used to prepare jams in many different ways. In other provinces, fruit preserves with whole eggplants, oranges and figs are common.

Savoury and spicy spreads called kahvaltılık sos or breakfast sauce can sometimes make an appearance. These are made with tomatoes, red peppers and walnuts. Tomato and pepper pastes are frequent ingredients in Turkish cuisine, you can easily find them in that section of the supermarket. Olive spreads as mentioned earlier are another tangy option. Enjoy them on a slice of crusty local bread!

Fried egg with sliced spicy sausage called sucuk is a much-loved breakfast dish. Sometimes it’s served as is without eggs. 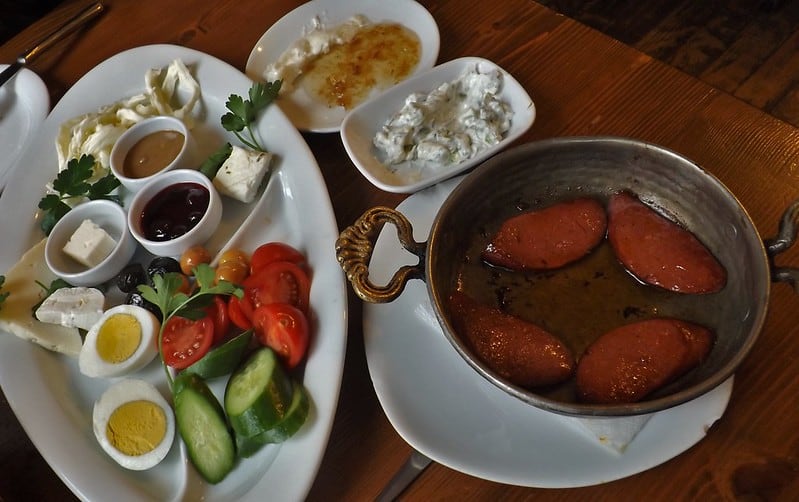 Offered in restaurants who serve breakfast and brunch, it’s prepared in a small copper frying pan. Other dishes cooked similarly are Turkish pastrami (pastirma) with eggs.

The most popular main at breakfast is called Menemen — eggs cooked with tomatoes and tomato sauce with peppers. Unlike the now popular Middle Eastern poached egg dish Shakshuka, the eggs are scrambled together with the tomato sauce. In Turkey, Şakşuka is an eggplant meze and it’s an entirely different dish with the same name!

A type of clotted cream called Kaymak is the main star of the Turkish breakfast in our humble opinion. Served with honey at breakfast, it makes for a delightful treat that’s too difficult to resist. 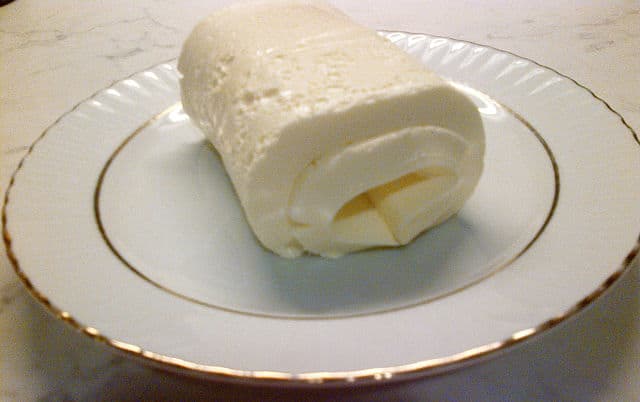 Made from the milk of wild water buffalos, you can find shops specifically selling this (shopkeepers are called Kaymakçı).

It’s served with other treats such as baklava, ayva tatlısı or quince dessert and with a bread pudding called ekmek kadayıfı. Karaköy’s Özsüt sweet shop is where you can enjoy this treat today.

When you go to popular breakfast joints such as Moda Van Kahvaltı Evi, you’ll see gözleme as an option. Breakfast from the Van region in the far east of Turkey is on the menu here. 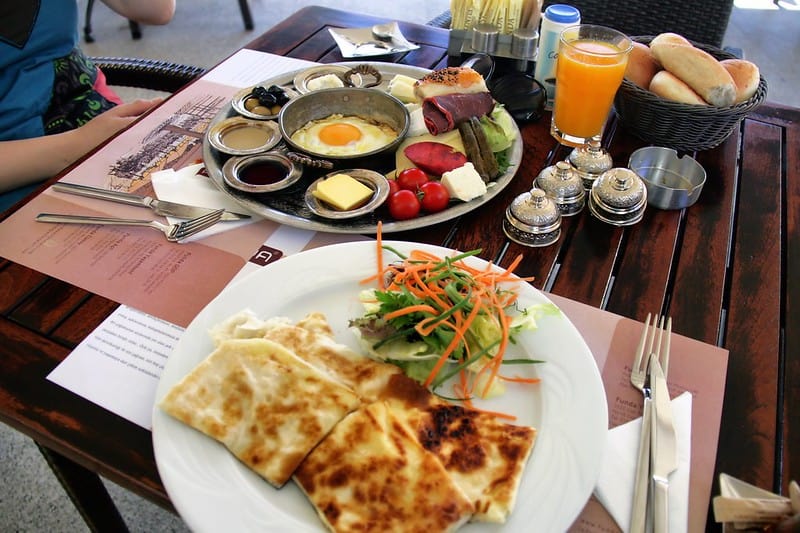 Gözleme a type of flatbread, shaped into half-moon or squares with cheese and potatoes, greens and herbs.

Pişi is another typical breakfast dish that’s popular all over the country. It’s fried dough and made easily with few ingredients. It’s enjoyed with tea in the evenings and for holidays.

Breakfast is a rich affair with a variety of dishes and tastes in Turkey. Thankfully there are 365 days in a year so we get to enjoy the rich breakfast culture of the country all year long!