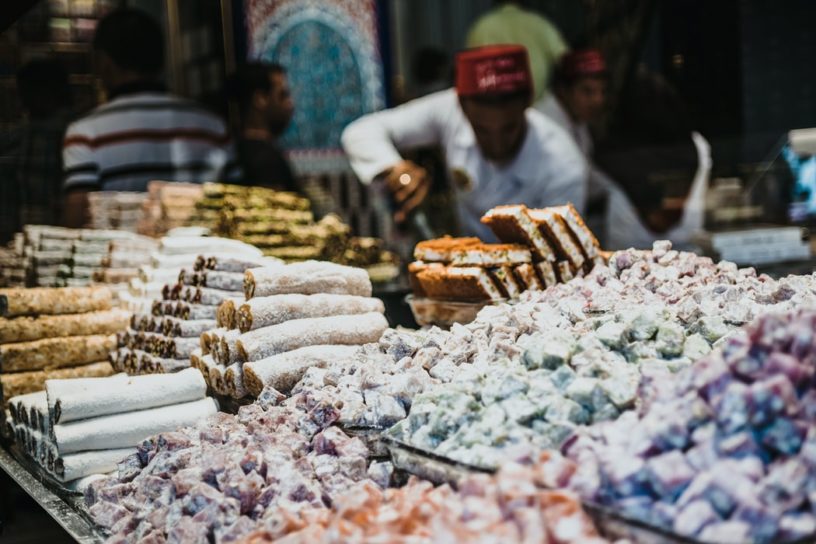 Lokum is known around the world by its other name: Turkish Delight. These chewy transparent squares of sugar gel, water and starch come in numerous flavours with the addition of essences.

The most popular flavours are rosewater, mastic gum and peppermint. Sometimes it’s also filled with pistachios, hazelnuts or apricots and dates and dusted with powdered sugar on top. It is usually cut up into small cubes before being served or sold. It’s a sweet that involve starch and sugar and some flavours such as rosewater or lemon, etc. It can be considered the predecessor to modern gummy bears or jelly beans!

Turkish Delight and C.S. Lewis’s The Lion, the Witch and the Wardrobe 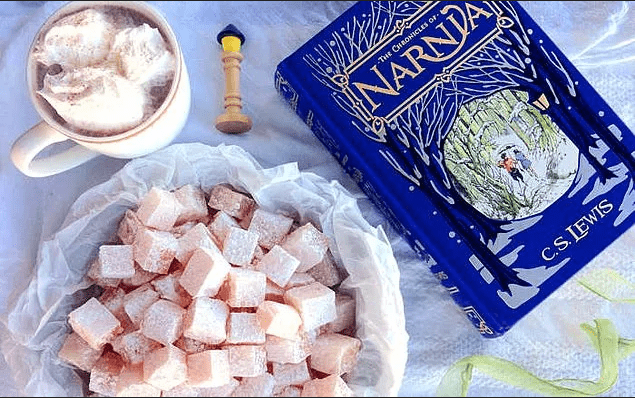 Turkish delight is even featured in the C.S. Lewis story – The Lion, the Witch and the Wardrobe. Perhaps it was C.S. Lewis’s favourite as he featured it heavily in his story. The protagonist of the story even has a Turkish name, Aslan, meaning Lion, a popular name in Turkey and Jadis for witch could come from ‘cadı‘ – the word for witch in the Turkish language. In The Lion, the Witch and the Wardrobe, the first book/film of the Narnia series, Lucy enters the magic wardrobe to find herself in the magical world of Narnia.

In fact, it was another character, Edmund, who is bewitched by the sweet delight by the White Witch, Jadis, in the story. He is usually mean to his siblings and treats them badly and is selfish and ends up giving up his family for the taste of Turkish delight. He enters a wardrobe and finds himself transported to a snowy kingdom. The mischievous Edmund eats Turkish delight from the hands of the White Witch, as if it were the most beautiful thing in the world! In fact, this scene in the series has such an impact that some foreigners only know Turkish delight as the sweet that’s mentioned in Narnia. That’s how they usually react.

To befriend Edmund, the White Witch asks him a simple question: “What would you like best to eat?”. She asks the boy what he loves to eat and it turns out that it is Turkish delight. Magically, he finds himself eating it at that very instance. In the story, Lewis states, “the best Turkish delight. Each piece was sweet and light to the very center“!

The name Turkish Delight is what the British called it and dates all the way back to the 1700s. Initially produced with honey, molasses, water and flour, the lokum that we know today uses starch and refined sugar. The earliest versions of lokum were flavored with rose, musk, almonds, or pistachios, all exotic tastes of far off places such as Istanbul, that not many in England could only taste through these little lumps of delight, which was otherwise also called ‘Rahat Lokum’. In 1861, England began importing the sweets, adverts were put up and even specialty shops cropped up.

Perhaps, it was C.S. Lewis who dreamt of far off exotic places and candies only available there. C. S. Lewis started to write the Narnia series in 1939 and was able to complete it in 1950. In other words, it coincides with the period of absence and rationing during the Second World War.

The research journals JStor’s blog deals with why Turkish delight was so appealing to C.S. Lewis at the time of WW2: “When the White Witch asks Edmund what he’d like best to eat, it’s entirely possible that Lewis was answering for him: the candy that would be most difficult and expensive to obtain. Edmund isn’t just asking the witch for candy, he’s essentially asking her for Christmas, too.”

It is believed that the confection was created in Turkey by Hacı Bekir in the late 1700s. Hacı Bekir’s family, now in its fifth generation, still operates the small original shop called Ali Muhiddin Hacı Bekir Lokumları, very close to the Egyptian Bazaar and sells its goods for more than 2 centuries. Hacı Bekir is the considered the oldest known company in Turkey being 240+ years old. It produces more than 100 varieties of Turkish delight and also sells other candies, tahini halva and other sweet pastries.

Hacı Bekir came to Istanbul, the Ottoman capital, from a small town called Araç in the Kastamonu province, on the Black Sea coast. He opened a small shop in Istanbul’s Bahçekapı district and started selling the confectionery and hard rock candy (called akideler) from a small store in 1777. After his pilgrimage to Mecca, he earned the title Hacı.

Bahçekapi is just behind the New Mosque, between Eminönü neighbourhood and the Sirkeci Station that connects Istanbul to Europe. It also encompasses the Sultanhamam, Spice Bazaar, the Fish Market and Tahtakale as the connection point to the Galata Bridge, the veins of commercial life and the brain of the bureaucracy, Bab-ı Ali (the place of the Ottoman Grand Vizier) is an important commercial district of Istanbul.

Hacı Bekir Efendi produced the sweet delight with the combination of sugar and cornstarch, which makes the candy chewy. His unique creation became so popular that news eventually reached the Ottoman Palace. He was then awarded the title of the palace confectioner soon after and he remained so until the dissolution of the Empire in the early 1920s. He was even declared the same in Egypt in 1911. The years following this honour, the desserts reached into the hands of food critics in Paris and in NYC and were highly praised. 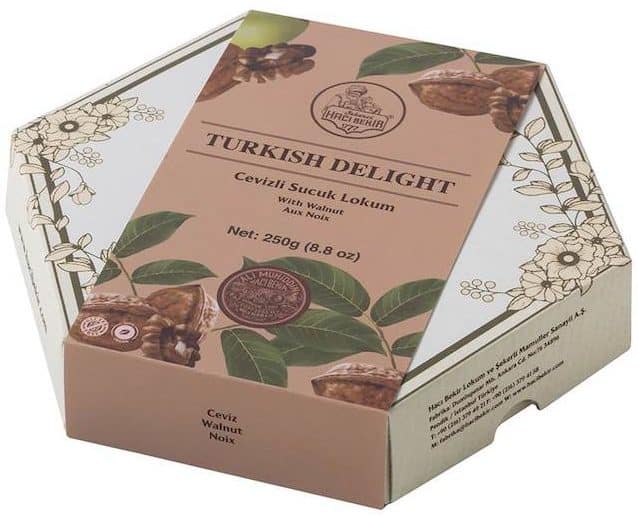 The women in the family and subsequent children were heavily involved into making sure the name became known internationally. When Bekir’s son took over after his death, his mother, Reşide, helped established the name and helped in the operations of the business. According to the BBC, she soon became one of the women to hold a passport from the newly established Republic of Turkey (after 1923).

Today, the Haci Bekir business includes seven stores in Istanbul and they also have an online shop for their international customers. They also keep up with the trends by introducing some unique modern flavours such as the ginger, jam, orange, cinnamon and even a chocolate flavoured Turkish delight. Visit the small but “living museum” shop at the Bahçekapı and try some of the lesser-known lokum flavours.

The same secret recipe is used by the family even today and is beloved by all! However, earlier it was honey and molasses that were used as sweeteners in confectionery manufacturing, which started in Turkey in the 16th century. Flour was used as a water binder and texture builder.

When sugar produced in the refineries established in Europe at the beginning of the 19th century came to Turkey as “loaf sugar” and in Turkish as “Kelle şekeri,” Confectioner Hacı Bekir pounded this sugar in mortars. He then melted it, adding rose, cinnamon, gum, orange and lemon to different flavors and colors and started to produce it as the Turkish delight we now consume. In addition, by using the starch found by the German scientist Kirchhoff in 1811 instead of flour, he created the irreplaceable Turkish delight on our tables today! 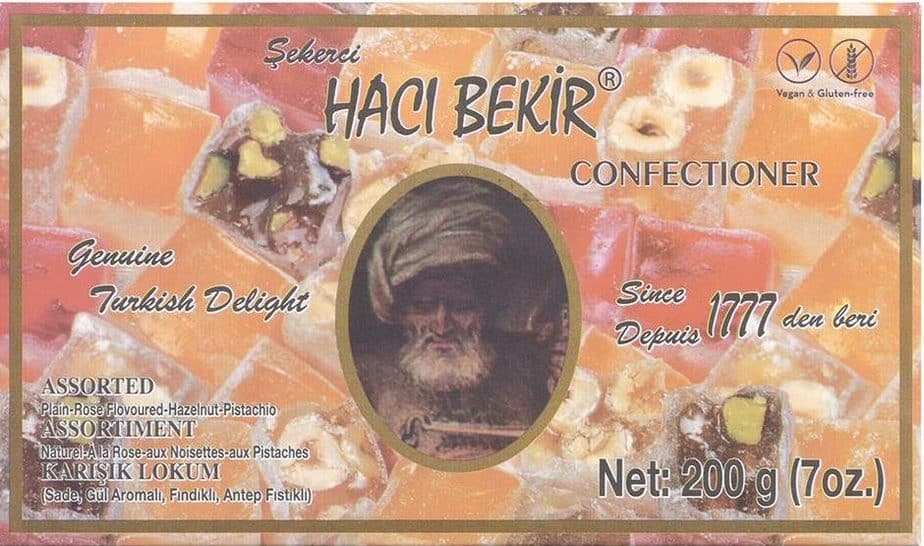 On the other hand, hard rock candy or Akide şekeri is also produced in the shop alongside Turkish delight. It is one of the oldest confectionery types of Turkish and Ottoman Cuisine, dates back to the 16th century.

What lies behind the unique taste of Haci Bekir Akide is the slow boiling of sugar and fruit in copper pots for hours, mixing them together. This aromatic flavor is then poured on marble counters and kneaded. This mixture, which has been kneaded to a paste-like consistency, is cut with sugar scissors and prepared for presentation. 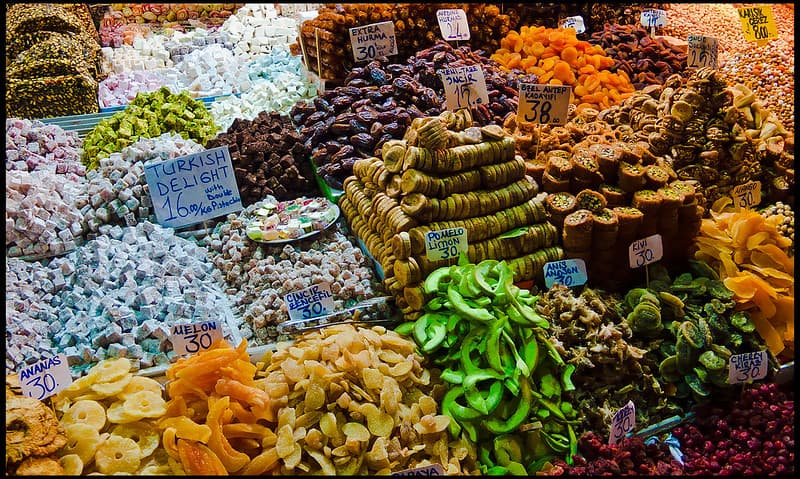 There are many kinds of Turkish delight according to taste and production style. Some of the most popular flavours have these additions: rosewater, Kuş (bird), hazelnuts, walnuts, pistachios, coconut shreds, fruits such as lemon, mint, pomegranate, saffron, rose petals and chocolate. The flavours and types are basically endless!

A mix of many flavors cut into small cubes is called “kuş lokumu,” meaning bird’s lokum. The size is what matters here as it’s small enough even for a bird. Flavours include rose, mint, mastic and fruity ones such as lemon, orange or strawberry. Or you can choose spicy ones such as ginger or cinnamon. Types with nuts such as pistachios, walnuts and hazelnuts are another option. Plain lokum, also called “sade lokum” with no flavourings are just pure sugary delights and were quite popular back in the days.

Nowadays, many places are trying different flavours and additions such as chocolate or ginger flavoured lokum or dried rose petals. The ones with grated cocunut is now a classic but it wasn’t the case earlier. One can even say that it distracts from the actual simplicity of what Turkish delight really is.

Turkish delight has a great texture that can only be described as soothing. Given that it’s actually called Rahat lokum or from rahat-ul-hulkum – it’s the feeling of the silky soft texture easily on the mouth sliding down to the throat. Bayrams or religious hoidays in Turkey would feel empty without them.

Ramadan/Eid al-Fitr is otherwise sweetly called “Şeker Bayramı” in Turkey, literally meaning that it’s the holiday that involves sweets. Preparations for Eid al-Fitr is big in Turkey with sales in sugar, candy and sweets, including Turkish delight, usually skyrocketing before the actual holiday.

Traditionally, hosts serve a tons of different sweets for guests and the young when they visit each other to celebrate the holiday. Lokum is served with Turkish coffee or tea and with other desserts such as baklava. A few cubes of Turkish delight would be given to children with some cash as presents in the past.

Are you ready to make some Turkish delight at home? Ozlem of Ozlem’s Turkish Table, a Gourmand World Cookbook Award winner, offers a recipe for the plain kind on her website.

When cooking, make sure there are no lumps before proceeding to the next steps. In order to prevent it from sticking together or to your fingers, it should be rolled in icing sugar or with coconut flakes. Make sure to leave the Turkish delight at room temperature or overnight or at least 8 hours. Hot and humid climate can also affect its texture so pop it into the refrigerator. If it is still not up to par then dust with just cornstarch and leave it for another day. Then cut into cubes and toss in the sugar mixture.