How to use the Metro in Istanbul 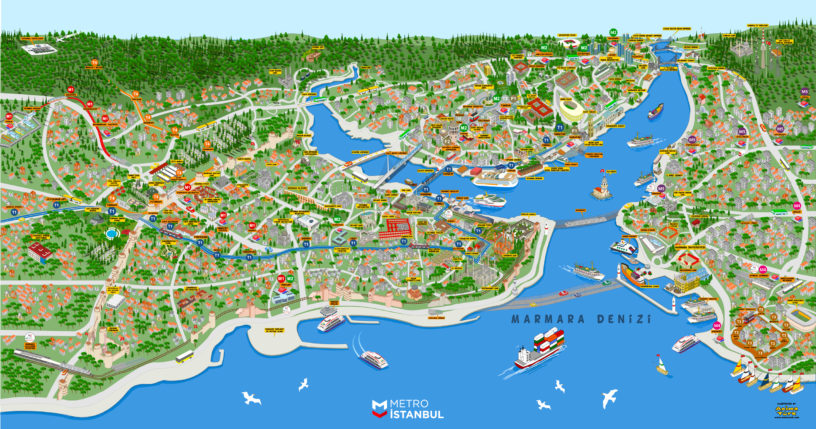 How to use the Metro in Istanbul

If you plan to come to Istanbul and get the local experience, then using the transportation system can one of the ways to do that, apart from seeing the sights, enjoying the food and indulge in some shopping at the Grand Bazaar. Millions of inhabitants use the Istanbul metro every day and you can do it too while you travel! It can take you to the far reaches of the metropolitan city and is a practical way to see the city as it runs for 24 hours a day!

The map below shows the full map of the Istanbul transportation system. There are seven metro lines, three tramway routes, two cable car systems, one funicular line and a Metrobus route — all part of the huge Istanbul Metro System that services this beautiful city.

Take note of the M1A, M1B, M2, M3, M4, M5 and the M6 lines below — those are the metro lines. The other good thing about the metro is that the Metro has a night service.

The modern metro stations with its trains are similar to those that you can find in other parts of the world, and the fare system is also comparable. The stations and trains are clean and expectedly busy during rush hour. Nonetheless, service is frequent and available for all hours of the day, a recent decision by the newly elected mayor. 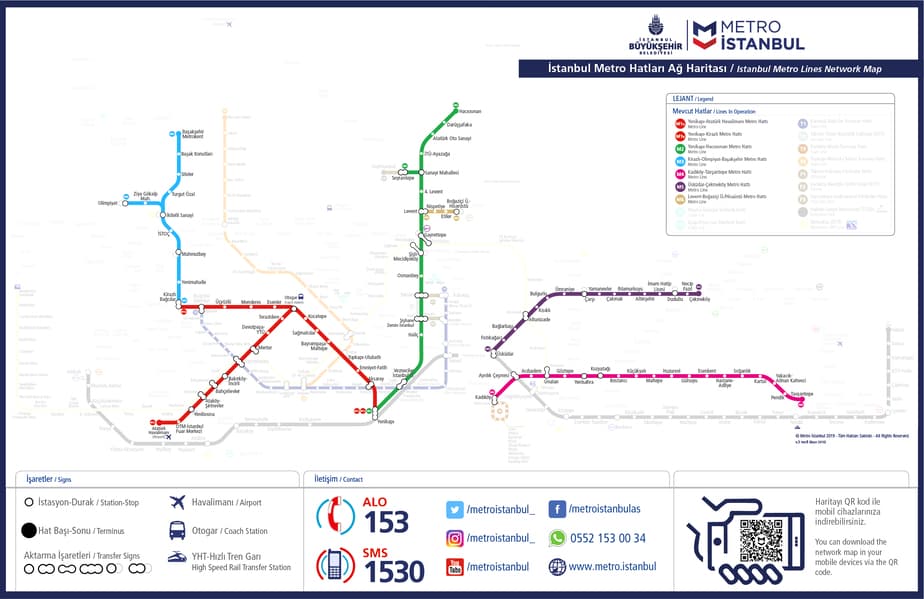 For tourists, the transportation system allows easy access to many of the sights in the historic city, as well as access to many residential neighbourhoods that offer a different perspective of the city. Depending on the location of your hotel, using the metro and other transportation options can save you time. Check out my article recommending the top 5 best areas to stay in Istanbul. When booking a hotel, you can also figure out what metro station is closest to it, unless you’re staying in the old district. Here, using the tramway system is a better option or even choosing to walk in the area.

The metro is available in almost all parts of Istanbul and you can easily travel from Europe to Asia via the Marmaray, the undersea tunnel from Üsküdar to Sirkeci. While separate from the Metro, it costs the same. 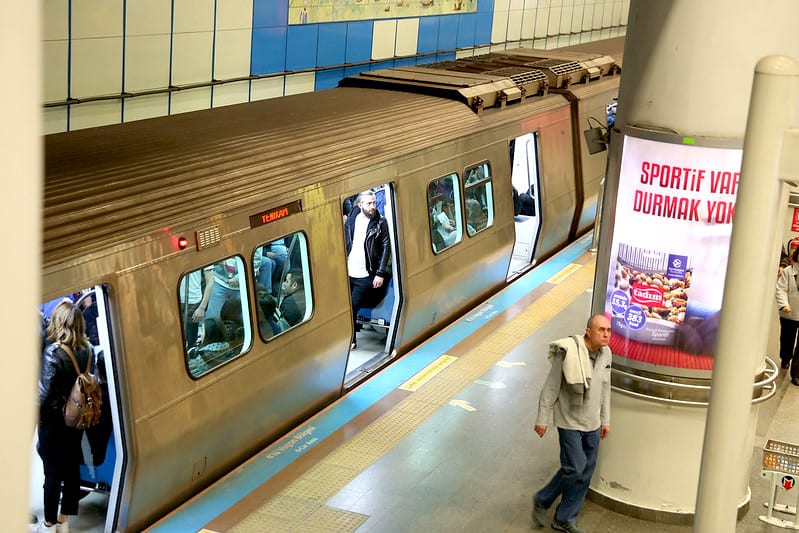 If you pay using the Istanbulkart, it’s even cheaper. The Istanbulkart is similar to London’s Oyster card. For short term visitors, the Anonim Istanbulkart is the best option. You buy the card for 6 Liras and then fill it up with credit to use. One ride costs 3.50 Liras. Top up your card at designated machines or major hubs counters. Moreover, English options are available for those with little or no Turkish skills.

Additionally, you can find some convenience shops or roadside newspaper/snack counters that offer services to top up your card. Look out for Akbil or Istanbulkart ‘Dolum Noktası‘ in places such as the ferry docks in Kadıköy district, the Grand Bazaar, at Eminönü or near the old city in Sultanahmet.

How to spot the metro entrance? 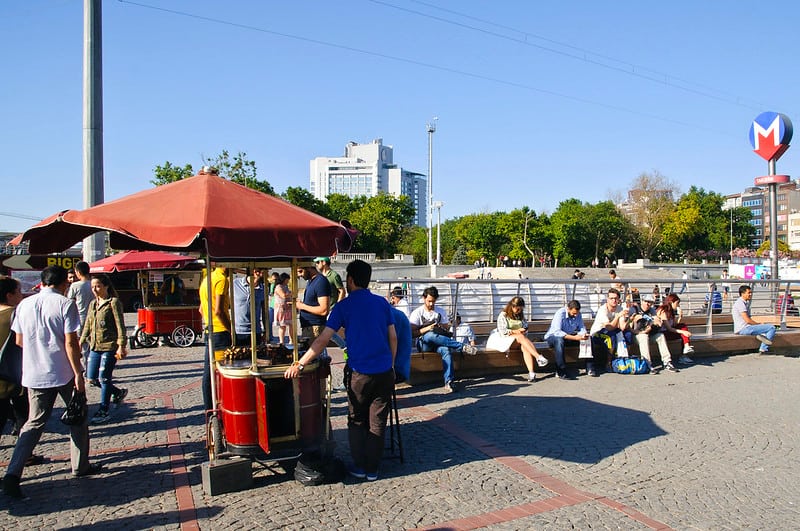 It’s fairly easy to spot the entrances in major hubs in the city. To spot a metro sign/entrance, you’ll see a blue, white and red sign pointing downwards and denoting an ‘M’ with the station’s name below. Some stations have multiple entryways in different blocks of the same neighbourhood, which allow ease of access.

To reach the Metro trains, you have to usually use two sets of stairs or escalators as the tunnels are dug fairly deep underground. Furthermore, as the metro is accessible by escalators and elevators, it can be an accessible option for those with disabilities. The Metro’s website has a great map of these options. 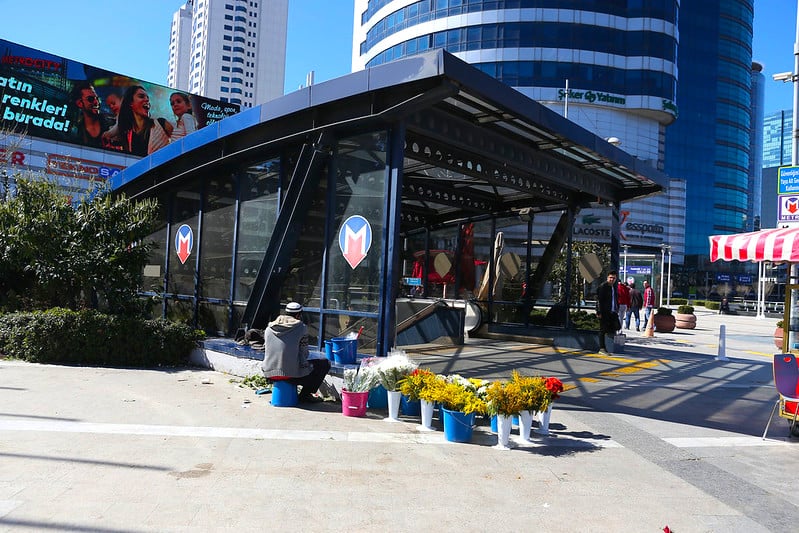 Some stations even have convenience stores inside in case you want to buy a quick bite to eat after. Kiosks outside of some stations offer Istanbul’s famous street food and sometimes even flowers. Some stations lead you to/from shopping malls such as Cevahir Mall in places such as Şişli.

Where do you buy the tickets?

Tokens can be bought from ‘Jetonmatik’ machines with spare change or with paper money. On the other hand, Istanbulkarts can be topped at machines called ‘Biletmatik’ in the stations. English is available for those that need it, as is German too. 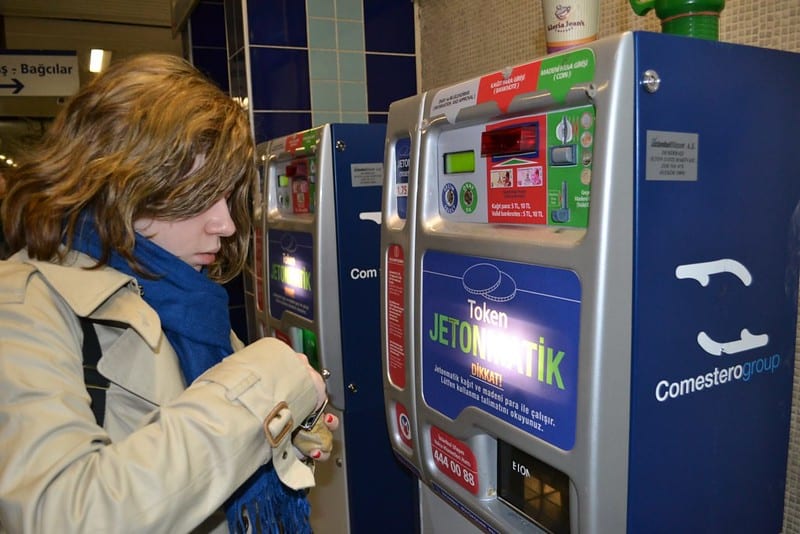 Most machines are available once you reach the turnstile area of the stations, usually after the first set of stairs, but before you pass the turnstile. Top up your card for 2 trips so that you can be sure to have enough in case you get lost. I recommend that you don’t top up more than 2-4 trips worth on the card in case you lose it. You can use the same card for everyone in your group or family, just make sure it has enough credit.

If you’re lost or feel unsafe, security personnel is always present at each of the station’s turnstile. The officer can at times check you with a hand-held metal detector in addition to the already installed archway security equipment. If you have baggage, then a bigger adjacent entrance allows you to get your luggage across with ease.

What kind of ticket should I buy? 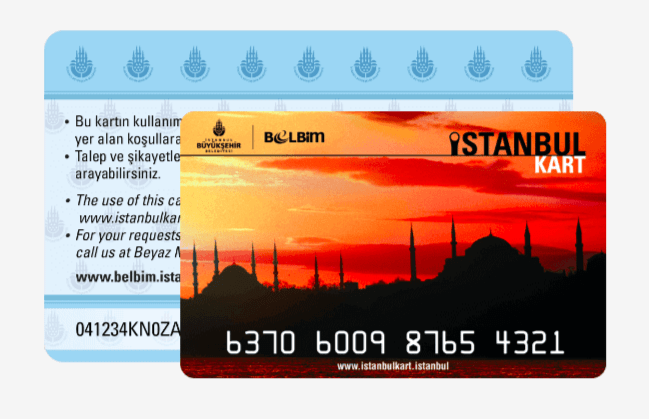 For short term visitors, the Anonim Istanbulkart is the best option. You buy the card for 6 Liras and then fill it up with credit to use. One ride costs 3.50 Liras and is automatically deducted from your Istanbulkart. When you swipe your card at the turnstiles, you’ll see what you paid first, then the remaining balance.

Jetons are also available if you’re only going to use the transportation system only for a couple of times. 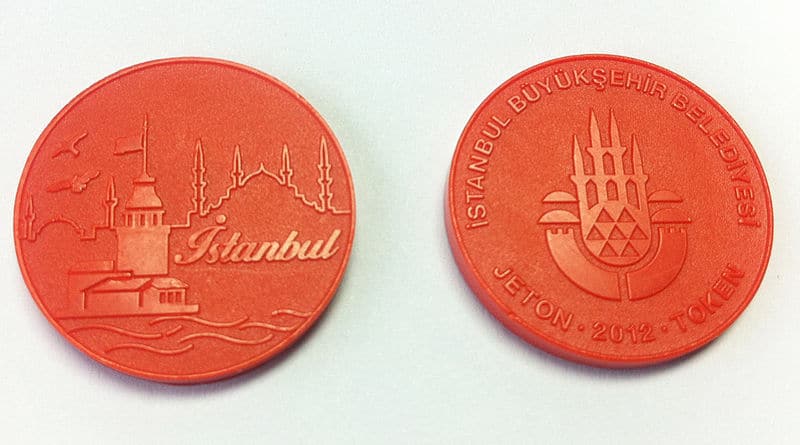 It is a cheaper option than the Istanbulkart for which you’ll have to first buy the card, and then top it up with more credit. Jetons are a good option if you’re going to use it for one or two rides maximum.

Other tips on how to use Istanbul’s metro system:

1. Some stations are not far away from other transportation hubs such as the Metrobus, tramways and bus stations. If you plan ahead, you can use them to your advantage. For example, going to the European side from Sabiha Gökçen Airport on the Asian side. While the metro is under construction there, excellent bus services can take you to the other side between 1-2 hours depending on traffic.

Moreover, stations provide a map and it’s worth a try to ask in the station for one. Alternatively, some hotels provide maps of Istanbul in addition to tours, or you can ask at a major transportation hub such as Yenikapı. 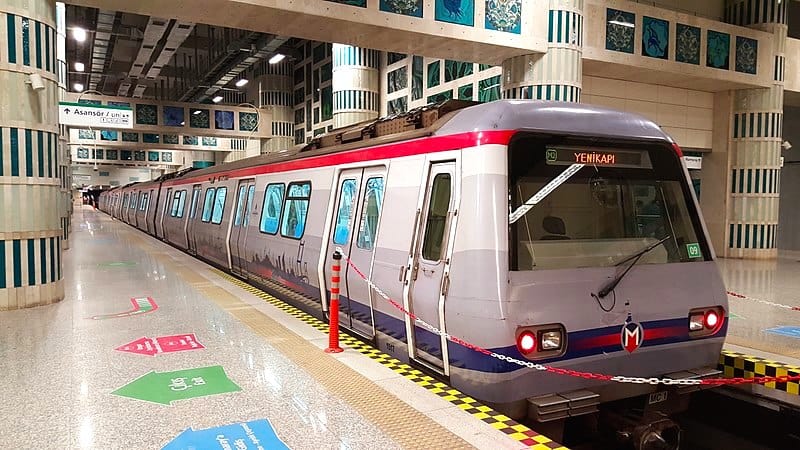 2. Inside the trains, you’ll find screens indicating the stations you are at, have just left or are arriving at. Additionally, just above the doors, past stations are highlighted in red and the arriving ones in green. This way, it can be easier to track your journey.

The Istanbul metro is as advanced as other metros around the world. With more construction on the way, many inaccessible parts of Istanbul will be discoverable in the near future. 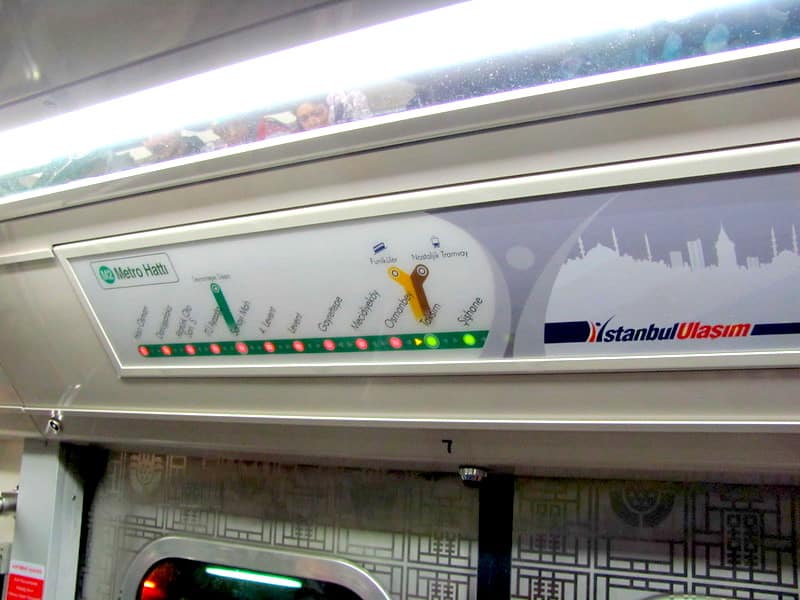 3. Before you plan your vacation to Istanbul, check out the metro’s website beforehand (English is available) and our other articles on this beautiful city. If your hotel is in the European part, then Şişli, Taksim and Galata areas all have metro stations passing through. These are the Şişli-Mecidiyeköy, Osmanbey, Taksim and Şişhane metro stations on the M2 line, respectively.

On the other hand, if you want to go further down to the old city, then take the same line to Vezneciler Istanbul University station. This is close to the Sahaflar market or second-hand booksellers market, not so far away from Topkapı Palace and its beautiful Gülhane Park.

4. Istanbul is a big city and if you are travelling from the newly constructed Istanbul Airport (IST) in the northwest of the city, there’s no metro available as it’s still under construction. Moreover, if Istanbul’s Asian side is your destination then buses to Kadıköy‘s city centre is a better option. Once you get there, the metro or the Marmaray can be used depending on your travel plans.

5. Just be vigilant at all times and keep your belongings in sight and valuables away from prying eyes, like in all big cities of the world. Backpacks should be carried in front instead of on your back to avoid pickpocketing. Check your seat or area before you leave the trains. The Metro offers lost and found centres in certain metro stations on the seven metro lines.

Finally, the metro is the cheapest option if you plan to stay in the city for a long vacation. It allows you to discover some of the places in the city that most tourists know little about. For those staying for more than a week, getting familiar with the metro is one way to experience this East-meets-West city!