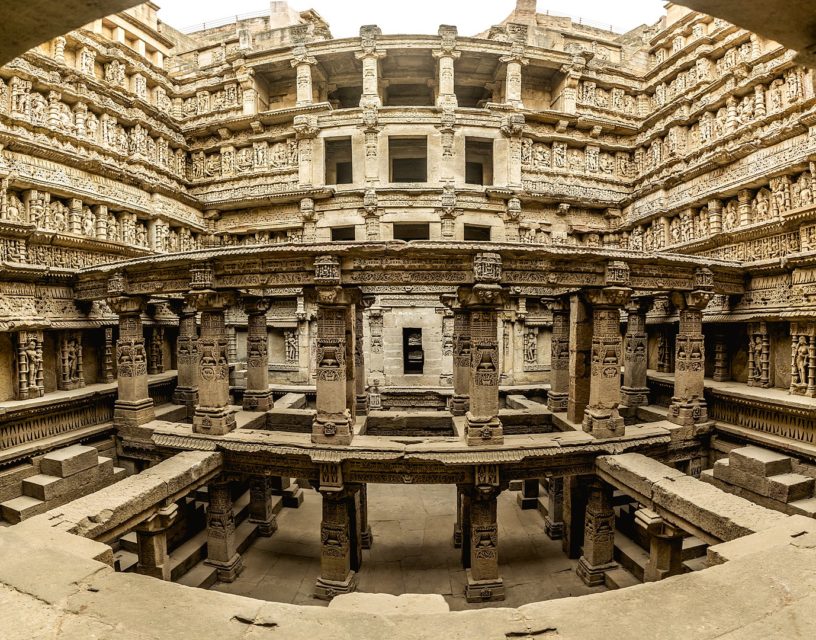 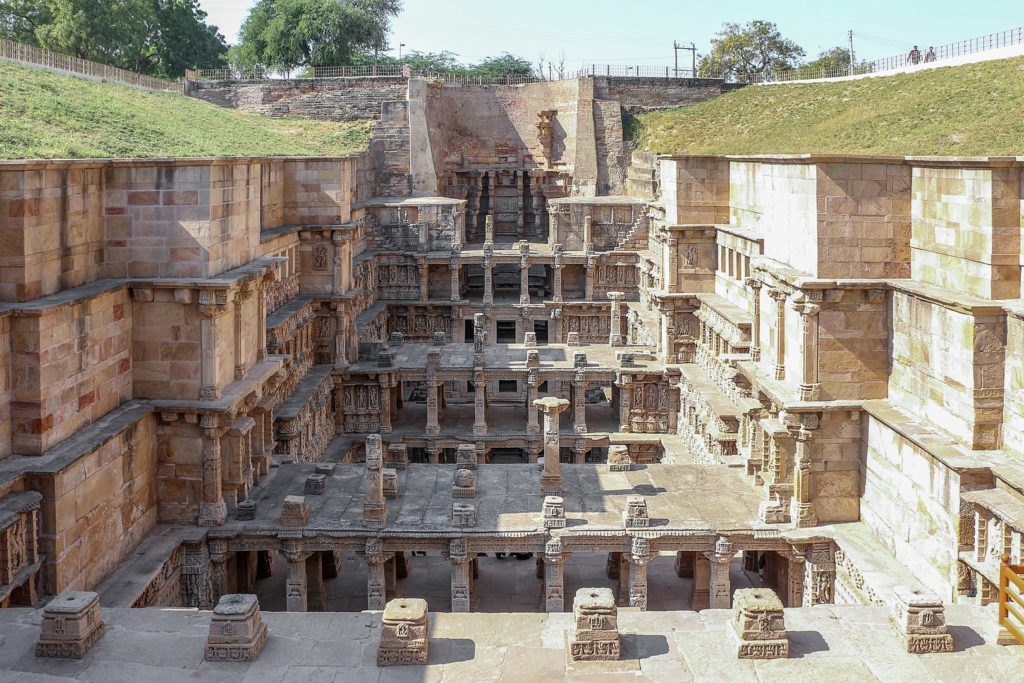 Rani Ki Vav is a stepwell that is situated in the town of Patan in Gujarat which is a state of India. It is located on the banks of the Saraswati river. It was rediscovered in the 1940s and restored in the 1980s by the Archaeological Survey of India and has also been listed as one of the UNESCO World Heritage Sites in 2014.

It is considered the finest ad one of the largest stepwell architecture in Gujarat since it was built at the height of craftsmen’s ‘ability on stepwell construction and the Maru-Gurjara architecture style. The architecture and sculpture are similar to that of the Vimalavasahi temple on Mount Abu and the Sun temple at Modhera. It is also considered enormous at 210 feet long and 65 feet wide.

This article covers the Top 10 amazing facts about Rani Ki Vav that you should consider knowing before planning a trip to visit the place.

1.  It is known as the queen stepwell

Rani Ki Vav was built in memory of Bhima I of the the the Solanki Dynasty by her husband Rani Udayamati, who was the 11th-century king. The stepwell was referred to as the queen’s stepwell as it epitomized the love of the queen.

According to some folks, the queen of Udayamati had come up with the idea so that she could be able to provide water to the needy people.

2. It was a unique form of water storage system

Stepwell is popularly known to be a unique form of the water storage system in India as they are usually concealed water resource and storage system. They have been constructed since the 3rd millennium BC and they eventually evolved from what was a pit in sandy soil to multi-story works of art and architecture.

Therefore it was believed that the unique Vav was constructed to make sure that they were proper management of water, as this place received less rainfall,  hence a huge Vav was built on the banks of the Saraswati river and was later on buried in the mud due to the flood in the river for many years.

3. Architecture style of the stepwell

Rani Ki Vav is world-famous for the architectural style it was designed like an inverted temple with seven levels of stairs that were delightfully carved and sculpted with mythological and religious imageries. It is about 30m deep and the architecture reflected the rich style that was used during the time of the Solanki dynasty.

It consists of over 150 sculptures, whereby there are over 500 of them and more than 1000 small sculptures within the stepwell that hold the religious, mythological, and importance of small literary work.

Rani Ki Vav was added to the list of UNESCO’S world heritage sites on 22 June 2014, it is therefore considered to be among the 40 world heritage sites that are located in India as of 2022. It has also been declared a Monument of National importance and it is therefore protected by the ASI according to the act of 958 which was later amended after it was revised in 2010. Therefore the ASI is the sole responsibility of the Rani Ki Vav management.

5. There are art work of all gods and goddesses 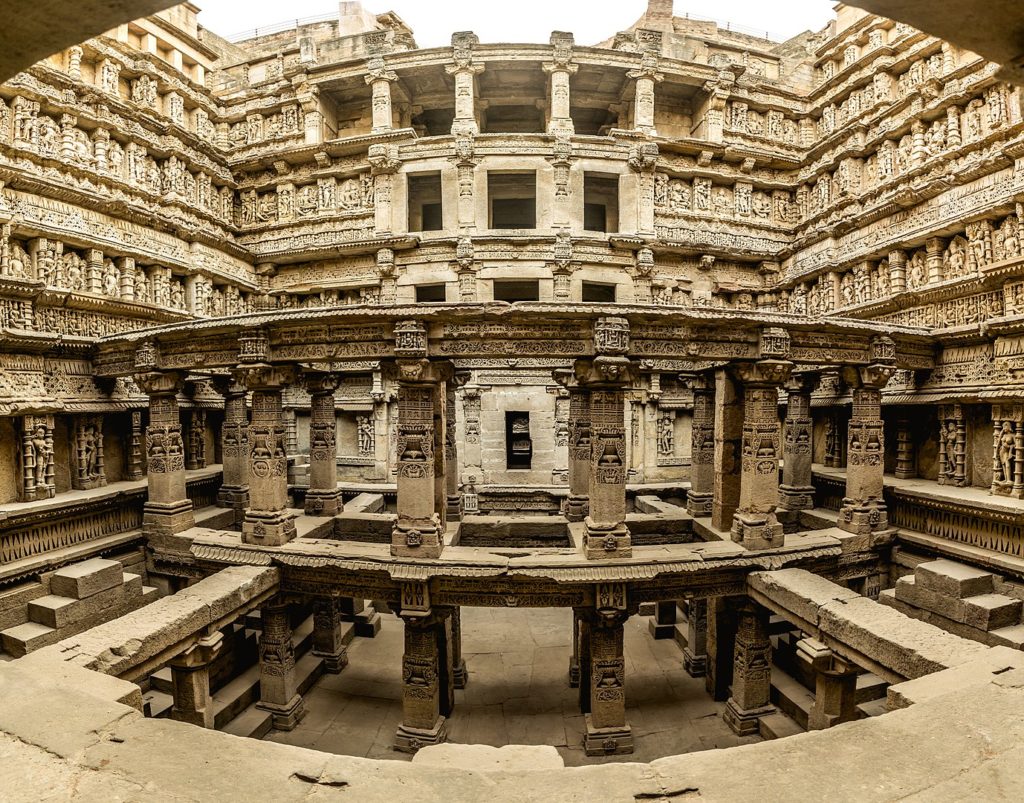 Inside Rani Ki Vav, By Kshitij Charania – Own work, Wikipedia

The stepwell is said to contain artwork of all gods and goddesses, demi-gods and deities, water nymphs, and celestial musicians, which include, Mata Lakshmi, Parvati, Lord Ganesha, Brahma, Kuber, Bhairav, and Surya. They are can be seen as you descend the steps of the Vav.

There are also the artifacts of Lord Vishnu’s Narasimha, Vamana, Rama, Varahi, and Krishna, and are known as the Dashavatara. Lord Vishnu is said to be the second god of the trinity which is the ‘preserver’ representing mercy and goodness. You are likely to find Lord Vishnu in his popular reclining pose while sleeping.

6. It is the place for Hindu Ritual

India is a land that is known for its religions. There is four major faith that you are likely to find in India. They include Hinduism, Buddhism, Jainism, and Sikhism, though Hinduism is dominant since it is practiced by 3/4 of the Indians. Therefore at Rani Ki Vav, there are 10 avatars of Vishnu paraded along a terrace wall at level three. It, therefore, shows the role of the stepwell as a place of Hindu ritual, thus making it a kind of subterranean temple.

7. It was built on the theme of incarnations of Lord Vishnu

Rani Ki Vav’s structure was divided into 7 levels and therefore the attractive sculptures were inspired by the different incarnations of Lord Vishnu. These incarnations are mostly seen once one reaches the water level, you are likely to find different carvings of Lord Vishnu. The intricate structure of the Vav is ornamented with more than 800 sculptures in all the galleries and most of which are usually dedicated to Lord Vishnu.

8. It has a tunnel that reaches Sidhpur

Like any other monument that has mystery, so is Rani Ki Vav. It has a tunnel that is beneath the last steps of the well.  There is a gat that leads to a 30m tunnel that opens to Sidhpur, which is a town close to Patan.

9. It is believed it had medicinal properties

It was believed back in 5 decades, that the water inside the stepwell was used to heal ailments as it had medicinal properties since it was surrounded by medicinal herbs. The water stored was used to cure viral fever and other ailments.

10. Declared as the ‘Cleanest Iconic Place’

At the Indian Sanitation Conference (INDOCIN),2016 at Vigyan Bhavna in New Delhi, Rani Ki Vav defeated other 10 iconic heritage across the country and was awarded as the cleanest iconic place. The monument and its surrounding are maintained by the ASI. This offers clean drinking water and proper sanitation to tourists.

The teams of the Ministry of Urban Development and Water & Sanitation visited 10 other heritage monuments in the country before they presented the award to Rani Ki Vav.