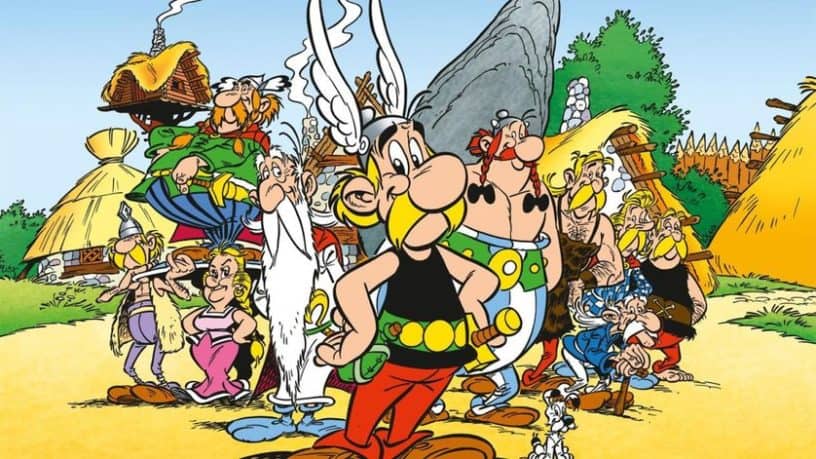 A little disclaimer first. Among those comics presented above, not all of them are a hundred percent French. Some of them are a bit Belgian but they were put in this article anyway because of the fact that all were written in French originally. 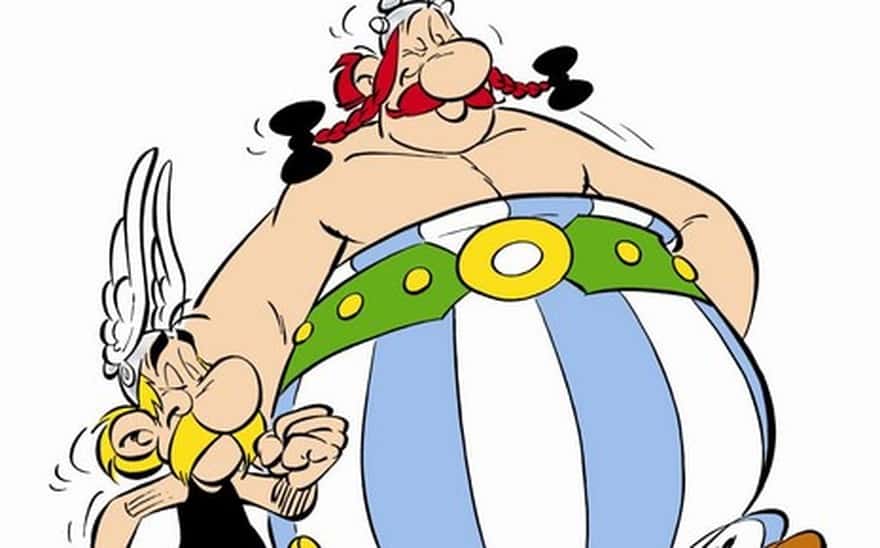 Asterix is a series of French comics created by the French scenarist René Goscinny and the French cartoonist Albert Uderzo. It first appeared in the Franch comics magazine Pilote in 1959.

This comic takes place in 50BC in a village of Gauls as they resist Roman occupation thanks to a special magic potion prepared by their druid Panoramix, which temporarily gives superhuman strength. The protagonists are the warrior Astérix and his best friend Obélix, a menhir sculptor and deliveryman. Together they are in charge of protecting their village against the Romans and helping anyone who needs help against the Roman Republic.

It is mainly a humorous comic as it is a parody of the contemporary French society through stereotypes of French regionalism as well as a description of foreign countries’ traditions.

The Asterix series is one of the most popular Franch comics in the world as it has been translated into 111 languages and 370 million copies of Asterix books have been sold worldwide. 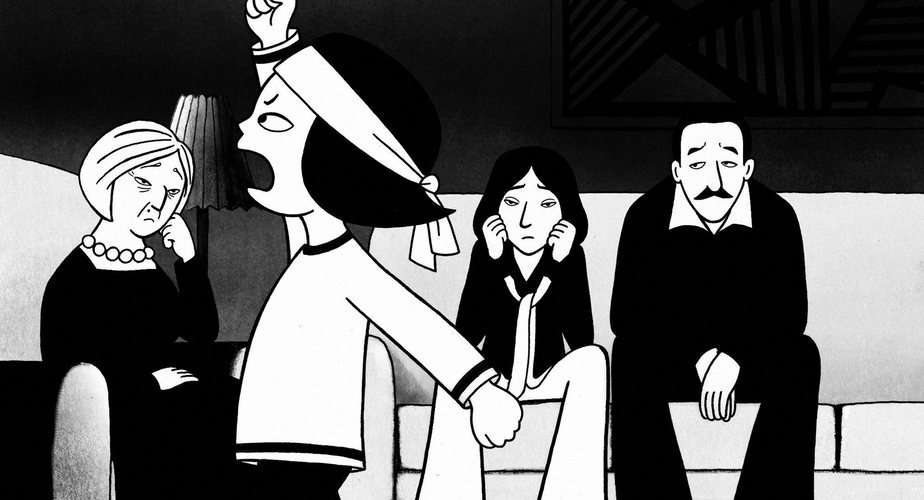 Persepolis is an autobiography written as a graphic novel and created by Marjane Satrapi. It depicts the main stages of the author’s life from her childhood in Teheran during the Islamic revolution to her difficult adaptation into her new European way of life.

This comic strip was published in four volumes between 2000 and 2003. It is both a historical testimony as well as a reflexion on personal identity and what it is to live in exile.

It has been a huge success in France and has turned Marjane Satrapi into one of the most famous authors of the country. It was also adapted into an animated movie in 2007 by Vincent Paronnaud together with the author herself. The film won the Jury Prize in Cannes despite drawing complaints from the Iranian government before its screening. 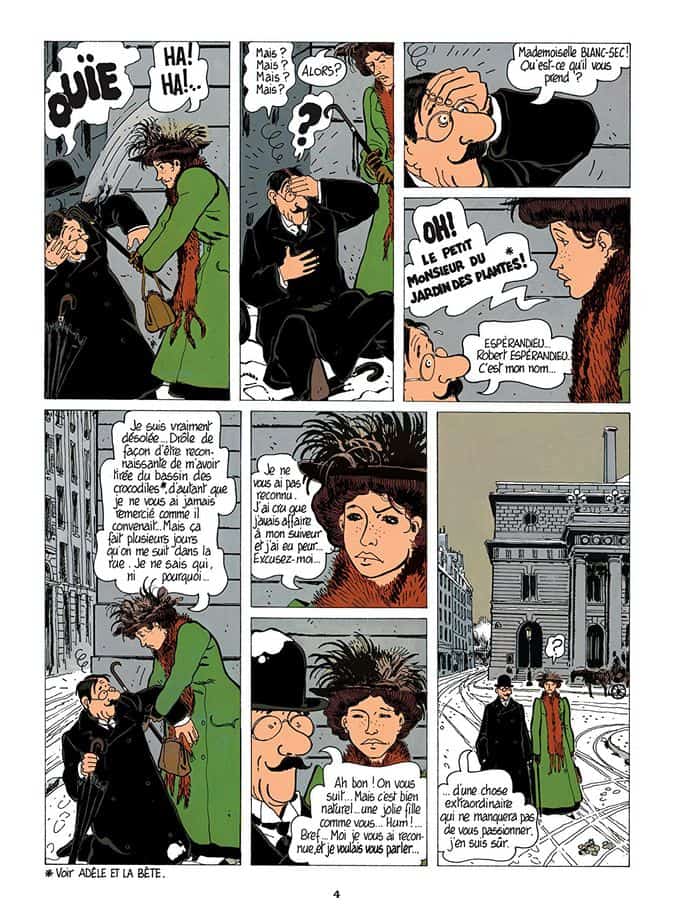 The title translates as The Extraordinary Adventures of Adèle Blanc-Sec. It is a historical fantasy comic book from the late 1970s written and illustrated by French comic artist Jacques Tardi.

The story is set in the early 20th century Paris and follows the adventures of the protagonist Adele Blanc-Sec on her different incredible adventures. She is herself a novelist of popular fiction who turns into an investigative journalist as her researches and adventures lead her to a mystical world of crime. She is one of a kind: violent, bossy, funny and always elegant.

The character of Adèle was created at a time when French comics showed an abundance of strong male protagonists. Women in a lead role used to be either oversexualized like Barbarella or pictured as ingenuous like Bécassine. It was Tardi’s intention to turn his heroine into a character equally the same as the other comics’ heroes, making her a member, at the time, of a new movement towards gender equality.

The Adventures of Tintin 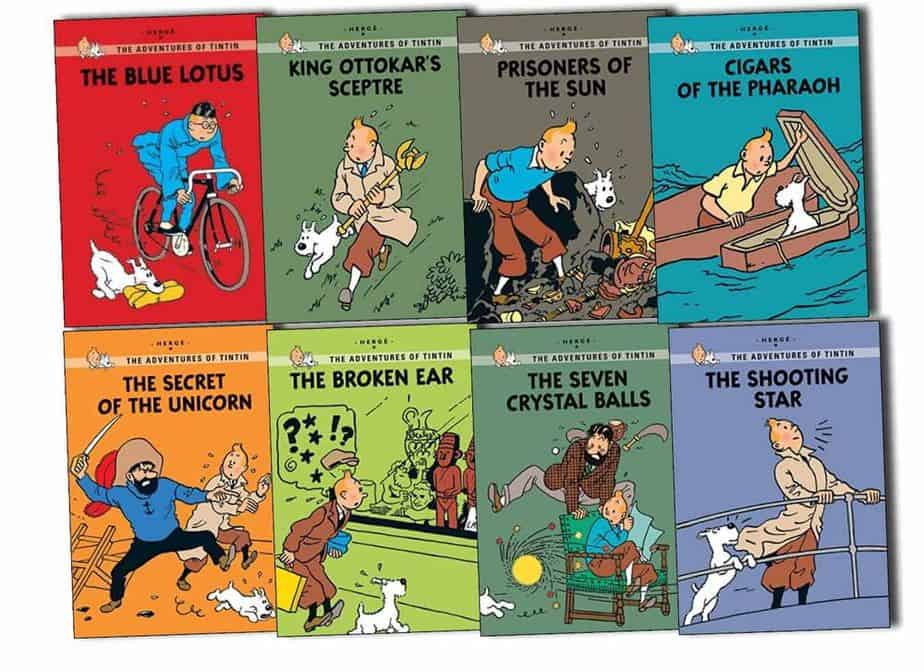 The Adventures of Tintin is a series of 24 comic albums created by Belgian cartoonist and scenarist Georges Remi. These ones count among the most popular European comic series of the twentieth century with over 230 million sold.

The story revolves around the character of Tintin, a young Belgian reporter traveling around the world. He is always accompanied by his fellow traveler, a dog called Snowy (the dog is called Milou in the original version). Over the different albums, you meet different other protagonists like the cynical Captain Haddock or Professor Calculus.

At a time when television didn’t exist, the international expeditions undertaken by the young reporter allowed young people to discover new cultures, countries, and ways of living. From the sands of the Sahara to the glaciers of the Himalayas, from the Amazon rainforests to the Scottish Highlands, there is no place in the world Tintin has not visited! 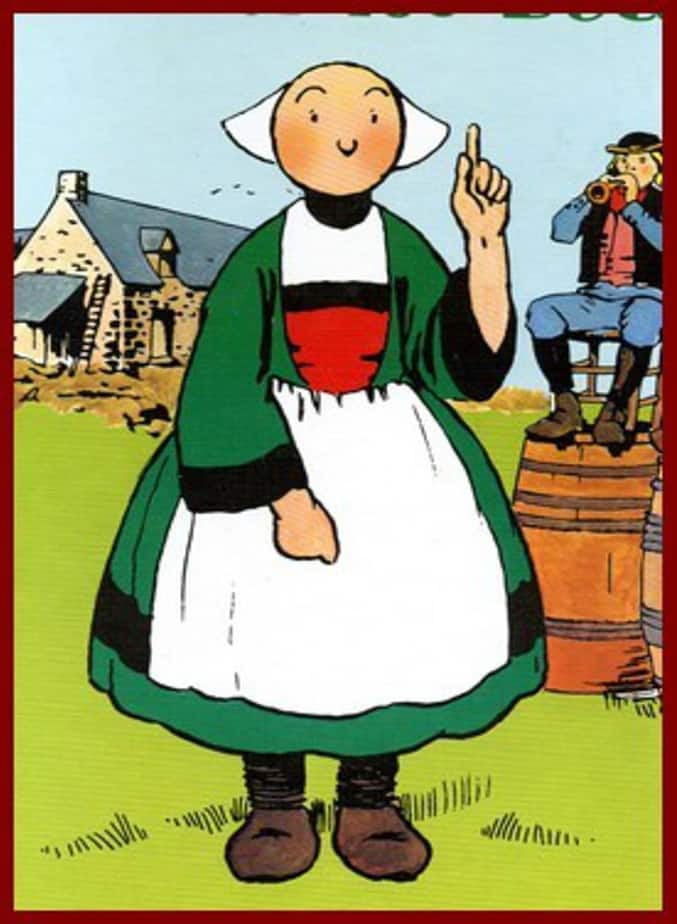 Becassine is 114 years old! She was born in 1905 in the French revue La Semaine. She comes from the imagination of the French writer Jacqueline Rivière and was drawn by Emile-Joseph Porhyre Pinchon. The most important thing that you could know about her is that she is the first female protagonist in the history of French comics! Becassine has become a very popular character throughout the years in France even though Bretons don’t really appreciate the retrograde way in which their region is depicted. They complain that she is a stereotype of the typical provincial girl seen through the eyes of refined city dwellers.

The heroine is a young Breton housemaid, usually portrayed as wearing a traditional Breton green dress with lace coiffe and clogs. But she is more than that. The writer gave her all sorts of liberties that women didn’t have at the time. She is audacious, she travels, she drives. We can say that she was a model of emancipation in showing that a woman could go beyond her only education and free herself. 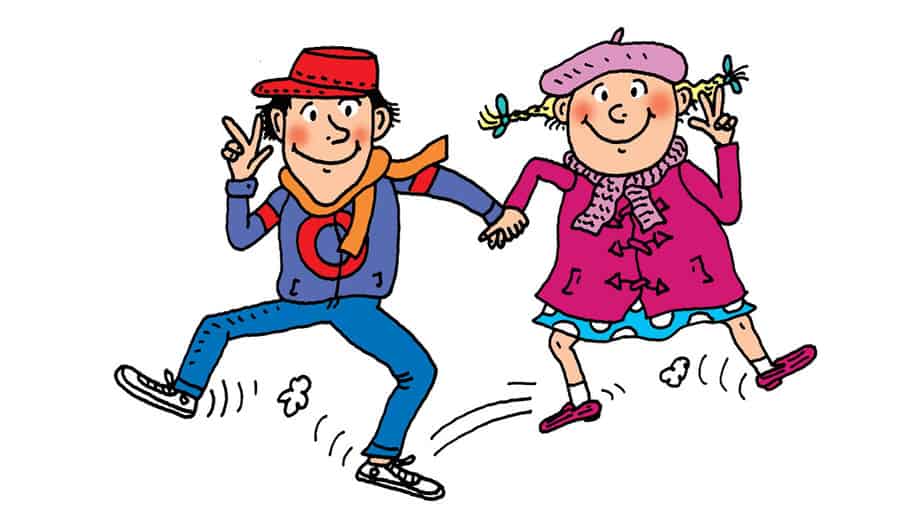 This one is a French comic series that has been published in the monthly magazine J’aime Lire since 1977. The initial authors of the series were writer Jacqueline Cohen and cartoonist Bernadette Després. They have been joined by artist Marylise Morel and author Evelyn Reberg.

The cartoon covers the life of the Dubouchon Family, owner of the restaurant À la Bonne Fourchette (The Good Fork) which is often troubled by the two youngest children of the family: Tom-Tom and Nana.

For a long time, the series has suffered from a lack of exposure until it gained success around 1995-2000 (during which time a TV cartoon was created). If the series used to be of two pages long it is now of one page only and is published pretty irregularly. 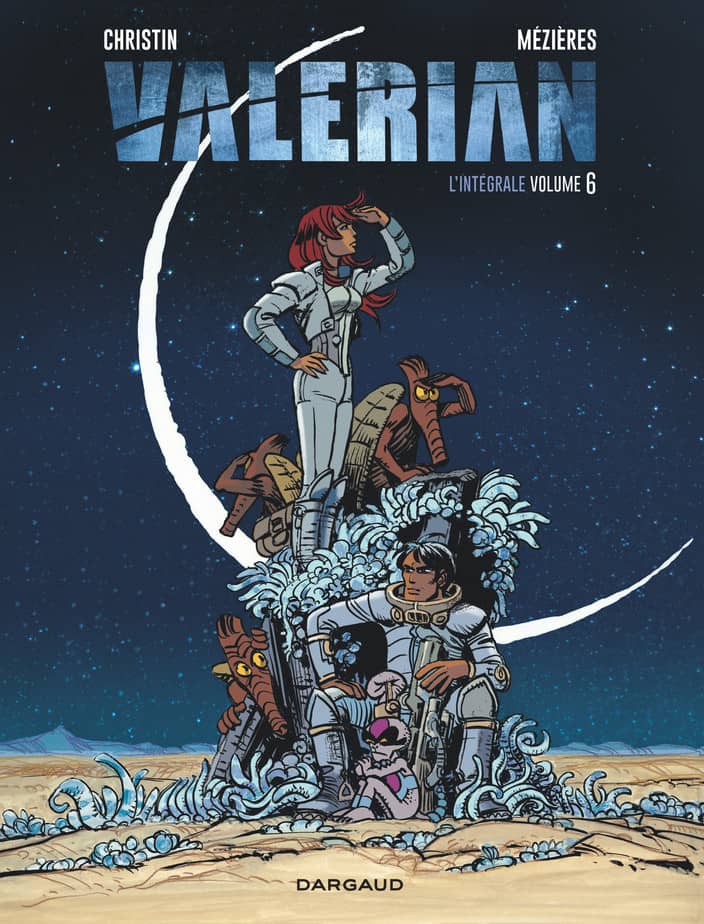 This one is a science fiction comic series created by Pierre Christin and Jean-Claude Mézières in the late 1970s. It focuses on the adventures of spatiotemporal agents Valérian and Laureline in the 28th century as they travel the universe through space and time.

This comic strip influenced many artists like film director like Georges Lucas (Star Wars) for example. It was also adapted for film by French director Luc Besson (Lucy) in 2014. 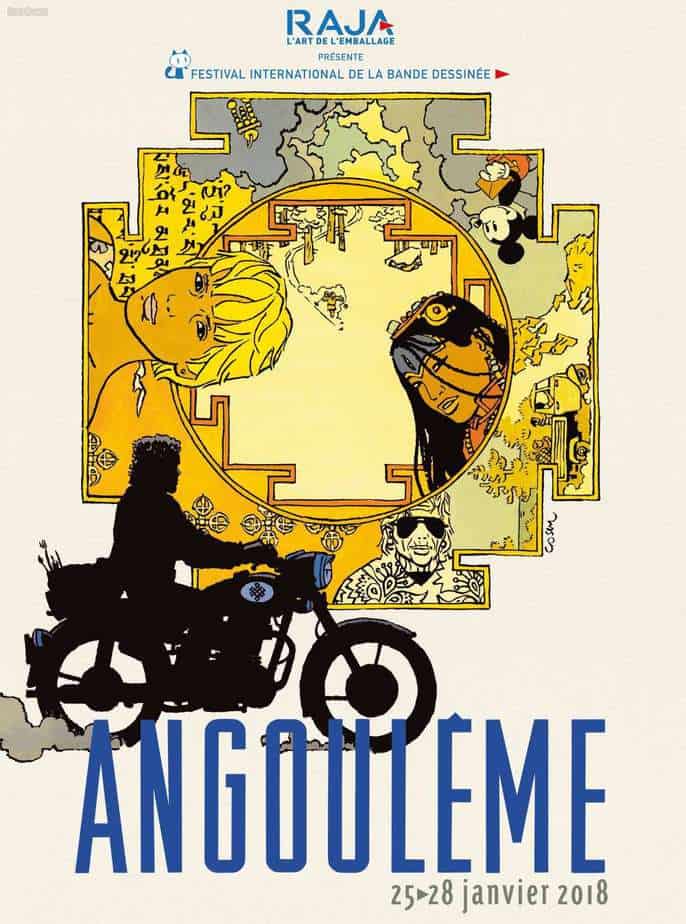 The Angoulême International Comics Festival was founded by French writers and editors Francis Groux, Jean Mardikian, and  Claude Moliterni. It is the second largest festival in Europe (the first one is in Italie). It is a four-day festival during which several prestigious prizes in cartooning are awarded.

The festival takes place around the end of January every year… Now that we have made sure that French comics strip represented a huge part of the world’s pop culture, on to you to discover, read and enjoy what they have to offer!