A Guide to Protests in Paris

A guide to protests in Paris

Gilets jaunes are the most recent demonstrations in Paris

Last Saturday, on a rainy day in late November, the Champs Élysées was set on fire. Black smoke and tear gas billowed up from the ignited barricades that blocked Paris’s largest boulevard, bringing traffic to a standstill. Surging through the streets and marching on top of these makeshift barricades were thousands of protesters known as the gilets jaunes (yellow vests). 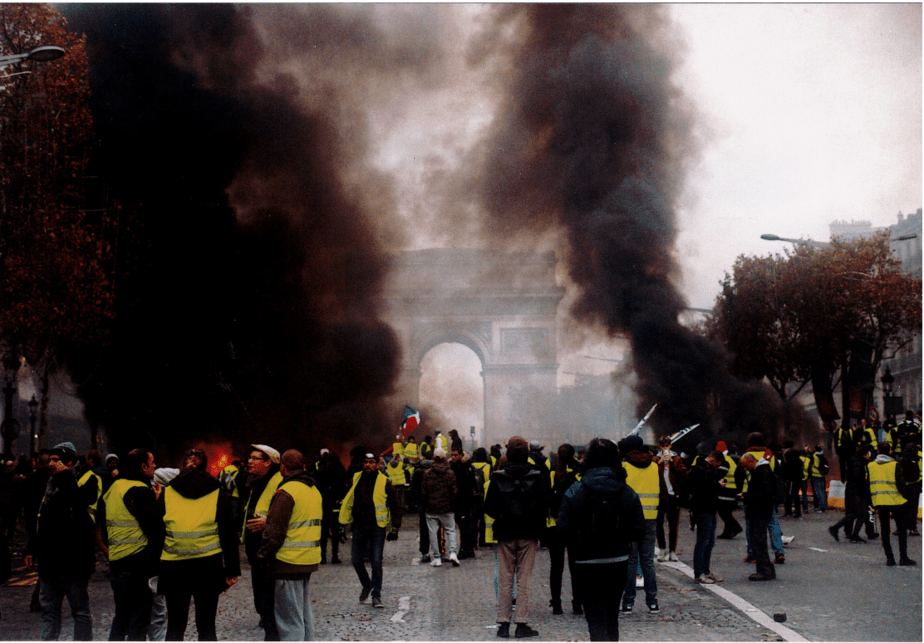 Triggered by the rise in fuel tax, protesters have come to Paris from all parts of France to take part in the gilets jaunes demonstrations, in what is now a movement that far exceeds the original spark. It has become an outcry from the poor and lower middle class against inequality, the current president Macron, and the widening gap between the wealthy and the forgotten. 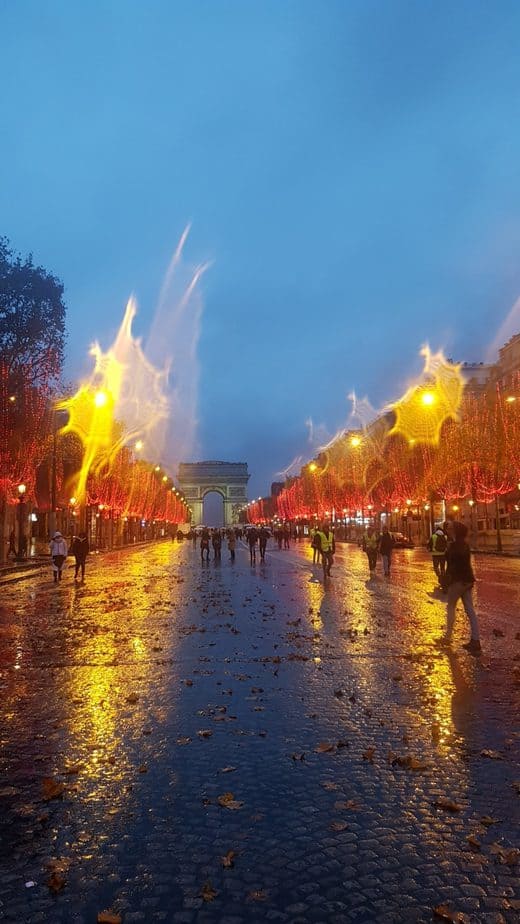 The Champs Élysées during the protests

The gilets jaunes demonstration is the second protest I have attended since living in France. As a foreigner, I am wary of interfering in the politics of other countries and, therefore, I spent my time milling about the outskirts of the demonstration, watching from the sidelines.

It proved lucky, because, soon after my arrival, riot police (trained specifically for this purpose) began to swarm the boulevard, armed with batons, teargas and water cannons, clashing with protesters in what has been called the some of the most violent demonstrations in Paris for decades.

The long history of civil unrest in France

Strikes and demonstration have always been prevalent in french culture. Since the french revolution, which primarily started as a mass demonstration against the high tax on salt, the French have always used protests and street movement as one of the main ways in which they express their political opinion.

After the overturning of the Le Chapelier Law in 1791, unions have also handed mass support to strikes and demonstrations. 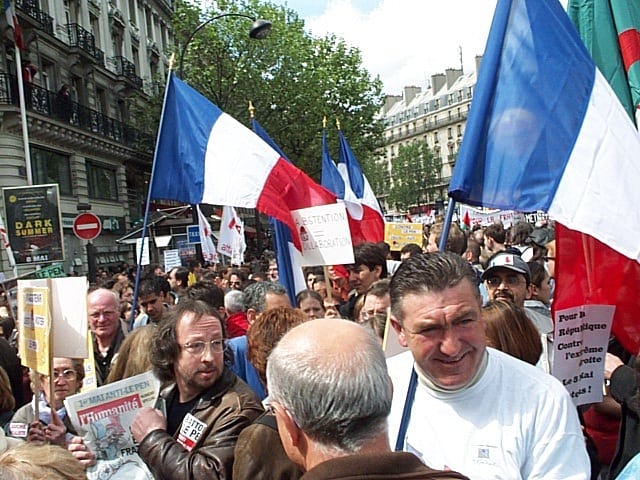 In 1936, the Front Populaire won legislative election as a coalition of left wing parties. The Front Populaire is remembered fondly by the people of France thanks to the enactment of labour laws that include paid vacation, limiting work to 40 hours a week, and the legal right to strike.

This was followed by a series of strikes known as Les Greves de la Joie (the strikes of happiness) where workers gathered around factories and businesses while singing and dancing.

If you are coming to Paris to see the Eiffel Tower, the church of Montmartre or the beautiful area of Le Marais, there is a possibility that you may also witness one of the various forms of demonstrations taking place within the city of Paris.

However, if you want to avoid the congestion of an upcoming demonstration, we recommend steering clear of prominent protest areas, such as Place de la Republique and Nation. The left bank is guaranteed to offer peace and quiet. Discover our free walking tour of the Latin Quarter

While demonstrations are relatively common place in Paris, not all protests carry the stigma of violence that the more recent gilets jaunes movement does.

In the summer of this year, rail workers from the french train company SNCF went on strike against president Macron’s attempt to roll back job security policies. While ultimately proving futile, the strikes reeked havoc on both citizens trying to commute to work and tourists venturing out of Paris to visit the countryside of France. 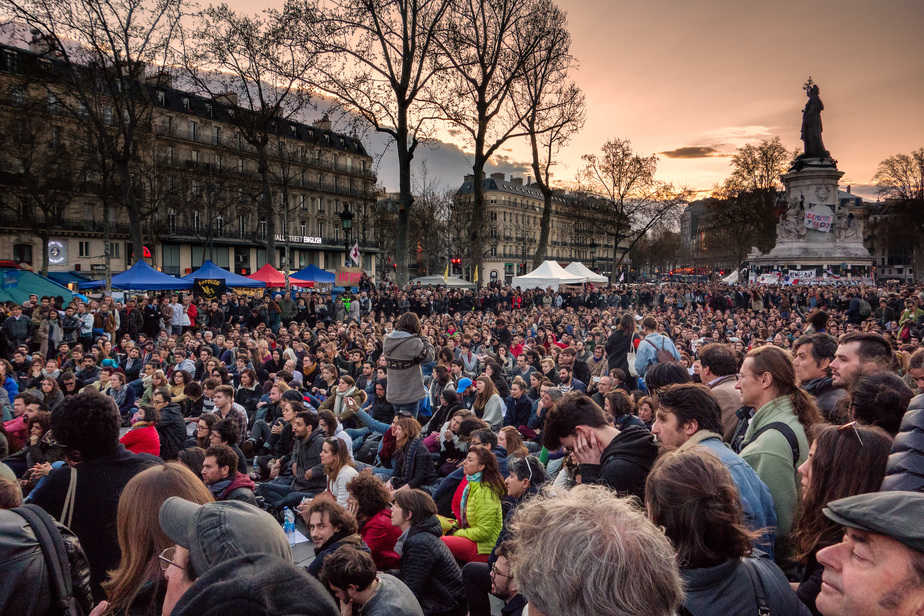 Another more recent example of a popular social movement in Paris that led to wide reaching demonstrations was the Nuit Debout movement. In 2016, protesters gathered around Place de la République and held overnight assemblies.

Like the gilets jaunes  movement, the original themes of these demonstrations were left relatively open-ended. Protesters marched for everything from universal basic income to the gender pay gap.

Ways in which Parisians protest

While there can be violence, the majority of french demonstrators are peaceful and vaguely resemble outdoor parties. The first protest I attended was for the french SNCF rail workers and I was instantly taken by the spirit of the demonstrations. Some protesters were singing songs and marching through streets with puppets and signs, while others were staked out on the ground with beers and friends. 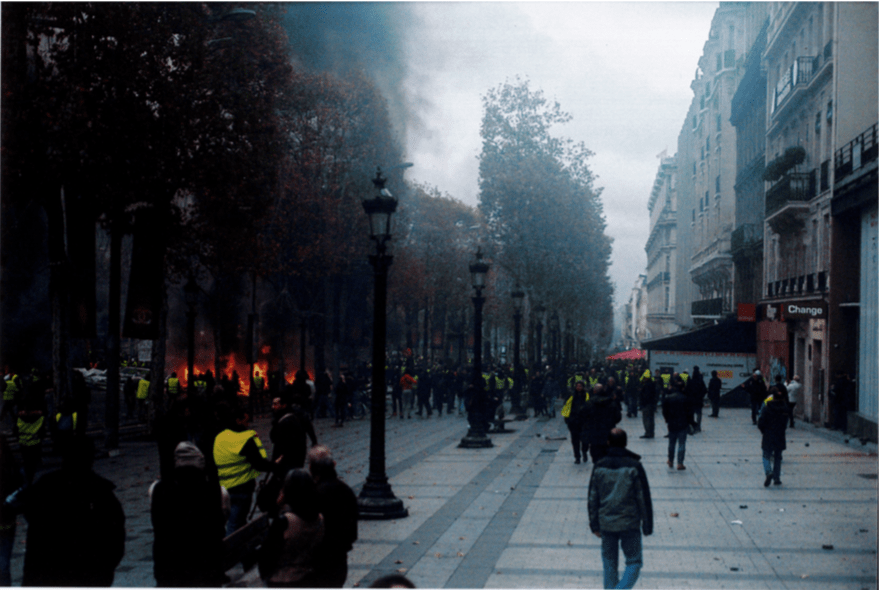 Parisian protests usually begin near the eastern part of Paris. The demonstrations sweep through the grand boulevards and filter out into one of the large plazas of Paris, such as Nation or Bastille.

From the outside, these groups may appear to be an unorganized congregation of protesters, but, in reality, it is broken up between specific unions or certain political parties, depending on the source of the movement.

While walking around, you are likely to hear music. Most commonly sung by French demonstrators is the Italian revolutionary song “Bella Ciao.” The catchy tune and rebellious rhythm keeps the protesters moving onwards.

The future of the gilets jaunes movement

After the riot police had reclaimed the Champs Élysées and began stifling the fires of the afternoon, the gilets jaunes protesters spread out to the smaller roads surrounding the Arc de Triomphe. They repeated the same process of building barricades, protesting, and then, inevitably, being overrun by the police.

I decided that after nearly three hours of running from the impending clouds of tear gas that I’d had enough and it was time for me to return to my smokeless apartment before it got too dark. Many of the metro lines, however, were closed for security reasons so I was forced to take the city bikes across the river and back home to the left bank. 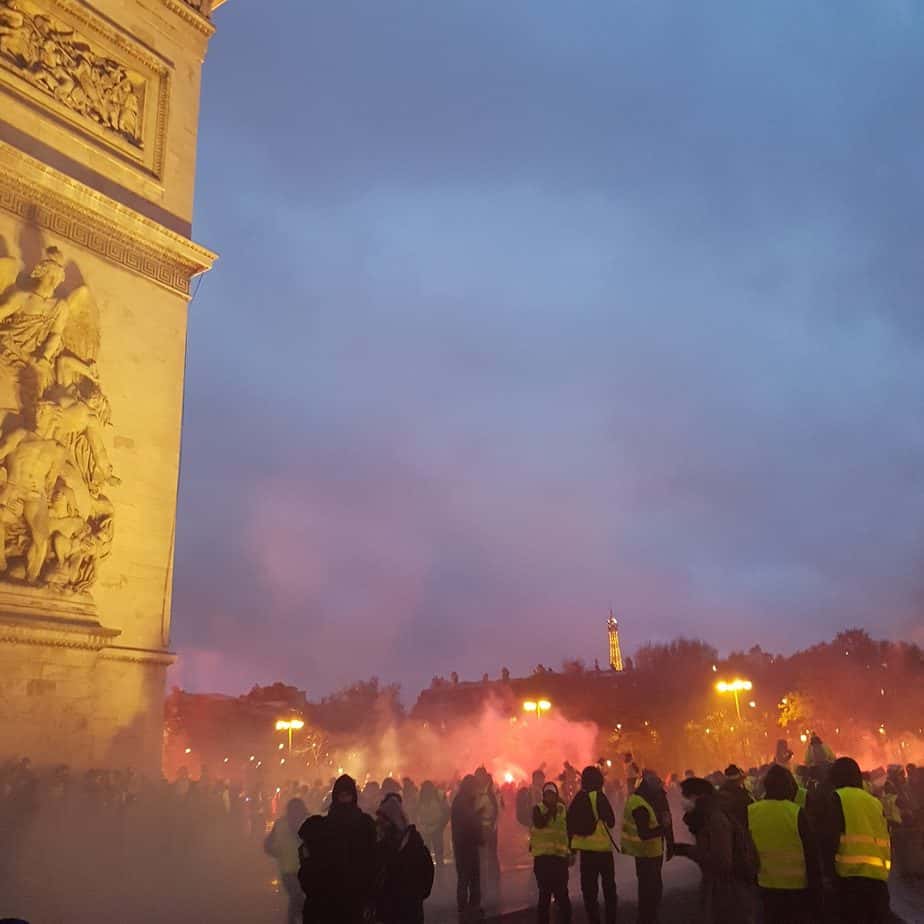 As I rode through the twinkling christmas lights and smashed shop windows that lined the streets around Place de Madeleine, I was stung by a whiff of teargas and the smell of smoke. I watched as a group of police officers began to block the oncoming traffic while riot police commenced to march in the direction of the rising smoke.

Still trying to find my way back home, I asked the nearest police officer if I could reach the river by taking the now blocked boulevard. He told me to turn around and find another way. I asked him what was going on over there, behind the shields of riot police and the glowing, red haze of fires. “C’est la guerre,” he said to me.