French Riviera: Top 10 things to do on the Côte d’Azur 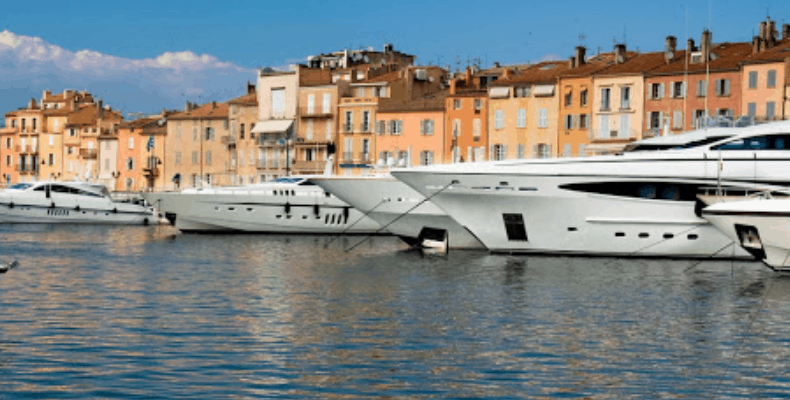 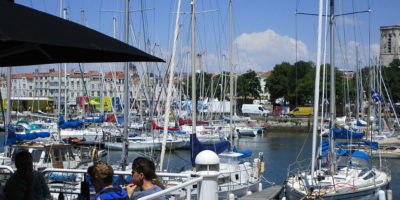 French Riviera: Top 10 things to do on the Côte d’Azur

The gorgeous French Riviera snakes along the country’s southeastern Mediterranean coast from Cassis in the West to Menton near the Italian border. Thanks to its Mediterranean climate and incredible beaches, the Côte d’Azur is one of the country’s most popular holiday destinations.

A glamorous vacation spot since the 1700s, today the French Riviera is still known for its exclusive beach stations, star-studded film festivals, and mega yachts.But with so much to see and do, it can be hard to navigate all the options. Well, I’ve narrowed down the best of the French Riviera in this article. Here’s a guide to the top 10 things to do on the Côte d’Azur.

1. Stroll along the Promenade de la Croisette in Cannes 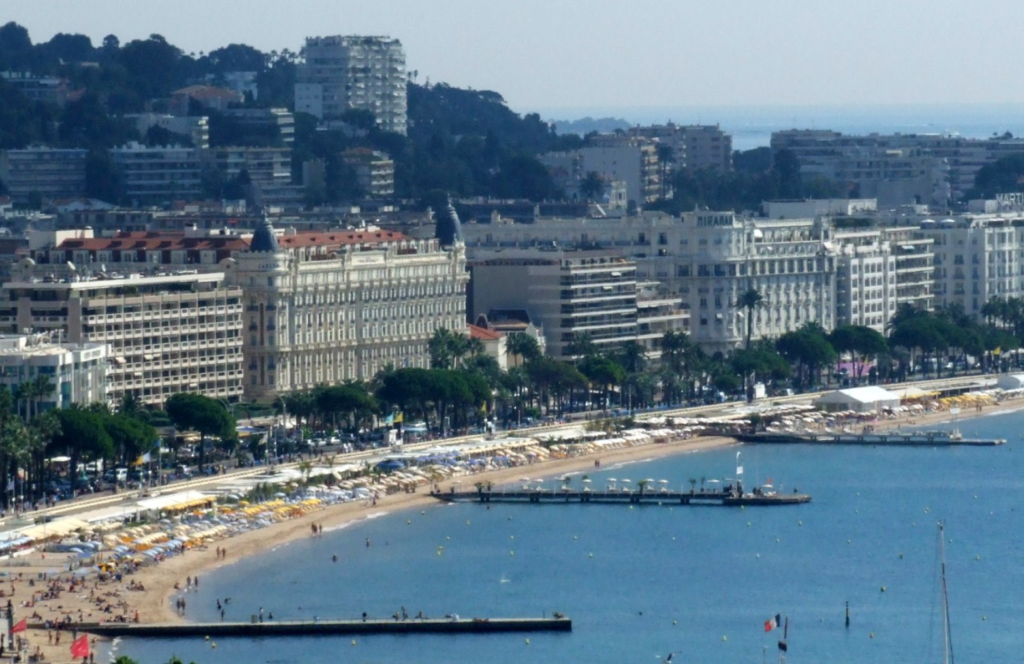 The coastal city of Cannes is most famous for its glitzy annual film festival, which draws A-Listers from all over the globe.  The Promenade de la Croisette is a picturesque boardwalk running the two kilometers all along the Cannes beachfront.

The Promenade is lined with upscale boutiques, fancy restaurants and of course, the Palais des Festivals, where the Cannes film festival is held. So if you’ve always dreamed of marching up the red carpet in Cannes, this is your chance!

2. See the places that inspired the Impressionists 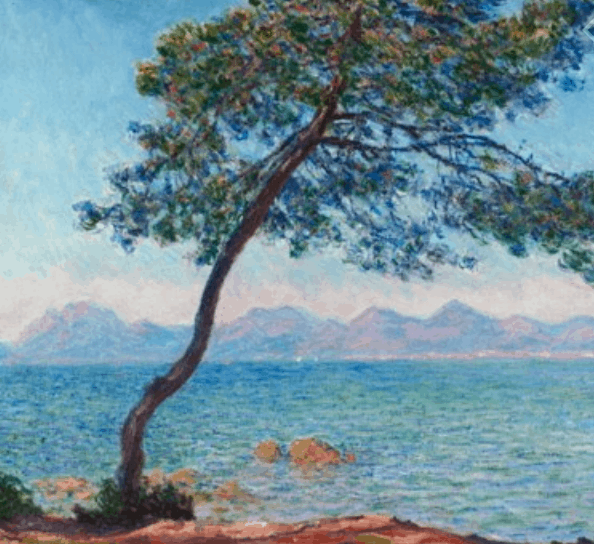 Any Impressionist art fans out there? Well, you’re in luck! The French Riviera was a popular spot for some of the better known painters and artists of the time. During the late 1800s, many wealthy vacationers commissioned personal pieces from some of the most famous artists, which helped support the artist community and led many artists to set up a residence there.

Matisse, Picasso, Cezanne, Monet, and many more once lived and worked on the Côte d’Azur. Impressionist painters were inspired to capture the southern sunlight, and the laid back Mediterranean climate there.

Today, you can visit many of the landscapes immortalized in Impressionist works. For example, Vincent Van Gogh’s former home and studio is located in the charming town Arles while the village of Cagnes-sur-Mer captured Renoir’s heart. And if you’re hungry for more, don’t miss the Matisse Museum in Nice or the Picasso Museum in Antibes.

3. Go for a picturesque hike along the Chemin du Calvaire

The landscape along the French Riviera is absolutely stunning. Crystal blue seas meet jagged cliffs and gorgeous sandy beaches that will make you want to stay all day. But if you really want to discover the beauty of Côte d’Azur, you’ll want to hike along the Chemin du Calvaire in Antibes.

The hiking path leads along the Antibes coastline, through an ancient village, around a lighthouse  and up to a viewpoint. From the top, you’ll be treated to stunning 360 degree views of the sea and city below. Overall, the hike is rated as moderate, and will take about two hours. And don’t forget your hiking shoes! 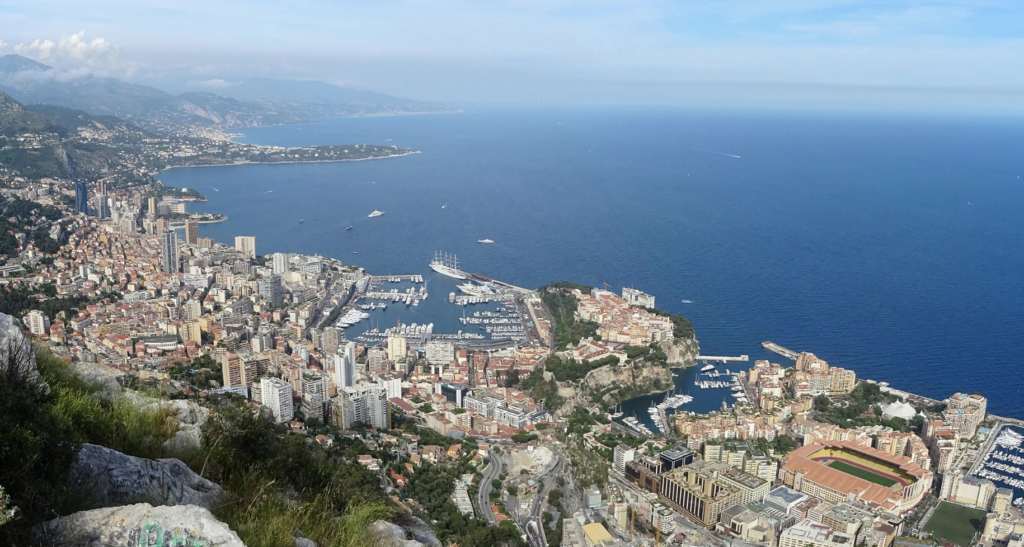 No trip to the French Riviera would be complete without a visit to Monaco. The Principality of Monaco is actually the world’s second smallest country; only losing out to the tiny Vatican City. Monaco is small. Really small. The country covers just over two square kilometers along the mountainous Mediterranean coast! But despite being small in size, Monaco has its own flag, language and government (although French is widely spoken).

The word Monaco probably conjures up images of Monte-Carlo; the famous casino, luxury boutiques and the famous Grand Prix. Overall, Monaco is one of the wealthiest countries in the world in terms of GDP per capita, so it’s no surprise this place draws in wealthy crowds. If you want a taste of this glitz and glam, head to Monaco for the day. You can try your luck at the famous Monte-Carlo casino and head off for a day of shopping in La Condamine district.

Are you a racing fan? If so, you’ll want to plan your trip around the prestigious Monaco Grand Prix. This exclusive Formula 1 race takes place every year in May or June, but be sure to grab your tickets in advance.

5. Enjoy some shopping on the Promenade des Anglais 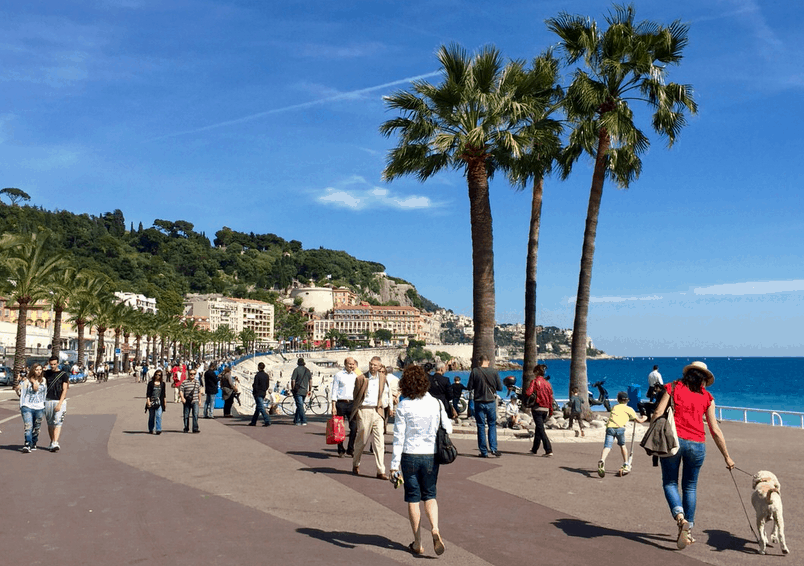 Perhaps the most famous stretch of seafront in France, the Promenade des Anglais is a must-see when in Nice. The seen kilometer promenade is lined with shops, restaurants, and even historic landmarks like the Hôtel Negresco. And one of the best ways to experience this boardwalk is on two wheels. You can skate, scooter or bike along the promenade while enjoying some amazing sea vistas.

The picturesque promenade stretches along the coast, running from the city’s outer edges to the Old Town. And most of all, the promenade and the surrounding area is a great place to do some shopping. For exclusive shops and designer fashion, head to the Rue de la France, just parallel to the promenade. Here you’ll find every brand you could imagine from Chanel to Louis Vuitton and Balenciaga. Get ready to shop ’til you drop.

6. Catch some sun on the Plage de Pampellone 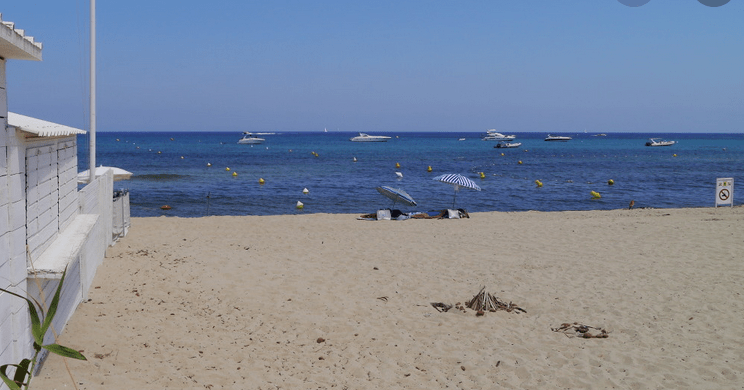 If you’re visiting the French Riviera, there’s no shortage of stunning beaches to choose from. But thanks to the 1956 film And God created woman with Brigitte Bardot, the Plage de Pampellone is the Côte d’Azur’s most iconic. The movie was filmed on the beach, and partially in the exclusive nightclub Club 55. Met with international success, the film made the Plage de Pampellone a real jet-set destination for decades.

Just a quick hop from Saint-Tropez, the beach boasts miles of Mediterranean coastline and pristine white sand beaches. And while the iconic clubs and patrons have changed today, it is still very much a beach to see and be seen. The calm waters make it great for swimming, or simply catching some  of that southern French sunshine.

From Saint-Tropez, you can reach the beach in less than ten minutes by car. If you’re not driving, there’s a shuttle bus that runs the 5km between the two with services a couple times per hour.

7. Take in the views from Mount Faron 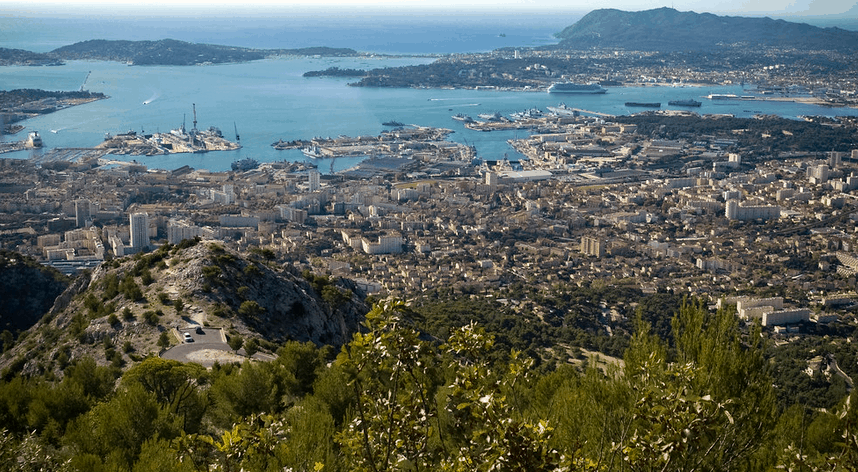 The town of charming town of Toulon is considered one of the Westernmost places in the whole Côte d’Azur region. The coastal town center’s cobblestone streets lead you by ancient fortresses and classic Belle Epoque façades on the way to the busting Old Port. If you’re in the area, Toulon is definitely worth a stop.

But in my opinion, Toulon’s best asset actually lies outside the city center. Mount Faron stands 584 meters high and is located just outside the city. You can take a scenic cable car ride up the mountain and enjoy the splendid panoramic views from the peak. The sweeping views cover the town of Toulon, the Mediterranean beyond, and you can even spot the Paul Ricard islands in the distance.

8. Marvel at the mega yachts of Saint-Tropez

Besides shopping and beach hopping, the resort town of Saint-Tropez has plenty to offer in terms of luxury. And this Côte d’Azur port is famously home to some of the world’s most impressive mega yachts. Multiple stories high, these yachts are more like floating palaces. Complete with perfectly dapper crews and beautiful life boats that overshadow any boat I’ve ever been on, these aren’t your run of the mill boat show vessels.

These enormous boats line the harbor, showcasing the glitz and glam Saint-Tropez is know for. Stroll along the boardwalk to admire the view, it seems to get more impressive with each step.

9. Chill out on the Paul Ricard Islands 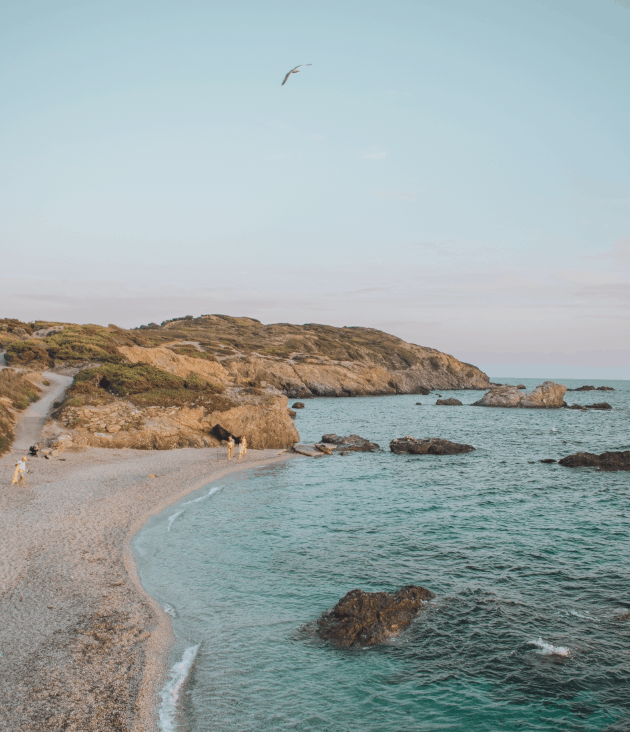 The French Riviera tends to get crowded during the summer months, especially in August. But if you want to escape the crowds, head to the Paul Ricard Islands. Just off the coast of Hyères or Six-Four-Les-Plages, these chilled out islands are a slice of a paradise just within reach.

You can get to the islands via ferry, or personal boat from either Hyères or Six-Four-Les-Plages. The journey takes around twenty minutes, but is absolutely beautiful. There are three main islands, but my favorite was the Ile des Embiez. Once you’re on the island, you’ll be treated to secluded bays, turquoise waters and a real low key lifestyle. There are no cars allowed on the island which helps add to the sense of serenity, but it’s great for cyclists and hikers.

10. Explore the many Villes Fleuris 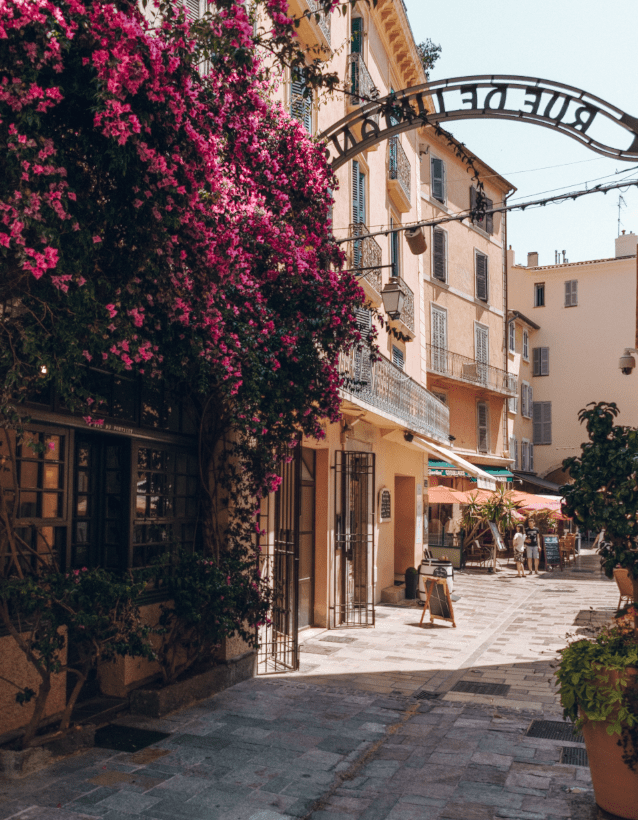 One of the top 10 things to do on the Côte d’Azur is to visit the Ville Fleurie, or blooming cities. Each city and town in France can be awarded the title of Ville Fleurie, depending on the flowers and plants on display around the city. They are rated on a scale of one to four, but with flowers instead of stars.

On the Côte d’Azur, it seems every town is more beautiful than the last, decorated with blooming hydrangeas, lilacs, jasmine and Bougainvillea. And if you’re trying to decide where to stop, there’s usually a  road sign with each town’s rating on the way into the city center. Some personal favorites include Hyères, Sartoux, Grasse, and Castellane.