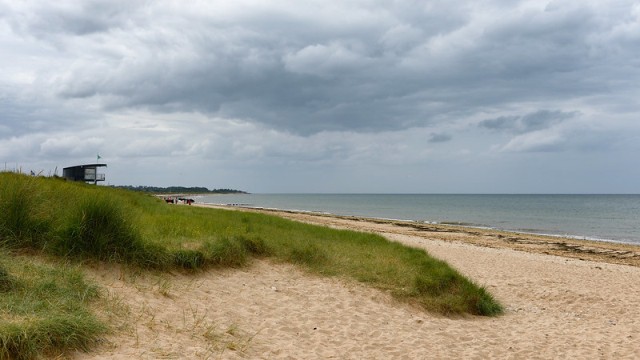 Visiting the D-Day landing beaches of Normandy is a memorable trip. I will warn you that it is a somber experience, and you may shed a few tears (guilty), but I think that it is something that everyone should do once in their lives, if given the opportunity.

D-Day marked the beginning of the end of World War II in Europe. On June 6, 1944, tens of thousands of American, British and Canadian soldiers stormed the beaches of the French shore in an attempt to win back the Western front from the German troops.

After many casualties and lives lost, the D-Day landings paved the way towards the end of WWII. Today, there are several museums, memorials and cemeteries line the beaches in memory of the brave soldiers that lost their lives.

If you’re planning a trip to the D-Day Beaches, take a look at my suggestions below to get started. There is a lot of ground to cover, so you’ll want to have a plan if you want to see as much as you can. Keep reading for my list of the 6 best D-Day landing beaches to visit in Normandy!

1. Omaha Beach and the American Cemetery 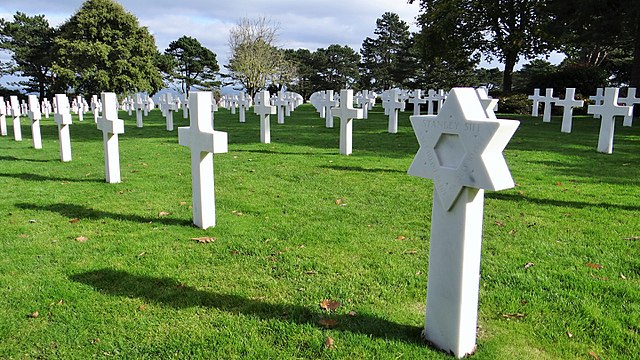 Omaha Beach in located in the Normandy town Colleville-sur-Mer, and it is also home to the American Cemetery. Many Americans lost their lives on Omaha Beach, and in fact, the entire D-Day operation was almost lost here as well.

On June 5, the Allies attempted to break through the Atlantic Wall, a system of defence that was installed by the Germans to keep the Allies out. The troops were unable to destroy as much as the wall as they wanted to, so things were already off to a rough start.

Then, the support tanks that were installed in the ocean to help the Allies were positioned way too far away from the shore to be of any good. The American troops that rushed towards the shores of Omaha Beach were met with gun fire from the Germans, resulting in 2,300 casualties and 1,800 deaths.

Here, at the cemetery, you can pay tribute to the several lives lost on D-Day, especially the American soldiers that perished. There is also a visitor’s center with more information about the events of June 6, with free guided tours available.

Utah Beach is another location in Normandy that was stormed by American troops. At Utah Beach, things went much more smoothly with just 150 wounded soldiers and 50 dead. A stroke of luck caused the troops to land 2 kilometres away from their target, and into a much less densely defended area.

As a memorial, there is a museum at Utah Beach which maps out the events of June 6. You’ll be able to follow a chronological retelling of the day and see where the soldiers were positioned.

There is also an authentic B-26 bomber airplane in the museum which is really impressive to see in person. There is also a moving video called Victory Beach, with testimonials from war veterans in which they talk about their experiences on Utah Beach. 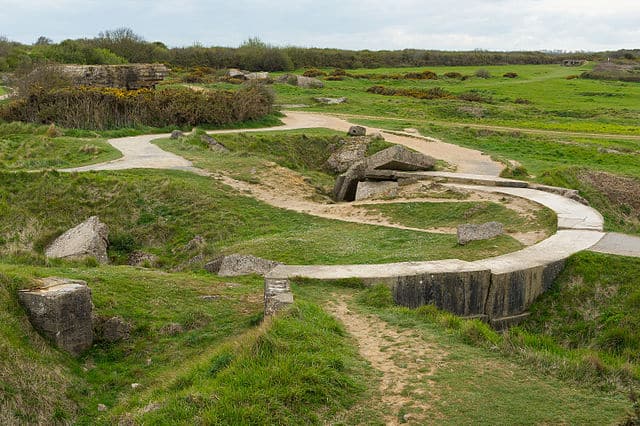 Close-up of the battlefield of the Pointe du Hoc, Calvados, Normandy, France by Jebulon – WikiCommons

La Pointe du Hoc is an impressive site which still bears the marks of D-Day. You can see bomb craters, crumbling foundations and large bunkers which line the cliffs. This point is the highest cliff between Omaha and Utah Beaches, and German forces took advantage of the height to fire down on Allied troops.

La Pointe du Hoc was never cleaned up after D-Day, and it was named an official war grave for the soldiers that lost their lives there. Since it is a grave, its important to remain somber and respectful if you visit this Normandy landing beach. 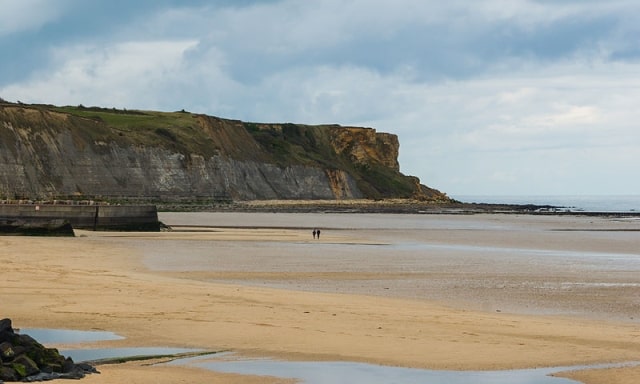 In an attempt to surprise the Germans, the Allied troops planned to land on Gold Beach in Arromanches, Normandy. This stretch of beach was sandy and filled with swamps, and would therefore be extremely difficult to land on.

In order to land here, the Allied troops needed to bring in an artificial port. In 1943, Winston Churchill called for the construction of these concrete ports on Great Britain. They were dubbed Mulberries, and the harbor would go on to be called Mulberry Harbor.

The British forces that landed here were met with heavy fire, but they pushed ahead and rolled ashore. Many lives were lost, and today you can visit the beach to pay homage as well as the D-Day Museum.

Canadian Allied forces lost nearly half of their troops within the first few hours of D-Day. But, they did have the most success when it came to distance. The Canadian troops that landed on Juno Beach got the farthest inland of any of the 5 landing sites by the end of the day on June 6.

The Juno Beach Centre is the only Canadian Museum in Normandy. Here, you’ll find a different perspective of WWII, one told from the Canadian side! 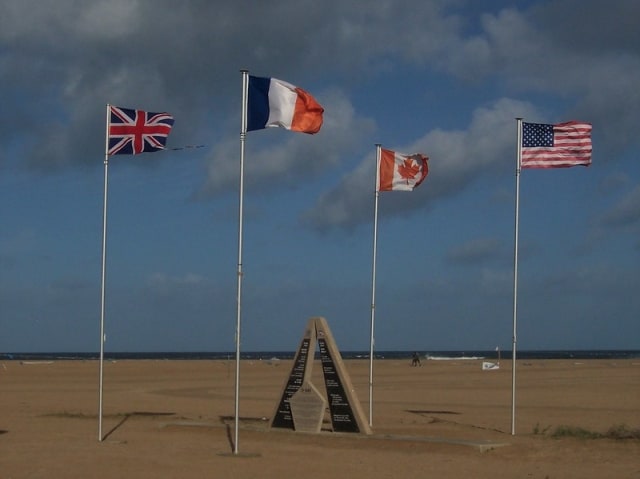 In the hopes of blocking Allied forces, the Germans had constructed what they called the Atlantic Wall, and which consisted of armed bunkers, mines and tank traps. The Atlantic Wall was perhaps its strongest at Sword Beach.

The objective for landing on Sword Beach was to liberate the town of Caen, which was under German control. The troops weren’t able to immediately liberate Caen, but within the first few hours of June 6, the seat of the German command force had been taken over by the French.

The German Fire Control post was also taken by the Allies on June 9th, and today it is home to one of the most authentic museums in Normandy. Inside the bunker, there is an accurate recreation of what the bunker looked like in 1944. There are 6 floors, including the observational look out which features a 360° view of Sword Beach.

Save this article for your next trip to Normandy so that you know you’ll see all of the most important landing beaches! As I mentioned, it is a visit that involves a lot of reflection, but it is a must-do for anyone who is interested in history (and even for those that aren’t!).

Getting from Paris to Normandy is very simple and straightforward. If you’re in Paris for an extended amount of time, or if it isn’t your first trip to France I would recommend you set aside a few days to explore.

And, if you are in Paris, we’d love to see you. Click here to learn more about our walking tour options!