10 Best Things To Do on Your Birthday in Nice, French Riviera 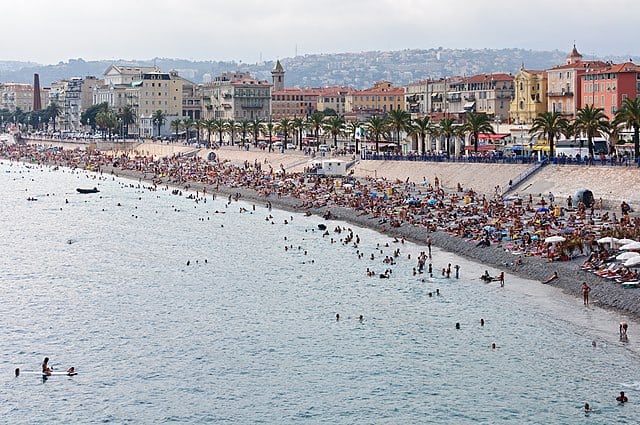 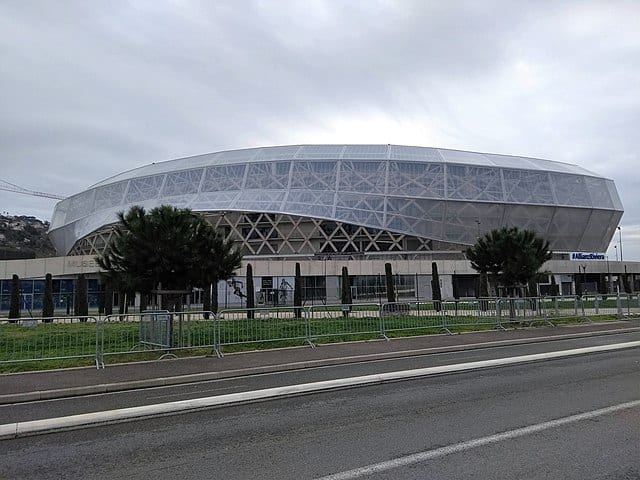 Allianz Riviera in Nice, France, with its wooden structure under an ETFE membrane. Photo by Patrick Janicek – Wikimedia Commons

10 Best Things To Do on Your Birthday in Nice, French Riviera

With its history and so many Italian influences on its culture, food, and art, often a visit to   Nice feels like a visit to Italy. Whether you visit for a short weekend trip or have many days to spend exploring this side of the French Riviera, here are the top things to do in Nice.

Below are some of the best things to do on your birthday in Nice, French Riviera.

1. Stroll Along the Promenade des Anglais as its views are amazing 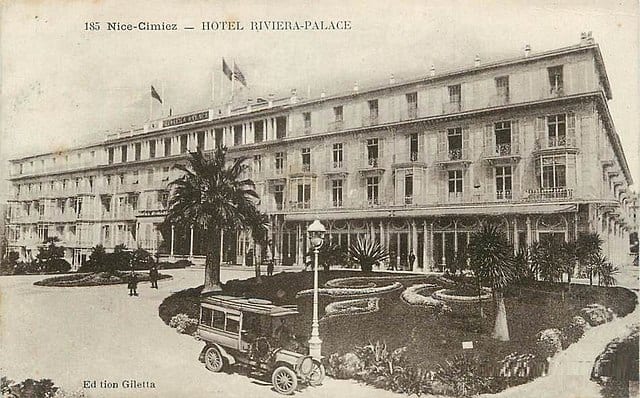 A 7 km (4 miles) stretch of road along the beachfront in Nice, the Promenade des Anglais or La Prom in short was built in 1820. The building of the promenade was funded by Reverend Lewis Way and the parishioners of the Holy Trinity Anglican Church.

The main reason for building the promenade was for the use of the English who holidayed there. It was called Camin des Anglés or the English Way in the Nicois dialect.

La Promenade des Anglais has stood the test of time and is now a popular place for strolls or picnics, and there are even special lanes for riding bikes or skateboarding.

The views of the promenade are amazing from the luxurious Hotel Negresco which itself is a landmark built-in 1912.

2. Enjoy the Beach as it is a rocky area with stone steps and iron ladders leading down to the water 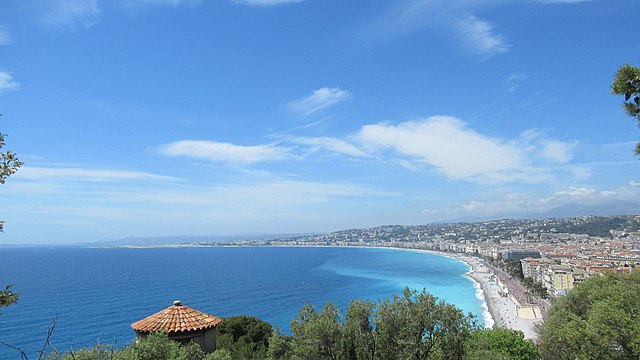 You can’t stay in a town on the French Riviera and not spend a day enjoying some sun. The beaches in France are some of the best in the world, and Nice is no exception.

With amazing views of the Bay of Angels, the Plage de la Réserve is a rocky beach frequented by locals. The infamous Coco Beach isn’t really a beach.

It’s a rocky area with stone steps and iron ladders leading down to the water that’s perfect for swimming or snorkeling.

Le Voilier Plage and Carras Beach are good public beaches. Opera Plage, Plage Riveau Beach, Castel Beach, Ruhl Beach, Le Galet, and Blue Beach are some privately owned beaches that you can use if you visit their restaurants.

If you are renting a car in France, another beach a short drive from Nice that is a must-visit is the Plage des Marinières in Villefranche-sur-Mer. Visible from the train track that runs right behind it, this sandy beach is surrounded by beautiful trees and a blue harbor. 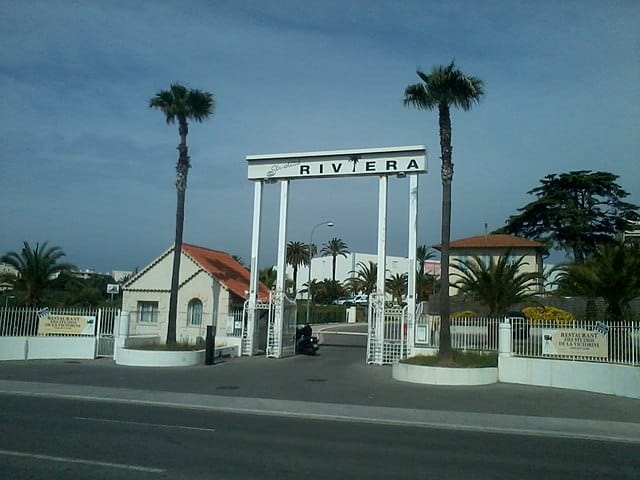 The entrance to Riviera Studios in Nice, France. Photo by HenrikKbh – Wikimedia Commons

They are a lot of kids playing in the local fountain, others dancing, and all of this was ‘observed’ by statues of naked men sitting on pillars above the square.

A short walk from Old Town and the Promenade des Anglais, the square is named after Andre Massena, the Duke of Rivoli who was called l’Enfant chéri de la Victoire (the Dear Child of Victory) because of his illustrious career in Napoleon’s army.

Designed by Joseph Vernier in 1843, the square is lined with palm trees and is the spot where most public celebrations and events are held.

4. Take a Food Tour as it is a nice convenient way to sample a lot of different dishes at amazing locations 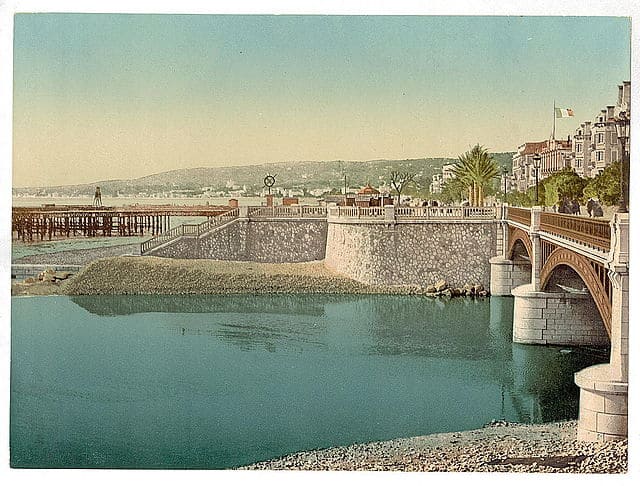 Despite being known for its beaches, yachts, and famous film festival, Nice is also a dream destination for foodies. While the salade Niçoise with egg, Dijon, anchovies, and tomato is Nice’s most well-known dish, the jewel in the Côte d’Azur’s crown has an abundance of less famous local specialties just waiting to be discovered by hungry visitors.

Unfortunately, there is only a certain amount of food you can eat per day so food tours are a nice convenient way to sample a lot of different dishes at amazing locations. There are many good options too, from food walks in Vieux Nice to private food tours.

You’ll enjoy tasting the socca, a hot and crispy pancake with a soft filling. Or visit the meat market where you can also get a drink at the bar inside, and eat a homemade pissaladiere, which is a tart with onions.

Eating grilled peppers and stuffed farcis, tasting weird ice creams at the famous Fenocchio, enjoying goat cheese at the local market, there’s so much of culture to savor in Nice, and you can experience both local markets and the best of Old Nice with a food tour.

5. You will love the nightlife at Nice as it is a party hotspot all year round 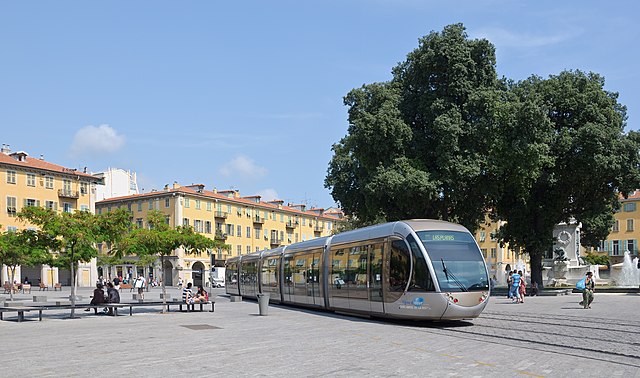 The Nice tramway on Place Garibaldi in Nice, on the French Riviera. The tramcar uses onboard nickel-metal hydride batteries to cross this historical square. Photo by Myrabella – Wikimedia Commons

Lazy beach days must be followed by vibrant party nights, and Nice is a party hotspot all year round. Trendy bars, jazzy cafes, and chic nightclubs see locals and visitors rocking the night away.

6. Discover the crypt of Nice which is more of a large area that’s home to ancient fortifications 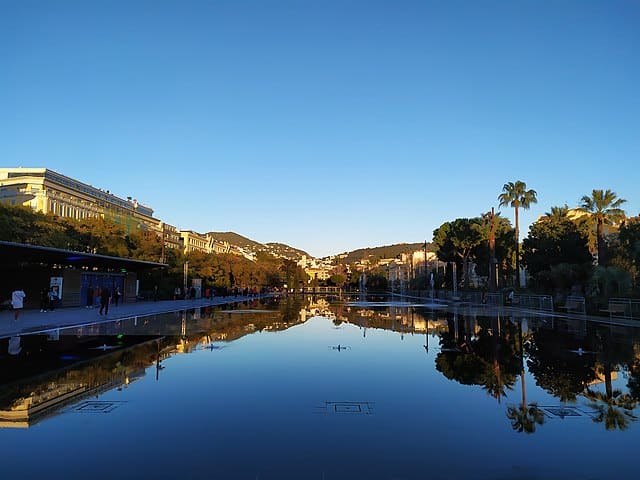 The Miroir d’eau (Water Mirror) in Nice is one of the world’s largest reflecting pool, covering 3,000 square metres (32291 sq ft). Located on a greenway eastward of the Place Masséna, it is a two-minute walk from the Promenade des Anglais, old town, town centre, and Albert I Garden. It was unveiled in 2013. Photo by Anthony Baratier – Wikimedia Commons

Found during the construction of a tramline in 2004, La Crypte Archaeologique Nice is not really a crypt. It’s more of a large area that’s home to ancient fortifications dating back to 1380.

The ruins are part of the Nice Chateau or Castle Hill that was destroyed in 1706 and are located underneath the Place Garibaldi in an area covering 2000 sq km.

Take the tour and you’ll see moats, turrets, walls, outbuildings, and even a drawbridge. Because it has only one entrance, only 15 visitors are allowed at a time.

7. Visit the Museum of Modern and Contemporary Art showcases avant-garde art from well-known to lesser-known artists 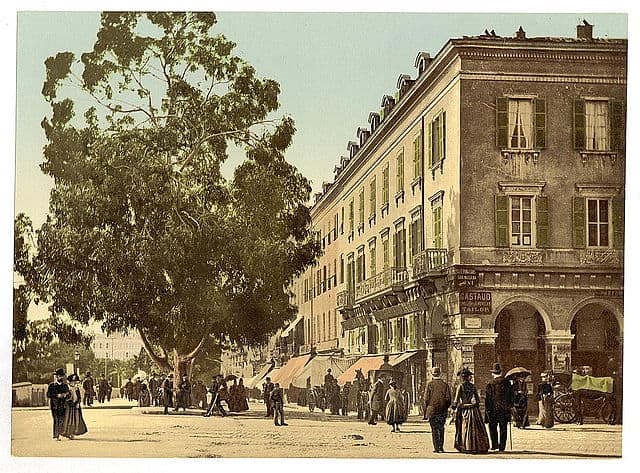 Yves Klein, Francois Dufrene, Andy Warhol, Claude Pages, and Niki de Saint Phalle are just some of the artists whose creations you’ll see here. You can visit Le MAMAC on your own or club it with other attractions on a full-day tour of Nice.

8. See the Russian Orthodox Church that had truly Russian design and embellishments 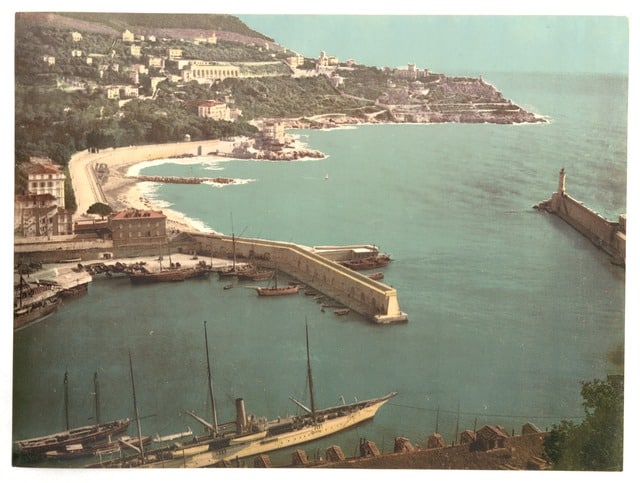 Tsar Nicholas II of Russia realized his mother Maria Feodorovna’s dream of building a Russian Orthodox church in France that had truly Russian design and embellishments. From 1903 to 1912, the exuberant Russian Cathedral was built, with beautiful domes, spires, and bells all funded by Tsar Nicholas II.

With a detailed iconostasis around the choir area, wooden carvings and murals, ornate frescoes and an interior that’s shaped like a Greek cross, this church situated on Avenue Nicolas II is a must-visit.
Still in use today, it’s considered one of the important Russian Orthodox buildings outside of Russia.

9. Find the Mini Replica of the Statue of Liberty as you tour Nice 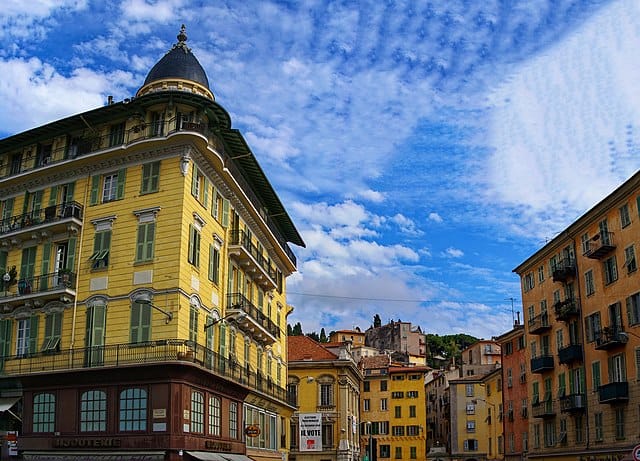 There are many replicas of the infamous Statue of Liberty all over the world. And while the original statue built by French sculptor Frédéric Auguste Bartholdi in 1886 stands 154 feet tall, its replicas vary in size.

10. Take a Day Trip to neighboring towns such as Eze, Villefranche, Monaco, or Cannes

A stay in the South of France isn’t complete without visiting at least a few of the charming towns and villages nearby. It’s easy to incorporate all these South of France towns in your itinerary by basing yourself in Nice and taking day trips to towns such as Eze, Villefranche, Monaco, or Cannes.

Home to the International Film Festival, Cannes is a town associated with media, creativity, and luxury. It’s also home to beautiful beaches, grand hotels and villas, and the Fort of St Marguerite where the Man in the Iron Mask was held. Visit Cannes to rub shoulders with the who’s who and the rich and famous.

Monaco is a small principality to the East of France that captured hearts when Grace Kelly married Prince Rainier. Home to panoramic landscapes, beautiful palaces, rich harbors, and extravagant casinos, it’s one place that must be added to the bucket list.