Understand The Love Story Between The Olympics and France 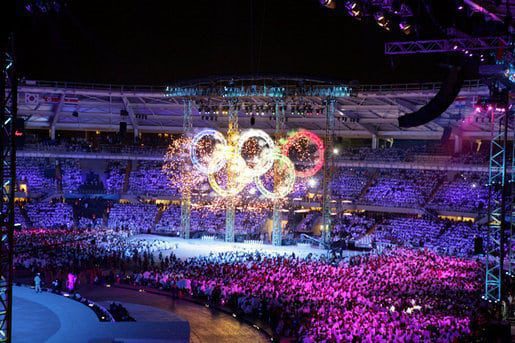 P021006SC-0886 Fireworks in the design of the Olympic rings is a highlight moment during the 2006 Winter Olympics opening ceremony in Turin, Italy, Friday, Feb. 10, 2006. White House photo by Shealah Craighead

Understand The Love Story Between The Olympics and France

The Olympic Games (OG) have become the largest sporting events of our time. They indeed include the biggest number of sports and athletes on the program. It is the sporting event that brings together the most individuals from different nations.

Athletes from all over the world participate. Their exploits are followed, directly or indirectly, by hundreds of millions of spectators. The five rings represented on the Olympic flag symbolize this international meeting.

At the last edition of the Olympic Games, in Rio in 2016, 206 nations were represented among the athletes. France is of course one of the participants.

In this article, I am going to talk to you about France in the Olympics.

Little history of the Olympic Games

But first, let me go back in time for a moment. You should know that the OG as we know them today have a long history dating back to antiquity in Greece.

At that time, the Greek world was fragmented into city-states that were constantly at war. In order to give unity on the territory and to honour the Gods, sports competitions are organized.

Like they took place in Olympia, they got referred to by the name of the site: the “Olympic Games”.

The Olympics Games were already a big event in the hellenic word. At the time of the competitions, athletes, spectators and merchants from everywhere flocked to the site. It is estimated that more than 40,000 people attend the OG.

Okay now, here we go for France history with the Olympics !

A French at the origin of the modern Olympic Games!

Millennia after the end of ancient Greece, the French Pierre de Coubertin decided to create the first Olympic Games of the modern era. In 1894, the International Olympic Committee (IOC) is founded in order to organise the event. 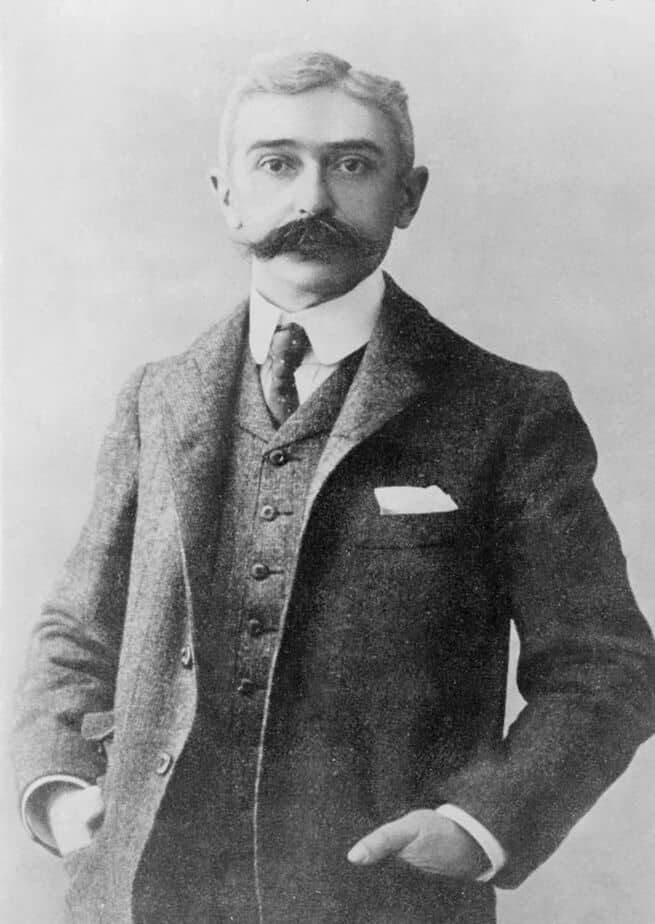 Year 1896 marks the beginning of an exceptional adventure that has now lasted for more than a century !

The modern Olympic Games are inspired by the past, but of course their organisation has also evolved !

The Summer Games consist of 28 sports that take place on the track, on the road, on grass, in the water, on the water, outdoors and in sports halls. The Winter Games are made up of about 10 sports on snow and ice.

Unlike the ancient Olympic Games, each edition of the modern Olympic Games is held in a different country and city. The modern Games are now open to all: man, woman, from any country.

France participated in a total of 27 summer and 23 winter Olympic Games. It won a total of 248 gold medals, 276 silver medals and 316 bronze medals. The country is ranked in the 5th position. 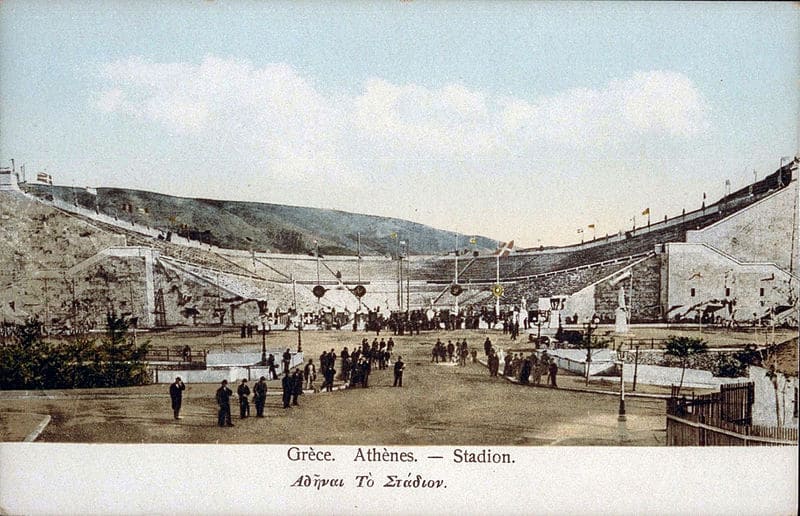 The choice of Athens, Greece, for the first modern Olympic Games makes sense.

The highlight of this first celebration was undoubtedly the marathon. The idea to create this event came from the French Francis Bréal, a friend of Pierre de Coubertin.

He wanted to commemorate the feat achieved by a soldier who hastily covered the forty kilometres separating the cities of Marathon and Athens. His mission was to announce to the Athenian people the victory of the Hellenic armies against the Persians. He achieved this at the cost of his life and became a legend. 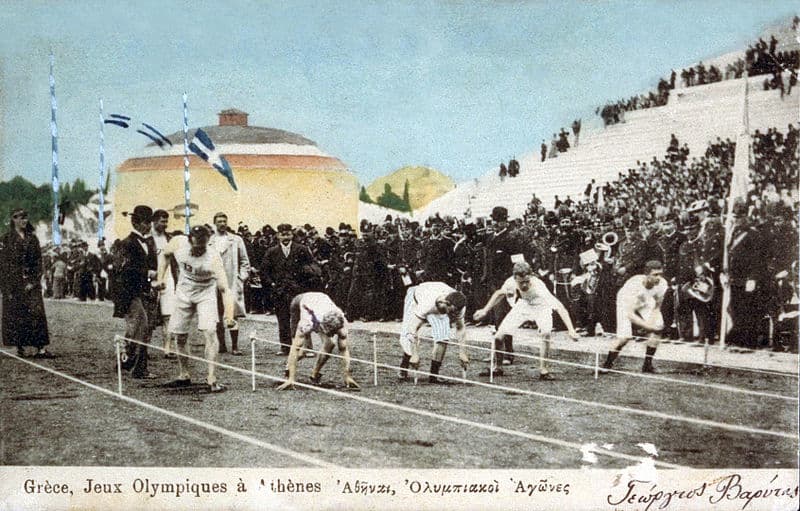 Race at the Athens first Olympic Games in 1896. Photo from Wikimédia Commons.

The first French Olympic title was awarded to Eugène-Henri Gravelotte, a 20-year-old medical student. He won by beating his compatriot Henri Callot in the foil final (fencing).

He is the first of a line of champions who will make fencing the first French Olympic sport.

Another French athlete distinguished himself this year, Leon Flameng, in the track cycling event. He won the gold medal in the 100 km with 14 laps of the track ahead of the second!

These were the first games to be held in France, in Paris.

The competition took place as part of the 1900 Paris Universal Exhibition. 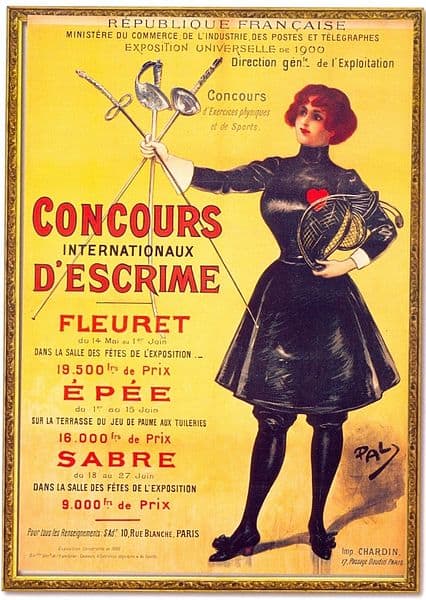 The official poster of the Olympic Games of 1900 in Paris during the Universal Exhibition. Photo from Wikimédia Commons.

It is a historic edition because of women’s Olympic debut. They then were allowed to compete in two sports: tennis and golf.

In this 1900 edition, France won the largest number of medals in its history with 101 medals, including 26 gold medals.

However, it remains exceptional because at that time the majority of the athletes competing were French. Several events were even contested only by Frenchmen !

1924: The Summer Olympics and the creation of Olympic Winter Games

In 1924, France hosted the the competition  for the second time. 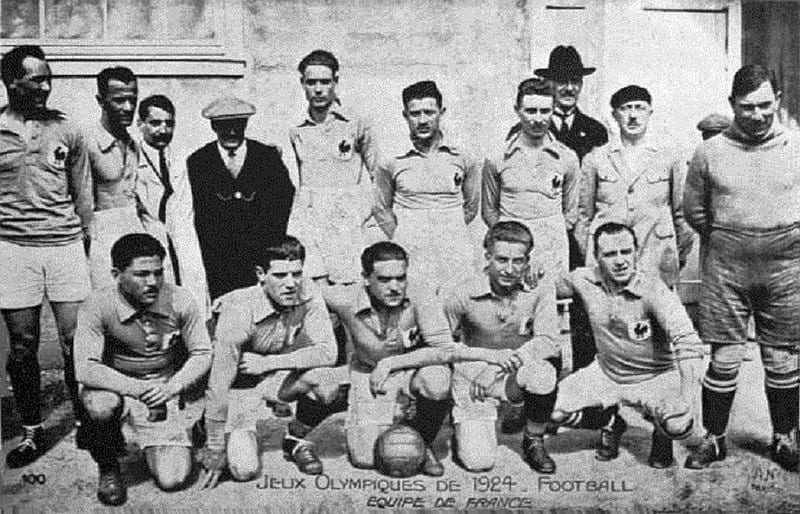 The 1924 France national football team that competed at the Summer Olympics held in Paris. Photo from Wikimédia Commons.

Year 1924 also marks the creation of the Olympic Winter Games in Chamonix (south east of France).

It was not the first time that France  hosted the event. But in 1900, the Games were incorporated into the World Exposition. According to Pierre de Coubertin they were not a success because they hadn’t been sufficiently highlighted.

His objective was to prove to the world that Paris and France were able to welcome athletes from all over the world. It was his last wish before his withdraw from the International Olympic Committee.

The International Olympic Committee was hostile to this project but after negotiations, Paris was finally designated as the host city of the 1924 Olympic Games.

Another important decision was taken this same year : the Committee decided to create a Winter Olympic Games starting in 1924. The city of Chamonix, south east of France, is designated to host them. 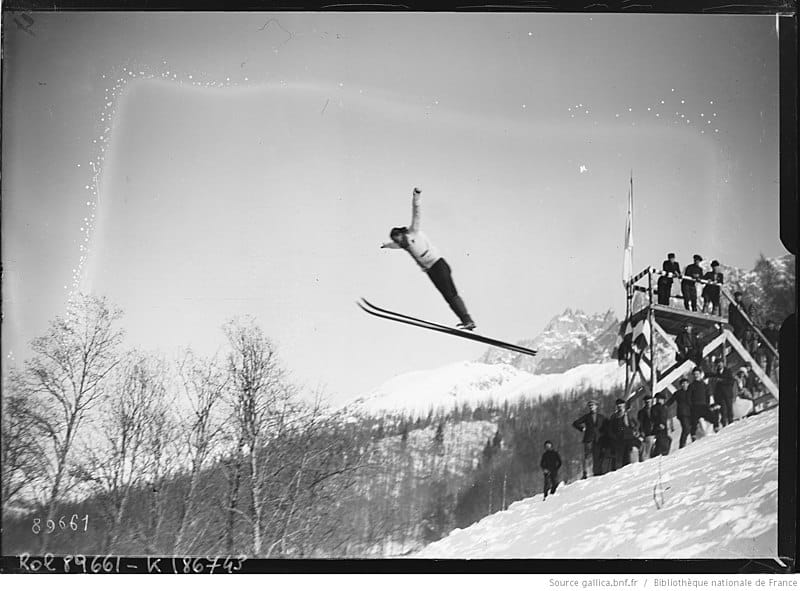 That year, France won 38 medals at the Summer Games and ranked third among nations, while it won only three (bronze) medals at the first Winter Games.

Throughout its history, the OG have been the subject of many scandals and controversies.
As they are at the forefront of the international scene, they can become an instrument of propaganda and serve political interests.

In 1936, in Berlin (Germany), the Nazi regime took over the Olympic Games. Some athletes refuse to participate for this reason.

In 1980 the Olympic Games were held in Moscow (Soviet Union). The United States called for a general boycott following the invasion of Afghanistan by Soviet troops. American athletes are not allowed to participate in the Games or risk losing their passports. Like the United States, other countries did not  attend the Games.

In 1968, in Mexico City,  two runners of the American team, Tommie Smith and John Carlos,  demonstrated against racism in their country.

On the podium at the 200m medal ceremony, they raised their fists gloved in black and lower their heads when the American flag got raised. Their gesture expressed their sympathy for the “Black Power” movement, which fought against discrimination in the United States against people of colour. Their act got them sent home! 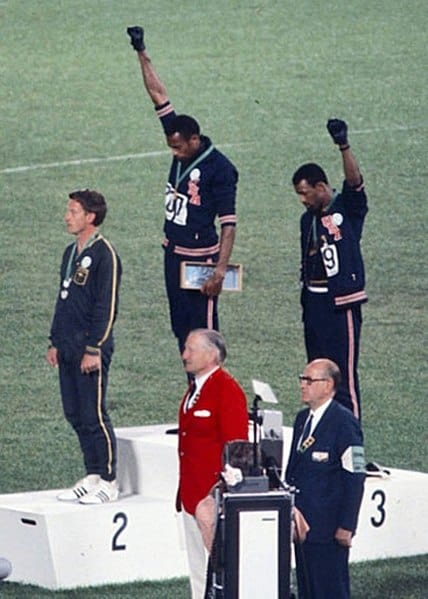 Something surprising also happened at the 1936 Olympic Games opening ceremony in Berlin. French athletes seemed to make the Nazi salute !

The Olympic salvation was very similar to the fascist salvation. The delegations of France and Canada made it in front of Adolf Hitler’s official gallery.

Immediately, the Nazis believed in the delegations’ adherence to their ideology, which triggered applause and fascist greetings in the stands.

However, the other nations (the majority) chose to uncover their heads, salute militarily or not salute.
The Olympic salute was changed a few years later.

Man has always sought to increase his physical capacities through the absorption of various substances. This is mainly the case during sports competitions.

Thomas Hicks, the winner of the 1904 Saint Louis marathon, was only able to reach the finish line thanks to his trainer who gave him two injections of strychnine sulfate and a good glass of French cognac!

But at that time, there was no mention of doping and Hicks was congratulated on his victory. Doping began to be discussed in 1928 when the International Athletics Federation banned the use of stimulants. But this ban remained symbolic and there was no real control.

The International Olympic Committee (IOC) decided in 1967 to ban and strictly control the use of performance-enhancing drugs in Olympic competition.  From then, anti-doping tests are carried out on all athletes and women must even submit to a femininity test. 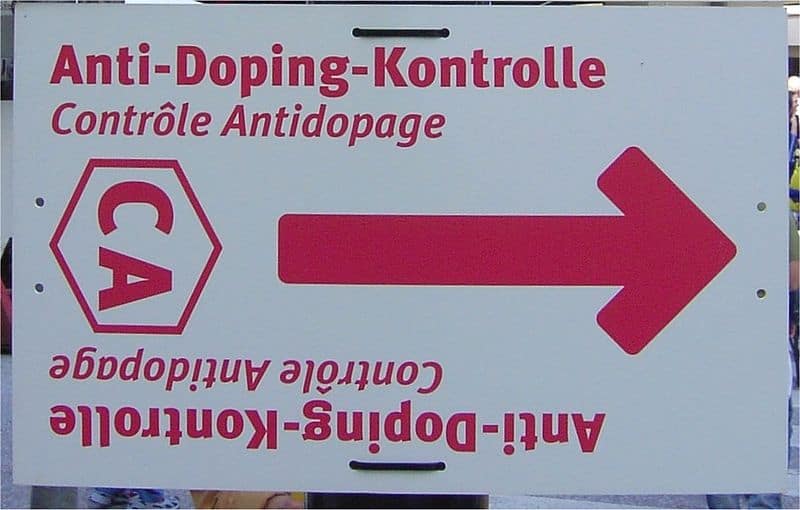 The biggest doping scandal dates back to 2014 and concerns Russia. The Moscow government got accused of “safe state doping” of its athletes by the World Anti-Doping Agency. During the Winter Olympics in Sochi in 2014, the Russian Ministry of Sports and the Russian secret services reportedly exchanged positive urine test samples…

France and the next Olympics Games 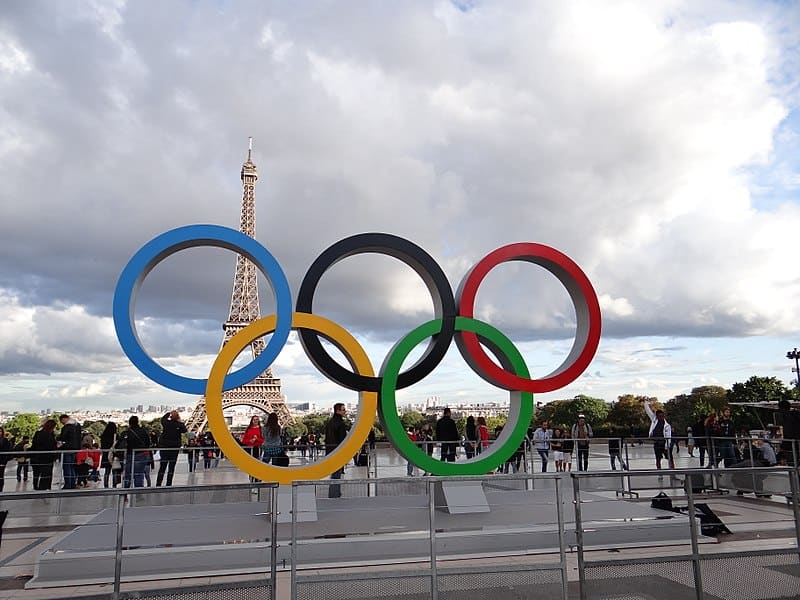 Olympic rings in the Place du Trocadéro in Paris. Photo from Wikimédia Commons.

As each edition of the modern Olympic Games takes place in a different country and city, a vote is held to choose the future host. The candidate city and the country concerned prepare a campaign over several months to defend their project in front of the International Olympic Committee. After the presentation, the Committee deliberates.

What is very cool is that the Paris 2024 project is based on 95% of existing (or temporary) sites.

The quays of the Seine at the foot of the Eiffel Tower will host the whitewater swimming, the triathlon and the marathon. Fencing and taekwendo competitions will be held at the Grand Palais, and archery on the Esplanade des Invalides.

The horseback riding will take place in the idyllic setting of the Chateau de Versailles.

The aquatic centre, a covered arena for baseball and wrestling and the Olympic village are the infrastructures to be built. 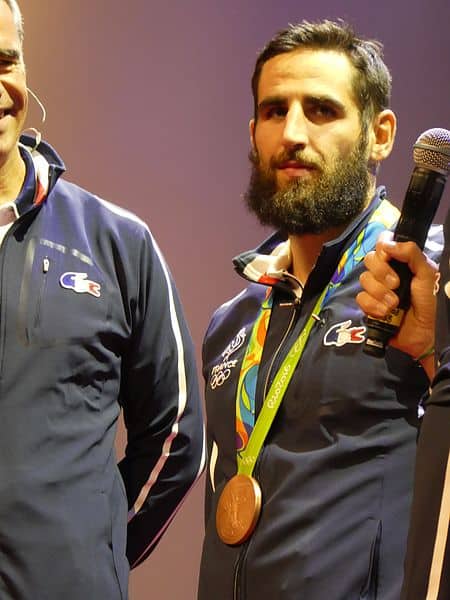 I hope you enjoyed reading this article. Let us know if you need any other information, it will be a pleasure to help you !