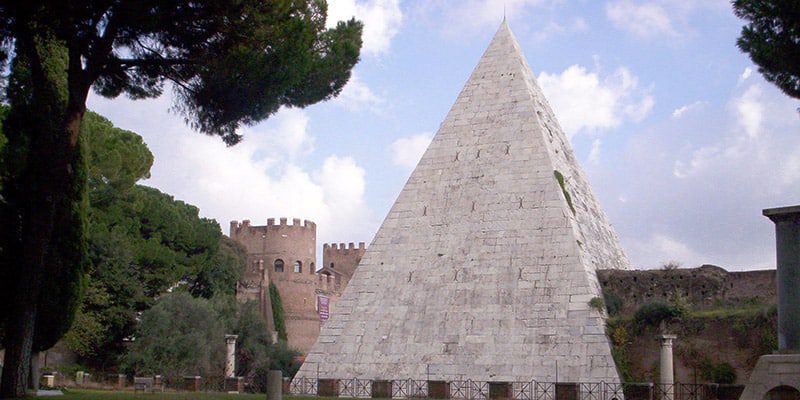 The Pyramid as seen from the Non Catholic Cemetery, image by Jimmy P. Renzi sourced from Wikimedia Commons

When you think of Rome, you probably have images flashing before your eyes of Saint Peter’s Basilica, the Colosseum or Trevi Fountain… and the crowds queuing to see them (think I’m exaggerating? Just a couple of days ago the local police limited accesses to the latter because of the sheer amount of people). 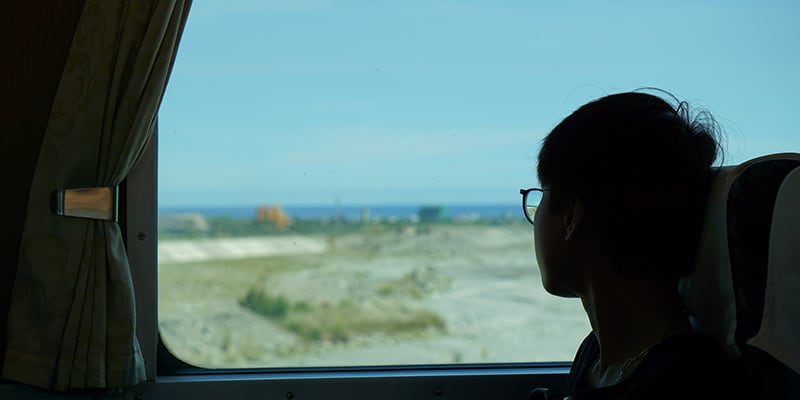 Image by Oyehaha, sourced from Unsplash

It doesn’t have to be that way, though. If your stay in the Eternal City allows it, you can absolutely flee the crowds and explore some majestic landmarks without being elbowed and squeezed at every turn. Not only will you enjoy more the sights themselves: finding some less traveled attractions will give you a different appreciation of Rome – the heat, the street sellers, the fatigue will be instantly forgotten!

So without further ado, here are some off the beaten path ideas for your Roman stay, from entire districts to cozy museums! 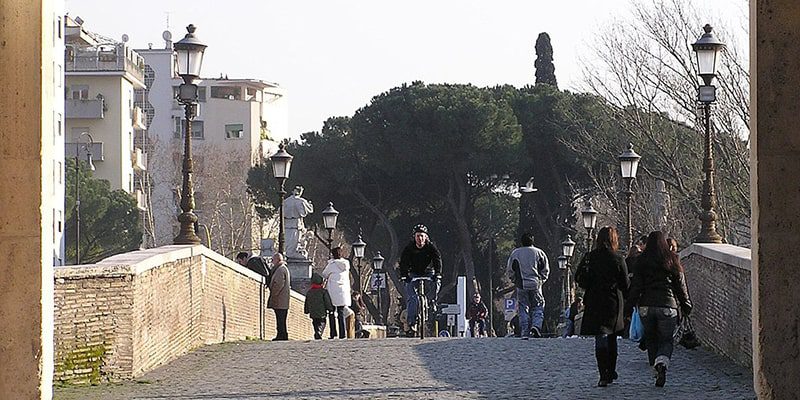 Imagine Trastevere… without the hordes of daytrippers.

This quainter borough in the northern suburbs and by the Olympic Stadium has a few things in common with its better known “cousin” – authentic mom-and-pop restaurants and cafes, a view on the river, a bridge that is a top spot for couples wanting to share sweet moments (by the way this is where the love padlocks tradition originated a few years back: just don’t try to do that now, as it just became illegal!)

Way less traveled than areas known for their nightlife such as Testaccio or Pietralata, Ponte Milvio has something for everyone: cuisine from the refined to the casual, bars and flea markets, clubs and aperitivo places.

Ponte Milvio can be reached by tram line no. 2, by bus or car. Closest subway stop is Flaminio. 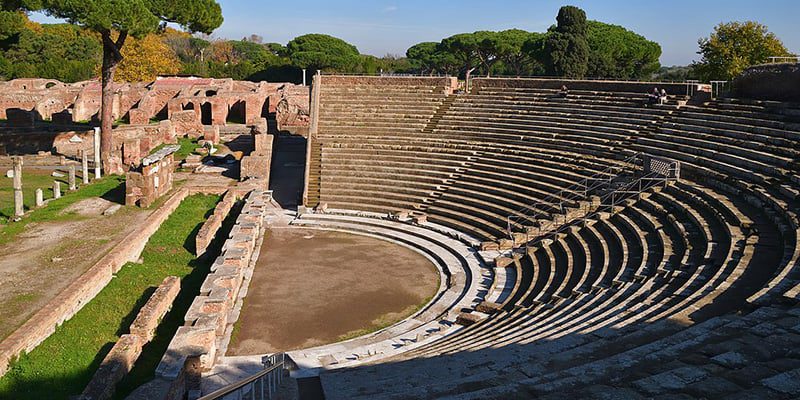 The Roman amphitheater at Ostia. image by Rabax63 sourced from Wikimedia Commons

Oversimplifying for the sake of brevity, Ostia Antica, a 30 minutes subway ride south of the center of the city, is Rome’s Pompeii, in that it is a whole city you can walk into and explore at will. Excavations, as with the world-famous site near Naples, are also ongoing. The similarities end there: there will never be crowds of 18,000 people at once visiting these ruins!

What is also different about Ostia is that it was never destroyed by a natural event (if you exclude the silt from nearby river Tiber, which incidentally protected the site from robberies and decay).

That way, tourists can enjoy a visit to what was once the harbour of the city without the sense of tragedy that is usually associated with other Roman localities. Plus, part of the remains at Ostia are used to this day. Case in point: the beautiful amphitheater, which is the setting to a number of music, ballet and theatre events each summer – talk about a magical backdrop! 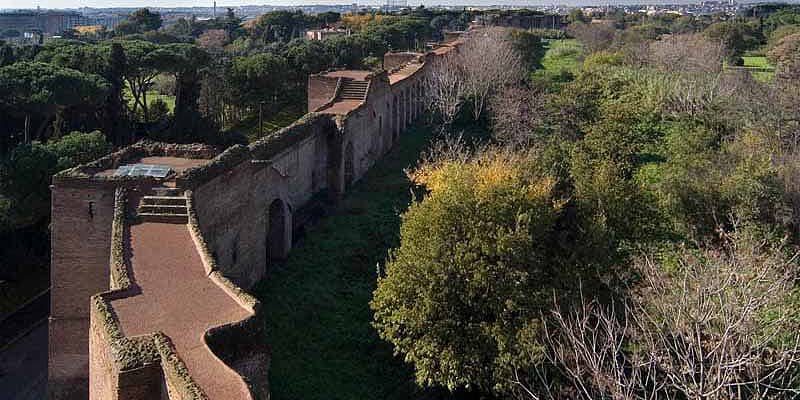 The view from the top of the Museo delle Mura, image sourced from museodellemuraroma.it

While a tour for the different sets of Roman walls (like the Servian walls) that are still standing doesn’t exist yet (part of the route has either become private property or belongs to government offices, foreign embassies or schools!), this small museum where the Appian Way begins is great to have an understanding of how this line of defense wasn’t just a few rows of bricks haphazardly put together.

What’s great is that more often than not there are going to be no crowds at all at this hardly known landmark!

At Museo delle Mura you will be able to climb to the top of Porta San Sebastiano (“San Sebastian’s Gate”) and take a look of just how much of the city it was possible to survey at once. Note that in the early 1930s, when protecting Rome’s cultural heritage wasn’t a priority as it is now, this became a luxury apartment for one of Mussolini’s main collaborators. Imagining how living here would have felt is also part of the experience.

Open to Tuesdays to Sundays from 9AM to 2PM. Free of charge.

The Pyramid as seen from the Non Catholic Cemetery, image by Jimmy P. Renzi sourced from Wikimedia Commons

It’s one of those notions generally ignored by history books that ancient Rome at some point went crazy for all things Egypt, not just Cleopatra, to the point where there were several pyramids in the city (a bit of trivia: one was where St. Peter’s Basilica was later erected).

The only one currently standing is on the border of the hip Testaccio and Ostiense districts, and it’s only open to visitors for two weekends each month. Over time, one side of it was incorporated in the beautiful, peaceful Non-Catholic Cemetery, also known as the Protestant Cemetery in Rome, where such poets as Shelly and Keats are buried – also a recommended visit and one of those places in Rome that is hardly ever mobbed by huge crowds.

Interestingly enough, the person who commissioned this posh tomb for himself and his family – a Caius Cestius – never actually set foot in it, as legend has it that he failed to pay the labourers working on the building site… So the angered contractors threw him into the river. Whether true or not, now you can enter the pyramid yourself!

Guided tours only, with MANDATORY BOOKING. Open on the third and fourth weekend of each month (not in August). 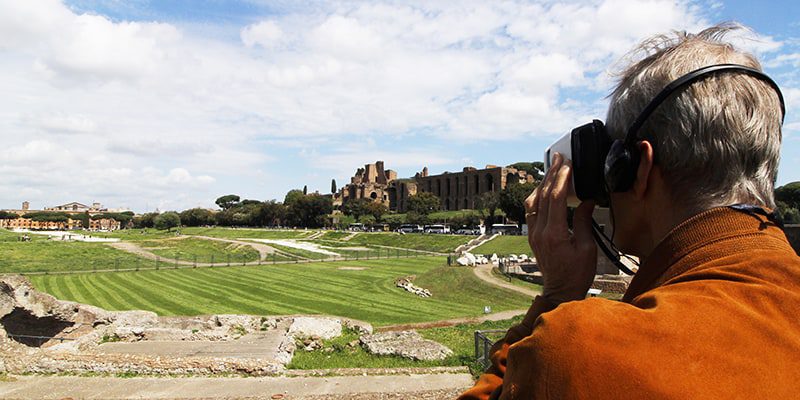 A tourist using a VR headset to see the original appearance of the Circus Maximus, image sourced from Zetema

As plans exist to excavate the whole area (an archaeologist working on site said to me that there are roughly 13 meters of debris – some 42 feet – between the current street level and the original floor of the circus), just the southern tip of the stadium is currently open to the public.

In spite of being so close to the Palatine Hill or the Colosseum, though, there is just a handful of visitors here every day. Most people don’t know what they’re missing – a carefully curated section of the monument shows exactly what happened here during the triumphal marches or races that were held here.

Upon request, you can pay an extra for a VR headset which will allow you to see the shops opened under the bleachers or experience a chariot race. Not only that – you will be able to see how the Circus Maximus transformed during the various millennia.