Discovering the Great Mosque of Paris 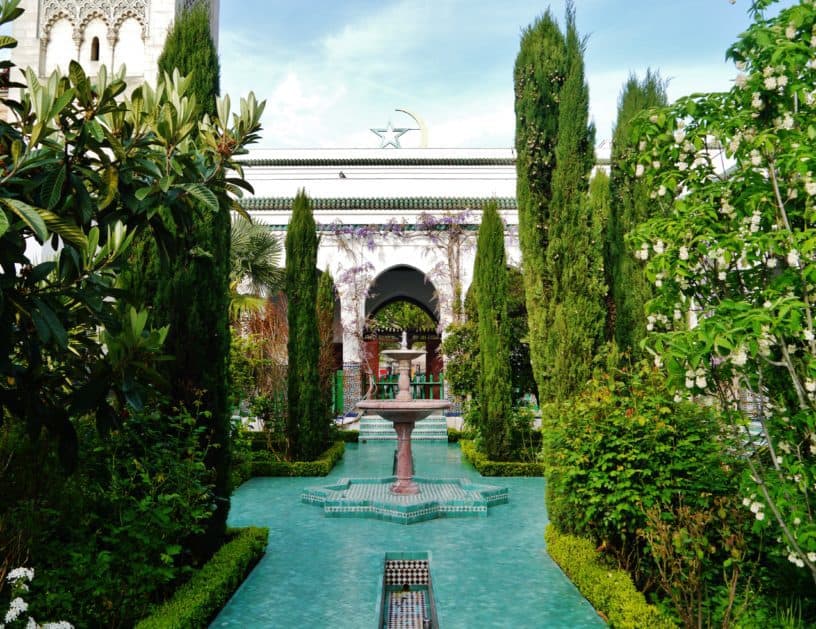 Discovering the Great Mosque of Paris

The great Mosque of Paris is one of my favourite places in the 5ème.
Visiting this monument you will feel transported out of modern day Paris and plunged into oriental culture.

This is unique in a city and neighbourhood surrounded by Parisian buildings and haussmannian architecture. 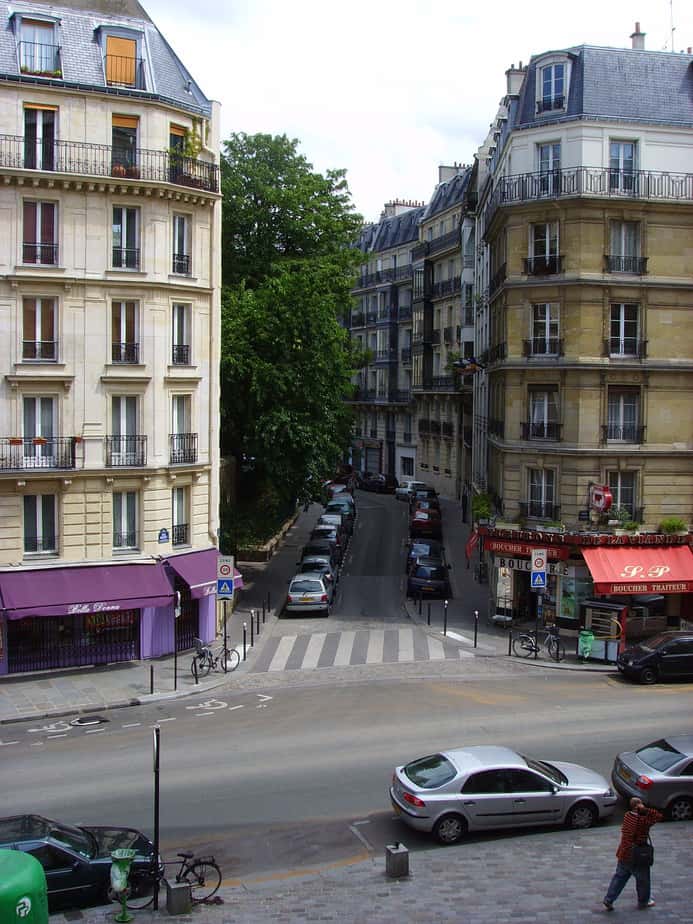 It is also the remark that local residents make most frequently when they visit the great Mosque. They are shocked to find such a sense of exoticism and otherness in the heart of Paris’ Rive Gauche and Latin Quarter.

Getting to the Mosque

If you’re planning on coming by metro, the best would probably be to arrive from either Censier-Daubenton or Place Monge (both to be found on the line 7). 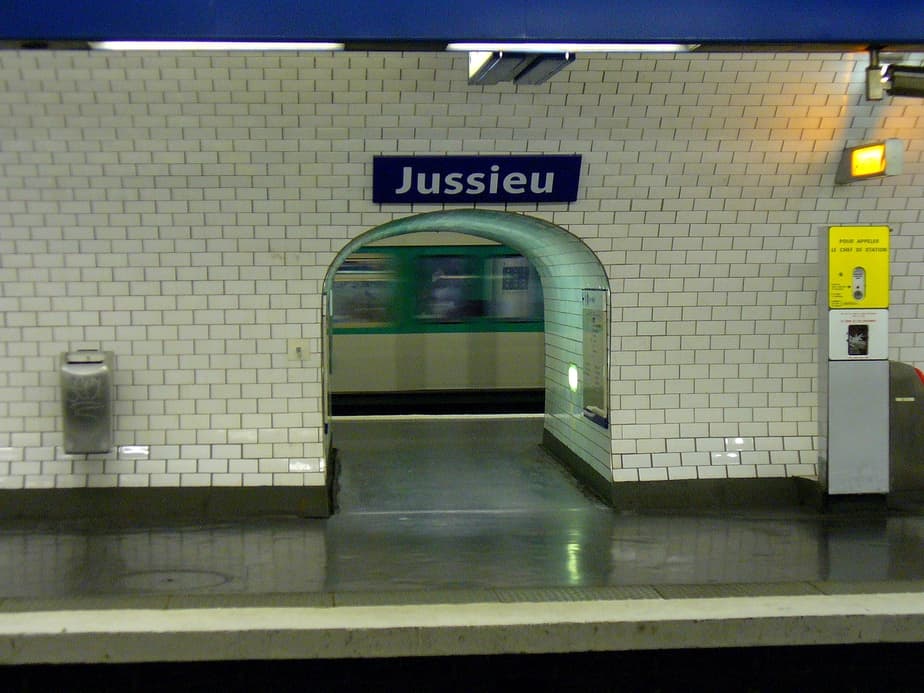 If the line 10 is more convenient from your hotel, it’s an equivalent distance walking straight down from Jussieu.

Once you arrive there are entrances on different roads. You can always enter by the main door, 2bis Place du Puits de l’Ermite. 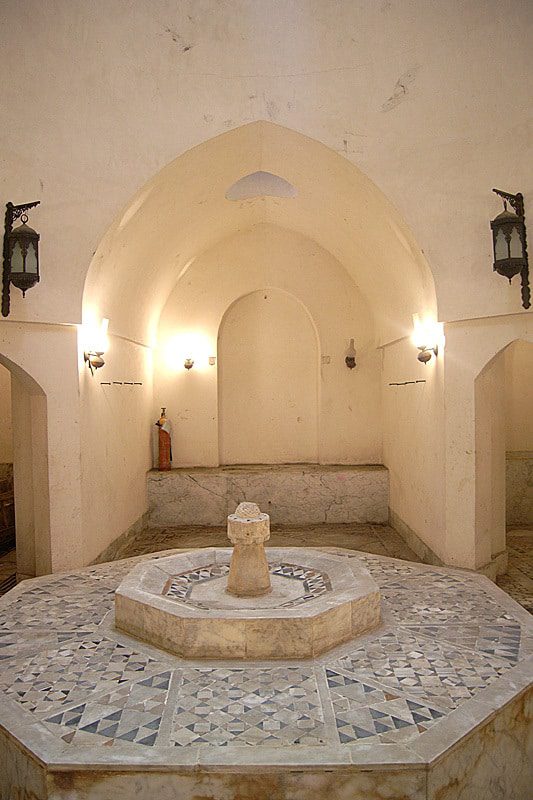 For the hammam and restaurant it’s 39 Rue Geoffroy-Saint-Hilaire.

Cultural Significance of the Mosque

The Mosque serves as an important symbol and reminder, promoting the visibility of muslims in France. As well as being a popular tourist destination and impressive display of exotic grandeur, the Mosque also houses an Islamic library, a prayer room, a conference room and 3,500 metres squared of oriental garden.

A Unique History of the Mosque

La grande mosquée de Paris, is the oldest mosque in mainland France. The Mosque was inaugurated in the interwar years in the 1920’s. Founded by Si Kaddour Benghabrit, an impressive figure, who served as a state worker or fonctionnaire at the Quai d’Orsay. 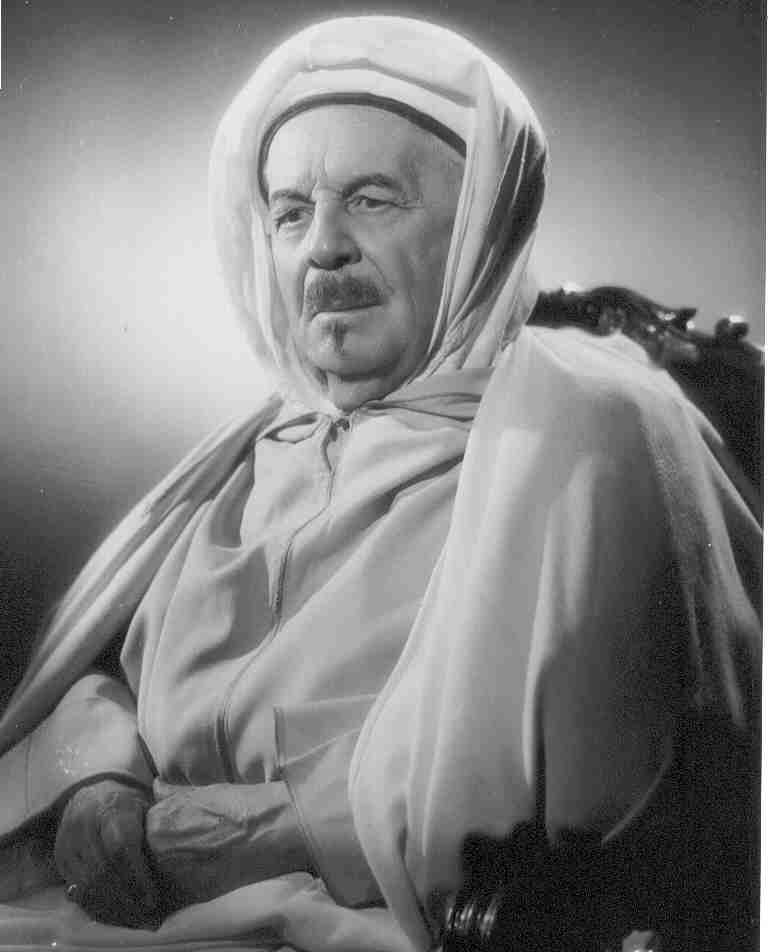 Hailing from Algeria, Benghabrit started a judiciary career in Algeria before working in French foreign affairs. A devout Muslim, his vocation to construct a Mosque on French soil was in part to symoblise an eternal friendship between France and Islam, whilst also paying homage to the thousands of Muslim soldiers who died fighting for France in the first world war.

Perhaps one of the most moving and little known stories from his background is how he saved many European and Algerian Jews living in Paris during the Second World War. Due to the Nazi occupation of France they were in grave danger of deportation. Thanks to the administrative position of the Mosquée de Paris, he was able to grant them Muslim certificates of identity, which helped certain amongst them escape deportation. 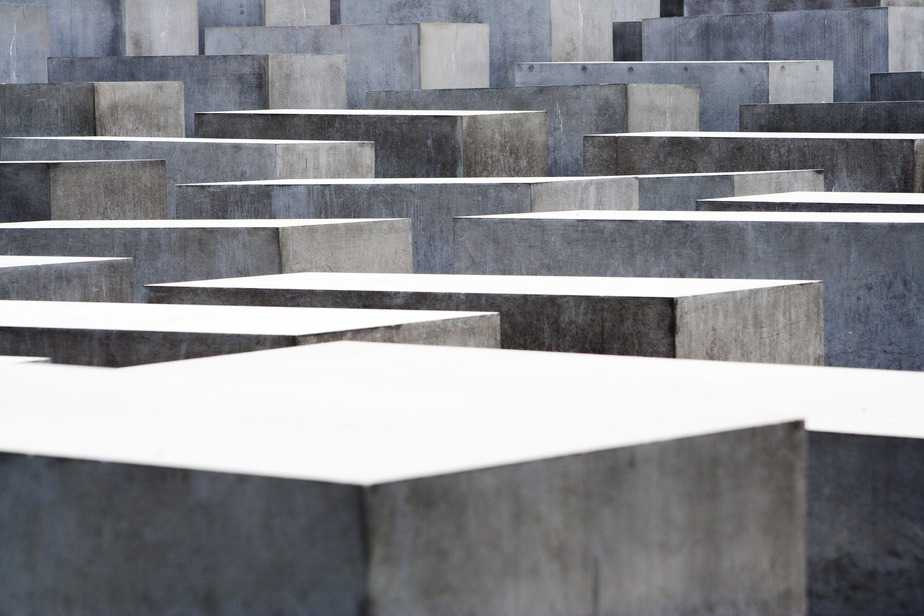 This incredible story has been explored in the documentary: ‘La mosqée de Paris une résistance oubliée’ directed by Derri Berkani, produced in 1991 for Racines France 3. Similarly, but revisited in a semi-fictional way the plot of Ismael Ferroukhi’s 2010 film ‘Les homes libres’ also covers this fascinating story.

The Great Mosque of Paris welcomes visitors to discover its treasures and history daily at 9am, noon, 2pm and 6pm (excluding Fridays and on sacred religious days). Making a point of welcoming guests with particular attention, respect and courtesy, entry will cost you just €3, (2€ for children students and groups of ten people or more).

The majority of visits take place without a guide, but Francophone guides are available on request.

The Gardens of the Mosque

Here are some pictures of the gardens on a summer’s day. Parisians and tourists alike are amazed at how completely “dépaysant” the unfamiliar and exotic experience is. And to think you arrived by métro and not a taxi from Marrakesh airport! 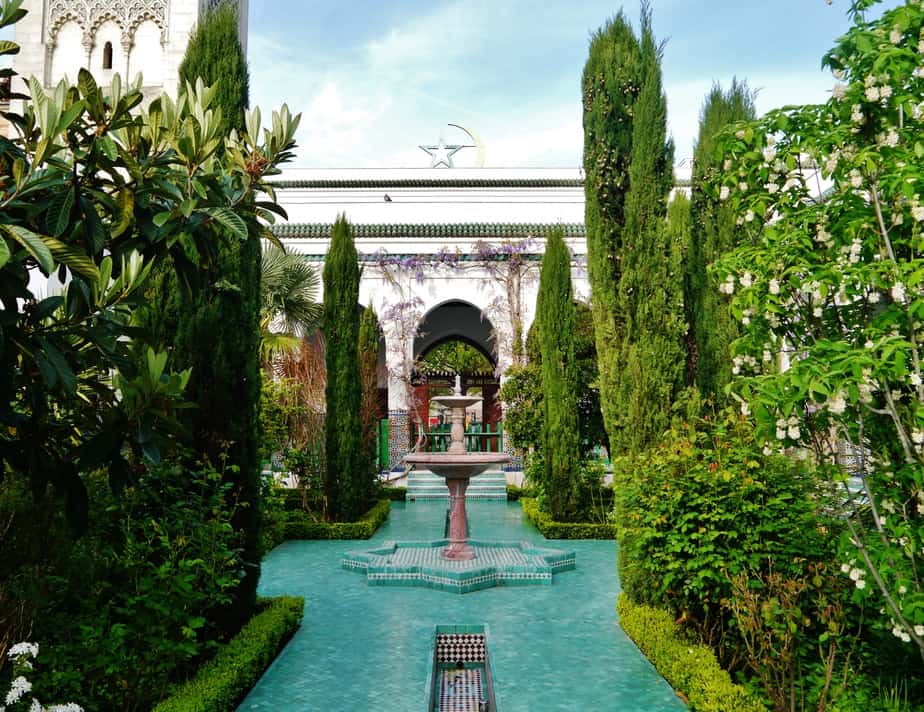 Go when the sun’s out, it will complete the illusion of being on holiday outside Paris. Take your time to enjoy the sumptuous gardens, bring your sunglasses a book and maybe a camera.

The Great Mosque of Paris is inspired by Spanish-Moorish styles of architecture. It was actually modeled on an existing Mosque in Fez (the el-Qaraouiyyîn Mosque). Its architecture is unique in Paris. It also reminds me of the Alcazar in Seville, similarly grand with intricate paneling and mosaics.

For all intricate and decorative features, experienced and specialised artisans from North Africa were commissioned to work with traditional materials, to achieve the desired effect. 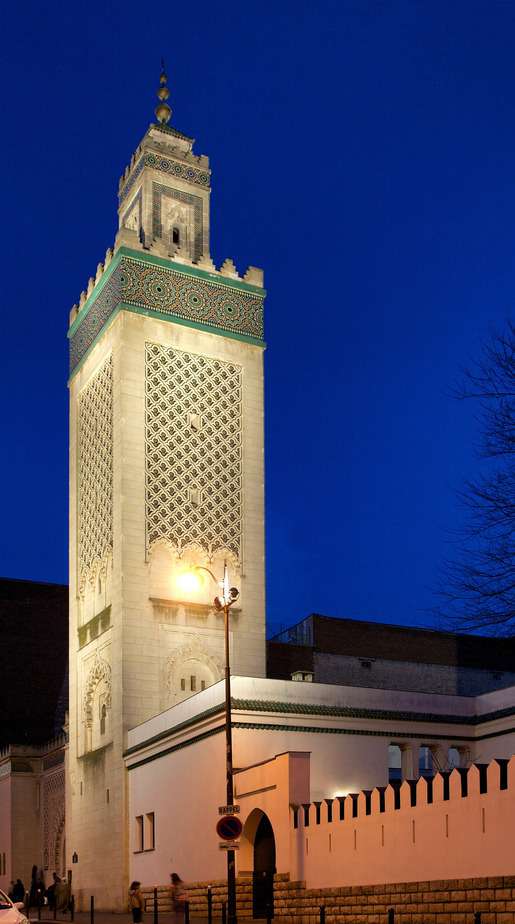 Mosque’s minaret measures 33 metres tall. It was inspired by the Zitouna Mosquein Tunisia. Marshall Lyautey inaugurated its construction in 1922, claiming that the minaret would soar into the sky of Île-de-France as one more prayer alongside all the other Catholic towers, such as Notre Dame, but they would feel no jealousy towards it. 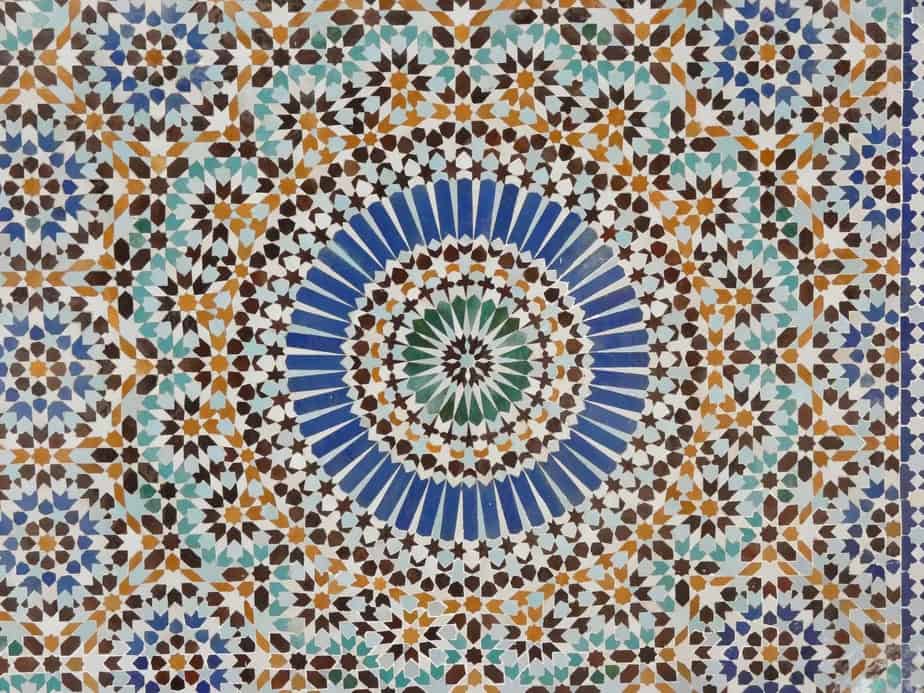 The tiles are incredibly aesthetically pleasing and seem to have made the leap from adorning la grande Mosquée to popping up in French interiors magazines.

The Café in the Mosque

The café is the ideal spot for quiet reflection. If the French flâneur, their oriental cousins from their former North African colonies share a talent for the slow life. The day is punctuated by the call to prayer (le muezzin) and moments of rest. This pleasant rhythm can be felt here.

Pretty much the only beverage ever ordered in le café de la Mosquée de Paris, is an incredibly sweet mint tea. If you have a sweet tooth you’ll love it, if not it’s still nice for the sake of tradition and to warm up your hands if you’re en terrasse enjoying some fresh air in the colder months. 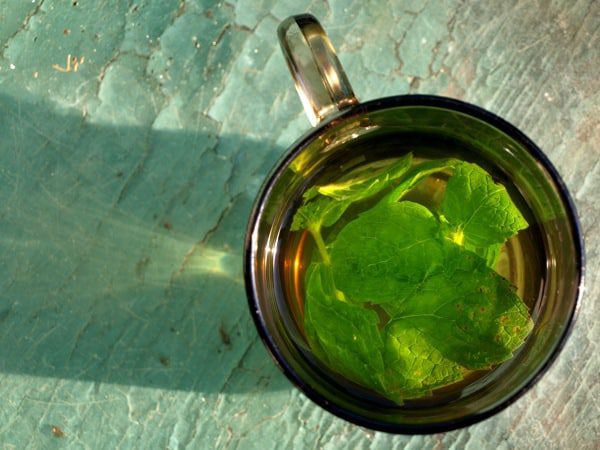 Since this is what pretty much everyone orders, there is a waiter who circuits round with a copper tray and a few crystal-style glasses of the piping hot infusion.

Setting it down on the mosaic circular tables you’ll want to be careful as the pretty trestle tables and paving aren’t 100% stable. On more than one occasion I have seen la casse, or breakage, when a serveur comes running with a dustpan and brush to sweep up shattered glass as children play oblivious to the scene at the foot of the beautiful olive tree that takes centre place in the café garden. 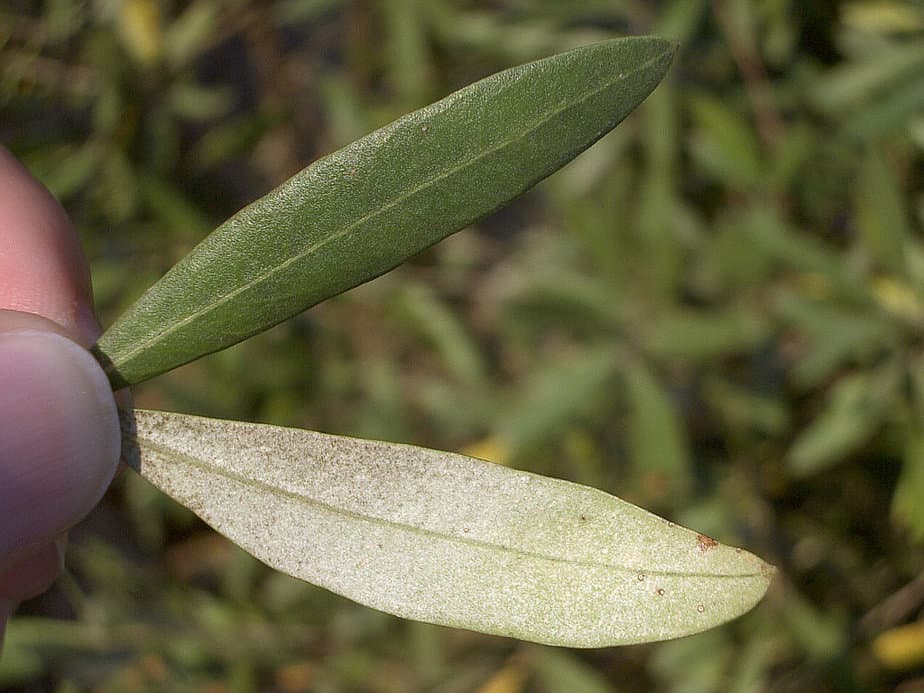 A selection of oriental pastries is also available, depending on what’s on offer during your stay: The pastries are especially elaborate during the holy month of Ramadan. My personal favourite are Makrouts, which are made with semolina, dates and orange blossom, giving them an original texture. 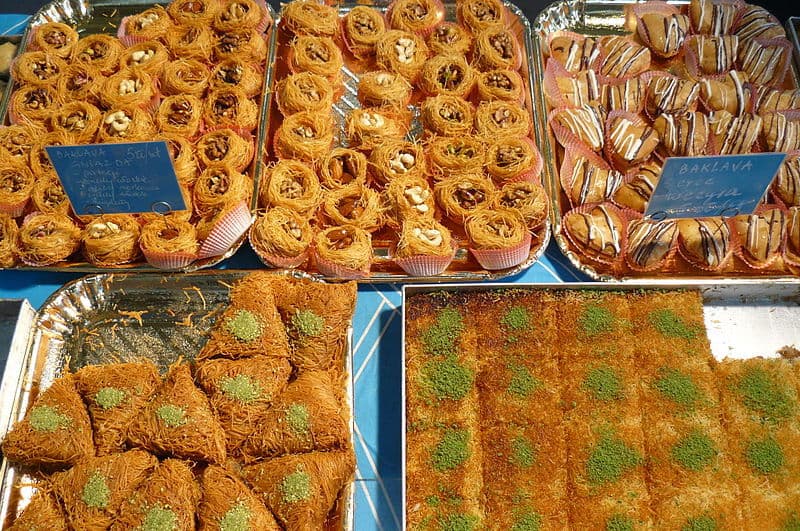 The Hammam in the Mosque

One of my most treasured discoveries at the great Mosque of Paris was undoubtedly its Hammam. Whilst hammams and spas of varying authenticity can be found all around Paris, this is the ultimate in terms of tradition and affordability. 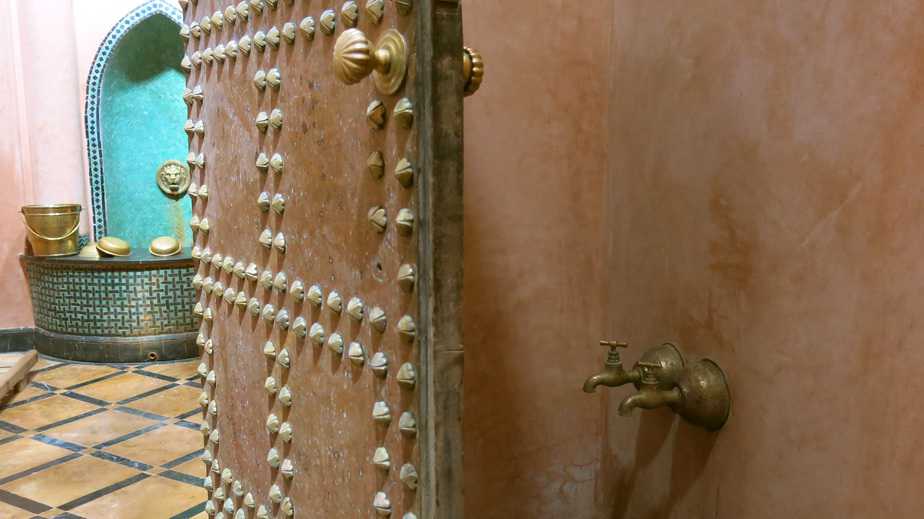 The Hammam is normally open from Wednesday through to Monday from 10am until 9pm. It is a single sex hammam and reserved for women from the age of 12 up. However, if you’re reading this hot off the press in December 2018, it is unfortunately currently closed for renovation and set to reopen in the new year.

If you’ll be in Paris a little later in Winter or early Spring 2019, read on.
The exoticism, similar to the Mosque’s luxurious gardens (at their best in the early summer), somehow fools you into thinking you’re somewhere in the Orient.

Tradition aside the biggest selling point has to be that entry to the hammam and its progressively hotter rooms is at just 18€. Considering the rare experience on offer, and the chic nature of the address, I think this is an incredibly generous and attractive price point. 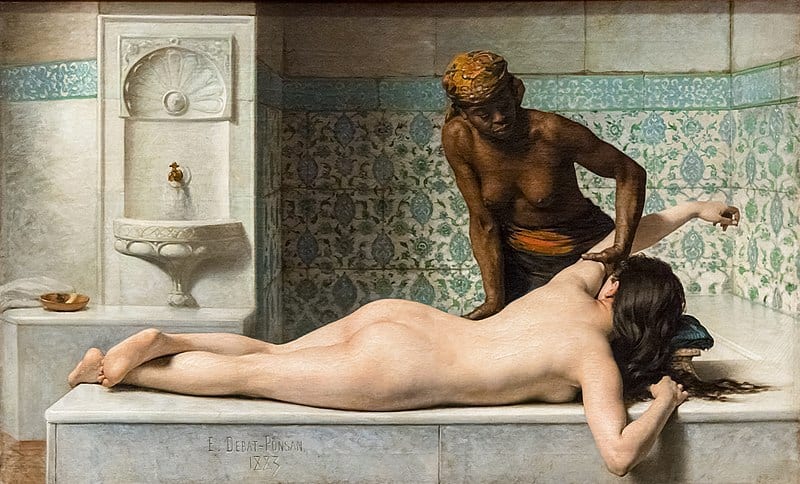 Ten minute massages performed by professionals are on offer at just 12€. They also propose a traditional exfoliation treatment, which works like a charm to slough off dead winter skin. Ask for “gommage au savon noir”, but be sure to mention if you happen to have especially sensitive skin, as the key words here are ‘invigorating’ and ‘thorough’!

Here is the website for la grande Mosquée de Paris.