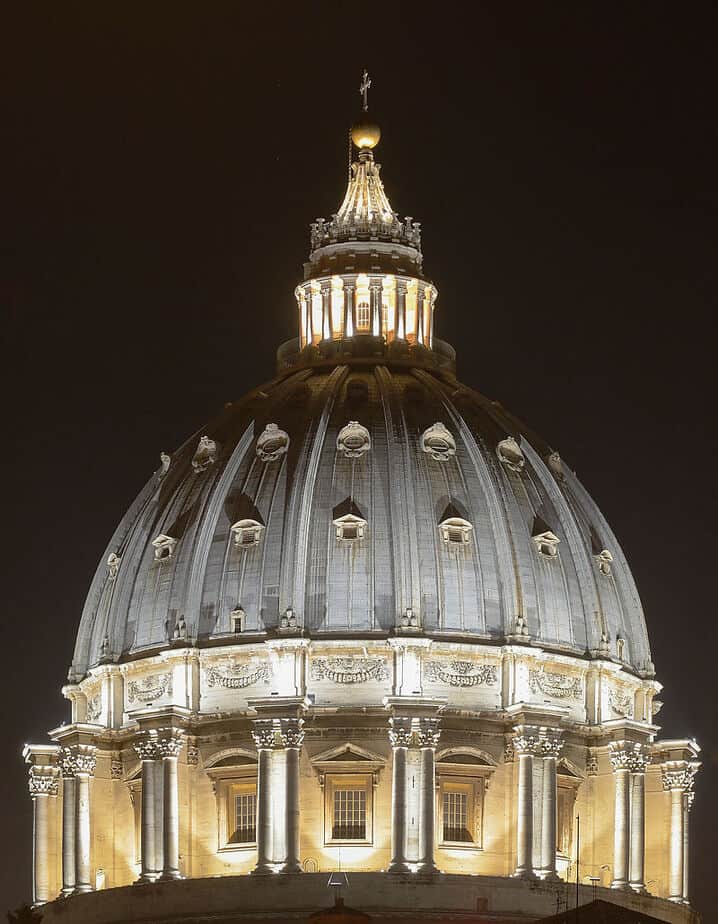 During the Renaissance period, Rome became the cradle of art.

The eternal city welcomed artists, sculptors and painters from all over the world, and it is for this reason that today we can admire so many works of art in Rome.

Today we’ll step inside the life of Michelangelo Buonarroti. You will take a peek through his life and works of art he created.

To begin, what was life like for this famous and well known artist? Let’s meet Michelangelo! 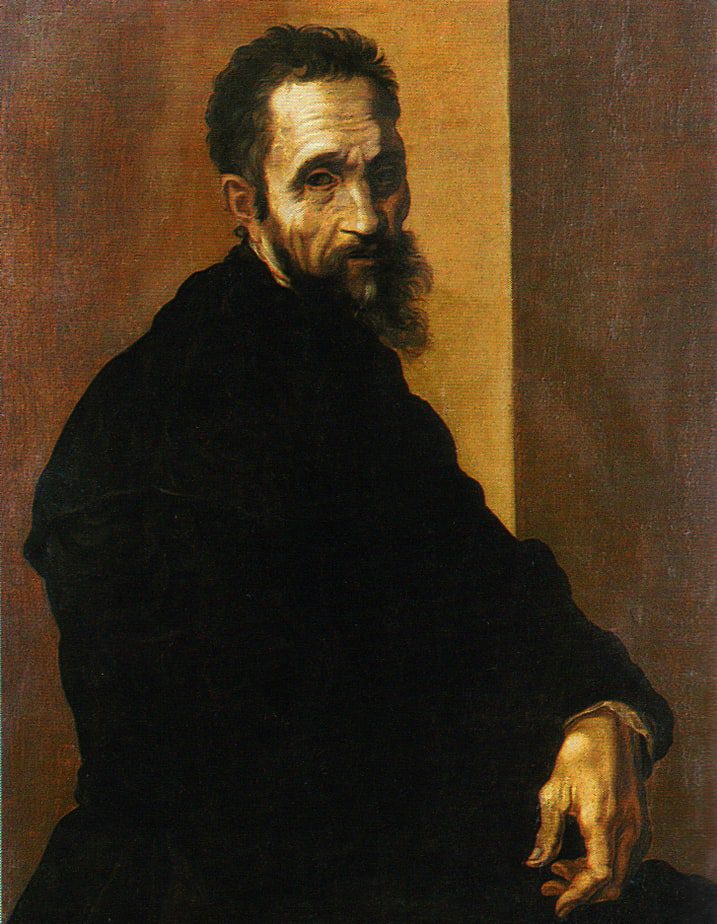 Michelangelo di Lodovico Buonarroti Simoni was a sculptor, painter, architect and a poet.

From a young age he became interested in art. He began his studies at the Ghirlandaio workshop in Florence and at the court of Lorenzo the Magnificent where he attended the art academy for about two years.

Michelangelo admired the works of Donatello so much that he decided to specialized in sculpture and in the relief technique.

During his lifetime he  became a famous artist, and  the Pope Julius II invited him to move to Rome to create important works for the Vatican.

In 1496, Michelangelo’s “Roman” period began, making him renowned throughout the world.

In 1564 after a life consecrated to art they buried him in the Holy Apostles Church of Rome, but his body was later returned to Florence with the help of his nephew.

The vault of the Sistine Chapel & the Last Judgment 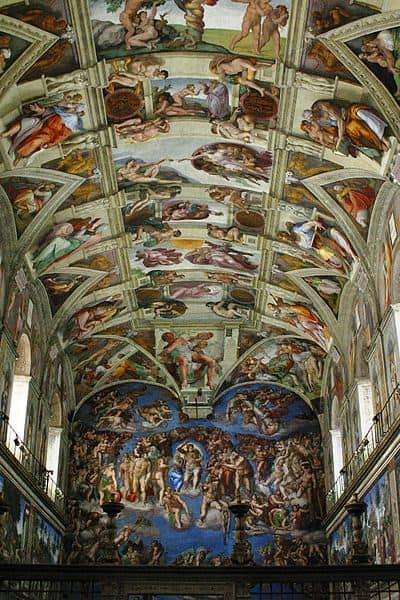 In 1508 Pope Julius II asked Michelangelo to build his impressive funeral monument. But in the end the Pope changed his mind, and asked him to fresco the walls of the Sistine Chapel.

Buonarroti accepted the work, and he offered to paint the entire vault of the church. The vault of the Sistine Chapel contains 343 figures, and impressively depicts the entire story told in the Old Testament.

You can admire the Creation, the Fall of the Man, and the arrival of the Apostles bearers of salvation. There are also beautiful renderings of the Sibyls, the stylized Prophet, and the figures of the Ignudi with the stories taken from the Bible. Also featured are the ancestors of Christ from Abraham to Joseph.

In 1535, twenty-five years after the vault was completed, Michelangelo returned to Rome. The Pope then called on Michelangelo to paint “the Last Judgment” on the altar of the Sistine Chapel.

Previously on the wall there were five frescoes belonging to Perugino and  Michelangelo, painted 20 years before. When the wall was ready he depicted the chosen ones, who ascended into heaven helped by angels; but also the  damned people thrown into hell.

If you want to understand more about it, book a seat at the Auditorium della Conciliazione.

Here you will admire the beautiful, completely immersive show  “The Last Judgment”. For 1 hour you will be immersed in projections, actors, perfumes and plenty of unexpected surprises. 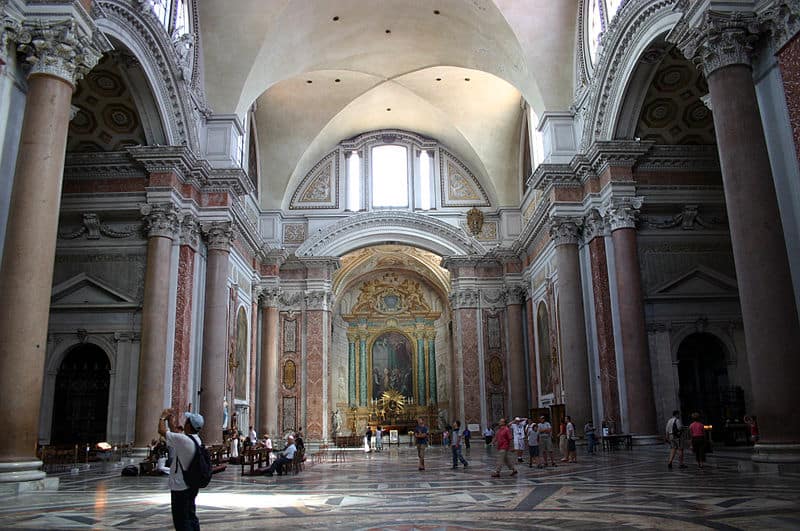 a view of the Church by Giovanni dell’Orto – Wikimedia Commons

Three years before his death he transformed the Baths of Diocletian as requested by Pope Pius IV. Michelangelo added two square side chapels, a vestibule and the choir, the cross vaulted transept, but the building was later frescoed by Vanvitelli. 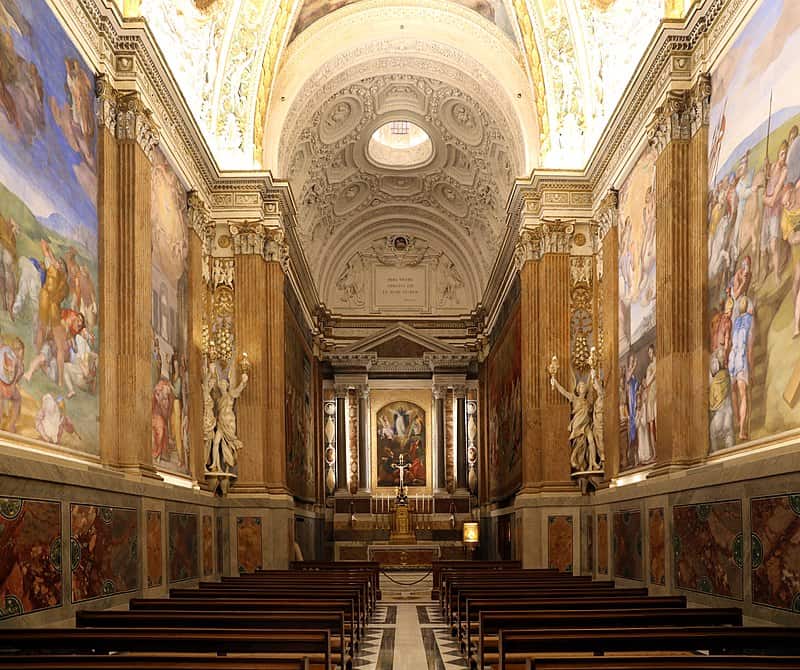 View of the Chapel – by Sailko – Wikimedia Commons

Here you can admire two of his works, so this site is a must-see!

The Conversion of Saul (or of St. Paul) fresco dating back to 1542 – 1545. Here you can admire Saul lying on the ground after falling off his horse on the road to Damascus. The Saint blinded by a beam of light from the sky.

You will also find the Crucifixion of St. Peter, the last fresco made by Michelangelo. This fresco shows the time before the martyrdom of St. Peter. The saint was crucified with the use of nails to the cross, upside down.

The Christ of the Minerva

The Cristo della Minerva is a marble statue located in the Basilica of Santa Maria Sopra Minerva. Christ is depicted resting on a symbolic cross.

The cross represents the one used during the martyrdom. He holds the sponge and the barrel used for the vinegar.

Although Michelangelo sculpted the body completely naked, the sculpture was later covered with a gilded bronze drapery. Us Italians were very modest!

The dome of San Pietro is one of the most famous symbols of the city of Rome, also known as “cuppolone”.

Michelangelo accepted the assignment in 1546. He tried to integrate the work of previous architects and engineers like Sangallo, Sanzio and Peruzzi, but Michelangelo never saw his work realized, as the construction of the dome stopped at his death in 1564.

The works resumed at the time of Sixtus V Peretti by Giacomo Della Porta and Domenico Fontana. 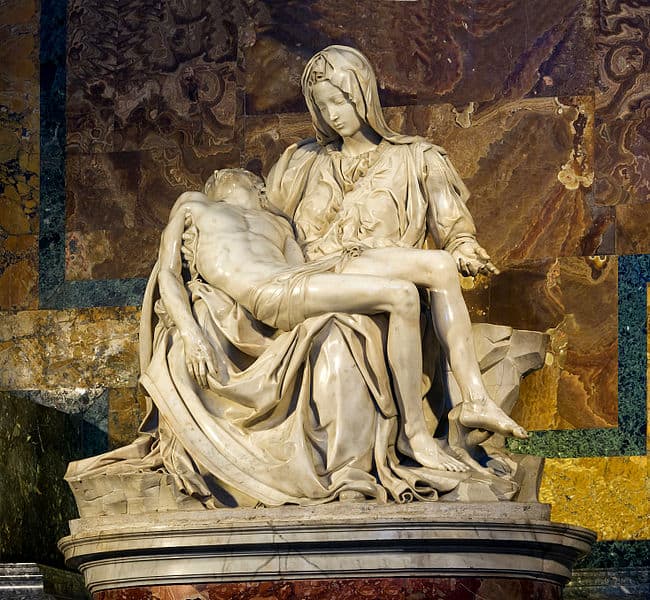 The Pity by Jebulon – Wikimedia Commons

Michelangelo’s Pietà is the first work created by Michelangelo in Rome (1497 – 1499). It was commissioned by Cardinal Jean de Bilhères and placed in the Sacristy of St. Peter’s Basilica. This sculpture represents  young Mary sitting on a rock.

The rock symbolizes Calvary, the mountain where Christ died. Jesus is lying on Mary’s legs, completely abandoned in his mother’s arms. 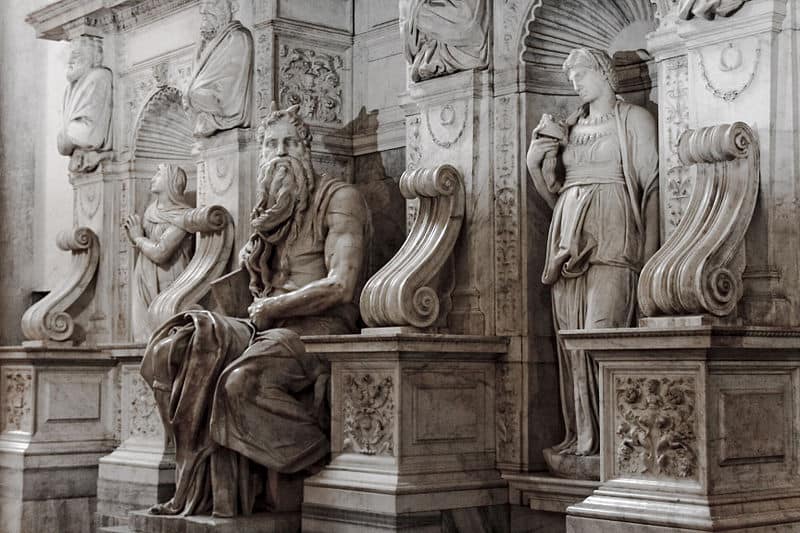 Michelangelo arrived in Rome in 1508.  Pope Julius I called him for the creation of his Christian mausoleum.

According to the project, the Moses was to be one of the 30 statues that were to enrich the tomb of the Pope. In the end, the mausoleum finally got placed at the Church of San Pietro in Vincoli.

This marvelous work completes the very laborious creation of the tomb of Pope Julius II. The statue is very imposing, with Moses stealing the scene from the beautiful statues of Lia and Rachele, both positioned by his side.