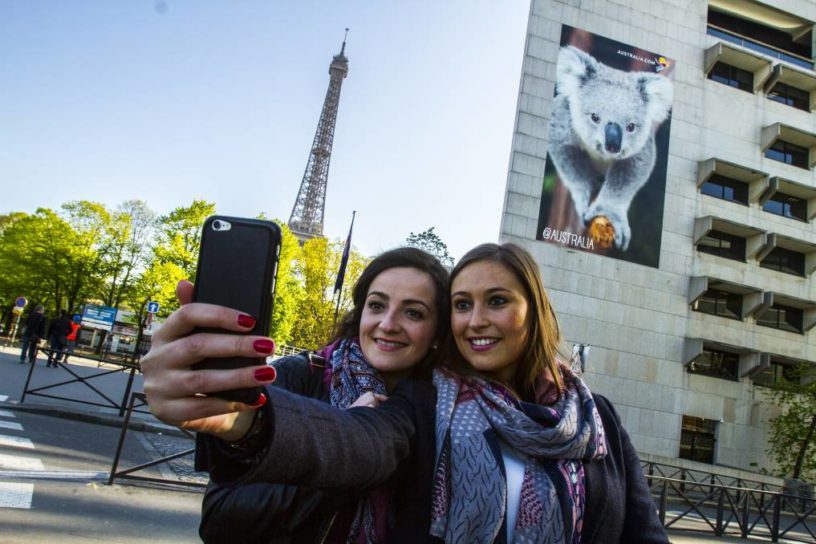 Selfie outside the Australian Embassy in Paris, on Rue de l'Australie near the Eiffel Tower. Image sourced from Illawarra Mercury News 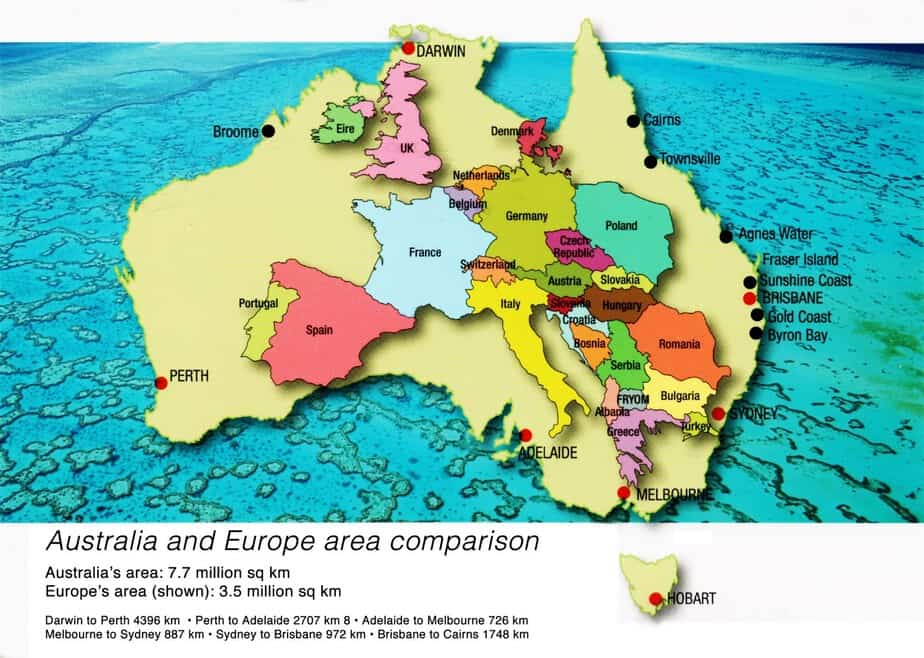 A geographical size comparison of Australia and Europe, image sourced from TLDesigner

Australia, located around 24h by plane from Paris, seems very far from France. Yet it does not prevent one million Australian tourists from visiting the country every year.

Some of them like the City of Light so much that they choose to settle and join the discreet but growing Australian community in Paris. This attraction is reciprocal, and many young French choose to experience Australia via the famous Working Holiday Visa.

Their interest concerns the “Western” part of the Australian culture, what French would refer as “Anglo-Saxon”, but also the Aboriginal culture, whose popularity is growing in Europe. In a multicultural city like Paris, Australians and lovers of Australia have many opportunities to meet and to keep in touch.

Where to meet the Aussies? How to discover the Australian culture in Paris? Here is a selection to help you.

Enjoy a drink at Oz café 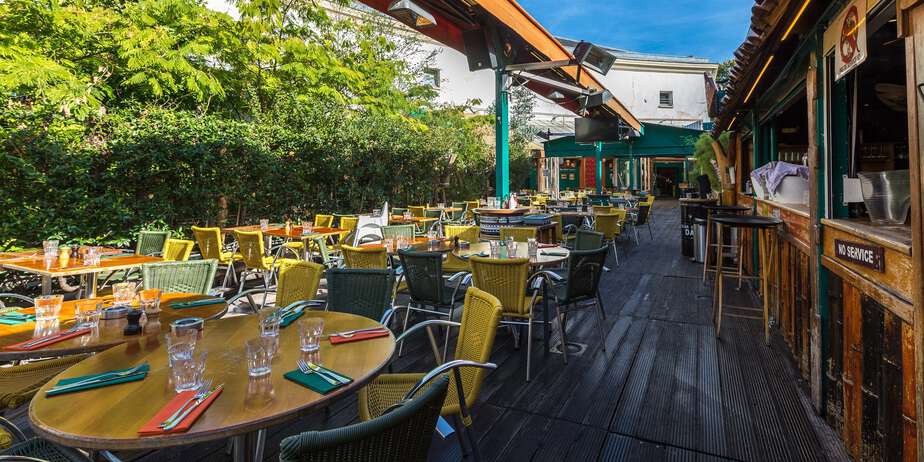 Where to fully enjoy a rugby match of the Wallabies? In an Oz café of course!

Several Oz café exist in Paris, the most famous being the one next to the metro station Denfert-Rochereau, in the south of Paris. There you will feel the Australian atmosphere and culture: relaxed, oriented toward sports and outdoor activities. In the wooden decoration adorned with crocodiles and kangaroos, or maybe in the lovely terrace at the back, you can try the imported blond beers like the Foster and the Coopers, light and refreshing.

They regularly organize events, around sport thanks to the many screens inside, and music with a dancefloor and a DJ. Please note that on Friday and Saturday you will have to pay 15 euros to enter (one drink included) and the place is often crowded. I prefer myself to enjoy a drink in the afternoon (the happy hours are from 4 to 8pm) and enjoy this exotic feeling in Paris.

If you want to eat, the menu fits in the category of the pub food like burgers and fries for a decent price. 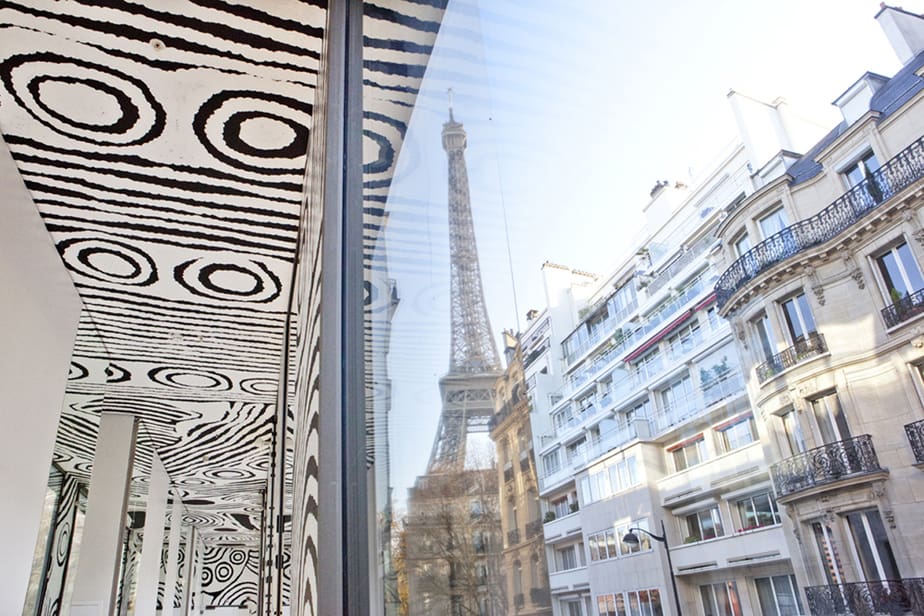 The Aboriginal culture, one of the most fascinating indigenous culture in the world, captivate many French who have the chance to discover it in the Musée du Quai Branly. Opened only in 2006 but already attracting more than one million visitor per year, this museum located near the Eiffel Tower presents the indigenous art of Asia, Africa and Oceania.

The creation of the museum is due to the support of a French President, Jacques Chirac, who was an admirer of these non-western civilizations. The name of the museum which was originally supposed to be “Museum of the first arts”, more or less corresponding to the English expression “primitive arts”, sparked some controversies. Some considered it implies that the aboriginal art was less evolved than the western one.

The Aboriginal art of Australia is well represented. The museum choice is to present very diverse objects, some conceived art pieces, but some made to be mostly practical objects. You will learn about ritual paintings on eucalyptus barks and canvas, admire boomerangs and sculpted masks in what is the largest international commission of contemporary Indigenous art from Australia.

It is easy to feel overwhelmed by the size of the collections, so don’t hesitate to take an audio guide, or if possible, a tour, to make the most of your visit.
Apart from the collections, the architect of the museum Jean Nouvel chose to present the Aboriginal art on the façade rue de l’Université and in the ceilings of several rooms.

The museum proposed to some contemporary Aboriginal artists to reinterpret their traditions. A beautiful example is a massive art piece realized by Lena Nyadby called Dayiwul Lirlmim Ngarrangarni. It is a reference to a mythical story of a fish whose scales transformed into diamonds. Dayiwul Lirlmim Ngarrangarni translates to “dreaming of the barramundi scales“. Located on the roof of the library, it is visible not by the visitors of the museum but by the ones of the nearby Eiffel Tower. 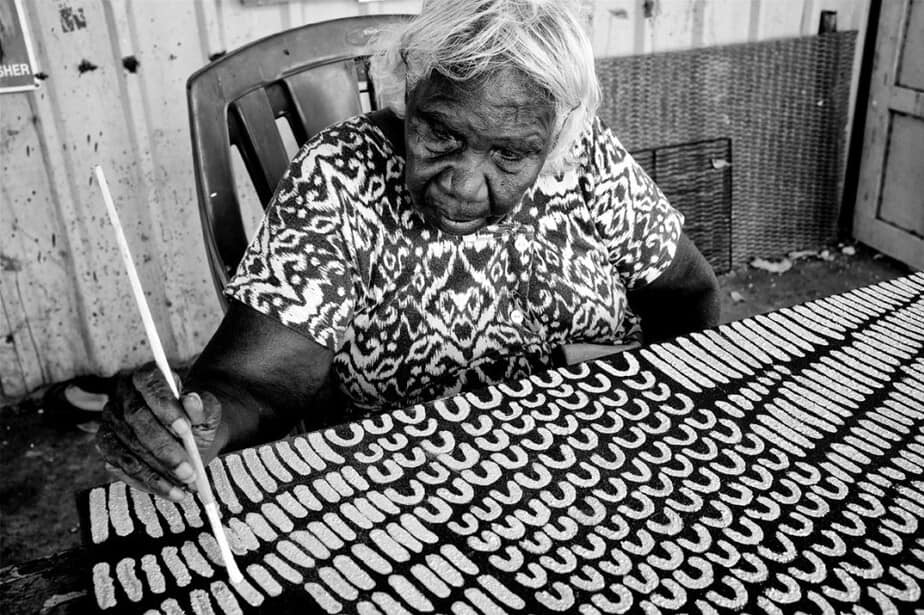 Lena the artist as she works, image sourced from Island Spirit Photography

And if the visit gave you a desire to buy aboriginal art, you can find in the gallery of Stephane Jacob Arts d’Australie (179 boulevard Pereire, appointment needed) and in the one of Nicolas Andrin 46 rue de Seine.

Learn how to play the didgeridoo 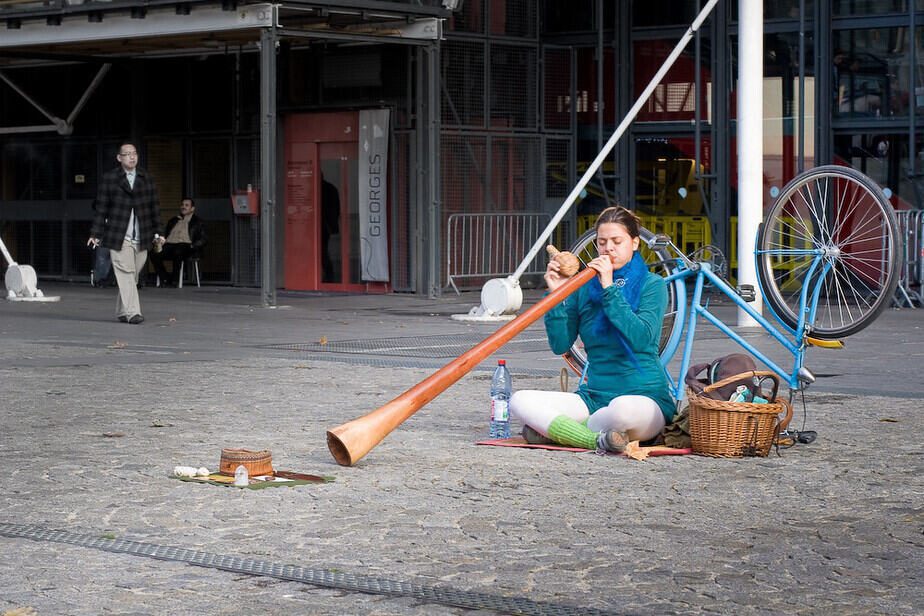 Girl playing the didgeridoo in front of the Georges Pompidou museum, image sourced from Flickr

The big eucalyptus tube, from an aboriginal origine, has its supporters in Paris. The association Vent du Rêve (literally “Dream Wind”, to be understood with a play-on-word with “dream seller”) propose to make the Parisian didgeridoo players to meet and offer some lessons to the beginner. They organize workshops, most of the time supervised by volunteers experienced musician but also sometimes with professionals.

You can find them every Monday in the basement of the café-restaurant “le chant des voyelles”, 2 rue des Lombards in the central 4th arrondissement

If you want to be kept in touch with the Australian community in Paris, apart from the many groups on the social networks, a good way is to check the website of the Australian embassy. It proposes an event section where you will learn about the on-going events related to the Australian culture.

There is also a Facebook group allowing you to meet Aussies, hear about events, and even the local news stories from Down Under.

Do you have the time to go beyond Paris ? If so, one of the most famous villages of the French Riviera Saint-Tropez, home of the artists and the Jet-Set, organizes every year the Festival des Antipodes, with a selection of Australian and New-Zealander movies. 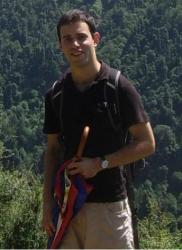