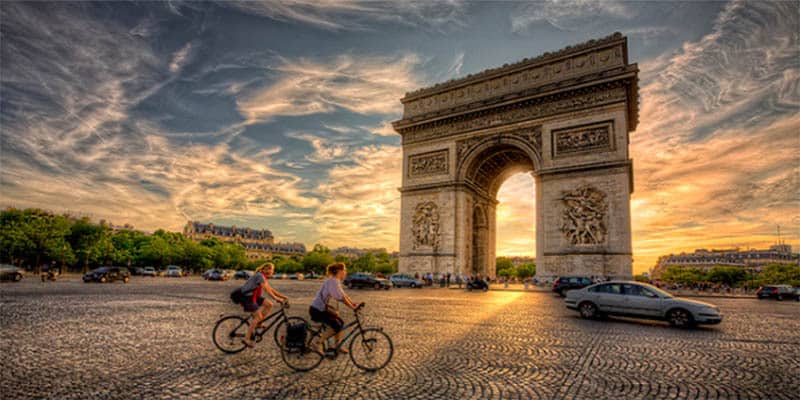 If I tell you “cycling” and “Paris”, you’ll probably think about the Tour de France, which ends on the famous avenue of the Champs-Elysées. Of course, this competition is really important in Paris, but you don’t need to enter it to bike around in the city! In fact, cycling in Paris is actually becoming more and more popular. For the Parisians, it’s a great way to move in the city: cars are not really practical and the subway can be a bit annoying. Besides, a lot of locals want to stay fit and do a little sport, or just want to limit the pollution, so they chose the best option: cycling!

If you’re a tourist visiting Paris, it’s also a great way to discover the city, instead of sitting on the subway all day. By the end of your trip, you’ll feel like a true Parisian!

So if you’re considering cycling when you come to Paris, here is everything you need to know about cycling in Paris!

How to rent a bike

If you want to use bikes while in Paris, you have two options. 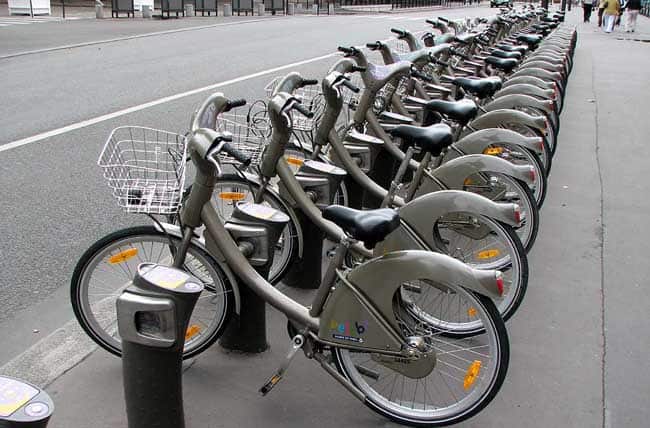 ❖ Firstly, you can use the cycling service of Paris called “Velib’”. When it was installed, it completely changed Parisians’ lives!

The Velibs are really easy to use, and they are pretty cheap so you have no excuse not to do a little sport during your time in Paris!

The system is simple: you’ll find Velib’ stations all over Paris, all you have to do is take a bike, go to your destination and put the bike in any other station once you’re done with it. You’ll find maps of the Velib’ stations on the terminals or you can download the app: “Velib’ officielle”.

You also have to be able to pay the deposit (150€) in case you lose the bike.

IMPORTANT POINT: With the subscription, when you take a bike, the first 30 minutes are free, but if you exceed that, you’ll have to pay for each 30 minutes (1€ for the first one, then 2€, then 4€). That’s the reason why Velib’ are mostly used for short distances and not to do long bike rides in the city. However, you can also use the Parisians’ technique: drop your bike at a station at the end of the first 30 minutes, wait 5 minutes and take another one. This way, you won’t pay the extra money and it may make you discover new parts of the city!

2.) Once you’ve subscribed, you’ll have a personal code. You can’t take several bikes with one code, so if you travel with your family or friends, make sure everyone has subscribed! Little detail: you have to be at least 14 years old to subscribe.

To take your bike, go to any station and follow the instructions on the terminal. To return the bike, put the bike in the station: a green light appears if you’ve locked it correctly. If you arrive at a full station and have no time left, don’t panic! You just have to indicate that you can’t return your bike to the terminal and you will have 15 more minutes to go to another station or wait for someone to take a bike where you are.

A little insider’s tip:
Some stations are located on the highest parts of Paris, they have the sign “V+”. It will take a little effort to climb to these stations, but it will give you 15 more minutes free! So if you see you’re not going to make the 30 minutes, try and find a V+ station. If you have an annual subscription, the free 15 minutes will also accumulate and you will be able to use them another time.

❖ If you’re a big bike enthusiast and plan on cycling all day, maybe the Velibs are not for you. Indeed, if you keep it all day, it can become quite expensive and it’s a pretty heavy bike so not perfect for long rides in the sun! In that case, you should rent a bike in one of the numerous bike shops in the city. The prices are around 20€ for a day.

What are the best places for cycling? 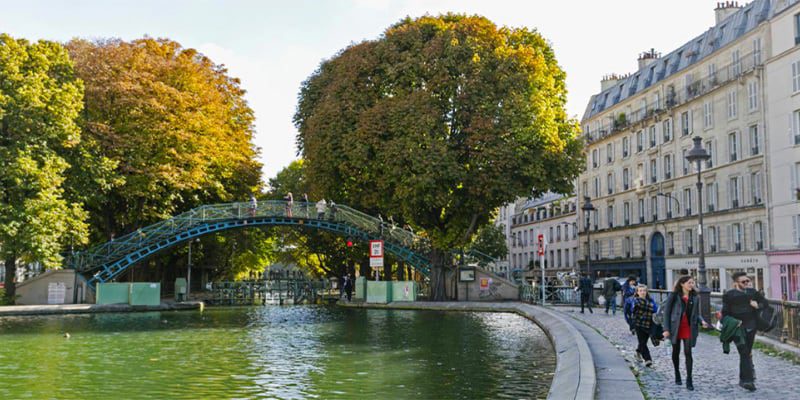 This canal is one of the Parisians’ favorite places to hang out! It’s perfect for a nice walk during the day, and in the night you’ll find bars and cafés that are really loved by the locals.

It’s also the perfect place to go cycling (and to grab a drink afterwards)! The banks of the canal are lovely and perfect for a ride. The big advantage: on Sundays, the banks are closed to cars in order to let everyone enjoy the canal at its best!

This is actually part of a bigger initiative called “Paris breathes” that is trying to reduce pollution in the city and make it more enjoyable for Parisians. If you’re a walking or cycling enthusiast, be sure to check the other places that are closed to traffic! (https://www.paris.fr/parisrespire) 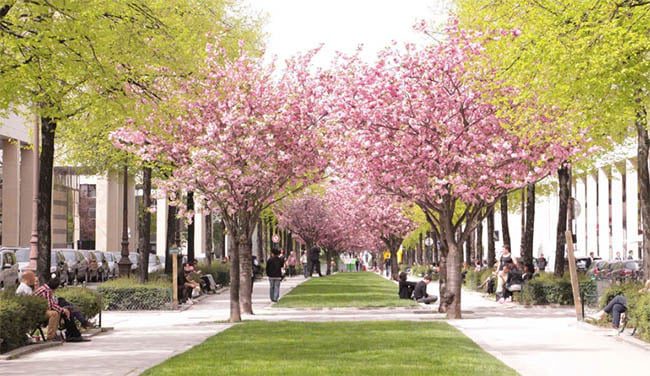 The Coulée verte is one of the most beautiful and charming spots in Paris, and it’s perfect for some cycling on a summer day! It goes from Bastille to the frontier of the Bois de Vincennes (the forest on the east of Paris). It was created in 1988, on the location of an old railway, and it’s 4.5km long.

A bicycle path was created in the second part of the Coulée verte, from Tunnel de Reuilly to the Bois de Vincennes. If you’re a nature lover and feel a bit oppressed in Paris, a ride on this road is guaranteed to make you feel better, as you pass near the beautiful trees and flowers of the Coulée verte.

If you thought the Coulée verte was a bit too small and want to continue cycling, you can enter the Bois de Vincennes. This forest is what remains of a bigger forest used by French kings to hunt. It’s the biggest green space in Paris and is one of the two big Parisian forests with the Bois de Boulogne in the west of Paris. Even if you’re not in the center of Paris, it’s still a great place to cycle and walk around. Here you’ll be able to exercise as much as you want on all the different paths, surrounded by trees.

❖ The banks of the Seine 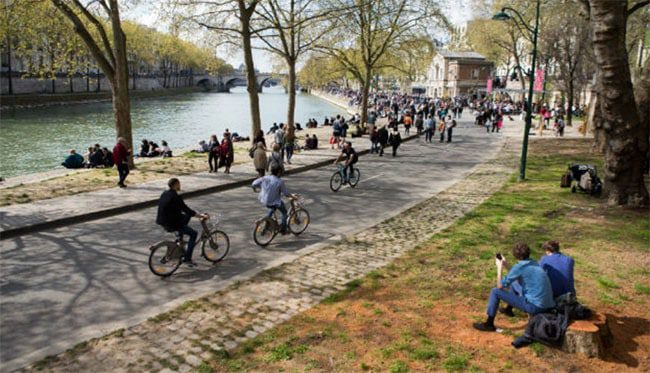 Like the Canal St-Martin, the banks of the Seine are closed to cars on Sundays. However, you won’t be able to go really fast as a lot of Parisians like to walk or sit on the banks.

If you don’t mind the speed, cycling on the banks can be a great way to discover Paris and see the big landmarks. You can start at Notre-Dame and go straight to the Eiffel Tower, without a chance of getting lost! You’ll be able to see the Louvre Palace, the Invalides, the Orsay museum and every big monument you should take a look at while you’re here. In the evening, you can just sit on the banks with all the people, drink beer or wine and feel like a true Parisian!

These were a few ideas about the best places to go cycling in Paris, but you can of course just take your bike and explore, it’s the best way to discover our beautiful city! 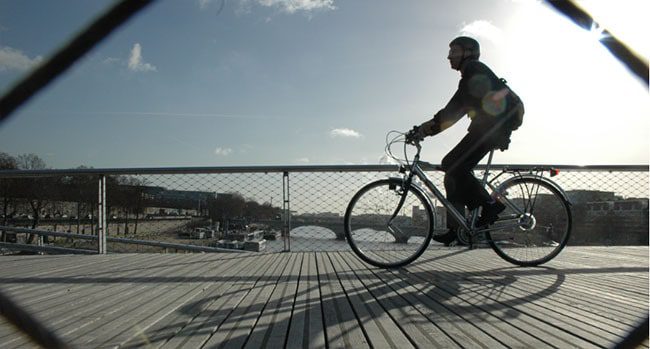 If you have been to Paris, you may already know that Parisians are not the best when it comes to safety on the streets. I can’t say that everybody drives badly of course, but I do think the traffic in Paris can be a bit wild sometimes and it can be intimidating. A lot of people are afraid of taking a bike in Paris!

But don’t worry, studies show that it’s actually not that dangerous cycling in Paris, it’s even less dangerous than walking in the city! Of course, you still have to be careful like in every city, but if you follow these simple rules, you’ll be able to enjoy your stay and will never want to go back to the subway.

There you go! Now you know everything you need to know, so grab a bike and come to Paris!

Lily was born and raised in Paris. She is now studying political sciences and social sciences in the Latin quarter. 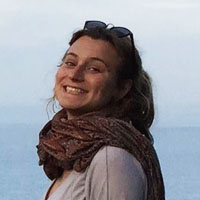 Lily was born and raised in Paris. She is now studying political sciences and social sciences in the Latin quarter.