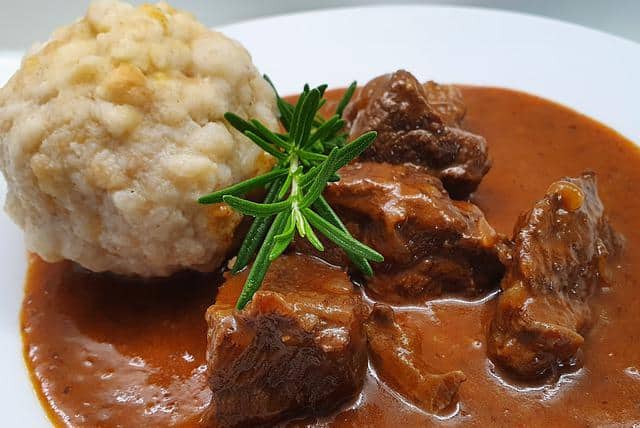 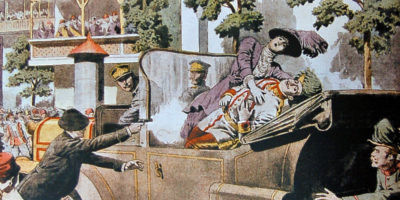 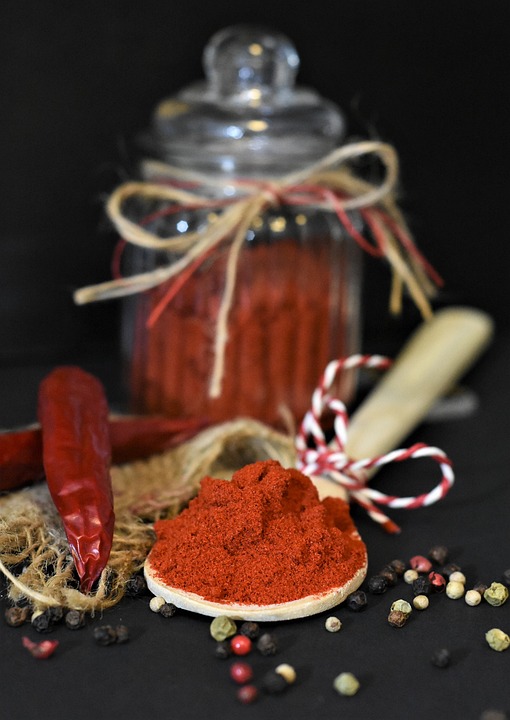 Budapest is a cultural melting pot.

Traditional Hungarian food is a reflection of the local climate as well as Austrian, Ottoman, Slavic, Jewish, and Romanian influences.

The croissant wasn’t invented in France. It originated in Hungary’s capital Budapest after the 1686 siege when the city’s bakers created the pastry to mimic the crescent on the Turkish flag, marking their victory over the Ottoman army – sorry France.

Goulash soup is still a signature dish since nomadic Hungarians cooked it in cast-iron kettles a thousand years ago.

Although, with time the ingredients changed and new culinary creations have slid into the city’s gastronomy mainstream.

To appreciate Budapest’s cultural heritage make a point of eating in places that serve the most reliable traditional fare.

Budapest has lots of touristy traditional eateries that locals hardly ever enter unless they work there, but you’ll mainly find Magyars at these classic spots.

There may not be an English-language menu available, but if you’re looking for genuine Hungarian cuisine amid a crowd of genuine Hungarians, these places all regularly satisfy city residents with regional food fixes.

This city is good for gourmet trips at an affordable price. 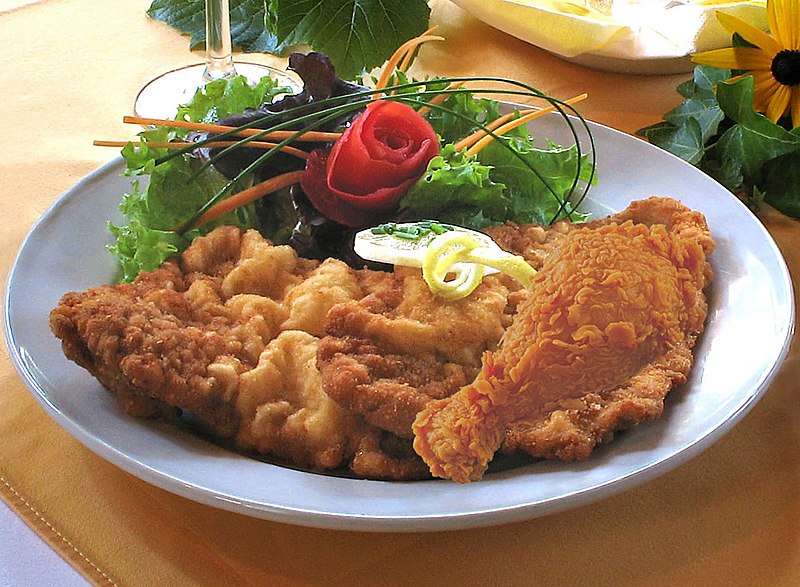 Pozsonyi Tavern caters for patrons from all over the world with its homey atmosphere, but it’s mostly people from the neighbourhood that crowd this corner eatery of District XIII.

With its checkered tablecloths and booths that can comfortably accommodate an entire family.

Tourists also visit the place. If you want to eat a great Hungarian meal, you should try this place which is called by the locals Kispozsonyi.

This eatery offers delicious meals in generous portions size commensurate with the pricing. The menu features all of the important classics, in multiple languages.

The juice and dessert should not be skipped. Overall, their food presentation game is on point. 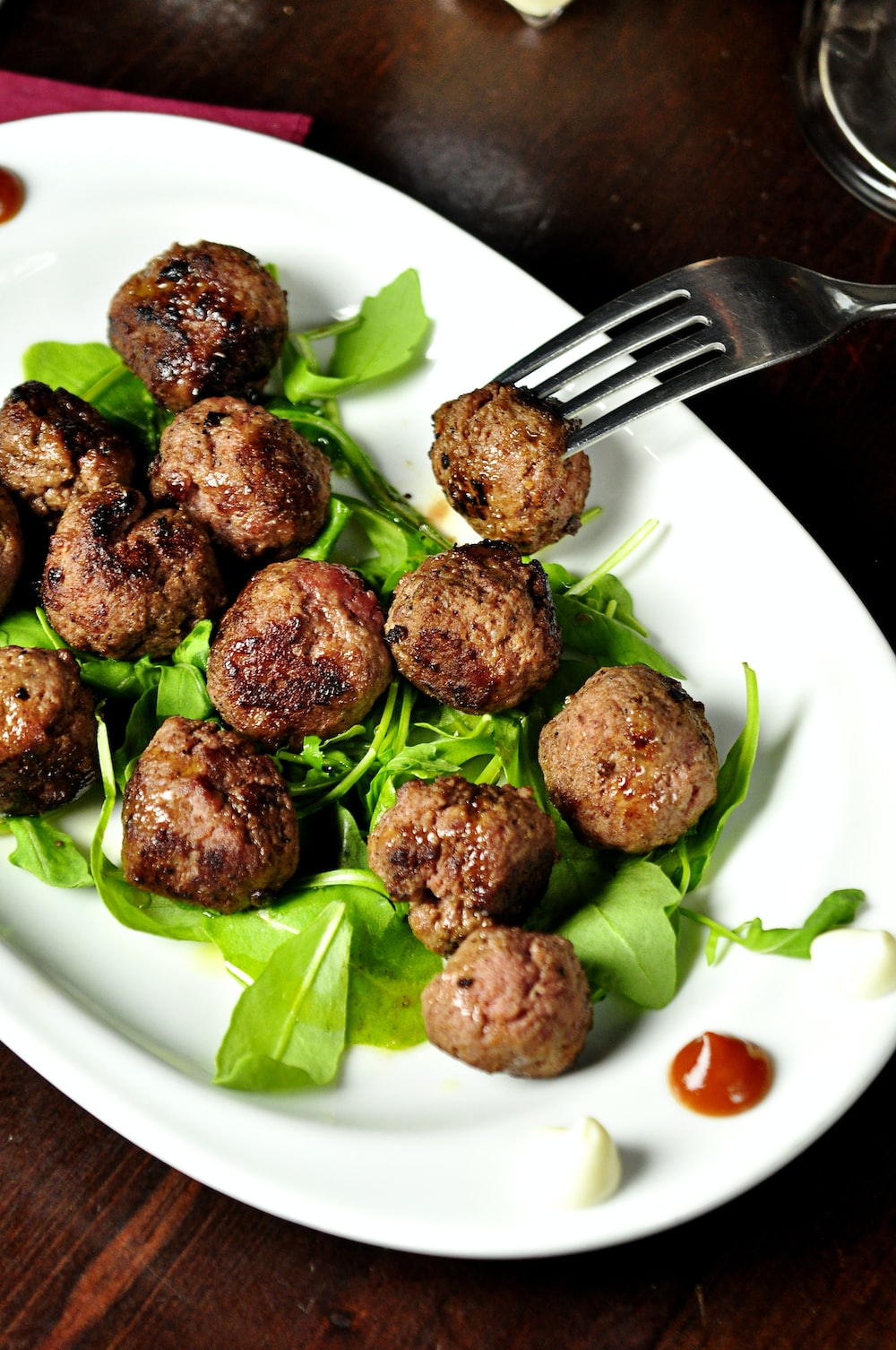 Photo by Emiliano Vittoriosi on Unsplash

Meat Boutique rapidly earned a name among the gastro-fans of Budapest. Located at the Chain Bridge, one of the most beautiful parts of the city, it offers a unique view of the riverside of the Danube and the city while you enjoy your meal.

The ownership is both Hungarian and Serbian, and as you would expect meat is at the heart of the menu.

The menu is renewed every fortnight so as to constantly surprise customers with new creations using seasonal ingredients.

Their chef constantly reconstructs the classical Hungarian recipes so no matter if you eat them a million times they never taste the same.

Be it a romantic dinner, a cheerful night with friends or a business lunch, the meat boutique awaits you to spend an amazing time and meal!

Try out the Charcuterie platter, which includes deer salami and paprika salami and Serbian beef meatballs. 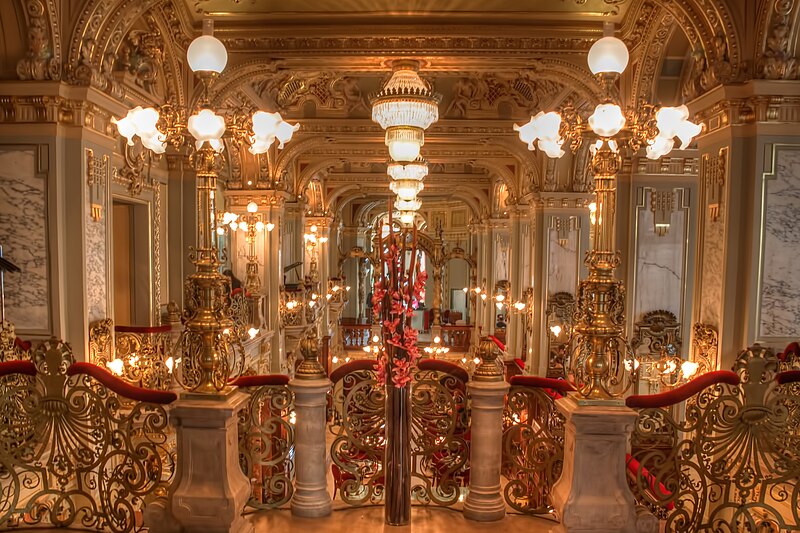 Interior of the cafe Image by Sandy Horvath-Dori from Wikimedia

One hundred twenty-five years ago, the opulent building was designed as the Hungarian headquarters for the New York Life Insurance Company.

New York Cafe Budapest is touted as the world’s most beautiful cafe. With an opulent interior, bathed in gilt and velvet and a menu of sumptuous dishes.

Situated in the Boscolo hotel on the Pest side of the river,  this is the place to try Hungarian ‘Mangalica’ aged ham with horseradish and soft-boiled egg; marinated fillet of salmon; roasted fillet of pike-perch with beetroot risotto; and a Viennese sacher torte. 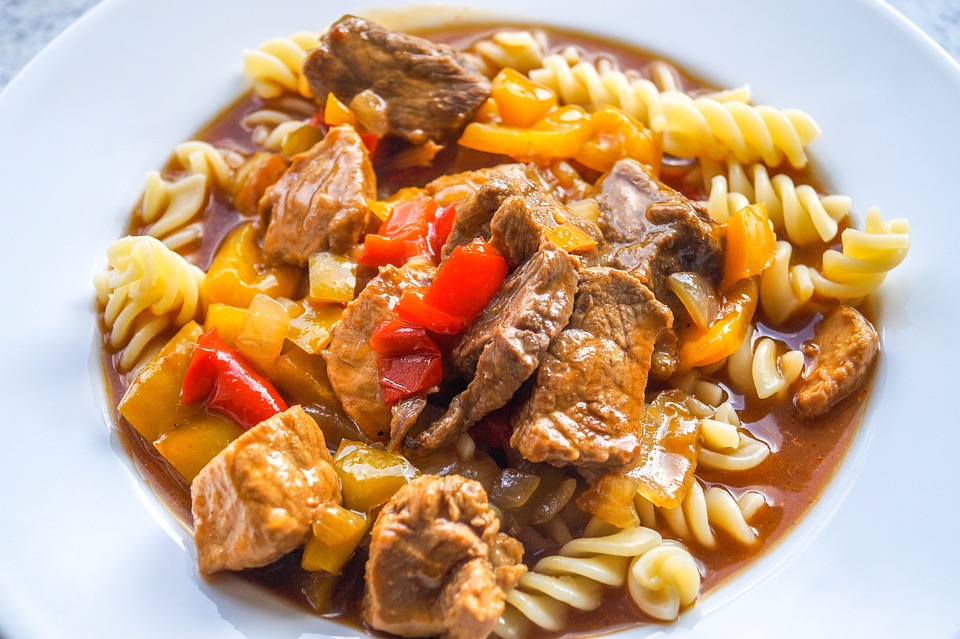 Image by Matthias Lipinski from Pixabay

Rakoczi Restaurant is well known for its great service and friendly staff, that is always ready to help you. Prices are equal to the quality you get.

Thanks to the friendly atmosphere (and the cheap house beer), the restaurant is a favourite hangout of residents in the neighbouring buildings, but tourist groups in search of hearty Hungarian food are not a rare sight either, coming here to dine amid an authentic ambience of red-and-white checkered tablecloths, paprika garlands, colourful pottery and Hungarian hussar regalia.

You’re unlikely to go wrong with the goulash, the crispy veal schnitzel and I always finish my meal here with a couple of túrós palacsinta, crepes filled with sweet-tart cottage cheese.

During the warmer months, try to score a seat at the outdoor tables. After your meal, visit the Rákóczi Market across the street, where time has stopped in around 1980

Get a taste of genuine Hungarian hospitality. 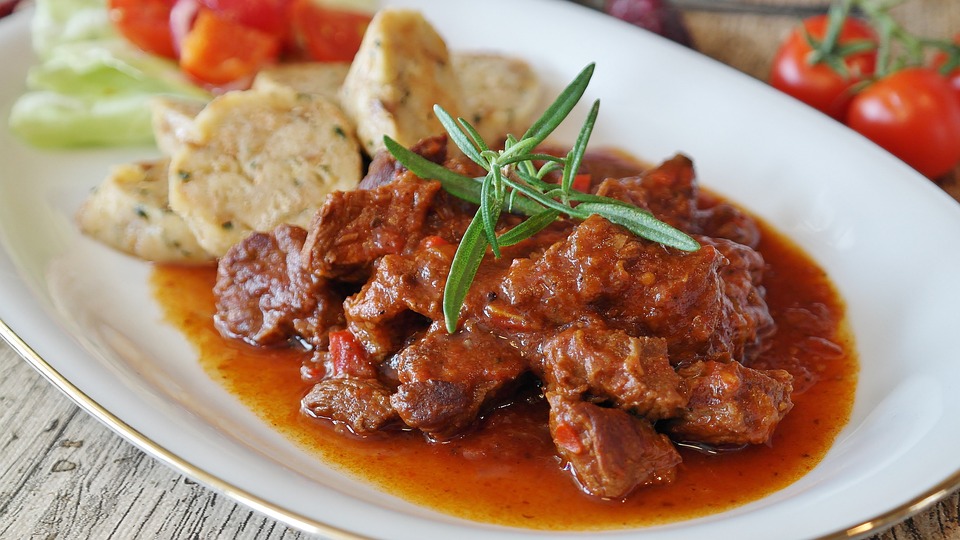 Image by RitaE from Pixabay

“Gettó” refers to the Jewish ghetto, what this neighbourhood became during the winter of 1944, the darkest time of WWII in Budapest.

Getto Gulyas is all about the comfortingly soulful stews that have nourished & nurtured generations of Hungarians.

To enjoy these Hungarian dishes advance reservation is an absolute must. 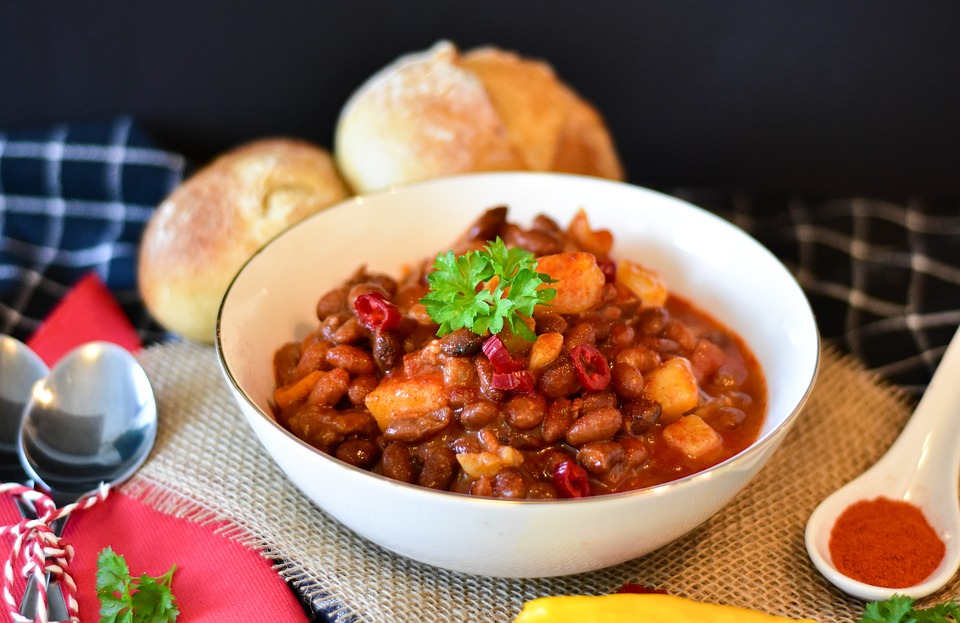 Image by RitaE from Pixabay

This highly esteemed establishment in the Kőbánya district of Budapest has been operating since 1906 but has operated in its present form since 1985.

in the menu, you can find a staggering 120 options.  try The goulash, Újházy meat soup with tender vegetables, fried Mangalica dish, veal with paprika stew and Slovakian dumplings topped with sheep’s cheese and thick sour cream.

The portions are served on gigantic plates. The tavern is strongly recommended if you are in the area, people with a huge appetite and anyone else who appreciates the honest cuisine of a family-run restaurant.

Located on Szófia Street,  Regős Tavern is a family business.

Hungarian and Vegetarian cuisines are famous around the world and visitors advise you to try them at Regős Vendéglő.

Order nicely cooked broth, antipasto and turkey breast. Serving good che, biscuits and crepes is the hallmark of this place.

Lunch is a very important meal at Regős: there’s no set lunch menu, so patrons can choose from six kinds of soup and 17 main dishes to put together the perfect lunch combination, even on weekends.

The hot paprika sauce that locals like to pair these dishes with comes in a separate container, giving you a chance to season your meal just the way you like it.

The cheerful waitstaff meets you at this spot all year round.  The fabulous service is something these restaurateurs care about. Prices at this restaurant are worth attention since they’re fair. 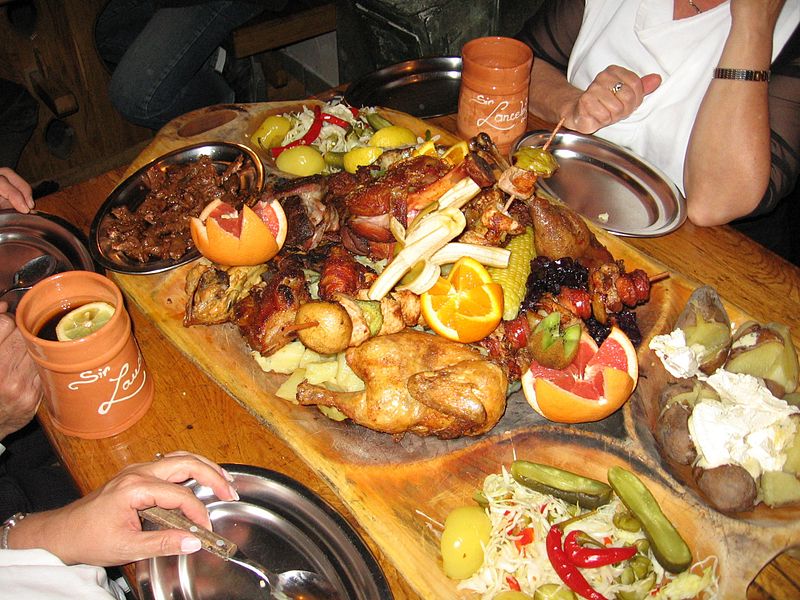 Image by Assayas from Wikimedia

Kispiac Bisztro is a great place to stop by for lunch when you’re touring Budapest’s Liberty Square and the nearby financial district.

Professionals and executives mix with tourists in this restaurant, which specialises in hefty, high-calorie dishes.

Some of the most popular choices at Kispiac Bisztro include pull-apart tender pork belly, roasted chicken and duck, as well breaded veal liver.

Kispiac Bisztro’s smoked sausages and bean soup with sour cream are also highly recommended. With a limited capacity of 20 seats, it’s a good idea to get there early.

Indulge in the decadent roasted goose liver and wild boar stew plus many other dishes that are featured on the dining tables of the local aristocracy.

The recipes might be old but the ingredients are high-quality.

Mainly serving office workers it gets deserted in the evenings, so come for lunch rather than dinner. 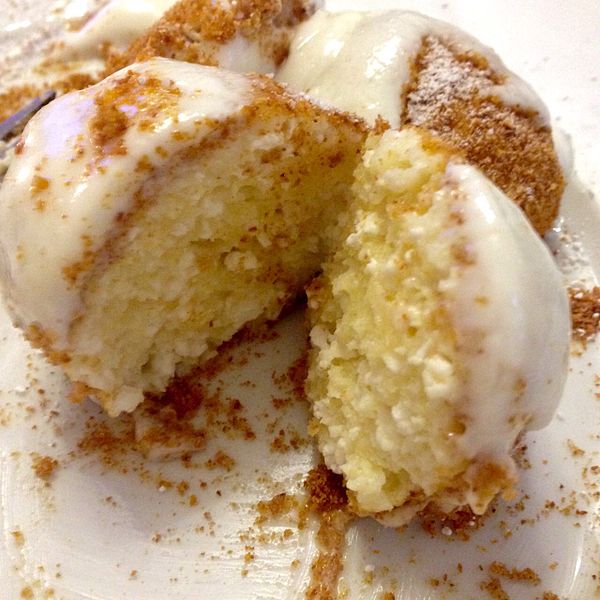 Bambi Eszpresszo is one of Budapest’s remaining original presszós, which is a neighbourhood breakfast joint and bar.

Its doily tablecloths and red, faux-leather chairs have reportedly been used since its operations began in 1961.

The waitstaff in dated uniforms serving food on retro plates and cutlery, dining at this beloved establishment will make you feel like time has stood still.

Drop by here to join the locals and enjoy sausages and scrambled eggs, with coffee served with sugar cubes.

During summer, you can order a cold beer and relax on the outdoor terrace after a day of sightseeing.

After a meal at Eszpresszo walk to the Bem József Memorial Park.

The Great Market Hall in Budapest (in Hungarian Nagycsarnok or Vasarcsarnok) was built in 1897 and is the most beautiful and largest of all Budapest markets.

The market hall is not only ‘Great’ in its size but also most importantly it is central – just a 5 min walk from the city centre.

It is Budapest’s glorious and mammoth food market – well worth a visit if you’re after some goodies to take home.

On the ground floor, expect aisle after aisle of every possible sausage (the paprika-spiced piquant concoction aka ‘csabai kolbasz’  ground (sweet and smoked) and fresh paprika itself; honey; goose liver; and wines.

The first-floor houses street food stalls and stashes of souvenirs, whilst the basement is houses with fishmongers and kitchen goods stalls.

Budapest offers many options to eat out with venues ranging from standing-only or self-service eateries to lunch-only venues and sit-down restaurants.

Hungarian cuisine has imprints of Turkish, Austrian, and Jewish influences. These paprika and sour-cream laden food are meaty and packed with vegetables.

The local wine is either sweet or savoury, while desserts are usually pastries and cakes with generous fruit jam fillings and nut toppings. Some places serve them the old-fashioned way, while others give meals an innovative twist.