Paris - Activities & things to do, Paris - Neighborhoods and where to stay, Paris - Walks

Best things to do in Paris First District 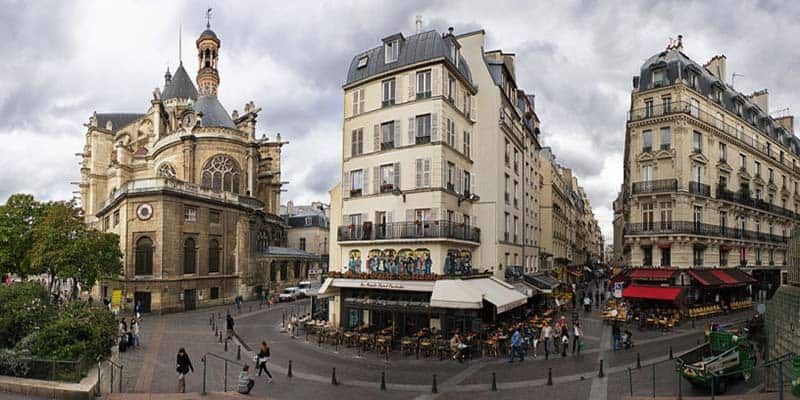 Best things to do in Paris First District

As you may know, the city of Paris is divided into twenty different arrondissements, which are administrative districts. They are all different from one another for several reasons. Each district is special in its own way. If you’re coming to Paris, you will visit many of them for sure! Some are more touristy than others. Some are quieter than others! But all of them are definitely worth the visit.

Today I will talk about Paris first district. It is located right in the middle of Paris. It is the center of the capital. Real estate is pretty expensive. But it’s a very lively district. Parisians love to meet with friends and spend some time in the first district, be it for shopping or for cultural enrichment! If you’re curious and want to know some of the best things to do in Paris first district, read on! From Paris greatest landmarks to Paris hidden gems, the first district is perfect if you want to fully experience the city!

Have a walk in Jardin des Tuileries

First on my list of best things to do in Paris first district is obviously to go to the Jardin des Tuileries. It is actually the oldest garden of Paris. It is located in the right bank of Paris, between the Louvre Museum and the Concorde Square. Its construction was ordered by Catherine de Médicis, a French queen. She reigned over France from 1547 until 1559. She wanted to decorate the surroundings of the Tuileries palace – that no longer exists for that matter , because she used to spend her spare time there. The Jardin des Tuileries got its name from the tile factories that stood there in the past. The way the garden looks now was designed by André Le Nôtre, a landscape architect. He’s also the man who designed the garden of the Palace of Versailles! It is a “jardin à la française“, based on symmetry and long perspectives!

See all the best art masterpieces at Musée du Louvre 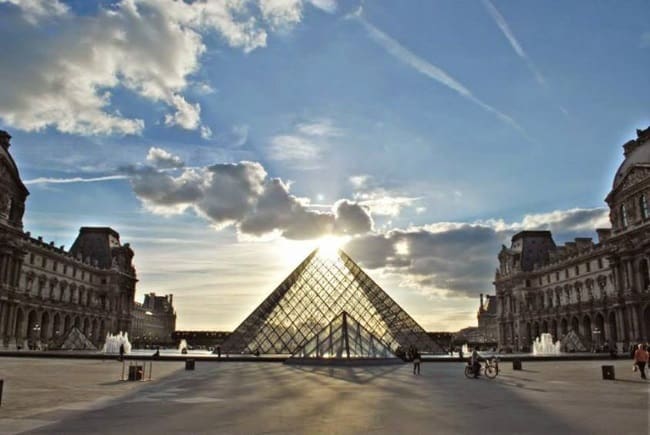 One of the best things to do in Paris first district is obviously to visit the Louvre Museum. It is the biggest and the most famous museum in the world. The Louvre is known for preserving works of art and antiquities since the Ancien Régime. The museum collections kept increasing and evolving throughout the years.

Antique civilizations, the most famous artists all left their marks on our history and on our world. The Louvre Museum gives us the opportunity to have a look at all this heritage. You have to visit the Louvre Museum whether you’re staying in Paris for a large amount of time or not. It would take several hours, possibly even days, to see everything there is at the museum. You should have a look at the museum’s map on its website, to have a clear idea of the works of art you absolutely have to see and where they’re located within the museum. Because it’s kind of easy to get lost in the Louvre! This will save you some precious time and will guarantee you to see your favorite masterpieces! 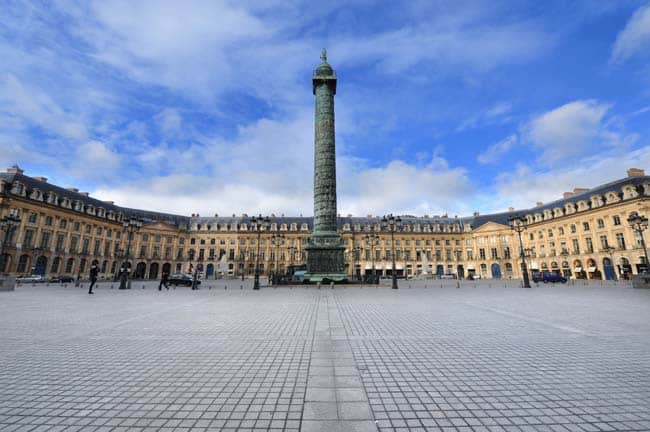 For luxury lovers, a great thing to do when walking through Paris first district is to see the Place Vendôme. Being one of the most luxurious and exclusive squares of Paris, it is surrounded by world famous Ritz Palace and the most renowned jewelers of Paris.

The square’s construction was decided by Louis 14th who wanted a deluxe space in which grand royal events could take place. The bronze column erected on the middle of Place Vendôme is inspired by Trajan’s Column in Rome. It commemorates the Battle of Austerlitz and was made of melting down 1200 canons taken from Russian and Austrian armies. 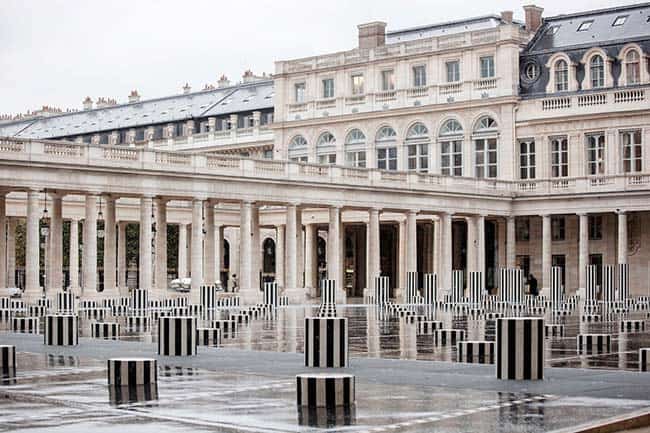 The palace is located in Paris first district. People who visit Paris for the first time usually don’t get to see the Palais Royal. To be honest, it is not that famous after all. I consider it to be a hidden gem! Because it is only known by the locals! It is stunning, so it is totally worth the visit! If you get to the garden, you will fall in love with this place. The Colonnes de Buren is also a great place to take some pictures because it is an original and fun place!

Have a break at Église Saint Eustache 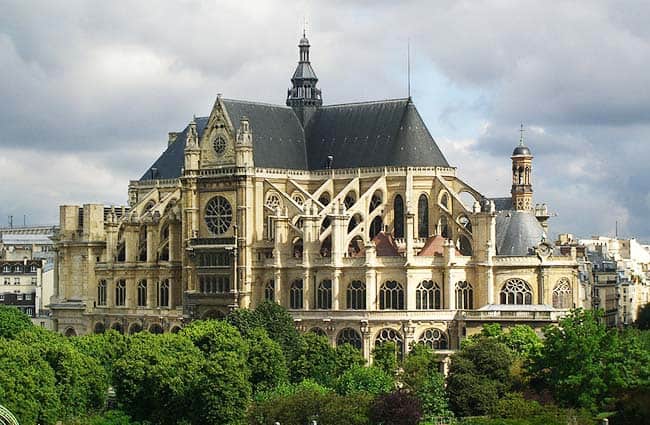 Right in the heart of Paris, you will find the Church of Saint Eustache! Its construction began in 1532 and ended in 1633. Its style is late gothic architecture, just like Notre Dame, but also has some Renaissance details. You will find the church between Les Halles and the Montorgueil neighborhood. I love this church, it gives a special touch to Paris first district look. And I also love the fact that whenever I enter the church, I feel so at peace. Outside there’s the crowd and the noise, but once you get inside it is all so quiet and peaceful! You will also notice all the Renaissance details that makes it even more unique and one of my favorite Paris churches! 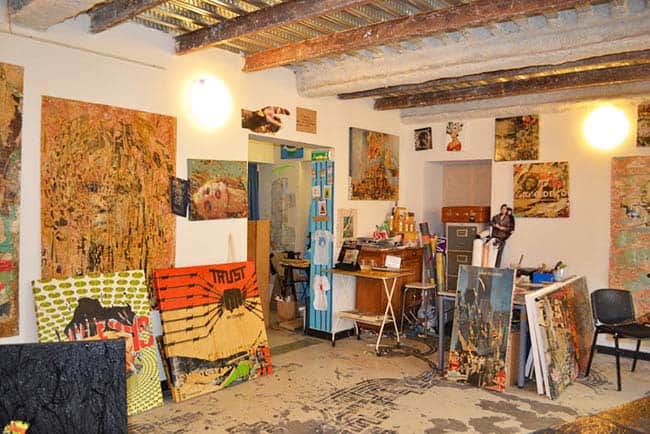 Within Paris first district, you will find an extremely peculiar building. It is located on the 59th of Rivoli street. On 6 floors, the building which used to host a bank, but it was then turned into a squatting for artists. Thanks to the increasing popularity of the artists, it is now a building where many artists work together and exhibit their works! The façade of the Haussmannian building looks nothing like the other ones on the Rivoli street, as it’s a (temporary) work of art by itself. It really stands out! Now institutionalized, I highly suggest you enter the place filled with colorful and amazing paintings, sculptures or photographs made by 30 talented artists (15 permanents, and 15 temporaries, that are here for three to six months). The entrance is free, so you really have no excuses!

Shop at the popular Les Halles

Les Halles is located in the center of the city! It used to be a fresh food market until it turned into a shopping mall in 17! You would think that there’s nothing special about a mall, and I could say that you’re right. But I consider Les Halles to be kind of a big deal in Paris first district. All the Parisians know this mall and shop there. Plus, practically all the metro lines go through Les Halles. So you will eventually go to Les Halles for some reason. It really is right in the center of Paris.

At Les Halles, you will find regular stores, such as H&M, Zara, Mango, Gap, and many more! But you will also get to know other stores like Maisons du Monde, which is a furnite and home decoration store! Everything they sell is so original and cute! You might find a funny alternative for a Paris souvenir! Les Halles is very famous. Many locals go to Paris first district just to go to this mall. And thanks to its great location, it is also the perfect meeting point to start a walk through Paris surrounding districts! 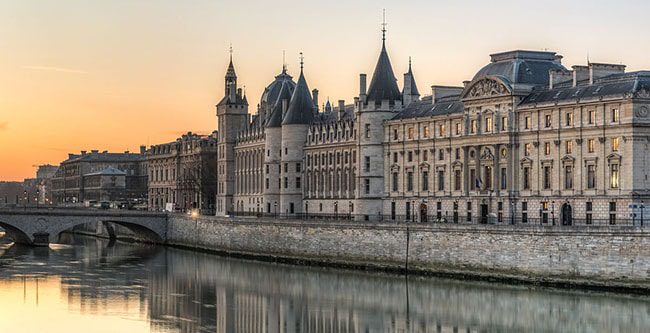 Another thing to do in Paris first district is to visit the Conciergerie. The building used to be part of the King’s palace from the 10th century up to the 14th century. It then became a prison. During the French Revolution in 1789, over 2000 people were imprisoned there before getting executed. This is where Queen Marie-Antoinette spent her last night before being beheaded in 1793 at Place de la Concorde. When visiting the Conciergerie, you will actually get to see the cell in which she spent her last moments. The grand hall with gothic arches is one of my favourite parts of the Conciergerie! I’m sure you will enjoy visiting the historic building! It is a very interesting landmark! 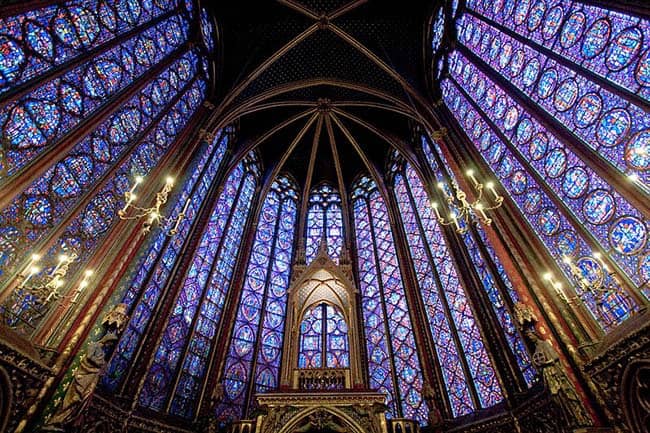 The Sainte Chapelle dates back from 1150. One of the major things to do between the Louvre Museum and the Notre Dame Cathedral, it was commissioned by Louis the 9th to house Jesus Christ’s crown of thorns he brought back from the crusade. The chapel is a very good example of gothic architecture. The stained glass is particularly impressive! The pillars are very small and thus give the impression that the roof is held only by the glass.