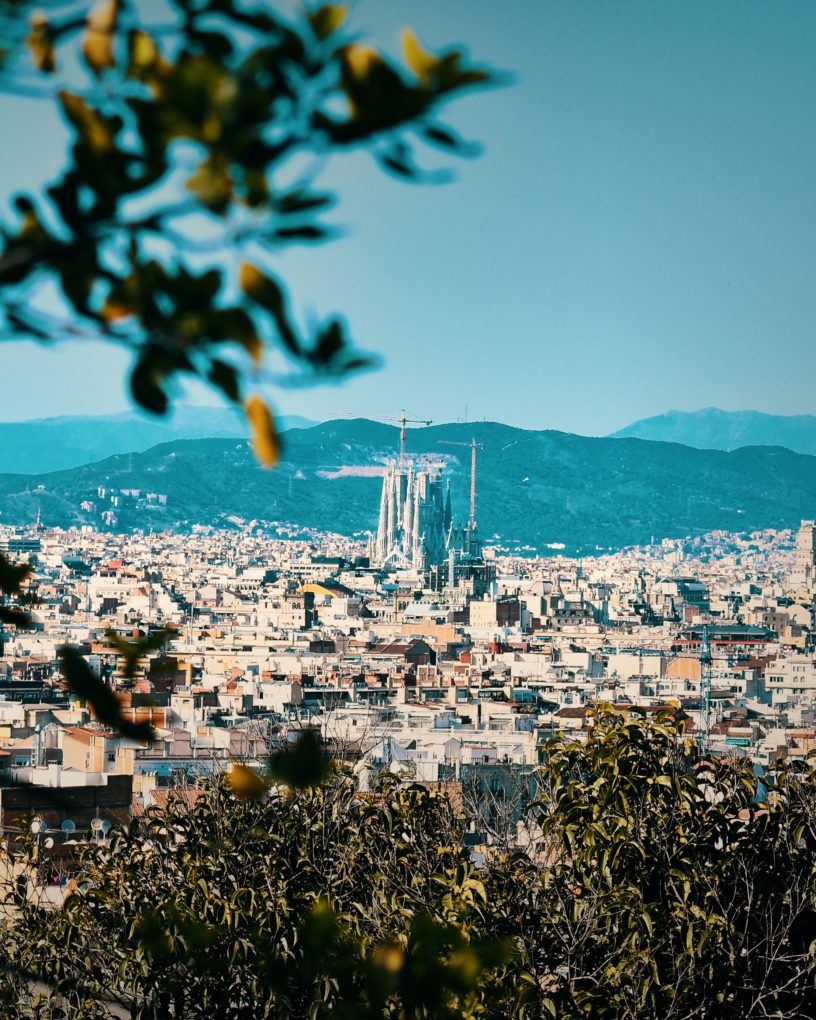 Where to stay in Barcelona? Photo by Lucas Neves on Unsplash.

So you have made the decision: Barcelona it is! You have made a great choice and this is going to be a trip you will never forget. The culture, energy and colour of the city will no doubt warm your heart and leave you wanting more.

While they always say ‘location, location, location’, it is difficult to go wrong in this incredible city. If it is your first time visiting Barcelona, I would definitely recommend staying central. It is a small enough city that you can see a lot of it by foot and if you are centrally located, it makes this easier.

Below is a list of my top 3 areas to stay in Barcelona, with an alternative option included as a bonus for the introverts (like me). Read on and get yourself excited!

1. Get front and centre in the Gothic Quarter

If you want to be staying central, this is where you need to be.

Barcelona’s Gothic Quarter (or Barri Gotic) is part of the ‘Ciutat Vella’ (The Old Town) in Barcelona. Also included in the Ciutat Vella is El Raval and the Parc de la Ciutadella. The Gothic Quarter however, is at the real heart of Barcelona and it sits beautifully at the edge of the coast, just behind Port Vell. 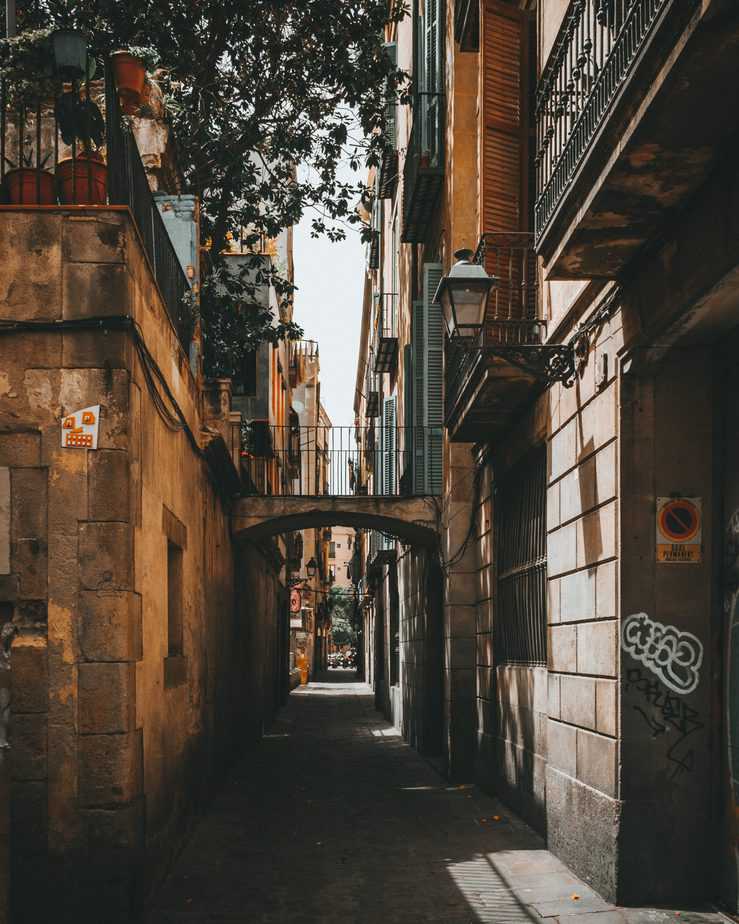 The narrow streets of the Gothic Quarter have a real old world charm. Photo by Herr Bohn on Unsplash.

The area is well known for its incredible history, medieval architecture and unique layout. The Gothic Quarter was established during the first century, when the Romans arrived. Remains of the Roman Barcelona can be found underground at the Museu d’Història de Barcelona (MUHBA).

In addition to this, the tall old buildings and narrow, winding cobblestone streets will make you feel like you have time travelled your way out of the 21st century. 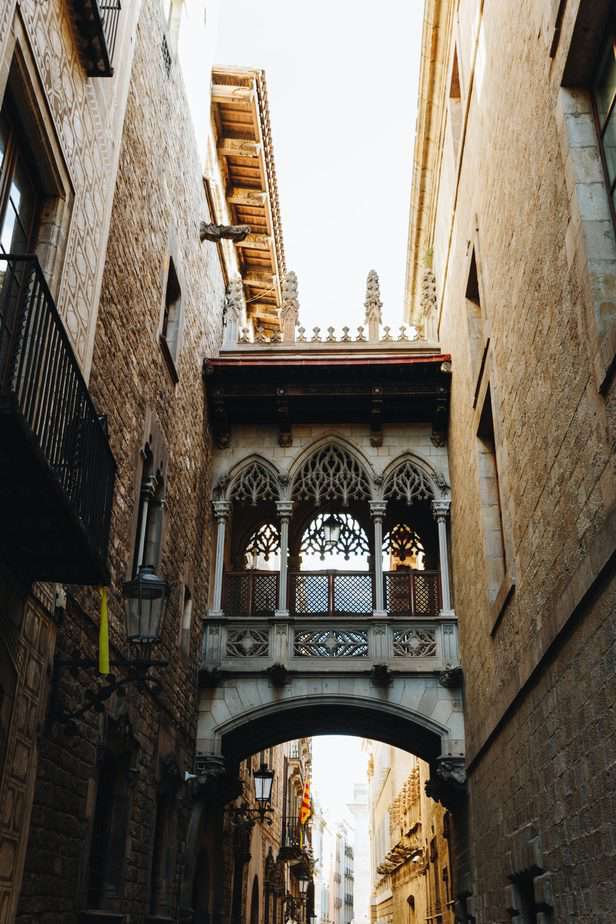 Historical architecture in the Gothic Quarter. Photo by Brandon Gurney on Unsplash.

I would recommend looking for somewhere to stay that has a great rooftop view. If your budget can handle it, the Ohla Barcelona luxury hotel is extraordinary and filled with creative quirks. It has a rooftop swimming pool and view that is hard to match.

If hotels and/or rooftops are just not your thing, AirBnB is great for finding locally owned gems to rent. The Gothic Quarter is as well known for the creative culture it harbours and any AirBnB you look for in this area is bound to have been pulled together with style.

2. Find your groove in the bustling Eixample

If you are giddy for Gaudí, Eixample is where you want to rest your head as it holds four of the famed architect’s works. Casa Batlló, La Pedrera (Casa Milà), Casa Calvet and La Sagrada Familia, are all located in Eixample. While Eixample is a much larger area than the neighbouring Gothic Quarter, Gaudí’s works can mainly be found around Passeig de Gràcia, which cuts through Eixample. This is with the exception of La Sagrada Familia, which sits in the North-Eastern corner of the district. 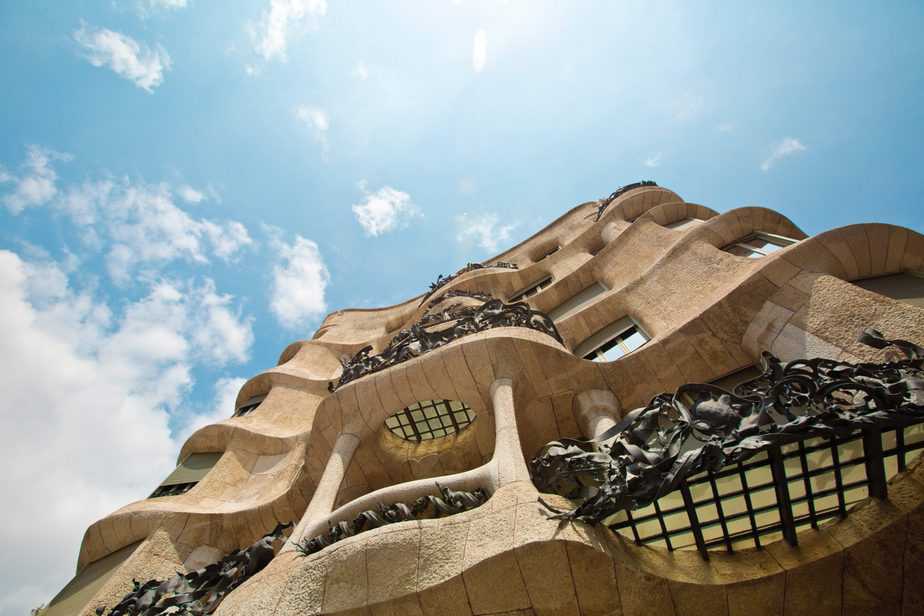 If Gaudí is not the main attraction for you, not to worry, Eixample is still a great place to stay. It is super central and hotels or AirBnBs in this area will be easy to get to, with the district’s hyper-organised grid layout. It is a very energetic and vibrant area of the city, with some amazing restaurants.

Passeig de Gràcia is a shopper’s heaven and has all the favourites, from high-end Chanel to Spanish-established Zara. The nightlife in Eixample is also great and there is something for everyone when it comes to a party! 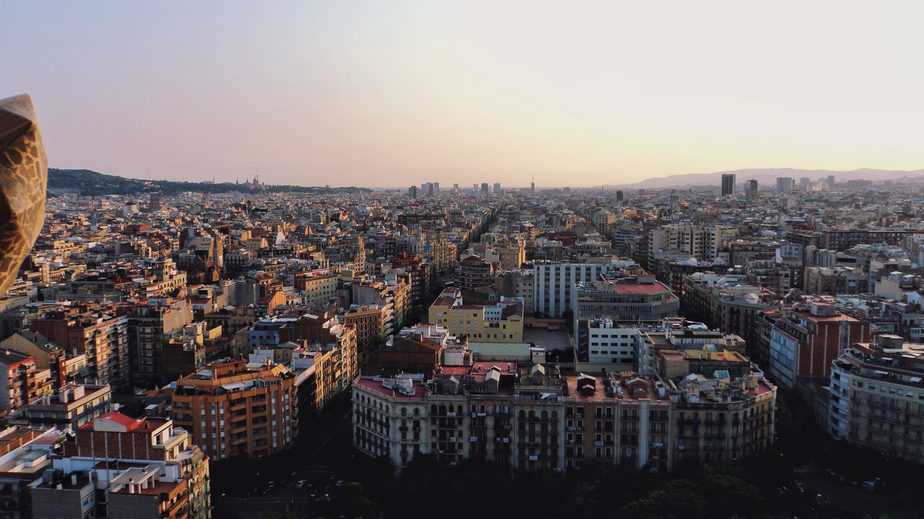 Eixample from above. Photo by Jorge Salvador on Unsplash.

I would recommend looking for a spot in the centre of Eixample, along the Passeig de Gràcia, to get the most out of this awesome district.

3. Bask in the greenery of gorgeous Gracia

Another spot for the Gaudí fans, but with less of that centre-of-town bustle, is Gracia. This district is just North of Eixample and is possibly my favourite district of Barcelona.

Gracia is most famously home to Park Güell, Gaudí’s most curvaceous and colourful creation. This iconic park is definitely worth a visit, no matter where you find yourself staying in Barcelona. There is something magical about the way in which the natural and built worlds coexist within the park that seems to have cast a calm spell over the whole district. 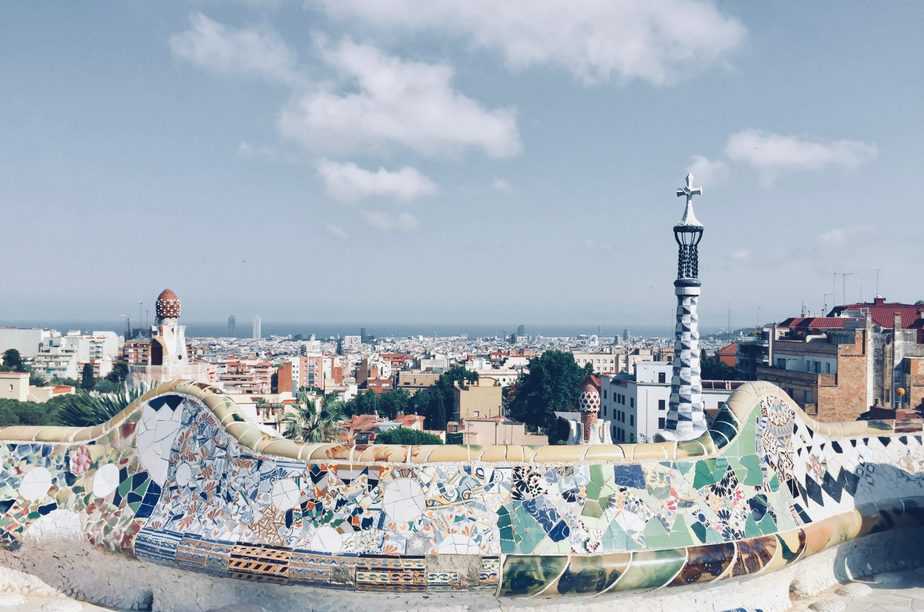 Gracia is a notably green area of Barcelona. Trees line almost every street and there are interesting garden beds dotted around all over. It is also home to some of the best cafés and coffee shops in the whole city. If you are a foodie looking for an authentic experience, this is the place to be. 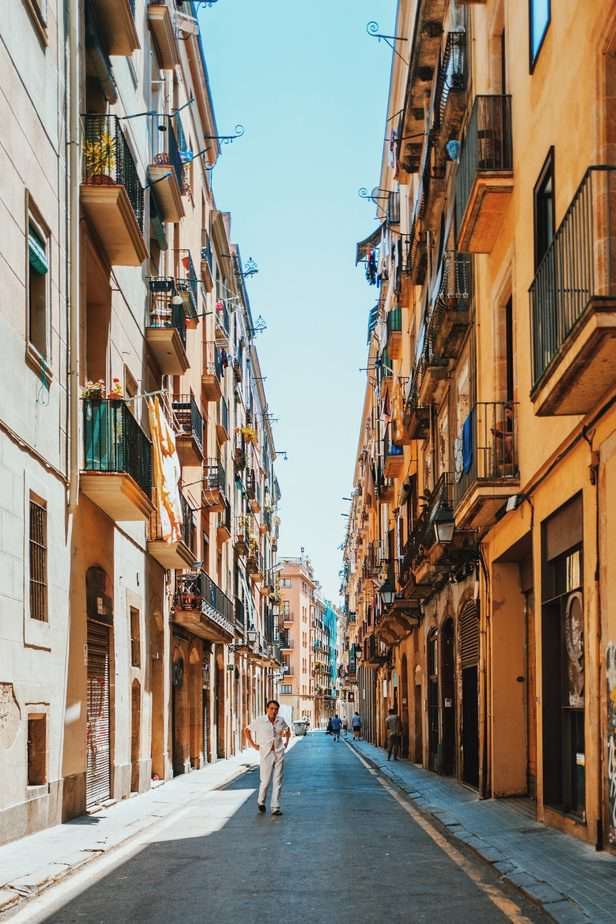 Not much can beat the authentic Barcelona experience. Photo by George Kedenburg III on Unsplash.

I would recommend an AirBnB in this area for sure. Vila de Gracia is the Southern part of the district, which borders on Eixample. Here there are tons of exquisite squares, surrounded by incredible cafés where you can eat and drink the summer nights away.

Bonus: See more of Spain in the small city of Badalona

Barcelona during peak season can be overwhelming. Tourists flood in from all over the world and every hour of the day sees people hurrying around trying to snap a selfie near a Gaudí. This last spot on my list is a little left of centre because of this.

Badalona is an awesome little city on the coast, just North East of Barcelona. It has its own strip of beach which is far less crowded and chaotic than the packed Barceloneta Beach found in the city. It is full of local people who do not speak very much English. While this can be tricky, it is hugely rewarding to learn to communicate and understand local people in their local language. 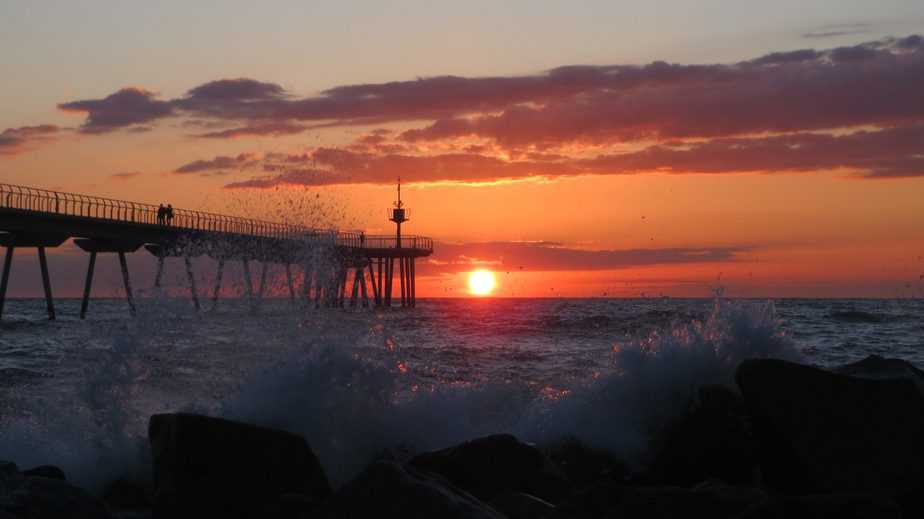 Sunrise in Badalona. Photo by Lluís Ferrer on Unsplash.

Coffee shop and grocery store owners will get to know your faces in Badalona, even if you are only there for a week or so, and it is always heart-warming to be greeted with a familiar smile and ‘Hola’. 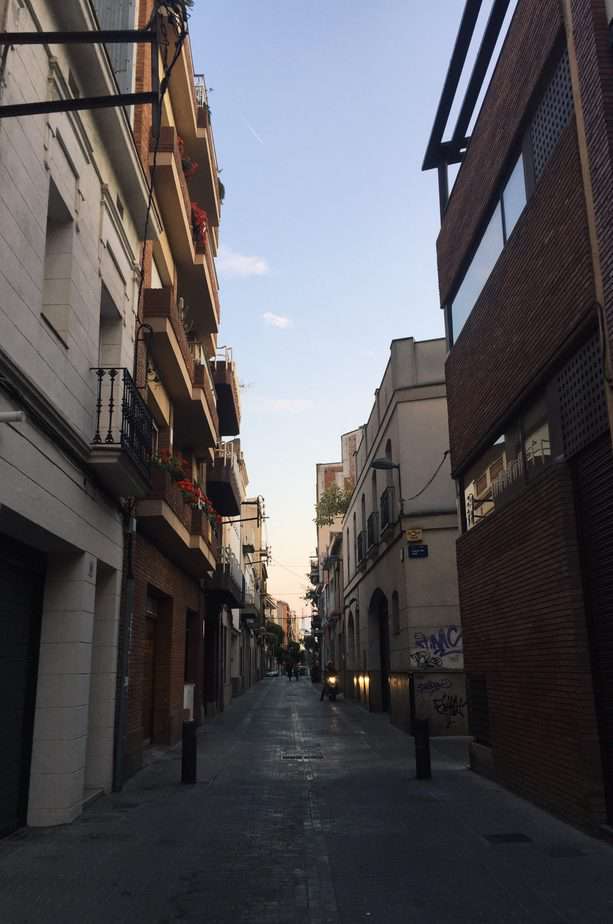 Experience the city while escaping the crowds in Badalona. Photo by Chelsea Pickering.

The best part of it all is that Badalona is included in zone one of the Barcelona public transport system. This means travel tickets valid in zone one, will get you back to Barcelona, at no extra cost.