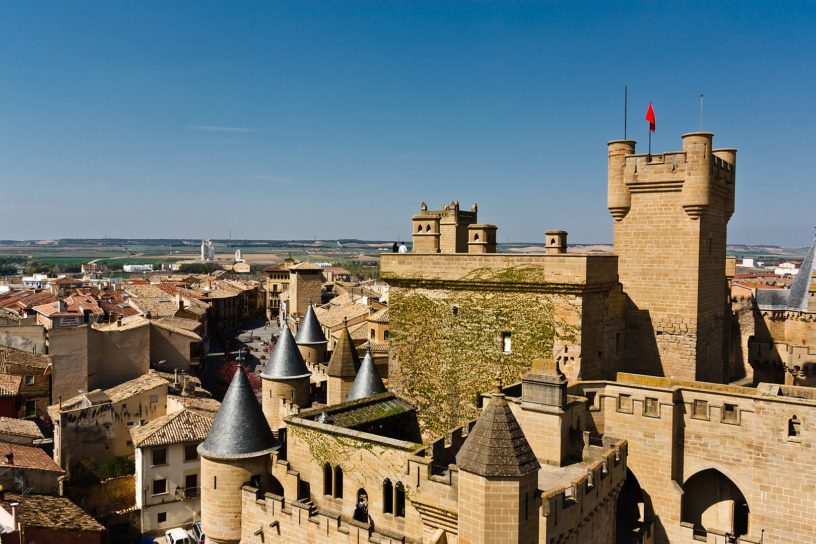 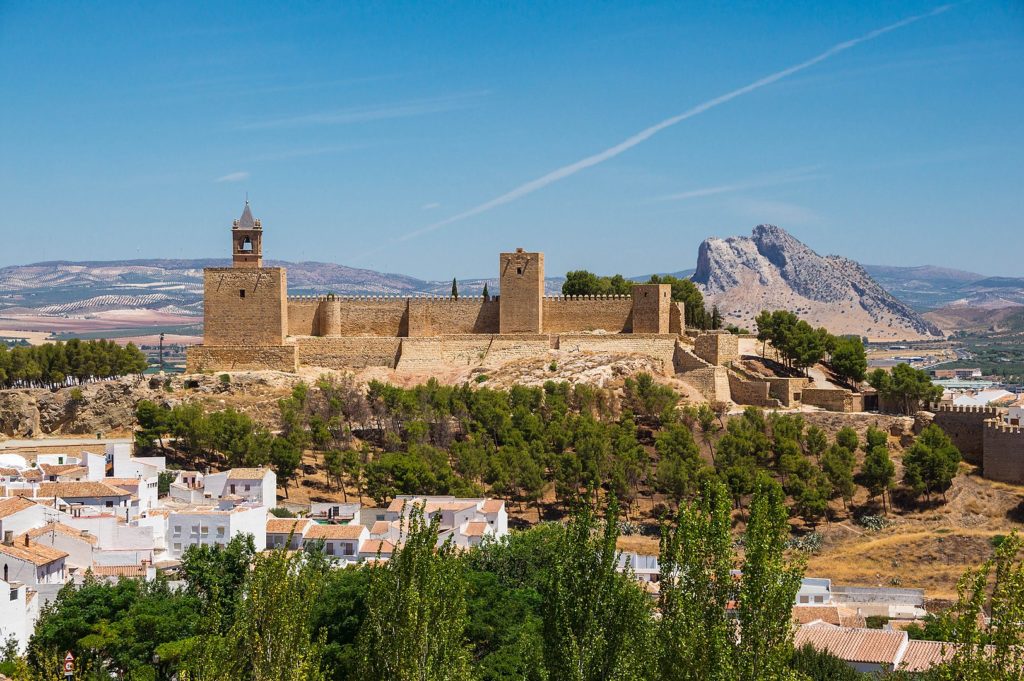 These awe-inspiring structures are characterized by their strong, fortified walls, often made of stone. They have remained standing for thousands of years and thanks to proper restoration, the castles look just as they did when royalties lived in them.

Fun fact about castles in Spain is that they were built by the Moorish.

While some of these castles were used as the official residence of kings and queens, some of them were summer and hunting lodges for the kings.

The larger the palace, the more prestigious it was regarded. Some of the castles were commissioned by kings while others by queens who needed the castle to their preferences. 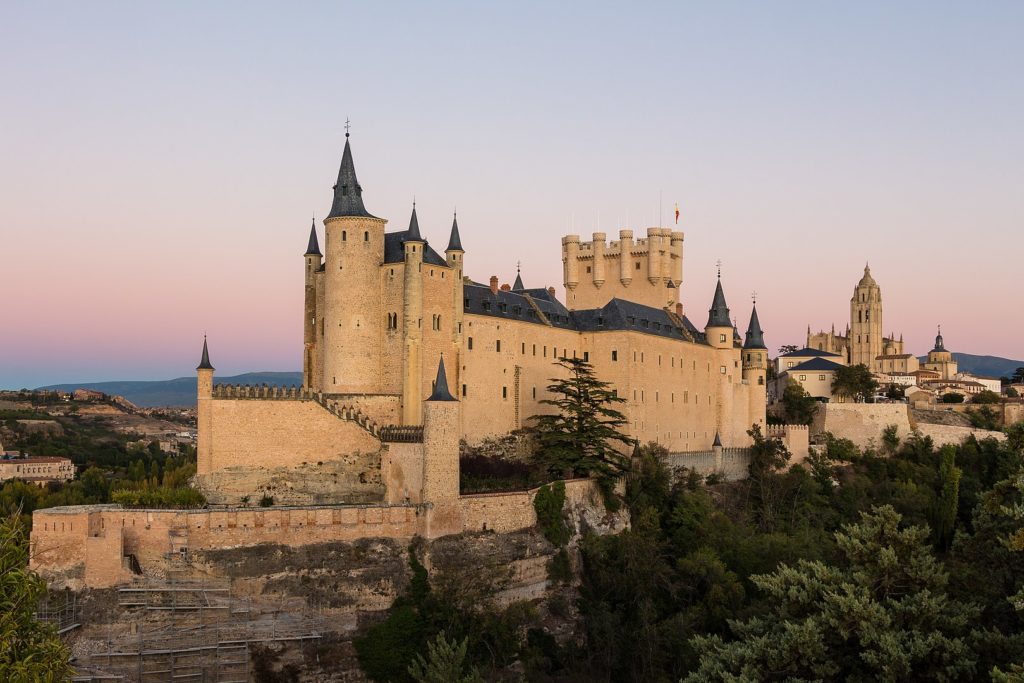 The exact date when the Alcázar of Segovia in Spain was built is not known. Its first written record of the castle was captured in 1120 AD.

This was the residence of King Alfonso III. It was modified and expanded over the years by succeeding rulers, including Isabela I who was crowned here in 1474.

Within the original fortress was a small city that was centred around an ancient church called the Cathedral of Santa Maria. It was later turned into a royal residence.

The castle is perched on the rocky slopes of a hill overlooking Segovia. This castle was built to serve as a fortress and royal residence.

It is widely known as the castle that inspired the design of Cinderella’s Castle at Walt Disney World.

Its architectural elements, like the tapering roofs and turreted towers, have become the model for the perfect fairy-tale castle. 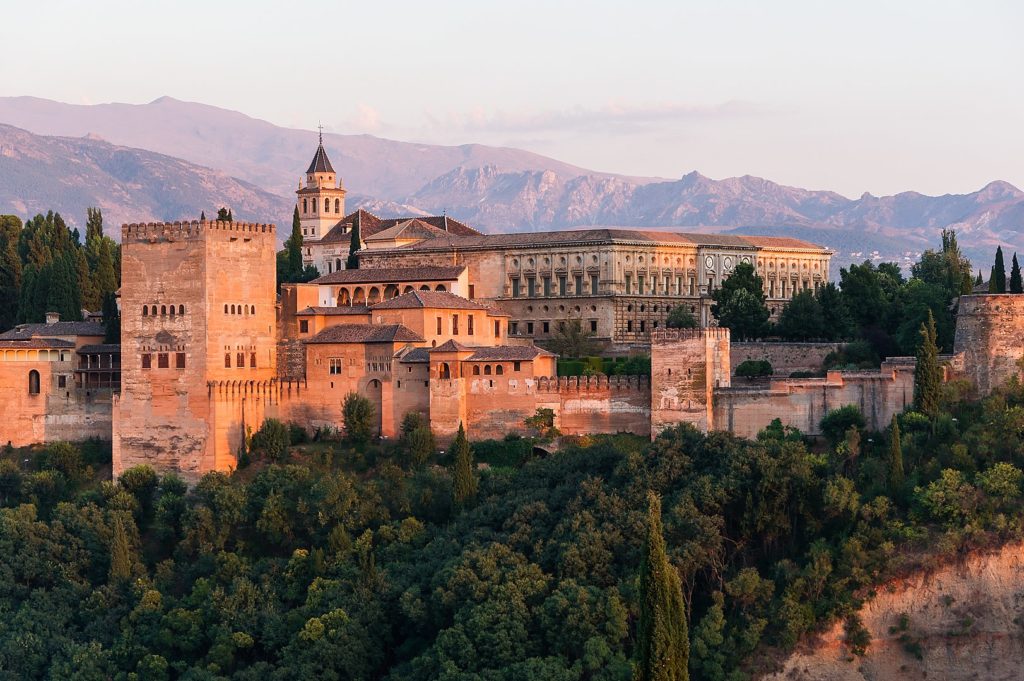 The massive Alhambra complex standing guard over Granada is the city’s crowning jewel. This was formerly the site of a Roman fortress and later a 9th century fortification.

Its history goes back to the 13th century when it was used by the Moorish Nasrid Sultans. After the fall of the Moorish empire, the castle was taken over by Ferdinand and Isabella in the late 15th century.

This palace has retained the extravagant decorative superfluities of Moorish styles. It is considered one of the best examples in the world.

As a reflection of the tradition of the Moorish, the castle features a courtyard as a central space. The courtyard featured reflective pools or a fountain.

Out of all the castles in Spain, this one captures the imagination of most visitors. The castle features a square Arab watchtower clinging to the rock underneath. On one side is the main square of Zuheros while on the other side is a sheer drop and stunning views across the rugged landscape.

Archaeologists believe that the original structure dates back to the 9th century and served as a guard gate between Córdoba and Granada.

The current castle date back to the 11th century when the region was ruled by the Zirid dynasty. Interestingly, the castle is somehow connected to a siege by St. Ferdinand III, King of Castile.

Credits to the design of the building goes to architect Hernán Ruiz I.

The Alcazaba of Antequera is another Moorish fortress in Antequera, Spain. It was built over Roman ruins in the 14th century to counter the Christian Advance from the north.

Unlike most castles, this one is rectangular in shape and has two towers. Its keep, Torre del homenaje, dates back to the15th century. It is considered to be amongst the largest of al-Andalus apart from the Comares Tower of the Alhambra.

The keep features a Catholic bell tower/chapel that was added in 1582. This is connected to the keep through a line of walls known as the Torre Blanca or white tower in English.

Alcazaba of Málaga, also known as Citadel of Málaga is the most well-preserved citadel in Spain. This enormous castle can be easily spotted from far away, as it sits on top of a hill overlooking the sea.

Highlights of the castle are its courtyard, the Torre Del Christ the Cuartos de Granada and to the side of the entrance is a Roman theatre that dates back to the 1st century.

This castle was formerly linked to the city ramparts which formed a third defensive wall but only two inner walls remain today.

The first wall was built around the landscape of the hill, completely enclosing the second inner area and is dotted with defensive towers. 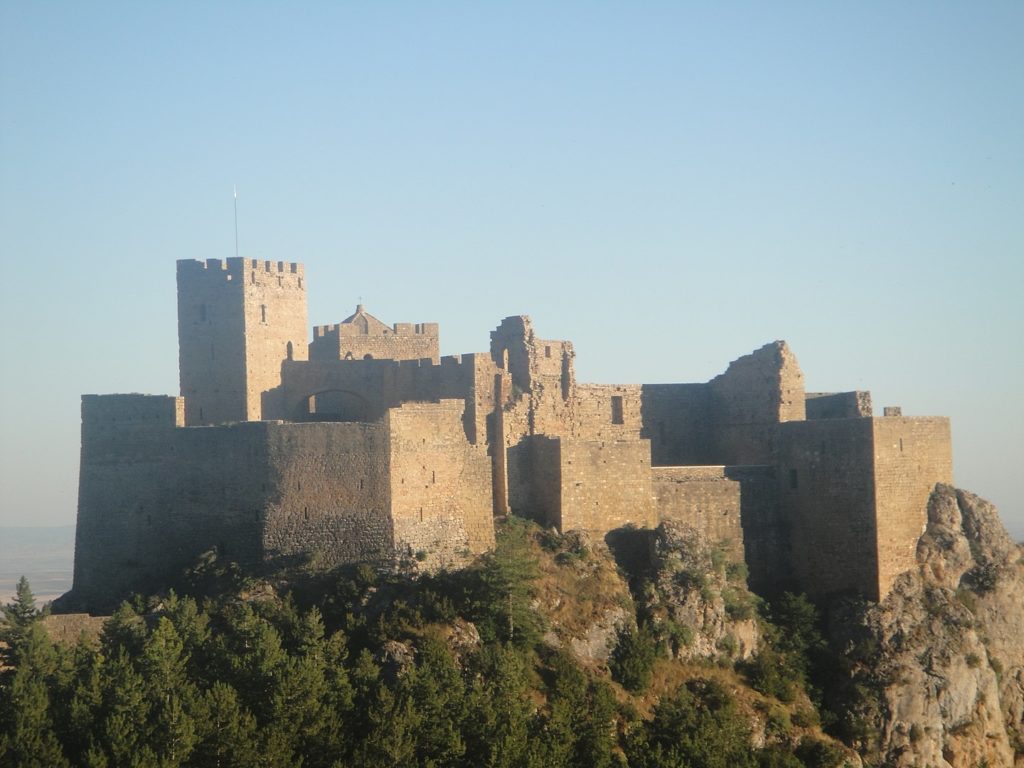 This next castle is located in north-eastern Spain about two hours from Pamplona. Loarre Castle is perched on a hill overlooking the Pyrenees mountain village of Ayerbe.

It was built in the late 11th century for King Sancho Ramírez I of Aragon. Later, the Romanesque Church of Santa María was added.

The castle stands out with its series of cylindrical towers that appear to lead up the hill to the castle proper.

There are remains of defensive posts that once stood guard along the partially ruined outer wall. These, together with the fortress’s main towers, have fortified parapets with rectangular merlon, suggestive of storybook medieval castles.

It was designed as both a military fortification and a royal residence making it well-protected by the limestone bedrock that forms its foundation, barring sneak attacks from an underground tunnel.

Located in Murcia Province, Lorca Castle was built to be a defensive fortress. This model worked well as it was never forcibly taken by invaders since its construction in medieval times.

The castle is on a site of a former Muslim citadel, and is a heritage centre, known as Fortress of the Sun. this was used for various cultural events.

Lorca Castle was first mentioned in the 9th century. It is believed that it was built during Muslim rule. Interestingly, archaeologist date the site to Neolithic habitation.

Built on a mountain ridge, running from east to west; this used to be a very strong fortress, divided into two baileys by a strong wall.

If planning to visit this castle, be prepared to walk as there are several attractions spread out and may be challenging to people with mobility problems. 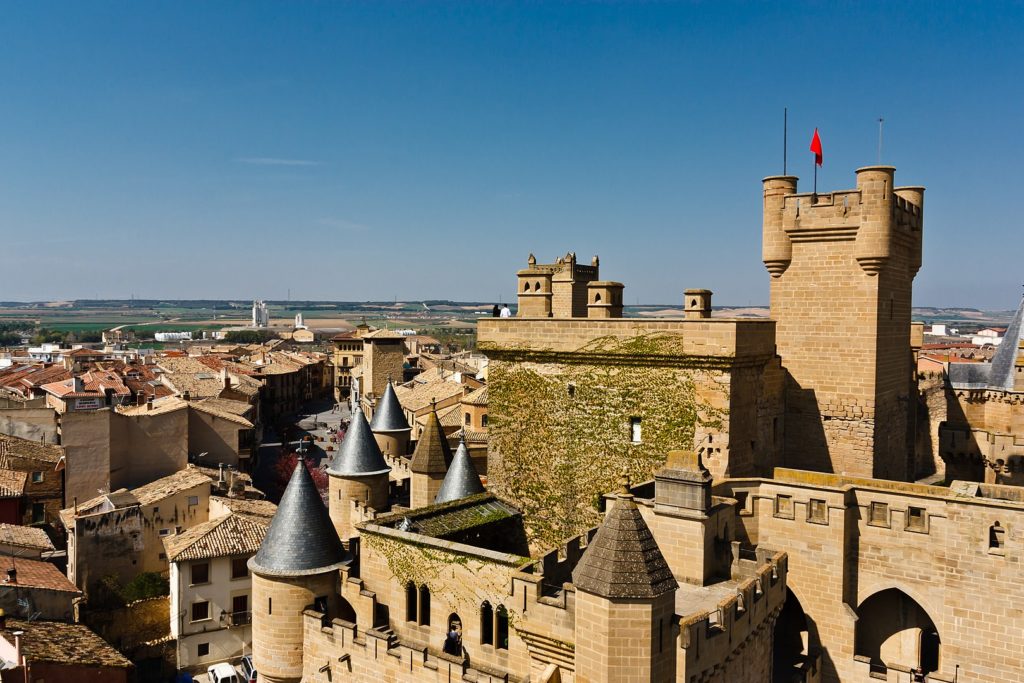 This next castle was built during the 12th and 13th centuries on the site of a former Roman fortress. The original section of the palace is known as the Palacio Vieja (Old Palace).

The Palacio Nueuvo (New Palace) was added in the 15th century. This castle is a great example of predominantly Gothic architecture.

Decorated lavishly, the castle was the home of Kings of Navarre. There are beautiful hanging gardens, separated closures for exotic animals and an interior arena that hosted jousting matches and bullfights.

The castle has been a National Monument since 1925.

Coca Castle a three sided structure built into a hillside the provided defence from invaders who would attack from the back.

Its architecture is also unique as it was influenced by the Moors although it was the Christians that built it in the 15th century.

Most of the castle’s interior was destroyed in the 20th century, but its exterior still retains Moorish touches, such as the turrets.

Coca Castle is a representation of undeniable luxury. Its tan walls stand out among their surroundings. 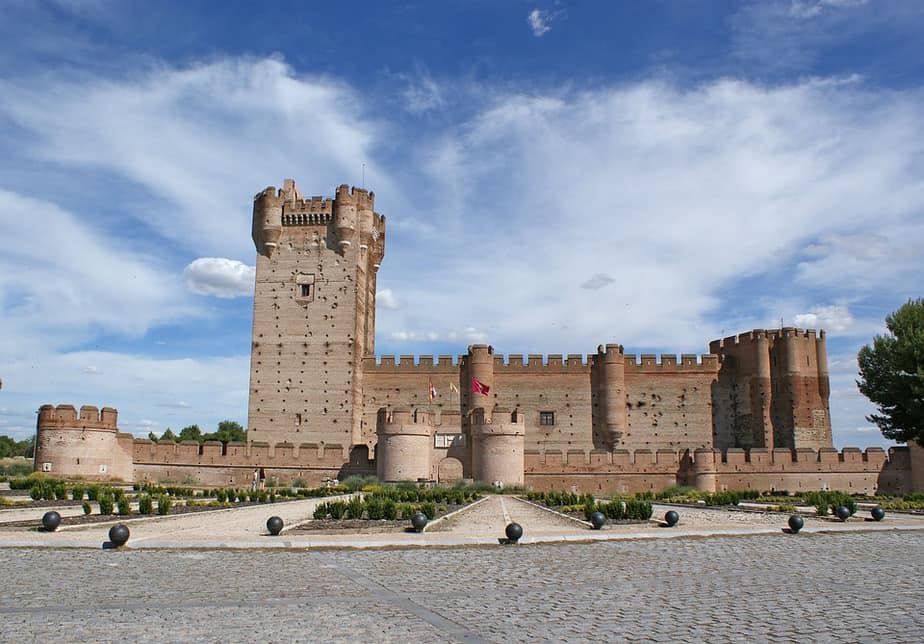 Lastly is Castle of La Mota that was reconstructed fortress with roots dating back to the 11th century. Over the centuries, the kings of Castile and Aragon fought over it. It was conquered by the Castilian since the 15th century.

The castle governed the surrounding area as it sits on a hill at Medina del Campo in Valladolid Province. To get to the castle, one had to cross a draw bridge

It has served as a prison where Hernando Pizarro, a conqueror of Peru, and Cesare Borgia were held. The castle can be visited in a day trip from Salamanca.