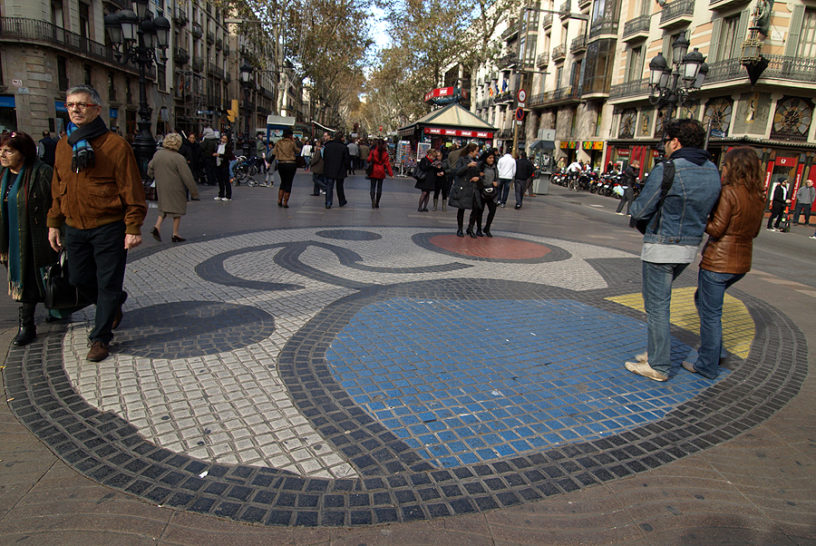 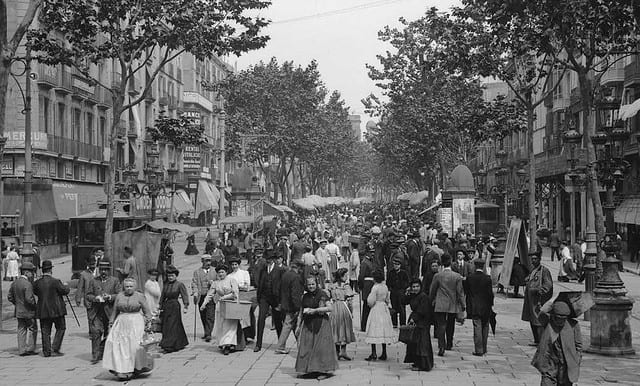 La Rambla is one of the popular landmarks of Barcelona that makes this metropolis exceptional. It stretches for about 1.3 km in the middle a pedestrian zone along Placa Catalunya.

This long street attracts both locals and tourists and is usually the meeting point.

There are several local vendors too selling street art, beautiful flowers alongside other historical buildings and monuments like that of Columbus.

Walking along this street, you will notice several sections that have their character. The street divides the Old Town into two, on one end is Barri Gothic while the other is Barri Raval.

As you look forward to basking in the charm of this street while in Barcelona, here are the top facts about it that you should know.

1. The word Rambla is Arabic

The name of La Rambla was borrowed from the Arabic word ramia meaning a sandy riverbed.

This was about water flowing from the Collserola mountains during heavy rains in the 10th and 11th centuries.

The water, through two streams, would run through the street to the sea. They were Via Laietana and La Rambla.

Construction of the city walls along the stream started in 1377. Later in 1440, the Romans diverted the stream to run outside the constructed wall.

Las Ramblas came to be the first avenue in Barcelona after a hospital was constructed close to it.

Soon after, more developments along La Rambla were established such religious buildings and they became the centre of Barcelona city life.

2. The street is lined with trees and is always crowded 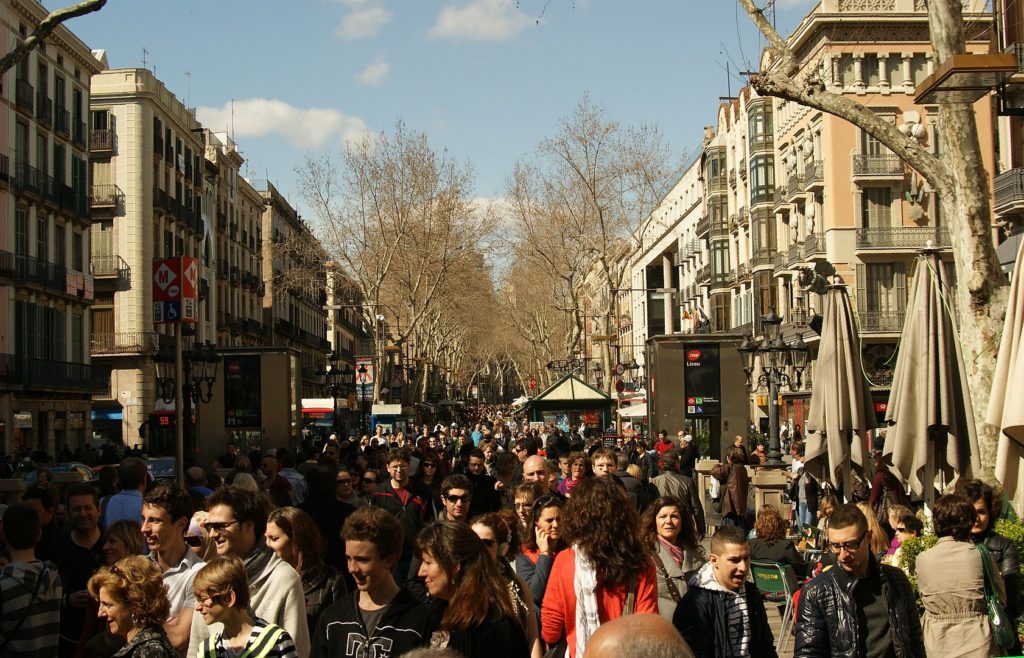 One beautiful thing about La Rambla is that it is well shaded with trees. The paving design of the street construction imitates ripples of water.

There are several vendors along the street selling different wares. You will find souvenirs, street artists, flower vendors, cafés and quaint bars.

One of the touristy landmarks on this street is the La Boqueria market where you can find a wide range of items.

There are historic buildings along the streets too such as the Palace of the Virreina and the Liceu Theatre, where operas and ballets are held.

3. Barcelona FC fans love to celebrate on this street

If you are a football/soccer fan, then this team needs no introduction. They are famously known as the Catalan Titans whose playing style is envied by many.

Barcelona F.C fans are known as the cules, and so whenever their team wins a match, they would meet at La Ramblas to celebrate.

They would meet in front of the fountain, their headquarters, and celebrations would commence.

4. The street is made up of five others

In case you did not know, La Rambla is not one street but five.

The street starts at Placa Catalunya and ends at the Columbus statue at the waterfront.

This entire street stretches for about 2 kilometres and is referred to as La Ramblas.

Being a popular street, thousands of people walk up and down the street during the day and night.

The pedestrian traffic attracts street performers, tapas restaurants and several other things. It is also the most photographed street in Barcelona.

5. La Rambla is a true representation of Spain’s culture

There are several historical and cultural attractions along La Ramblas that reflect the Spanish culture.

One of the cultural attractions is the Grand Theatre of Liceu that is Barcelona that was opened in 1847. It is the oldest in the city and was founded in 1568.

Another cultural attraction on this street is the Centre d’Art Santa Mònica.

This is a public museum of contemporary art that holds regular exhibitions of international artists.

The museum is housed in the baroque Palau de la Virreina. This street is also home to the most famous restaurants and night clubs in the city.

There is a lift on the tall column supporting the statue of Christopher Columbus. It has a lift that takes people up for panoramic views of the city.

6. It is the most pedestrianized street in Barcelona

Most people living in Barcelona prefer walking than traverse the city in a vehicle because of traffic.

This, therefore, led the government to designate pedestrian walkways. No vehicles are allowed on this street.

There is a total of 130 hectares of land used for pedestrian lanes. It is no wonder then that you will find most people on this centralized street.

7. La Rambla used to be a meeting place for artists 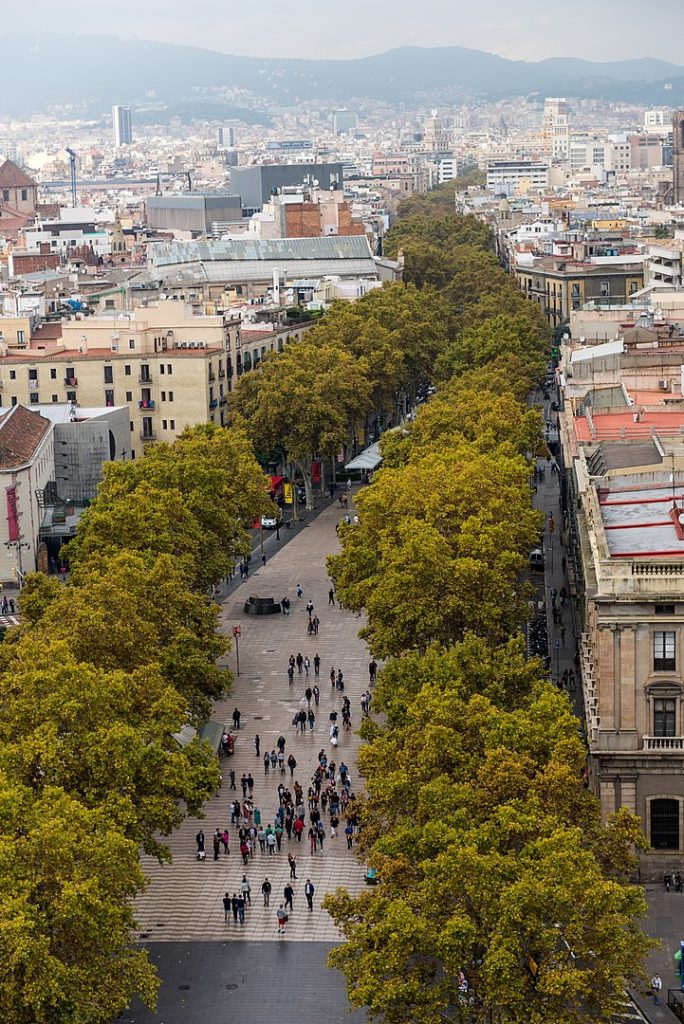 When designing this street, art was the centre of the project. Therefore, it was the central meeting place for artists, writers, and intellectuals between the 19th and 20th century.

A popular meeting point for the artists was Café de l Opera where they held political and cultural debates.

You will also find painters, human statues and sculptures on this street that represents the culture and vibe o the city.

8. La Rambla is home to the only finished project by Antoni Gaudi

Antoni Gaudi has been involved in several artistic projects in Spain. He designed and built Park Guell, Casa Mila, Sagrada Familia among many others.

He faced lots of challenges and criticism in his previous projects and abandoned them along the way.

One successful project that he was involved in was the designing and construction of La Ramblas.

9. It is a popular market place 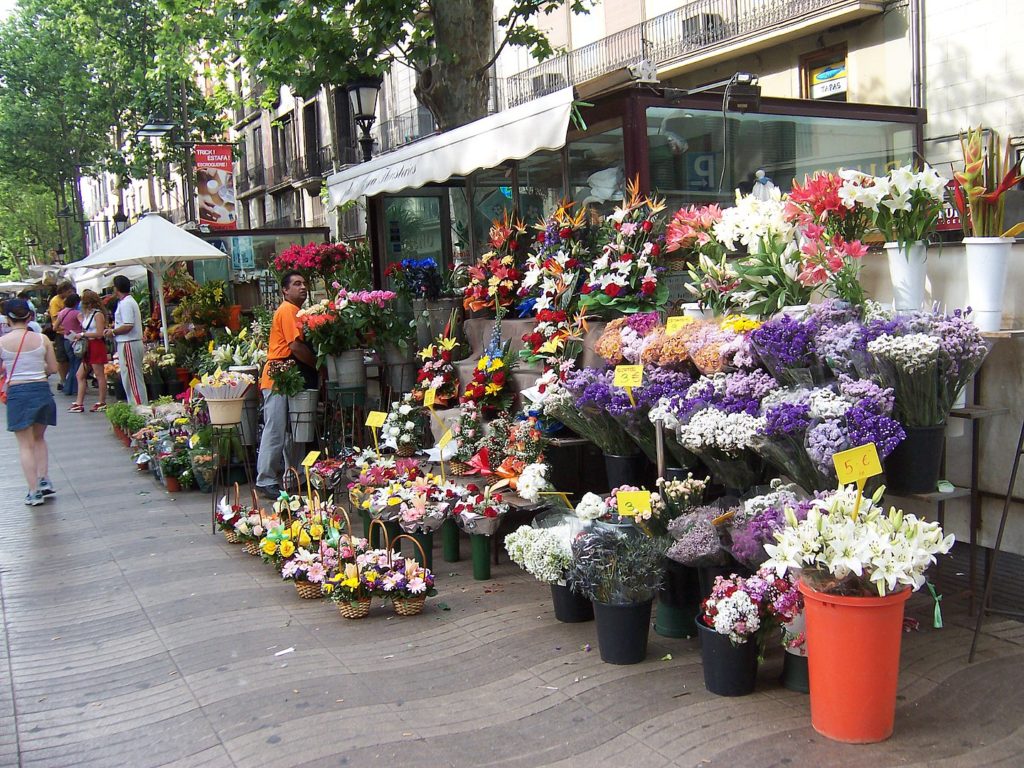 The street is painted with vibrant art pieces, flowers, souvenirs and cafes. Back in the 15th and 16th centuries, this street was a large popular market.

There used to be seasonal products, animals and birds too. The sale of caged birds and small pets was however banned in 2010.

10. Joan Miro signed on a huge mosaic on La Rambla 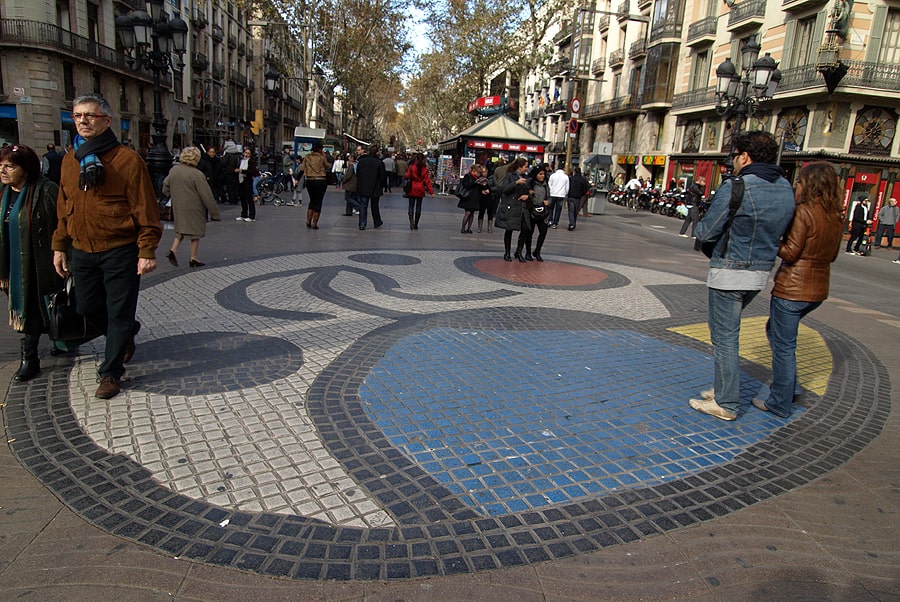 As you walk along this street, there is one feature on the walkway that you cannot miss, the massive coloured mosaic.

This was built and designed by the famous surrealist artist Joan Miro. The purpose of the mosaic was to welcome visitors to La Rambla.

The mosaic was made using terrazzo tiles and dyed crushed glass. If you look closely, you will find Miro’s signature on one of the tiles.