The Best Beach Resorts in Barcelona 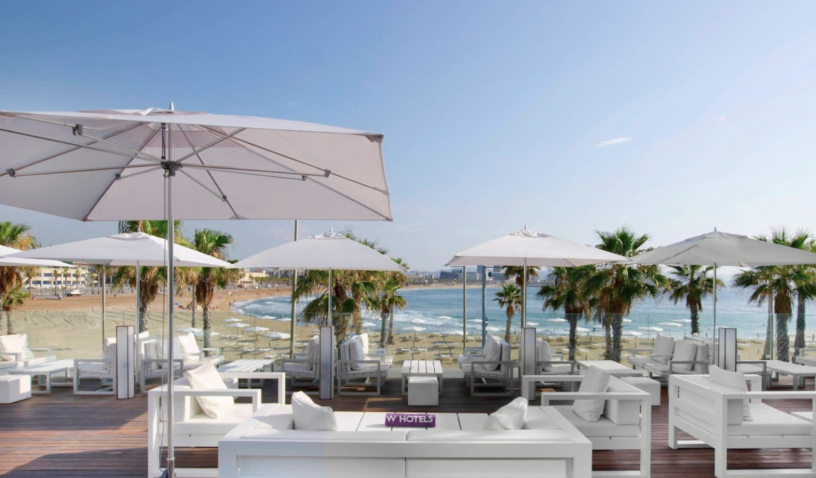 The Best Beach Resorts in Barcelona

Barcelona is a beach city through and through, even if the beach itself was a man made construction back in 1992. The city doesn’t necessarily have “beach resorts” the way we understand them in the east (Club Med, etc), but there are a handful of suitable beach residencies in the form of lavish hotels that can give that resort-life feel. 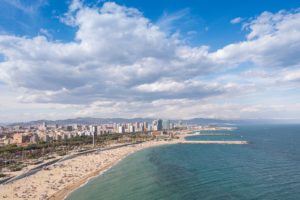 Here’s where to stay in Barcelona if al-day beach access is something that is important to you during travels.

The W Hotel in Barcelona

It doesn’t get much better than the W if you’re in the mood to see the ocean day in, and day out. The hotel sits at the southernmost tip of Barceloneta Beach, where the sand stops and the pier juts out into panoramic oceanic views.

The hotel itself was designed to give guests the illusion that they were sailing at sea, and not actually staying on solid land. It shares an uncanny resemblance to the famous Burj al Arab hotel in Dubai, which is also shaped like a sail and perched at the water’s edge. 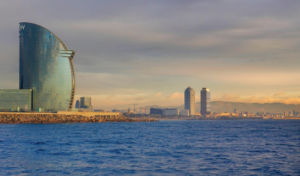 5 of the Best Modern Buildings in Barcelona

The uninterrupted views over the Med are why people stay here, as is the somewhat secluded and exclusive nature of the W’s location. Locals have nicknamed this resort the Hotel Vela, which literally means the Sail Hotel.

The W boasts a private beach and outdoor pool area, both available to guests at all times.

A roundup of Barcelona’s best beach resorts would be totally remiss to skip this iconic hotel. The Hotel Arts Barcelona is widely known as the place to stay if you’re coming for a beach holiday in this Spanish melting pot.

While the W sits at the bottom of the pier in seclusion, the Hotel Arts is a little more social, and finds its home at the northernmost point of the pier, where the beach itself comes to an end. 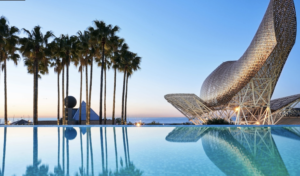 Hotel Arts in Barcelona – by Hotel Arts – Uploaded by them

The building is a skyscraper, and is one of the two tallest buildings in all of Barcelona (the other tallest is just across the street). Made out of blue glass, the hotel is an integer part of the Marina, and has direct access to Somorrostro Beach.

Naturally, the views over the Med are equally as impressive, and the resort boasts amenities that are state of the art. Their two pools, rooftop spa and Michelin Star restaurants are here to be enjoyed!

The Eurostar’s Grand Marina Hotel is situated right next to famous World Trade Center, also right on the water’s edge. It’s not a beach-accessible hotel per say, but one is within walking distance of the main sand areas, and you’ll still enjoy the Mediterranean panoramic throughout your stay.

This is a chic and contemporary hotel with some fantastic amenities for guests to enjoy. I particularly love their piano bar and the multiple landscaped terraces that guests can use to get a sense of the great outdoors, without having to return to street level. 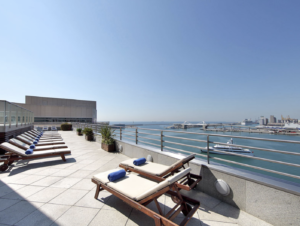 10 Things to Do on the Beach in Barcelona

I should mention this is a 5-star resort, and despite being more affordable than most luxury hotels in this area, they have not cut corners when it comes to attention to detail. I particularly love that one is a mere 5 minute walk to la Rambla from the hotel entrance — endless entertainment, with the beach right at your fingertips.

Situated right next to the Hotel Arts, the Pullman is another 5-star dream resort right next to where the water meets the shore. With its swanky interior and sea views, one need only take a short stroll to band up right on the promenade and surrounded by the best beach bars and eateries that this side of Barcelona has to offer.

If venturing street level is not for you, then make your way to the hotel’s rooftop terrace where you’ll find one of two of the resorts swimming pools, or to the rooftop bar with the guest hot tub. World class tapas selections are severed throughout the day, throughout the hotel. There’s really no reason to leave the resort, come to think of it! 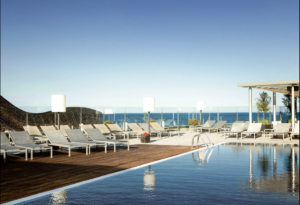 That said, if you are going to stay here, one may as well make the equally as short stroll to the Picasso Museum which is situated nearby.