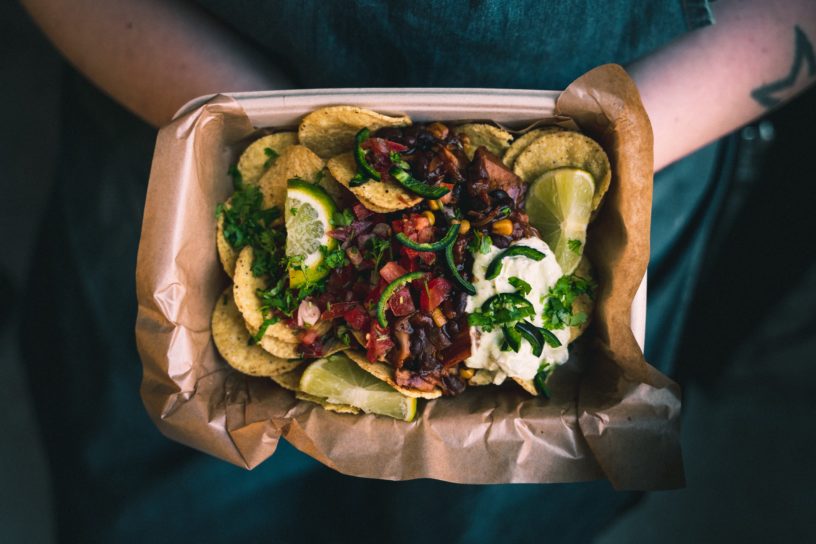 Street food is a meal quantified by its ability to be eaten almost immediately from wherever you are. Whether this is on a street, or seated in a “street food” restaurant is irrelevant. The point is that the meal should be quick, tasty and convenient.

In Barcelona, this food trend has completely taken off. There are an array of global cuisines available in street food style, particularly in the newly gentrified areas of the city center. Read on to find out where…

Chivuo’s has completely changed the street food scene in Barcelona. They now have a handful of different branches across the city, and are the go-to for local Catalans who want someone delicious on the go.

Chivuo’s is a street food grill, with a simple menu of a few burgers, hotdogs, nacho chips and patatas bravas. All served hot and fast, & optionally with an on tap beer of your choice! 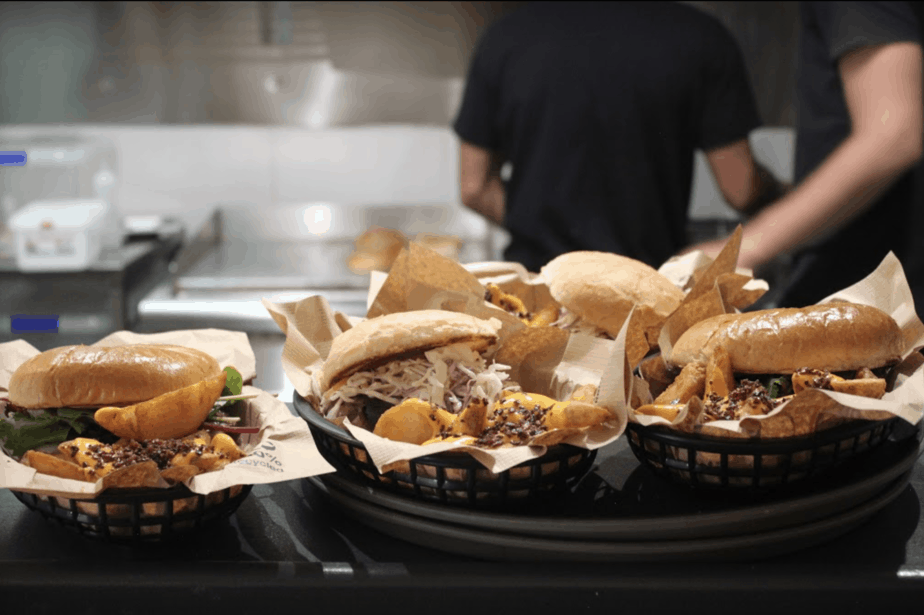 Their bar snack menu is not to be overlooked, either. They do spring rolls, mozzarella balls and deep fried meat of some sort that I have yet to sample! You won’t find a more vibrant spot for a craft beer on a Friday night in the city.

Opening Hours: Monday to Sunday — 1pm to 12am

Kriminal is an easygoing street food join in Poble Sec, down the southern end of the city center. This is one of those newly gentrified parts of Barcelona where dining options just like this one are becoming more and more popular.

Kriminal is a Mexican inspired street food restaurant, with a few dishes exempt from this cuisine (like the burger). 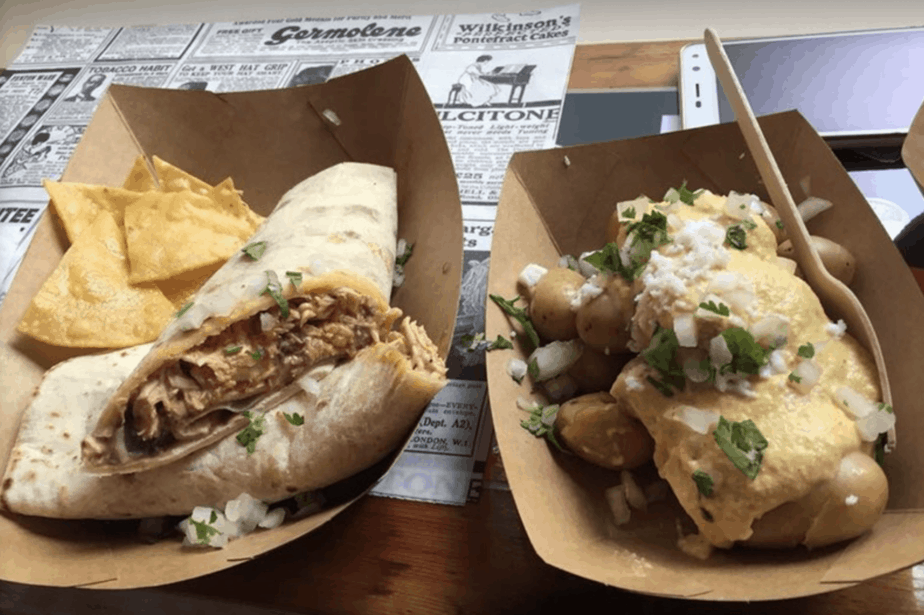 The menu is quite simple: a variety of snacks, quesadillas, burritos and salsas.

Everything is served on disposable plating, making it suitable for eating in or eating while you walk the streets. Poble Sec is a popular nightlife spot in Barcelona so a lot of bar-goers come in search of food between their drinking spots!

Opening Hours: Monday to Sunday — 6pm to 1am

Vegans deserve street food too, and Barcelona is one of the few cities in Europe that actually gets it!

About ten paces from the Sagrada Familia you’ll find this little vegan haven. It’s street food delux, and everything is cruelty free, with no animals being harmed in the making of their juicy hotdogs, nachos, chicken wings and burgers. 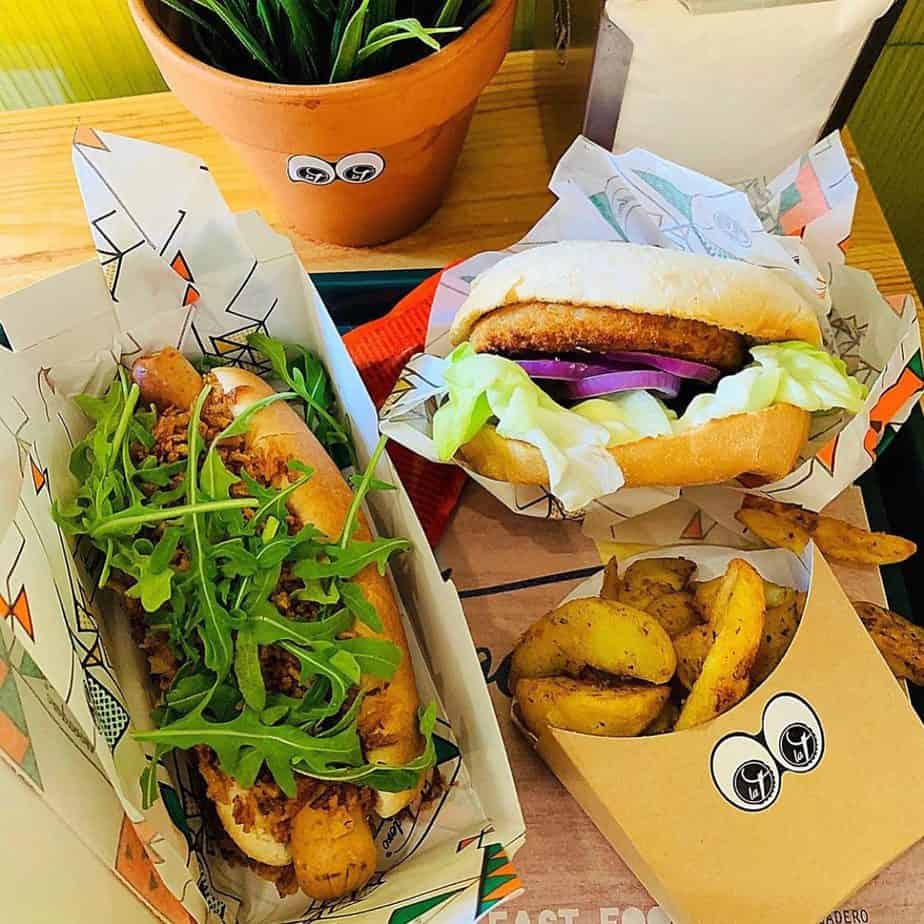 Complete your main meal with a side of fries, onion rings or coleslaw. Perhaps even a donut for dessert.

La Trocadero keeps things relatively inexpensive considering the quality of the plant-based meats used in the making of the meals.

Veganism aside, this is one of the best street food spots in Barcelona hands down.

Toma Ya Street Food in Barcelona

Toma Ya hasn’t stuck to any conventional cuisine laws when curating their street food menu. They’ve taken the best of the best street food dishes from around the world and brought them into one little eatery right here in Gracia, Barcelona.

At Toma Ya you’ll have the option of eating an array of Asian style noodles, authentic Mexican tacos, potatoes in many different forms, some interesting burger options, gnocchi, a curry of sorts, meatballs… I could go on. 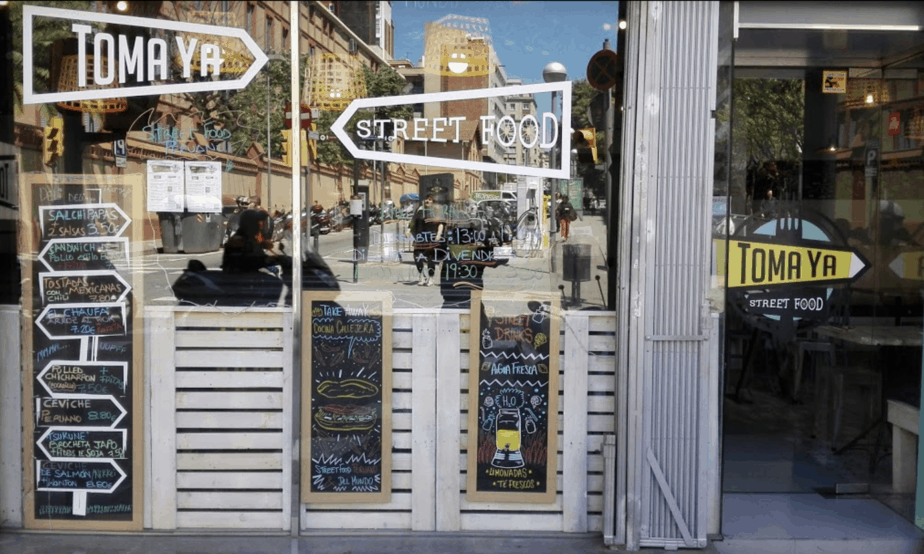 In terms of variety, it doesn’t get much better than this. Toma Ya also has ample options for vegans and vegetarians. Come hungry and come with friends!

Bo de B in Barcelona

Bo de B is the most tucked away, unassuming street food bar you’ll find in the city center. It looks like a hippie hideaway; as if you’d walk in to find a care circle taking place on the floor.

This is, in fact, good old Spanish street food. Sandwiches, wraps and salad bowls are the order of the day, and you’ll actually have to eat these all on the street as there is little to no space inside.

Bo de B is just inland from Barceloneta beach, so this is where you should grab a bite when too much time in the sun begins to take its toll.

Machete is just a very short walk from Bo de B, also in close proximity to Barceloneta. 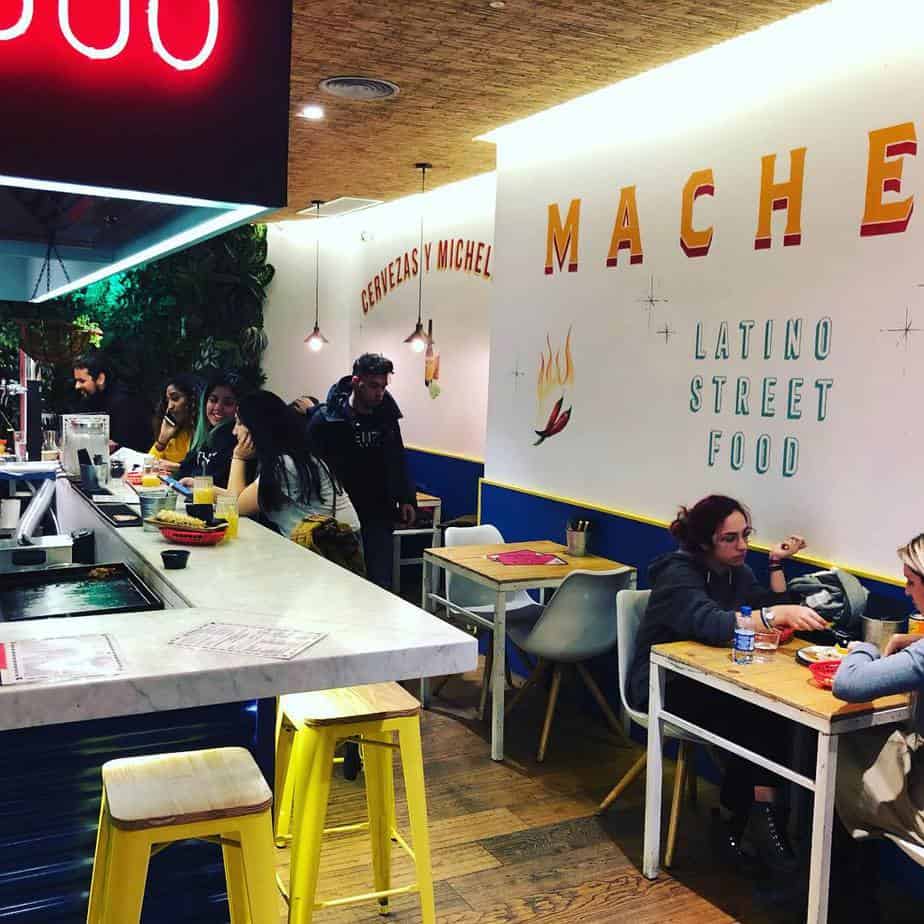 Machete is very good at creating a vibe; they play old school hip hop throughout the space daily, with service continuing through until 2am. The laid back nature makes it welcoming to those coming straight off the beach, with no specific attire necessary (though shoes are preferred).

Machete does taco Tuesday! Come for €1 tacos all day.

Opening Hours: Monday to Sunday — 1pm to 2am

Street food will come in handy more often than you think once you arrive in the Catalan capital. You’re going to spend a lot of time exploring on foot, be it self-guided or with one fo the free guided walking tours.