Best Neighborhoods for Airbnb in Barcelona 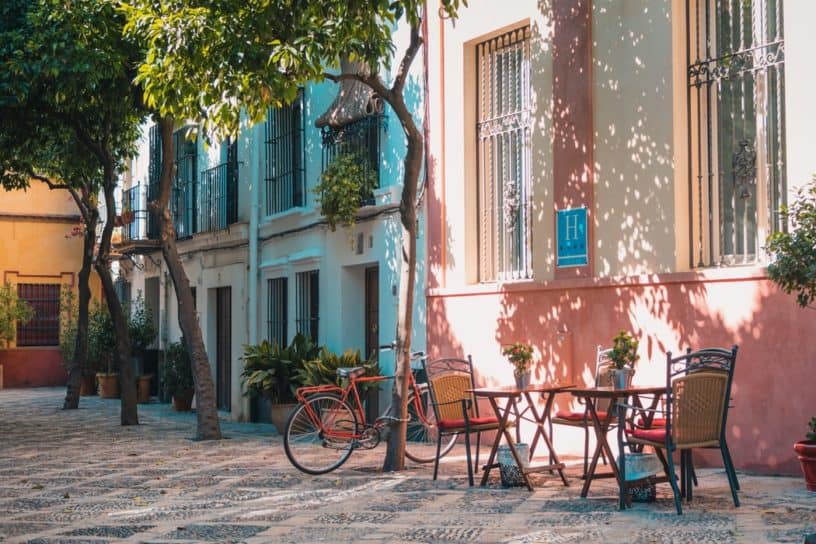 Best Neighborhoods for Airbnb in Barcelona

A first timers Barcelona: what to see, things to eat and where to stay.

Moving between districts in Barcelona is like a lucky packet of culture, architecture and cuisines from around the world. Barcelona is also quite a party oriented city, so certain neighborhoods are better for night owls and would usually be avoided when looking for places to stay with families. 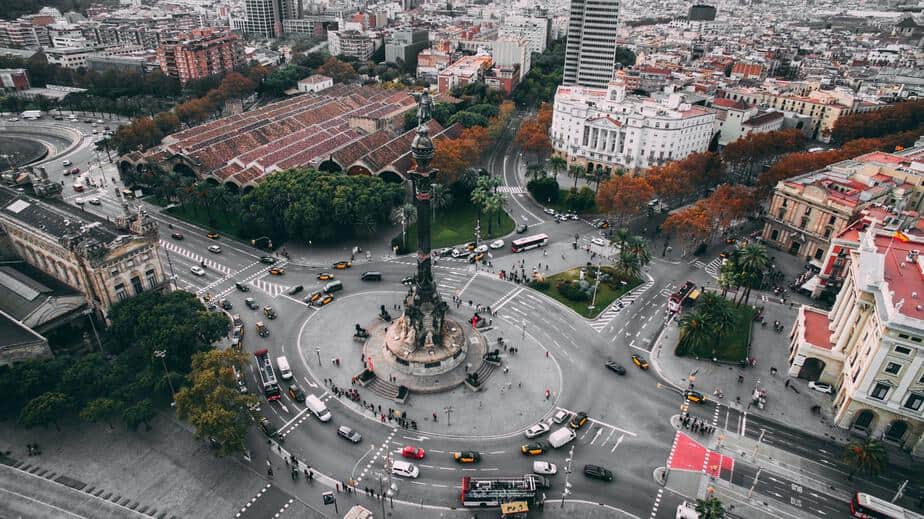 The following are a few of the best neighborhoods in Barcelona for Airbnb rentals, each for different reasons. Read on and you should easily identify the area that resonates with you most.

The Gothic Quarter in Barcelona

The Gothic Quarter is part of Barcelona’s old town; travelers come throughout the week to take free guided walking tours through these historic streets.

The neighborhood is home to some of the most iconic gothic structures in the country including the Catedral de Barcelona to the Basílica de Santa Maria del Pi. More than this, it is also the old Roman settlement district which means there are Roman ruins in the mix as well. 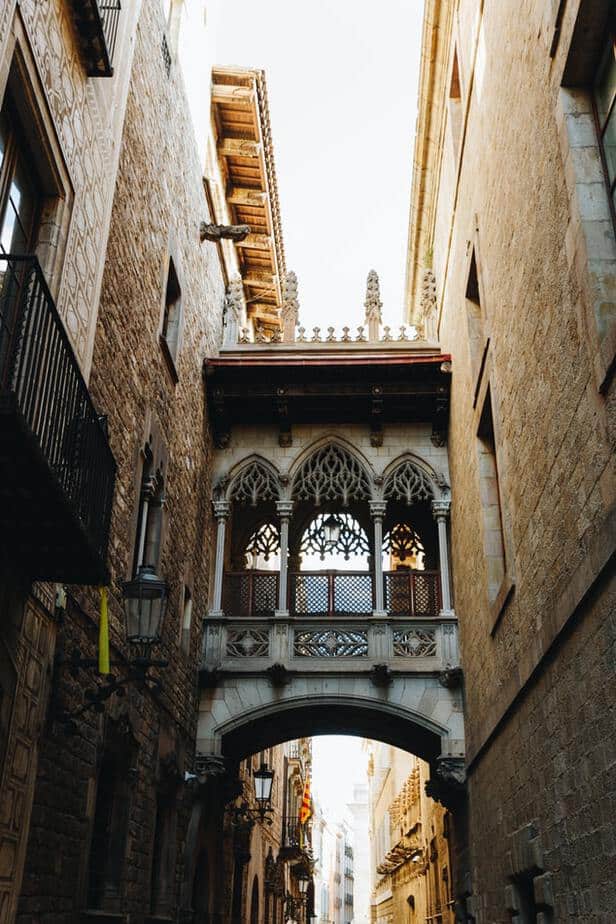 The tree lined streets and collapsing architecture hold together a culture of entertainment in these parts. This isn’t a neighborhood of wild nightlife, but the people in the Gothic do value good restaurants and street cafes in which to enjoy a glass of wine or two. There is great shopping, many churches and quaint coffee shops.

Airbnbs in the Gothic Quarter are considered to be central and tranquil, so prices don’t run cheap. Keep in mind you are also close to the beach if you stay here, which is a perk in itself. 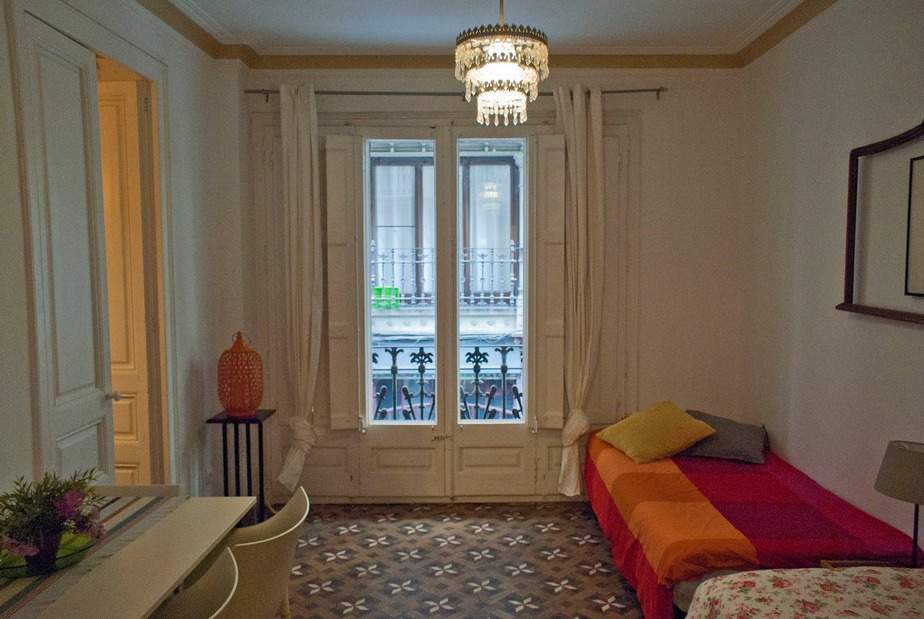 Airbnb in the Gothic Quarter – by Airbnb – Sourced from their website

If you want to feel at home in Barcelona you’d probably love staying in the immigrant community known as the Raval. It’s a hub for people from cultures from around the world and the diversity extends through to the bars, restaurants and retail stores that el Raval offers. 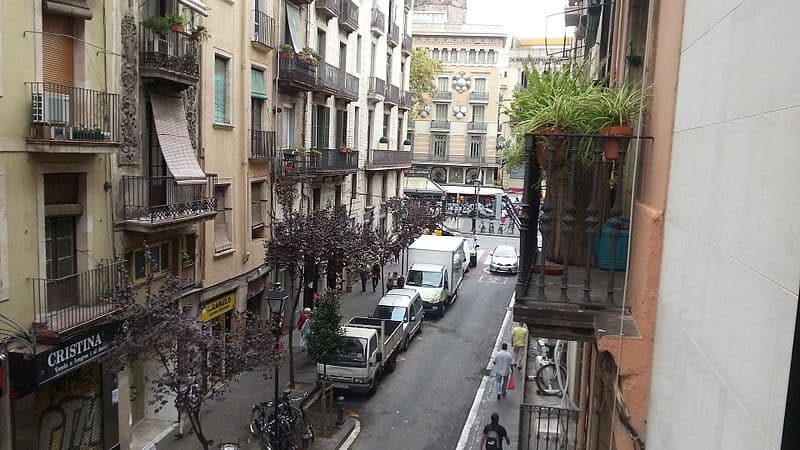 This is also where the Barcelona Museum of Contemporary Art is found. There is an undeniable artistic flair in this village and university students like to flock here on a Friday afternoon for a drink before the proper party begins nearby in el Born.

Expat communities in Europe are known to be slightly more affordable than the local spots. Drinking, dining and even renting an Airbnb is noticeably cheaper in el Raval compared to the rest of Barcelona. 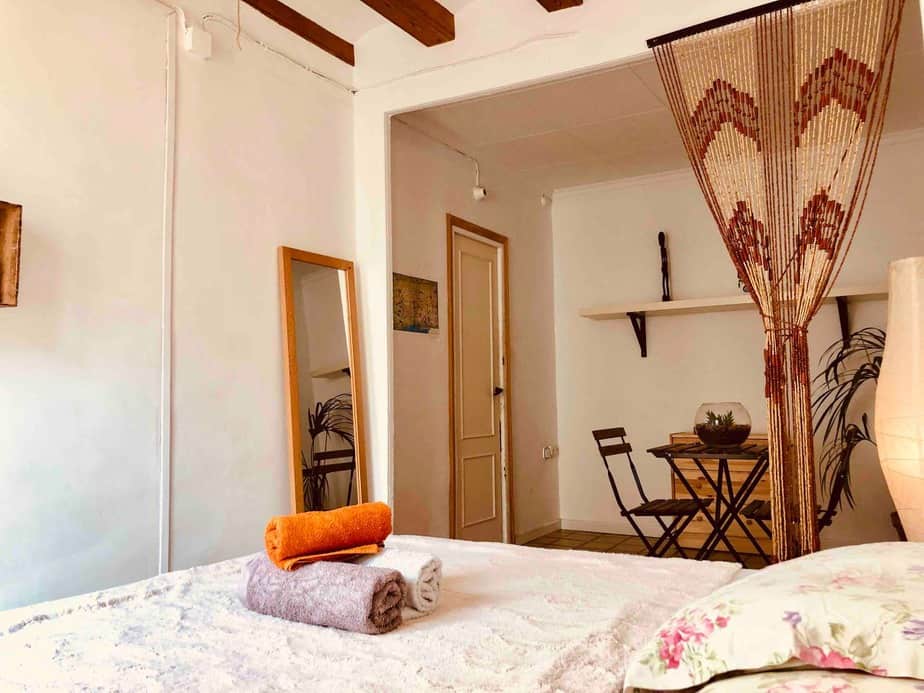 Airbnb in el Raval – by Airbnb – Sourced from their website

Barcelona began to rapidly expand in the 1860s, and the medieval city was pushed north until it developed a separate and new city hub that is now known as Gracia. Some people view this neighborhood as Barcelona’s second city center; it’s easy to see it this way considering it’s much bigger than the other Barcelona districts and it holds just about everything one can find in the center itself. 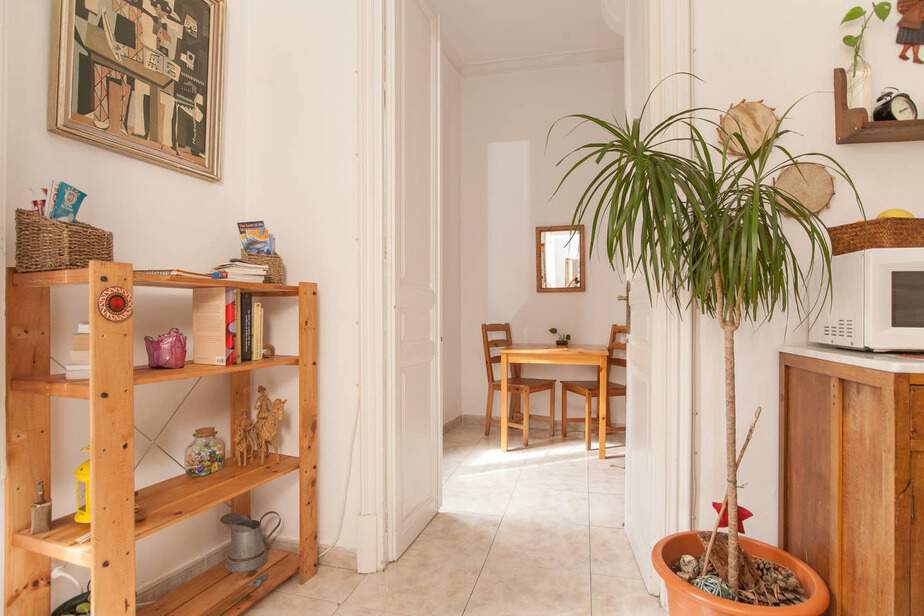 Airbnb in Gracia – by Airbnb – Sourced from their website

Gracia is best explored over a full day, preferably through a guided walking tour. You’ll move through these newer streets and past boutiques, quirky cafes, artistic coffee shops and co-op spaces & plazas.

Thanks to its size, Gracia has many Airbnb options available throughout the year. This is usually the last neighborhood to sell out in the summer; not because of poor quality, simply because it is slightly further from the ocean.

El Born is for those night owls I addressed earlier in this piece. This is a neighborhood of high energy, fabulous cafes, budget bars, great tapas and something to do no matter what time it is.

Because there are so many bars in el Born, they tend to identify themselves based on an alcoholic specialty: gin bars, wine bars, cocktail bars, whisky bars ect. 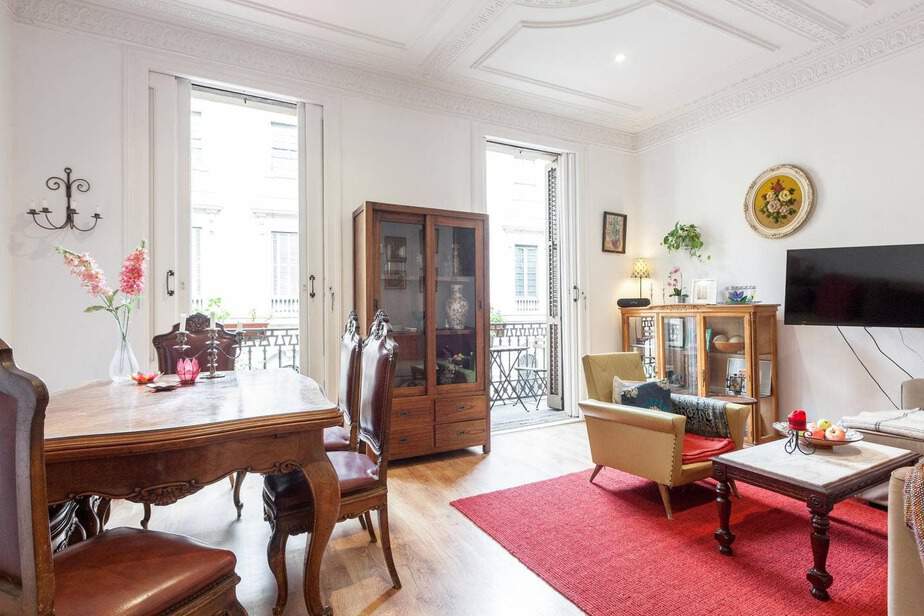 Airbnb in el Born – by Airbnb – Sourced from their website

There is live music to be found in el Born, as well as nightclubs where you can dance to the hits of the 80s and Spanish classics with the locals.

El Born clings to the bohemian spirit of Europe. The architecture is medieval Spain, a must see in the light of day and in the dead of night. Don’t Airbnb here unless you are open to constant street activity.

Up until very recently, Poble Sec was simply the forgotten district underneath el Raval and the Gothic Quarter. It is the most recent area in Barcelona to be gentrified, and is considered “up and coming” in terms of attractions and entertainment. 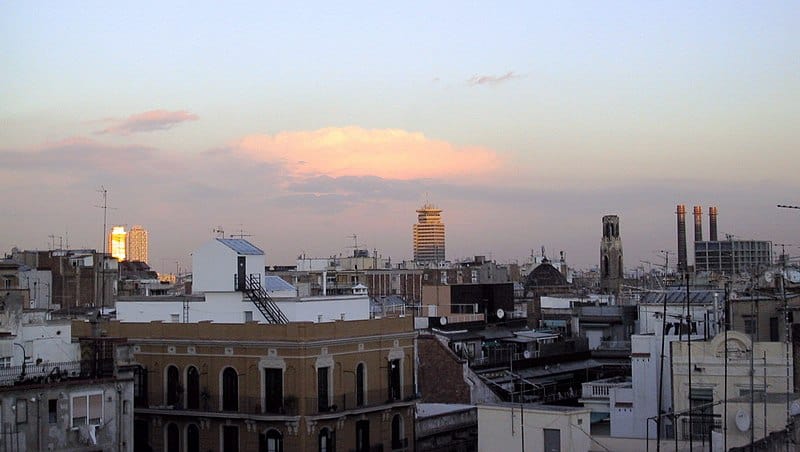 It often goes overlooked by first time visitors to Barcelona, but the truth is Poble Sec has some of the best nightlife as the establishments are all still new and wanting to thrive. This has created a demand for boutique hotels in the immediate area, and Airbnbs have naturally followed suite.

You’ll pay a lot less in Poble Sec for the equivalent space to Airbnbs in el Raval and the Gothic Quarter. 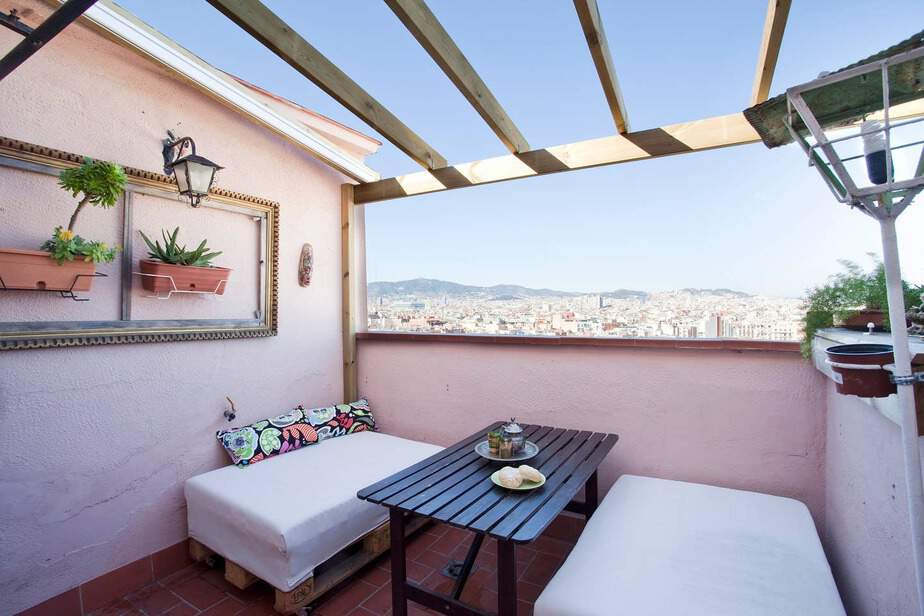 Airbnb in Poble Sec – by Airbnb – Sourced from their website

We are eternally indebted to the beach gods for giving us the Barceloneta beaches in 1992. Imaging visiting this city without the option of one or two days on the sand?

Staying is Barceloneta is a really nice balance between coastline and city. The city is within easy walking distance, and you’ll wake up to the smell of the ocean each day which sounds like a beautiful way to start the day in Spain, don’t you think? 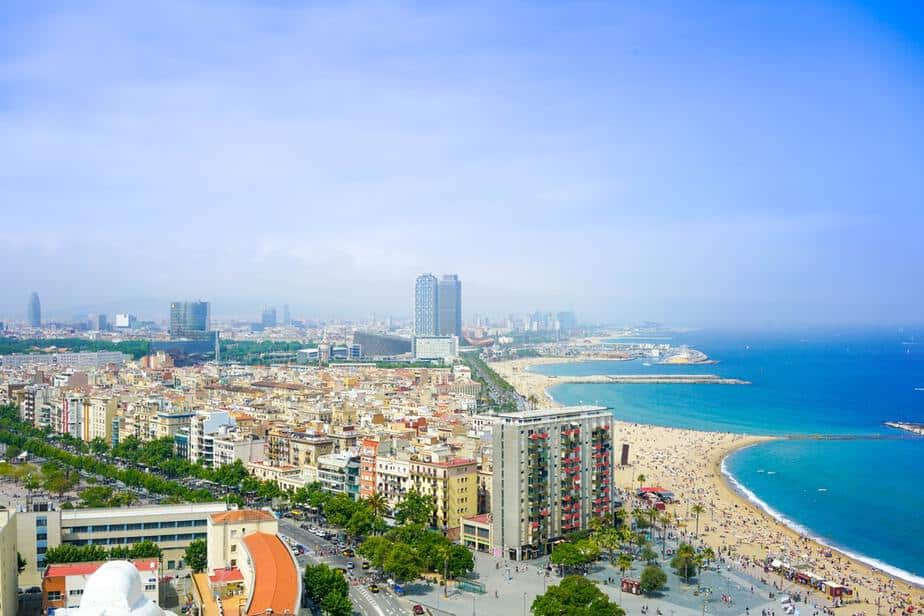 The restaurants in Barceloneta silently compete for who can make the best paella in Barcelona. You will eat if you Airbnb here, and you’ll eat well. There are also many beach bars for sundowners at the end of each day.

Barceloneta gives your trip to Barcelona a beach vacation feel. I’ve known a few travelers to actually divide their stay up and spend half at an Airbnb in the city center, and then the rest in an Airbnb by the beach. Just a thought. 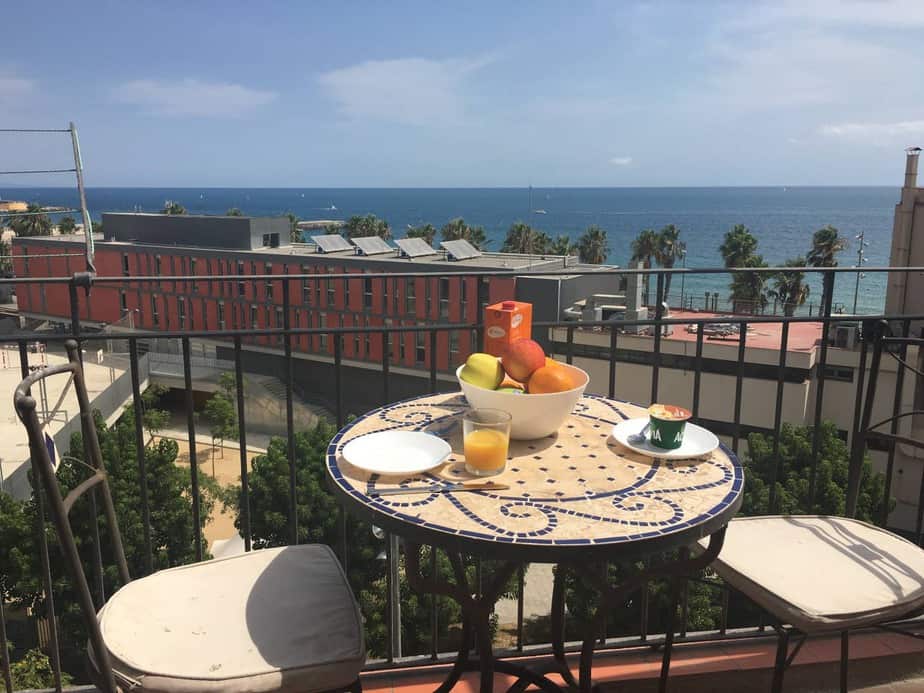 Airbnb in Barceloneta – by Airbnb – Sourced from their website