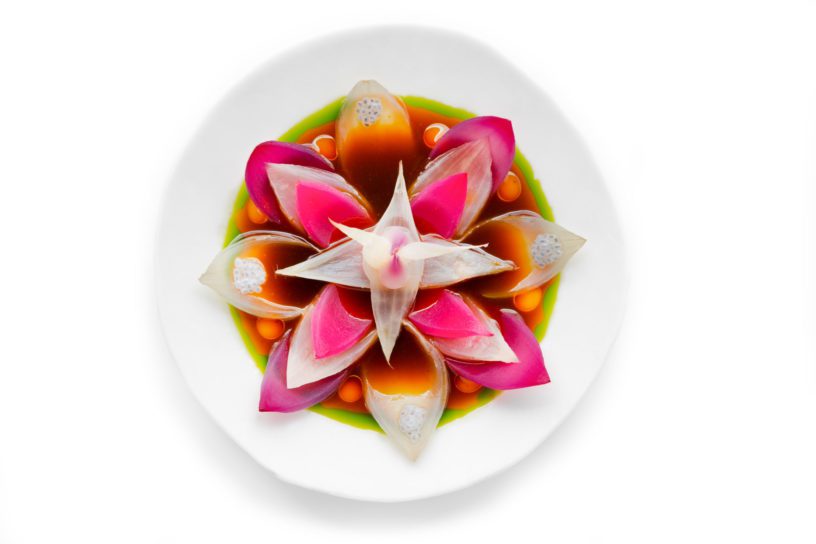 Food and Barcelona – they just go hand in hand. The culinary culture of this magical city is unique, even when not frequenting Michelin star spots! The creativity that Barcelona exudes is not limited to the arts and is very often expressed through food. Eating and sharing meals is a huge part of Spanish social culture, hence the idea of tapas. It is no surprise then, that the city of Barcelona takes food very seriously.

Presenting the Best Chef in Barcelona, if not the world: Albert Adrià

The first two restaurants on my list are the brain children of Albert Adrià. Albert is one half of the Adrià  duo behind the inimitable El Bulli. El Bulli sadly closed its doors in 2011 but is still considered the birthplace of modern cuisine. Since El Bulli’s closure, Albert has continued his gastronomy journey and to this day, is considered one of the greatest chefs in the world.

In Barcelona, he has created 5 different concept restaurants under the name ‘El Barri’. These include the Michelin star restaurants Tickets, Enigma, Pakta and Hoja Santa. It goes without saying that if you are able to visit any one of these incredible restaurants, you really should. Any of them would be well worth the visit while in the city. Just don’t forget to book!

1. Tickets: Feel like a child again at this playful tapas-bar

“La vida tapa” is the tagline used to describe Tickets, the unique foodie delivery from Albert Adrià. It is part of the El Barri family of restaurants and offers an extraordinary tapas experience. Over and above the food, Tickets is a fun-filled  space where anything could happen! The restaurant is based on the concept of a magic circus and includes fun elements like a ticket box reception and giant stuffed strawberries hanging from the ceiling. 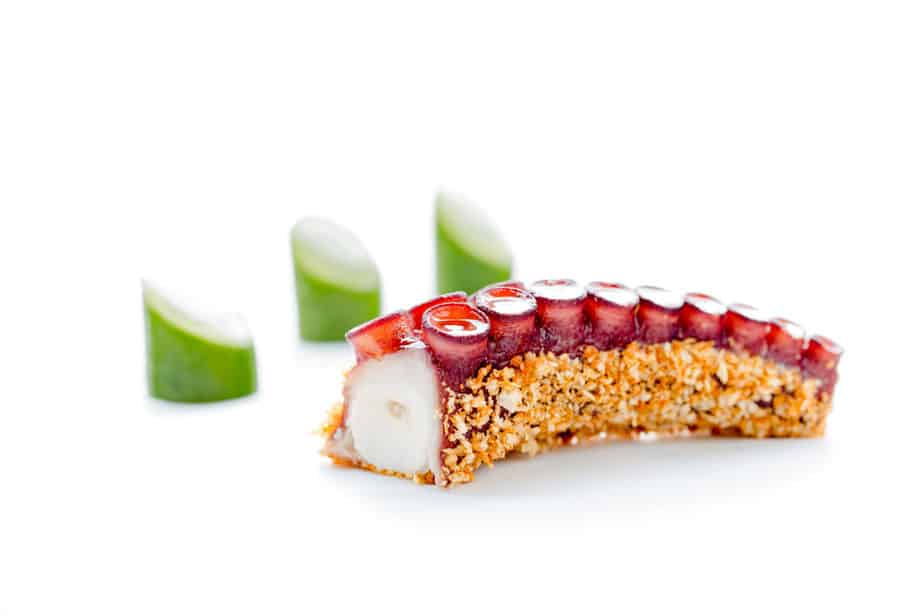 Crunchy octopus with kimchi mayonnaise and pickled cucumber from Tickets. Image by moitorne.com, sourced from elbarri.com.

The whole experience is magical, from the moment you approach the ticket box. You may hear the ringing bell of an ice cream truck or see flames appearing out of nowhere. If the sights and sounds make you think you have lost your mind, rest assured you haven’t. Albert Adrià has just always loved magic tricks and this is at the heart of Tickets. 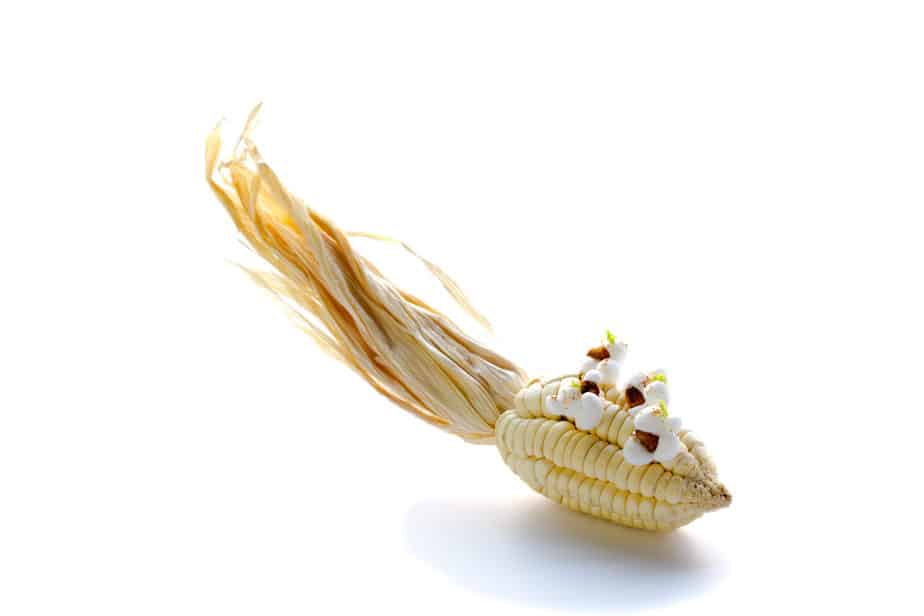 On the menu you can expect tapas style tasters like Avocado Pizza, Tarragon Air Waffle, Enigma Oysters and Three Pigs Brioche. They sound off-the-wall because they are! Even if you might not think so at first, Albert Adrià knows what he is doing. Give him your trust and he will blow your mind!

2. Enigma: Lose yourself in mystery

Enigma is the second project of Albert Adrià to feature on this list. Though without the playful charm of tickets, Enigma is a extremely impressive culinary achievement. As the name suggests, the restaurant holds mystery at its core. It is made up of ‘the kitchen’, ‘the cellar’ and ‘the cocktail bar’ and covers an impressive 700㎡. The atmosphere is moody and sophisticated, with lighting being an important and dazzling feature. 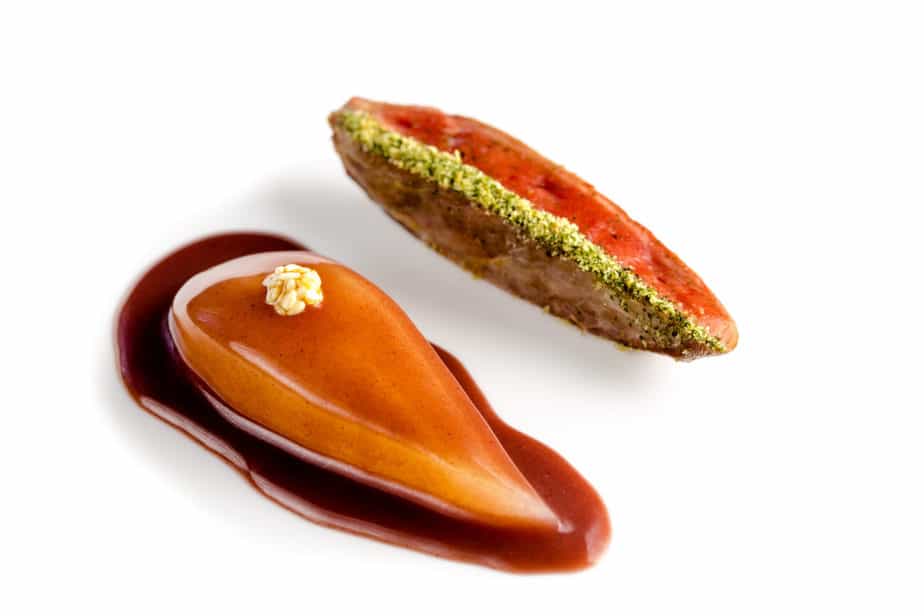 Enigma’s Pear with Pigeon. Image by moitorne.com, sourced from elbarri.com.

Don’t be fooled however, by the size of the space. Enigma can only hold 28 diners at a time. This is because the ‘tour’, as they call it, takes place within six different rooms. Diners move through the rooms as they move through the menu, creating a complete sensory journey.

Due to its mysterious nature, there is no sample menu available. The experience however, includes around 40 different ‘elaborations’. And yes, that means courses! Fish is very often the hero in the dishes of Enigma, though the menu changes seasonally and can vary from day to day. 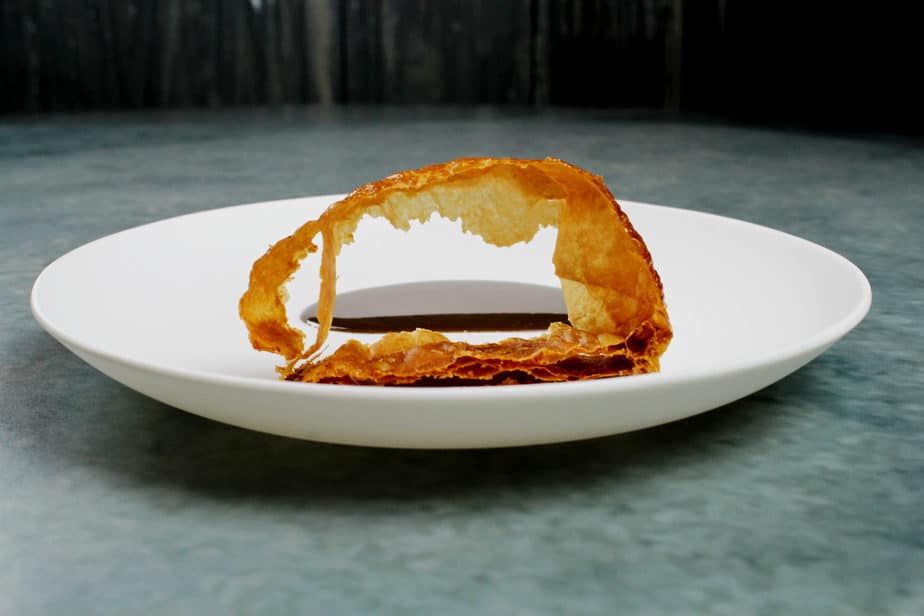 The Air Croissant at Enigma. Image by moitorne.com, sourced from elbarri.com.

The whole experience of Enigma lasts at least three hours. So be prepared for a long haul – you are going to love it!

3. Enotecta: Indulge in the contemporary

Paco Pérez is the chef responsible for the impeccable experience that is Enoteca, and has been since 2008. He began his culinary journey at his family’s tapas bar. Gastronomy became his focus once he had completed his studies. He then went on to work in restaurants all over Europe, including El Bulli. 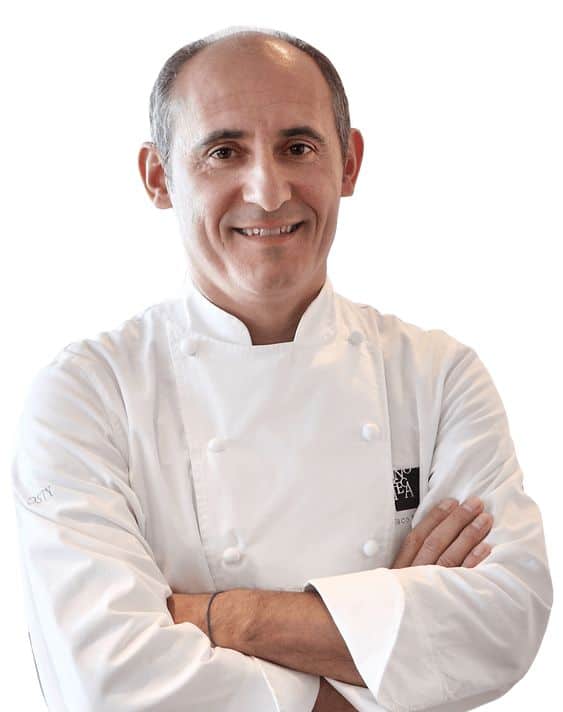 Enoteca is located in the Hotel Arts Barcelona. Pérez’s mediterranean and coastal roots shine through in his Enoteca menus. He takes much inspiration from the natural world around him: mountains, farms and ocean. The combination of quality ingredients using a mix of modern and traditional techniques, give his food a contemporary yet authentic appeal.

Olive oil, wheat and wine are the three heroes of Paco Pérez’s menus. These notably mediterranean flavours are used to enhance and be enhanced by the secondary ingredients and components. When paired with wine, this is a mediterranean experience like no other. 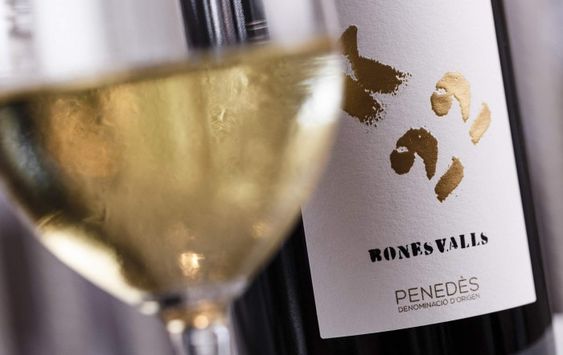 Dishes on the menu include combinations like ‘Almond cream, calamari and capuccina’, ‘Boletus, crayfish, fig, silky forest sauce and mole’ and ‘Red fruits, yogurt, black sesame and vanilla’. Boletus is a mushroom producing fungi – definitely worthy of the tastebud tingles! 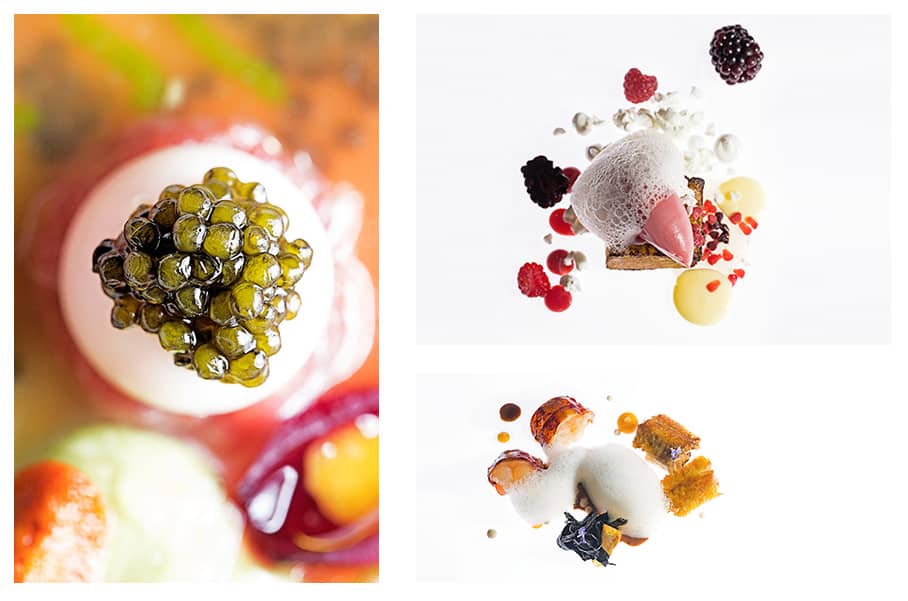 4. Moments: Be charmed by your favourite fairy tales

Moments is run by the mother and son duo Chef Carme Ruscalleda and Raül Balam. Carme Ruscalleda is not new to the gastronomy scene and has seven Michelin starts under her belt, from restaurants all over the world. Moments is a celebration of Catalan cuisine, done with impeccable taste. 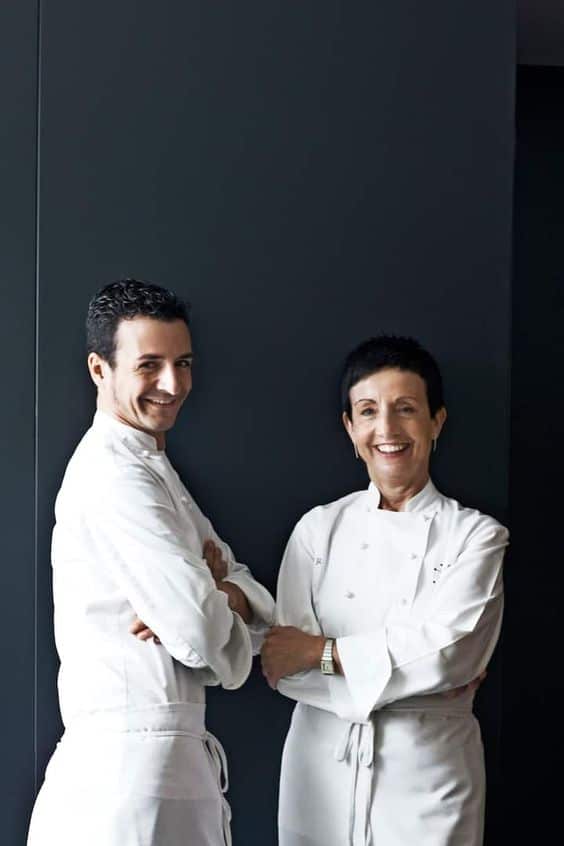 The well-known Spanish designer, Patricia Urquiola conceptualised the interior. It is both warm and modern and definitely has a woman’s touch! A cascading wall of greenery runs alongside expansive floor to ceiling windows and bring the outside in. Golden elements on the floor and ceiling give patrons a feeling of an impending adventurous journey. 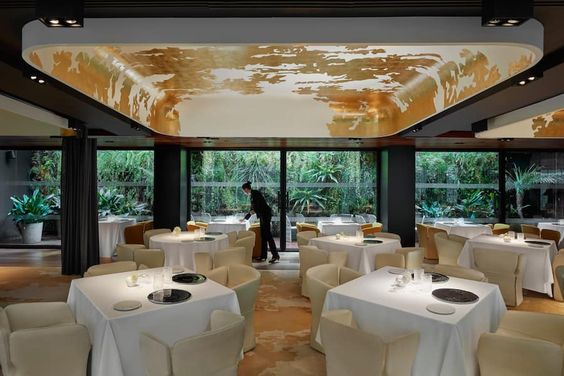 Urquiola’s interior is warm and contemporary at the same time. Image sourced from Moments official website.

This is not just a feeling, as Ruscalleda’s menus invite ingredients and techniques from the world over. Each dish is playfully given the name of a familiar children’s fable, like Little Red Riding Hood and Snow White. There is even a dish named after Shrek! The flavour combinations are of the kind that need to be experienced and not just read about. Delightful decadence is what awaits you at Moments. Hurry and book, before the Moment’s gone!

Jordi Cruz is a Barcelona-born culinary hero. He received his first Michelin star, at Cercs Estany Clar, when he was just 24 years old. He then moved on to Angle, where he worked for 6 years and achieved another two Michelin stars. Next, he set his sights on ABaC. ABaC is now one of only two restaurants in Barcelona to have obtained three Michelin stars. 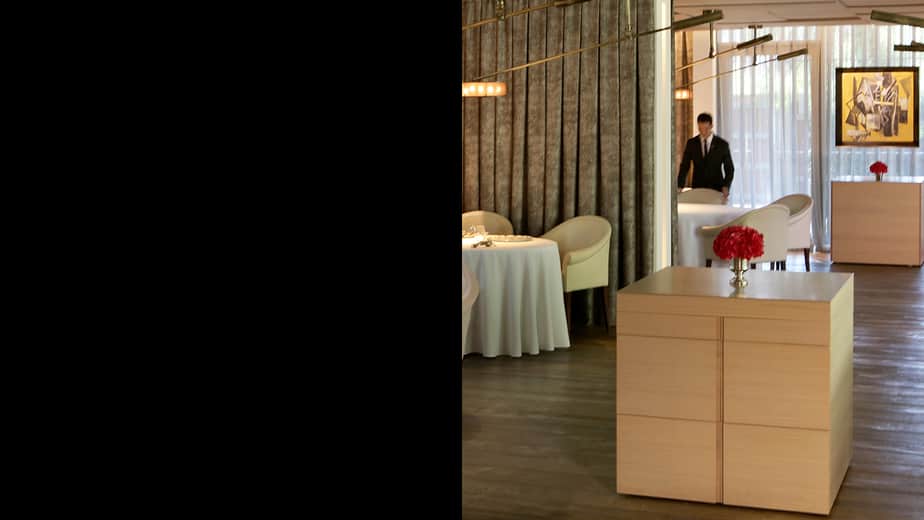 The smart and chic interior of ABaC acts as a backdrop for the taste experience. Image sourced from ABaC official website.

Tradition and modernity are masterfully fused through high quality produce, to create the ABaC experience. Tradition is the grounding, understanding and perspective that feeds the experimentation, play and surprise of the modernity.

The components used to describe Cruz’s ABaC menus are ’50% passion, 50% avant-garde, 100% product’ . The two menus on offer are extensive and expensive, but guarantee an experience unlike any other. The menu takes you from the terrace to the kitchen and finally into the restaurant. 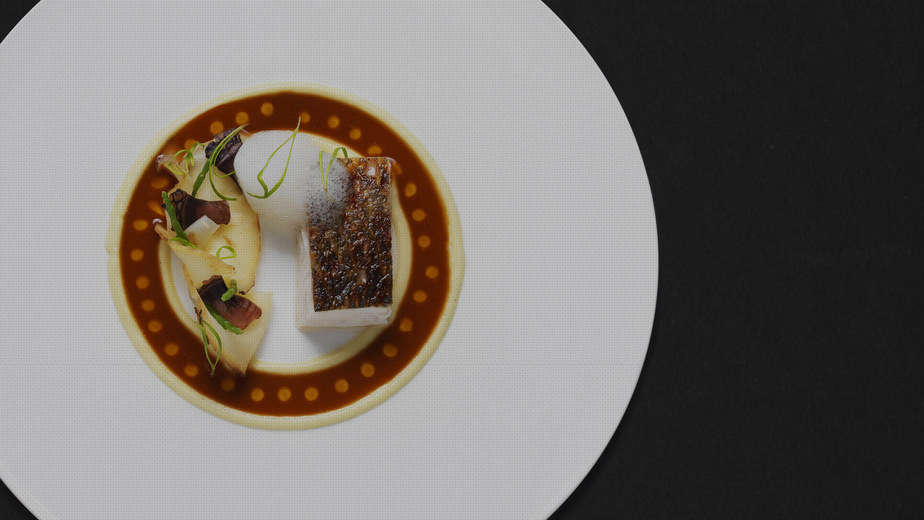 An experience to delight all the senses, the first being sight. Image sourced from ABaC official website.

You can expect wild ideas like Nitro Margaritas, anchovy shavings, cheese Chinese buns and “water and powder” marshmallows. A dash of ‘fleeting bitterness’ and sweet pumpkin will end it all off. If you find such culinary concepts conjured up by Cruz somewhat confusing, you are not alone. You’re just going to have to trust him. He’s not a Michelin star man for nothing!

6. Lasarte: Marvel at modern magic of

Lasarte came into existence in 2006 in the Monument Hotel and was awarded its third Michelin star in 2017. Chef and owner Martín Berasategui took an interest in food from a young age. He gained much of his knowledge from his family kitchen. Lasarte is hailed as one of Catalonia’s very best restaurants because of the deep-rooted culinary culture that Berasategui brings to the table. 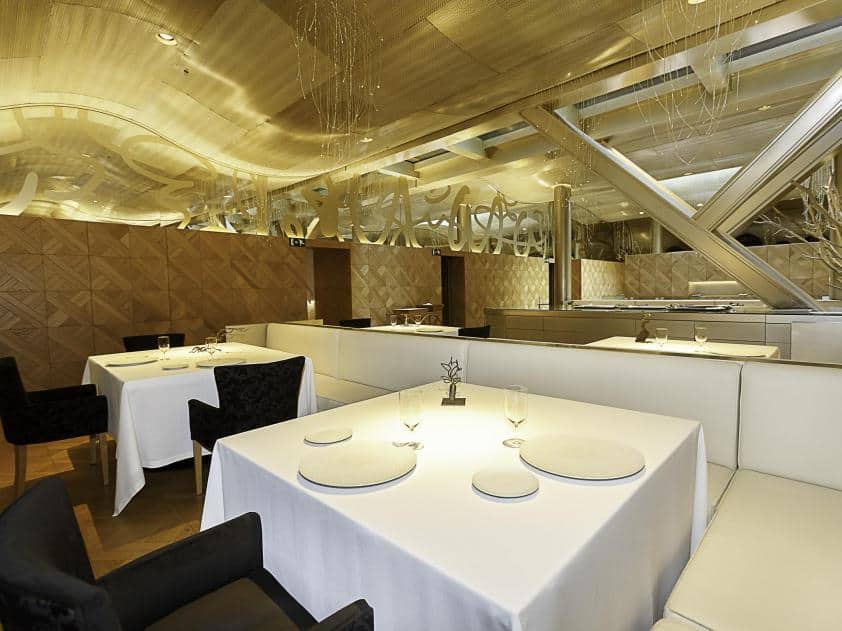 The beautifully calming interior of Lasarte is a great setting for an extraordinary foodie experience. Image sourced from Lasarte official website.

Berasategui is also a master teacher and thrives off of sharing his knowledge. He takes pride in his team and gives them credit for contributing to his signature style. Berasategui and his team find much inspiration in nature. At Lasarte, they aim to create an extraordinary gastronomic experience and use this as the basis on which everything else rests. 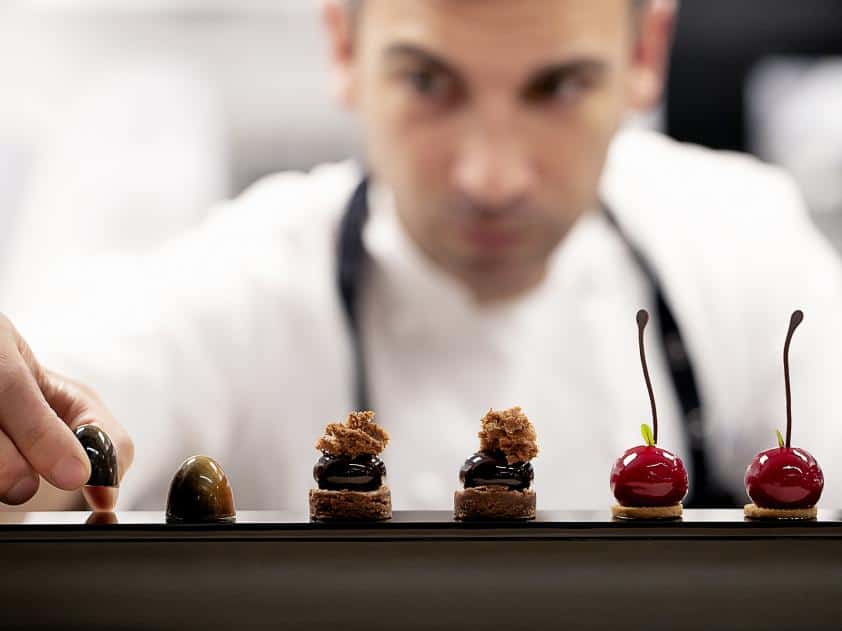 A small taste of what you might expect from Berasategui and his team. Images sourced from Lasarte official website.

The Lasarte menu is understandably expensive (this is a 3 Michelin star restaurant after all). But if food is your thing, it is definitely worth the treat! You can expect seven courses, including flavours like mustard ice cream, smoked squid ink risotto and almond and salt praline.