5 Cheap but Great Places to Drink Beer in Barcelona 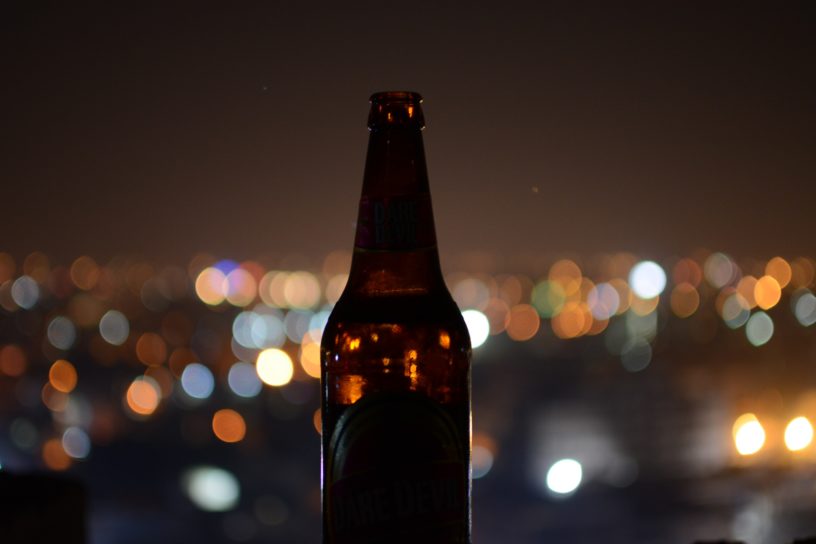 5 Cheap but Great Places to Drink Beer in Barcelona

I love Barcelona for many reasons, but one that stands out on a regular basis is just how easy it is to spend next to no money while still having an above average good time.

If you know where to go, Barcelona can be a playground for the broke and budgeting. It’s the kind of city where spending €300 on a high end dining experience is there for the taking, but a few doors down there’s a beer special for your loose pennies.

Did the beer specials catch your attention? Let’s talk more.

I was fortunate enough that the first people I befriended in Barcelona were a crew would could sniff out cheap beer in the most affluent of spaces.

I learned early on that Barcelona’s Old Town will usually always have your back if you give it the chance.

Sugar is in the Gothic Quarter. It’s a no frills, but no nonsense, bar that prides itself on drinks specials unmatched in other areas. If you ever overhear someone remarking about the delicious €3 Mojito they had on a night out, this is the spot. 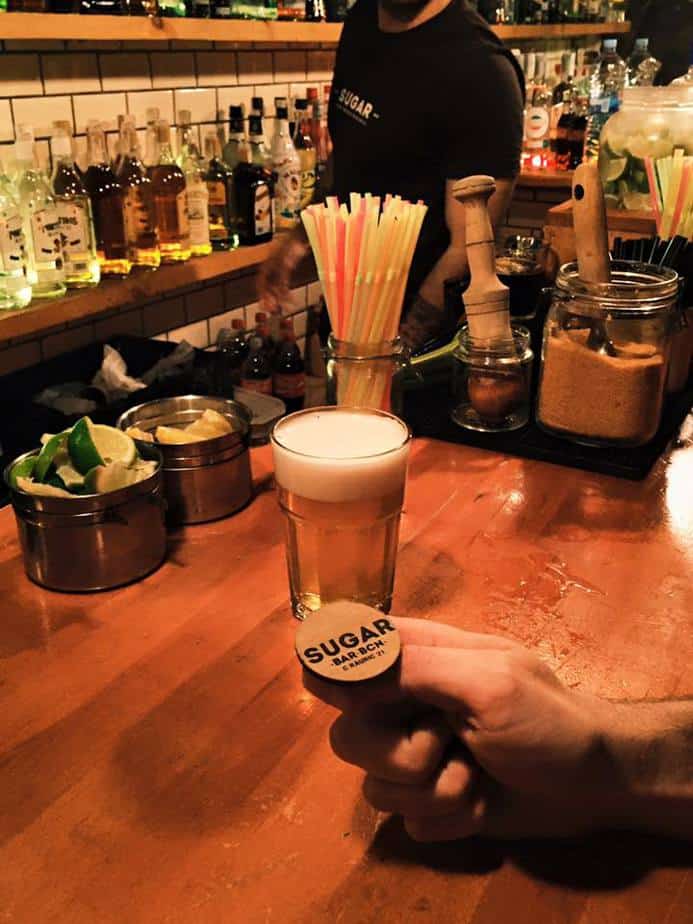 Sugar in Barcelona – by Sugar – Sourced from their Facebook

Sugar does a nightly hoary hour that starts at 6pm sharp. From this point on, no drinks in the vicinity can cost more than €3. Beer will be considerably less, but you can also opt for their beer-and-a-shot special that gets you both for €3.

What’s great about Sugar is that even the music is good, so you’re drinking here because it’s actually fun, and not just because it’s cheap.

Bar Manchester is actually around the corner from Sugar; about two minutes on foot.

Firstly, one needs to understand the vibe at Bar Manchester before they can decide if this is the spot for them or not. As the name suggests, this is a rendition of a traditional English pub.

The soundtrack is consistent at all times, featuring rock hits from the 80s, 90s and 2000s, with the occasional indie tune thrown in for good measure. 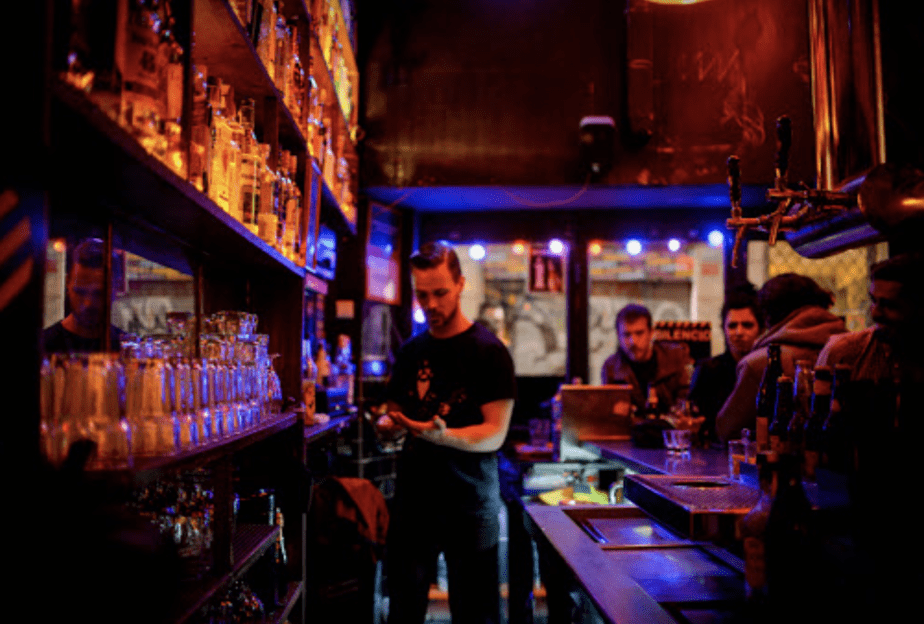 Happy hour is a big deal at Bar Manchester, and is on offer right through until 10:30pm every day. During this time, beer costs just €1.50 while cocktails will set you back €5.

Something to note is that Bar Manchester serves Heineken as their house beer, so specify something different if this is not to your taste.

What is it about 90s rock and cheap beer that seems to effortlessly fit together? L’Ovella Negra Ramblas is another bar in Barcelona’s Old Town that is now widely known for their cheap draughts on the town.

This is less of a bar and more of a cave. People come to drink, play pool, enjoy the soundtrack and snack on a wide variety of light meals on their menu. It’s got a distinct NYC vibe, and the space is almost always packed to the brim. 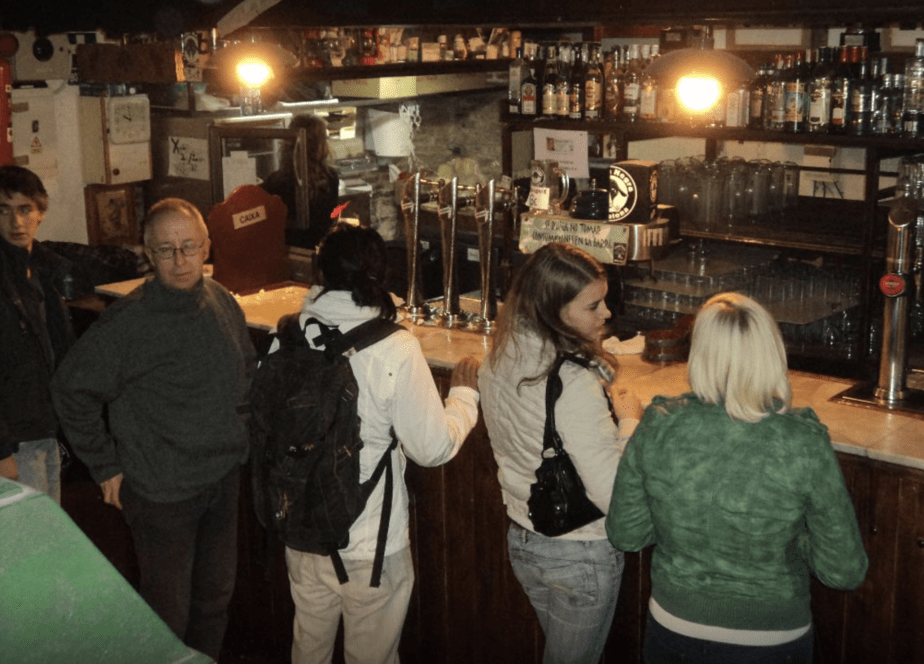 L’Ovella Negra Ramblas will serve you a half liter of beer at just €3.50. If you don’t have money left over to take advantage of their snack menu, then help yourself to free popcorn all night long.

Pints of sangria also cost €3.50; something worth noting.

This next bar is an interesting one, pay attention!

The name itself should give away the concept to an extend. The Dow Jones Bar; a bar where prices are based on inflation depending on product demand.

It’s unique to Barcelona in that I’ve not actually encountered anything like this elsewhere in Europe. There are no set prices in this bar, everything depends on how many people are drinking what at any given time. 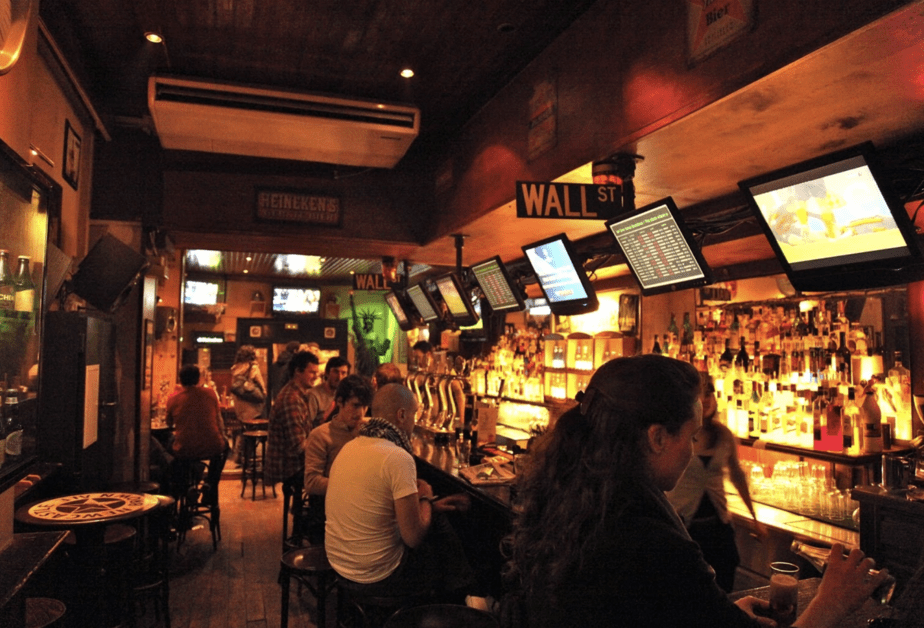 They apply this to the beers and spirits, and there is a live leaderboard on display at all times that shows the fluctuating prices of each drink. Every so often, a siren sounds in the bar and it forces the prices of certain beers to go down. As they do, more people flock to take advantage of the cheap deals, putting the beverage in high demand and pushing the price back up after enough sales.

It’s a wall street, stock market concept that turns into a bit of a communal drinking game as the night unfolds. Dow Jones Bar is considered one of the most fun spots to drink in the city.

When in need of cheap beer, it’s always a good idea to go where the students of a city go.

This bar in Old Town is aimed at students, and it’s a day drinking spot that closes early compared to the rest of Barcelona’s nightlife. You won’t be able to drink here past 11:30pm. 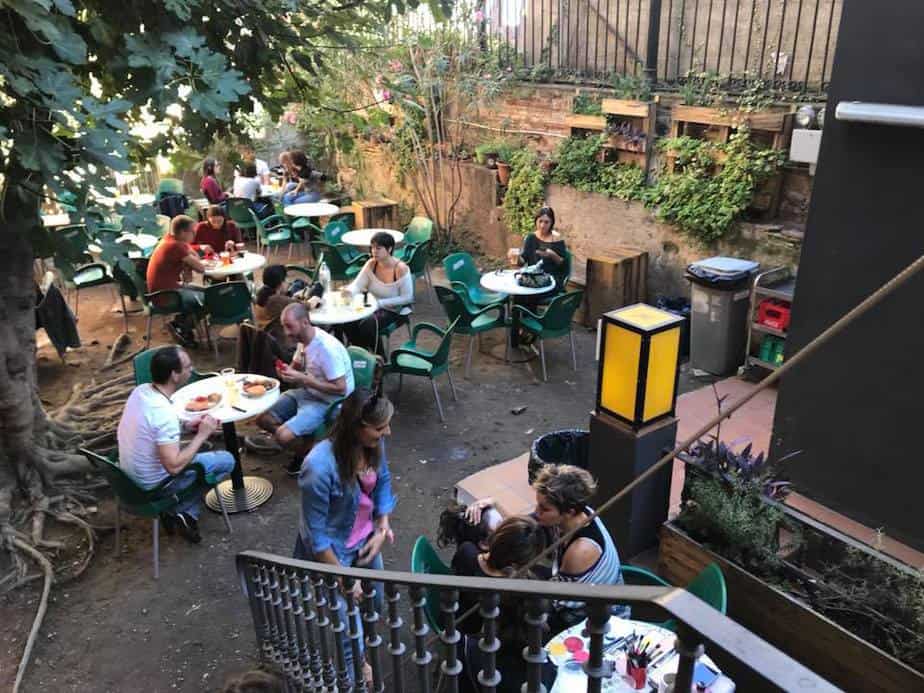 They have a great terrace area which is what makes this place so popular. Drinking cheap beers under the trees in the summer isn’t something that occurs often in the city. Bars with terraces tend to charge a lot more for their drinks as they know people will fork out the cash just to be outside.

It is common for people to start their evenings at Bar l’Antic Teatre, and move on to their next drinking destination once food stops being served around 10:30pm.