10 Things to do on the Beach in Barcelona 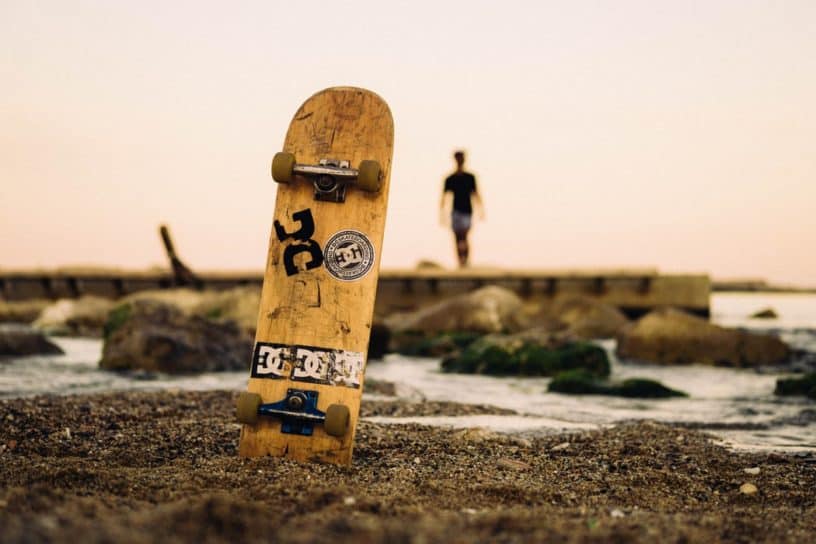 10 Things to do on the Beach in Barcelona

A little modern-history trip before your actual trip to Barcelona. Prior to 1992, Barcelona actually had absolutely no beaches. The coastline was a cluster of industrial land and fishing ports; there was no recreational options for the people at all.

Things changed when Barcelona was selected to host the Olympic Games in 1992. This lead to the decision to transform the coastline into a synthetic beach — and thousands upon thousands of tons of sand was flown in from Egypt to do so. 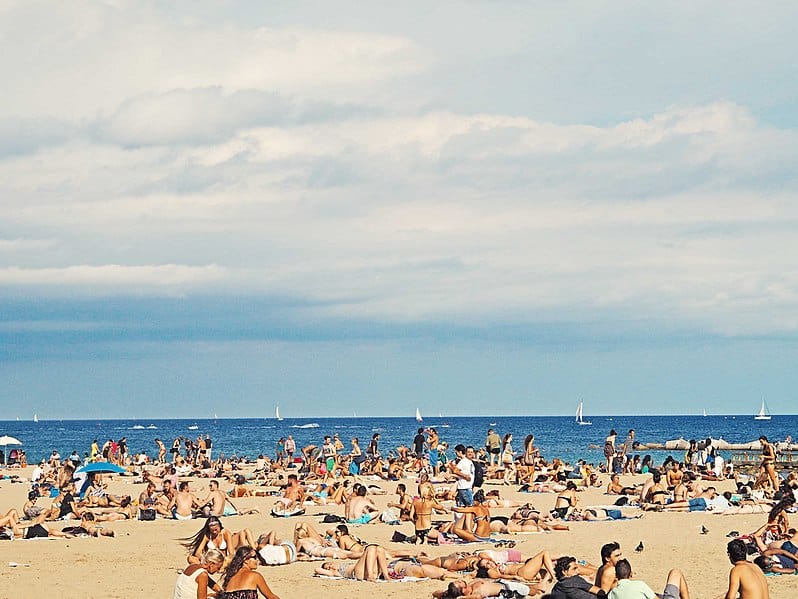 The beach of Barcelona stretches 4km down the east coast of Spain. It’s transformed the city in ways that none could have predicted; putting Barcelona on the map as one of the top beach getaways in the world.

Here are ten things to see and do while on this iconic strip of sand.

1. Walk Across All Four Beaches in Barcelona

The 4km stretch of the city beach, Barceloneta, can be broken up into four main sections. It’s the ultimate “walk on the beach” for the hopeless romantic and it just goes on and on and on…

Even in the cooler months, a walk across Barcelona’s beaches is a worthwhile outing. The Spanish coast is beautiful year round. Alternatively free guided walking tours can be taken just inland, close to the city center. 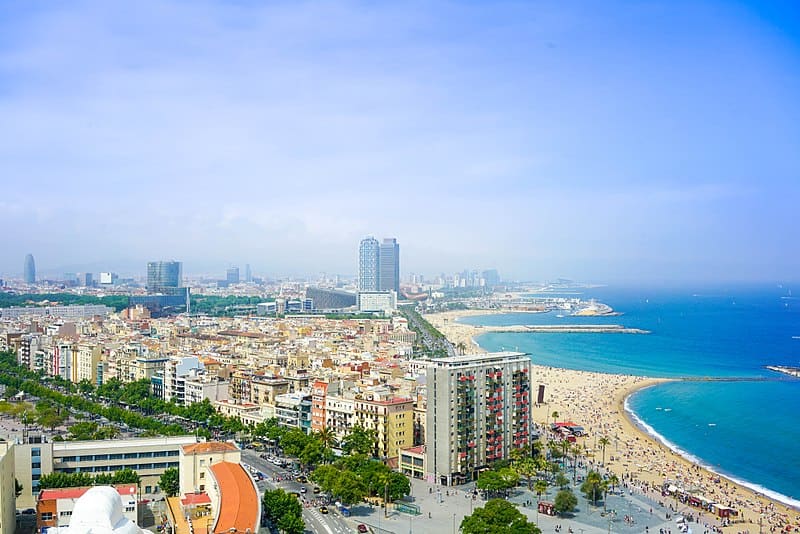 2. Catch the Cable Car from the Beach to Montjuïc in Barcelona

The beach of Sant Sebastià holds a cable car station; you can see the cars riding throughout the day as you laze on Barcelona’s sand.

The hill of Montjuïc is the highest point in Barcelona and is known as an iconic viewpoint. Each evening hoards of people make their way to the summit to watch the sun go down over the city.

You can ride right over the city itself, from the beach to Montjuïc and back again if you like. Tickets are purchased from inside the station. 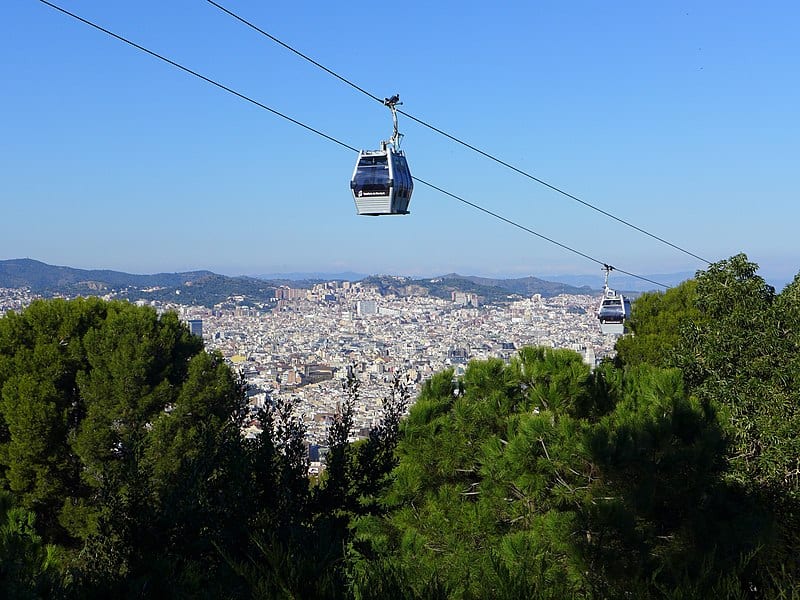 3. Rent Hover Boards on the Beach in Barcelona

You’ll see a lot of people riding down the coastline on hover boards while at Barcelona’s beach. These nifty devices can be rented by the hour from the Olympic Port.

It’s not the cheapest activity you’ll do while in town, but it’s good fun and suitable for children as well!

4. Take a Sailing Trip from the Beach in Barcelona

Barceloneta links up to the Barcelona ports. From here it’s an option to take a sailing trip with one of the many companies offering the service.

On a hot summers day there is really nothing better than escaping the crowded beaches and taking to the sea. Excursions range between a few hours to full day retreats and can be booked on a whim directly in the port, or online in advance.

5. Play Volleyball with Strangers on the Beach in Barcelona

The massive stretch of syntactic beach in Barcelona allowed for sporting infrastructure to take high importance. While football teams take up large portions of the sand for informal games, there are even larger spaces dedicated solely to volleyball.

Travelers and locals come together each day and play together, sometimes even in professional tournaments. Don’t be shy and join in — all are welcome. 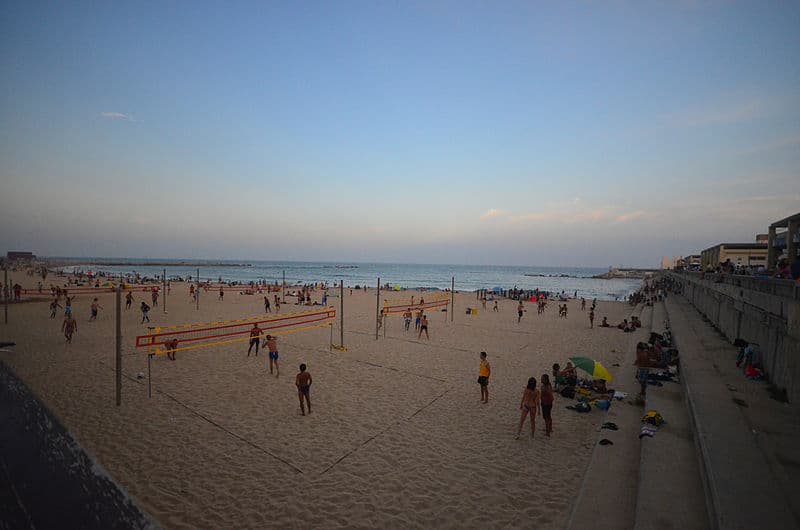 6. Visit the Aquarium from the Beach in Barcelona

The beach in Barcelona gives you quick access to the Port Vell. This port is home to dozens of authentic Spanish restaurants all competing for who makes the best paella.

This is also the home of Barcelona’s aquarium. The facilities are impressive, with unique underwater tunnels that showcase over 11,000 aquatic animals. It’s as mind blowing for adults as it is for children.

7. Swim and Tan on the Beach in Barcelona

Seemingly obvious, but definitely deserves a spot on this list of things to do on the beach in Barcelona. As if the presence of this city beach wasn’t a treat enough, you’ll have the utter pleasure of swimming in the Mediterranean Sea, while the rest of Europes west side freeze in the great Atlantic.

For the record, nudity is technically not legal in Barcelona. But the beaches seem to turn a blind eye and allow women to go topless on the sand. The occasional 90 year old male nudist might stroll past too; you can turn your own blind eye to this one. 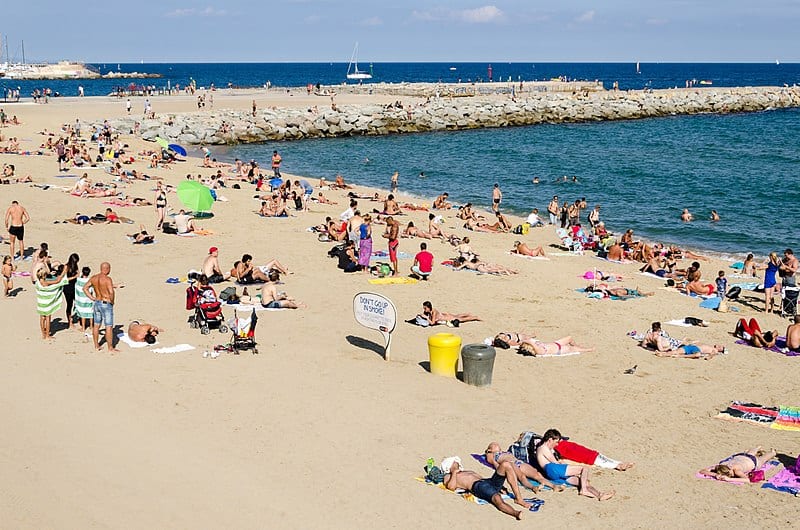 8. Jog on the Promenade on the Beach in Barcelona

One can also bring bikes, scooters, roller skates and skateboards along and make use of the wide lanes. 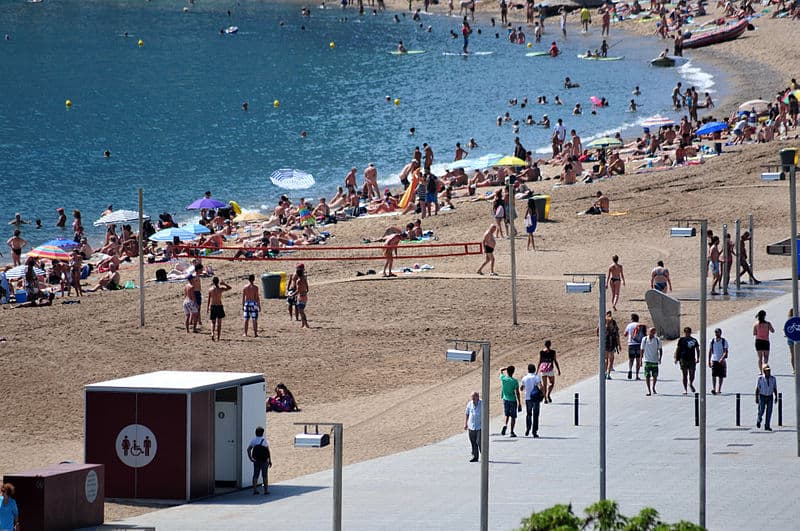 9. Join Manihi Surf School on the Beach in Barcelona

Yes, there is surf in Barcelona! The Manihi Surf School is right in the middle of the Barceloneta stretch.

You can rent boards and venture out alone, or you can join one of their workshops and head out with an instructor. They focus on both paddle and wave surfing.

10. Take a Photo With The Wounded Star on the Beach in Barcelona

The Wounded Star is a giant installation artwork that was made by Rebecca Horn during the construction of the beach in 1992. It remans on the sand to this day, and is considered an iconic city attraction.

Locals call the structure “the cubes”, because of the stacked block design. It’s one of the most photographed sculptures in Barcelona, perfect for your Instagram travel content. 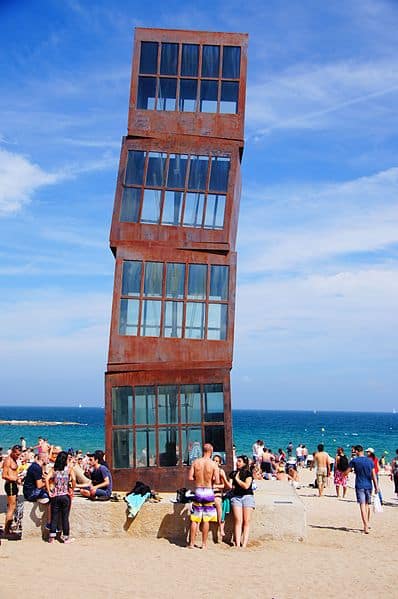