The Most Exotic Thai Fruits 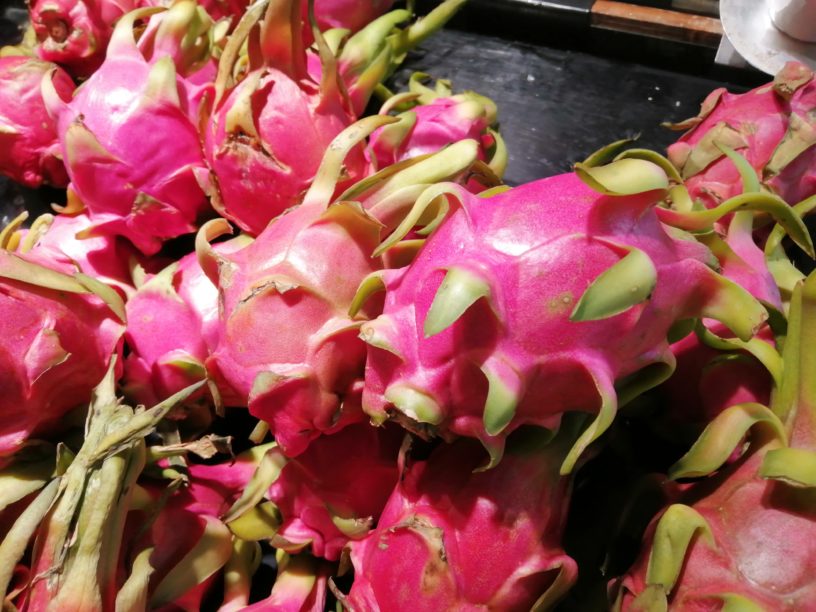 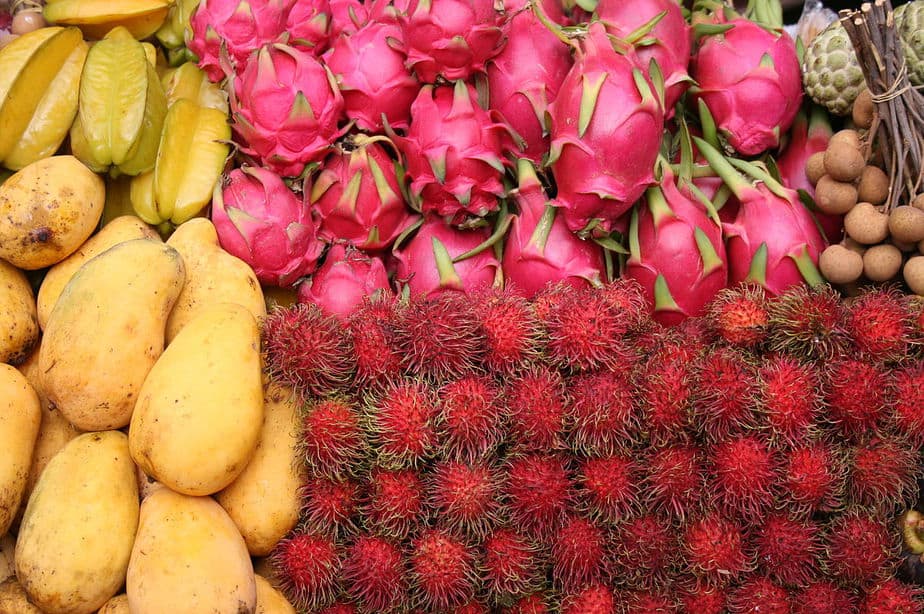 The Most Exotic Thai Fruits

The hot, tropical climate of Thailand means that it is abundant in an astoundingly wide range of fruits. This is a fact apparent to many a visitor who finds a multitude of street vendors – sometimes even on one street – selling brightly coloured, chopped, exotic Thai fruit.

Some of this fruit is relatively familiar to visitors from other regions of the world – pineapple, watermelon, pomegranate, passion fruit, and papaya, to name a few; many of these fruits are exported the world over but the amazing variety of somewhat more exotic fruit on offer in Thailand, with its bright, tantalizing colours, smells, and textures, is what interests us in this particular article.

Many of these fruits may seem strange – they certainly look it – and admittedly, there are those among them (such as durian) that may be something of an acquired taste…However, it may also be a case of ‘don’t knock it until you’ve tried it’ for the majority of these exotic Thai fruits that look or even smell a bit odd.

A real bonus when visiting Thailand and checking out some of the fruit on offer is its low cost. The seeming value for money is mainly because of the plentiful abundance of this, particularly refreshing and healthful food item. Although much of the fruit featured here is seasonal, it is still possible to find most of the year-round in Thailand, even if it is just the canned variety.

A top contender for possibly the most exotic-looking Thai fruit of all is the Dragon Fruit. So-called due to its somewhat alien-looking bright pink exterior that apparently resembles a dragon in some aspect, this is a fruit that needs to be cut and taken out of the skin to be enjoyed. 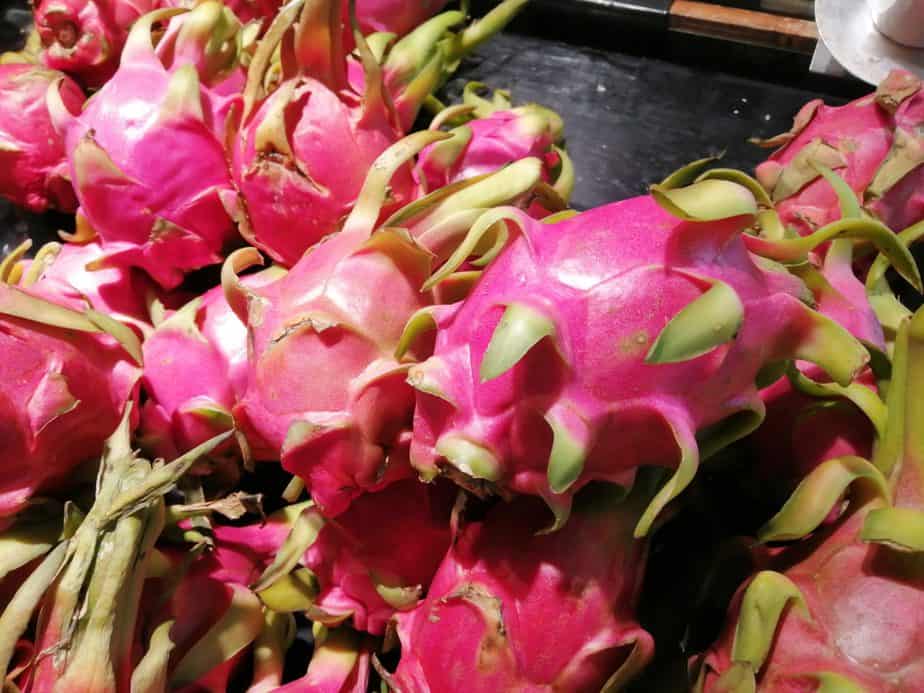 The flesh of the fruit inside the exotic skin is white, with tiny black seeds that are apparently good for the stomach, according to local lore. The fruit with the white flesh is the most common variety, but some also contain purple flesh and other, slightly less-common varieties reveal a yellow or pink interior once opened up.

The taste is sweet (although not too much) and cooling, without any citrus or sour twang, and even a small portion of dragon fruit can actually also prove quite filling. Sold as either cut fruit or by the kilo, the exotic Thai dragon fruit is a must on any hot summer’s afternoon.

Despite its huge popularity with locals (though not all) and visitors alike (it is a massive favourite with the Chinese and tourists from other Asian countries) the durian is a Thai fruit that sometimes proves a little too exotic in some instances – to the point even of being prohibited in some public areas! 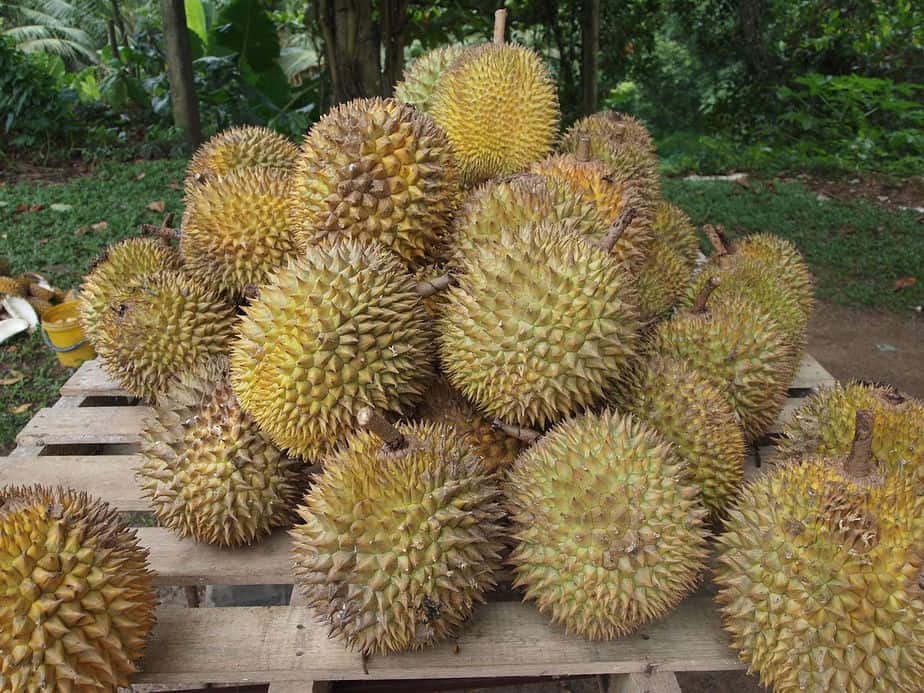 Image by Kalai sourced from wikimediacommons.com

The durian certainly does have a somewhat ‘unique’ smell that makes it easily identifiable, but its sweet, creamy (and high calorie) constitution, which is unlike any other fruit, cements its popularity.

Attempting to describe the taste of a durian fruit is a task in itself – the sulfur twang that it hits you with gives it an almost garlicky bite, and coupled with the sweet, almost custardy texture this is often an unexpected experience to many who try it.

The durian is also unmistakable from the appearance of its exterior which, once cracked open, reveals a golden yellow cluster of fruit that gives off that unique aroma in measures according to its ripeness. 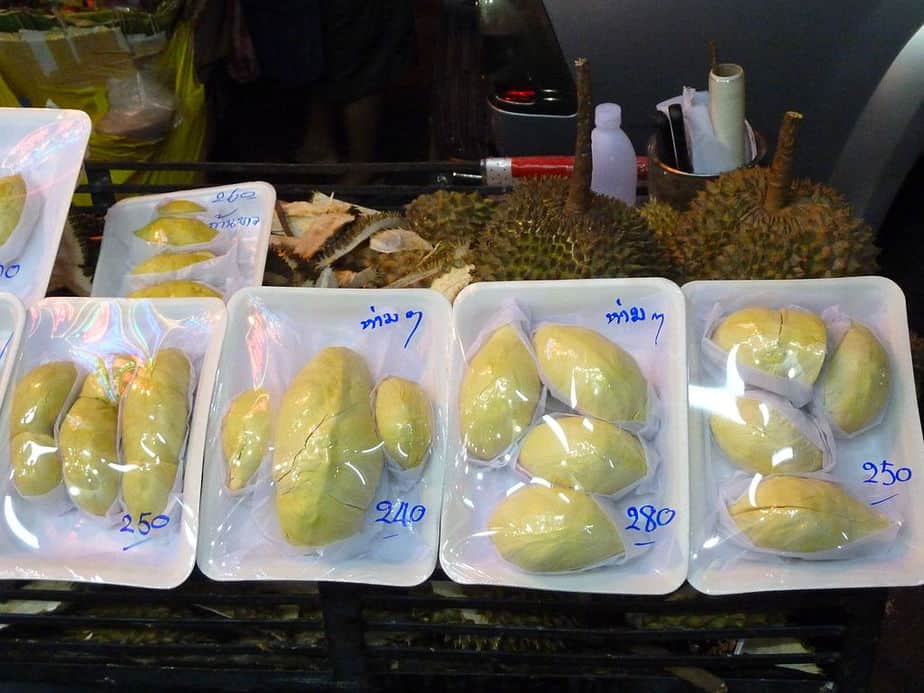 As with most fruit, there are a variety of reported health benefits from eating durian, mainly related to minerals like iron and manganese and vitamins like B and C, but it is surprisingly high in calories and is also a ‘warming’ fruit which apparently makes it unsuitable for certain groups of people. (Local women won’t eat it if pregnant, for instance.) 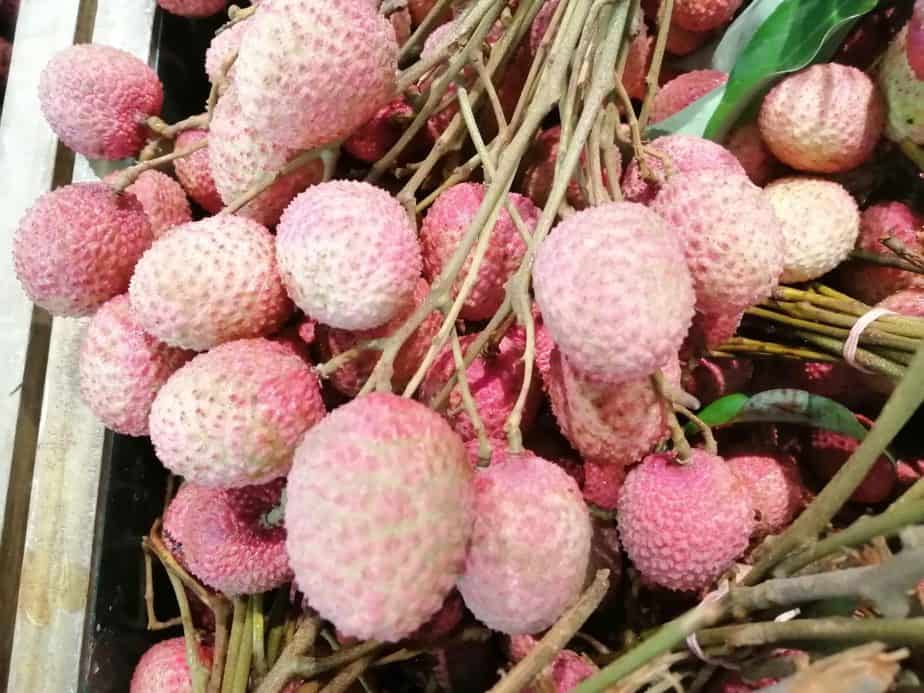 The lychee is another fruit that looks reasonably exotic from the outside. It is contained within a red, softshell with a rough texture that is easy to open, and this also gives some indication as to the ripeness of the fruit according to colour.

Inside the lychee shell or skin is found a sweet, whitish, translucent fruit with a soft texture. The fruit has a single stone or seed in the middle which should be left aside. Like many of the exotic, cooling tropical fruits of Thailand the lychee is found in many desserts and is usually in season somewhere between July and October.

The rambutan is another Thai fruit with a slightly bizarre appearance, looking not unlike a red, alien, hairy ball. Actually, the exterior isn’t actually covered in hair as such, but more of a pliable, spiny skin. 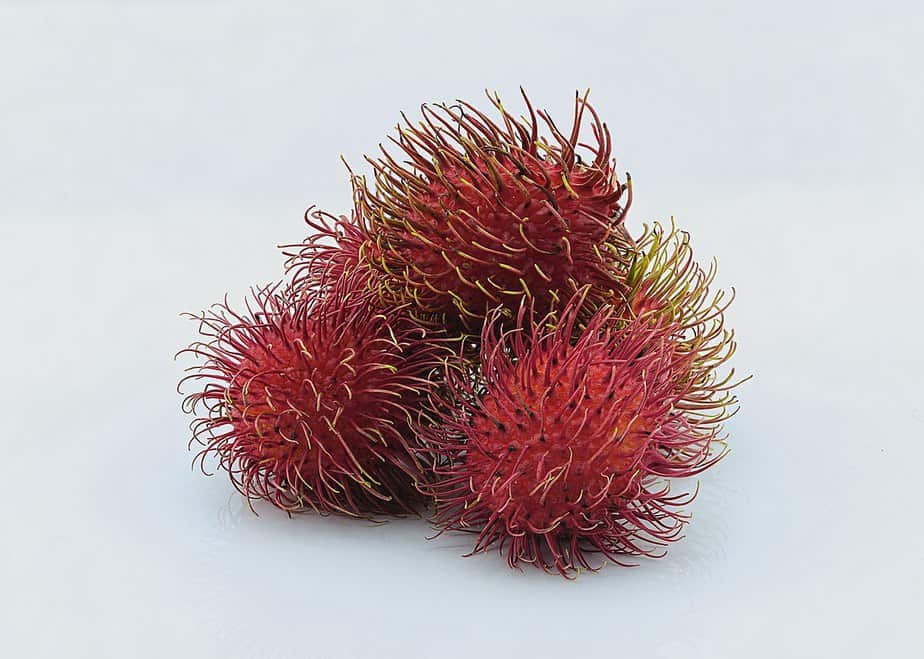 Inside the rambutan fruit can be found sweeter, grape-like, whitish flesh not entirely dissimilar to that of the lychee ( which is actually part of the same family along with yet another similar fruit not featured here known as the longan), and this again makes it a favourite of many Thai fruit dessert dishes.

The small, hard-skinned variety of Thai fruits such as lychees and rambutan are not so much sold with street vendors usually specializing in larger, cut fruit. Rather they are sold by the kilo (at around 40 baht), and there are many open-backed vans driving around selling such fruits from the back with the help of aloud speaker announcing their wares. 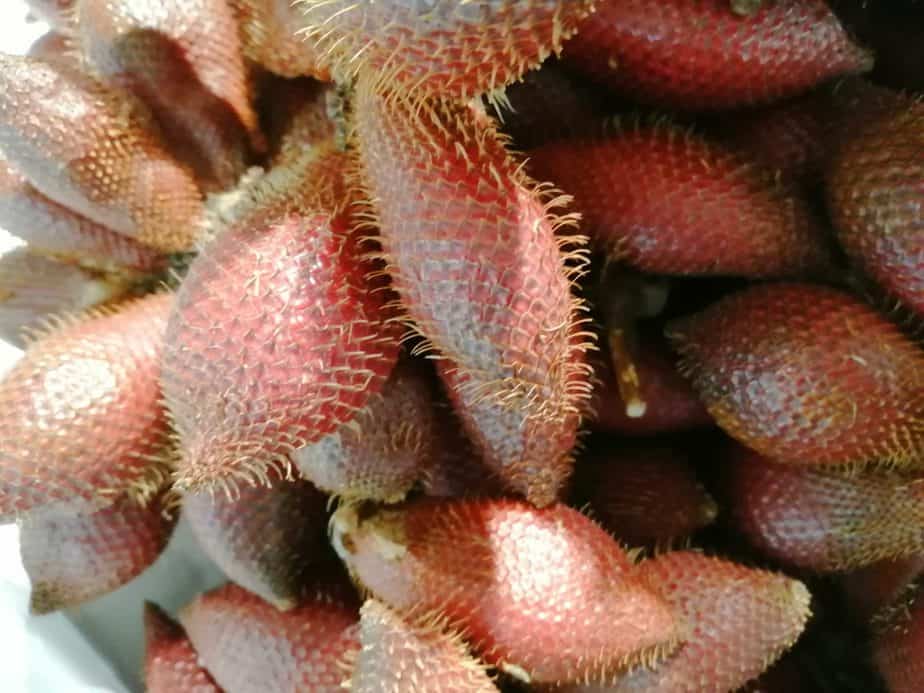 The Salacca, also known as ‘Snake Fruit’, is another small fruit with a rough, slightly spiny skin or shell (from which it gets its alternative name). It may be considered similar in some ways to the lychee or rambutan in terms of size and exterior colour, but it does actually have something of a more unique and distinctive aroma and flavour.

The salacca is another seasonal fruit that is usually found between June and August, and it has a taste that is sweet, citrusy and crunchy. This exotic fruit is found in another Thai dessert made with syrup and ice cubes (Sala Loi Kaew) 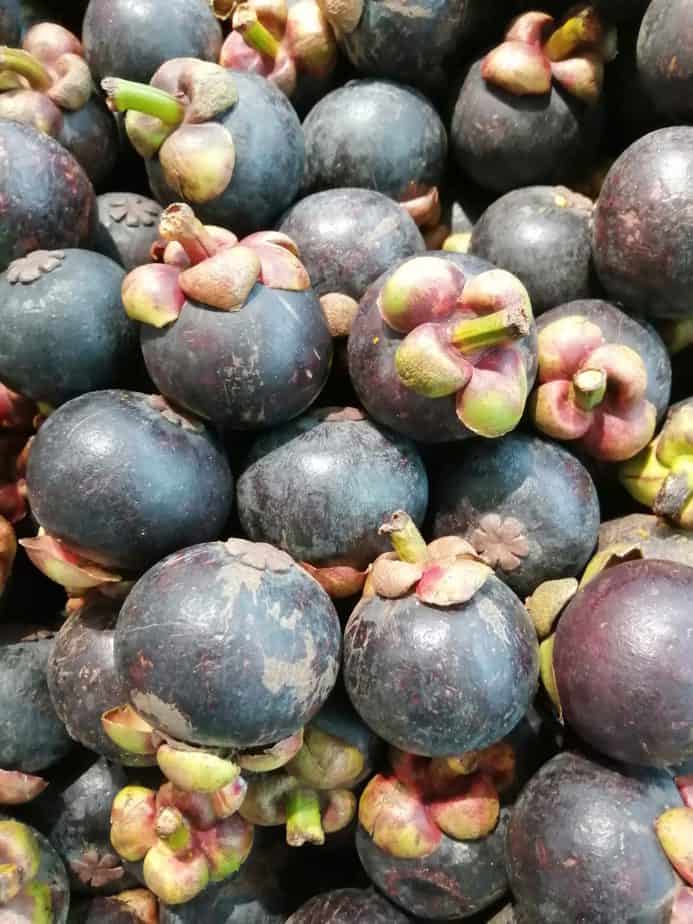 The mangosteen season comes just on the tail end of the Thai summer, from May to June. Often referred to locally as ‘The Queen of Fruits’, this regal-looking exotic fruit with its ‘crown’ on the top packs a distinctive, sweet and tangy bite.

The mangosteen is an exotic fruit not unique to Thailand in that it is grown across the expanse of SE Asia. Its skin is a dark purple colour, with the depth of the colour being an indicator towards the ripeness of the fruit. Inside the skin, the fruit is comprised of segments. These segments are white, soft, and juicy with a hint of creaminess – and they do contain seeds which are not edible.

The mangosteen is another fruit usually not sold on the carts of cut fruit vendors, again more likely to be found in either supermarkets or from the backs of the mobile fruit-selling vans who deal in kilos.

The custard apple has a somewhat bizarre and exotic-looking appearance in terms of its light grey-green exterior, which is knobbly and coarse in texture, and slightly resembles a grenade in terms of size and shape. 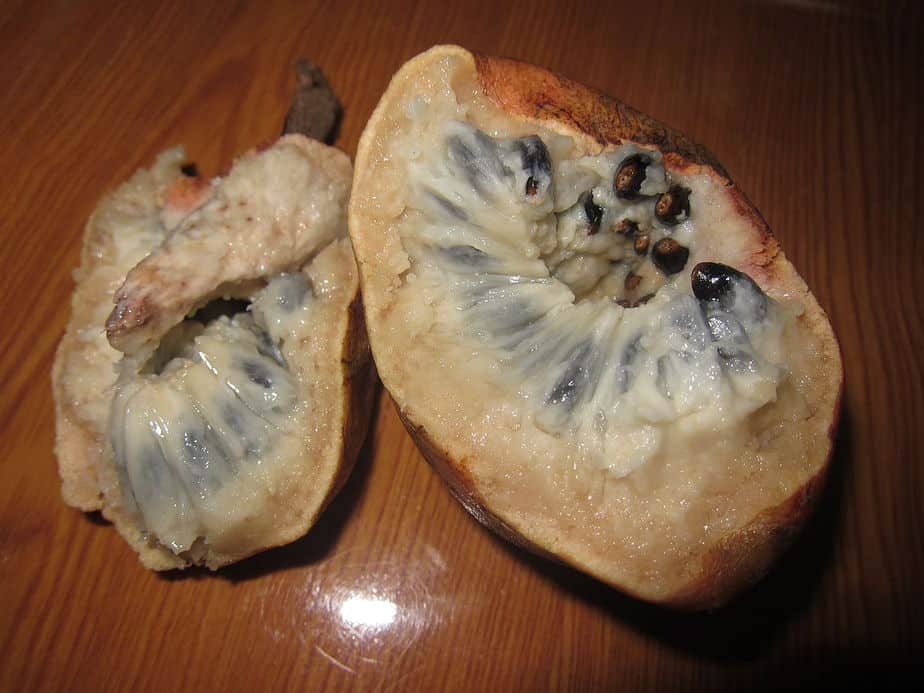 As its name may suggest, the fruit is sweet and somewhere between an apple and custard in texture and taste, with small, black, inedible seeds at the centre.

Another fruit most often found straight off the back of a mobile fruit-selling van or from a supermarket or local market, the custard apple is a delightfully exotic, and slightly unique sweet treat. 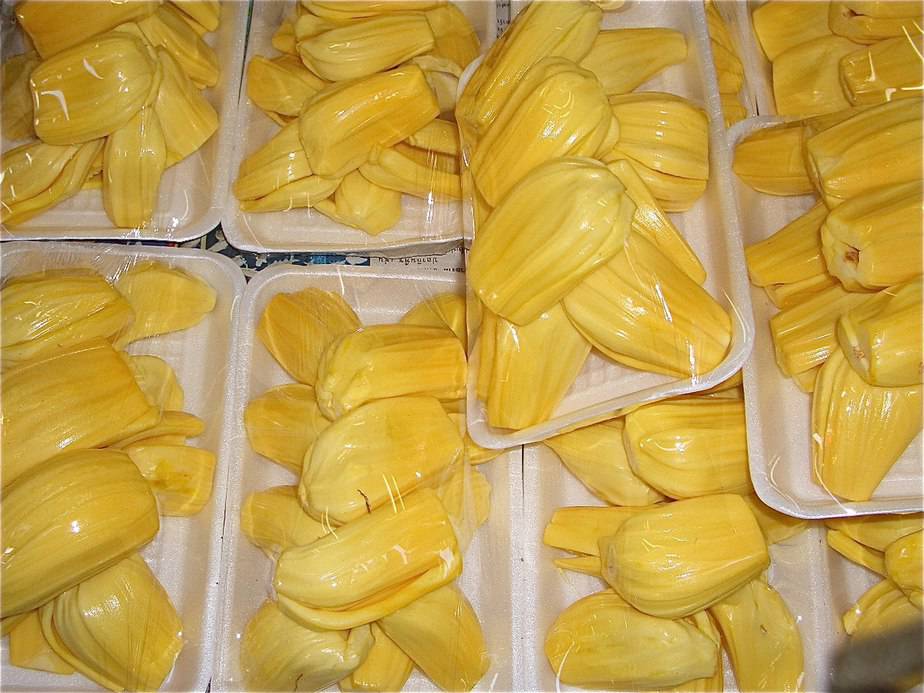 The delightful jackfruit is somewhat unique in terms of taste and texture, and also quite versatile in how it is eaten or used as part of a dessert.

The external appearance of this highly exotic Thai fruit may be somewhat misleading in that it is the size of a watermelon and is also rather heavy. In fact, the jack fruit is one of the biggest fruits found in Thailand. Inside the skin of the fruit, however, is contained a bright yellow, sweet, waxy, shiny and slightly chewy texture of flesh. 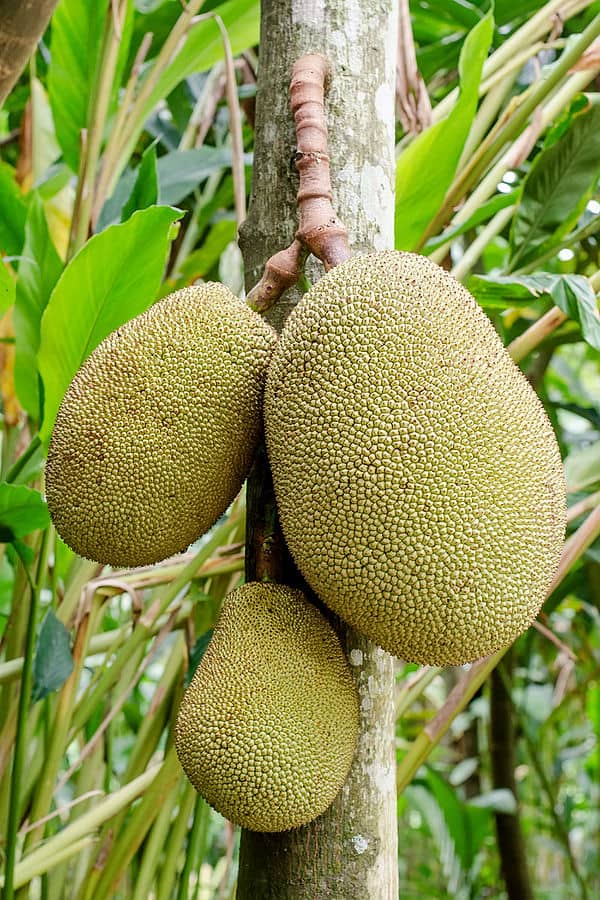 Jackfruit season is from around January to May, and this exotic Thai fruit works well in a number of Thai dessert dishes, especially those of the rather filling, sweet sticky rice variety. 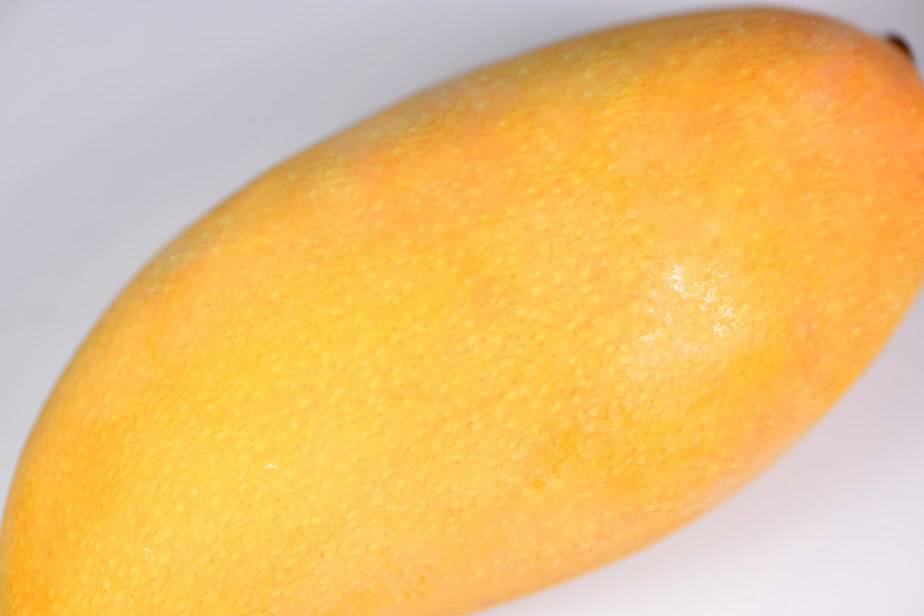 Image by One World Thailand sourced from wikimediacommons.com

Among the huge variety of mangos found in Thailand, the yellow one is undoubtedly the most exotic.

Sweet, succulent and seasonal, this is the strain of mango famously paired with sweet sticky rice as one of the prime Thai desserts. The yellow mango is, unlike many of the other varieties, a seasonal, summer Thai fruit usually at its peak of availability throughout the tropical summer season from April to the beginning of June.

Sold sometimes on street fruit vendor carts and often from the back of mobile fruit vans and markets per kilo (40 baht upwards but sometimes more expensive depending on quality and availability) – the juicy Thai yellow mango is undoubtedly a summer treat not to be missed.