The Best Ways to Travel From Bangkok to Chiang Mai 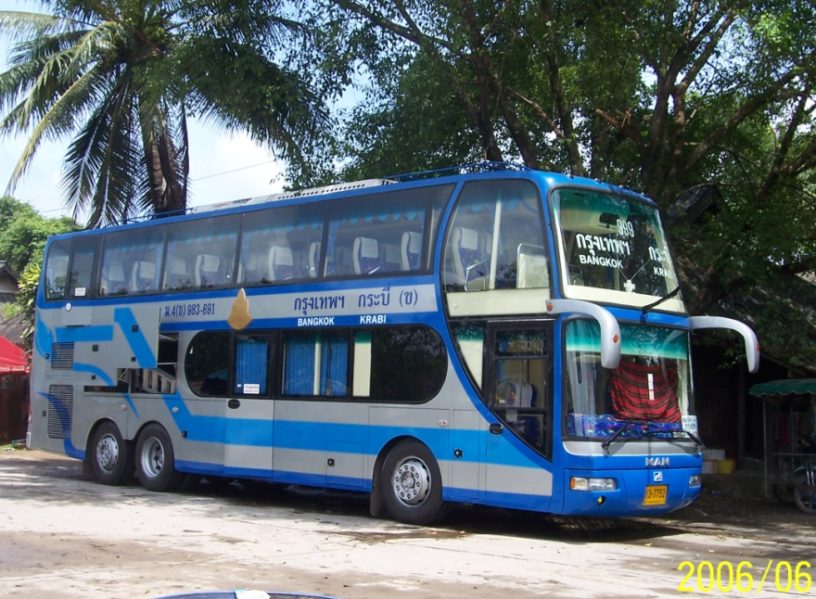 The Best Ways to Travel from Bangkok to Chiang Mai 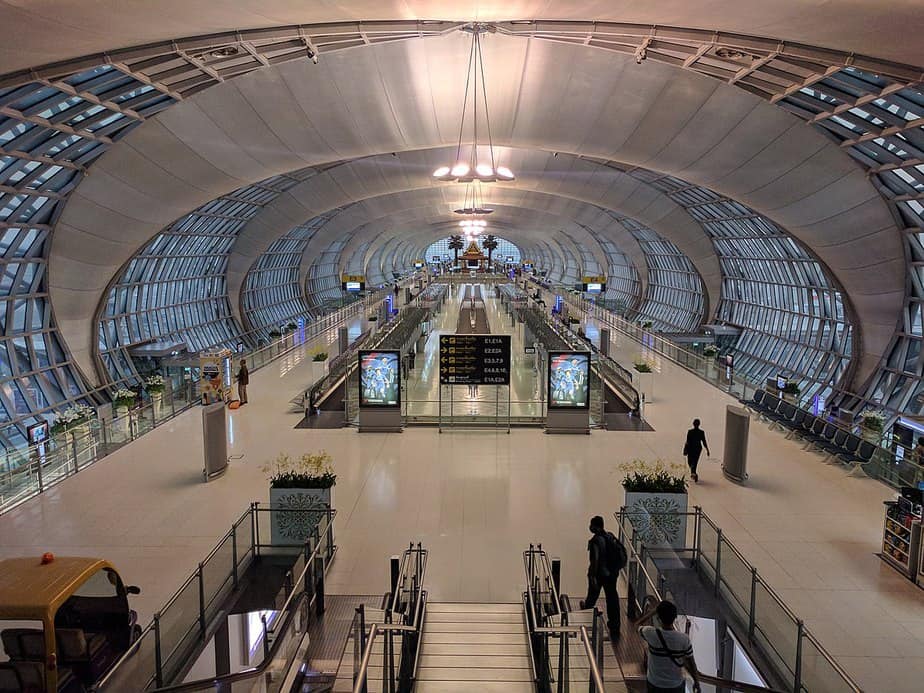 There are many reasons why Chiang Mai, the Northern capital of Thailand, is a popular alternative to the mass chaos of Bangkok. It may be the directly contrasting, wholly more natural environment and atmosphere, with its green, rolling hills and breathtaking mountain ranges which instil a sense of freedom and openness uncommon to Bangkok. Or it could be the starkly different angle on Thai life and culture that is represented by the Northern region.

Either way, many visitors to Thailand combine trips between the northern and central regions in order to get a more well-rounded experience throughout their holiday – but with Chiang Mai being around 700 km north of the nation’s capital, it may just be worth any discerning traveller taking the time to consider what the finer points are in terms of the options available for the long trip northward, and then deciding which one is most suited to their requirements and budget.

Thailand has many underlying facets to its culture, and the Northern region is renowned for being the focal point of the ancient Lanna Kingdom and lore. This gives it a somewhat unique feel unlike any of the regions in the country, and this is represented in a specific style that is still very much in evidence today in the temples, food, art, handicrafts and lifestyle, to name but a few of the well-known features of Chiang Mai.

Chiang Mai is also somewhat more ‘user-friendly’ than Bangkok in many ways, offering a more diverse spectrum of experiences to a wider range of visitor. This is obviously largely due to the open expanse and natural surroundings of the region which provide a stark contrast to the concrete jungle that is Bangkok, but the people in the north are also renowned for being more friendly and accommodating than their city-dwelling cousins.

Although Bangkok has some amazing temples, the 500-plus on offer in Chiang Mai is set among stunning outdoor backdrops, and life here moves at a noticeably much slower pace than in the seething, concrete capital city.

Anyone considering a tour of the different regions in the country of Thailand might welcome the fact that Chiang Mai is a great place to visit after spending time in Bangkok (which can prove a little much for some people after a time) and the peaceful, natural environment, combined with the somewhat less stern-seeming approach to life of the people in the north in general, can go some way towards soothing shattered nerves after the assault on the senses that is Bangkok.

The seasonal variations in the north in terms of temperature, humidity and rainfall will differ from those in the central region. This is particularly apparent from the fact that the rainy season comes a couple of months later on in the north (around July).

Temperatures will also tend to be somewhat lower in general than in the dense, concrete jungle of Bangkok, which is at its most humid just before the start of the rainy season in April. The difference is most obvious in the typically cooler period towards the end of the year when many Thais head northward seeking out the ‘cold’ weather. Giving them a much-needed chance to don coats and hats that many Westerners from much colder climes often find amusing.

Having said that, there is indeed a noticeable difference in temperature, and this is especially obvious at night for those just travelling up from the city who have gotten used to tropical temperatures.  So anyone planning on making that trip might find it an idea to pack a couple of sweaters and even a jacket if they are heading up to the north anytime between mid-November and late January.

It is also worth noting that the WORST time to visit Chiang Mai is during the crop-burning season which is between mid-February and the beginning of April, when the air is likely to be on the more polluted side and the skies are somewhat hazy. 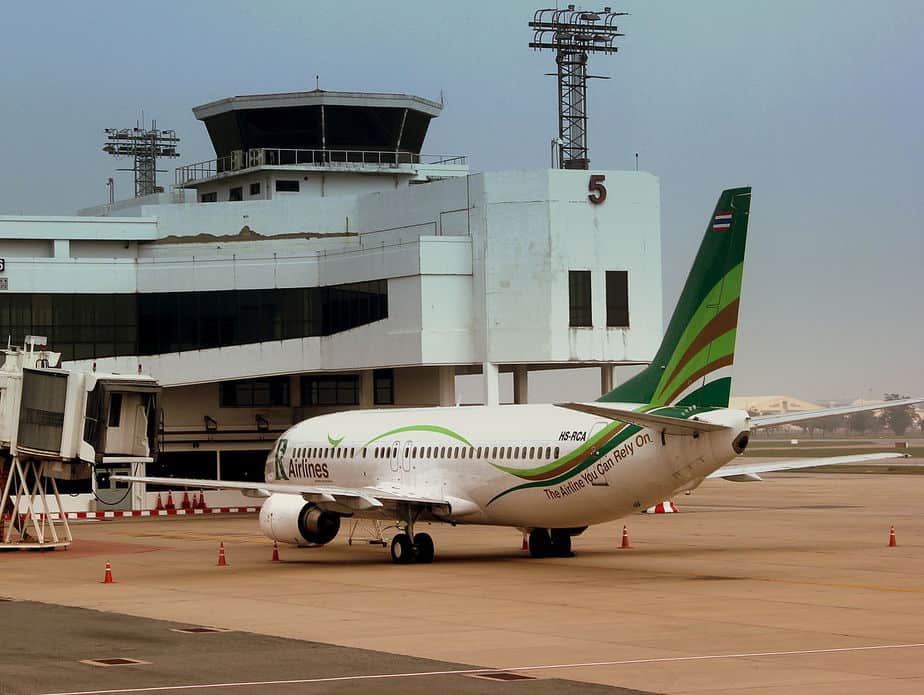 Taking a domestic flight from Bangkok to Chiang Mai is undoubtedly the quickest and safest route. The flight takes less than a couple of hours, and both Suvarnabhumi, the Thai international airport, and Don Mueng – the much smaller domestic option – have a wide range of flights to the northern regions running on a daily basis. These flights can be relatively inexpensive depending on when they are booked, and the airline being used.

The ‘low-cost’ or budget local airlines are commonly-used by locals for the shorter, domestic trips, with flights ranging somewhere between 1000 and 5000 baht, depending on the time of year and availability. Check and compare the information of some of the airlines, both budget and otherwise HERE: 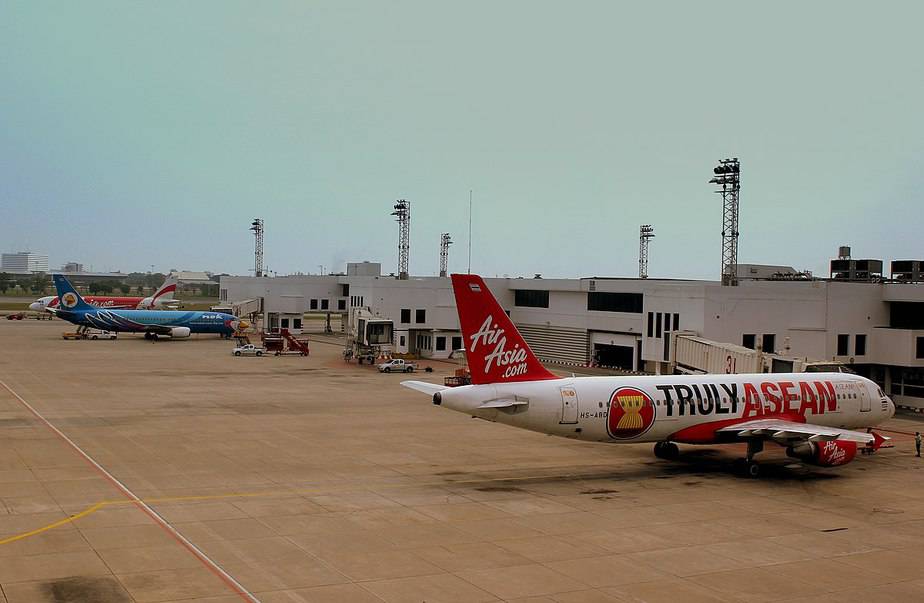 The trains in Thailand, it should be noted, are still somewhat antiquated compared to those in more developed countries. This means that train journeys, on the whole, tend to be somewhat long, arduous, and a tad uncomfortable – although this is obviously reflected in the prices of tickets, some of which may seem incredibly low when comparing them to flights.

The train journey to Chiang Mai does indeed fall into the ‘long, arduous’ category, being somewhere in the region of 12 to 16 hours. That said, many seasoned travellers may find it more enjoyable than flying (although enjoyable and comfortable are not necessarily the same thing!), or perhaps those on a lower budget – certainly the journey by train will present more chance to take in the views of the land across the country. 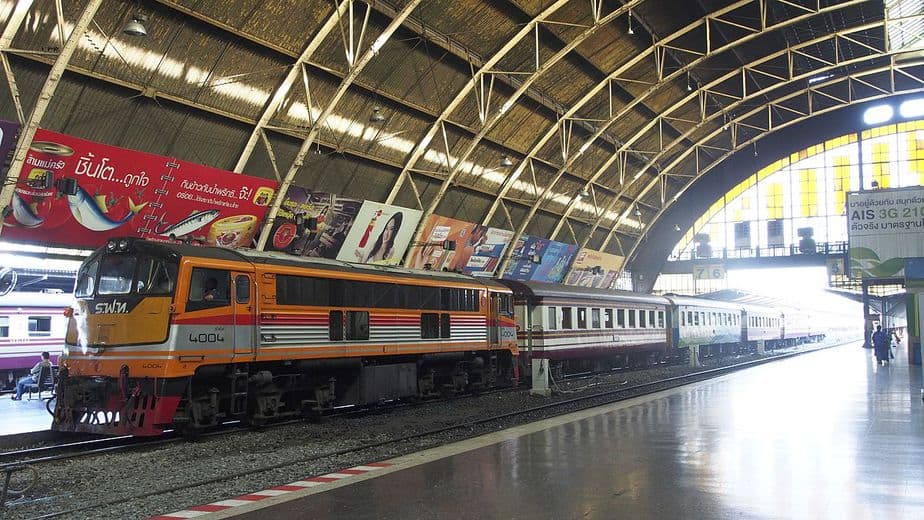 There are five direct trains per day leaving Bangkok from Hua Lamphong Station, with some of them being faster than others, and overnight options also being available. The prices for tickets will vary according to the duration of the journey, the class of the ticket, and the times and dates selected for the trip, but tend to be somewhere between 600 baht and 1500 baht. (For some reason purchasing the tickets online is more expensive than getting them at the station.) Bicycles can also be taken on some but not all trains, so it is best to check in advance the full details of the trip HERE: 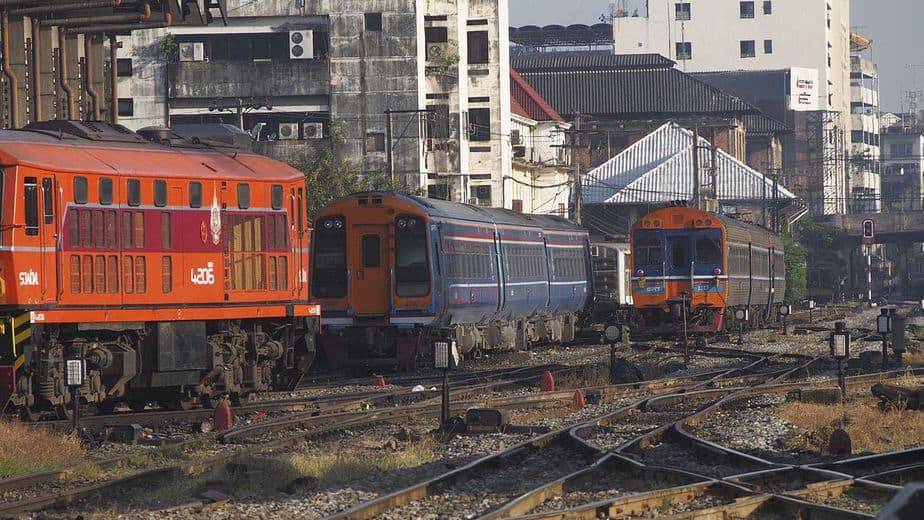 The bus option for a long road trip may be comparable to the train journey in some ways, depending on the type of bus selected. Typically, a bus from Bangkok will take at least 12 hours to reach Chiang Mai, and for this reason alone it is recommended that anyone choosing to go by this method at least consider some of the VIP options available.

Northern-bound bus routes from Bangkok run from Mo Chit Station – not to be confused with the BTS stop of the same name, although they are quite close by proximity. 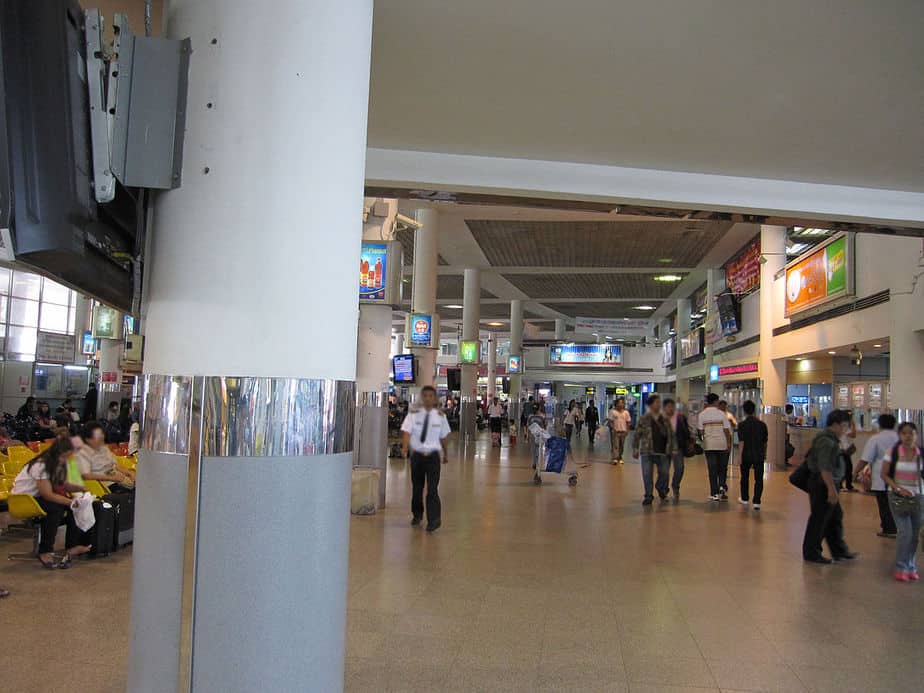 Image by Horiuchi sourced from wikimediacommons.com

The absolute cheapest option of travelling to Chiang Mai from Bangkok is by second-class Government bus. These tickets cost around 450 baht, and provide a trip that is long, uncomfortable, with no air-conditioning, and also often with no guarantee of a seat. It must be pointed out here that this option really is not recommended, even for the well-wishing seasoned ‘shoestring traveller’.

Slightly better services are offered on a first-class Government bus, the tickets of which tend to be around 100-150 baht more expensive than the cheaper option and may even have air-conditioning and toilets, although this is Thailand and there are never any guarantees on both being included.

For anyone really insisting on the bus route, the infinitely more comfortable VIP ‘coach’ option is undoubtedly the best. These coaches are privately-owned and are often two-tier affairs with air-conditioning and reclining seats, and maybe even two toilets. Pillows, blankets, and snacks are usually supplied as part of the package, and the price of the ticket is likely to be double that of the Government-run bus options. Many people take these buses overnight as sleeping is made much easier by the seats and legroom. 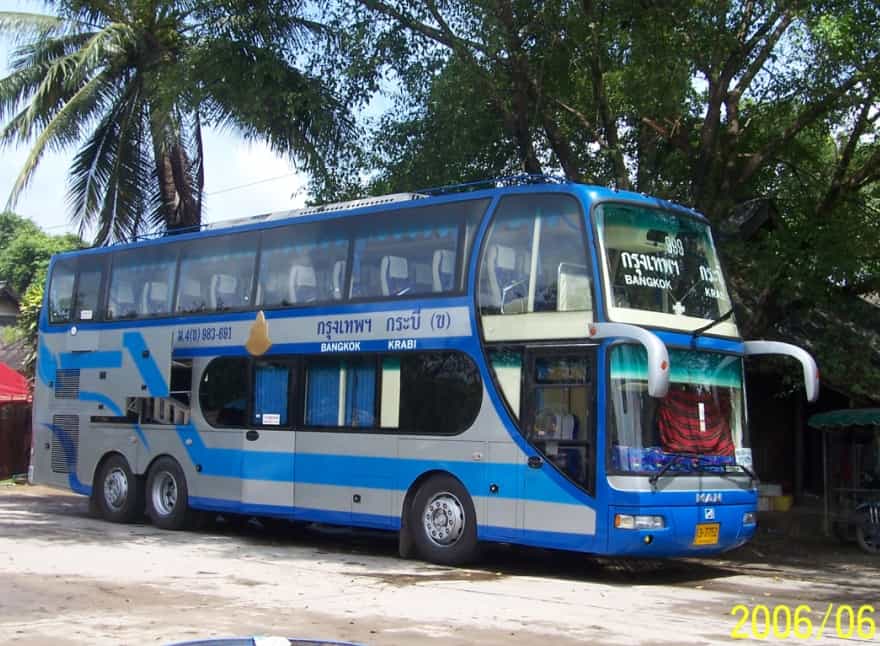 It is worth checking all options for privately-owned coach options beforehand, and it is also likely to be much cheaper when booking directly with the operator themselves rather than through one of the many ‘tour operators’ or travel agencies commonly found in the tourist areas of Bangkok such as Silom, Sukhumvit and Khaosan Road which obviously earn their commission by acting as intermediaries between operators and travellers.

It should also be noted that bus terminals from the city in Thailand are pretty much no-go areas for tourists during Thai holiday periods when throngs of people are homeward-bound and the sheer volume of people in these terminals can be a somewhat disconcerting affair.

For more information on bus and coach booking and prices, check HERE: