The 7 Most Popular Dishes from the South of Thailand 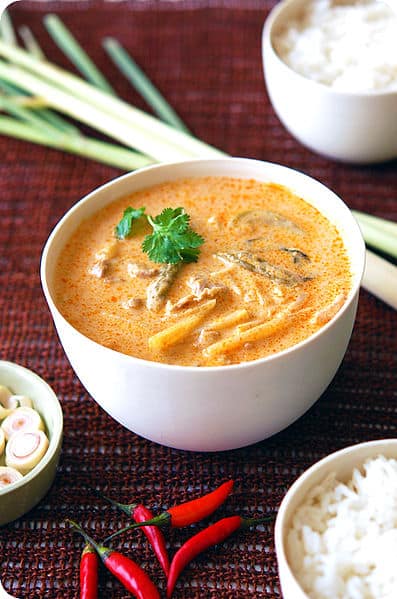 The 7 Most Popular Dishes from the South of Thailand

Whether you have actually been to the tropical SE Asian country or you are just a frequent visitor to the local Thai restaurant, you might have realised the term ‘Thai food’ is somewhat general.

Most people have an idea that many of the dishes are rice-based.

It’s also quite true that a fair few of the dishes on the menu of a Thai restaurant are likely to be somewhat on the spicy side of the taste-o-meter.

However, there are distinct differences between the dishes from the different regions of the country. Some of them are admittedly subtle, while others are blatantly obvious. And this makes the cuisine of Thailand fairly wide-ranging. 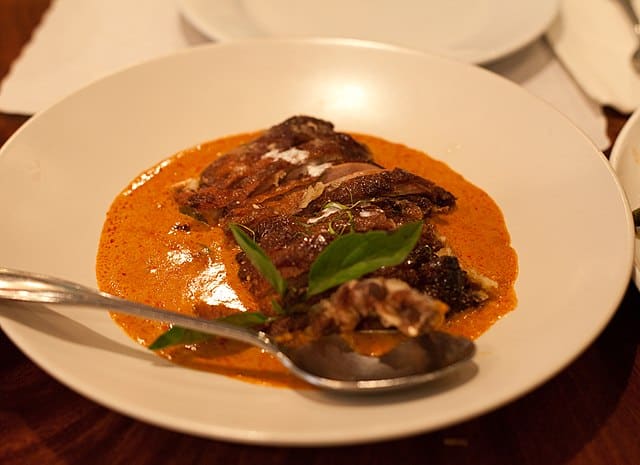 Sometimes it is just about the colour of a particular dish – an indicator of regional preferences or the availability of particular ingredients in a specific region.

If you check out one of our previous posts about Thai curries, you will know that the majority are made with a base of something called ‘prik gaeng’, the Thai chili paste staple that serves as one of the main base ingredients of Thai curries, along with a fair few other  dishes.

The subtle ingredients of the chili pastes, which vary from region to region, often give them a different colour and taste (hence green curry, yellow curry, red curry and such like). 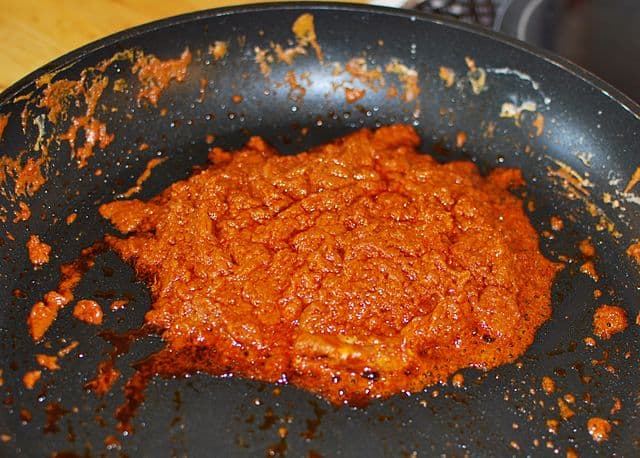 The variations of the chili paste can and do make distinct differences to the tastes inherent I the food from various regions of the country. They come largely from the availability and the preference of ingredients from that particular region. They also cause it to differ in degrees of spicy-ness according to the type of chilies and other ingredients used.

And talking of chilies and spicy-ness — along with that originating from the Northeast, Southern Thai cuisine is also notoriously hot and spicy, though is does vary significantly in terms of ingredients.

Some of the best dishes from the south of Thailand are possibly not for the faint-hearted, but if you fancy your chances then you’ll find the best of them to be tasteful, varied, and exotic, with their diverse mixes of herbs, vegetables and other ingredients.

Southern Thai dishes are marked by a natural abundance of herbs, local provisions of coconut cream and the ever present rich spice blends of turmeric, galangal, garlic, lemongrass and kaffir lime leaves.

The food from the South is also influenced to some degree by the flavours and spices of Indonesian and Malaysian cuisine, and some of it resembles Indian food (with a Thai slant), due to the ingredients used. And, as the South is a largely coastal region, expect there to be plenty of fish dishes in the local cuisine.

So let’s take a closer look at some of the most popular dishes from the South of Thailand. 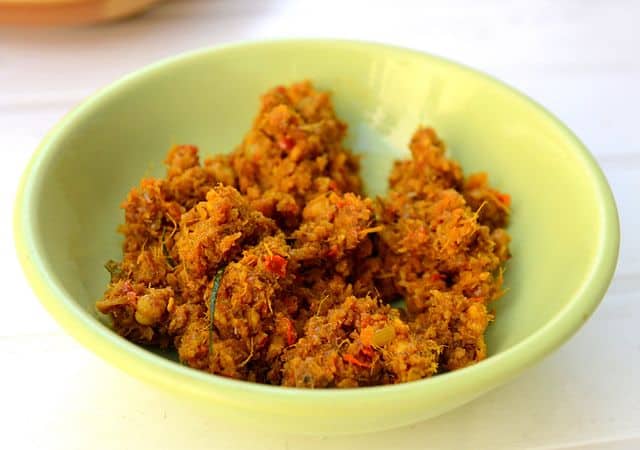 Image by Takeaway from wikimedia commons

Kua kling is a southern Thai curry of the ‘dry’ variety. It is commonly made with pork, although sometimes with beef or chicken. Unlike many other Thai curries which use water or coconut milk, the dry meat in this dish absorbs a high concentration of spice, which adds a real bite.

The meat is marinated in curry paste, chilies, garlic and shaved lemongrass before being sprinkled with a handful of thinly sliced kaffir lime leaves, and a few pepper corns. Each bite is has a pretty spicy kick that creeps up on you, with hint of lime. 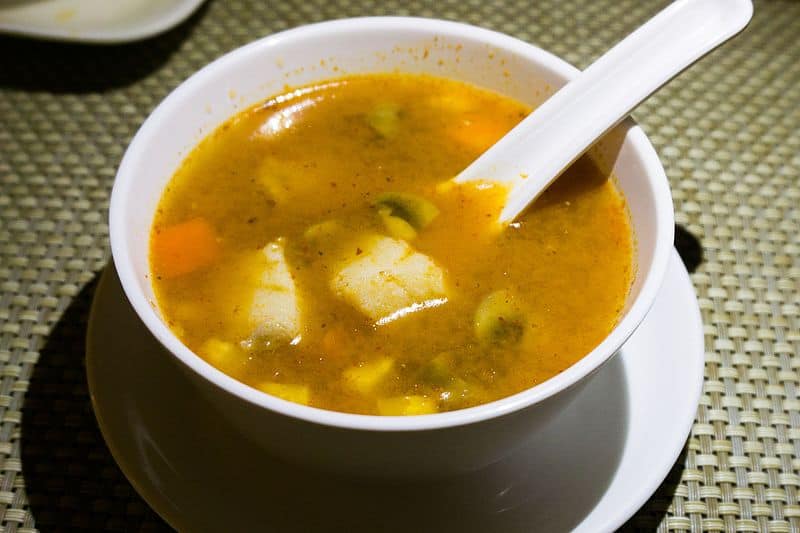 This is an excellent example of a Thai ‘curry’ that is actually more of a soup, as there is no coconut milk added.

The chili-paste base paste contains just five ingredients, yet Gaeng Som can still be a pretty spicy affair, depending on who makes it. Any of the southern-style curries that are water-based can be fiery options in some cases.

The Gaeng Som chili paste is comprised of dried red chilies, shallots, sea salt, finger root ginger, and shrimp paste. The sour element of the dish comes from tamarind, and there is some kind of tropical fruit like pineapple to add to that.

This Southern Thai curry is typically made with fish or shrimp and whichever local vegetables considered suitable are available, which will obviously be southern-influenced.

Gaeng Som is one of those dishes from the south that is popular in central Thailand, and is usually to be found nationwide as standard Thai cuisine. 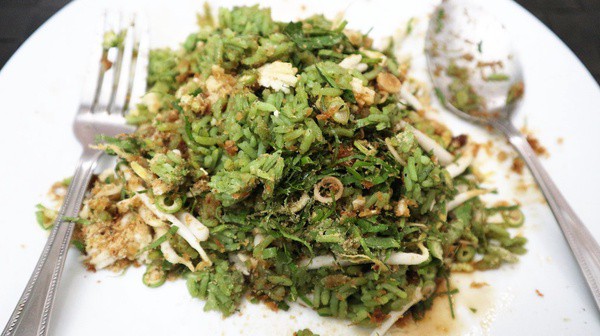 Khao yam (which translates as ‘rice salad’) is a fragrant rice salad comprising various degrees of grated coconut, dry shredded shrimp and a host of herbs.

The herbs add a tangy bite to the salad, and come by way of finely-sliced kaffir lime leaves, lemongrass, penny wort and turmeric leaves. It is all is mixed together with some form of rice and dressed with a slightly sweet fish sauce.

This is actually a popular option with raw vegans or vegetarians if they hold the fish sauce. 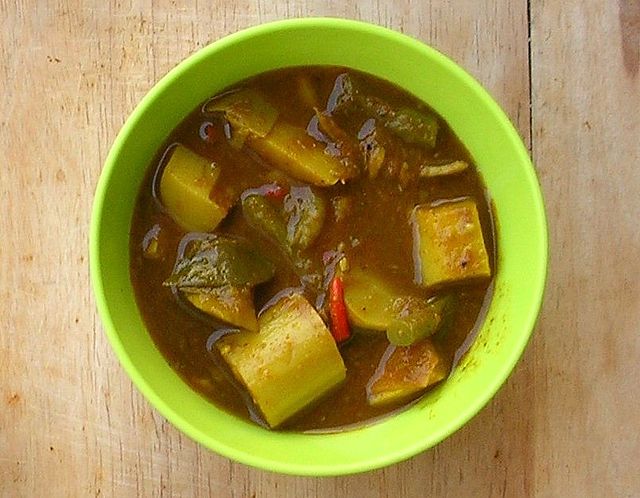 Typical of most southern Thai food, this one has plenty of dried chilies, garlic, red onions, lemongrass, kaffir lime leaves, galangal and turmeric. Needless to say, Gaeng Tai Plaa is another one packs something of a punch in spice terms.

It’s actually more like a kind of hot and spicy thick fish soup, with layers of complex flavour. The ingredients include a mix of some kind of fish (look out for the bones) fermented shrimp paste, eggplant, pumpkin, string beans and bamboo shoots depending on availability. 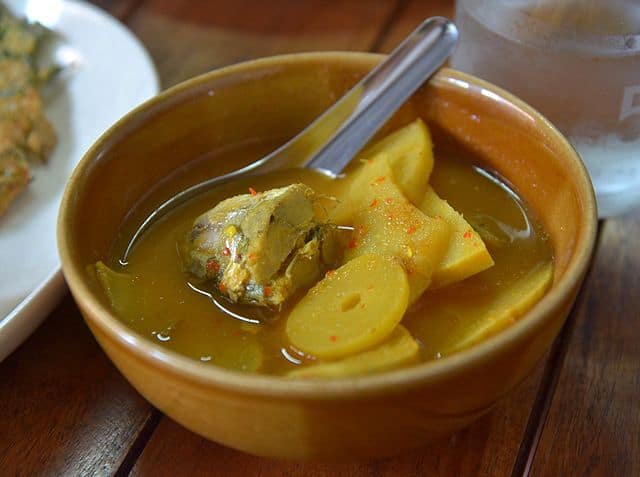 Image by takeaway from wikimedia commons

The Thai word ‘luang’ translates as yellow – as in the colour. So here we have a ‘yellow curry’ that is sometimes confused with other dishes (of the same colour) that actually have different names.

As we said before, the word ‘gaeng’ is a somewhat generic term that covers a variety of soups and curries in Thai cuisine. Some of these dishes may use coconut milk, which tends to make them closer to what many people might think of as a curry.

Others, like the one we have here, are more water-based, and hence of more of a soup-like consistency.

But if you do happen to try ‘Gaeng Luang’, you’ll find that it is no less spicy than anything you might have previously considered as a curry.

Because of some of the similar ingredients to Geang Som, this dish is often considered as a much spicier version of that one, which comes from the same region.

The yellowish hue of Gaeng Luang comes from the base ingredients of the curry paste and turmeric.

Like many southern dishes, this one is commonly prepared with some type of fish. Southern dishes tend to use more fish from the sea than Northeast cuisine, mainly due to geographical location.

So you might find this usually comes with seabass, mackerel, or other seafood options according to their availability. This is exotic Thai cuisine that often contains ingredients such as green papaya, lotus stems, bamboo shoots, and various other local delicacies. 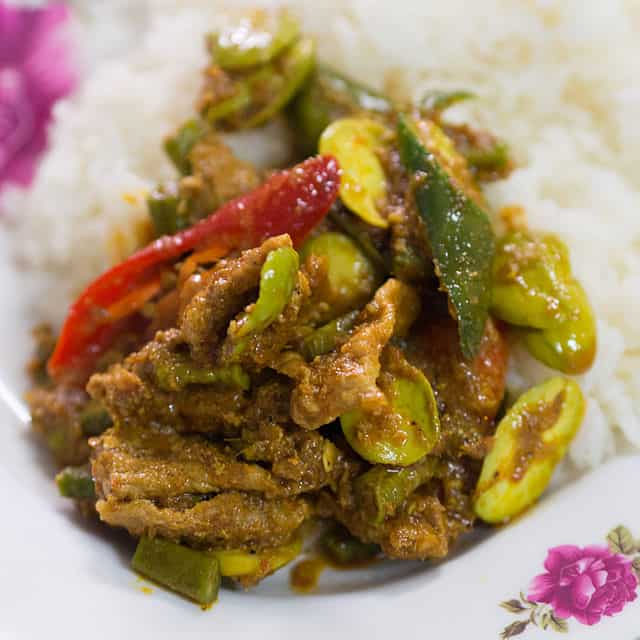 Image by takeaway from wikimedia commons

The somewhat bizarre green beans prominent in the South – known as Sataw – actually translate as ‘stink beans’ and feature in a variety of dishes from the region.

This is a kind of bean that looks a little like a broad bean, but it is much greener and comes from a pod. The ingredient features prominently in many dishes on the menu of any southern-Thai restaurant.

It gets its name from the fact that, well — you may stink after eating it! However, the upside id that the bean is said to be extremely beneficial for people’s health curing a variety of disorders ranging from blood pressure to hangovers!

In this dish, the crunchy and pungent green beans are stir-fried with either fresh prawns or pork, and shrimp paste. The trademark southern flavours that are primarily sour and spicy are still in full effect. 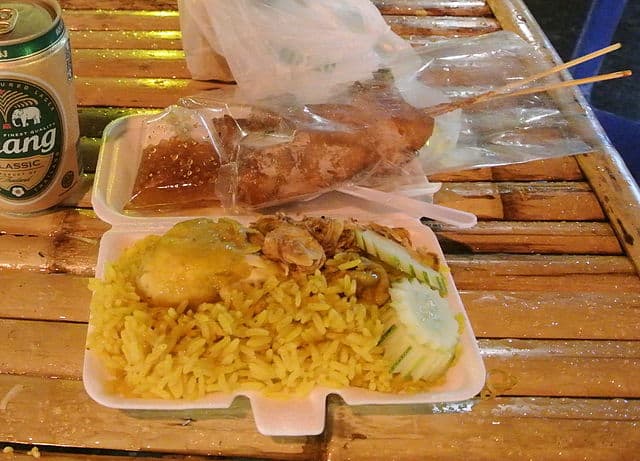 Khao Mok Gai is the only dish in this whole list that doesn’t contain too much in the way of fiery spices and other strong flavours. It is basically chicken & rice with a hint of turmeric, which gives it the yellow hue.

The fragrant yellow rice is topped with steamed chicken and sprinkled with crispy fried shallots. It is usually accompanied with pieces sliced cucumbers and a unique sweet, green chili dipping sauce. The flavours all combine perfectly, along with the small bowl of soup usually served with this dish.

The turmeric, along with a few other roasted herbs and spices (hence biriyani) make sure that the dish as a whole is packed with an intense, pungent and tasty flavour, regardless of the lack of strong tastes usually found in anything from the South. Biryani is actually the term used for the method of combining the rice and meat together with the unique blend of herbs and spices. Hence, the Thai name Kao (rice) Mok (bury) Gai (chicken).

This popular dish from the southern regions of Thailand is also a favourite takeaway item. It can be located fairly easily on the street food vendors or small restaurants, and is sometimes found being sold alongside the other popular Thai chicken & rice dish ‘Khao Mun Gai’ (that of Haianese origin).