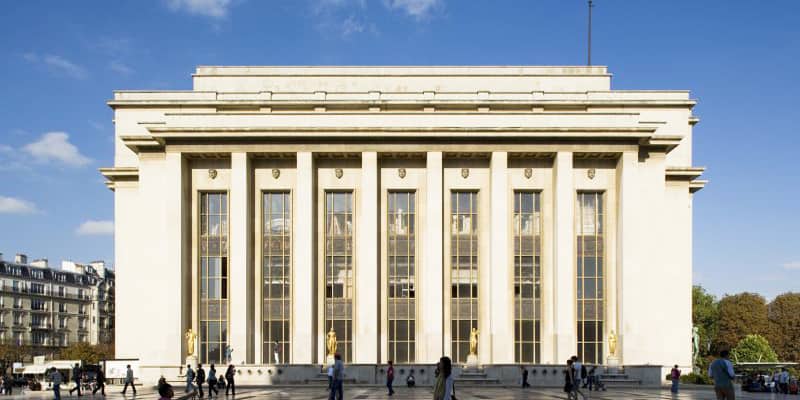 After the end of World War I, the urge for modernity and evolution in the European population resulted in a new architectural style, Art Deco in Paris. 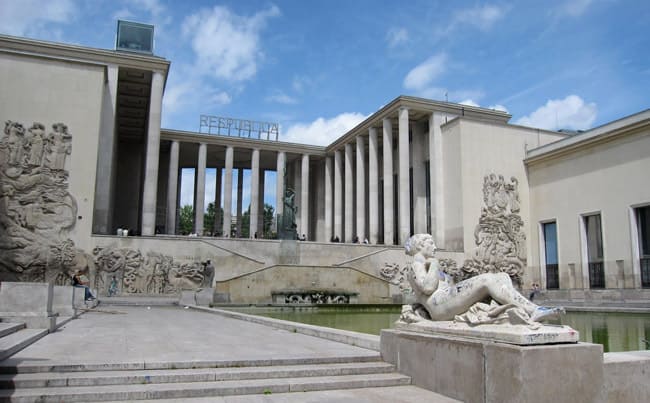 Opposite to the popular Art Nouveau style, it was inspired mostly by cubism but and also by neoclassicism, and therefore turned away from the curves to favour geometrical, symmetrical and angular shapes. You know how we he Parisians are, Parisians hated it, but it’s a different story now… You can still find in Paris some remains of that time, and architectural treasures.

The Palais de Tokyo (left) and the Palais de Chaillot (right), in the 16th district of Paris

If you are wandering around the Trocadero (after climbing up the Eiffel tower, you might come across two of these buildings. On the side of the Esplanade du Trocadero, you’ll notice a huge building, the Palais de Chaillot, whose east wing now hosts the Theatre de Chaillot.

If the building seems to be made in a sort of classical-ish style, walk inside the Theatre, and you will find an amazing Art Deco lobby from which you have an outstanding view of the Eiffel tower. The Palais de Tokyo, built in 1937, is a few meters away from the Trocadero. You can easily walk there or take the metro (Station: Alma Marceau).

Nowadays it hosts temporary exhibitions, but the building itself and the pond of water in front of it makes it worth seeing, believe me.

La Samaritaine (Metro Station: Pont Neuf), which used to be a huge department store right on the Right Bank of the Seine, is now closed, but remains one of the best example of Art Deco style in Paris. It was first built in Art Nouveau Style, but the extensions transformed it to make it look more modern. In a few years, it will host new shops, offices and a hotel. Just wait and see!

The Art Deco style also gave birth to the Grand Rex, a movie theater located in the 2nd district of Paris. It is a small version of the Radio City Music Hall in New York. It has the largest screen in France, but what makes it really special is the ambiance inside the rooms. They’re all made to recreate a special feeling, fantasized cities. The biggest room is supposed to give you a taste of the Art Deco trend on the French Riviera at the time. There’s also a night club there, and most movies are shown in their original versions! 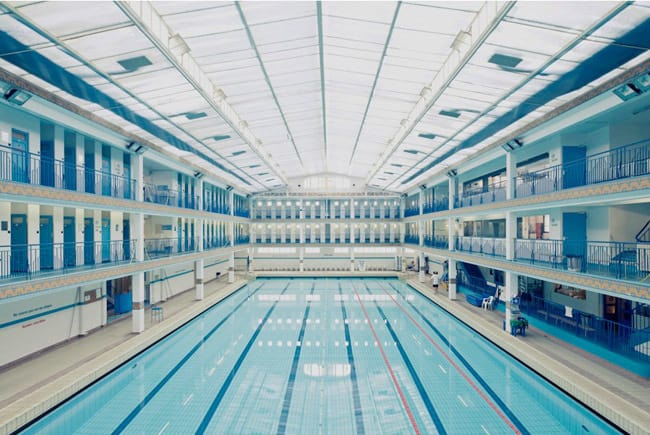 But if the weather is hot and you feel like being lazy in the water without missing out on the architectural gems of the capital, you can go to the Piscine Pontoise (Metro Station: Maubert Mutualité). It is very typical of the Art Deco style, with its two rows of mezzanines and locker rooms. As a Parisian, it’s my favorite spot to dive in the water! A beautiful place to relive the glorious days of the jazz age while swimming!

If you’d rather wander around gardens like a real Parisian, you can visit the Square René Le Gall (Metro Station: Place d’Italie), also called Gobelins Garden. It is a wonderful example of Art Deco transposed to gardens, with its obelisk in the middle, surrounded by geometrical squares of lawn.