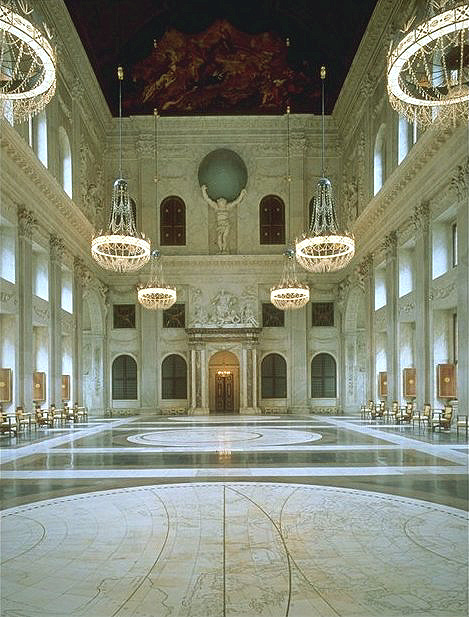 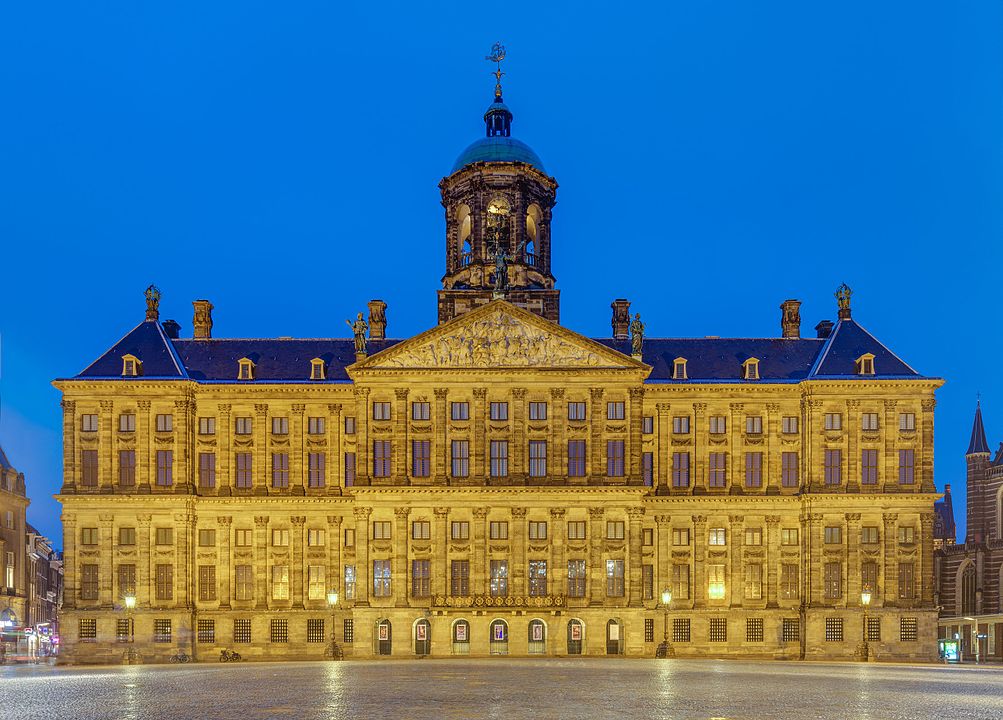 The Royal Palace of Amsterdam is one of the three palaces in the Netherlands which are at the disposal of the monarch by an act of parliament. It is situated on the west side of Dam Square in the centre of Amsterdam, opposite the war memorial and next to the Nieuwe Kerk.

Initially, it was a city hall during the Dutch Golden Age in the 17th century. It was then transformed into a Royal Palace. The Palace is open from Sunday to Saturday from 10 am and closes at 5 pm.

1. The Building was Transformed into a Royal Palace in the Early 19th Century

In 1588, the Dutch Republic existed until it was ended by the French victory in the Batavian Revolution of 1795. This turbulent period in European history, in 1789, was initiated by the French Revolution and resulted in the transition of power. This as well changed the goal of the Town Hall of Amsterdam back then.

2. It’s one of 3 Palace that can be Officially Used by the Dutch Monarch

The palace in Amsterdam is used for receptions such as New Year’s reception and welcoming guests during state visits. It also serves as the venue of royal award ceremonies such as the Erasmus Prize, The Royal Awards of Painting, The Silver Carnation, and The Prince Claus Award.

The Royal Palace of Amsterdam was designed in the typical Dutch Classicist Style and is assumed to be the most amazing building constructed during Dutch Golden Age. It is a type of Neoclassical architecture that didn’t feature all the bells and whistles of Baroque architecture but focused on the practical integration of all elements.

This style is as well referred to as classicist Baroque because it prospered during a period that Baroque architecture was predominant in other parts of Europe. Jacob Van Campen was the architect of the building from 1596-1657.

4. It Was Constructed For a Different Purpose in the 17th Century

It is interesting to know that the Royal Palace of Amsterdam was not constructed to serve as a Royal Palace in the 17th century. During Dutch Golden Age also known as The Dutch Miracle, Amsterdam was becoming both the economical and political heart of the Dutch Republic.

During this time the country was one of the most prosperous and advanced countries in the world. The previous Town Hall was a Gothic building constructed during the Middle Ages and didn’t suffice anymore. In 1648-1655, the town hall was turned in to palace.

5. Palace is Located in the Historical Heart of Amsterdam

The Royal Palace of Amsterdam is locally Known as Koninklijk Paleis van Amsterdan or Paleis Op de Dam. The name is a reference to the location of the palace. The palace faces the historic Dam Square, one of the most famous and valued Squares in the heart of the City. The section of the city is called the Binnenstad or Inner City.

6. King Louis I of Holland Transformed the Town Hall into Royal Palace

However, King Louis, I of Holland did not enjoy the Royal Palace for so long even after transforming it. He became the king in 1806 but abdicated shortly after on July 1, 1810. Napoleon had suggested that Louis should abdicate, indicating Louis’s inability to protect Holland. Louis refused the claim and declared the occupation of the kingdom by a French army unlawful. However, on July, 1,1810 Louis abdicated in favor of his second son, Napolean Louis Bonaparte.

7. Sculptures and Paintings Inspired by Romans and Greek

The Royal Palace is built in the Dutch Classicist style. The Palace is Lusciously decorated with sculptures and paintings about Roman and Greek mythology and biblical stories. The architect was inspired by the Roman empire and Greek architecture.

It took 60 years to complete interior design, after the official opening of the City Hall in 1655. The paintings were made by the most famous artists of those days: Rembrandt van Rijn, Govaert Flinck, and Ferdinand Bol. The Sculpture was done by Artus Quellinus an artist from Antwerp.

8. One Room was Used as Orphan Room

One of the rooms of the Amsterdam City Hall was the Orphan Room. The room was the office of a special commission that protected the interests of the orphaned children of Amsterdam. A caretaker was appointed to keep save the finances of the orphans.

Cornelis Holsteyn decorated the room with paintings. The painting portrays an old Greek story about the legendary lawmaker Lycurgus. Who became the king after his brother’s death (King of Sparta). The wife of his brother was left pregnant and she was ready to get rid of the baby if Lycurgus agrees to marry her. However, Lycurgus played along until the baby was born and then he protected the child. In the painting we see him holding out the baby to the public, calling it the new King.

9. Acted as a Justice Area

The Town Hall which was transformed into a Royal Palace acted as a Court of Justice. Criminals received their official death sentence during a special public ceremony. During Justice, the public could watch the scene through the barred windows.

In the cellars of the Royal Palace of Amsterdam,  there were ls with torture chambers and dungeons, here where suspects were questioned to confess. However, a criminal could only be sentenced if he/she has confessed and agreed to the act. The public execution took place on Dam Square after the sentence ceremony, usually by beheading but also hanging and strangling were possible.

It acted as a visitors and citizen hall. Visitors found the main hall the Citizen Hall the most impressive The doors to this hall were always open. People meet here for business meetings or relaxation.