A walk in La Villette 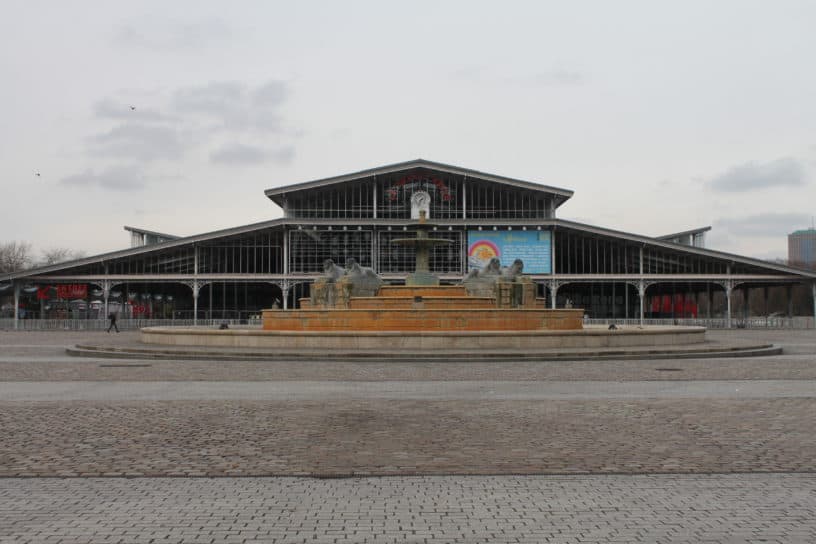 A Walk in La Villette 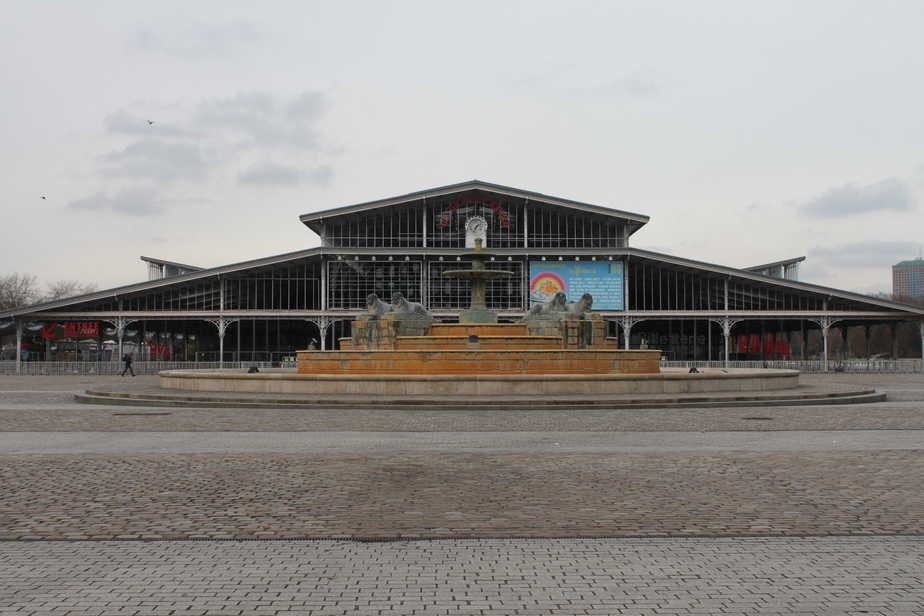 The main square, fountain and hall where many major events take place

Placed on the northern tip of the city, La Villette is Paris’s third largest park – spanning nearly 56 acres. Its contemporary, colorful buildings lend their space to a host of theaters, music venues, coffee shops, cinemas and museums. Due to its vast grass fields and quaint canals, La Villette is a hot spot for tourists and locals alike. There are an estimated 10 million visitors every year.

Throughout my life in Paris I have spent a great deal of time at La Villette. However, when I went back last week to take photos, it occurred to me that I had never visited during the winter months. I was struck by the stark contrast. The grass was covered in melting slush from the night before, the outdoor cafes were boarded up and locked, the philharmonic was teeming with elementary school children and the banks of the canal were deserted of all day drinkers.

Do not get me wrong – La Villette is worth visiting any time of the year – but it lacked the throbbing movement that it possesses during the long, European summer evenings. That being said, there are still scores of activities to take part in, whatever season of the year.

Have a drink next to the canal or on the lawn 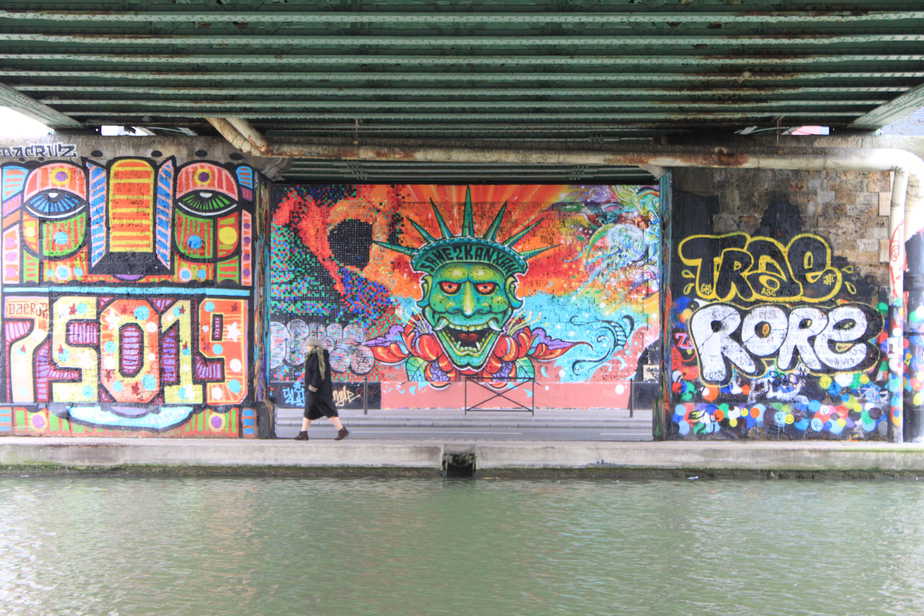 Graffiti on the side of the canal where, in the summer time, many people sit and drink

Drinking is by far La Villette’s most popular activity. The little human made canal makes for an ideal spot to sit, sip and bask in the glow of the afternoon sun. This tends to be an activity dominated by locals but every once in a while you can catch a glimpse of a tourist thrown into the mix. Fun fact, you can tell the tourists by the people who took the time to bring wine glasses.

The park is also populated with vibrant, green lawns that are found on both sides of the canal. In summer these lawns are littered with people playing music, eating and kicking a soccer ball, preserved within their clouds of sound and cigarette smoke.

In my opinion La Villette is one of the best places to go for a picnic in the open air of Paris. This park is vast and open and therefore feels removed from the normal, fast paced atmosphere of Paris. If you have a chance – weather permitting – head out to La Villette with picnic in hand.

Take a walk through the gardens 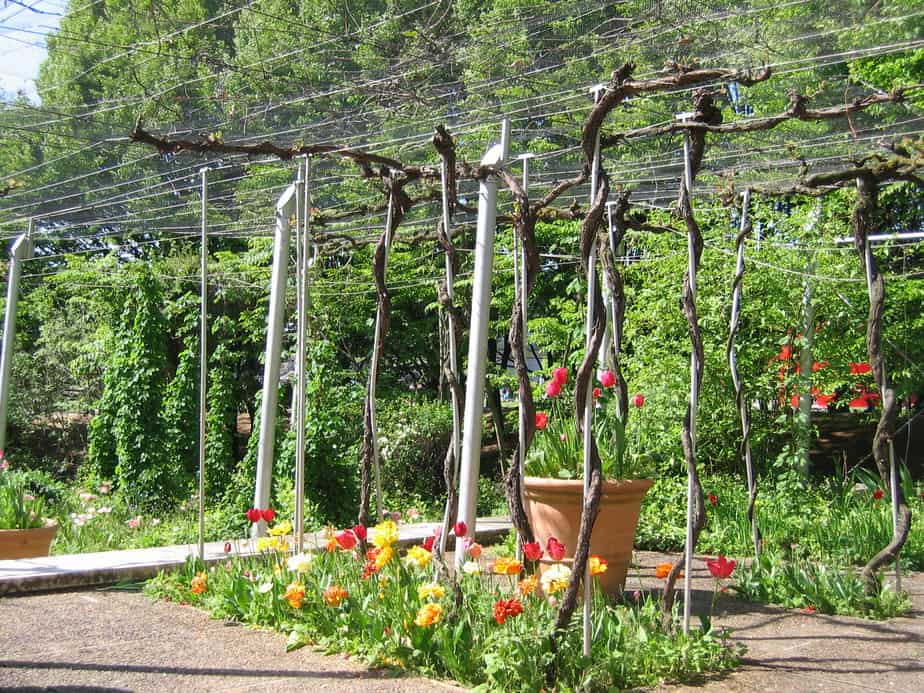 Along with the occasional dotting of lawns, there are also playgrounds and gardens inside the park. In total, there are ten different parks, all with different themes and styles of architecture.

One of the most visually demanding is called the Jardin du Dragon, named after the massive, interactive sculpture of a dragon. I say “interactive” because of the 80 ft slide pertruding out from the dragon’s mouth that was intended for children to play on. Each garden was constructed with a different purpose in mind: some for open interaction and others for mere curiosity and relaxation. 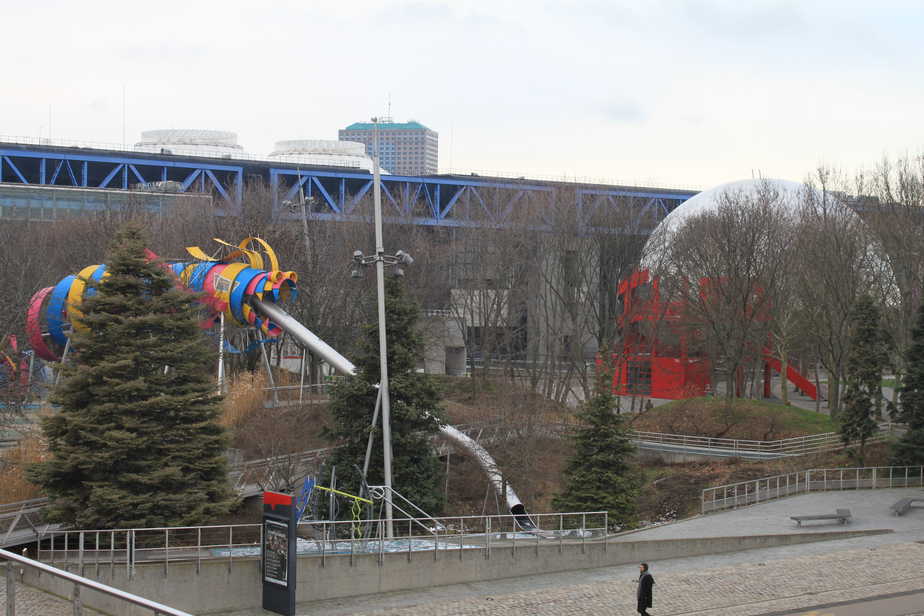 The Jardin de la Treille is one of the most actetically beautiful gardens in La Villette. There are striking flowers that rest underneath the vine covered trellis, and the faint sound of the 90 different fountains comes chittering through the green growth.

The Jardin du Dragon and the Jardin de la Treille are two of the more well known gardens but they are by no means the only ones worth seeing. My advise: take the time to slowly meander through all the gardens and enjoy the nature within the city walls. 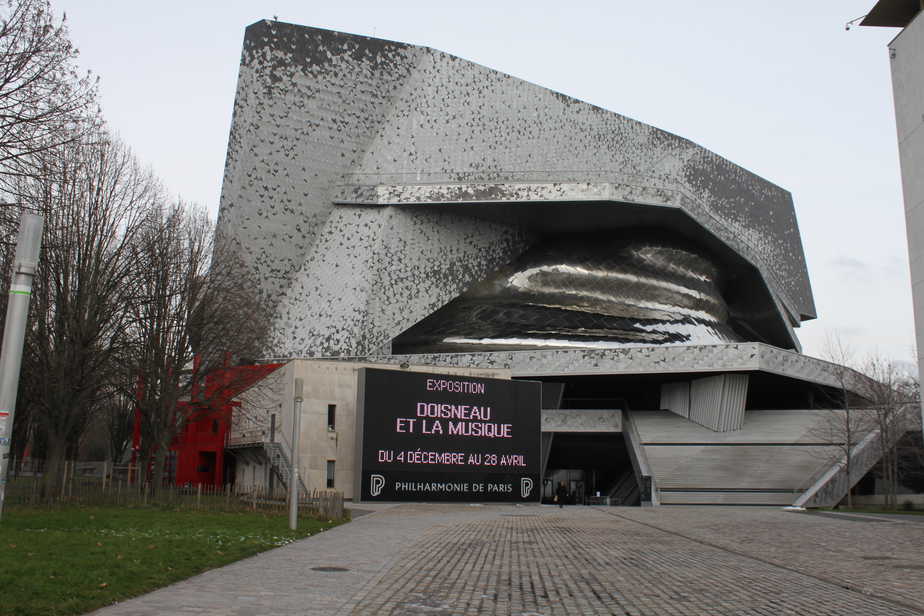 The Philharmonie de Paris (which really deserves an article of its own) is perhaps one of the most interesting buildings in Paris. Its exterior resembles a snake wrapping and squeezing itself around the walls of the impressive structure. Each “scale” has the design of feathers and are interwoven together to create a breathtaking, silver climax.

Inside the Philharmonie de Paris are concert halls, restaurants, exhibitions and practice rooms. The largest concert hall has 2,400 seats; I have been told it is magnificent ( I have only seen the outside).

There are floating balconies that surround the main stage as well as floor level, circular seating. This is supposed to give off a feeling of intimacy between the performer and the audience. If you ever get a chance to go, let me know if it works. 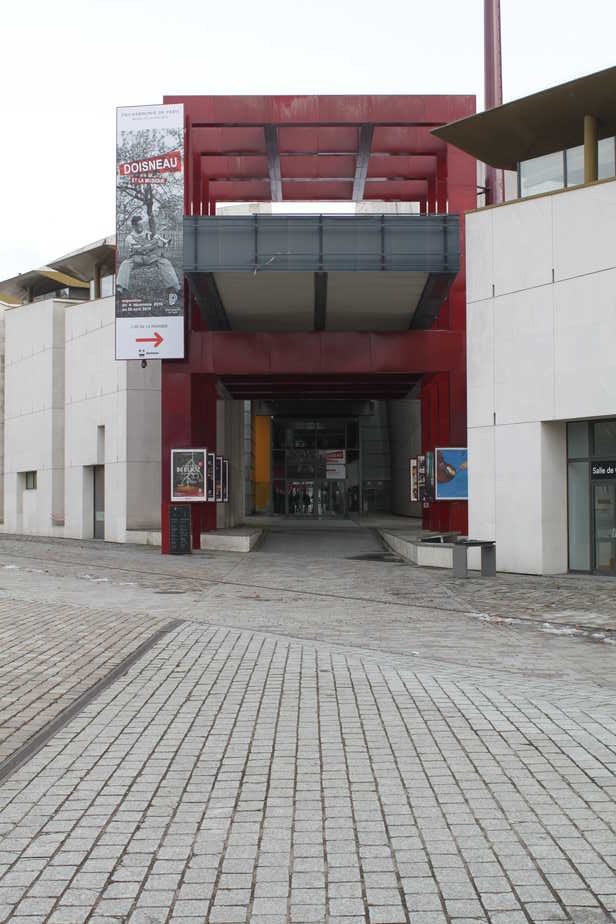 Entrance to the museum of musical instruments

Aside from the musical performance, there is also a musical museum set aside from the main building. Inside are exhibitions on the history of musical instruments and the progression on music throughout time.

Visiting the Philharmonie de Paris is an activity that promises to be inspiring no matter what season. I would urge everyone to go see it. Watch out for the snake, though. 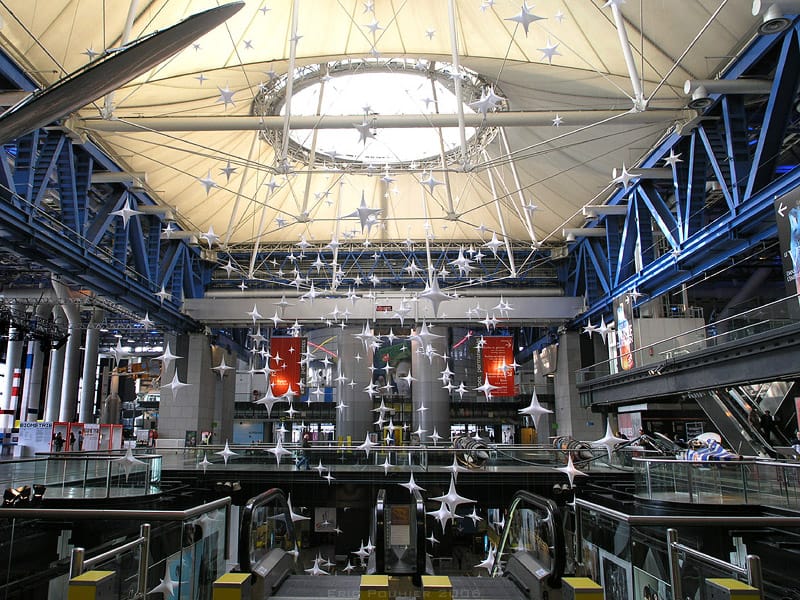 The Cité des Sciences et de l’industrie is hard to miss. Outside the huge glass building sits a massive reflective ball. It is surrounded by water and arching bridges and is placed right next to one of the extensive green lawns. 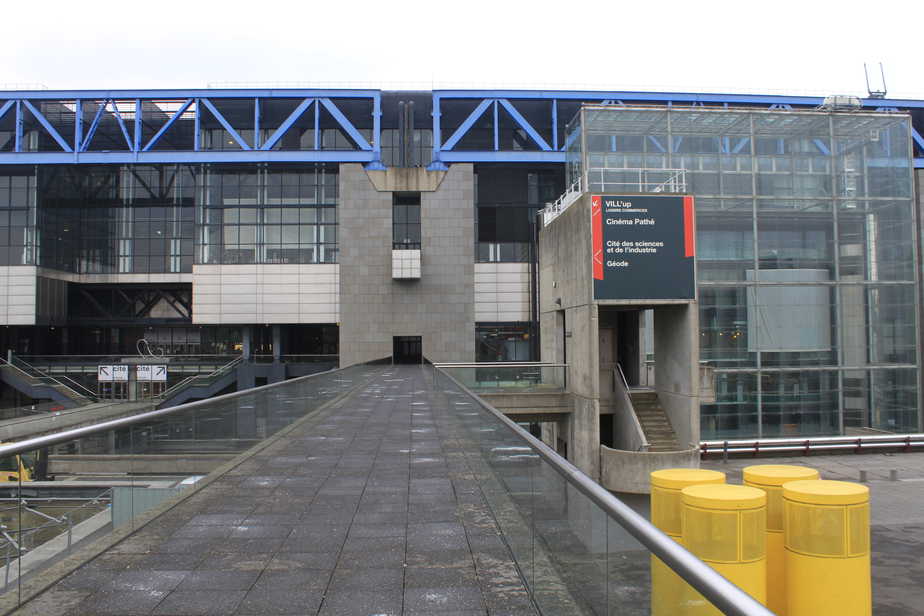 The tickets for the museum cost twelve euros and give you access to everything taking place inside. The museum is interactive, making it a perfect place for both kids and adults. There is a large portion of the museum dedicated to kids where children can learn about science through experimentation and observation. 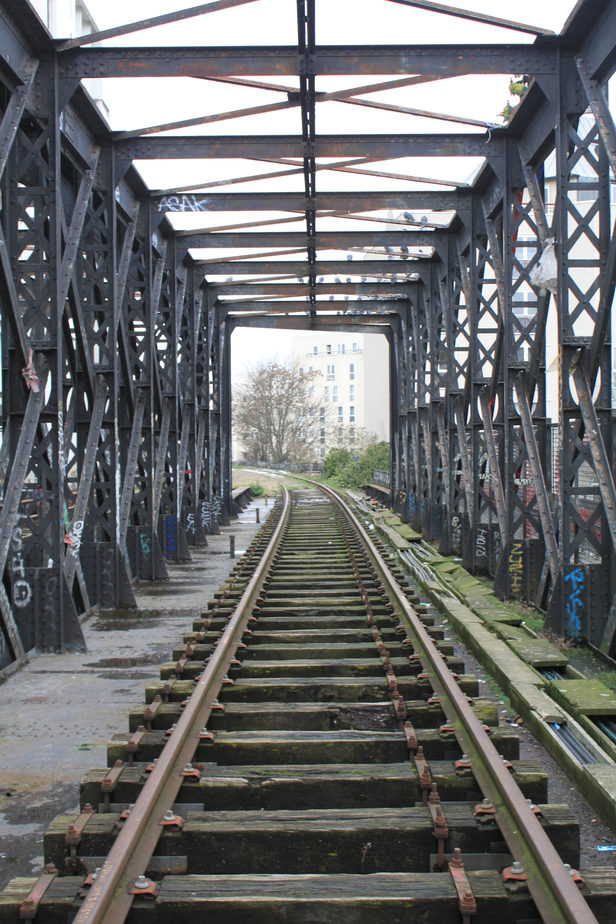 Some of the abandoned rail-road tracks near La Villette

We have already written articles on Le Petit Ceinture (the little belt) but it seemed fitting to mention seeing as it runs alongside La Villette.

Le Petit Ceinture was once a railroad that circled the perimeter of the city. After is necessity had been used up, it was left to its own devices and thus fell into ruin.

Parts of these tracks are still remaining, although their current condition is slightly questionable. At the bottom of La Villette, these old rails can be seen crossing over the canals alongside the walking bridges.

There are ways of accessing Le Petit Ceinture, but remember that it is illegal and can be dangerous. I have visited parts of the tracks to the south but, until last week, I had never visited the ones to the north. 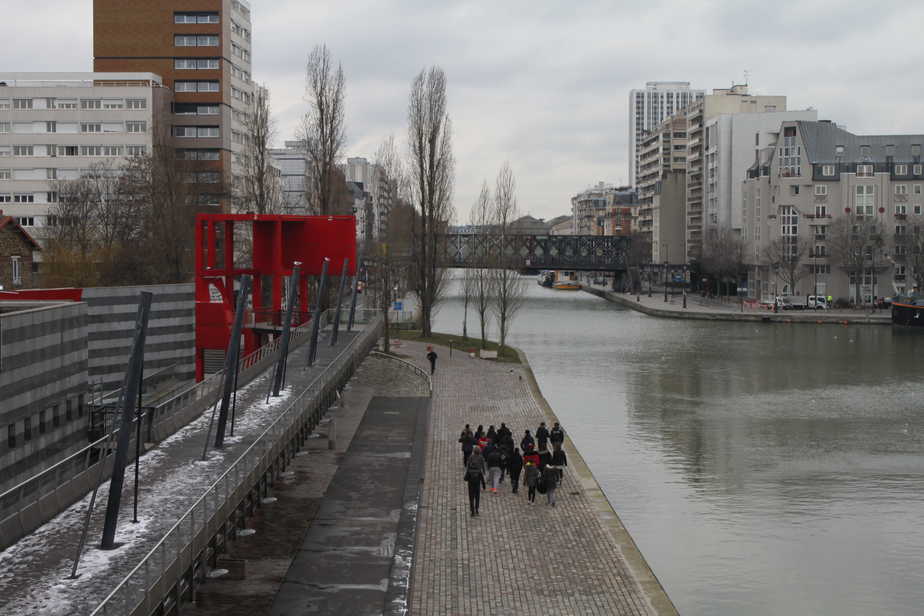 I found a spot that seemed easy to hop over and found myself on an old decaying bridge. The bridge seemed fine and my crossing was easy enough. I was eventually forced to turn around due to the questionable state of some of the other passages.

It was only when I had to return, and once again traverse the bridge, that I realized I was playing with fire (in this case water). At first glance, I had failed to see the places underneath the large wooden steps where years of rain had rusted away the metal, creating large gaping holes where water could be seen rushing below.

At other places, I noticed that the metal was so thin that if I was to take a wrong step I would have quickly broke through the floor and found myself, quite unhappily, swimming (or sinking) in the trash filled muck of the Parisian canals. I would suggest sticking to the gardens.

Catch a play or a drink at the Théâtre Paris-Villette 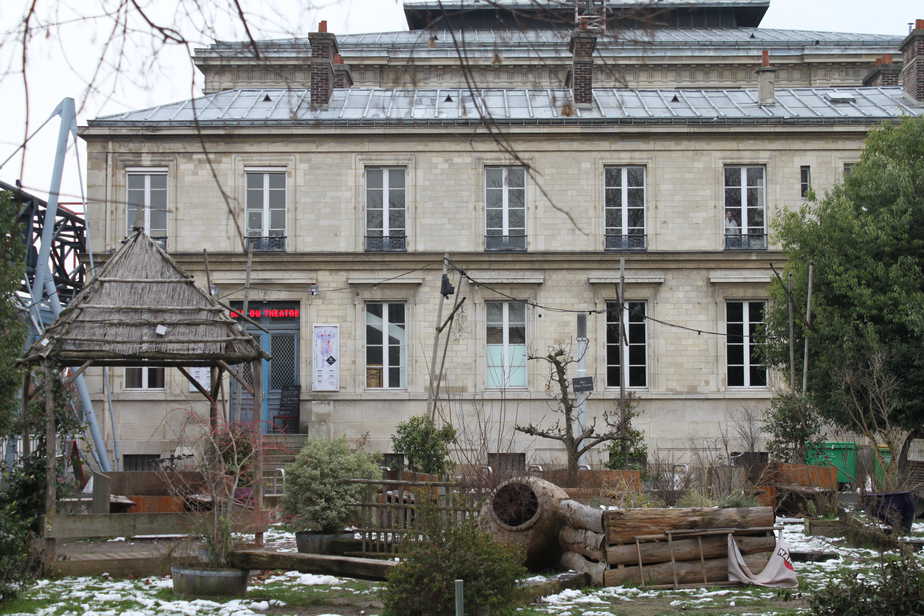 The Théâtre Paris-Villette is situated just outside of the main square. It is a small brick building with red lettering that simply states its modest name. Inside is a theater (obviously) as well as a relatively cheap bar with food and drinks.

Beware, because if your French is not up to par you might have a difficult time maneuvering around some of the plays. However, if you check the program, you might find an odd, foreign play acting out its scenes in this unique theatre.

If you don’t think you can handle the French, feel free to hang around and grab a drink inside the theatre or at the outside bar that waits just out back.

Parc de la Villette is a kind of artistic bubble surrounded by some of the poorest neighborhoods in Paris. The 19 and 20th arrondissements are the two poorest districts in Paris, therefore La Villette, both the park and the theatre, have very specific roles to play (pun intended).

For instance, the Théâre Paris-Villette tries to open its doors to people that would not normally think of attending a play. It does this by offering many different workshops intended to infuse the desire of theatrical expression into some of the poorer and more marginalized populations of Paris.

Along with the permanent “residents” of Parc de la Villette, such as the theaters and gardens, there are also events that take place seasonally. One of the most exciting is the outdoor movie screening.

This event is organized by the city of Paris and screens movies in accordance to the year’s theme. There are a handful of English films shown in their original version. The movie bill can be found online.

Feel free to make yourself at home with a pillow and some blankets. It is a popular event and you will share the green grass with tourists and locals alike. Bring your own popcorn.

The history and philosophy behind Parc de la Villette

Before 1984 Parc de la Villette was a massive slaughterhouse and meat market. It was originally created under the influence of Napoleon III. After formally shutting down in the 1970’s, the vast swath of land sat unused for nearly ten years.

Bernard Tschumi, a French architect, was elected to design and build the soon-to-be-famous park. Tschumi, however, was not content to build a park like all the others, and instead began seeking to design a park that would mix aesthetic beauty with philosophical ideals. 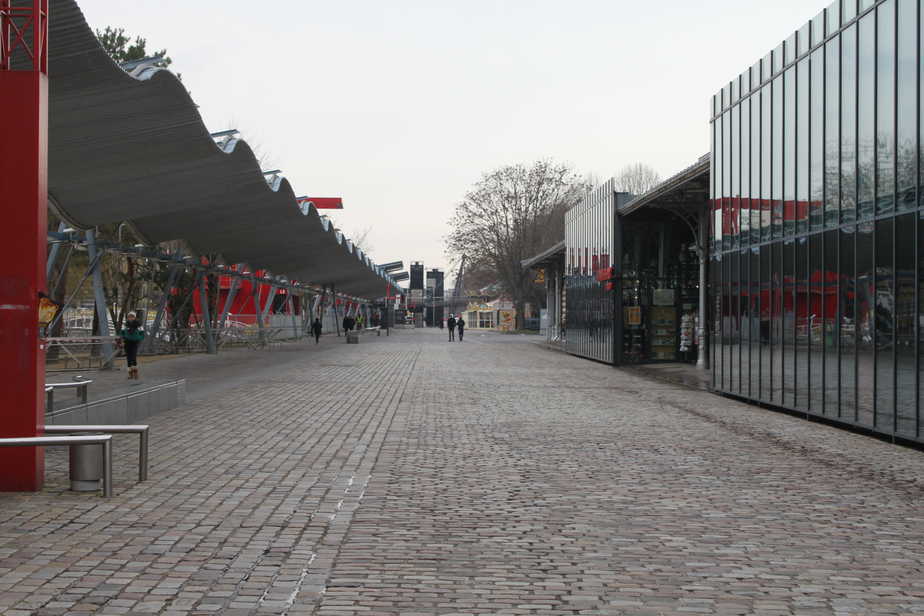 His idea was to create a park that, instead of being an attraction within itself, would would act as a space for other projects to flourish. Many parks, such as Central Park in New York City, are seen as spectacles, but La Villette turns this idea on its head and acts as the home for other spectacles.

Parc de la Villette is almost like a city of art within a city. There are countless things to see and do. It is unique and it is eccentric. Do not miss out on visiting the coolest park in Paris.