The Best French Restaurants in London 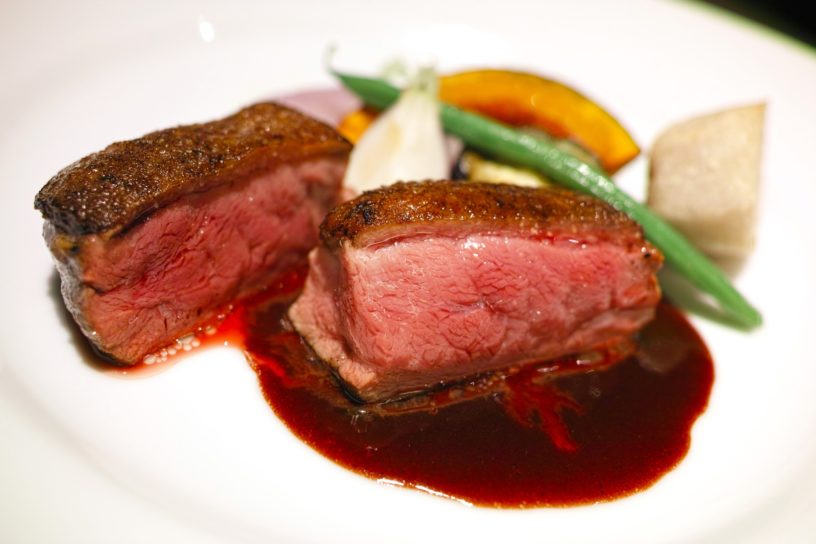 The best French Restaurants in London

French Cuisine in London was once really just one thing. It was very traditional, perhaps seen as classy or at least aspirational and as such it was an expensive restaurant to eat out at.

The traditional French Gastronomie options still exist in the UK capital, *collective sigh of relief*, and in fact we’ll go through some of the best in a minute.

But what’s interesting is these stalwart establishments have been joined by hoards of other Gallic goodness in the last few years.

Thanks to the infamous almost sibling like relationship between the two countries, France has been receiving retired British folk in and around the Dordogne for years, whilst the UK seems to scoop up bright young French twenty somethings keen to test out their talents in London. 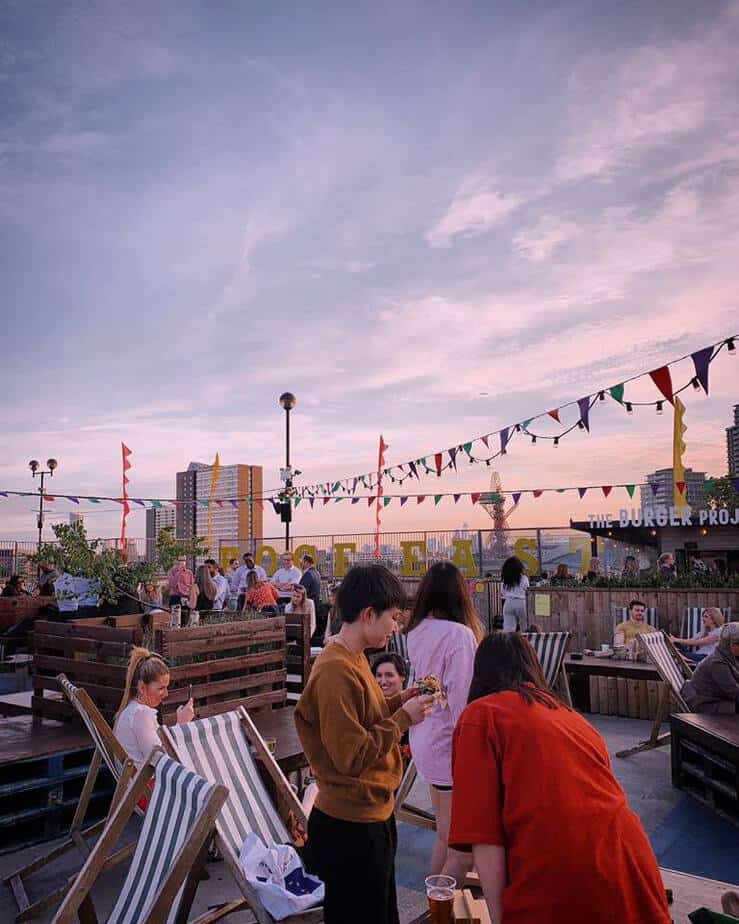 Young London the place for 20 something French expats to cut their teeth and test their talents. Roof East in London – by Roof East – Uploaded by them. Photo Credit Discover Walks.

This great exchange has lead to a real change in the French Cuisine on offer in a country which was not known for its food finesse, until multiculturalism swept in turning everyone into a self confessed “foody”.

French Cuisine is one of the many foreign offerings that London does really well, if you know where to go.

If it’s not broke, don’t fix it. Traditional French Cuisine is loved by many and prized as a sophisticated and heralded culinary tradition. 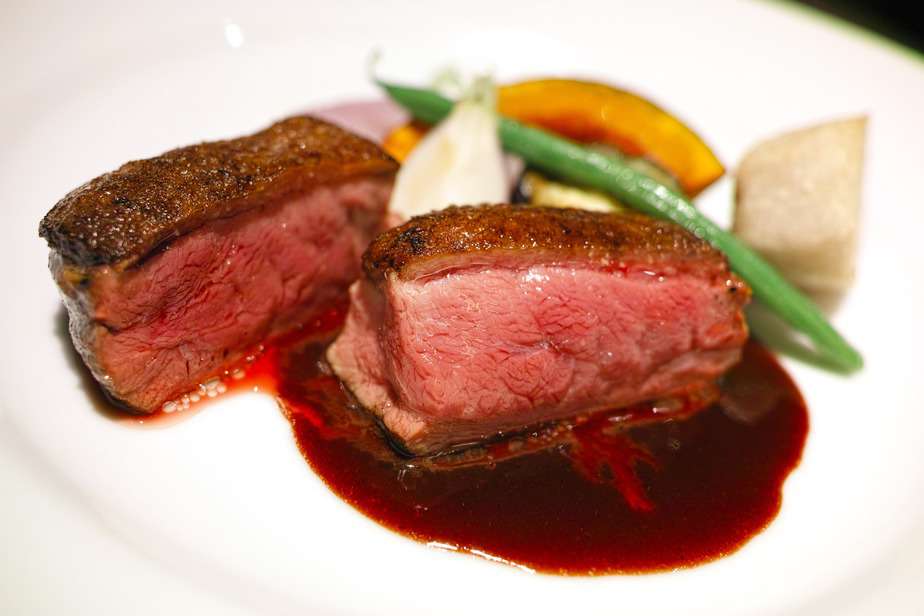 Sometimes you want something that feels entirely genuine. Mon Plaisir is just that.

London’s oldest Family run French Restaurant was established by the Viala brothers during the forties. Alain Lhermitte the current owner took it on in  1972 .

In service to his labour of love, he has  continued the tradition of serving top quality authentic French cuisine. The service is French and friendly. The dedicated team of  Aline and Alain Lhermitte’s waiters sport French accents as thick as their roux.

You can eat in one of four traditional dining rooms, stuffed full of French artefacts.

Highlights from the menu include; Scallops and Gambas flambéed in Pastis, Rib Eye Steak with Pommes Allumettes and Bearnaise and Pepper sauce, or Veal with morel mushrooms and crushed potatoes.

In a nod to the changing times, they have added two vegetarian options (lasagna and quinoa with grilled vegetables) for £16 each.

Most à la carte main courses come in around £20, with starters from £9.

The best bargains are reserved for those dining early with the three act Theatre menu which is a snip at £20.95 and conveniently located in Covent Garden for theatreland.

Many of us associate French Cuisine with romance. It’s the whole atmosphere it evokes. Your tastebuds transport you to the last time you ate that food, perhaps somewhere like this? 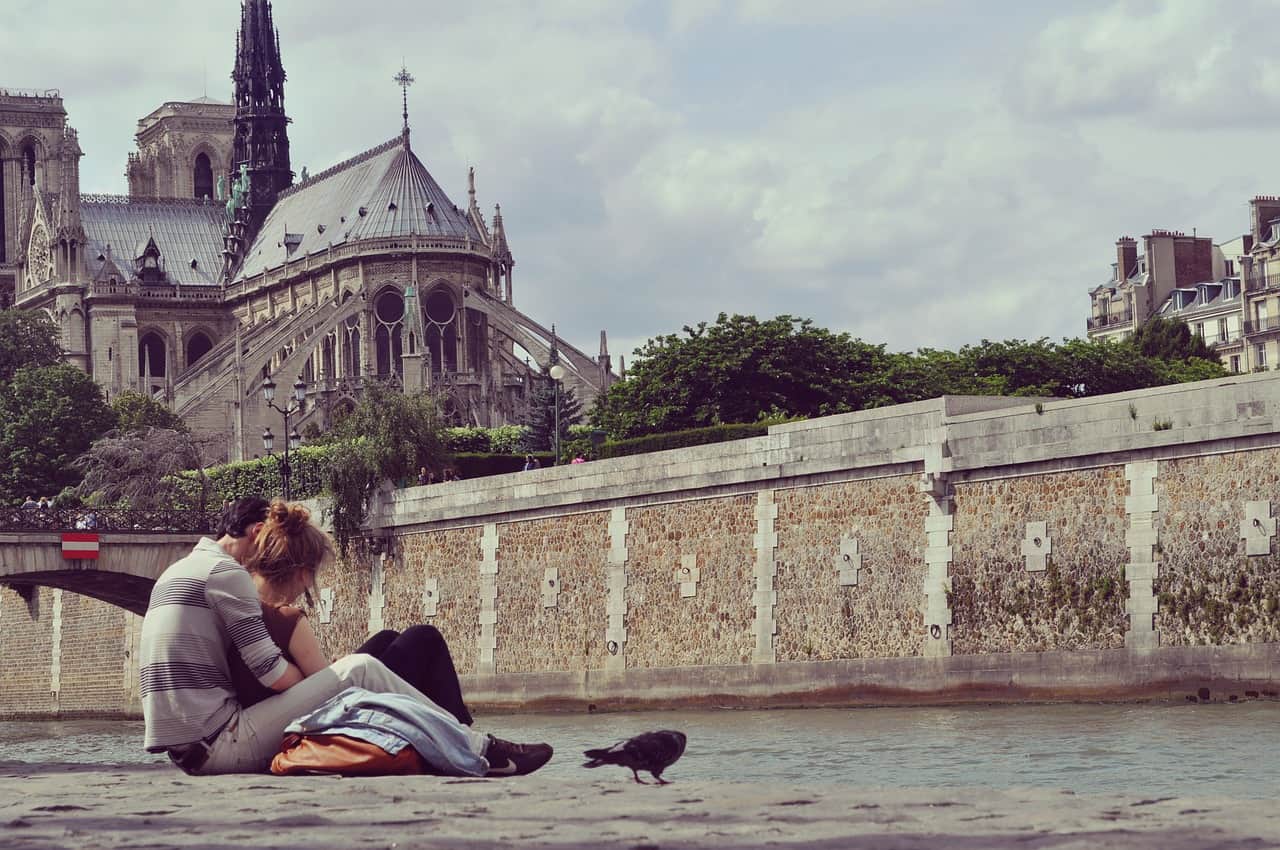 The fact is, we’re so spoilt for choice eating out in London that we can afford to be picky and choose the perfect restaurant for every occasion.

So French fine dining is not necessarily what we’ll favour for a business meeting, or a meal with mates or colleagues.

However, these restaurants come into their own when we want to celebrate an anniversary or special occasion and indeed mark the meaning with this choice.

Clos Maggiore is a French restaurant of this ilk. It has been voted most romantic restaurant in London. 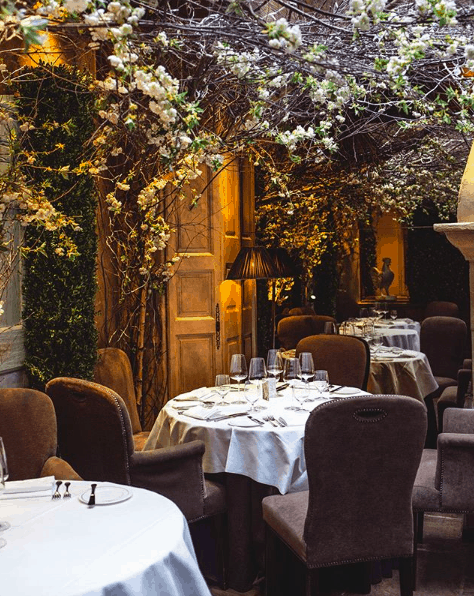 The staff report an average of three proposals a week, and you can see why. Here, the ambiance and decor follow the exquisitely elegant food.

You may have guessed that all this doesn’t come cheap, but the good news is that, once again located in Covent Garden, there are pre-Theatre deals to be had:

Three courses and a glass of bubbly for £29

*Suggestion: (maybe have a hearty breakfast and skip lunch)

Their tasting menu is available at £65 per person with an additional £40 for wine pairing. 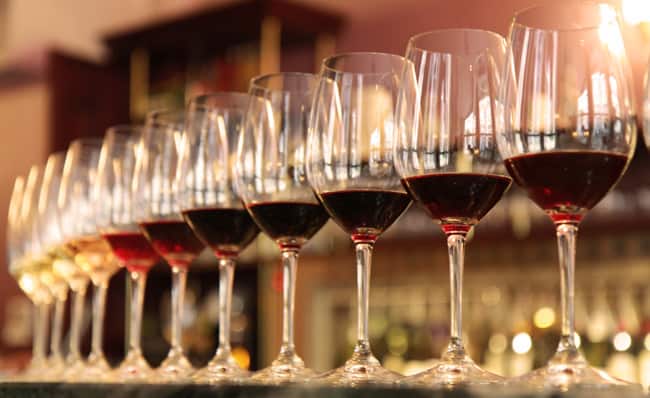 For more details and booking here is their website.

Sketch London is quite the institution. I think it might be best to start with a photograph of their imposing decor. 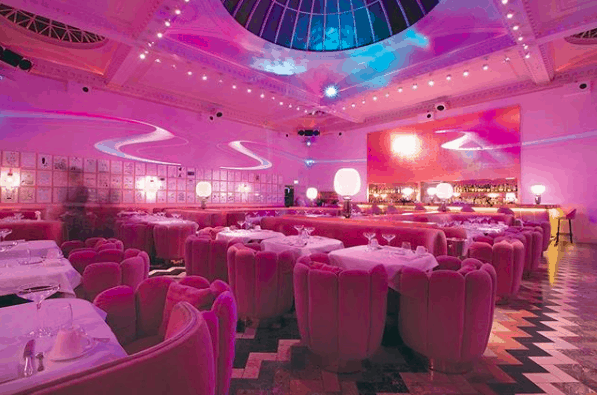 This other-wordly Mayfair address has been consistently patronised since its opening in 2003, by both a hip, well-heeled crowd, as well as the curious and tourists keen to drop in and see what all the fuss is about.

The brainchild of Algerian born restauranteur Mourad Mazouz, who invented his very own brand of “G-Art-stronomique”.

Michelin starred chef Pierre Gagnaire heads up the menu with his creations.

There is also a brilliant bar for a sexy, quirky date night. My enduring memory of Sketch is a rather classic one – the most Instagrammed loos in London. 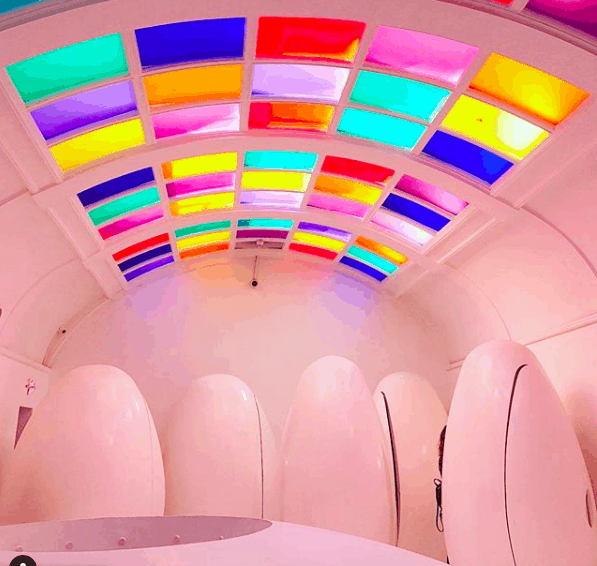 This has got to be the element of French Cuisine that divides the fairweather French food fans from the true blue diehards!

How willing are you to see a wrinkly, butter soaked mollusc on the end of your fork? 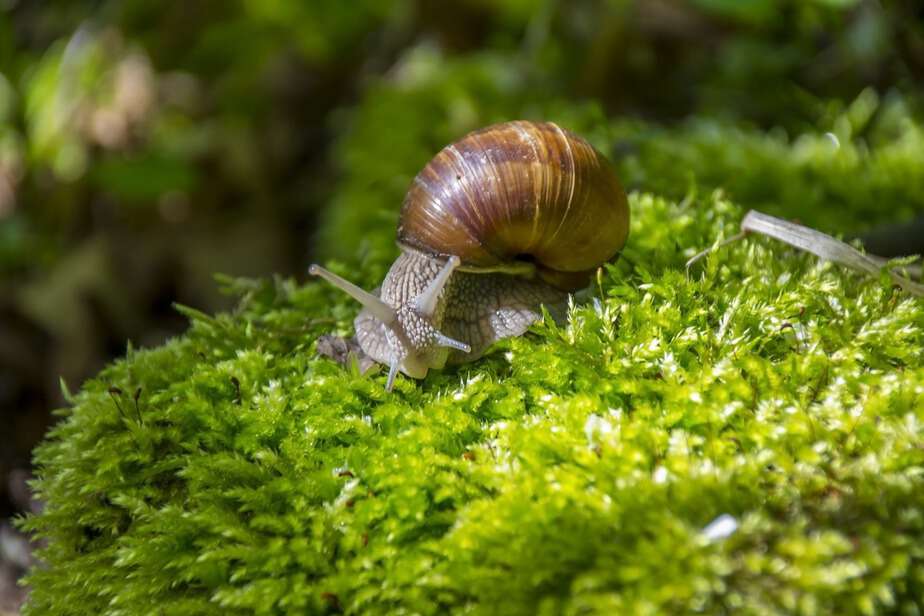 The great divide where French Cuisine is concerned – l’escargot. Photo credit by PhotoMIX Company from Pixabay.

When in Rome, or when in Burgundy rather, may be one thing. But if you’re actually seeking out this dining experience in London then you belong to another class of aficionado.

If so, I have just the restaurant for you.

L’Escargot was the first restaurant in London to serve snails. Famously, they used to farm them in the basement. They are especially proud of their garlic butter sauce.

Today, l’Escargot will prepare you six of its famous snails for £16 or a dozen for £30. Add £3 to enjoy them flambéd with Ricard.

Choose from: Jerusalem artichoke and truffle risotto, confit of duck with Savoy cabbage and bacon or fish goujons and frites. 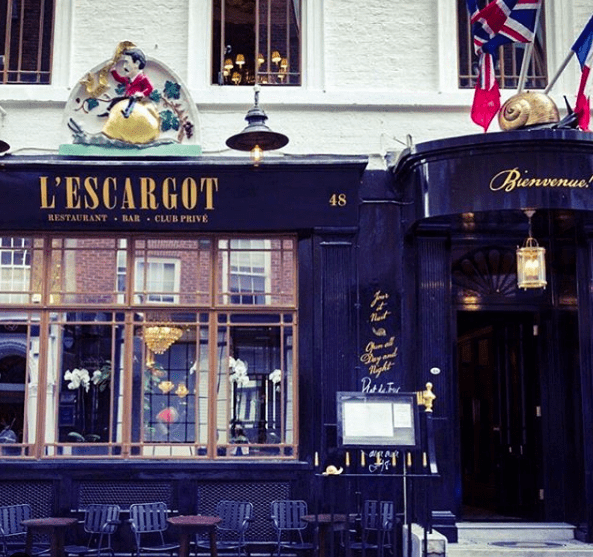 L’Escargot and its famous facade on Greek street. Photo credit @maxmcbridge from Instagram. 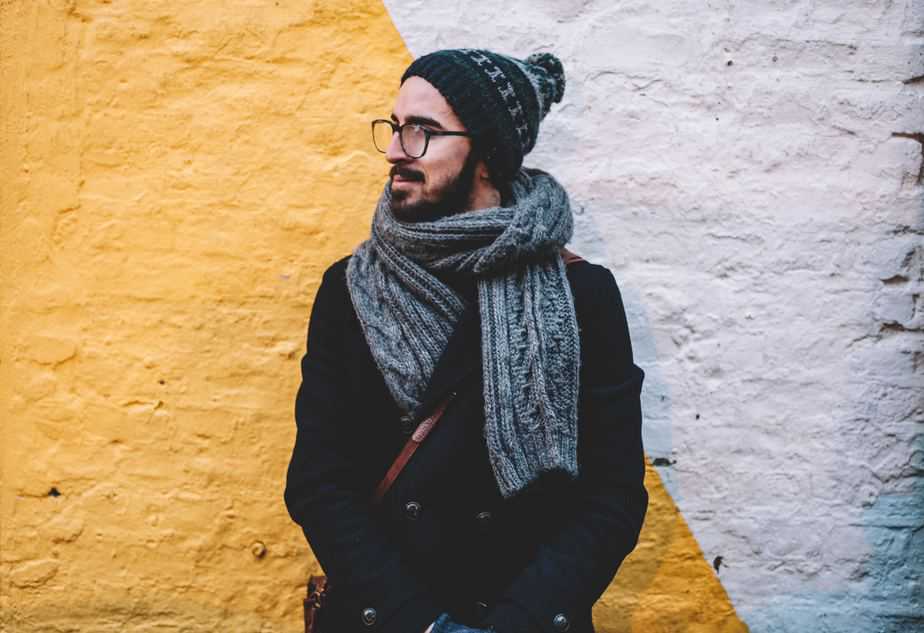 It’s near impossible to ignore an emerging generation of hip, young, French entrepreneurs on the London restaurant and bar scene.

This ongoing French love affair with London started several years ago. Now, we’re seeing the fruits of this Eurostar romance blossom with some great spots to check out to satisfy all our gallic cravings.

Alpes London describes itself rather modestly as a ‘small Alpine bistro in a shipping container’.

Alpes is a passion project brought to you by the Raclette Brothers. Their vision was to bring Raclette cheese and well chosen wine to this hip London neighbourhood.

At Alpes you’ll be able to reminisce about every treasured ski holiday souvenir, whilst enjoying tartiflette, fondue or cheese scraped at your table. 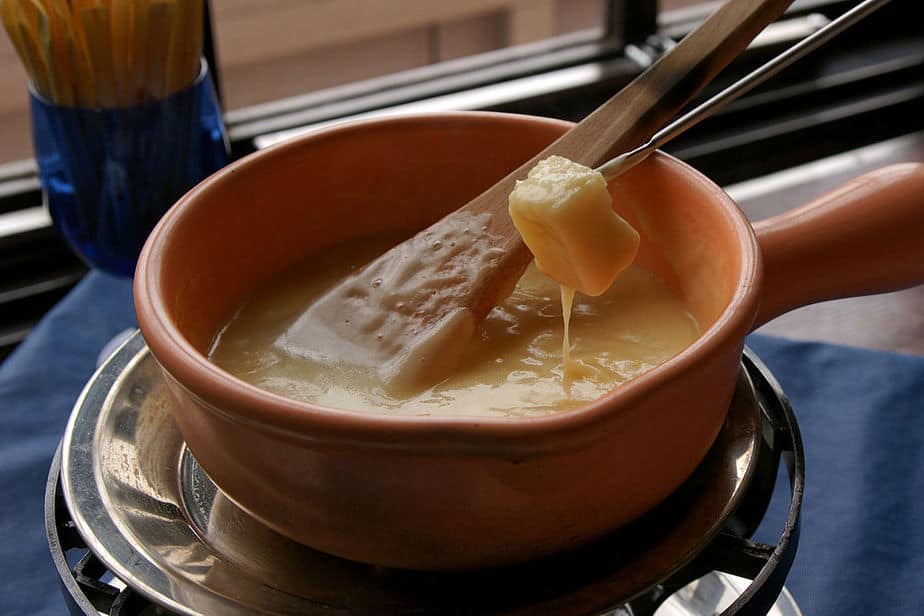 What I like here is that they’re not such purists that they ignore homegrown goodness. Wines come both from the Alpes as well as good British bottles. One of their fondues is made with a mix of Lincolnshire poacher, gruyere and of course raclette.

The deep fried olives stuffed with goat’s cheese are my top starter recommendation.

A great night out. It’s small and sweet, so maybe best to book here. 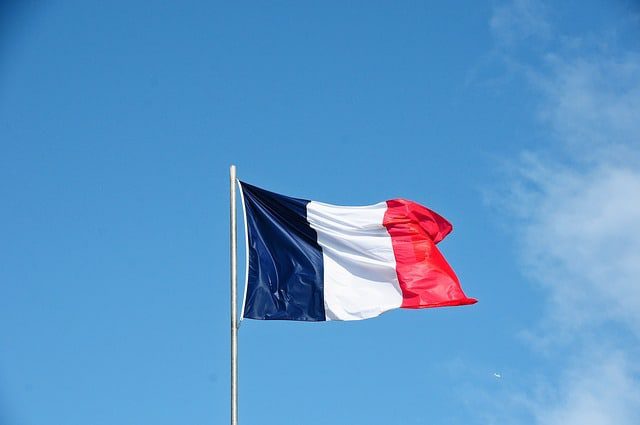 Here’s an address with a difference. The French Institute in London is located in the heart of Little Paris South Kensington. It’s comprised of a language centre, a French language cinema ( ciné lumière ) and a Bistrot, which opens from 11 serving strong coffee.

Lunch options are very correct. The Bistro boasts charcuterie, quiches, soups, as well as patisserie and viennoiserie charged according to plate size.

There are some rather nice wines by-the-glass, from pays d’Oc to superior Chablis.

Great for lunches. In the early evening you might want to eat here before heading upstairs for some French independent cinema.

Le Bistrot at Institut Français can be found at:

The thing that the French, or in fact any francophile, might miss most in London is the social and cultural phenomenon that is the French market – le marché français. 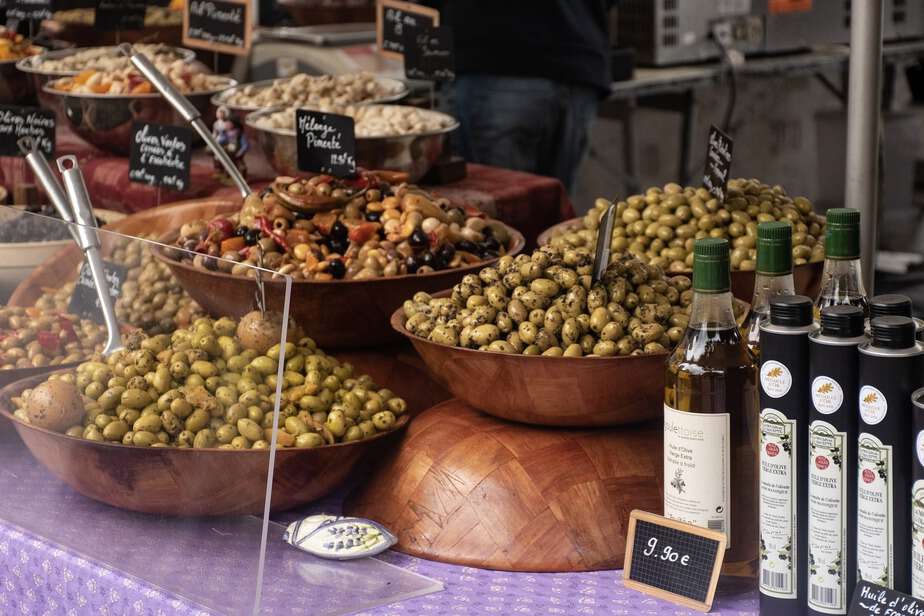 The French Protestant church decided to take matters into their own hands, when they set up ‘The French Market Soho’.

The idea was to welcome their French congregation, expats and local Londoners  in a relaxed French Market atmosphere to taste charcuterie, cheese and wine.

Also welcoming a wealth of French designers and start ups such as; “Louis et Victorie”,  “La Poupotterie”, “French Laundry”, “Amadoria”, “Love My Vélo”, “Happy Duck” and “Wine Story”, the overall aim was to raise funds for the church’s renovation.

Borough Market is another good spot to head to if your missing the weekly tradition of doing le marché either en famille, with friends or your other half.

The French Comte are one of these such market stalls. Specialising in artisan cheeses, and smoked and cured meats from their native region of Franche Comte.

You’ll receive a warm welcome from Fabien Joly and Florent Gacon. Not to mention cancoillotte—a rare runny cheese infused with champagne, garlic, vin jaune or walnuts. What’s not to love?

Here’s a market map to help you find them.

Fred is a passionate pâtissier!

He began early with an apprenticeship aged 14, got his wings burnt by an early entrepreneurial experience. But undeterred in 1985 he invented the recipe for the Merveilleux cakes. 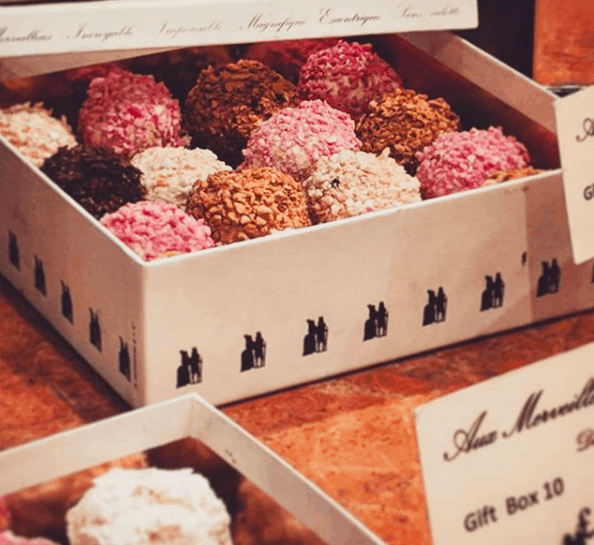 Cheered on by this success, he reworked the traditional Brioche, creating his unique Cramiques, also on sale Aux Merveilleux de Fred.

I’d recommend taking a box of these delicious creations to share with your hosts and friends with coffee after a dinner party. Which is, in fact a very French tradition, for one of the dinner party guests to bring something sweet to finish the meal with.

Perhaps you’re after something as solid as a really good Baguette?

I have always found that as a rule of thumb London excels more at sourdough loaves and the like than baguettes.

However, the French community of London decided that it was high time to sniff out the best baguettes in town.

A classic address on the shortlist was Notting Hill bakery Maison Puget.

You’re in one of the most beautiful, self-proclaimed villages in West London and you can stumble off your front doorstep and find baguettes and patisseries like these.

Other contenders who made the shortlist, according to French Morning the francophone online news for Londoners, were: 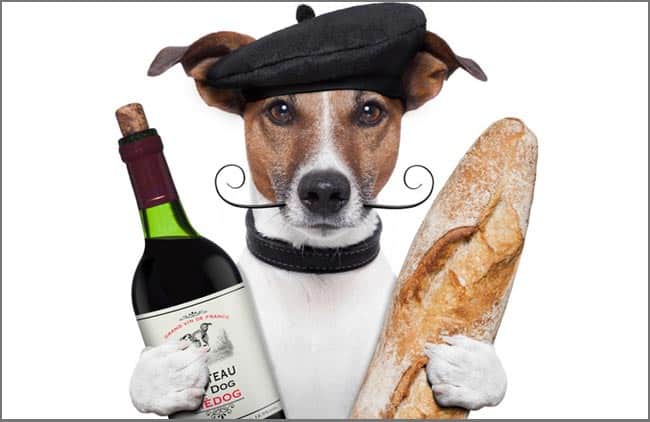 So there you have it. Some great ways to enjoy Gallic gastronomy in the UK capital.

You’ll never be short of ideas of where to go for elegant fine dining, heritage and history or simple street food and hastily rustled up tasty goodness to transport you and your tastebuds back to your last French holiday.