A Look at La Seine Musicale in Paris 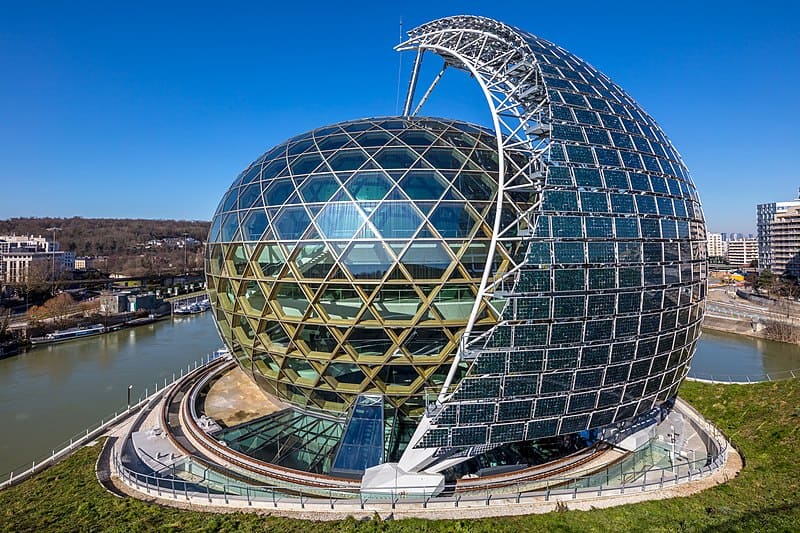 A Look at La Seine Musicale in Paris

Thanks to new projects and cutting edge development, there is usually something new to see or do in Paris every few weeks.

Architecturally, Paris has been at the forefront of experimental and “out there” building construction ever since the Eiffel Tower found a permanent home in the city. Nothing is ever too far fetched; the looming Paris Olympics have even seen plans drawn up for a stadium that will be completely covered in/ and camouflaged by dense forest. 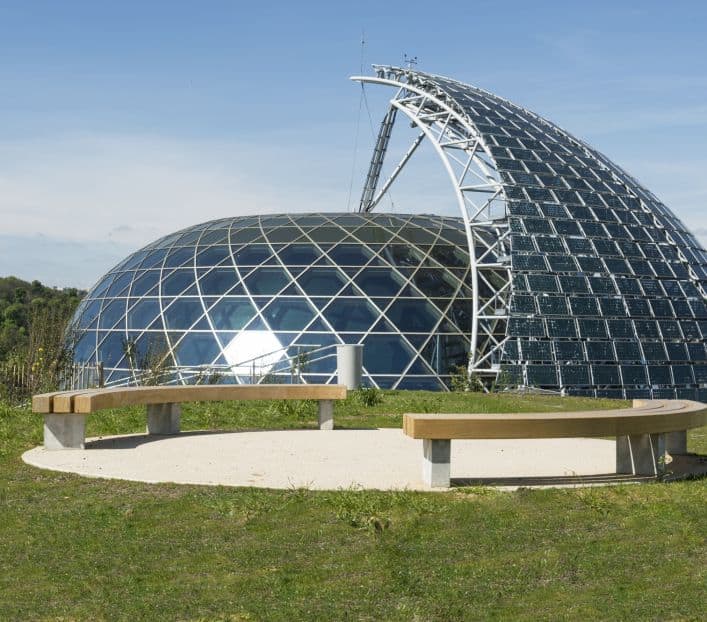 The Seine Musicale is one of the latest new projects to reach fruition in the city of Paris. It was built on the Île Seguin, an island that floats on the Seine river in the far south west of the city .

Keen to take a closer look?

The Concept Behind La Seine Musicale in Paris

La Seine Musicale is a music and performance venue that, as mentioned, sits in the middle of the Seine River.

Despite the original concept being drawn up in 2009, the building was only completed during the early months of 2017. It has been open to the public ever since.

It was decided that the city of Paris was in need of yet another performance venue where the arts could have space to flourish. The facilities can be divided into two main sections:  The Grand Seine and the Auditorium. 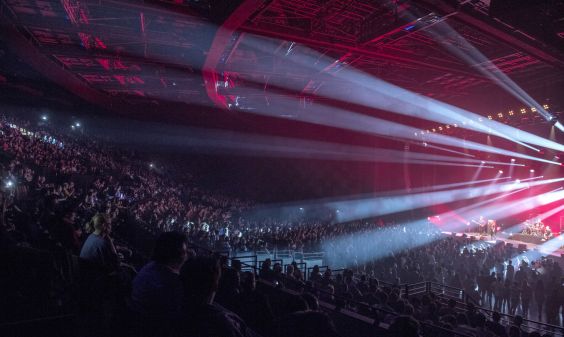 The Grand Seine – by La Seine Musicale – Sourced from their website

The Grand Seine is the larger of the two, with a seating capacity of up to 6000 people. This space is used for a variety of arts ranging between live concerts, theatre productions and ballets.

The Auditorium is much smaller; its seating capacity reaches only 1150 people. The usage here is dedicated solely to classical music. Musical groups including the Paris Opera Children’s Choir, the Maîtrise des Hauts-de-Seine, and Insula Orchestra have made the auditorium of ;a Seine Musicale their official new residencies.

Amongst the other buildings that make up the entirety of la Seine Musical there are shopping facilities, rehearsal studios and even restaurants.

The abundance of space and sections to this establishment enable it to host regular exhibition and art events on top of all the regular shows that make up the program. 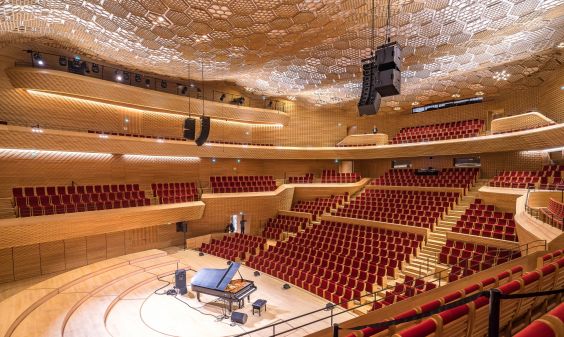 The Auditorium – by La Seine Musicale – Sourced from their website

Getting to la Seine Musicale from Paris’ city centre is quite a journey; its is not the kind of Parisian attraction that you pass by casually during a free guided walking tour.

It is situated on the part of the Seine that runs outside of what is considered the main “circle of Paris” in the outlying suburbs.

The nearest metro stop to la Seine Musicale would be the Pont de Sèvres. From here you’ll need to walk south along the bank of the Seine until you reach the first bridge that can take you onto the island upon which the facilities are built. 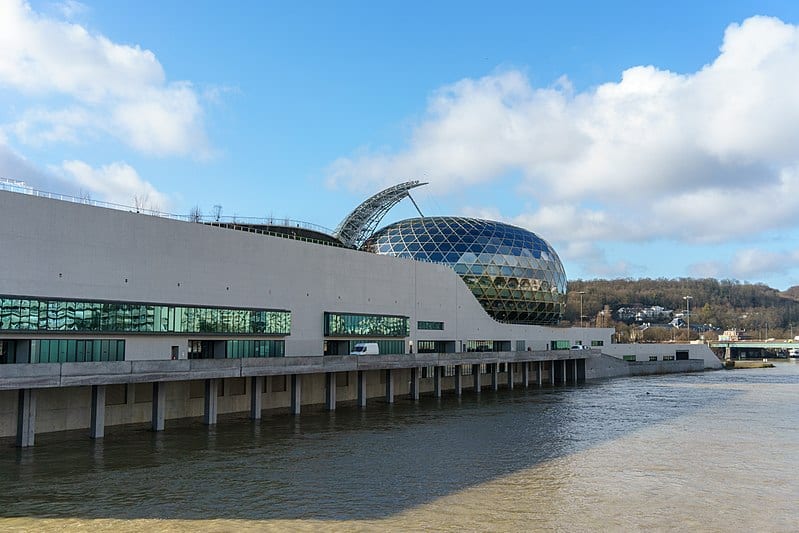 The Île Seguin is a Seine River island of a similar shape and size to the Île de la Cité in the city center on which the Notre Dame is built. The western tip of the island features a park space, as does the Île de la Cité, and this park space is the foundation for the Seine Musicale.

This is a beautiful and very green part of Paris that not many tourists get to see since most of the main attractions are found closer to the city center.

La Seine Musicale made waves during its constriction phase thanks to the very unique design of both the auditorium and the concert hall.

The Auditorium, the smaller of the two, is shaped like a giant egg made out of steel and glass that glistens by day and by night. It is unlike anything anyone in the city of Paris has seen before when it comes to architecture, and well worth the praise it receives.

The larger concert hall, The Grand Seine, is a rectangular concrete building with a slope on one side that leads up to the roof of the venue. Both the slope and the rooftop are covered in lush, green lawns and the space offers panoramic views over Paris & the surrounding suburbs. 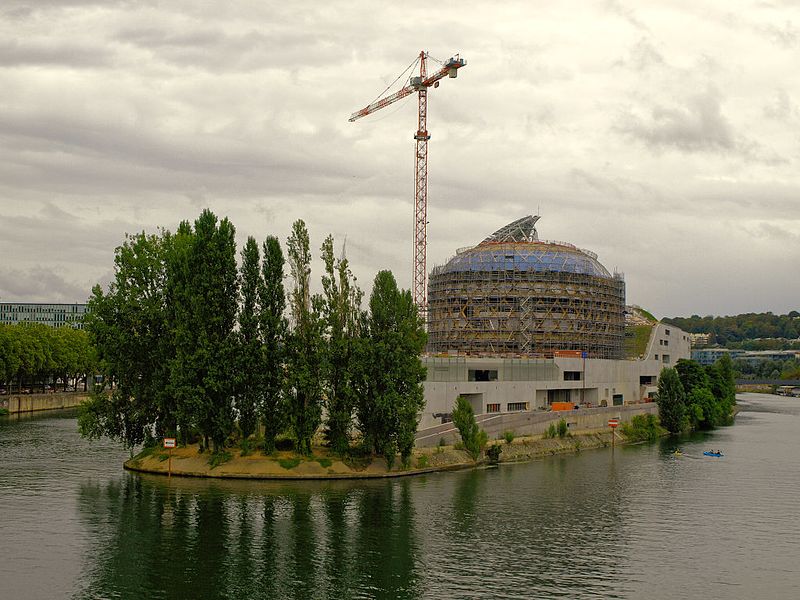 There is a ground floor garden, the Bellini Garden, that curves around the buildings and is open to the public as an urban green space in attempt to preserve biodiversity.

In essence, all of these facilities combine to create a sort of cultural island. A one stop shop for all things art and performance where the public can enjoy it as much as the artists doing the creating.

To top off an already impressive package, la Seine Musical is the official new home for two of the greatest pieces of sculpture works still in existence. On the grounds you’ll be able to visit Rodin’s ‘The Call to Arms’ and César’s ‘The Thumb’. 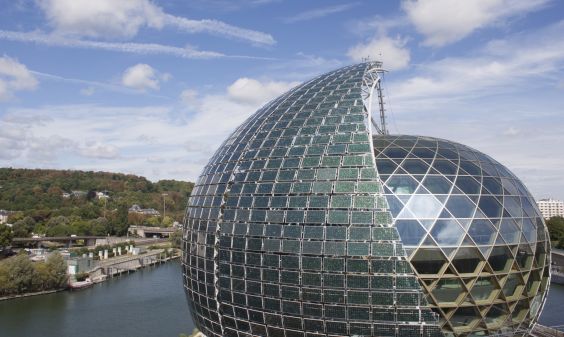 Nearby Attractions to La Seine Musicale in Paris

Often people are hesitant to commit to making the journey out to this part of Paris as there is not much else to see while there.

When you consider just how much there is to do once you arrive on this section of the island, you really won’t need much else to fill you day.

However if you are concerned with your itinerary, the right bank of this part of the Seine directly across the island features an entire strip of restaurants and patisseries for visitors to enjoy. 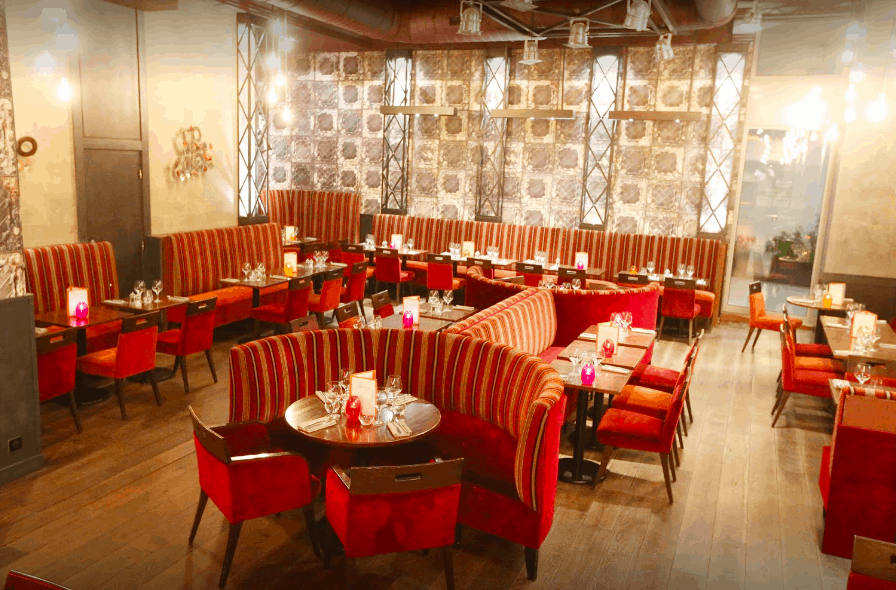 The establishments here know that shoes at la Seine Musicale can run late into the evening, so late night dining is embraced.

Café Renaud is situated a short walk from the bridge that takes you on and off of the island & is open until 2am daily. I enjoyed their Lebanese tasting plate; their hamburgers are massive and appear a worthwhile option as well! 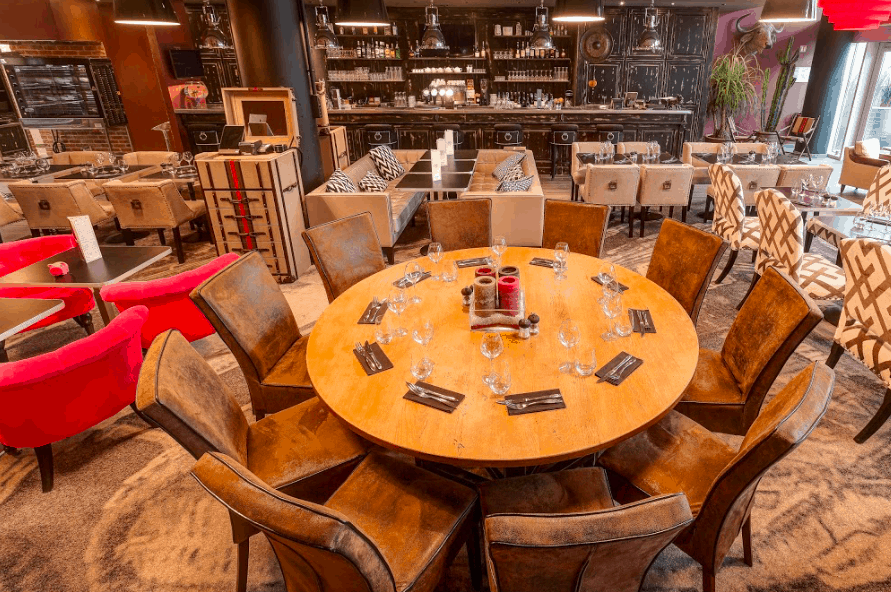 Meating – by Meating – Uploaded by them

A few doors down you’ll find the Crêperie Seguin; a beautiful little spot that specializes in both sweet and savory crêpe based meals.

For authentic French cuisine before or after your event at the Seine Musicale make a reservation at Meating, also found on this main Seine strip.