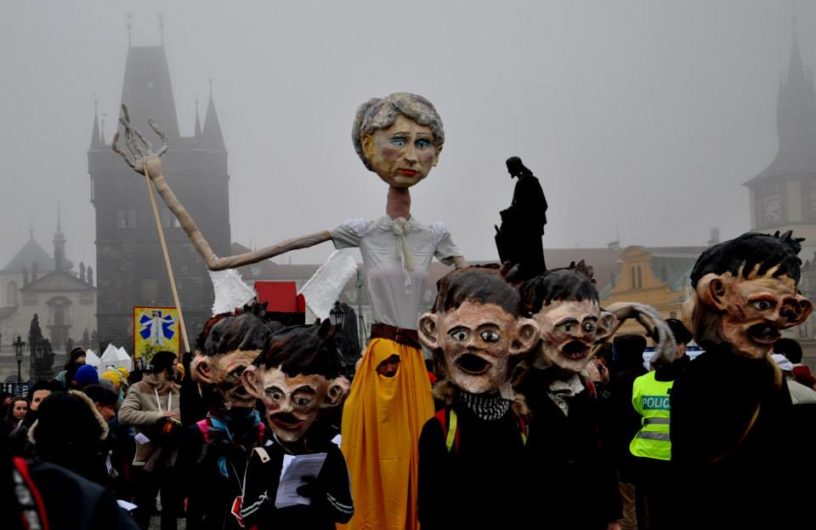 Sametové posvícení, an event that takes place in November as a critique of today's politicians. Picture from 2013. Photo by: Alžběta's friend Anna.

It is 2019, when the Czech Republic celebrates the 30th anniversary of Velvet Revolution.

This event took place from the 17th November 1989 until early December 1989. Autumn 1989 is a period you might be familiar with – it is the era of the fall of the Berlin Wall, that was followed by other revolutionary events that happened in Poland, Hungary, Bulgaria, Romania… simply, what the time we describe as the end of the Cold War. 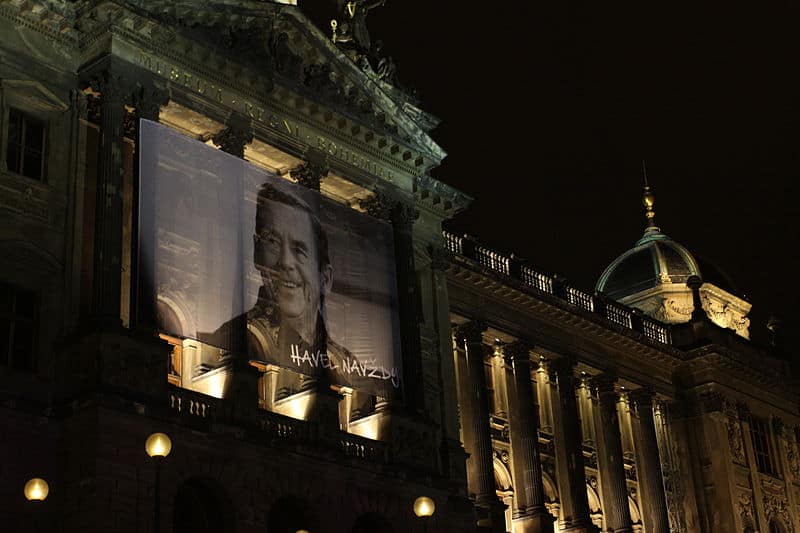 Nowadays, all the mentioned countries are part of the European Union, some of them comprise the Schengen Area. This means that you could easily cross the country border without feeling any pressure. All you need to do is to show your ID card only. Today, a Spanish student could simply apply for an Erasmus in Romania, and a Romanian student could spend a semester or two in France. Needless to say, for the preceding generation of the post-Soviet block, this would have sounded like a fairy-tale. 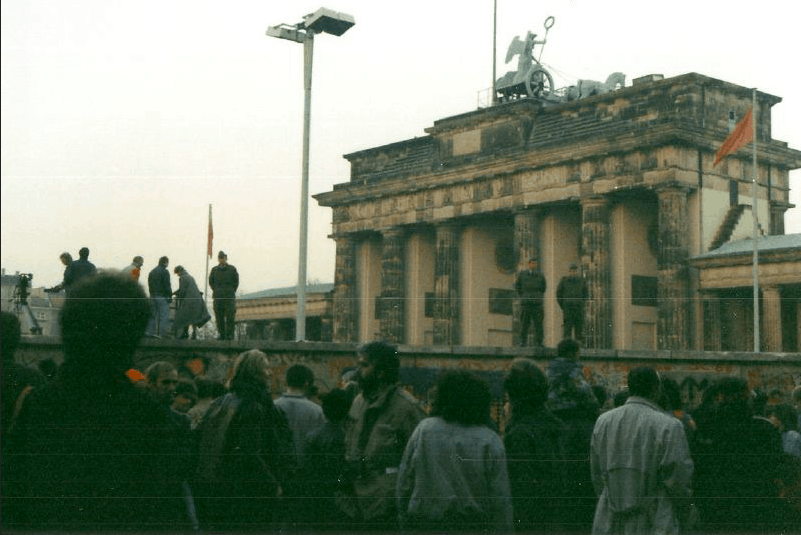 The totalitarian past and the cosmopolitan present

During the totalitarian regime in the former Czechoslovakia (I will get to the topic of our separation later), travelling abroad, especially to the Western world, had been a privilege of certain people only; the others were left to stay in the country, with a maximal possibility of spending holiday in Yugoslavia or in some other “allied” country with a sea.  And even for this summer break, a lot of documents were needed and a certain loyalty to the Party was required, too. Vice versa – a lot of Westerners have reached the land of Czechoslovakia only after 1989.

If you travel to Prague today, you’d be surprised by this information, as annually, the city hosts approximately 8 million of tourists, all the bars would offer a menu in at least four different languages, there’s a lot of expats living here and a lot of international companies that are still developing.

However, these are the changes that evolved in the past 30 years, bringing, of course, the good and the bad things to our everyday lives. 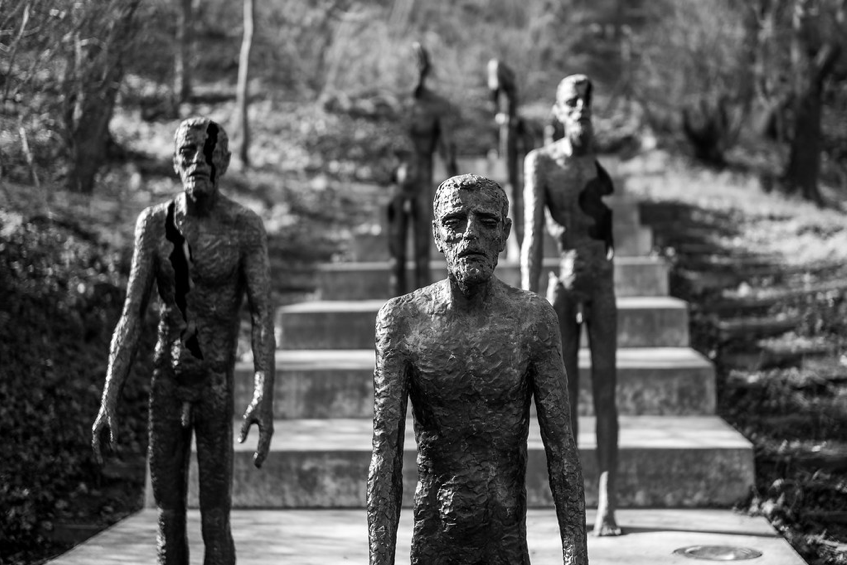 Memorial to the Victims of Communism. Prague. You can reach this monument, taking tram number 9, 22, 20, 12 to the station Újezd. Photo sourced from Flickr, author: Roman Boed

Why Velvet, why Revolution?

So, what is the story behind the Velvet Revolution, and why should we call it the Velvet one?

As I’ve already mentioned above, the communist regimes were systematically collapsing by the end of 1980’s.  The people were unsatisfied – in Romania, for example, certain types of foods were unavailable.

It is also true that the amount of exotic fruit was limited, and to buy a lemon or two, one would have to get up really early in the morning and wait in a queue, or would have to have some good friends in the grocery store.

Boys and men were not allowed to wear long hair, and only a few privileged people would have been able to buy blue jeans exported from the capitalist countries… Intellectuals openly disapproving of the actual state of the country, especially of the censorship, were sacked out of their jobs and had to work in unqualified positions, like this they couldn’t have spread their ideas… Basically, this could not have lasted forever, and it didn’t. 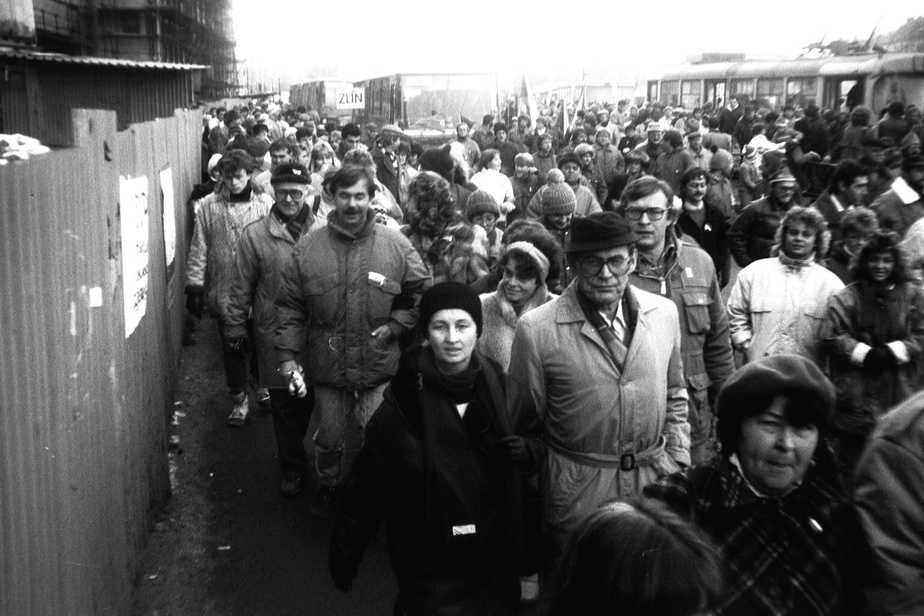 On the 17th November, a peaceful march of Prague students, that was supposed to pay a tribute to the WW2 victims, suddenly transformed into revolution. The main part happened on Wenceslas Place in the downtown of Prague. Concerts and speeches took place. One of the most emblematic songs that were played on this day was “Náměšť” by a Czech folk songwriter Jaroslav Hutka. In the text (here translated by Lenka Zbruz), Hutka sings:

The peace-fullness related to  the November events also resulted in the name of the revolution. Sametová revoluce (Velvet revolution) or Nežná revoluce (Gentle revolution, as the Slovaks call it), was far from violent or harmful. Until now, this manifestation is seen as an ideal way to protest. 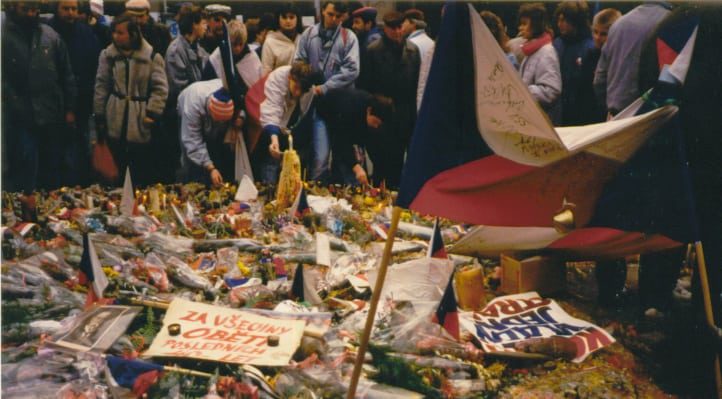 The revolution took place on Wenceslas Square, which is a main city square that you could easily reach using the metro of Prague (stations Můstek or Muzeum). Wenceslas, in Czech language Václav, is the name of the patron saint of Czech lands, a former duke of Bohemia who lived in the 10th century.

Accidentally, the bearer of this name, other Václav, Václav Havel, happened to be also the main personality of the revolution, and a later president of the liberated Czechoslovakian / Czech state. Plenty of Czechs are still looking up to this politician, who doesn’t only play an important role as a symbol of the revolution, but is also a proof of the communist terror  – being imprisoned for over five years. Also, Václav Havel was a writer, and you could possibly read his theatre plays and poems translated in other languages. 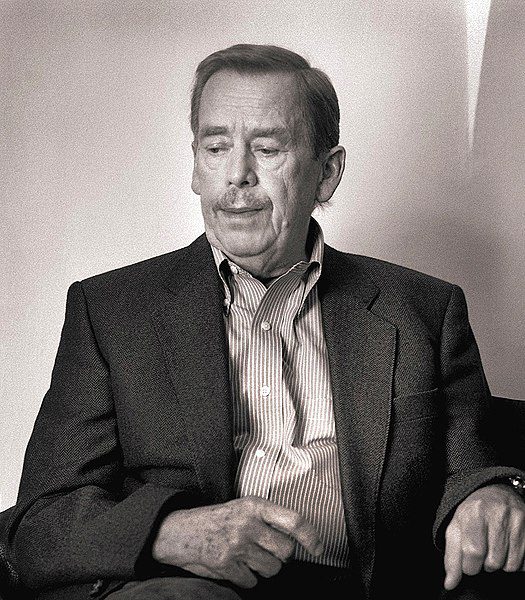 Václav Havel died in 2011, and a lot of people of all generations attended the funeral march. Until now, he is a very powerful symbol, despite nobody being perfect.

On the date of his death, people wear short trousers as a tribute to the president, who, during his inauguration soon after the revolution, didn’t posses a lot of ceremonial suits. Way too skinny after his stay in jail, he only took the pair of trousers that he had, and tied it with a belt too high, so his ankles were visible to everyone.

Showing your ankles on the 18th December means you are paying tribute to the president Havel. 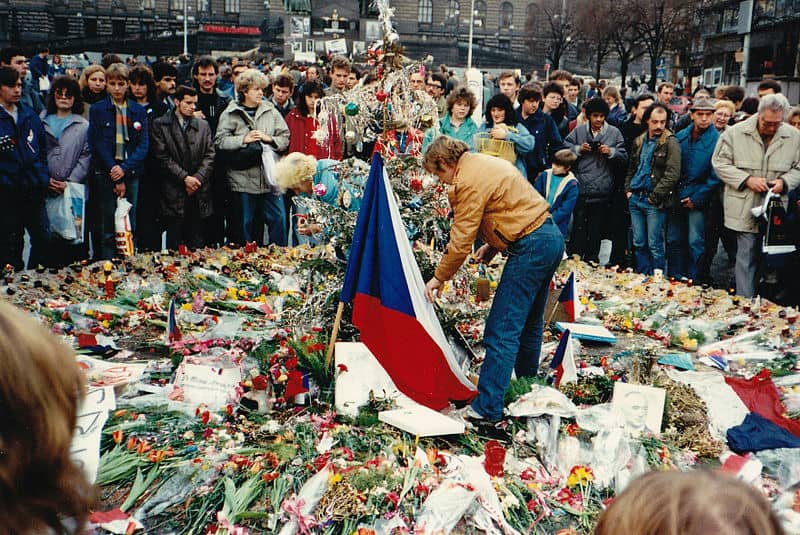 …so, why did you guys split?

To retell the story about the “break up” of Czechia and Slovakia could take a long time. I will try to simplify it as much as I can.

As a person of a true Czechoslovak descent (my mother is Czech and my father is Slovak), I am also a true product of Czechoslovakia, since I was born just a few months before the two countries separated. In my passport, you could read the place of birth Czechoslovakia, yet, my nationality is Czech. And that is a case of many other people in both countries.

Czechia and Slovakia united after the end of WW1, but the peoples have never spoken the same language. However, a Slovak speaker could easily understand a Czech speaker, and vice versa – although, I must admit that the Slovaks are much better in understanding Czechs than we Czechs are in understanding the Slovak language.

On the one hand, a long list of vocabulary is the same, and on the other hand, the accent, intonation and some words are actually very different. Also, since 1969, the republic became a federation, and there were two capital cities – Prague and Bratislava. The countries finally split in 1993, and since this time, there are two autonomous states.

Needless to say, our separation occurred as a rather peaceful event, without any demonstrations or violence.

And what’s going on now?

A lot of people would ask me whether the Czechs and the Slovak feel any resentments towards the communist era, whether they’d possibly miss these times and eventually vote for the communist party again?

These are all rather hard questions.

I believe that the totalitarian regime switched the mentality of the people in the country, that the repression remains alive among certain groups… there is another important issue of nostalgia, or the so-called “ostalgia”, the nostalgia related to the communist and soviet past.

It is true that some aspects of the regime were actually good. There were strong social securities, zero percent of unemployment and homelessness, yet on the other hand, political prisoners, censorship and closed borders to the rest of the world.

As time passes by, all the memories vanish and the perception of the pass differs a lot. The results of the preceding era is quite clear – the inhabitants of the Czech Republic, Slovakia, Poland etc., have lower salaries compared to those coming from the countries that did not live the same experience. 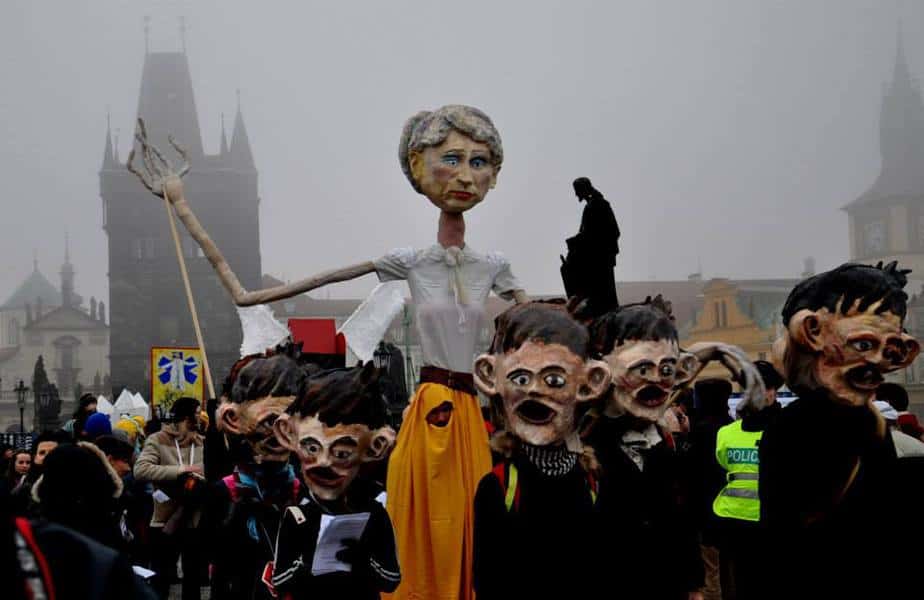 Sametové posvícení, an event that takes place in November as a critique of today’s politicians. Picture from 2013. Photo by: Alžběta’s friend Anna.

If you’re coming to Prague, you could ask your guide on one of our tours about their experience and their attitude because no-one would ever tell you the same.

If you are interested in the personality of Václav Havel, take a look to the balcony of the today’s’ Marks & Spencer shop on the square. From this balcony, Václav Havel greeted the crowd on the streets below. 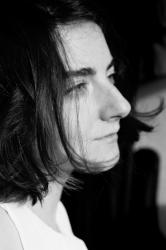