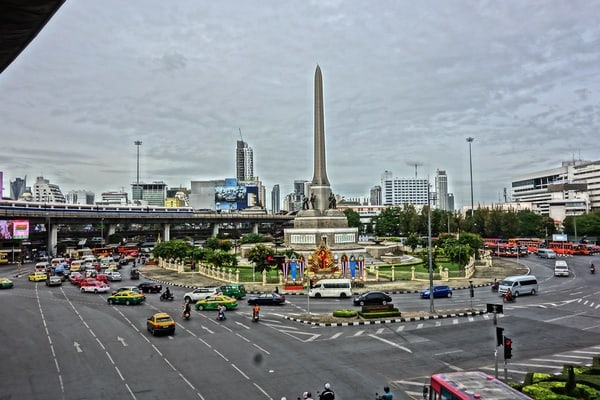 Although Bangkok’s Victory Monument is the geographical centre of the city, it isn’t actually that much of a major attraction for many visitors.

This may be due to the fact that it isn’t always included on most tourist trail itineraries, and is indeed more ‘local’ in many ways.

But it is one of Bangkok’s main transportation hubs and is also home to one of the city’s most famous monuments. But if that’s not enough to entice a few Bangkok tourists, they might be interested to know that it is also something of a hot spot in various other ways like shopping, eating, and even entertainment. 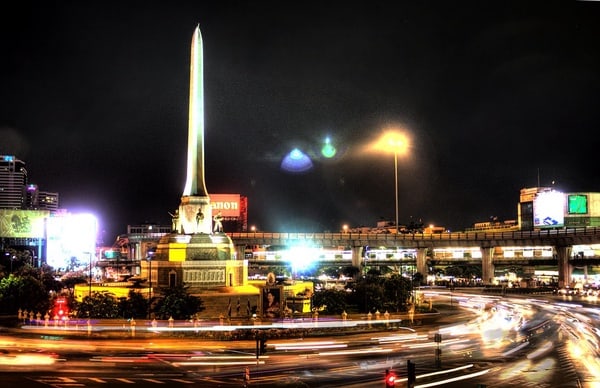 Victory monument is actually a pretty lively and densely-populated area of the city, especially at particular time of the day. Not only does it have a BTS station that has its own walkway offering great views of the area, it is also a major hub for other forms of Bangkok transportation.

Pretty much every bus in the city with a route in the immediate or non-immediate vicinity will stop here, or even reach the end of their line, while others will just be starting from here. Many people change from one bus to another at Victory Monument as it’s not always that easy to go directly from A to B by one bus in Bangkok. 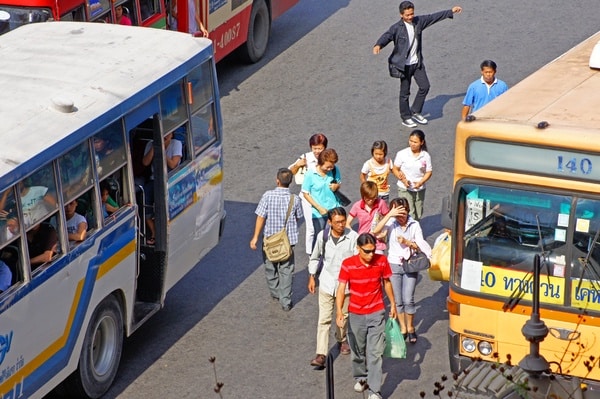 This is also the place where many people come to get a van. Vans run through the city as well as to and from the city, and again this is a hub for many of those journeys.

So in many ways Victory Monument is a kind of ‘passing through’ region of the city for many people, with literally thousands moving through every day on their way to work, school, and various other trips, and the transport connections from here reach to virtually everywhere within 100 kilometres of the city.

But obviously when there are people anywhere in Bangkok you can pretty much guarantee a plethora of street food options, of which this area has many.

And Victory Monument has plenty of shopping malls, outdoor markets, and restaurants, as well as a couple of the city’s really well-known entertainment venues.

So let’s take a closer look into the lively thrall of Bangkok’s Victory Monument area. 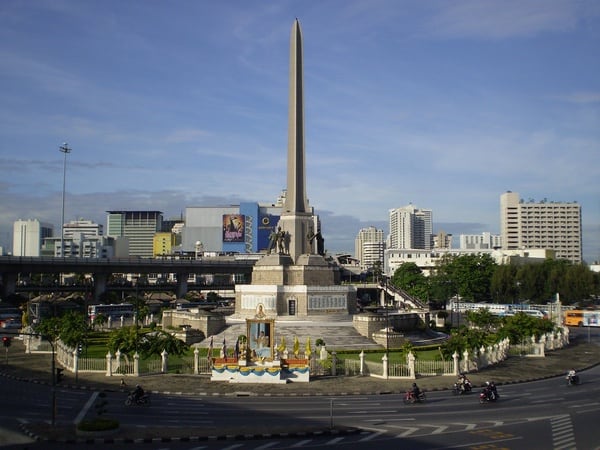 The actual monument is considered as an attraction itself, and is one of those well-known Bangkok images frequently captured by photographers, especially at night.

The monument is enclosed within its own central circle on the Phahonyothin Road, one of Bangkok’s busiest intersections in the city where Ratchavithi, Phayathai and Phahonyothin meet. It was constructed in 1941 to honour the various heroic deeds of soldiers, as well as policemen and civilians who fought for the kingdom during the Indo-China border conflict involving Thailand and France. 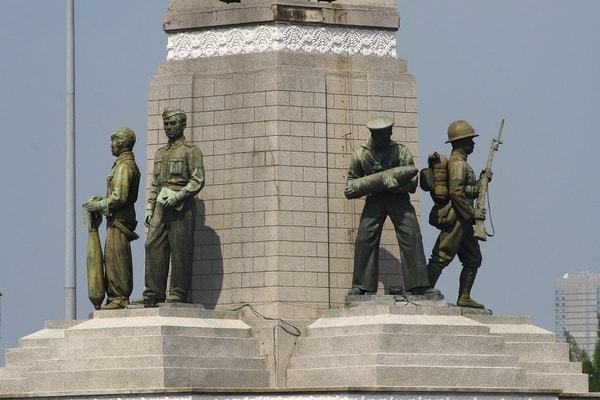 Although Victory Monument doesn’t compare mall-wise to any of the city’s modern, deluxe, ‘hi-so’ malls like IkonSiam or Emquartier, it does have a very ‘local’ vibe to it which in many ways can be more attractive due to its authenticity.

It also has lots of different types of shopping places at one area. It is a popular choice with students due to its market-style budget shopping options, and you will largely find street fashion and cheap accessories on offer around here.

So you have malls, a street market, and a variety of small stores along the road by way of Victory Point and Ratchathewi Sois 3 to 9. 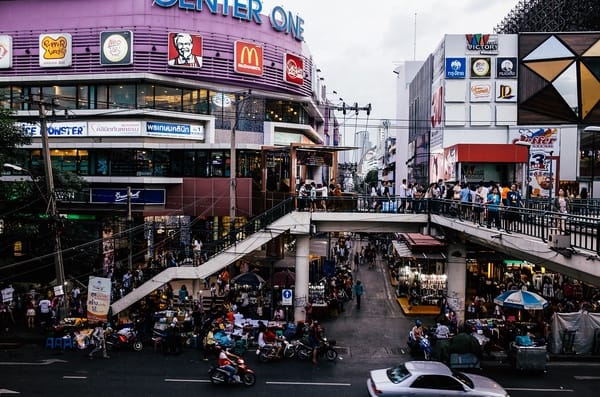 The outdoor bazaar right underneath the BTS skywalk is known as Victory Point there is actually a staircase from the skywalk that leads down to it. It’s jam-packed with market-style stalls and food vendors. The range of clothing and fashion accessories on sale here is pretty much similar to what you would find at any market or street-side stalls throughout Bangkok.

In terms of malls you have a few options. Firstly, there is Victory Mall, which again can be accessed directly from the BTS skywalk, and it also has a very local vibe to it.

Then just across from there is Centre One, another small shopping mall situated on the Victory Monument roundabout. You’ll find a few small shops in here with some of them selling a range of wholesale clothes and accessories.

To the right of the previous two malls if you are facing them from the front is Century Plaza, which is a combination of mall concept and Cineplex all in one. This is an 8-storey mall comprising has 4 floors of shopping and dining, and there is a Tops Supermarket in the basement. There are also a few stalls selling various items around the supermarket.

The 5th floor is where you’ll find the 8-screen cinema, and then floors 6-8 are a designated ‘education zone’ where a variety of tutoring schools and institutes can be found, as with the majority of Bangkok malls.

If you are in the area and you fancy something completely different to that, or any of the ‘cheap’ malls in Victory Monument, it is worth knowing that just around the corner from Century Plaza is Soi Rang Nam.

This is another area popular with locals that has a variety of different restaurants, pubs, bars and shops along it.

It is also where you can find King Power. King Power is the Thai duty-free shop that you’ll see in airports, but it also has this large, modern mall for anyone who wants to drop by and stock up on a variety of tax-free items. It is actually part of the luxury Pullman Hotel, a popular stop-off for business visitors wanting to stay in this region of the city.

What you get here is 2 floors of exclusive duty-free shopping which includes a range of high-quality items. This comes in the form of fashion, jewellery, homeware, art, crafts, and spa products, which are all mainly local in origin. On the 2nd floor you’ll find an extensive range of international goods along the lines of luxury brands like Cartier, Burberry, and Mont Blanc as well as cameras and other fairly expensive electronic equipment and such like.

Aside from the restaurants that you’ll find in the 3 malls at Victory Monument which offer various types of Thai, Japanese and international-style cuisine, there are also some cheap and  tasty ‘street eats’ around the area.

You’ll find all the usual favourites like chicken & rice, soups and noodles, and one of the main draws is the Boat Noodles.

If you are on a Bangkok ‘foodie jaunt’, it might also be fair to say that the ‘Guay Jeeow Rua’ (Boat Noodles) are something of a ‘must try’.

The boat noodles restaurant in this area is renowned for its price and also quality. The thing about this dish is that it comes cheap – although the bowls are miniscule. So you’ll see the locals partaking of them and just ordering and re-ordering when they want another, until they finally get the bill at the end. 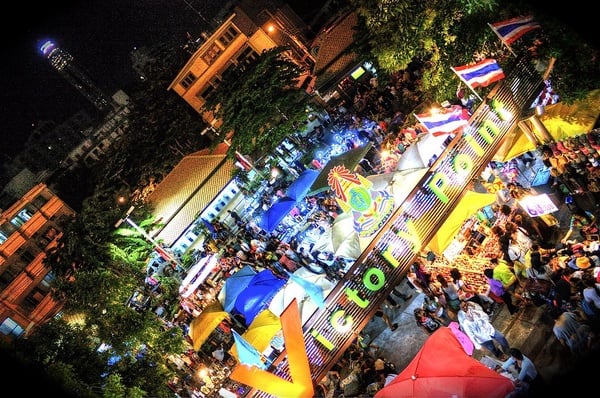 The Victory Monument area takes on a different vibe at night and in many ways really comes into its own. There is a selection of decent bars and pubs, with some of them featuring live music.

The most well-known and established is the Saxophone Pub, which is actually one of Bangkok’s oldest jazz and blues pubs, which regularly features live bands with a tinge of jazz, rock, ska, and blues.

Saxophone has a 25-year history behind it, and is frequented mainly by Thais, with a few expats and occasional visitors. There can be as many as 3 or 4 different live bands some evenings, and the pub is a comfortable place that does beer, cocktails, and food, and is just a short walk from BTS Station. The place has won many accolades and has been voted as the Best Music Venue in Bangkok on many occasions. 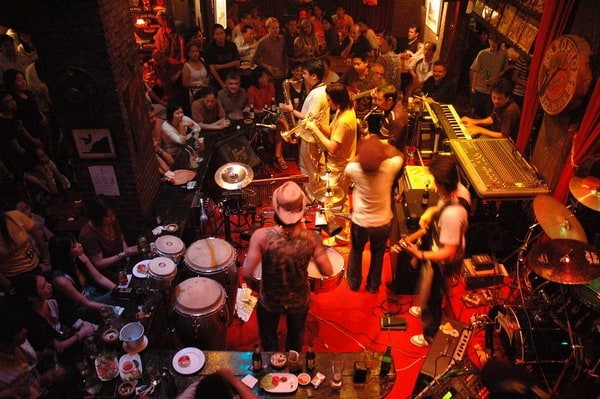 If you fancy a drink around somewhere with a bit more of a ‘street’ vibe to it, then  there are a few more makeshift-type bars that pop up around Victory Point of an evening. They offer cheap drinks like local beers and bucket cocktails and local beers.

And if the mood takes you, you can always wander off round the corner towards Soi Rang Nam where you’ll find quite a plethora of entertainment venues by way of bars restaurants, pubs, and live music venues.

If you do fancy staying around this area you’ll find the previously mentioned Pullman Bangkok King Power Hotel a 5-minute walk away. The hotel has close to 400 rooms and high-quality suites equipped with everything to suit the lifestyle of any sophisticated modern traveller.

Or if that all sounds a little too upmarket, you’ll be pleased to know that all manner of accommodation has been steadily springing up in the Victory Monument vicinity over recent years, as well as a few established smaller hotels that often evade the mass tourism map.

For starters you have the Royal View Resort, a small three-star hotel which can be found right next to the areas nice little park (Santhipap Park). Some of the rooms on the higher floors provide some decent views of the city skyline.

Then there is the Bizotel on Soi Rang Nam, just 5 minutes from Victory Monument BTS and near the King Power complex. This place offers comfortable, mid-range rooms and again is close to the park.

There’s also been something of a popularity surge on hostels in Bangkok over the last few years, and you’ll find a couple of decent places like Yellow Rooms, which is also an hotel, around the Victory Monument offering comfortable lodging and reasonable rates.