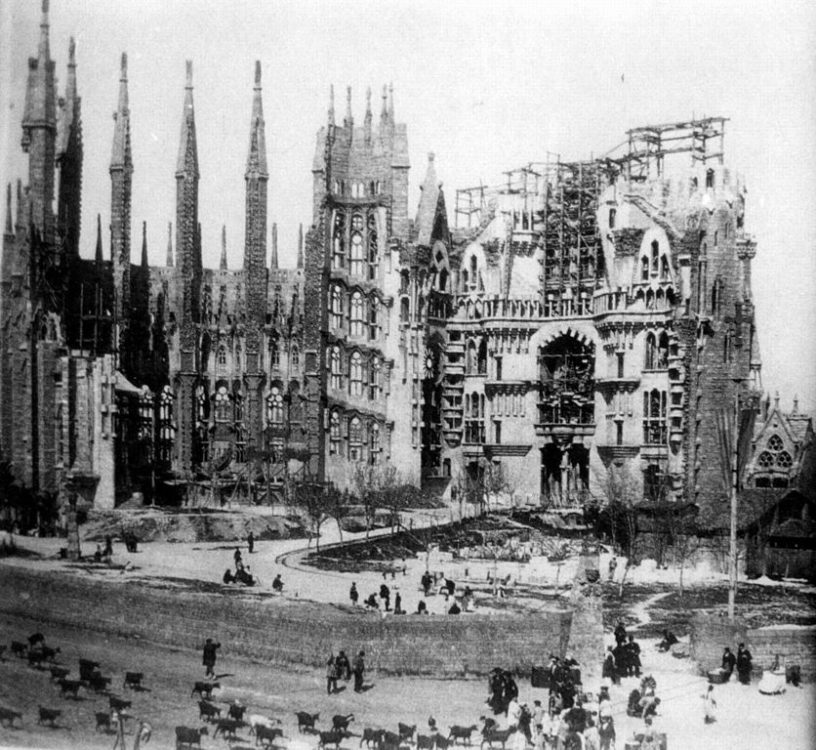 If you’ve been to the beautiful city of Barcelona in Spain, chances are you’ve been to La Sagrada Familia! And, even if you’ve never visited, I’m betting that you’ve heard of this famously “un-finished” basilica in this Spanish hot spot.

La Sagrada Familia is a Roman Catholic basilica in the Eixample district of Barcelona. Well, it’s technically a minor basilica and was dubbed so by Pope Benedict XVI in 2010. The site is also a UNESCO World Heritage Site. And, speaking from personal experience, it is an absolute must-see if you find yourself in Barcelona. Make sure you take the time to admire both the exterior and the interior of the church, as both aspects are impressive!

If you wondering about the history of La Sagrada Familia, let’s take a closer look at the idea for the church, famous Spanish architect Antoni Gaudí’s involvement in the project, and why it still isn’t finished after nearly 140 years of construction.

The idea for La Sagrada Familia is born 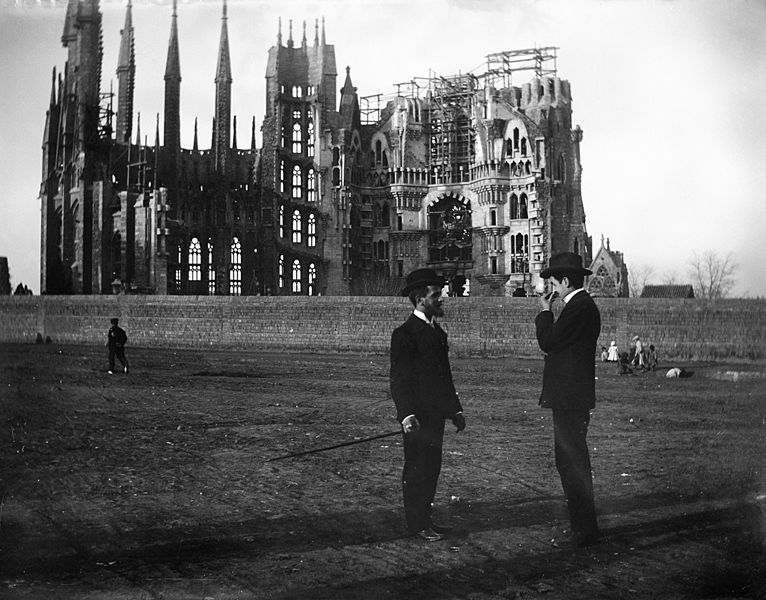 La Sagrada Familia in 1905 by Baldomer Gili i Roig – WikiCommons

A bookseller named Josep Maria Bocabella is behind the idea for La Sagrada Familia. He was also the founder of the Spiritual Association of Devotees of St. Joseph, and in 1872, he visited the Vatican in Rome.

Feeling inspired by the beauty of what he saw in Rome when he got back to Barcelona, Bocabella was determined to build a church inspired by the Basilica Della Santa Casa in Loreta, Italy.

Thanks to several generous donations, Bocabella was able to hire the architect Francisco de Paula del Villar to design the church, and they broke ground on March 19, 1882. The pair began with the apse crypt, and del Villar made plans to construct a Gothic Revival style church.

Del Villar decided to resign after completing the crypt, and in 1883, famous artist and architect Antoni Gaudí took over.

Antoni Gaudí takes over as architect 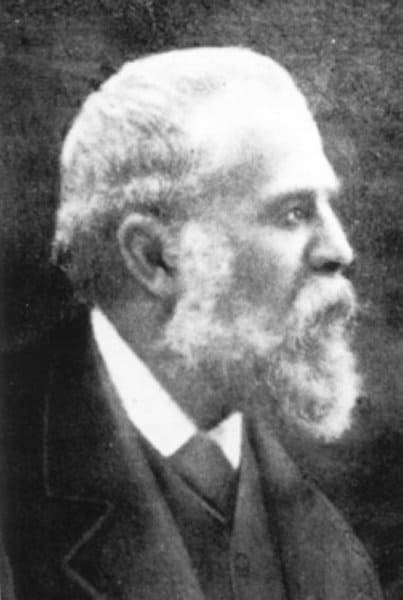 Gaudí was just 33 years old when he was entrusted with the La Sagrada Familia project. If you’ve never heard of Gaudí, he is a Spanish artist and architect who is a superstar in Spain and in Barcelona in particular. He is known as the father of “Catalonian Modernism” and he designed several buildings in Barcelona as well as a park. If you’re in the city I recommend that you check out the Park Güell and the Casa Batlló to get a better idea of his creations!

When Gaudí took over the project, he essentially threw out the original plans and came up with his own. Rather than construct the Gothic Revival church that del Villar was hoping for, Gaudí decided to design a structure that is definitely more surreal than Gothic!

When once asked what was taking construction so long, Gaudí famously replied: “My client is not in a hurry.” The church is completely funded by donations from visitors and the public, so Gaudí knew going into the project that it would take centuries to complete.

Gaudí’s plans for an expiatory temple 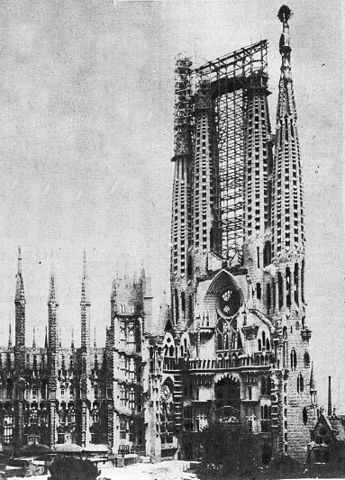 La Sagrada Familia is an “expiatory temple,” which in the Catholic faith means that it is being constructed as a reparation of any sins made against God or the Catholic Church’s laws. As mentioned, it is completely funded by donations, or Catholics looking to repent their sins.

Because Gaudí knew that the construction would take an extremely long time, he focused on the front of the church first. He credited this decision with the fact that he wanted the generation who began work on the church to be able to see some form of completion as well as inspire future generations to continue with the work!

Gaudí was actually only able to complete the plans for the three main sections of the church: the central nave, the sacristy, and the facade of Glory. These plans have served as inspiration for the remaining sections now that the completion is in another architect’s hands!

The only section that Gaudí was able to see completed is the Nativity Facade, which was built between 1894 and 1930. In addition to Christian figures such as the Virgin Mary, her husband Joseph, and the infant Jesus, Gaudí also included other symbols such as the Tree of Life and several different animals.

The Passion Facade is my personal favorite and depicts the Passion of Christ, which is the last week of Jesus’ life before he was crucified. This facade is fairly somber to commemorate a tragic time for Christians, and it is also very simply decorated.

The interior can’t be missed either and is perhaps the best place to admire Gaudí’s flamboyant and surrealist style. The stained glass windows against the sculptured stone is a beautiful juxtaposition and you’ll want to keep your camera’s ready! 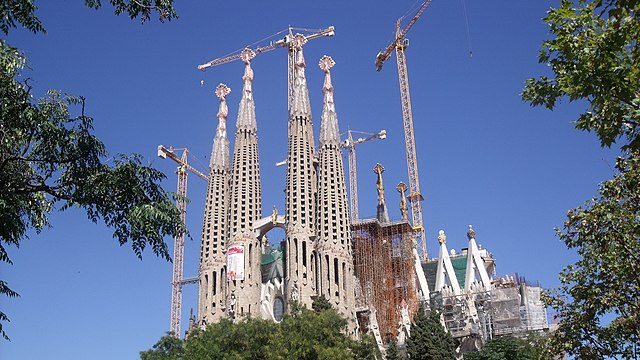 As on now, there is finally a tentative end date in sight for La Sagrada Familia: 2026, the 100 year anniversary of Gaudí’s death, but experts say that there’s no way that the entire basilica will be completed in time.

As of 2015, construction was 70% done, and at that point, plans were moving forward to erect 6 massive steeples. So, a more realistic goal for 2026 is that the steeples will be completed to commemorate Gaudí’s death.

In 2017, the architects claimed that the actual end date is closer to 2032. Only time will tell!

Although the church remains unfinished, since 2010, worshipers have been able to attend mass in the basilica! La Sagrada Familia was consecrated by Pope Benedict XVI in 2010. If you’re interested in attending a mass yourself, there is an open ceremony performed every Sunday and every Catholic holy day at 9 am.

Now you know a little bit more about the history of La Sagrada Familia in Barcelona! If you get the chance, I definitely recommend that you check it out, both the outside and the inside! Plus, the area where you’ll find the church is also excellent for wandering and snacking on tapas. Just one word of advice: La Sagrada Familia is Spain’s most visited monument, so you’ll want to make sure to get tickets in advance!

If you want to explore Barcelona with one of our expert guides, click here to take a look at all of our walking tour options and to make a booking! We offer a special Gaudí tour that you’re sure to love.