A Brief Guide to Bangkok’s BTS and MRT Transportation Systems 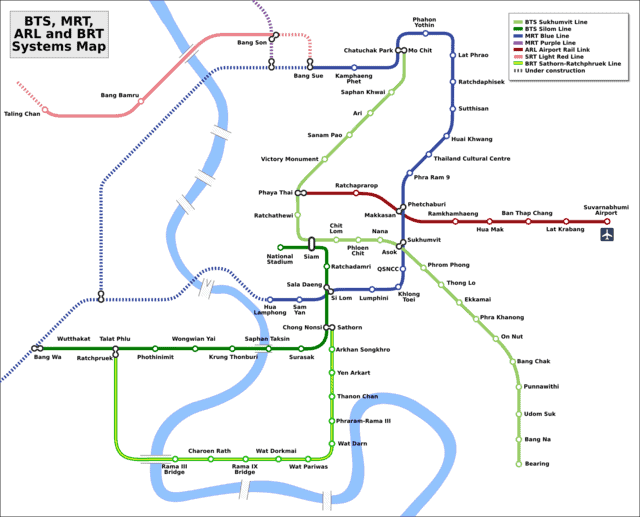 Image by globetrotter from creativecommons.org

A Brief Guide to Bangkok’s BTS and MRT Transportation Systems

Bangkok is a constantly expanding city that is not necessarily one of the easiest ones to get around in.

The Thai capital is a densely-populated city with a reputation for being one of the most congested in the world. So it’s good to know that there are other methods of making your way around Bangkok other than by road.

Bangkok has had something along the lines of a ‘metro’ system for close to 2 decades now. It is a still-expanding mass transit system that will definitely help you get around the city a bit more quickly.

This includes the BTS line (also known as the Sky Train), which can be seen in most major parts of the city running up above the congested roads which are often at a standstill. 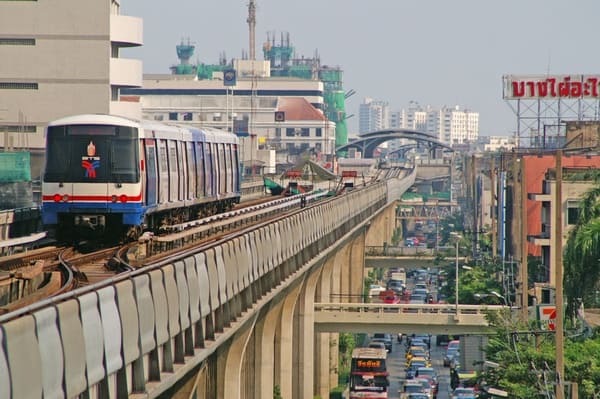 Then there is the MRT subway line. Both of these systems are constantly being extended, and there are several hub stations across the city where the two different systems interconnect. These 2 methods of public transportation are probably the easiest and most-used ways to get around the city.

One thing that needs to be first pointed out though, is that The BTS and MRT are independent transport networks. This means that they are not operated by the same company, nor connected in any way other than the fact that the city has ‘interchange stations’ where you can switch from one system to another.

This also means you need to buy different kinds of tickets for each, even if you change between the two systems.

So there is no ‘universal’ travel card in Bangkok that covers all operations. And to make it just that bit more confusing, the BTS extension lines that are constantly being added are also related to a different contractor (which is covered by its own travel card separate from the BTS one). 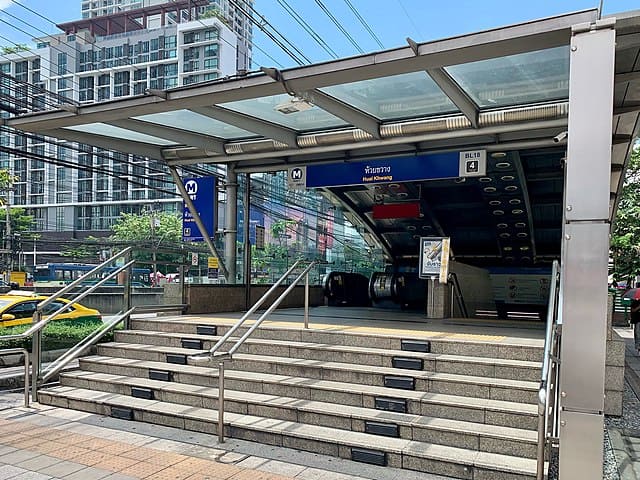 On top of that, there is even another network, the Airport Rail Link (ARL) which is also independent and gain requires its own ticket. This is the train that you can jump on from the airport to take you into the city directly.

Another important thing that you need to know if you are planning to use any of these systems on a trip to Bangkok is that rains on both lines can and do get extremely crowded. So if you are not one for being crammed in like a finely packed tin of sardines, or are inclined towards even slight bouts of claustrophobia, you might want to consider installing the Grab application on your phone. (Check out one of our previous posts on using Grab in Bangkok.)

(TIP: These 2 public transportation options are not yet that family-friendly in terms of pushchairs and prams, and although there are signs above the seating areas stating that seats should be given over to small children, pregnant women, and the elderly, don’t count on this happening!)

In terms of cost and service, it is worth noting that the BTS is actually considered to be well over-priced by the majority of Thais, and often comes under heavy criticism for this alongside the fact that it is prone to breaking down a bit more often than it should do. 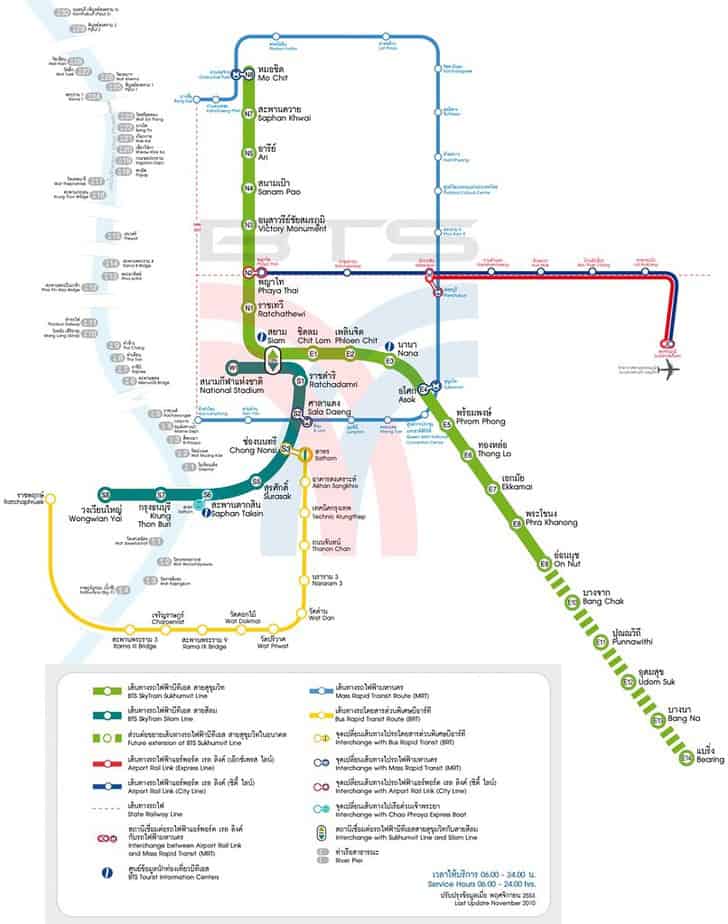 Image by chi227 from creativecommons.org

There are also communication errors and frequent delays. To top all of that, when it rains during the monsoon season the electrically-operated BTS has been known to run anything but smoothly, and sometimes just stops for no apparent reason.

However, many people have little choice but to put up with this due to the fact that they don’t want to spend 3 hours sitting in a traffic jam during rush hour. And if you are a visiting tourist, it’s possible that you won’t actually be on the train for that long.

Most tourists tend to use the BTS Sky Train as it covers all of the central areas of the city, namely Sukhumvit, Silom and Sathorn, and Siam Square. The interchange stations between the subway and the Sky Train also tend to be in some of the main regions of the city, although one of the bizarre things is that sometimes the different systems don’t use the same names for the same stations.

All stations have ticket machines that accept both notes and coins (Thai currency, obviously), and you even get change for the notes. (TIP: Don’t expect any kind of queuing to be in evidence at the majority of these machines.)

If you don’t have any change you will have to queue at one of the counters. (TIP: Don’t expect extensive English language skills from staff.)

To make things a bit easier the Sky Train system operates something called a Rabbit Card, which you can ‘top-up’ either at the counters or even online. This is worth having if you plan on being in Bangkok for any length of time, and using the system a little bit more than occasionally. It will be a real time-saver because the BTS system can get very busy with long queues.

There are currently 2 main BTS Sky Train lines, along with their respective ‘extension’ lines, which are on the outer limits of the central regions and so won’t affect most visitors. 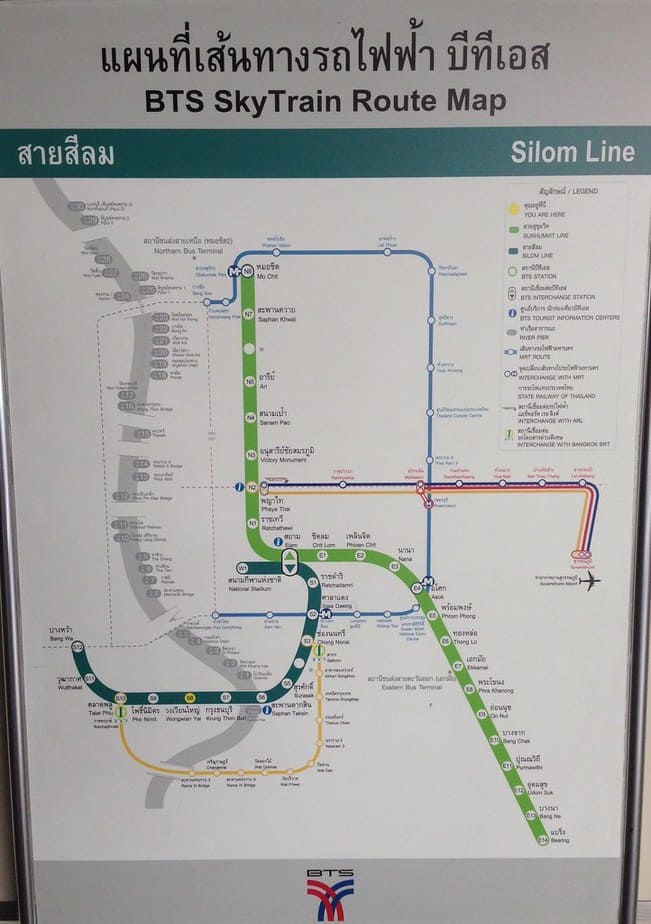 Image by airbus777 from creativecommons.org

There is also a Gold Line, which opened in December 2020, and serves as a connection between the Silom line and the very hi-end Icon Siam shopping mall. The Gold Line has just two stops, ending at Klong San. Apparently there are plans to have this line extended with one more station called Prajadhipok.

You can also get to Icon Siam from other lines, namely by heading to the Saphan Taksin BTS station and then hopping onto the free ferry boat that takes you directly to the mall.

If you want to get to the centre of Bangkok directly from Suvarabhumi International Airport, you can use the Airport Rail Link. You should see the signs for it from the Arrivals area at the airport which will direct you down into the lower levels where you can board the train.

The Airport Rail Link only goes to one station, which is the Phaya Thai BTS station. You can then make your way to other areas of the city using the BTS system if necessary. (TIP: If you have a lot of luggage with you, it won’t be that practical using the BTS.)

If you fancy trying your hand at a more traditional method of transportation in Thailand down towards the river regions of the city, you can change from the BTS to catch a river ferry at Saphan Taksin BTS station. (This is where you can get to Icon Siam from, along with many other areas.)

In fact, the river ferry has numerous stops for tourists. Tha Tien pier is one of the main ones as it is right by the Grand Palace, then a bit further along the Phra Athit pier will drop you 5 minutes’ walk from Khao San Road.

The subway also gets extremely crowded at certain times of the day, and can sometimes be even more claustrophobic than the packed BTS due to the fact that it is underground and has no views to speak of.

There are currently 2 MRT (underground) lines, which again employ a colour coding system. The MRT Blue Line runs underground from Bang Sue to Lak Sang. This is the line that most tourists tend to use as it covers some of the main central locations. 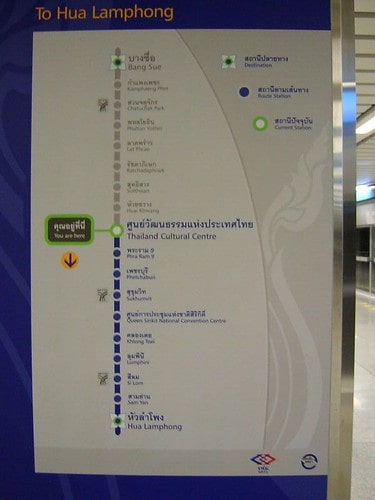 Tickets: The ticket system is similar to that of the BTS with machines, counters, and another card that can be topped up.

The prices are comparable to those of the BTS, if not slightly lower, and although the stations can also be unbearably dense with people at certain times of the day, many Thais seem to think that the service is better than that operated by the one running over the top of the city. 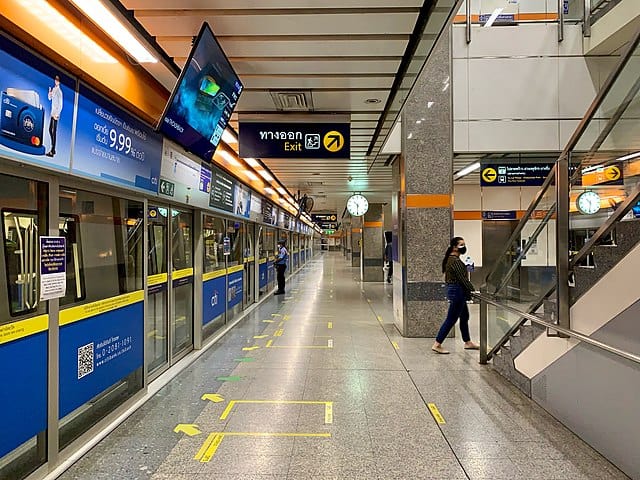 As with the BTS lines, new underground MRT stations are constantly being added to try and stretch the network across to other regions of the city. In 2019, the MRT opened a new station at Sanam Chai, for instance.

This new MRT station is prominent in that it allows tourists easier access to iconic Bangkok attractions and landmarks like the Grand Palace and Wat Po temple.