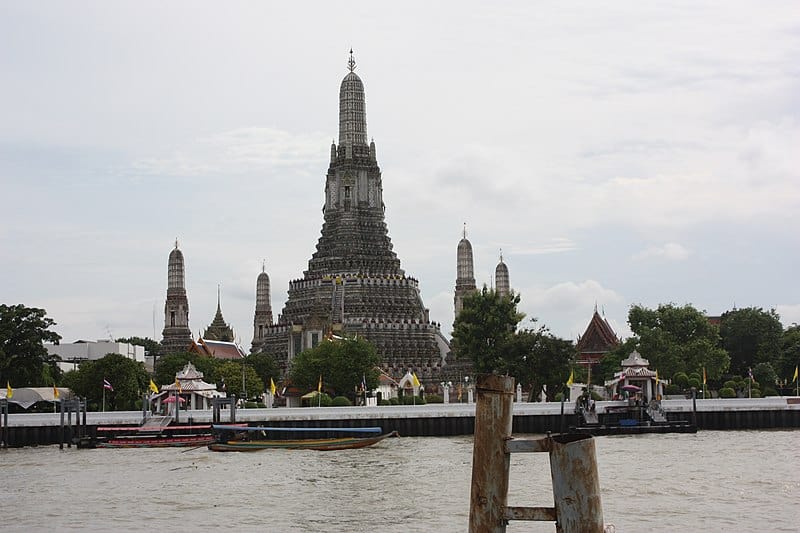 In historical Thai terms, Rattanakosin is the name that signifies the ruling dynasty in the kingdom of Siam in the 18th and early 19th century.

In Bangkok terms, the actual region of the city known as ‘Rattanakosin Island’ is actually a man-made area that is designated as an ‘island’ due to the fact that it is separated by canals on one side and the Chao Phraya River on the other.

The Rattanakosin period of Thailand’s past is deemed historically significant, which is why this particular area of the city is where you’ll find most of Bangkok’s best-known landmarks, temples and various other cultural attractions. 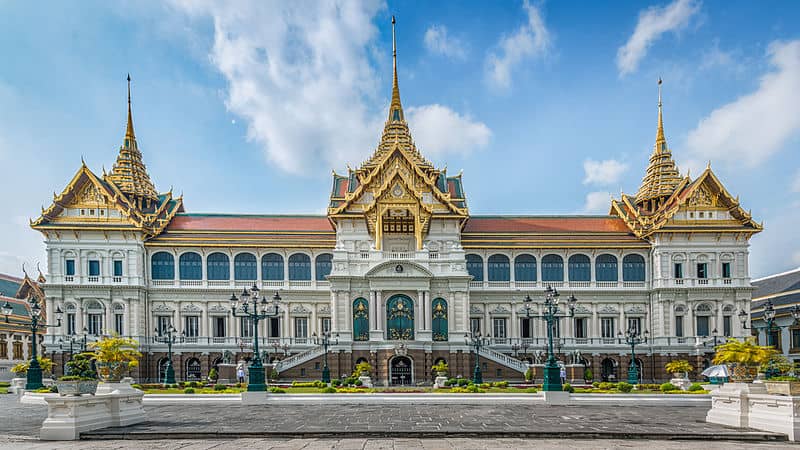 Probably the most famous of the attractions in the area is the Grand Palace, which was actually where the King of Siam resided when the capital was first moved to Bangkok from Ayutthaya. Needless to say, Rattanakosin is featured on the itinerary of the majority of visitors on the Bangkok tourist trail.

This is the region of the city largely referred to as the Old Town as well. It is close to the river, just north of Bangkok’s Chinatown. It is far removed from the modern, over-developed and densely-populated central city areas of Bangkok like Siam, Sukhumvit and Silom.

You won’t find much by way of glitzy shopping malls, more an authentic aspect of the city that has yet to escape the full onslaught of modern development. It is where you’ll find a few interesting and unique features of Bangkok based around or near to the river.

Aside from ancient temples and the riverside scene, this is also the vicinity which includes the famous Khao San Road and the even more famous Ratchadamnoen Boxing Stadium. 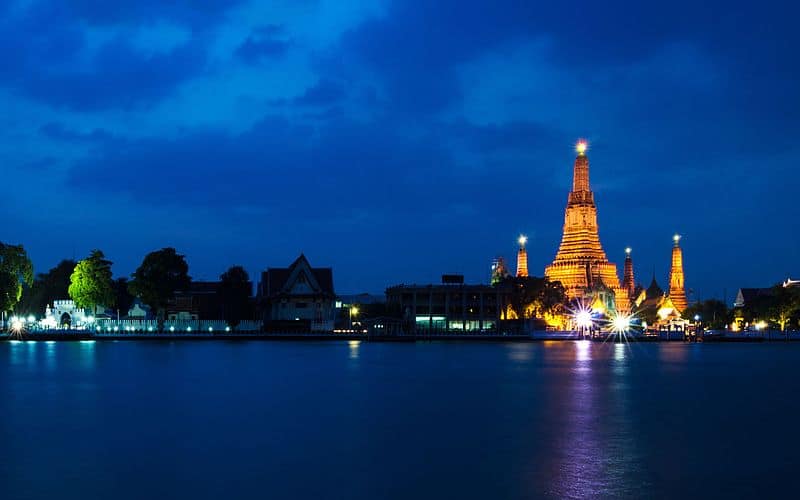 The pavements are some of the best you are likely to find in the entire city, being well-laid and wider than in most other areas. This means if you don’t mind the heat you can take a pleasant enough stroll close to the river between the various attractions in the area.

So let’s take a closer look at some of the various attractions and other amenities in this brief guide to Bangkok’s Rattanakosin Island.

Location and Getting There

Other than going by taxi or car (using the Grab app is recommended for going by road anywhere in Bangkok), you won’t be able to access the area by BTS or subway directly. You can get to Sathorn Pier by BTS and then switch to a River Boat that will bring you here though.

A River Boat is another way to get close to most of Rattanakosin’s attractions via the Chao Phraya River. There are actually a couple of stops that will drop you fairly close to The Grand Palace and Wat Pho (Tha Chang Pier, N9). 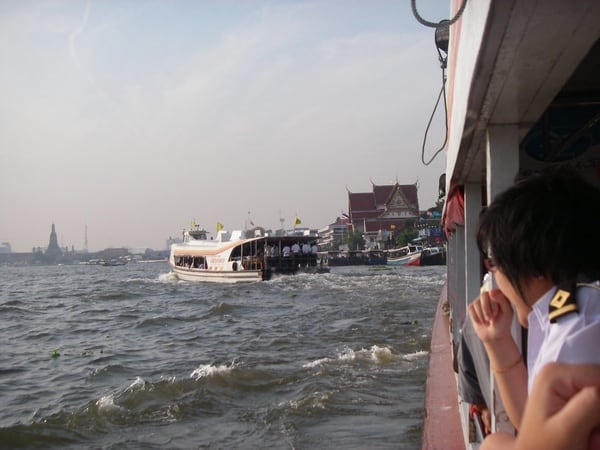 The Chao Phraya Express Boat stops at all of Rattanakosin’s piers, and the Sathorn Pier (CEN) is where you’ll also find the BTS station.

Some of the Main cultural Attractions in the Area 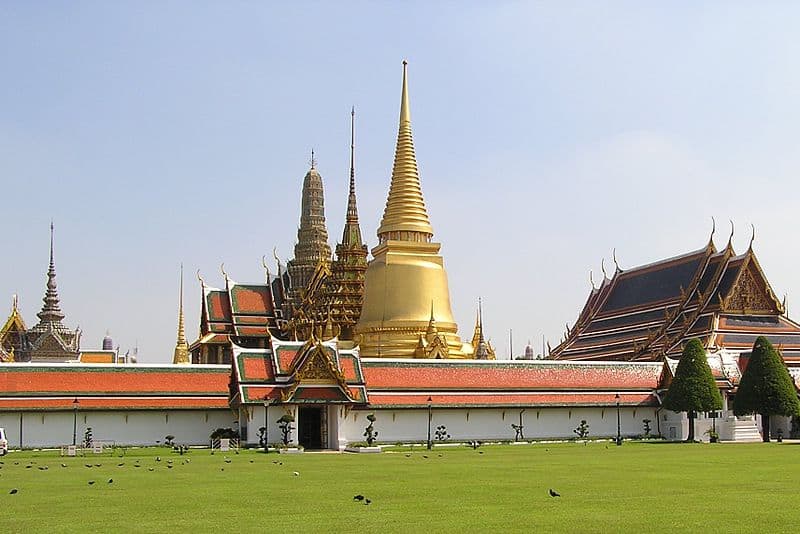 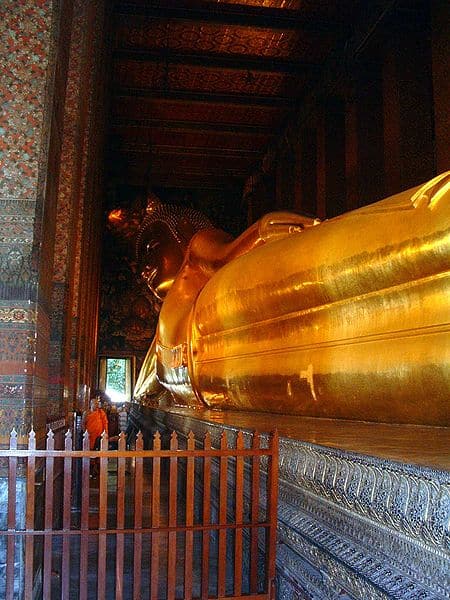 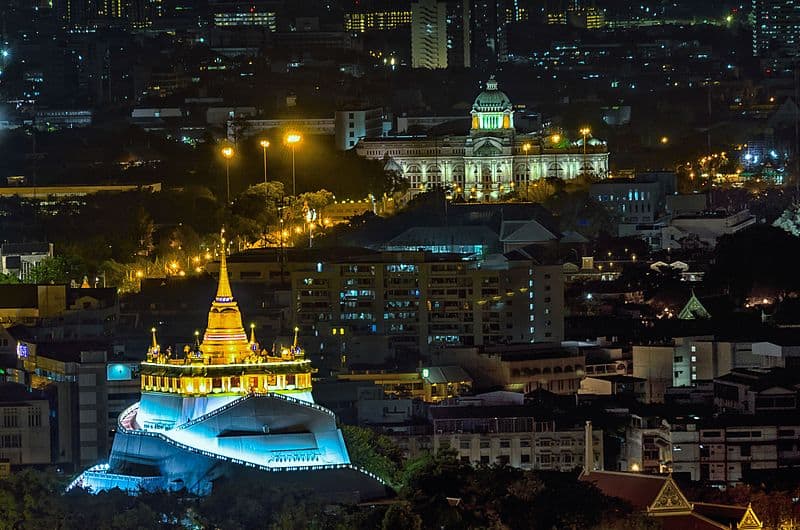 Other Attractions in the Area 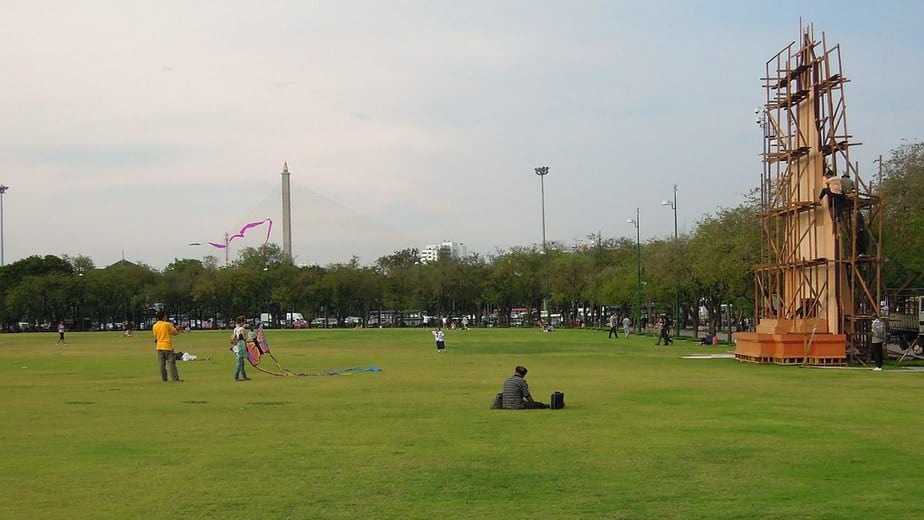 Image by david mcelvey from creativecommons.org 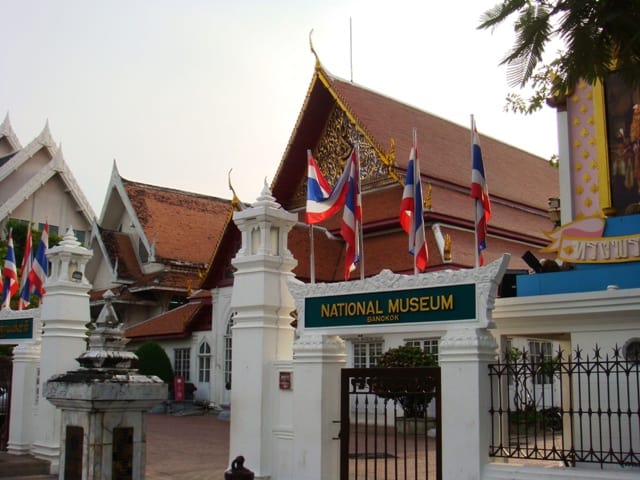 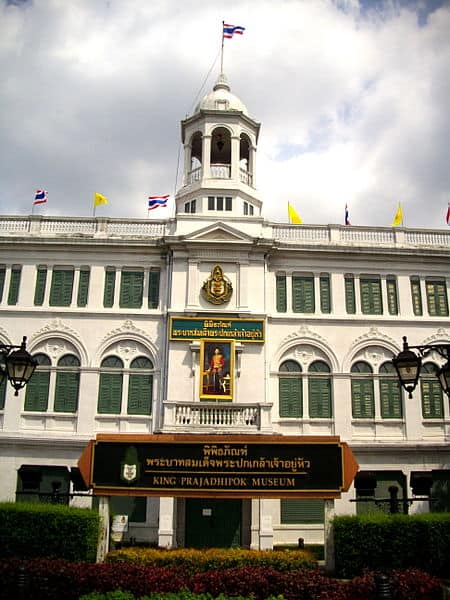 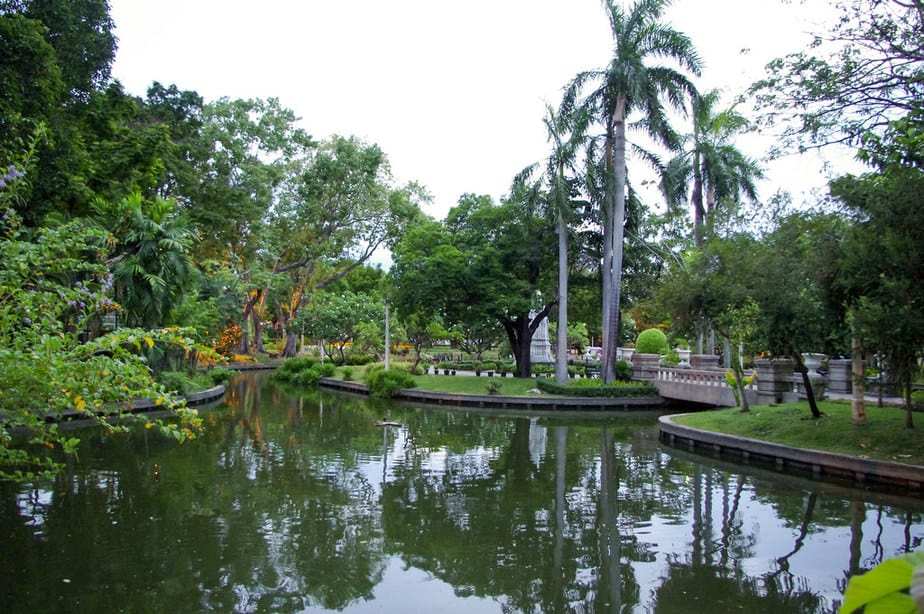 Image by aaron toth from creativecommons.org 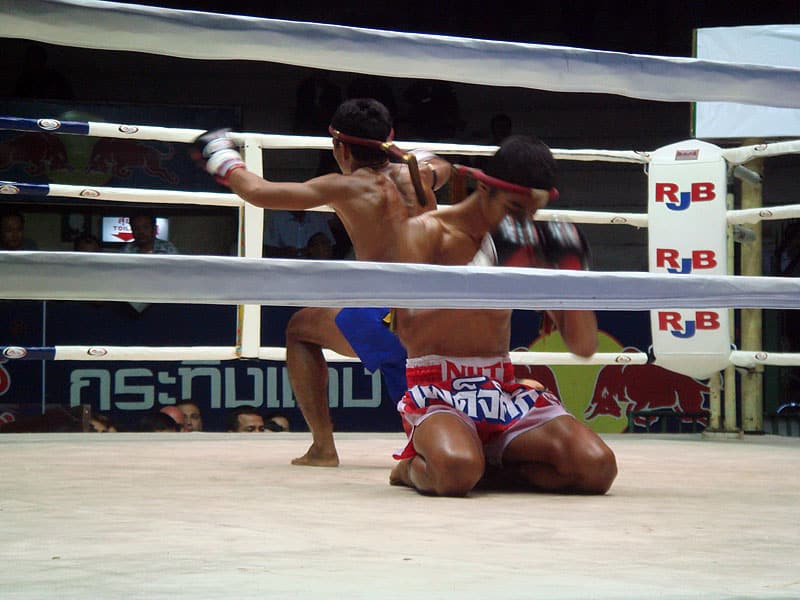 Certainly you won’t have a problem finding something good to eat around the Rattanakosin area. Like most regions of Bangkok there is always plenty of street food to be found wherever there are people.

You can also find some exquisite riverside restaurants with decent views of the river and its various features on the skyline. And this is also the area in which it is possible to find a few well-established places selling various Thai classic dishes such as Pad Thai Phatupee’s which has been around for more than 50 years.

You’ll also find a decent range of impressive cafes and coffee shops in and around this area, some of which have been around for a while and a fair few trendy-looking, more recent additions.

Either way you won’t be stuck if you fancy a bite to eat, a good coffee, or both when you are making your way around the vicinity of Rattanakosin Island. 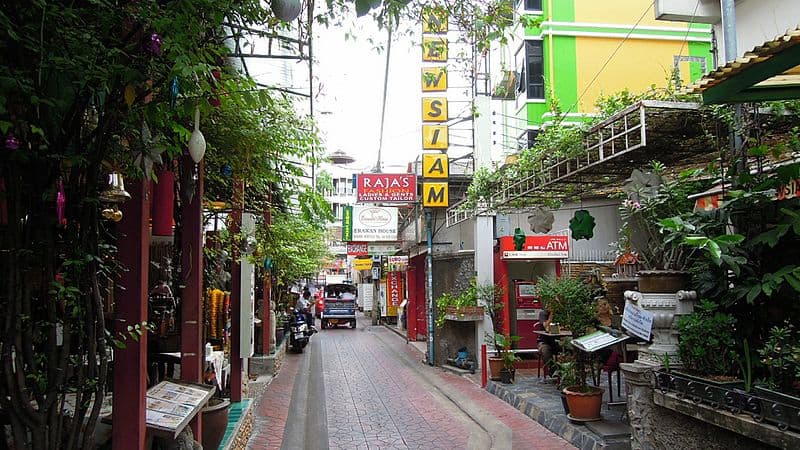 You’ll find plenty of accommodation options in and around this area if you fancy staying here on a trip to Bangkok.

Whether 4 and 5 star hotels overlooking the river and Wat Arun are your thing, or budget hostel lodgings — it’s all here in this neighbourhood. The range of accommodation options are always growing and changing in Bangkok, not least of all in areas frequently visited by tourists.

So you have all the usual top range choices like the Sala Rattanakosin and the Riva Surya Hotel in close proximity to all the area’s attractions. You also have a range of Boutique Hotels, Guest Houses and Hostels, not to mention a growing range of Airbnb-style apartment rentals that are increasingly becoming a popular choice for Bangkok visitors.

Check out the Golden Mountain Hostel, The Region Hostel and Au Bon Hostel if you are on a budget, or Villa Phra Sumen and Fueng Nakorn Balcony for a slightly more budget, 3-star hotel option. 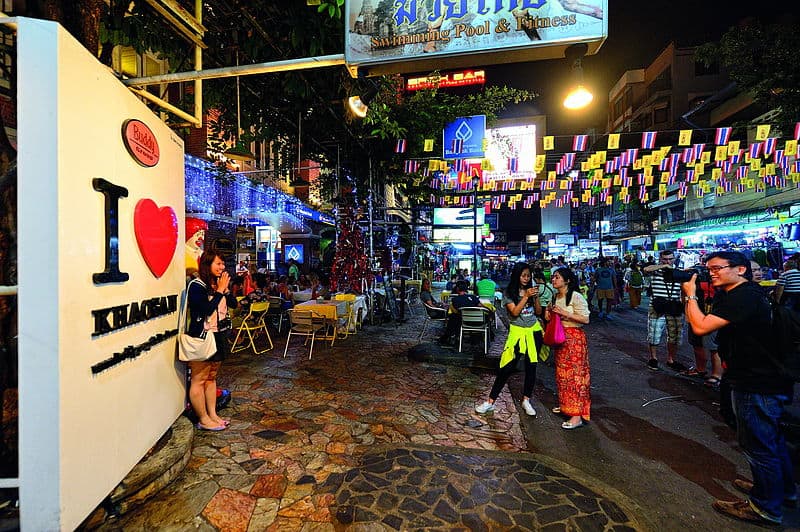 If you are looking for something interesting to do of an evening in the area, it is worth noting that the majority of Rattanakosin’s nightlife is found around the Khao San Road just a short walk from Ratchadamnoen Avenue. Drinks are reasonably cheap, although the bars are usually crowded with tourists and a smattering of Thai locals.

Phra Athit Road, may also be worth checking out just to the north of Khao San and many of the area’s best bars, restaurants and other venues can be accessed during operation hours of the boats (until around 6 pm) from Phra Athit Pier (N13).