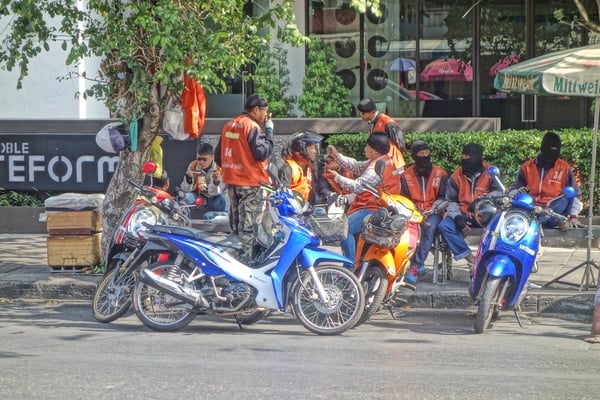 If you’ve ever seen anything about Bangkok and wondered at the guys on motorcycles in the orange vests, then this post is for you.

Maybe you’ve already been to the Thai capital and seen these hordes of orange vests and motorcycles that seem to occupy virtually every street corner of the city, but have not had the experience of using their services. 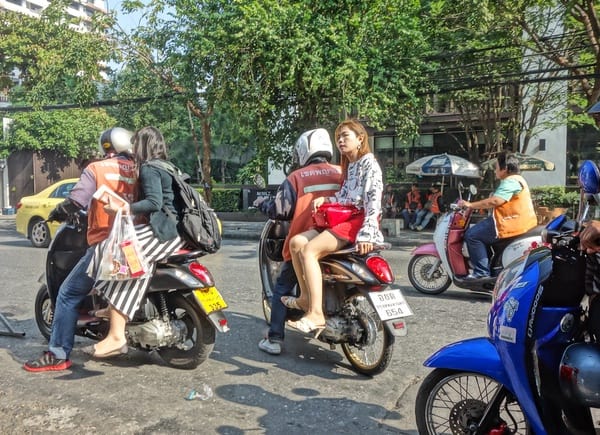 The world of the Bangkok motorbike taxi,  ‘wing moto-sai’ or even ‘wing mo- sai’ as the Thais call them (basically translated as motorcycle runner), gives many insights to the city of Bangkok and its culture. And if you think the idea of motorbikes for taxis sounds odd, then you’ve never experienced the thrall of congestion and chaos that is the Thai capital.

There are apparently more than 100,000 motorcycle taxis in Bangkok, working from around 6,000 designated spots. They are loved by some and loathed by many, although most agree on their necessity in a city like Bangkok. And there are a variety of reasons for people’s opinions on them, but as with anything in Thailand, there is more than a fair share of complexity to this.

Much of the working population of Bangkok lives in condominiums or apartments that are situated deep into the backstreet network of sois off the main road. The further back you are from the main road and the local amenities, the cheaper the rent. Which is where the wing mo-sai come into their own, and where a vast majority of their trade comes from.

To be fair it’s an arduous gig for many of them, who, as uneducated individuals from the rural provinces, have few other options when it comes to making a buck or two in the city. Early starts, long days, and late nights are the norm, as well as hazardous roads, weather, and high levels of pollution. 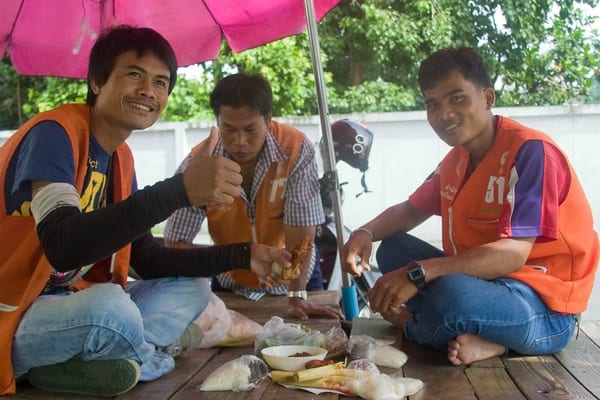 The Emergence of Motorcycle Taxis in Bangkok

There were apparently a few main factors that led to the emergence of the moto-sai during the early 1980s.

One was (and still is, unfortunately) related to the millions of young, largely unspecialised (and poorly educated) rural migrants constantly flooding into the city looking for some means of income virtually unavailable to them in the provinces.

These are from the very same societal group that has provided the city with cheap labour in some form or other since around the 1950s. And with the rapid expansion of the city the transportation options became noticeably limited quite quickly, leaving something of an opening.

The third reason was that Bangkok (and Thailand) began to be flooded with affordable motor cycles, as well as various means of obtaining them (i.e. hire purchase). And on top of that, the ever-growing and increasingly chaotic maze of seemingly disconnected,  narrow sois made motorcycle taxis pretty much a necessity for even getting close to any other public transportation in the city.

The freedom of movement in the city (as well as driving style and road sense) is unique to the motorcycle taxi riders, and most people would agree that they provide something of a decentralised but functional transportation and delivery infrastructure. 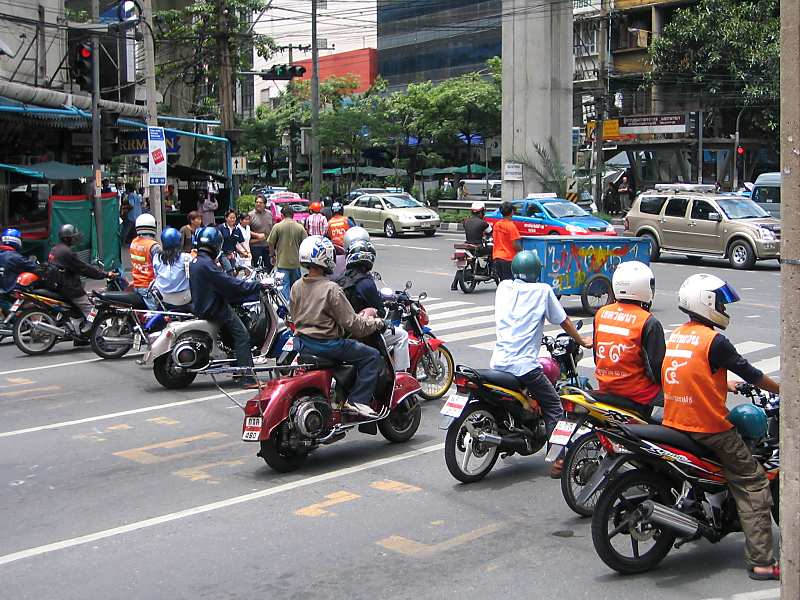 So the obvious advantage of the motorcycle taxis over other forms of transport is their speed and ability to bypass Bangkok’s constant traffic jams. The drivers tend to spend most of their time in a relatively limited area of town near their station, so they usually have a pretty good knowledge of the nearby backstreets, including all the shortcuts.

They also know the local amenities, apartments, restaurants, and bars far better than taxi drivers who work on a broader basis and are not averse to getting completely lost on occasion.

If you are a visitor to the city and fancy your chances with this mode of transport, then it’s worth knowing that the average motorcycle taxi driver does not have that much contact with foreigners, except in the central areas of the city. This means their English skills are either quite limited, or simply non-existent, and one of the reasons for many a miscommunication.

But as long as you can state your destination clearly (that is, clearly in his terms) you shouldn’t have too much difficulty. These guys are not notorious for scamming on prices as they are fixed (they are on a board next to the taxi stand, but usually in Thai), although you wouldn’t necessarily know that unless it was a regular journey.

But that doesn’t mean that someone might try it on occasionally either with someone not from the area.

In many ways it’s simply a question of economics. And culture. And education. And these are the 3 things that usually lead to the most conflict between the various echelons of society in Thailand, which is why some quarters of the community wouldn’t dream of sitting on one of these vehicles. The vast majority others have little choice. 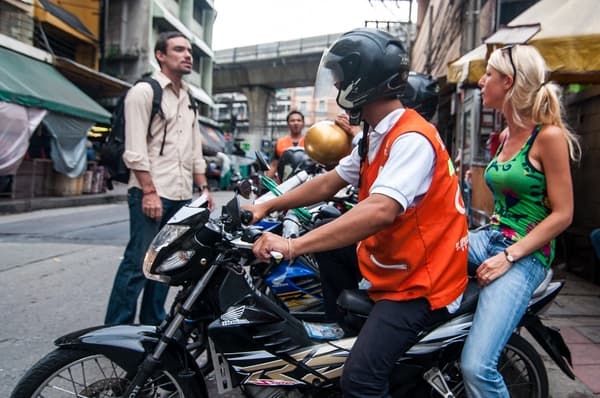 To use one, simply walk up and state your destination to the one who looks like he’s next to go (using a Thai accent if necessary). During busy periods you can see them waiting in line, sometimes with their engines running and their helmets on.

If you are not sure then try to find out the price beforehand, and bear in mind that the driver will generally return to his station after dropping you off at your destination, so he has to figure the return journey into the price too if it’s not one of his usual fares.

Longer fares are sometimes up for negotiation, and generally they work out cheaper than four-wheeled taxis. Prices are cheaper for short distances and generally fixed, although they can work out more expensive for longer trips, especially if there is likely to be traffic.

Bizarrely enough, it’s not entirely uncommon for many a travel blogger to list one of the ‘must try experiences’ in Bangkok as hopping on the back of a motorcycle taxi – although that is far from the intention of this particular post.

They do have their fair share of accidents, mainly due to the fact that they ride like there is no tomorrow, knowing that the sooner they drop off one fare, the more chance they have of collecting another.

They are also notorious for ignoring pretty much every traffic sign and signal, including traffic lights. The main aim is to keep going forward, whether that be on the wrong side of the road facing oncoming traffic, lane-hopping in busy rush hours, or driving on the path or any other available terrain in order to avoid stopping. 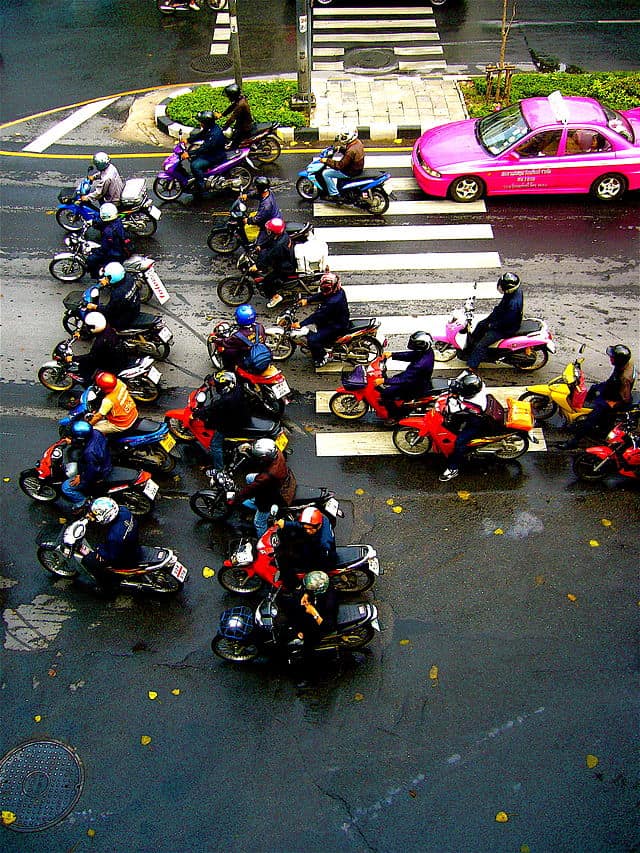 It’s hardly surprising then that motorcycle taxis have something of a reputation for being dangerous, and it is not entirely unfounded. It is certainly not recommended to use them in rainy conditions when accidents occur frequently.

Another very common problem in Thailand is the risk is of drivers or passengers unexpectedly getting out of cars or taxis without noticing the motorbike that is overtaking it (often on the inside). It is a bizarre but frequent problem in Thailand that occupants of cars don’t even bother to look before opening the doors!

Many visitors to Bangkok don’t realise that helmets are a legal requirement for riding on a motorbike in Bangkok. This is probably because there are simply so many people without them, including the taxi drivers.

Actually they should be provided by the driver, but this is not always the case. They might sometimes offer one, even a borrowed one, for a longer trip, although it’s likely something that won’t give you much protection anyway in the event of an accident. (No helmet safety standards in Thailand!) 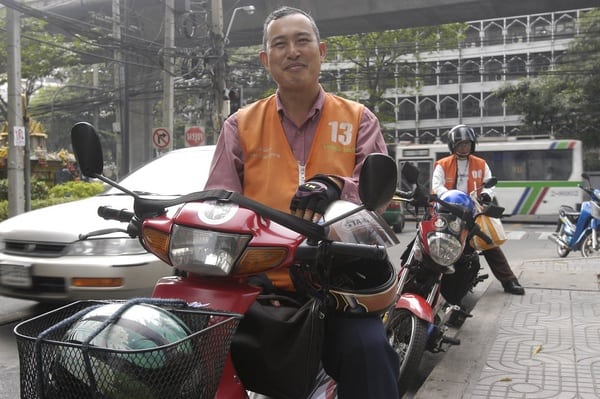 Yet it’s always worth considering that if caught by police looking for easy targets, it is you (not the driver) that faces a fine of something like 200B – 500B.

Where to Find Them

Unlike four-wheeled taxis, the motorcycle taxi drivers don’t generally cruise around looking for fares, but congregate at their various ‘stations’ the city, where there is generally a ‘queue’, to make it fairer for them.

These stands can be anywhere where there’s a substantial amount of residents or passers-by, such as outside department stores, supermarkets, BTS and MRT station exits, and at the entrance of a long soi.

There’s no doubt that if your sole priority is getting to your destination as fast as possible then a motorcycle taxi is an occasional option. Unless you find yourself working in the city and not living close to a main road or other form of public transportation, in which case you’ll have to use them every day for short trips. 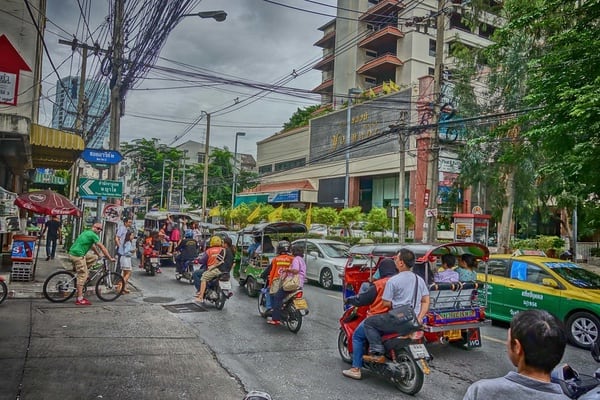 So the moto-sai is certainly an integral part of the Bangkok scenescape, however you look at it.

They are something of an ‘acquired taste’ to the minds of a lot of people, with their seemingly brusque attitude and somewhat unique methods of navigating the landscape.

But in a city that developed with no obvious plan of logic and seems, even now, to be extending itself by ‘add-ons’, the motorcycle taxi serves a definite purpose for anyone unwilling or unable to use their own transport on the congested madness of the Bangkok roads or live next to a BTS stop.