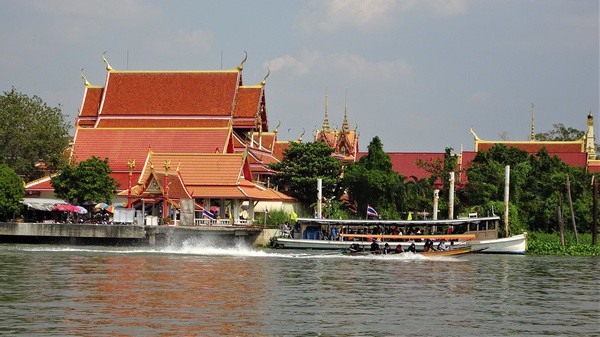 Love it or hate it, Bangkok is a lot of concrete and a lot of people. There are some wonderful and impressive green areas by way of the impressive parks in the city, but sometimes you get the feeling that there is no escape from the oppressive density of the capital.

However, there are a couple of options that are ideal for day trips out of the city that will give you the feeling you are in fact nowhere even close to a capital. One of them is Bang Kachao (which we covered in a previous post), and the other is Koh Kret. 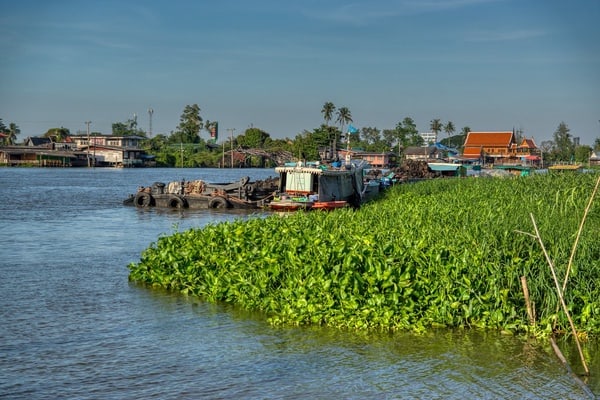 In the next province along from Bangkok, just on the outskirts of the capital about 20 km to the north, you can find Koh Kret. This translates as ‘Kret Island’ although it is neither the traffic variety, or the ‘castaway’ variety of island.

It is, in fact, an actual island village in the middle of the Chao Phraya River.

But if you are thinking white sand and clear-watered beaches – well, it isn’t exactly that either.

So what we have here is basically one of those ‘man-made’ islands that tend to pop up in Bangkok now and again, and this one in particular makes for a decent day out if you are in the city.

Koh Kret is an ‘island’ that was formed in 1722 almost by mistake, when the construction of a canal, now known as the Om Ket River, was being undertaken.

Considering that the waterway networks in and around the city served as the main means of transportation around that time, the canal had to be widened quite a few times to accommodate growing volumes of traffic.

This process eventually resulted in a chunk of land being left behind virtually in the middle of the river. It soon began to become inhabited by people who saw the obvious opportunity, ad this is what we know today as Koh Kret. 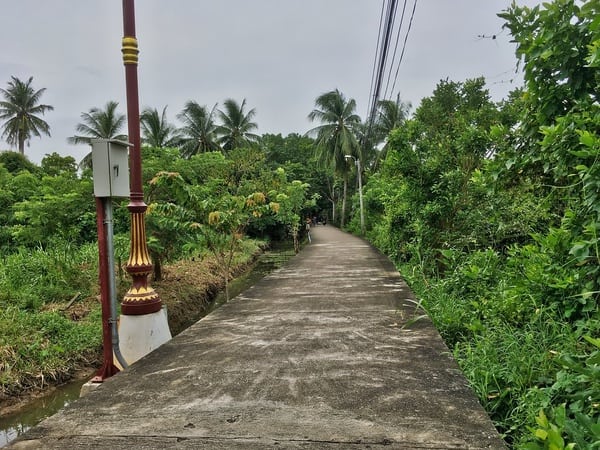 The area became of point of settlement for mainly Mon people who came from the central plains of Thailand, and many of the families living there today still originate from those same ancestral lines.

Getting to Koh Kret

As Koh Kret is on the river, getting there by boat is probably the most logical way to access the island. 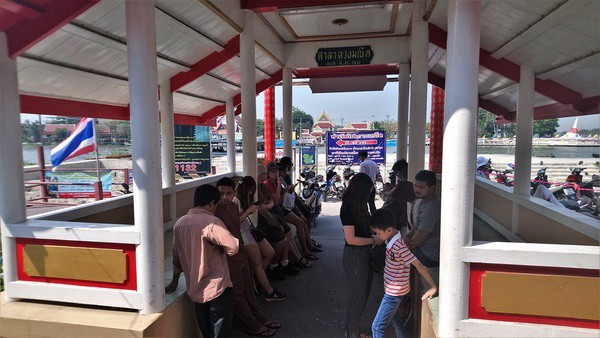 If you want to take the adventurer’s route but you are not actually staying next to the river, you may need to get to the Saphan Taksin BTS station first. This stop is right next to the Central Pier on the river.

From this pier you can jump on the Chao Phraya Express Boat, on which you can get all the way to Nonthaburi without having to change. In fact the Nonthaburi stop is the furthest northern station at, and the cost to reach there is minimal.

Once you are at Nonthaburi, you just need to buy tickets for the long-tail boat that goes the short distance across to Koh Kret Island. 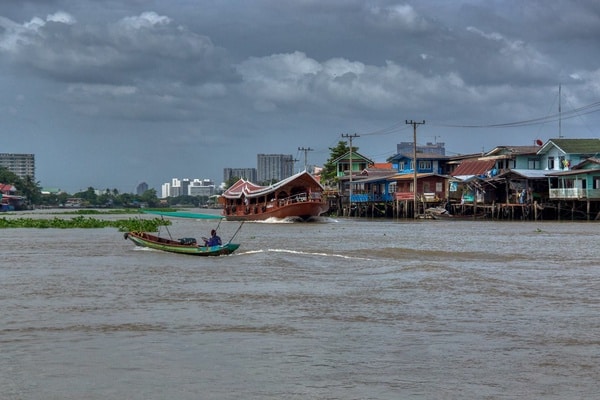 If you fancy a bit of adventure you could actually get there by bus – but don’t expect to get there quite so smoothly (check out our previous ‘brief guide to Bangkok’s Buses for more info on that).

Bus numbers 166 and 104 go in the direction of Koh Kret, and you need to get off at Wat Sanam Neua Temple. From here, you just need to take a ferry across the river to the island.

What to Do in Koh Kret

Koh Kret locals are fairly used to catering to both local and foreign tourists, and you’ll be pleased to notice that once on the island – which is, incidentally not all that large – that are a fair few signs and maps that will help you to find your way around.

It is actually fairly easy just to follow the lines of the walkways to get around the island without missing too much, and it is highly unlikely that you’ll get lost here.

The island is laid out in a kind of square in shape, and there’s only really one main ‘road’ that stretches the entire the circumference of the island. Thankfully there are no cars though, even though you’ll probably encounter the odd motorbike or two. 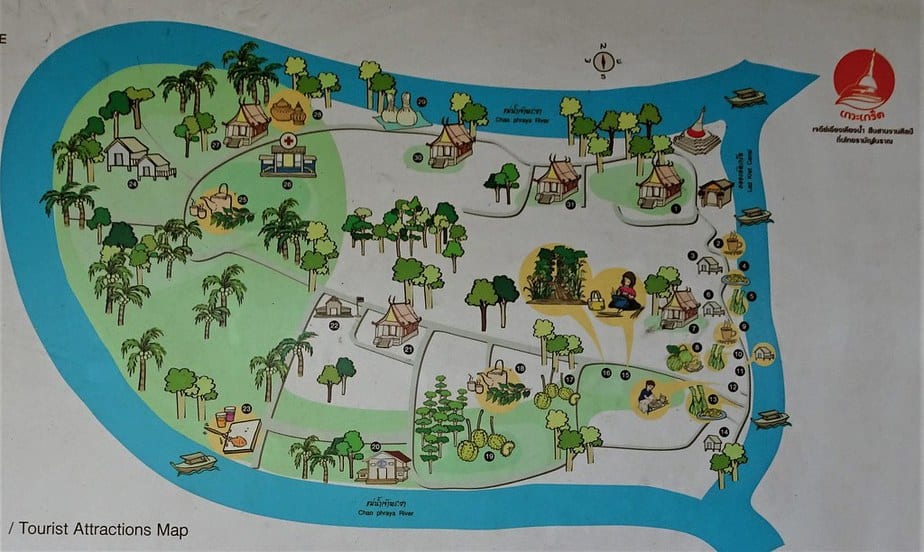 Image by maxrichard from creativecommons.org

Most people walk around Koh Kret, which isn’t actually that difficult to do. There are a few bicycles to rent though if you fancy it, which is not a bad way to take in the island.

The best time to go is the weekend as during the week you may find that nothing too much is actually open on some days, and that it’s just basically the locals going about their business.

The weekend is the time when many vendors take to the lanes and small streets around Koh Kret. This is particularly the case around the temples, and you’ll find them selling food and all sorts of other items.

As is the case with Bangkok’s ‘green lung’, Bang Kachao, Koh Kret is a popular at weekends with local Bangkok residents who want to escape the thrall of the densely-populated central city regions and enjoy a change of scene.

That’s not to say that you can’t visit on other days of the week, but it will certainly be much more on the quiet side, and minus the market.

The market takes up most of the eastern side of the island, with vendors lining the passage for more than a kilometre. This means there are plenty of snacks and sweet dessert-type items like foi tong and other food items to try or buy, and there lots of little shops selling various items to check out.

You’ll find vendors around the island selling all kinds of different items, some of which make for great souvenirs. Some sell the clothes and fashion accessories, and others sell street food-type fare, various drinks, and even fresh vegetables. The market is usually open between around 9am and 4pm on weekends.

One of the most famous aspects of Koh Kret Island is the pottery, which is strongly influenced by the Mon style and culture. This is an art form that has been in existence here since the inception of the island.

The different sections of the pottery village are where you can see people making pots and other crafts, and you can get an insight into the process involved. There are also plenty of small shops and stalls in this region of the island selling artistic little items and all manner of pottery produced there.

Out of the market

The local life and culture is slightly different from what you are likely to find on the streets of Bangkok. It’s somewhat more slow-paced – pretty much what you might expect from a community that doesn’t have too far to go and all the time in the world to do it in.

The elevated concrete pathways that run through and around the island actually make the place quite enjoyable to walk or cycle around – unlike the majority of Bangkok streets and pathways. 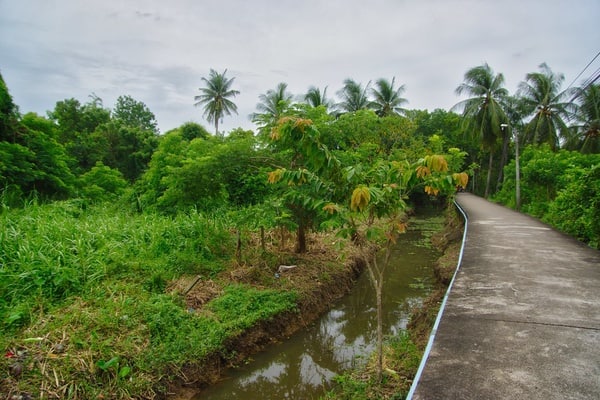 There are various solitary stalls or carts selling random items in and around the network of streets and alleys. Although you can easily wind your way round the main walkways of the island in half a day or so, in the less-visited areas you can find people selling all kinds of things. You may come across lone vendors with fresh fruits and vegetables, or a few lesser-known home-made Thai desserts and snacks.

This is a great opportunity to witness the authentic local lifestyle and culture of the island when you bear in mind you are literally walking right past people’s homes. Also you are right in the midst of small, local temples, shops, and restaurants, many of which exist as much for the benefit of the island’s inhabitants as they do for visitors. 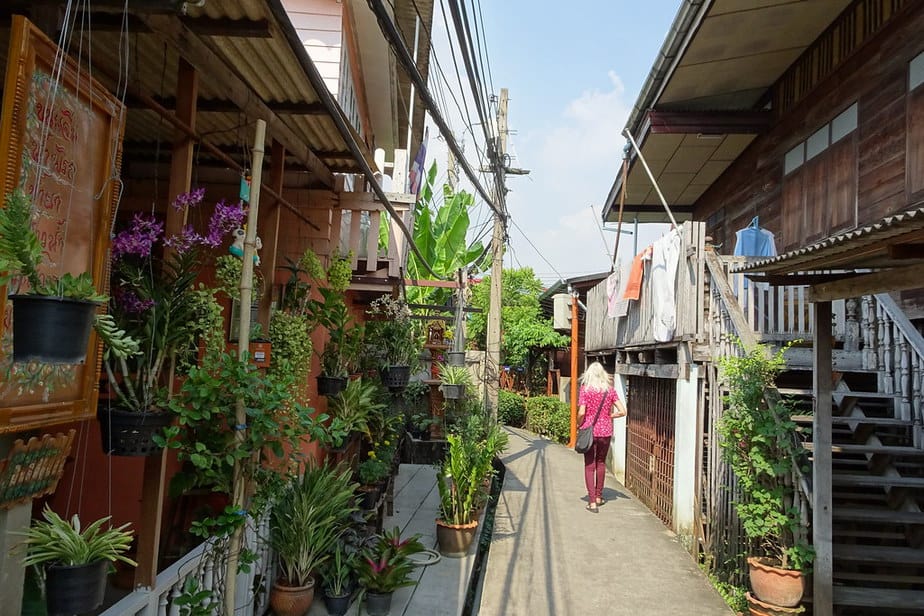 Accommodation on the Island

There isn’t actually that much along the lines of accommodation on the island, mainly because it serves as more of a day trip location for many visitors.

You certainly won’t find any hotels here, but there are a few local-style home-stays in operation such as Baanya Homestay Koh Kret and Cast Away Homestay. It could actually prove to be a pleasant day or two out of the main thrall of the city for anyone looking for a more authentic and unique Thai experience.

In fact, if you’re looking for an enjoyable day trip from Bangkok that’s not actually too far out of the way, Koh Kret is ideal. It’s a great place to enjoy a slightly more peaceful and laid-back vibe than anything you are likely to encounter wandering the concrete humidity of the inner city.

It’s good for couples, families, or solo travellers to be able to see something authentic and untouched by the ever-developing modern surrounds of Bangkok, so that you can even forget you are anywhere close to the city when walking the narrow alleys and streets at the leisurely pace that fits the island.