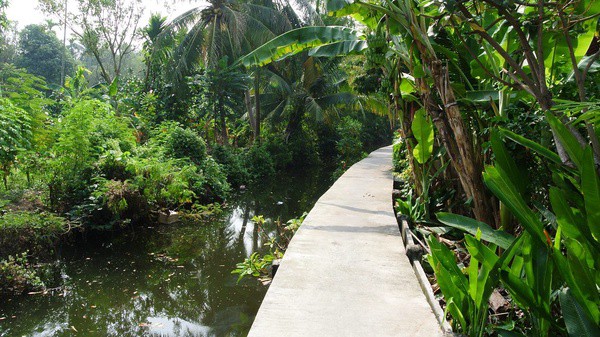 It’s fair to say that Thailand’s capital city is not exactly the ‘greenest’ place on the planet.

And that is true in all contexts of the word, i.e. ‘environmentally-friendly’ and, well…green.

Granted, Bangkok does have some amazingly well-kept parks, which are indeed tropical green havens in the middle of the otherwise concrete chaos. You can easily spend at least half a day in most of these parks.

And some of them are so impressively vast that you may forget that you are in the middle of a built-up and densely-populated capital SE Asian city at all. 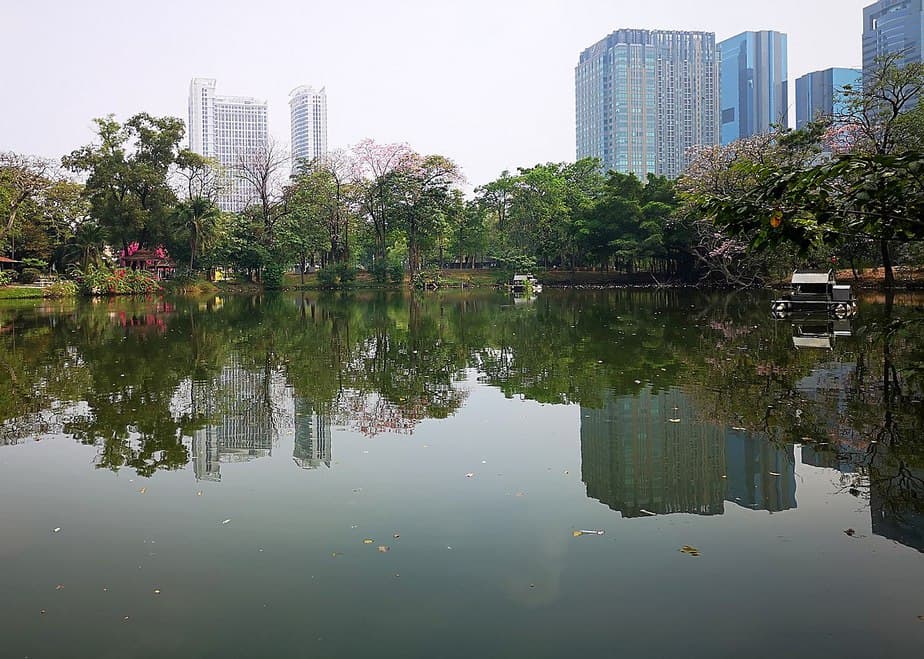 But once outside of the park walls it soon becomes blatantly obvious that there is a whole lot of concrete, traffic congestion, and myriad forms of chaos. And this is why many Bangkokians in the know love to head out to the area just outside of the city known as the ‘Green Lung’ of Bangkok whenever the opportunity arises.

Yes, the parks in the city are great, but this area is on a different level when it comes to natural greenery and the sense of ‘having some space’ which is largely non-existent in Bangkok.

The actual name of the area known as the Green Lung is Bang Krachao. You can actually see the area from the higher floors of some buildings like hotels, office blocks and condominiums along regions of the Sukhumvit Road.

Most travellers and visitors to the city do remain blissfully unaware that this area even exists though, although plans have been in place for a while now to make it more of a tourist destination. And a worthy one it is too.

Bang Kachao is a popular weekend destination for many from the city, and it offers the opportunity to get outdoors without dying from humidity, crowds, or both. 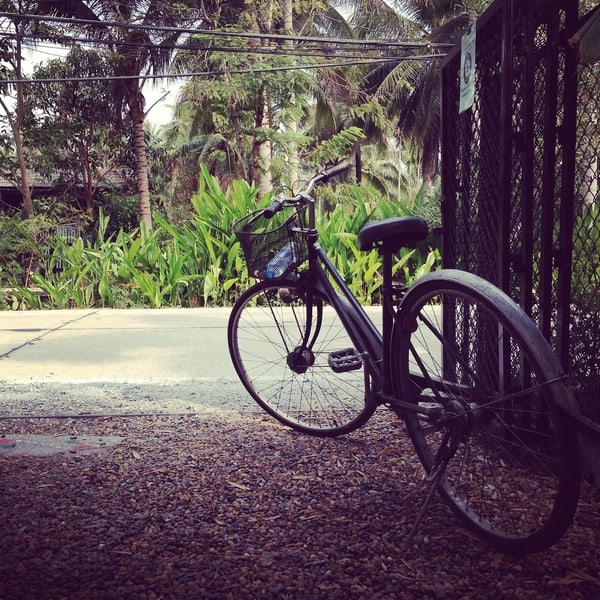 It has long been a hot spot for cycling enthusiasts who prefer not to risk their lives on the Bangkok roads, and the narrow streets in the region have cycling lanes on both sides. There are also lots of other activities to indulge in though, whether you are the active type or not.

Bang Kachao is a large, green expanse covering around 12,000 rai of land. It comprises farmland, forest and jungle, and a residential population.

This place really does warrant the term ‘urban oasis’, and gives some insight into what other regions of what is now the capital must have been like before the ever-increasing onslaught of modern development took hold.

Bang Krachao is actually an island, but not exactly in the way of what you might consider your typical island in Thailand. This is actually a man-made island located in the Chao Phraya River, and as it turns out is not the only one (check out our posts about Rattanakosin Island and Koh Kret in Bangkok). 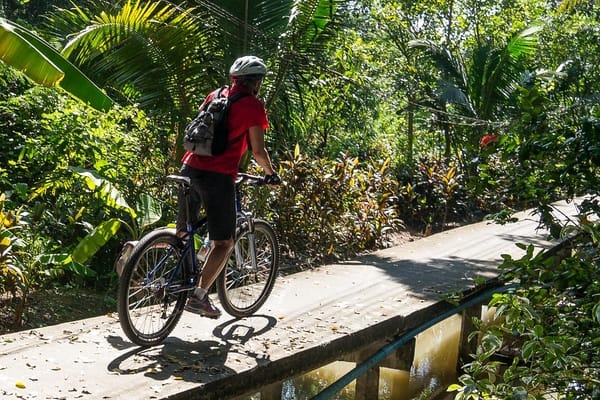 You’ll hear this place referred to quite frequently (by those who are actually aware of it) as the Green Lung of Bangkok due to vast expanse of trees that is comparably larger than any other ‘green’ area in the city.

This is considered by many to be an immense help in battling the city’s air pollution. There are thousands of mangrove trees in and around the island’s boundary, and inside it is the closest thing you’ll get to being in the jungle without actually being in it.

How to Get to Bang Krachao

You can access Bang Krachao by a short ferry ride across the Chao Phraya River. The piers on the Bangkok side of the river are located at Chong Nongsi, Bang Na, and Klong Toei, and the first two are within reach of BTS stations of the same names.

The ferry boat crossing over the Chao Phraya River departs every 15 minutes or so, and the tickets are very cheap.

Getting around Bang Krachao

As Bang Krachao is something of a cyclist’s haven, this is undoubtedly the best way to get around. Even though you’re in a green area it will of course still be hot and humid, although nothing like when stuck in the middle of the city’s concrete central regions. 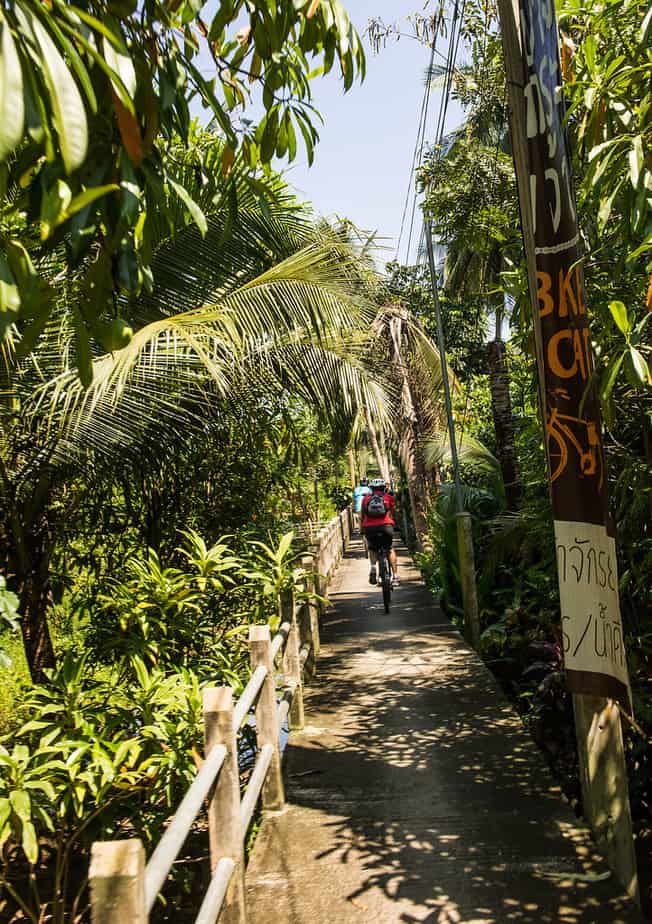 Being on the river, Bang Krachao has a pier, and you will find a bike rental service here, as well as at various other points like the popular spots of Bang Namphueng Floating Market and Wat Bang Namphueng Nok. It’s not expensive by any means to rent a bicycle, and will cost somewhere in the region of 50-100 baht for the whole day.

If cycling doesn’t sound like your idea of fun though you’ll still find the obligatory motorcycle taxis in the area who can take you from stop to stop.

Boat trips are also available if you fancy a leisurely trawl around the region by water. Trips along Klong Phae Phatthana are available daily at Ban Klang Suan Bang Ko Bua. The tours normally operate between 8am and 5pm and cost somewhere in the region of 100 baht per person.

What to Do in Bang Krachao

There are a variety of things to do and see if you are coming to Bang Krachao for reasons other than indulging in some leisurely and quality cycling time away from the thrall of the city. 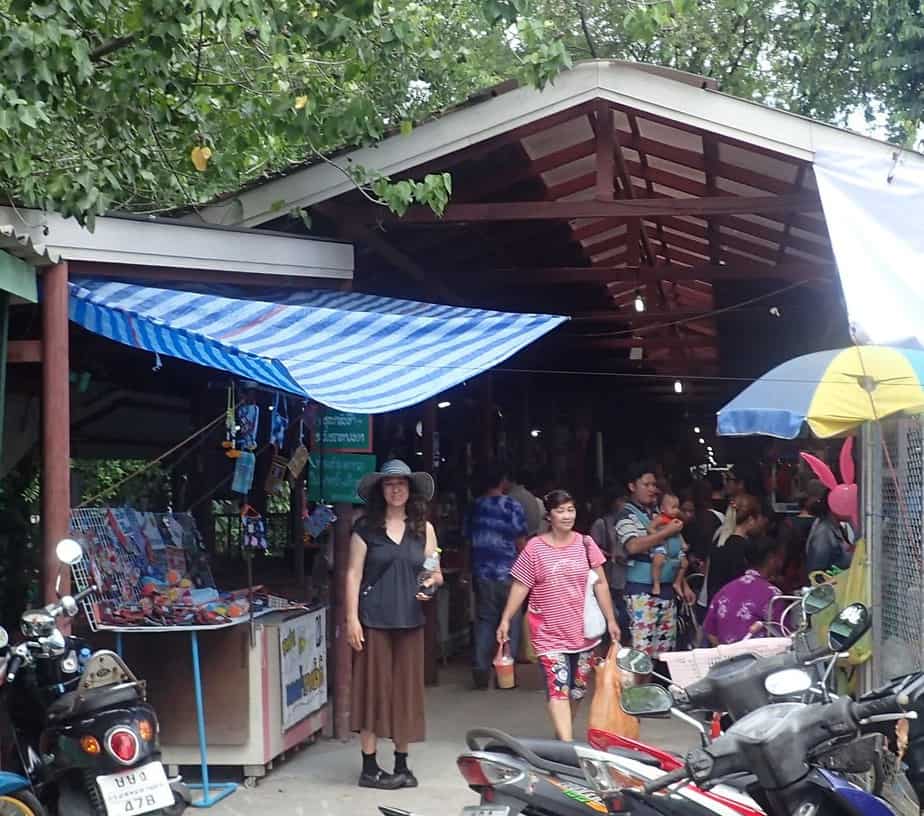 This is probably the most popular destination for many visitors to Bang Krachao. The floating market is formally known as the Bang Nam Peung Floating Market. However, unlike many of the other ‘floating’ markets that you may encounter in Thailand, this one isn’t actually on the water, but is rather built around the canals.

It is quite a large market tough as it turns out, and it extends along a couple of the area’s small alleys. There is a decent range of local foods, snacks, and desserts on offer, as well as locally-made, handcrafted goods for sale.

Bang Krachao Floating Market is open on weekends and holidays from around 8am in the morning until about 4pm. The morning is definitely the best time to see what is fully on offer though, as there might not be that much left later on and vendors will be packing away when they are nearly done for the day. 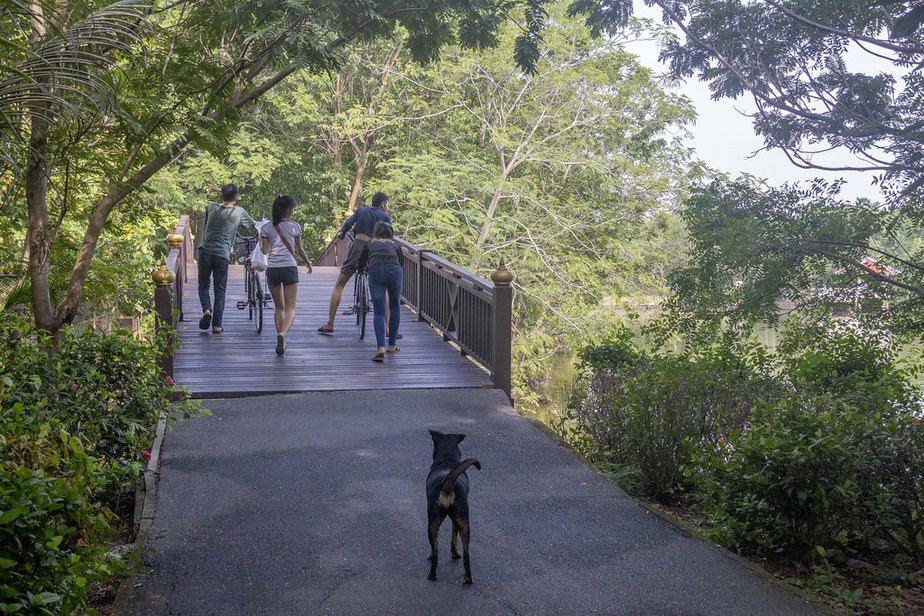 This is what might be called the real centre of the green lung, and is undoubtedly the most beautiful jungle oasis anywhere close to Bangkok that you are likely to encounter.

It comprises a vast wetland that covers an extensive area of 111,000 square meters, which should definitely be explored on a bicycle. The cycling routes here are well paved and marked, and you’ll find delightful little wooden bridges that allow you to cross the lakes and other areas.

Towards the back of the park there is also a 1km long dirt trail that winds through the jungle if you fancy something a little more adventurous. You’ll definitely lose all track of the fact that you’re close to a capital city when whizzing your way around this place. 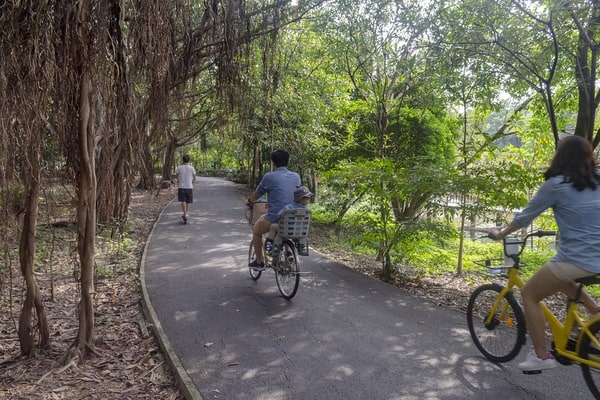 Even if you still won’t be tempted or cajoled into cycling, the real good thing about this area is that it is totally devoid of any other means of traffic. In that respect it is undoubtedly one of the most tranquil places you are likely to find in all of Bangkok.

Sri Nakhon Khuean Khan Public Park is open daily from 6.30am to 6.30pm. Bicycles are available for rent next to the entrance gate, and group tours can be accommodated.

Maybe you just fancy wandering your way around the area of Bang Krachao, in which case you should head towards the small streets from Sri Nakhon Khuean Khan Park back to Bang Nam Peung Pier.

This route will take you in the vicinity of small coffee shops, local farms, and weekend fishermen, and it’s a good way to experience the vibe of the region.

Another attraction of Bang Krachao can be found a little further along the east coast. It comes by way of a somewhat unique resort called the Bangkok Treehouse, and also known as the Bang Krachao Treehouse. This is an amazing and refreshing eco-friendly resort which has been deemed as Bangkok’s Greenest Hotel. 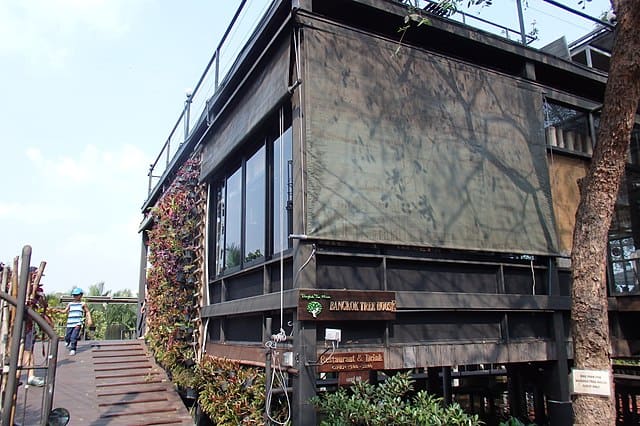 Image by mohigan from creativecommons.org

This place is actually a perfect overnight escape from the city if that’s what you fancy, but it’s worth a look if you’re in the area even if you don’t want to stay over.

There is a traditional herbal foot soak offered by Bang Ko Bua Herbal Foot Soak Club between Saturday and Monday at Bang Ko Bua health centre from 9am to 2pm. You can book in advance if you want to ensure you get to try it (contact Phut Dokrak 092-346-0088) or it can sometimes be arranged in tandem with the boat cruise.

Baantoop Community Enterprise is open on weekends from 9am to 3pm, with free entry. Baantoop is also open weekdays for for group visits (at least 20 people), but booking is required for (02-815-0729 and 086-569-1650). Check out facebook.com/teenee.baantoop for more information.

Suan Som Theppharot and Bang Krasob Learning Centre is open daily. The site visit is free of charge, and half-day or one-day activities are available through booking. Check out facebook.com/SomTheparos or call 087-934-6493 for further information.