7 of the Most Gorgeous Libraries in Paris 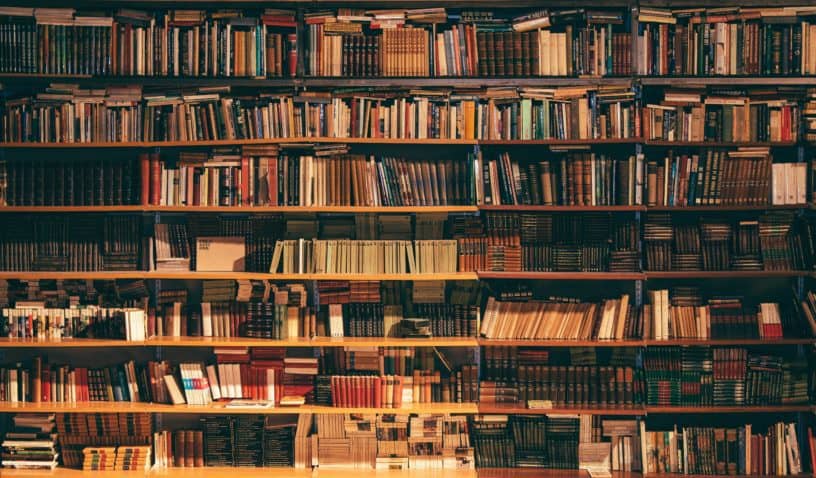 7 of the Most Gorgeous libraries in Paris 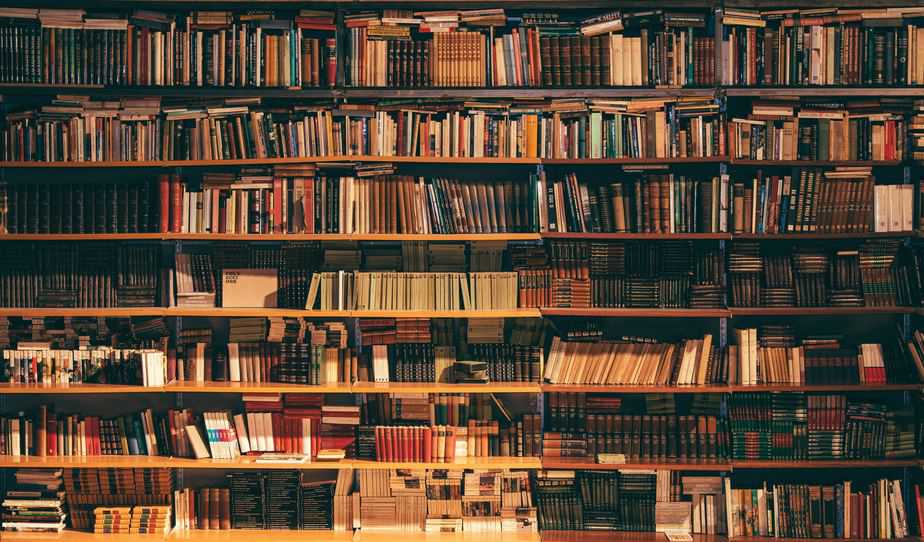 The Libraries of Paris are an immense well of history, art and beauty. If you are a student living in Paris, the libraries offer a warm atmosphere and comfortable surroundings to work or conduct research. If you are a tourist coming to Paris, the libraries are a perfect place to learn more about Paris’s rich history and seek haven in the book-lined walls, stowed away from the noisy, ever moving boulevards of Paris. 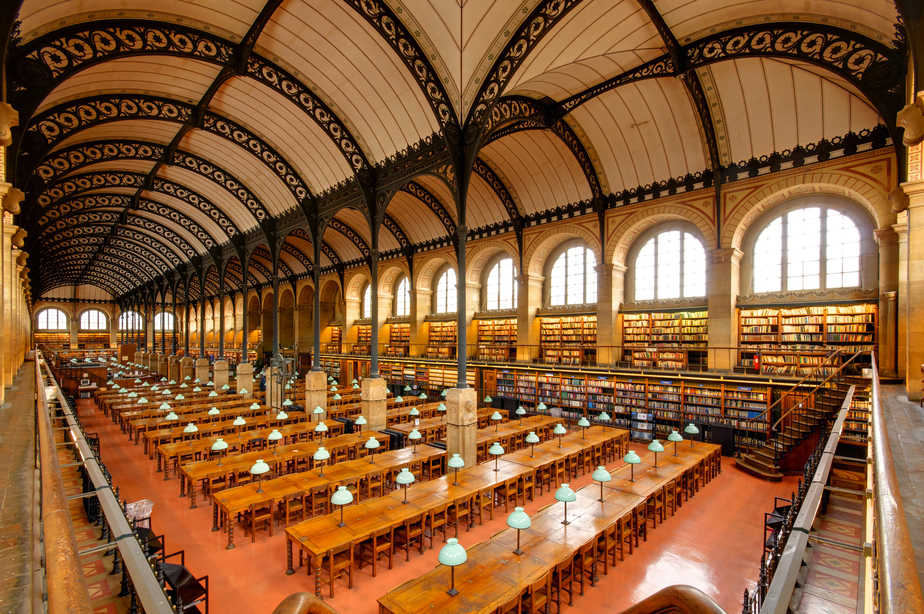 Located just to the left of the Pantheon in the Latin Quarter, the Bibliotèque Sainte Geneviève is home to nearly 2 million documents. Originally the abbey of St. Geneviève, the library was transformed and opened to the public in 1851 and still contains the original volumes inherited from the abbey.

Upon entering the Bibliothèque Sainte Geneviève, you feel as if you have been transported into the world of Harry Potter. The warm light radiates from numerous lamps that dot the wooden tables and large windows that lie above the shelves of books.

It is now both a public and university library. It is open to public visits only at designated times. Click here to find out more about visiting hours 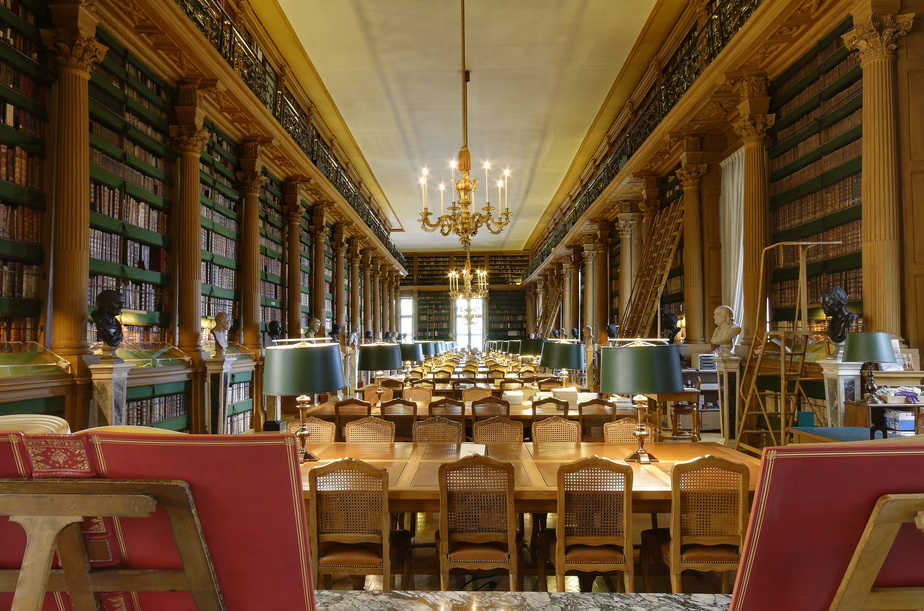 While smaller than the the Bibliothèque Sainte Geneviève, the library of Mazarine is no less awe-inspiring. The low hanging chandeliers and the walls of ancient books will send you back to the time to when philosophers and writers would sit, writing about the secrets of life and Paris. Except for the fluorescent glow of computers, much has remained the same.

Mazarine is a public library that overlooks the river on the left bank. It is the oldest public library in all of France and has around 600,000 volumes contained within. The gem of their collection is the Gutenberg bible. The original is kept locked away in a secret vault but a copy is open on display.

The library is open every day of the week. Tours are also available free to the public. 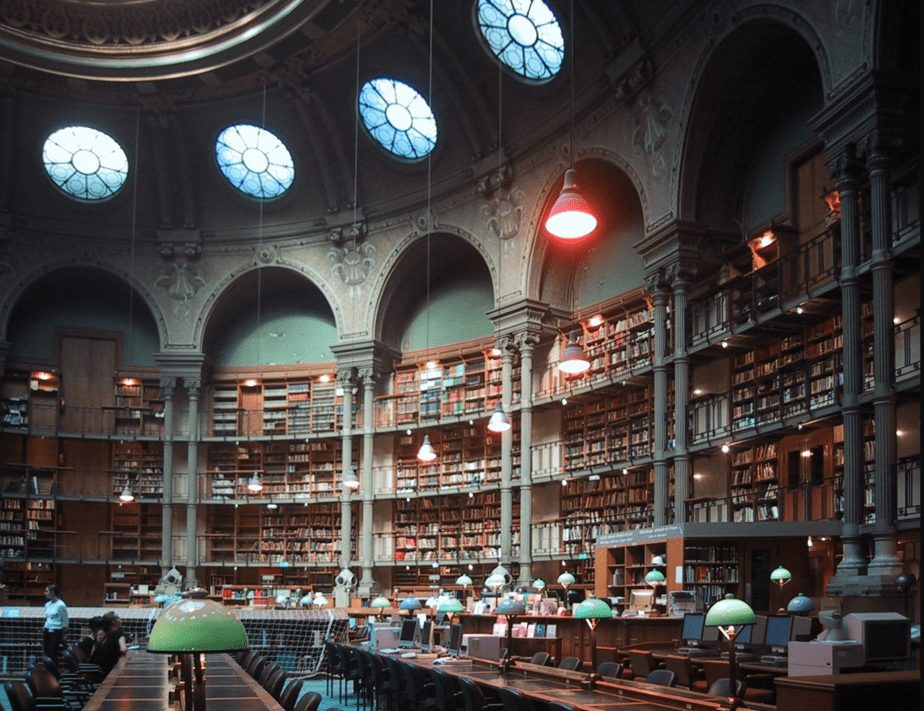 Smack in the heart of Paris lies the enormous library Richelieu-Louvois. It is part of the Bibliothèque Nationale de Paris and contains not only books but prints, antiques, music and maps.

It was originally built as a royal library and is now known to be one of the most complete libraries in all the world. Along with the books there are also exhibitions that take place here.

The American Library in Paris 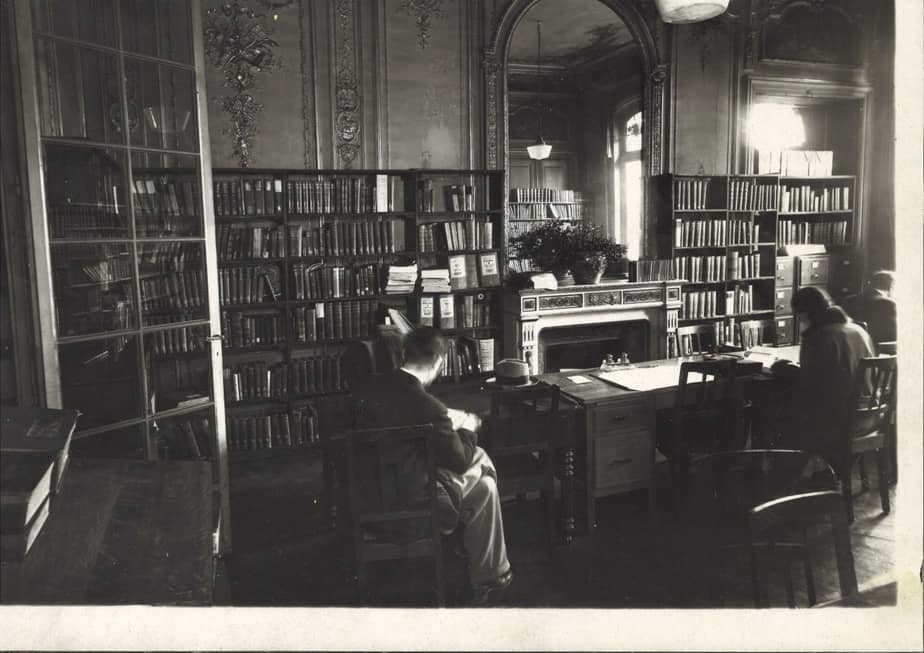 The American Library in Paris – WikimediaCommons

Near the Champs de Mars and the Eiffel Tower, the American Library in paris boasts of nothing from the outside. It is, however, the largest English library in Europe today.

It is a non-profit organization operating largely from government funding and private donations. Unfortunately, in order to visit the library you must first pay a membership fee upwards of 100 euro, making it slightly inconvenient for tourists to visit.

However, if you are an English speaker living in Paris, the American Library in Paris offers a range of community events for younger members as well as adults. It hosts everything from live readings to yoga classes. There are currently over 2,000 members from numerous different countries. It is also easy to become a volunteer, if you so desire.

Click here to find out how to become a member 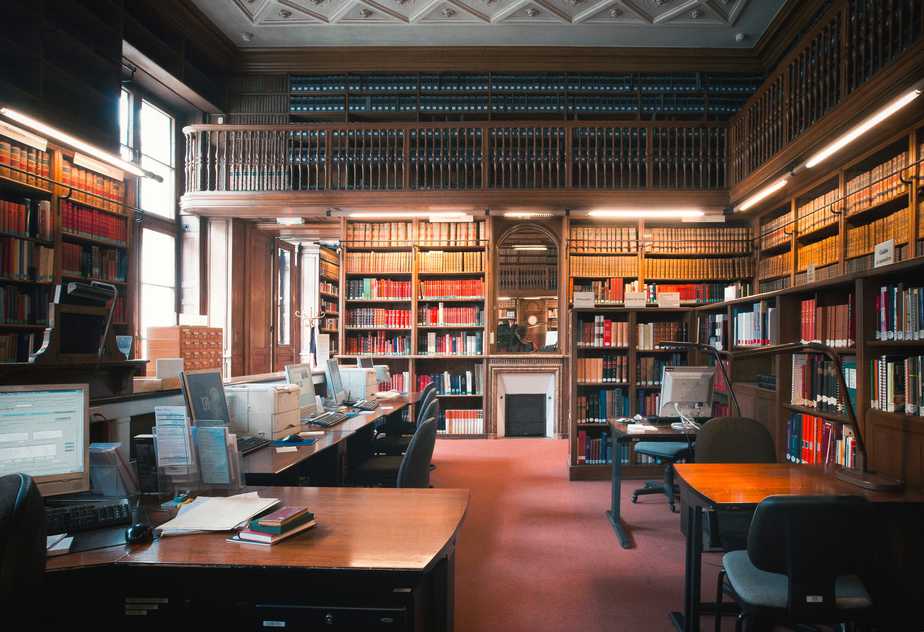 The library of the arsenal sits on the right bank of the seine, opposite the library Mazarine. It Is one of the smaller libraries in Paris and one of the four parts of the Bibliothèque Nationale.

It was originally a private library in the early1700’s, until 1797 when it was made public. It has inherited many volumes from ancient archives as well as the abbeys of Paris. The Archives of Bastille are the libraries most prized possessions. Within them lies the dossiers of prisoners and officers of Bastille. 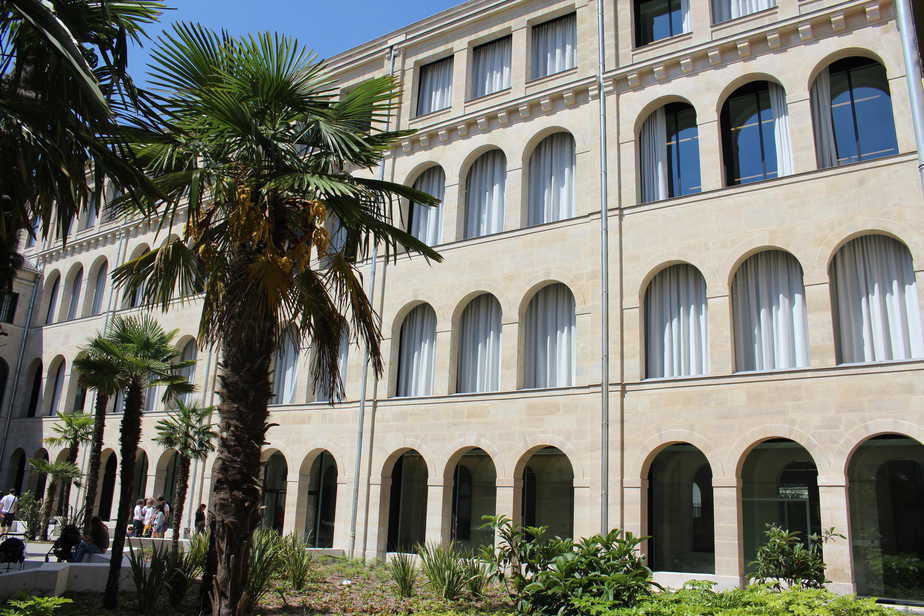 Strolling up to the Mésdiathèque Françoise Sagan is like leaving Paris and entering a Mediterranean courtyard. Sunlight pours into the garden, sprawling itself over the palm trees and the out-of-place architecture.

Like all the libraries of Paris, the history of the Médiathèque is long and twisted. At one time it was the old prison of Saint Lazare, then transformed in the 1600’s to house people with leprosy.

It is now the second largest media library, holding more than 30,000 documents that include books, dvds, vinyls and more. The library is broken up into various rooms, all with different specificities.

This is a must see for anyone interested in film and media arts. Click here to find out more about hours and location. 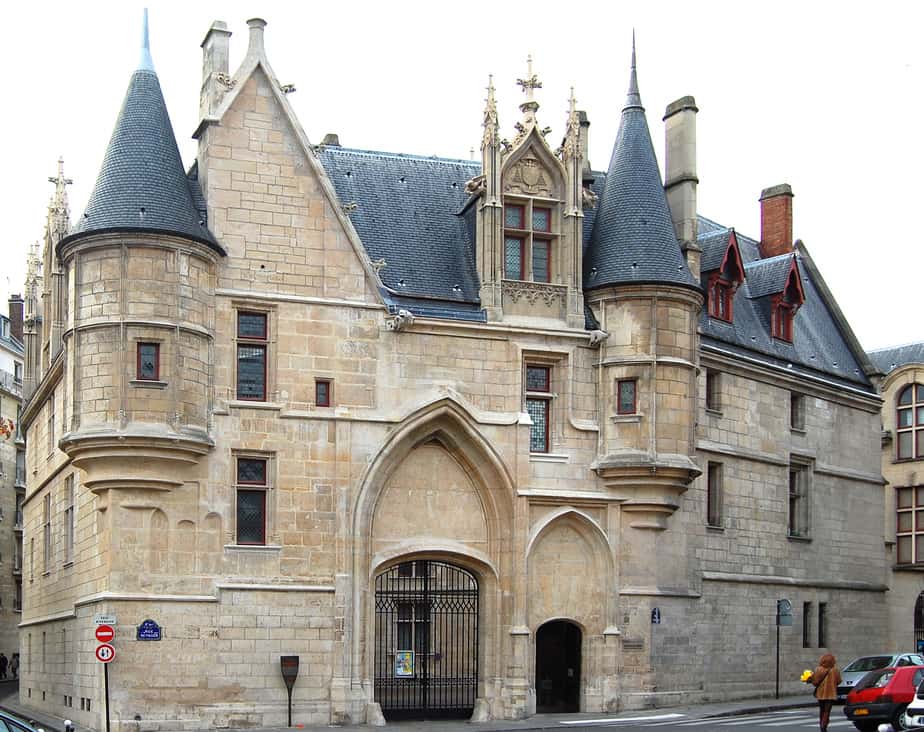 Bibliothèque Forney is my personal favorite library in Paris. Upon first seeing the Bibliothèque, I was reminded of Bram Stokers castle in Transylvania. The building was originally constructed as a mansion for archbishops and the gothic style remains today.

Inside the narrow halls is a group of small rooms that consist of the modern day library. It one of the most secluded libraries in Paris, making it a wonderful place to work quietly. It is easy to become a member and is open to the public.

Outside the library there is a small public garden. Located in the center of Le Marais, it is surrounded by some of Paris’s oldest history. I would strongly recommend visiting the Bibliothèque Forney as well as the rich area that waits outside of it’s doors.

Why see the libraries of Paris…

The libraries of Paris are often and unfortunately overlooked by tourists during their visits. Resonating from inside these libraries is the deep seeded culture that comes from Paris’s literature. Paris has always been home to writers and poets, both French and Anglophone. All of this, the history and the culture, is kept within the book ridden walls of the Paris libraries.