5 Things to Learn from the Canal Saint-Martin 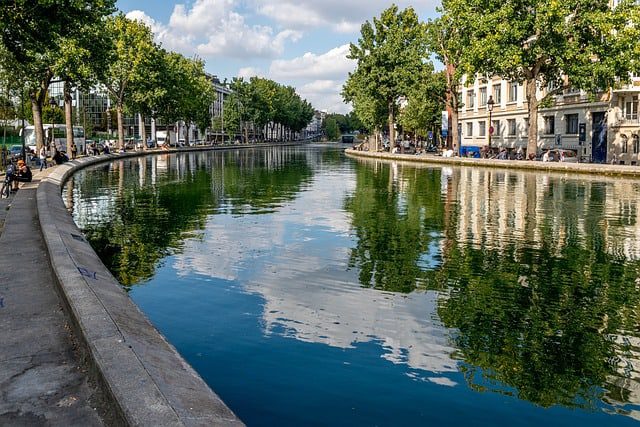 5 Things to Learn from the Canal Saint-Martin

I grew up on the seaside, so I love being near the water, and in Paris that means setting up camp next to the Seine River, or one of the canals! The Canal Saint-Martin is one of my favorite places in Paris, especially during the warmer months. It is less crowed (and I find it to be much cleaner) than the Seine. There are also a lot more Parisians that congregate in this area, so if you’d like to feel like a local, I suggest heading here! You can find the Canal Saint-Martin in the 19th arrondissement. 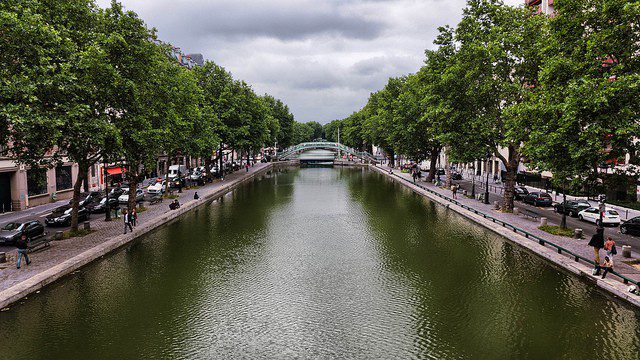 There are also tons of yummy restaurants, trendy cafés, and boutiques that line the Canal Saint-Martin, meaning that there is no shortage of things to do if you want to spend your afternoon in the area.

Like anywhere in Paris, this is also a lot of history behind the Canal Saint-Martin, keep reading for my list of 5 things to learn from the Canal Saint Martin!

1. The Canal Saint-Martin once supplied fresh water to Paris 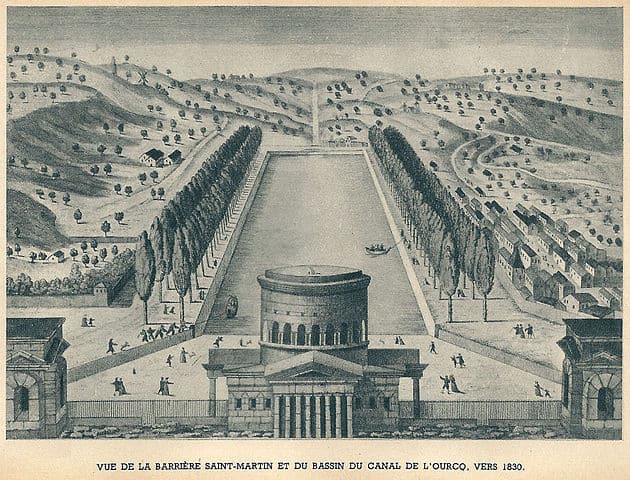 Construction of the Canal Saint-Martin began in 1802 by orders of Napoléon Bonaparte. The Prefect of Paris at the time, Gaspard de Chabrol suggested that building the canal would provide a solution to the growing population’s need for fresh water. With a fresh water supply, diseases such as dysentery could be avoided, and fountains and street cleaning would be provided with water as well. The project was actually funded by a new tax placed on wine!

By the 1960s, boat traffic slowed to nearly a halt, and their were even proposals to cover the canal to make way for a highway. Thankfully the proposal was not passed, and the Canal Saint-Martin still exists today!

2. There are 3 underground tunnels on the Canal Saint-Martin 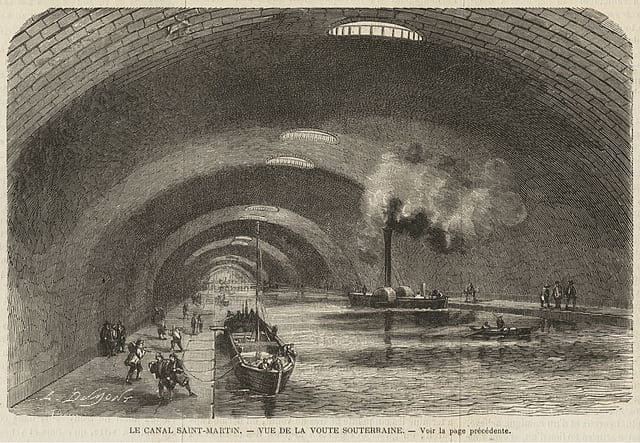 As I mentioned, the Canal Saint-Martin begins at the Port de l’Arsenal and ends at the Bassin de la Villette. If you’re like me, you may be looking at a map of Paris and wondering “How the heck does the canal cross the Place de la Bastille, and a portion of Le Marais?!” Well, to answer your question, there are a series of 3 underground tunnels on the Canal Saint-Martin!

The three canals are called, respectively: du Temple, Richard-Lenoir and Bastille, and spits you out at the Bassin de la Villette, if you’ve started at the Port de l’Arsenal.

I definitely recommend taking a boat trip down the canal, where you can check out the tunnels for yourselves. There are 3 different companies that do the tours, and I went on the one put on by a company named Canauxrama. The tour is done in French and English, so Anglophones – rejoice!

3. The Canal Saint-Martin is listed as a historical monument

About 2 centuries after the Canal Saint-Martin was completed, the site was named a historical monument! The canal joins a pretty impressive list of historical monuments in Paris which include the Eiffel Tower, the Notre-Dame Cathedral, the Arc de Triomphe, and the Sacre Coeur. Not too shabby!

4. The Canal Saint-Martin is a hot-spot for film makers

If you’re like most Paris-obsessed people, you’ve probably heard of the 2001 film Amélie. The film takes place in Paris and features scenes that take place in Montmartre, and more importantly for those of you reading this article, the Canal Saint-Martin! One of the main character, Amélie’s, favorite things to do is head down to the canal to skip rocks at the lock bridges of the canal.

Amélie is not the only film that the Canal Saint-Martin is featured in. The famous 1938 French film, Hôtel du Nord is centered around a hotel located near the canals, and famed French singer Édith Piaf sings about the canal in her song “Les mômes de la cloche“. 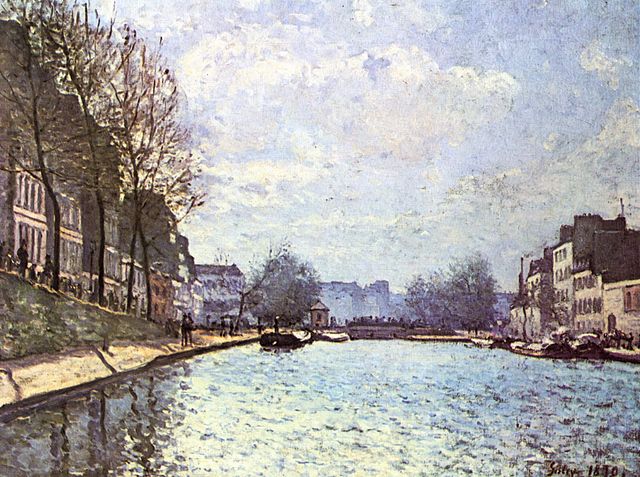 Film makers weren’t the only ones who took notice of the canals beauty. Artists Alfred Sisley and Arthur Fillon both painted picturesque versions of the canal through the years.

5. The Canal Saint-Martin is drained to keep it clean 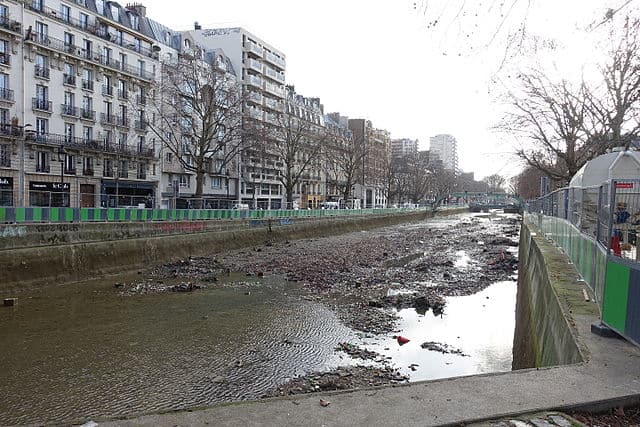 The Canal Saint-Martin is drained and cleaned every 10-15 years in order to keep the canal up and running smoothly. As you can imagine, in a big city like Paris, there are tons of interesting things found in the canals each time they drain it!

I was luckily enough to witness the cleaning a few years ago, in 2016. I remember walking along the canal, thinking how funny it looked with no water, when suddenly, I saw a bike lodged into the ground! I certainly felt bad for the poor soul who lost their bike in the canal, but it also made me wonder…what else have they found over the years?! 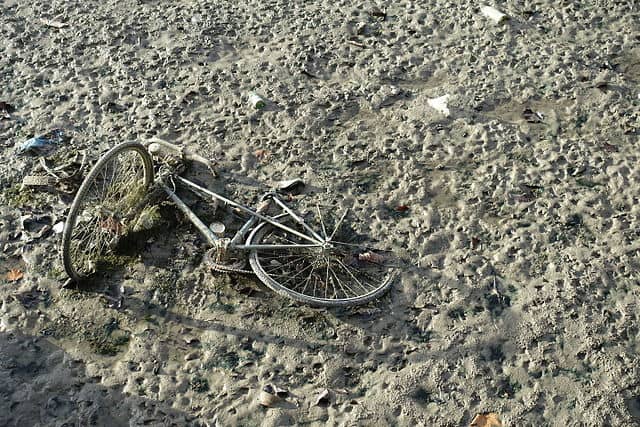 I did some digging, and found out that each time the canal is drained, interesting objects are found. This includes: shopping carts, wheelchairs, bottles, motorcycles, bed, and even toilets!

The most interesting finds I read about have got to be gold coins, and some old shell casings from bullets shot in World War II!

If you’re like me, and crave a little water in your lives, I recommend you check out the Canal Saint-Martin. It’s a lovely place for a picnic, a jog, or a day out café hopping. Most tourists don’t know about this area (I spend 6 months here for my exchange and never once made my way to the canal!), so you’ll really feel like a local.

If you want to wander through Paris, but are having trouble deciding what to do, why not come on a tour and leave the hard work to us?! Click here for more details!