5 reasons to visit the Aquarium of Paris 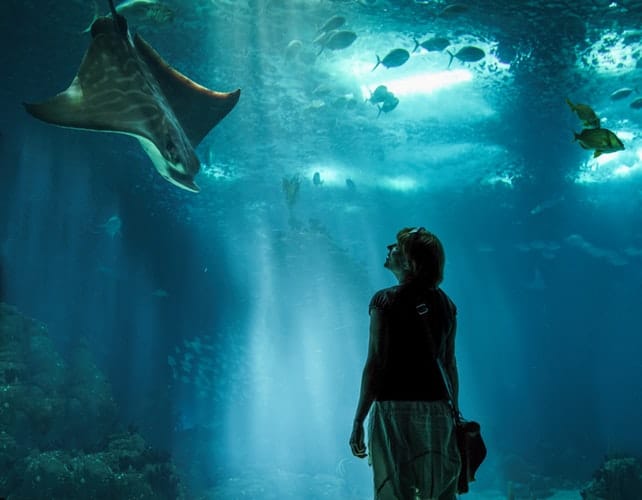 When you imagine the monuments you might visit on your trip to Paris, you could be forgiven for not putting the Aquarium at the top of your list.

Granted it’s perhaps not as obvious as the Louvre or Eiffel tour, but who wants to follow the crowd after all?

I’m here to inspire you to hop off the well-trodden path and sortir des sentiers battus. In visiting the Aquarium of Paris, you’ll have a unique Paris story to share and plenty of fodder for your Instagram stories. 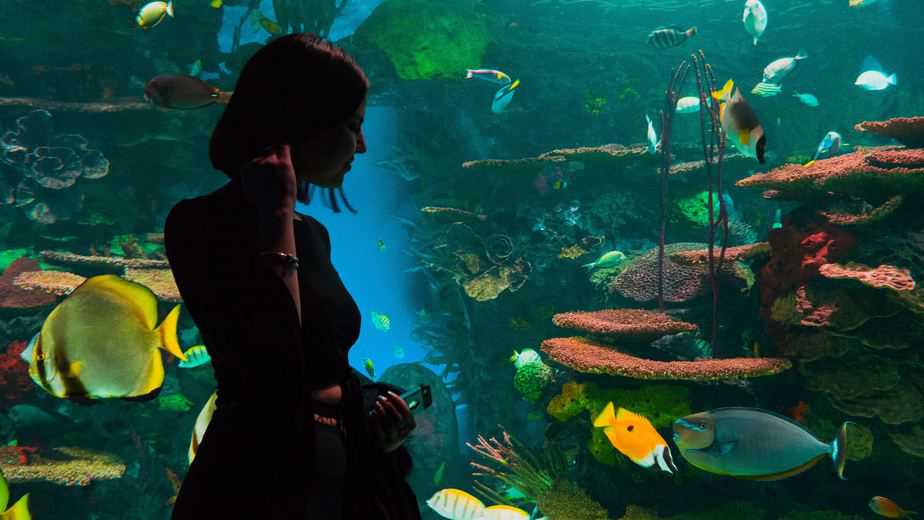 The Paris Aquarium is the quirky hipster’s choice. As well as families with young children, and tourists the other demographic drawn towards the watery calm of its tanks are young creative types – just search the hashtag on social media if you don’t believe me!

And they’re here with good reason. It’s a lovely calm, slightly ‘other’ place to reflect and draw inspiration from. Walking past certain of the tanks is a surreal, trippy experience.

Anyone struggling with mindfulness techniques to calm the internal chatter, should probably consider plonking themselves on a bench in front of the fish and watch the world float by.

The sharks make especially hip and quirky subjects. There are a few different viewing points into their tank: One is through a fish-eye lens, this creates a bubble effect, making them seem smaller and cute, the next when you round the corner is a full-on observatory with several seats.

You’re pretty low down here and it’s quite a fun feeling to have them circling around above your head, occasionally slinking past an opening in the rock to come up close to the glass.

The cool crowd also head down at night, since one of the Aquarium’s rarities is that it magically transforms itself into a nightclub!

This only happens on Saturday nights and l’aQuarium club opens its doors at 8:30pm, for the restaurant. The nightclub reopened under the moniker l’Abyss. Every Saturday they organise select soirées with different DJs. The set list revolves around Deep House – a music that fits the setting exquisitely, although I did wonder how the fish felt about that resounding bass!

As for the restaurant, eating in front of the fish is a pretty special experience. A set menu is on offer at €49 per person. This includes plates such as tuna sashimi or burrata, followed by veal, beef or sea bass and traditional desserts including lemon meringue tart and chocolat mi-cuit.

All the meat is sourced from France and impressively the farm-fresh produce comes from the Aquarium’s own ‘Zen Farm’ – their Normandy based agricultural project. At less than 200km from Paris, it’s where they raise their chickens too. This way they can guarantee everything served in their restaurant and café is pesticide and GM free. 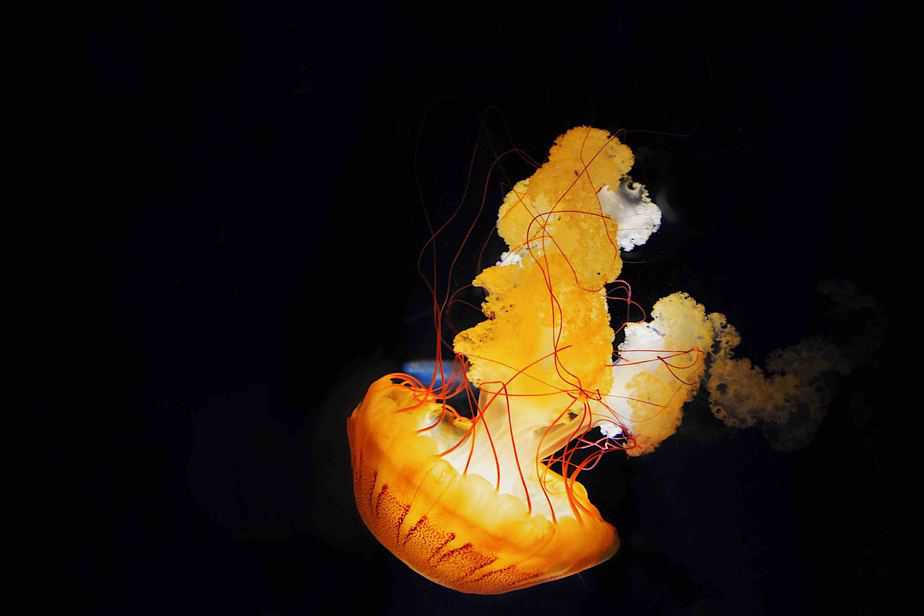 If you enjoy photography, I would strongly recommend that you bring your camera.

The Paris Aquarium doesn’t have the same sort of beauty as the romantic architecture, stretching as far as the eye can see in central Paris, nor the paintings on show in any of the world famous museums, but it does have its own magnetic charm.

You’ll appreciate this from the moment you round the welcome desk and down the ramp into the aquarium. It takes a moment for your eyes to adjust to the dim lighting and glowing tanks.

There are stunning species in many of the aquarium’s rooms, but if I were pushed to choose just one that stood out spectacularly it would be the Medusarium hands down.

In this large round room dedicated entirely to jellyfish you enter a quasi-hypnotic state. This mood is enhanced by the calm, slightly spacey new classical soundtrack.

Even the children are a little quieter in this room, a couple of young couples indulge in PDA’s kissing or holding hands huddled in front of one of the many illuminated glass tanks. 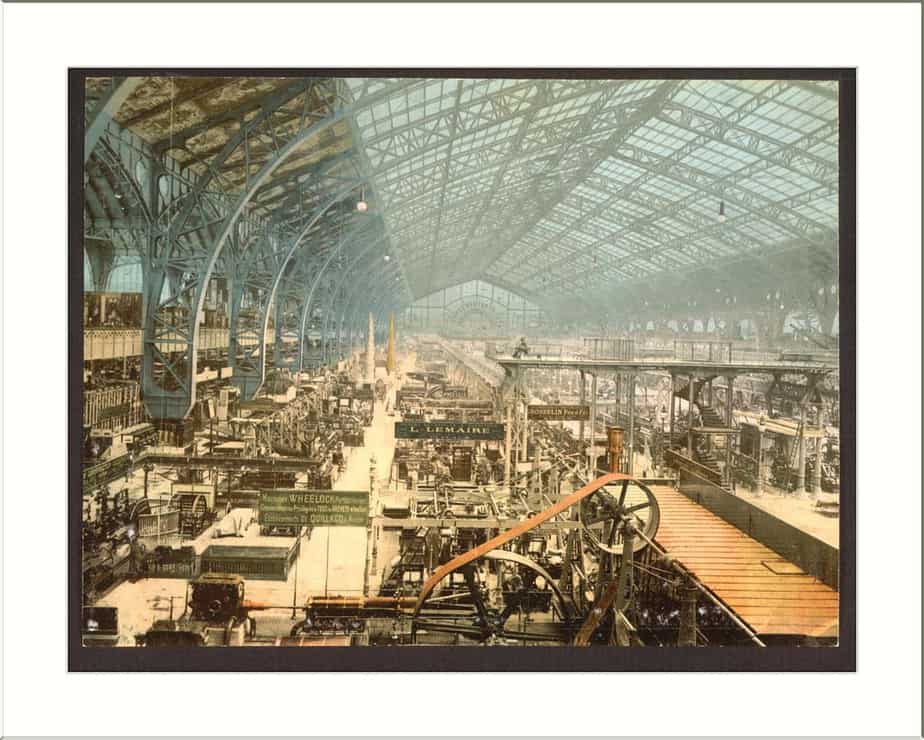 The History of the Aquarium of Paris starts in 1978, it was part of the notorious ‘Universal Exhibition that was hosted in Paris and for which the Eiffel tour was constructed.

Thanks to their shared history, the Eiffel tour and Aquarium are only a two minute walk away from each other. Walking through the jardins du trocadéro you’ll get plenty of panoramas with the iron lady directly in front of you as you walk past CinéAqua’s barriers and security cabin check point.

The Trocadero Palace was also built for this occasion and beneath it l’Aquarium du Trocadéro, as it was called at the time.

For many years the Aquarium welcomed fish focused folk from the capital, until it’s closure in 1985 when it was deemed vétusté or antiquated. Incidentally, when I visited the état des lieux was impeccable. They even had a print out stating they’d be renovating a small part of the wall near a tank where humidity had chipped away a little at the paintwork.

Next the Aquarium was bought up by a private investor: A huge building site started in 2003 to be finished three years later. Their goal was to get rid of the existing structure to create the largest Aquarium in France: The Aquarium of Paris, or indeed ‘Cinéaqua’. 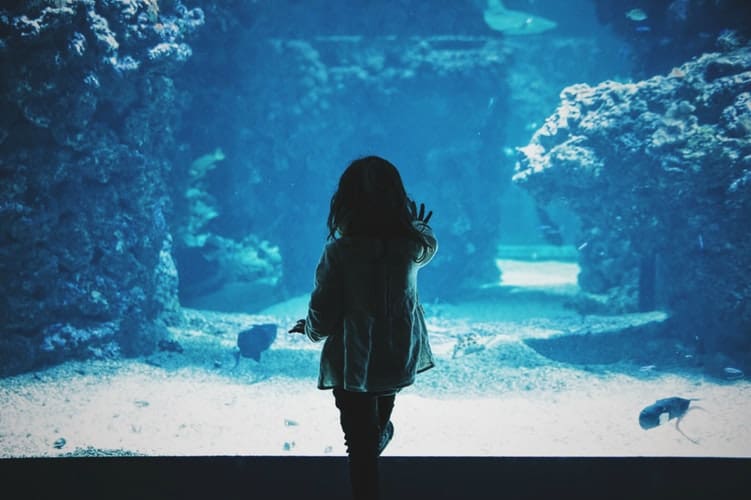 The Aquarium of Paris has a wide range of activities on offer. It is a veritable El Dorado for children, especially toddlers and first few years of primary school. The academic side of the Aquarium is presented beautifully. Lit up fact sheets with moving videos are placed between the tanks. Every so often younger visitors will have the opportunity to measure themselves against one fish or other on a fun life-size poster on the wall.

The cinema, which is at least 70-80 comfortable seats, runs short related documentaries, which have great graphics and can be enjoyed at any age. After the large shark tank and a white tent presenting smaller exotic tanks, you arrive on board a pirate ship. Cartoonish voices play out a scene on deck, the pirates themselves are there (as life-sized figurines) and the rock formation is explained through lego!

The visit ends with an open top carp pool in an oriental garden. The fish swim up their large gaping mouth popping above the surface. Down below there are a selection of ride on toys (Noddy amongst others) and a cafeteria.

But what I really love is the initiative they take with their live events such as ‘yogAquarium’. Launched at the end of last year, 2018, it offers families the opportunity to practice yoga in an incredibly zen setting.

A recent session planned for Sunday 27th January 2019 cost just 10€ for children (who must be ten or over) and 20€ for accompanying adults. You can find tickets online with our partner.

5. They’re Good-doers for the Goldfish (and the other species seem well cared for) 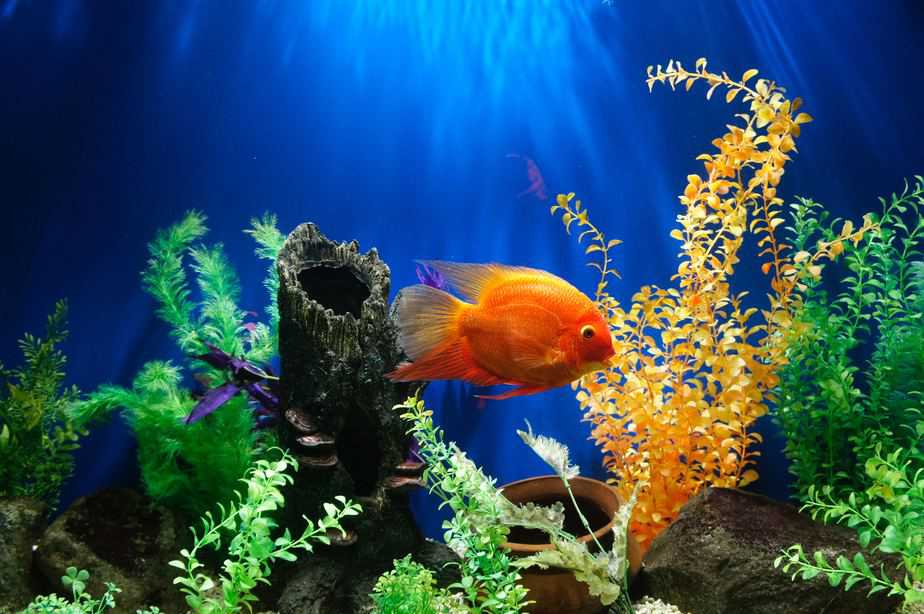 The Paris Aquarium welcomes residents to drop off their unwanted goldfish, or red fish (poisson rouge), if we’re being true to the French. This was claimed in an article written up in the Local in August 2018. I checked on it and it is indeed true.

Whilst we would hope that owners would behave responsibly towards any animal they take into their home, however big or small. Goldfish often suffer an undignified end. Here at the Paris Aquarium, the most domestic of their attractions live out their days in peace.

I can perhaps identify with this one more than most. Back when we bought our beautiful house in the countryside there were actual tropical fish living in the wall – a sort of 1980’s dentist, relaxing aquarium feature thing.

On the eve of completion and our final visit, happily the owners agreed to find their pets a new home. They were planning on gifting them to us with the house. This might seem strange, but built into the wall, they had become so much ‘part of the furniture’.

I can only imagine how thrilled our cat would have been with the new game of “patte, patte, poisson”.

For now I think I’ll stick to visiting the Aquarium de Paris..

Often when we think of animal rights fish get the raw end of the deal. However, here at the Aquarium of Paris I was impressed as a punter to see large clean tanks decorated with rocky enclaves, plants and different obstacles and features to keep the larger species stimulated.

Living in captivity obviously represents certain challenges and we should note here that I have no professional experience with fish whatsoever, (we didn’t keep the Aquarium in our country house, remember?)

However, overall I think the fresh smell and spotless walkways testified to a sound level of hygiene for the life long residents of the Aquarium of Paris. Plus their engagements at the Zen Farm show that animal welfare is a priority and preoccupation.

So enjoy your visit to the Aquarium however you choose to visit – by night, with children, your best lense or for a little quiet reflection.

After your visit, if you still have a little energy left, the good news is you’re in the centre of the city and there’s a tonne of things to do around Trocadero! Have a look here for inspiration.