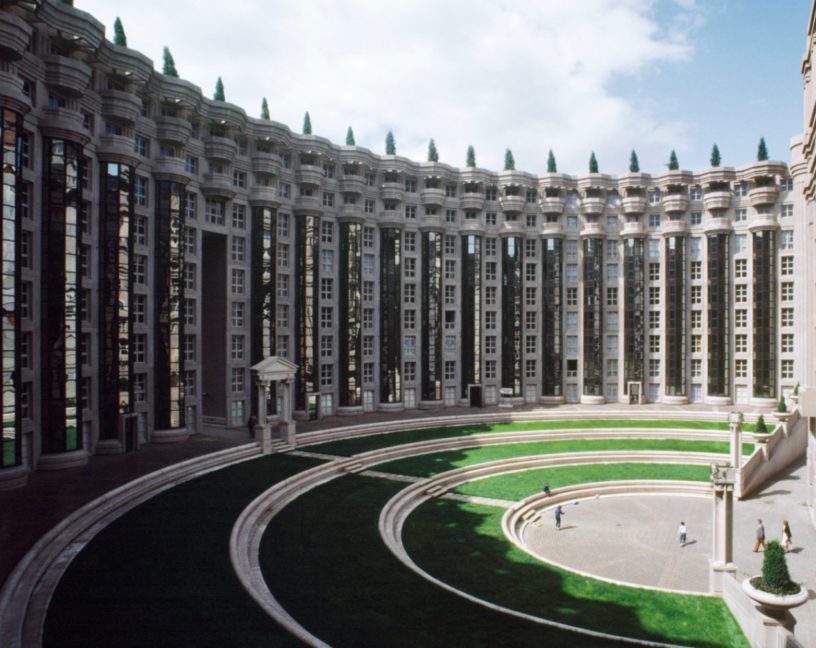 Every visitor to Paris has snapped a photo at the Eiffel Tower, or taken a selfie with the Mona Lisa. But some of the capital’s most photoworthy buildings actually lie outside the center! Greater Paris refers to the suburbs surrounding the city limits. Paris and its expansive suburbs a bustling metropolis home to more than 13 million people.

As the city develops and expands outwards, the suburbs or banlieues are witnessing a growth and development all their own. Buildings are being updated and constructed everywhere you look, which provide interesting contrast next to the ancient limestone façades.

If you want to photograph a unique side of Paris, look no further! Here are 5 photoworthy buildings in greater Paris. 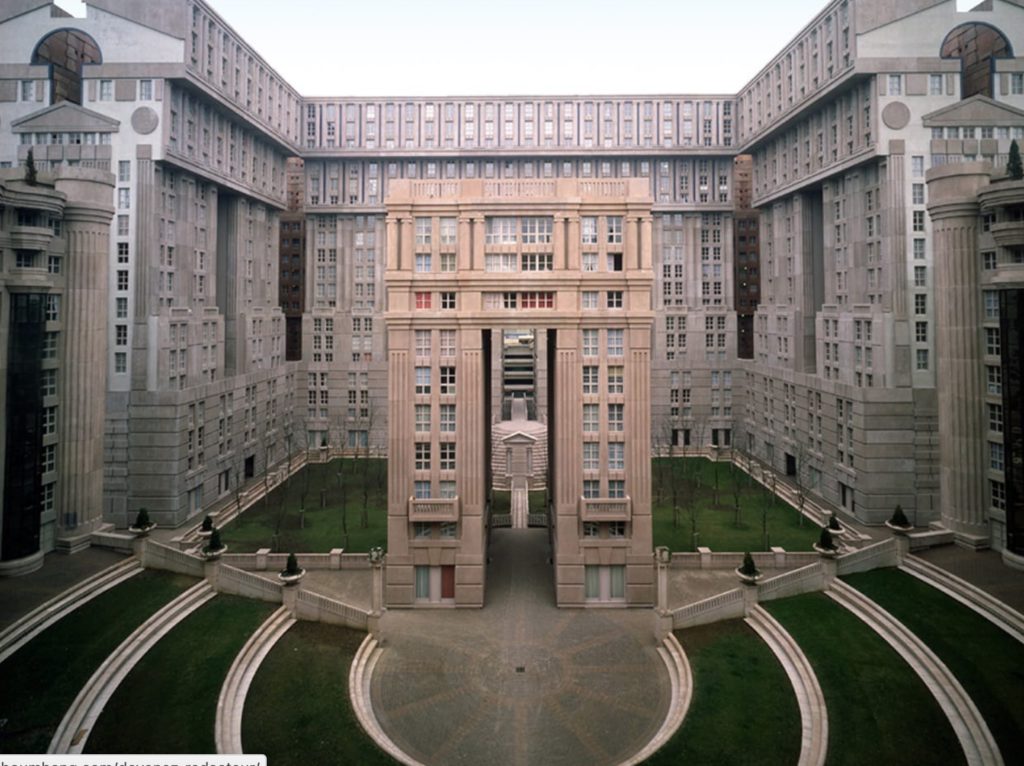 The first up on my list of the most photoworthy buildings of greater Paris is found in Noisy-le-Grand. Though Noisy is just 15 kilometers from Paris city center, the futuristic architecture will make you feel as if you’ve stepped into another world.

Les Espaces d’Abraxas or simply the Palacio for locals, is the main attraction here. Experimental Catalonian architect Ricardo Bofill designed the property in the early 80s. And perhaps most surprisingly, it’s actually a housing project with 610 residences. The Palacio’s semicircular 17-story neoclassical façades frame a massive central courtyard and a 10-story arch. There’s even some residences in arch itself!

And due to its unusual style, many movies have been filmed at the Palacio. Including Blockbusters like the Hunger Games!

You can take the RER A from Paris Gare de Lyon to reach this photoworthy spot. The journey is direct and simple, and should take about 30 minutes. 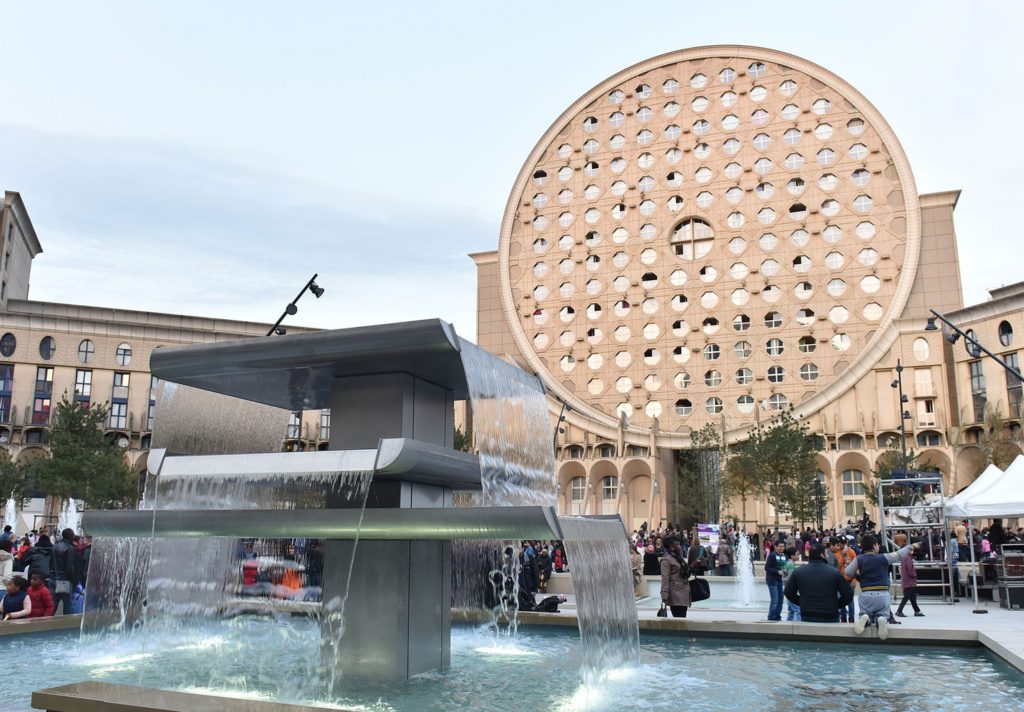 Our next stop on this little tour of photoworthy buildings in greater Paris is just a 15-minute walk from the last stop! Officially known as the Arènes de Picasso, this interesting structure is more affectionately called le camembert – a homage to the round French cheese it’s said to resemble.

Concieved by experimental Spanish architect Manuel Nuñez Yanowksy in 1981, the impressive collection of housing structures took 4 years to build, and was inaugurated in 1985. A decidedly futuristic design The arena’s octagonal structure centers around a vast courtyard and green space, known as the Place Pablo-Picasso. The two most notable and photoworthy features, are the two cylindrical buildings on the West side of the courtyard.

While most people see a camembert shape when they look at these, they are meant to be an abstract interpretation of an overturned chariot, according to the architect. So I guess it’s up to you, what do you see? 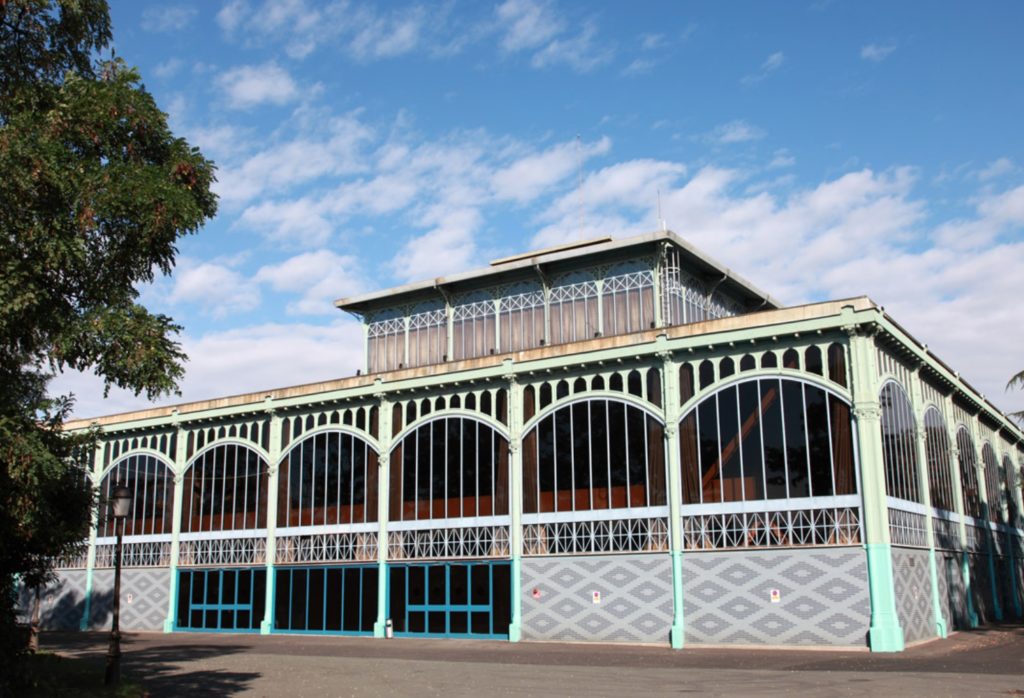 Next up on our tour of photoworthy buildings in greater Paris brings us to Nogent-sur-Marne; one of Paris’ Eastern suburbs. This time, the building of interest has been classified as a historic monument. The iconic Belle Epoque style glass and wrought-iron Pavillon was created by revolutionary French architect Victor Baltard in 1870. Baltard was well-known for his work in Paris including Saint-Augustin church and Les Halles.

The Pavillon was originally constructed in Paris, but Emperor Napoleon III disliked the building so much he had it moved to its current location! Hard to imagine why he didn’t like this style which has become so eponymous of Paris. But then again, no one liked they Eiffel Tower when it was first built, either.

In order to get to Pavillon Baltard, take the RER A from Les Halles station for five stops until you reach Nogent-sur-Marne. After that, it’s just a 5-minute walk to the Pavillon. All in all, the journey is pretty simple and takes less than half an hour from central Paris.

If you don’t feel like leaving the city, you can also spot this style of architecture at many Paris monuments and covered marketplaces. Some notable spots include Carreau du Temple, Les Halles, and the  Marché d’Aligre.

Our next stop takes us to Motigny-le-Bretonneux, which is a Western suburb of Paris, just next to Versailles. The main attraction here is the beautiful Arcades du Lac housing development. The central part of the development is called ‘le viaduc’ and resembles an ancient viaduct, which reaches out into an artificial lake. Referred to as “Versailles for the people” the Arcades du Lac is definitely one of the most photoworthy building developments in greater Paris.

The Arcades du Lac are yet incredible apartment building project from Catalonian architect, Ricardo Bofill. Perhaps the most impressive aspect is ‘le viaduc’; the elaborate arched buildings jutting out into the lake. The Arcades du Lac were constructed relatively recently in 1981. But you can’t tell just by looking at it! Inspiration for the Arcades du Lac came from the likes of Chateau de Chenonceau and ancient French viaducts. And Bofill managed to blend in a more classic Renaissance style too.

This place is a little harder to get to if you don’t have a car in Paris, since it isn’t easily accessible on public transport. It’s about a 40-minute drive if you do make the trek out there, and you can even enjoy a picnic in Versailles afterwards! The gardens are free to enter from certain locations, so it’s very easy if you have a car! 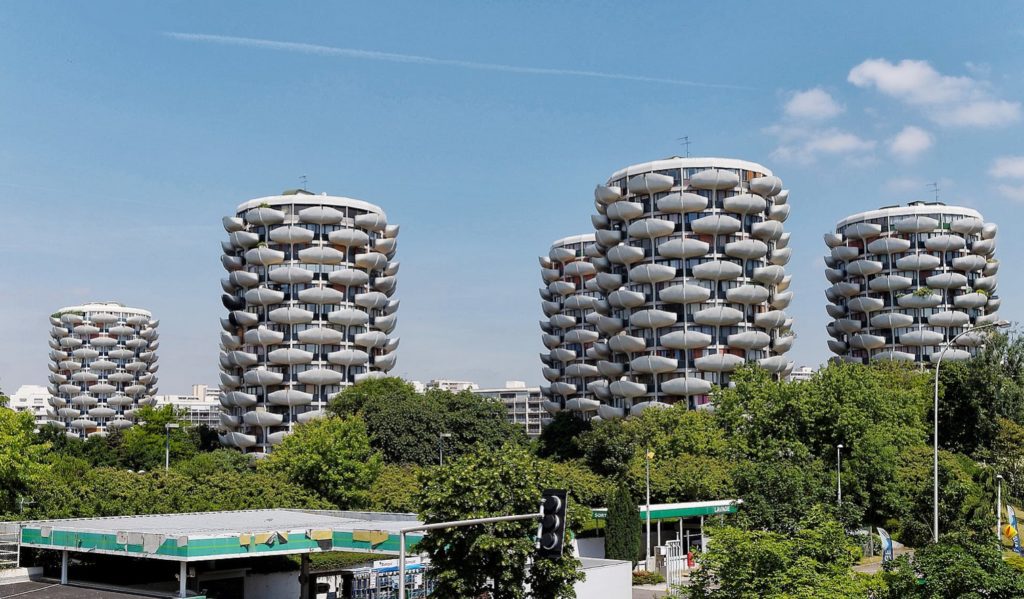 Now the last stop on our tour of photoworthy buildings in greater Paris is actually the closest. Located in the close Parisian suburb of Creteil, the Choux de Creteil are for sure worth a visit if you’re into funky French architecture.

The choux are a group of ten cylindrical residential buildings, each 15 stories high. Many people don’t know, but Cretail, like many of the Parisian suburbs were formerly farmland, which provided much of Parisian’s produce. I imagine that architect Gérard Grandval had this in mind when he designed and named these Choux (or cabbage in English).

Oddball architecture certainly plays a role here, but the design is a functional one. For example, the cylindircal shape of the building is to let in more light and let residents be closer to the windows. And the high balconies provide access to an outdoor space while maintaining resident’s privacy.

The Choux are pretty easy to get to from central Paris, and it should only take about 20 minutes. Simply take metro line 8 (direction Creteil) to the Creteil Université station. Then it’s about a ten minute walk from the station to the Choux.