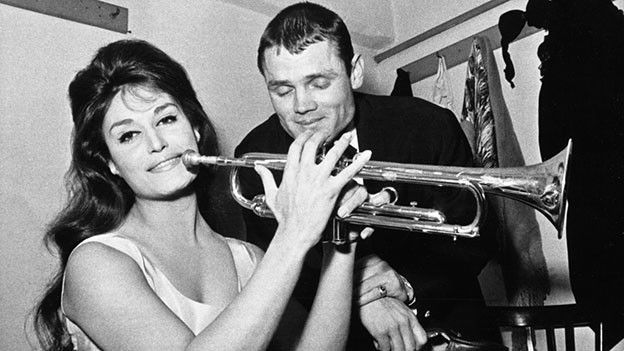 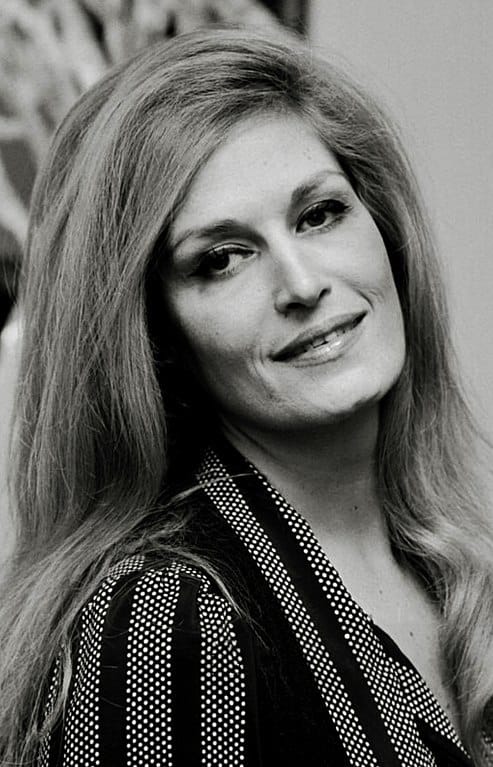 This should come as a shock, as Dalida sold 170 million albums worldwide, is renowned as one of the most popular singers in the world, and was the first singer to receive a diamond disk. She recorded her songs in French, German, Arabic, and Italian, and was awarded more than 70 gold records.

The first time that I discovered Dalida, was while wandering through the streets of Montmartre. Some of you may be familiar with the bronze bust of the singer in the Place Dalida. Legend has it, if you rub the statue on its more…er, delicate parts, you’ll have good luck!

As soon as I saw the statue, and noticed that the Place was named for her, my curiosity was immediately sparked! I did some digging, and found out that Dalida lived quite an amazing life!

Do you want to learn more about this pop princess of the 20th century?! Keep reading for the 5 most interesting facts about Dalida.

Dalida was born Yolanda Gigliotti in Cairo, Egypt in 1933 to Italian immigrants. Her father was a violinist at the Cairo Opera House, so it’s safe to say that she grew up surrounded by music.

Yolanda had a rather normal childhood in Cairo, growing up in a bourgeois neighborhood and attending the local Catholic school. She did experience quite a few problems with her eyes as a child, undergoing at least 3 operations.  Yolanda was also very self conscious of her glasses, going so far as refusing to wear them.

In spite of  this, she was an outgoing child, joining the drama club at school, and secretly entering into beauty competitions. When her parents found out (and saw her in scantily clad swimsuits), they were furious, and insisted that Yolanda begin studying to become a secretary. Yolanda soon dropped out of secretarial college and secretly began working as a model at the couture house, Donna. 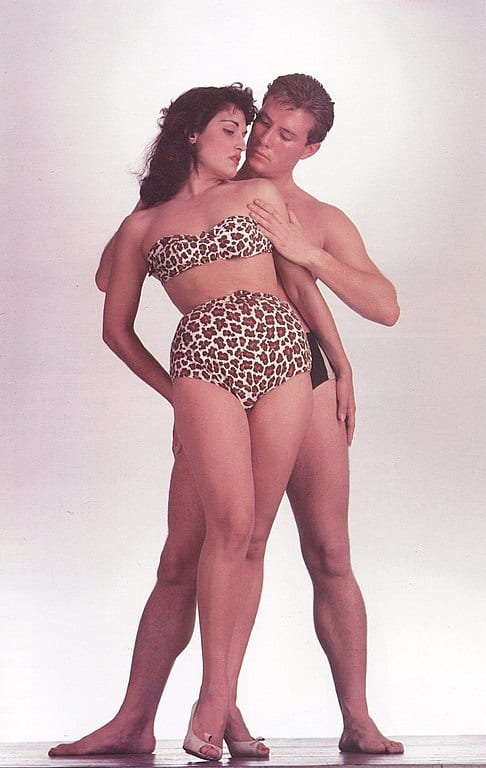 In 1954, Yolanda entered into the Miss Egypt competition. She won the competition, and soon became the darling of the Cairo film industry. After appearing in a few films, she was discovered by French film director Marc de Gastyne. Yolanda became Dalida, and she began dreaming of starting an acting career in Paris.

Dalida hopped on a plane to Paris to pursue her dreams! In the beginning, she found life in the cold capital difficult. Deciding to explore singing, Dalida began taking singing classes. After months of training with a notoriously mean coach, she auditioned for a spot in a cabaret on the Champs Elysées, and was immediately accepted.

It was on stage at the cabaret that she was discovered by Lucien Morisse (the artistic director for Europe 1, a French radio station) and Eddy Barclay (owner of Barclay label). The two had a feeling that Dalida was going to be a superstar, and boy, they were right!

Dalida was a successful popstar from the start

After being discovered by Morisse and Barclay, Dalida quickly got to work recording singles. Her song “Bambino” rose to the charts almost immediately after its release, and stayed in the Top 10 charts for 46 weeks! The single sold over 300,000 copies, and was the first gold record she received. This was just the beginning for Dalida, as she went on to receive 70 gold disks! 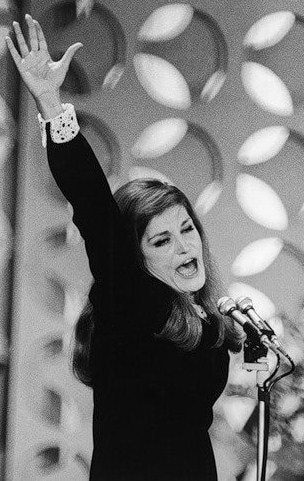 Dalida in concert in 1967 at San remo – WikiCommons

Dalida continued her career, performing at sold out shows at the famous Parisian concert hall Olympia, and singing at concerts throughout Europe and Asia.

She soon became world famous, with her face appearing all over television and magazines. In 1968, she was even presented the Médaille de la Présidence de la République by General Charles de Gaulle. In the same year, she was also awarded the Medal of the City of Paris, cementing her connection to her new home in the French capital.

Dalida bizarrely received a lukewarm welcome in the United States, but this didn’t get her down! Every time she toured around Europe, and in her home country of Egypt, she received standing ovations, and held sold out shows.

Dalida recorded her music in at least 5 different languages

Dalida was known as a multifaceted and international star, partly due to the fact that she recorded her songs in many different languages. Most of her songs are in French and Arabic, but she also recored songs in Italian and German. Dalida also recorded music in English! 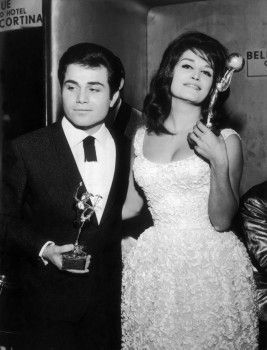 Dalida with her brother Orlando – WikiCommons

After producing ballads like “Bambino“, Dalida kept up with the changing music scene, moving easily to “yé-yé” style French rock music, and then onto disco. In the early 1970s, to the chagrin of her label, the singer decided to add a more personal touch to her songs, interweaving her personal hardships into her song lyrics. When her representation wasn’t keen on this, she took matters into her own hands and successfully booked venues to perform on her own.

Dalida had a tumultuous personal life

While her relationship with Morisse may have started out as a professional one, Dalida and the then married man began an affair for the ages. This was just one of the affairs that had a major mark on Dalida’s life. Eventually, in 1961, Morisse divorced his current wife, and he and Dalida were married in Paris. 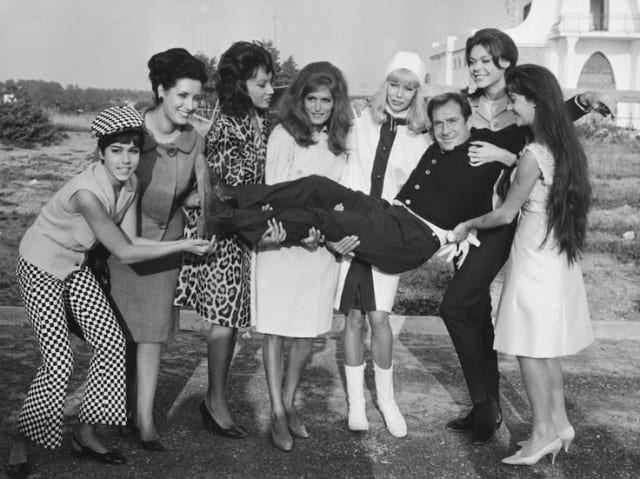 Soon after, Dalida traveled to the South of France where she began another affair with another man. Without much choice, Morisse granted her her independence to do what she wanted.

Her marriage with Morisse lasted just 5 short years. Dalida then became engaged to Italian singer Luigi Tenco in the late 1960s. Tragically, after a botched performance in the Sanremo Festival, Tenco committed suicide because he couldn’t live with having failed at the festival. Dalida took this to heart, attempting to take her own life just one month later. She recovered, but this was just the start of the terrible experiences that would seriously mark her life.

When she was 34, she became pregnant by a 22 year old Italian student (whom she famously wrote the song “Il venait d’avoir dix-huit ans” or, “He had just turned 18” for). She decided to have an abortion, which left her infertile. This was a major blow to Dalida, as according to close friends she always dreamed about having children. 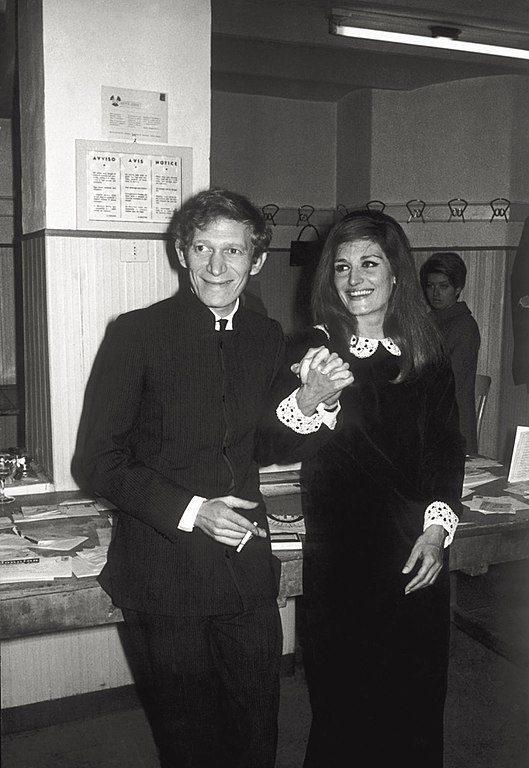 In 1970, Dalida’s former husband, Morisse, took his own life. The pair had remained on good terms, so this came as another hard blow to the singer.

In 1975, one of the singer’s close friends and fellow performers Mike Brant also took his own life.

Another one of her lovers, Richard Chanfray, also took his own life in 1983. The grief that Dalida was experiencing from all of these losses must have been unimaginable. When I discovered everything that the singer had gone through, my heart seriously went out to her!

The stream of death that seemed to follow her, haunted her deeply, and sadly, in 1987, Dalida also took her own life in her Parisian home. She left a heart-rending note which read “Life is unbearable for me… Forgive me”.

Dalida’s legend lives on in Montmartre

Dalida left behind millions of fans who mourn her to this day. If you find yourself in Paris, there are many places to visit in order to pay homage to the singer. 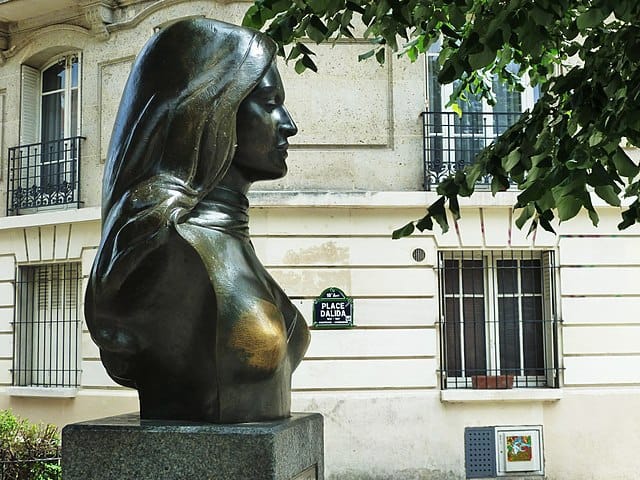 Start out by paying a visit to the Place Dalida in the 18th arrondissement. It is here you’ll find the bust in her honour that you can touch to bring you good luck.

While you’re in the neighborhood, you can take a peek at Dalida’s former home on the rue d’Orchampt. 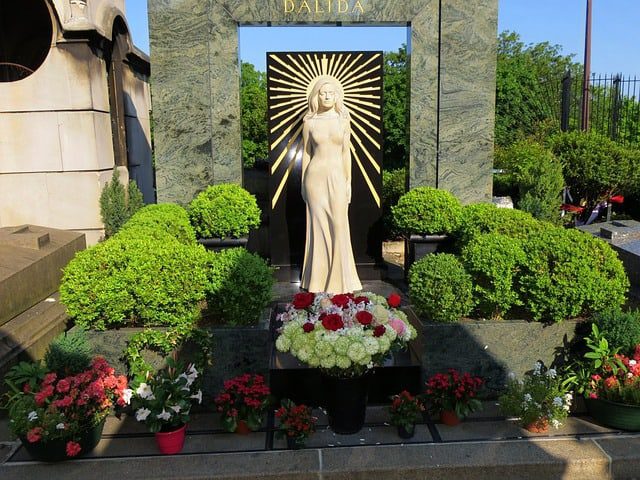 Next, take a trip to the Montmartre Cemetery, where you can visit her grave, and bring flowers if you’d like! It was here that my interest in the singer was first sparked, as her grave is truly beautiful.

Last but not least, check out a show at the Olympia Hall in the 9th arrondissement, where Dalida performed at so many sold out shows.

Popstar Dalida’s life may have ended tragically, but in my opinion, that is all the more reason to celebrate the beautiful art she produced while she was living. After reading this article, I hope I’ve inspired you to listen to some of her hits! Start with “Bambino”, move onto “Je suis malade“, and then move onto “Salma ya Salama“, and you’re off a great start!

I also recommend watching the 2017 movie Dalida, a biographical film on her life.

If you’re still searching for ways to discover more on Dalida, why not take a walking tour with us through Montmartre?! Anyway you do it, get out there learn more about this superstar, she deserves it!