Paris - Neighborhoods and where to stay, Paris - Walks 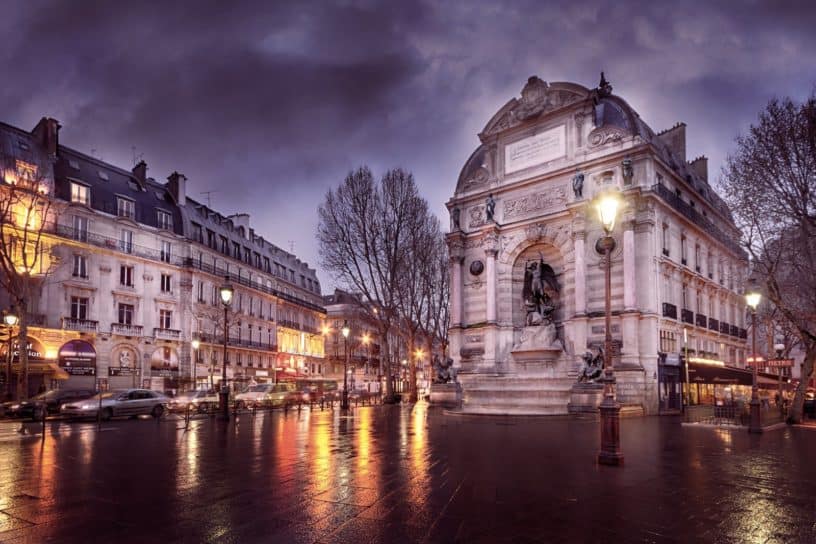 If the Place de la Sorbonne is thought to be the heart of the Latin Quarter, you can be sure that the Place Saint Michel is its front door and that it tells a lot about the history of the neighborhood!

When the emperor Napoleon III decided to promote the major urban reform of the city during the nineteenth century, the prefect Georges-Eugène Haussmann was asked to present him a project for the North-South axis.

The newly inaugurated Sébastopol Boulevard was to be extended, going through the City Island. On the other side of the island, the boulevard would cross the Saint Michel bridge, continue its way and be named “boulevard Sébastopol-Rive Gauche“. It was only later that it got its actual name Boulevard Saint Michel.

Now that you’ve been slighly introduced to the reasons why the Saint-Michel Square exists, read on and find out 3 things to learn from Saint Michel! It is one of the most important square of the Left Bank, because it is indeed the main entrance to the charming Latin Quarter!

Saint Michel was once a little church 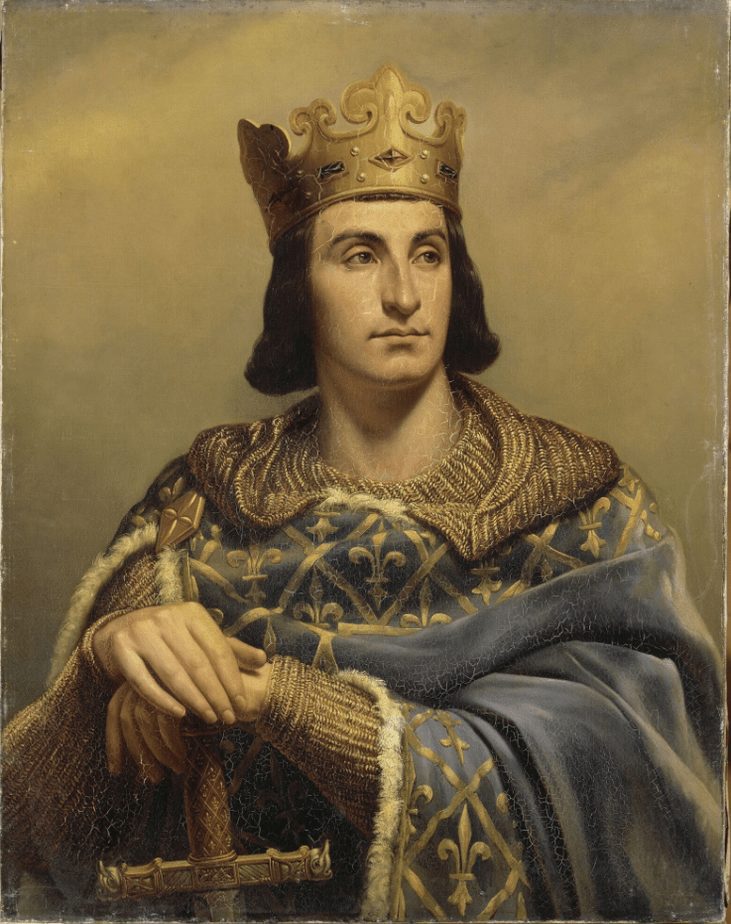 Nowadays, when we talk about Saint Michel, we think about the square embellished by its fountain. But one thing most people ignore is that Saint Michel used to be located on the other side of the Seine river. It used to be the name of the church of the Kings Palace, which was built long before the Sainte Chapelle that still exists.

It is believed that the baptism of the King Philippe Auguste took place in this church and many religious services for the Kings of France happened there during the Middle Ages as well. But, this little church ended up being destroyed in 1780. 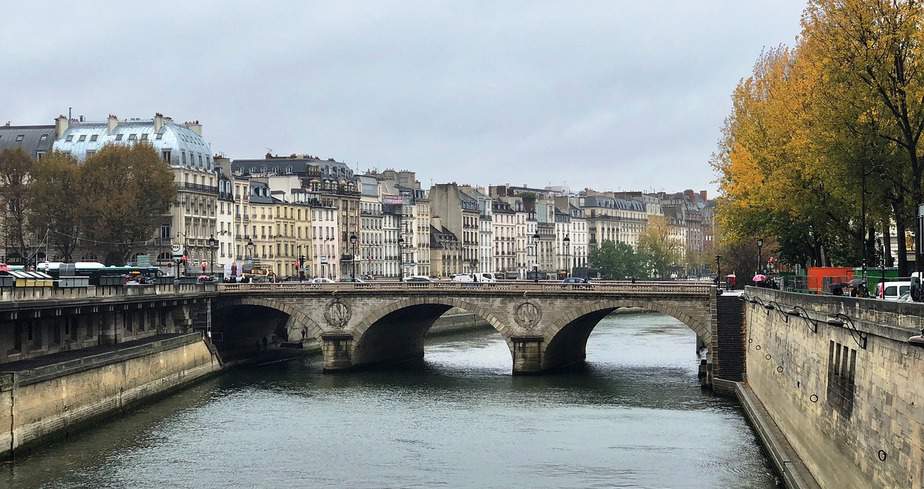 In 1378, the King Charles V wanted a stone bridge to be built near the chapel. The merchant Provost and the captain Hugues Aubriot were responsible for this project. Surprisingly, the construction of the bridge was completed fifteen years later!

The construction of the Saint Michel bridge took so many years because it encountered a few difficulties. First of all, there was a dispute between the city and the monks of the Saint-Germain-des-Près that claimed the land was theirs, including the bridge!

Then, in 1616, the winter was extremely harsh. A thaw destroyed half the bridge and the houses on it. It was rebuilt with more houses: many artisans settled there. A 1786 royal decree impose that all the houses found on bridges in Paris ought to be put down. This decision was made once they found out they were weighing and damaging the bridges. Walkways were built instead.

Finally, in 1857, the emperor Napoleon III asked the engineer Vaudrey to rebuild the bridge aligned with the Boulevard de Sébastopol and wanted his initial “N” to be sculpted on the bridge. Later, the bridge was open to circulation at last!

The story behind the construction of the Place Saint Michel 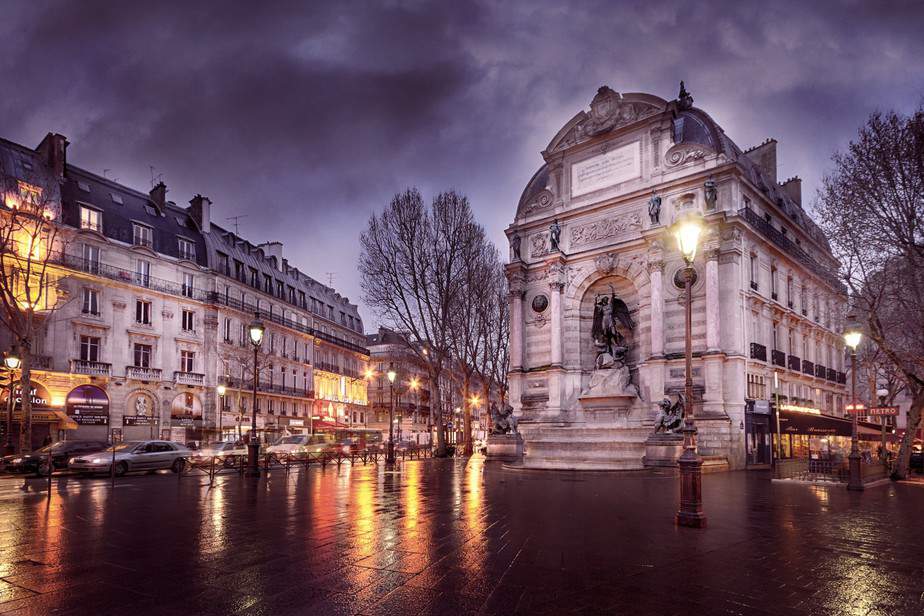 The layout of the new boulevard pretended the construction of a square in the Latin Quarter, in a precise counterpoint of the Place du Châtelet that is found in the Right Bank of Paris.

The Baron Haussmann commissionned the young architect Gabriel Davioud for the project because he clearly stood out during the urban reform of Paris. Davioud embraced the urban ideologies of Haussmann. In Haussmann’s vision, there was no room for great monuments scattered around the city. His project was more ambitious, he wanted to turn the whole city of Paris into a monument. Haussmann wanted every detail, every street, every corner of Paris to be treated and seen as a monument!

To comply with the emperor’s request, Davioud designed an archangel Michael, which is a bronze sculpture made by Francisque Duret, that was by the Renaissance painting St. Michael Vanquishing Satan by the Italian artist Raphael. The sculptures of the Place Saint Michel were a metaphorical tribute to the military victories of the Second Empire.

Have a look at the details 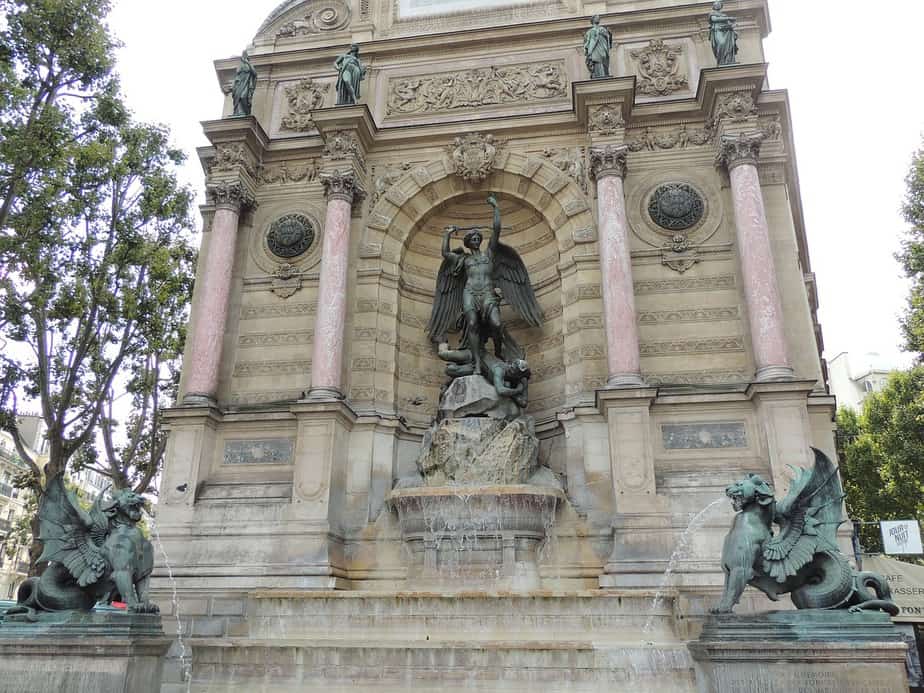 On top of the columns, four two-meters-high statues represent the cardinal virtues. From left to right: Prudence, Courage, Justice and Temperance. On the basis of the fountain, two chimaeras spit water. On the top, the Power gives Moderation its hand. Before, we could see Napoleon III’s coat of arms, but it disappeared and it is the coat of arms of the city of Paris that replaced it.

Saint Michel was a unique project. Ambitious, it was born out of Haussmann aspiration of greatness! My article is over and I’ve shared with you 3 things to learn from Saint Michel, but there is actually so much more for you to discover and learn about! But the best way to experience this wonderful area is to walk there and have a closer look at all its details! What I recommend you to do is to join a walking tour. During the tour, a local guide will walk you through the neighborhood, share with you its history, answering all your questions and doubts, and show you the best places! It definitely is the greatest way to experience Paris! If you need further information about anything, don’t hesitate to contact us! I hope you’ve enjoyed reading this article and to see you soon in one of our tours!