Lisbon - Top 10, Lisbon – Activities and Things to do 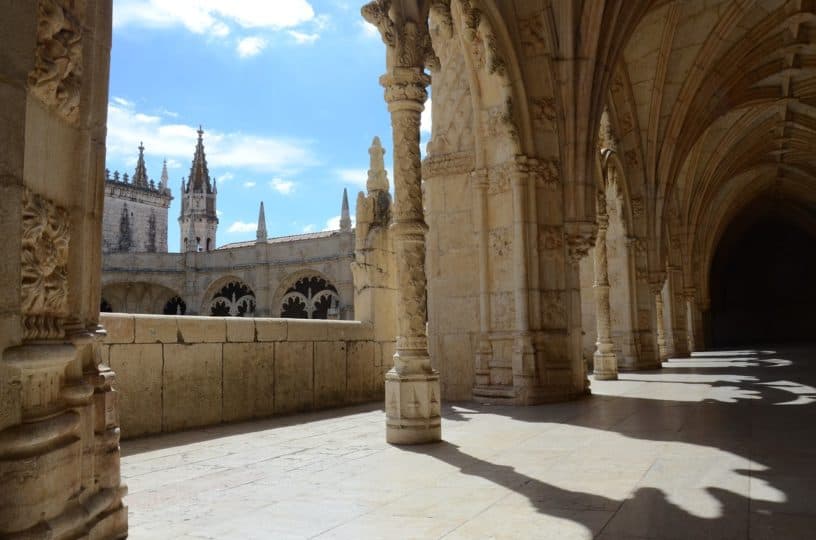 To highlight the importance of the Portuguese discoveries, the King Manuel I, after getting the throne, decided that it a monument needed to be built to represent this glorious era. The monastery was donated to the Jerónimos monks, so the construction had to be a quiet place where they could pray in peace for the King’s soul and also for the sailors and navigators during their long travels of new worlds discovery.

Since it was built during the King Manuel I period, the monastery is the greatest example of Manueline architecture style, which is a combination of Gothic and Renaissance style, with Portuguese national and religious symbols, like nautical motifs, plants, exotic animals among other stone-engraved details, that make this architecture style one-of-a-kind!

Apart from the Monks rooms and places, you will also be able to see the church where important Portuguese figures who played key roles in the history of Portugal are buried. All the areas of the monastery are stunning. The architecture of the Jerónimos Monastery will impress even the people who don’t pay much attention to historical details and their meanings. Nobody is indifferent to the beauty of the monastery!

The beauty of the southern entrance portal of the Jerónimos Monastery 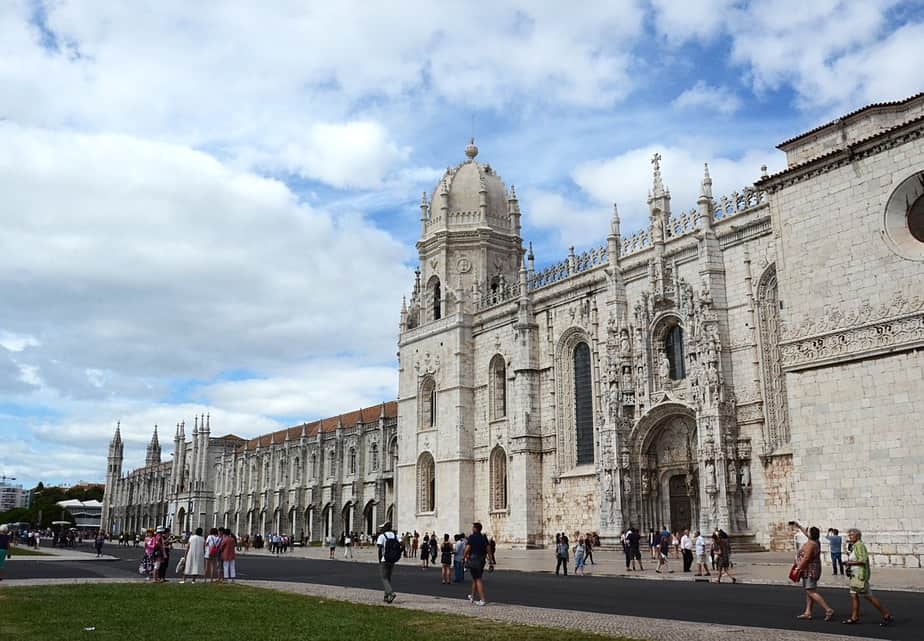 The southern entrance portal was designed to be a triumphal arch. It was conceived by the architect João de Castilho. In terms of content, we can notice the consistency between the Old Testament and the New Testament.

In the inferior leval of the portal, we see the twelve apostles and the Infante Dom Henrique. In the mid level of the portal, you will the Old Testament prophets that prophesied the life of Jesus, but also the Saints with the Mother of Christ in the centre, the Virgin Mary with baby Jesus and the cup that received the Three Wise Men offerings. On the upper level, we find the Church as an institution and the priests. Then, at the very top, there’s the image of São Miguel, the angel of the King. Have a look at the central axis of the portal that is represented by São Miguel, the Virgin Mary and the Infante D. Henrique. This central axis purpose is to show the connection between men and God. This is the iconographic message the portal tries to show to the visitors. 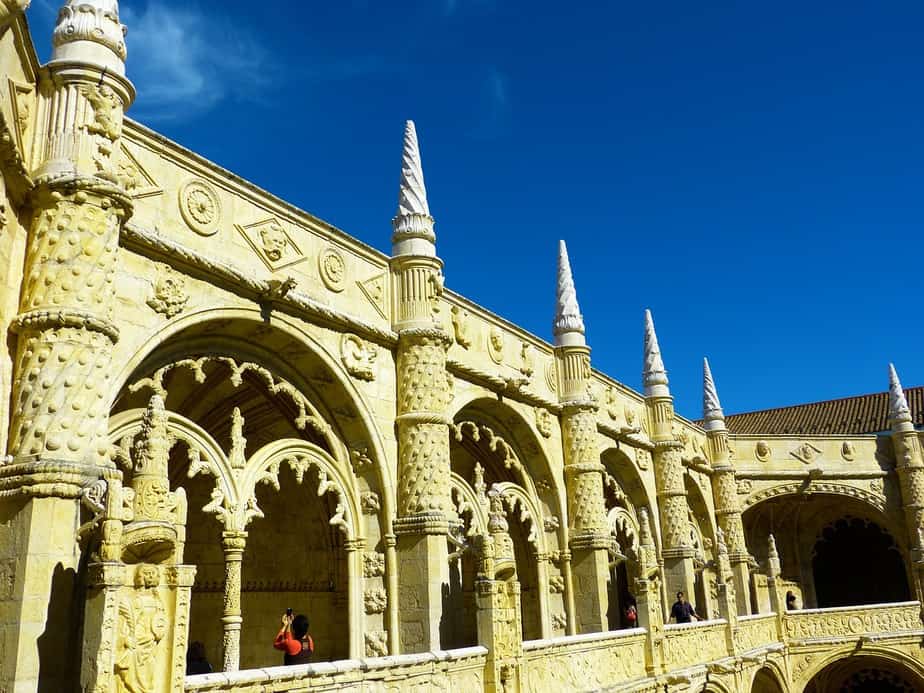 One of the first early writings about architecture was about the Manueline style, in 1842 by Francisco Adolfo de Varnhagen. He’s the one that gave this style its name to designate the architectural production of this King Manuel I period late Gothic style.

The Manueline name success kept increasing. It quickly spread and started flowing in educated circles. For a long time, it was believed that the Manueline referred to the maritime symbolism, with its shells, anchors, ships, vessels, but it actually isn’t true.

The real and authentic sixteenth century Manueline referred to a wide set of artefacts, that can be found for instance in the court’s life, naturalists themes reproductions. The maritime references happened to be there, but this choice was not on purpose. The Manueline managed to be a late Gothic style which is typically Portuguese, that appeared during a period when the celebrations of Portuguese expansion were done through great symbolic meanings and the presence of the Kings symbols as well, the Armillary sphere and the Cross of Christ.

The most beautiful cloister in the world 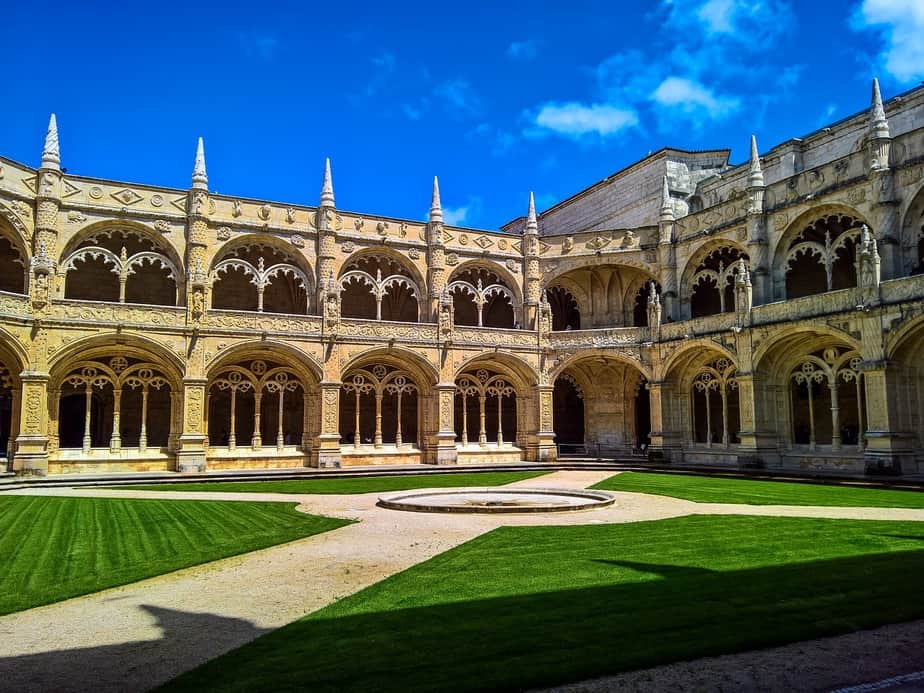 The Jerónimos Monastery cloister is a true masterpiece! Each of its galleries tells a story.

For instance, one of the galleries refers to the passion of Christ through its Calvary related symbols. The purpose of these details were for the monks to have the opportunity to meditate, reflect about what they called the Via Unitiva to God, reminding themselves of the Passion of Christ different steps.

The other galleries tell other stories that are parallel to this first one. These are related to the Portuguese monarchy, the reign of King Manuel I.

The cloister of the monastery is a haven of peace. You will love it! Pay close attention to the details, they will tell you a lot about Portugal history, culture and beliefs! 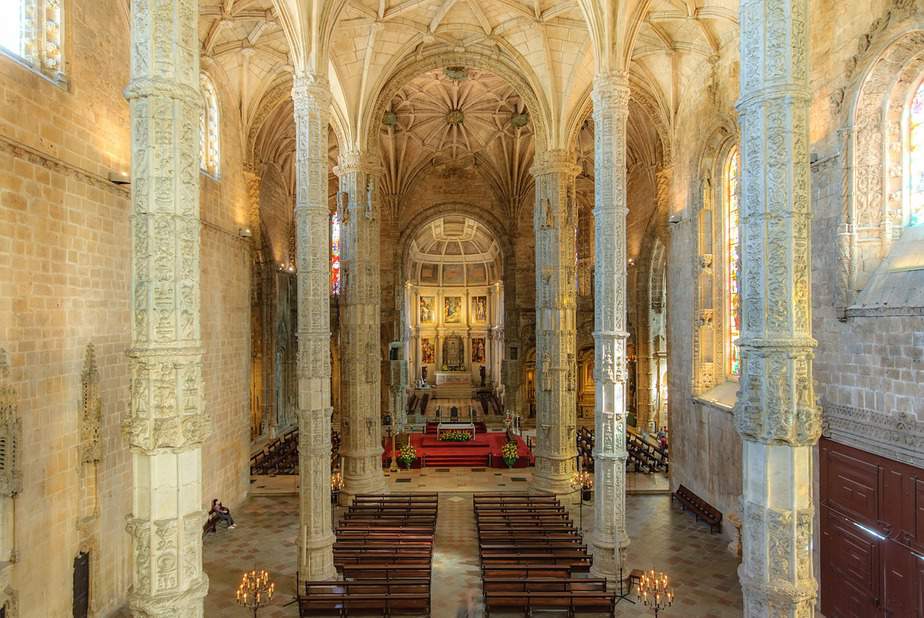 While visiting the Jerónimos Monastery, do not miss the Church! Its design give us a unified perspective of the place.

The design of the vault was particularly complex. João de Castilho was in charge of the vault construction projects. Its curved “ribs” give the vault a unique look, which you will thoroughly enjoy!

The Jerónimos Monastery used to have a Mass before the sailors went to conquer new worlds. If you want to feel this kind of historical setting, you can join one of the Sunday masses in the Church, where the choir is usually present, which will create an even more immersive and captivating experience. After joining this tradition, I’m sure you will feel inspired and motivated to learn even more about Lisbon and Portugal history!

The tombs of Portuguese important figures 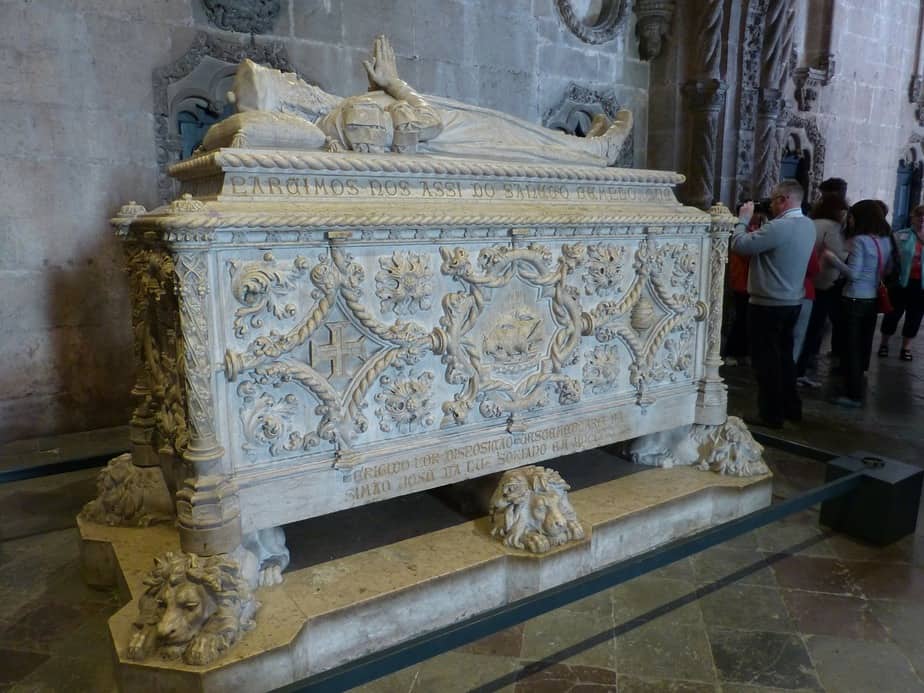 In 1880, the bones of the explorer Vasco da Cama and the poet Luís de Camões were transferred to the Jerónimos Monastery. Their tombs were designed by the sculptor António Augusto da Costa Motta and can be found in the church basement. You will find Vasco da Gama on the North side and Luís de Camões on the South side. These two men were the greatest representatives of Portuguese expansion and explorations, earning the honour to rest in peace by the King.

Located in the wing that was built during the eighteenth century, you will be able to see many objects from different times, such as potteries, weapons, and jewelry.

If you visit the Jerónimos Monastery and venture yourself in this museum, you can be sure you will learn a lot more about the different historical times of Portuguese history!

If you’re curious and love to understand more about the history and the culture of the countries you visit, I strongly recommend you to visit the Archaeological Museum.

In July of 1863, the King D. Luís decreed the constitution of a collection that would witness the Portuguese navy activities. This Museu Naval Português was born out of desire of this king, which had a great artistic and cultural sensibility, in preserving the historical past of his country, that was still so strong in the national collective memory!

Located in the western side of the monastery, you will be able to discover a great collection of vessel models from several periods of times.

The underrated quiet places of the Jerónimos Monastery

I’ve shared with you the main attraction of the Jerónimos Monastery, but there is still so much for you to discover and explore! Visit the Transept Chapels and the Sacristy of the monastery to get the feeling of having explored all its corners.

Take a few pictures and share them on Instagram. Tag us on your pictures, so we can get to know which were your favorite places and details of the Jerónimos Monastery. We are always so eager to find out about your experiences and perspectives! 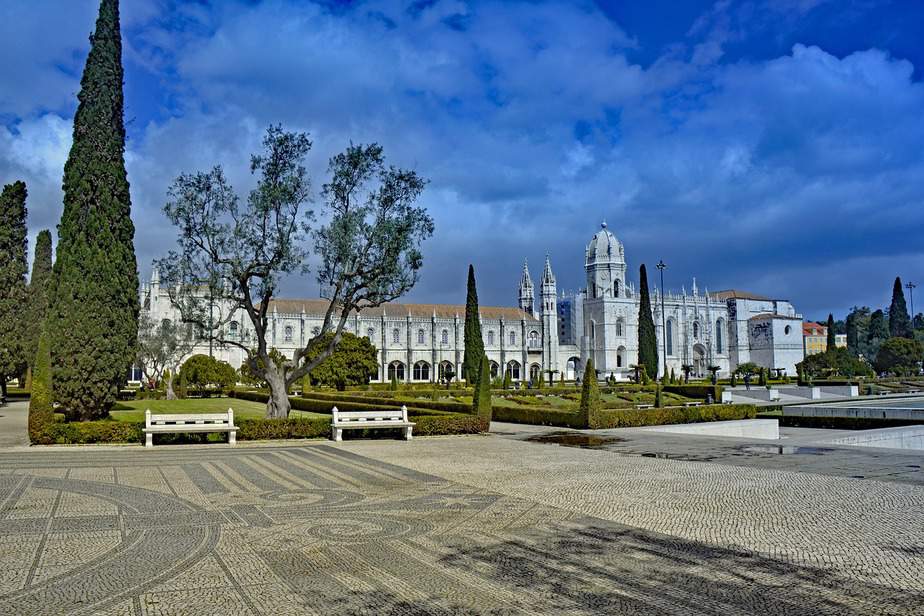 One of the main reasons to visit Lisbon’s Jerónimos Monastery is obviously because of you being in Belém! If you’re coming to Lisbon, you are visiting Belém, since it is one of the most stunning highlights of the city!

Going to Belém without visiting the Jerónimos Monastery is just unthinkable! In case you’re wondering what there is to see and visit in the neighborhood, I suggest you to read this article that will hopefully get you inspired! Belém truly is one of the most amazing areas of Lisbon. A walk in Belém is all you need to awaken new desires of adventure!

There you have it for the 10 reasons to visit Lisbon’s Jerónimos Monastery! I hope you’ve enjoyed reading my article. Don’t hesitate to contact us, if you need further information about anything! The Jerónimos Monastery truly is a unique and marvellous place you will love to visit. There’s a good reason it is one of the greatest highlights of the city of Lisbon! Visit it and create life lasting memories. I hope to see you soon in Lisbon!