10 Best Museums to Visit with Children in Paris 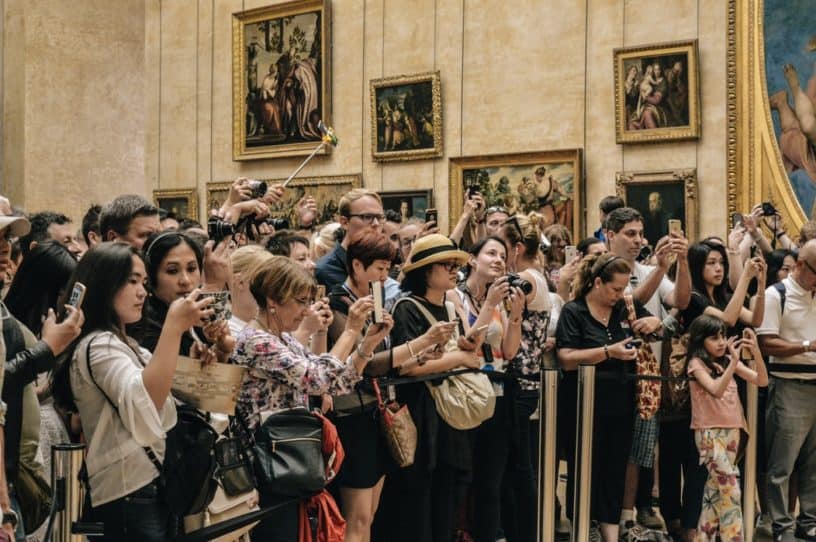 Families enjoying the Louvre in Pais - by Alicia Steels - Unsplash

10 Best Museums to Visit with Children in Paris

Finding ways to keep a child entertained throughout the day can be challenging at the best of times — entertaining children while traveling is a whole other ball game.

The lack of beach in Paris makes it necessary for parents to get creative when it comes to daily excursions around the city. Of course, there are ample gardens and parks around Paris where a day in the outdoors can be enjoyed by both children and parents alike.

The Jardin Des Plantes and Parc Montsouris are beautiful places to take your family for a few hours on the grass. Public parks in Paris are also wonderfully safe and you can let your little ones roam free for the most part. 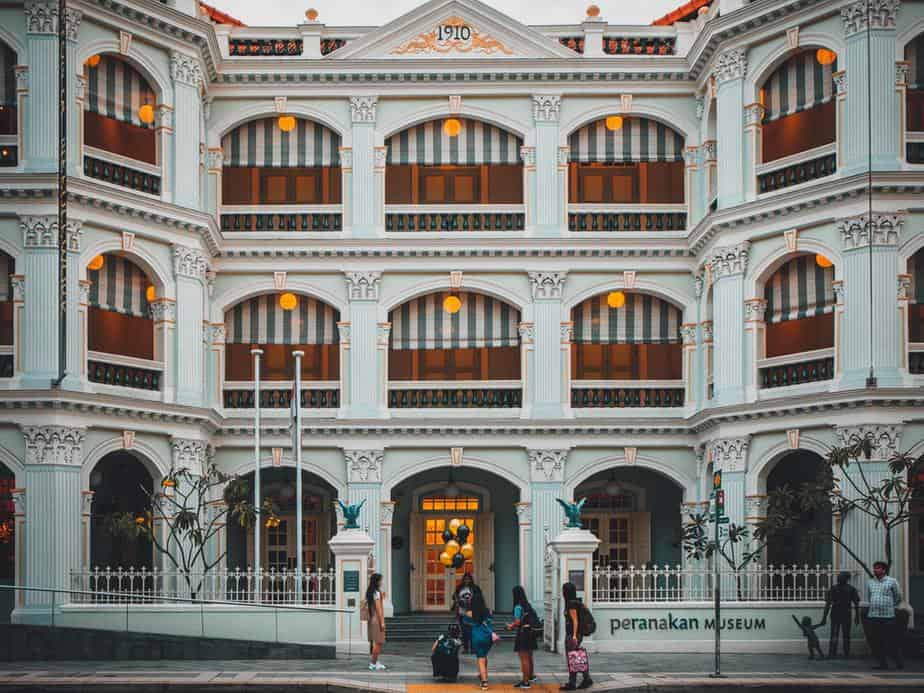 However one cant always rely on the Parisian wether to permit a day in the sunshine. When the clouds or cold comes in it’s time to get creative and move the entertainment indoors.

If there is one thing there is no shortage of in Paris, its museums. Though many of the fine art and historic museums aren’t typically suitable for child visitors, there are a few museums in the city that are actually great points of interest for children of almost any age.

Here are the ten best museums to visit with children in Paris and where you can find them. Enjoy!

The Madame Tussauds of Paris as it is widely known; the Musée Grévin is a wax museum that can be found right on the bank of the Seine in the 9th arrondissement.

I probably don’t need to explain why this kind of an institution provides hours of fun for even its youngest patrons. What could be more fun than posing for photographs with sculpted replicas of some of the most famous icons in the world. 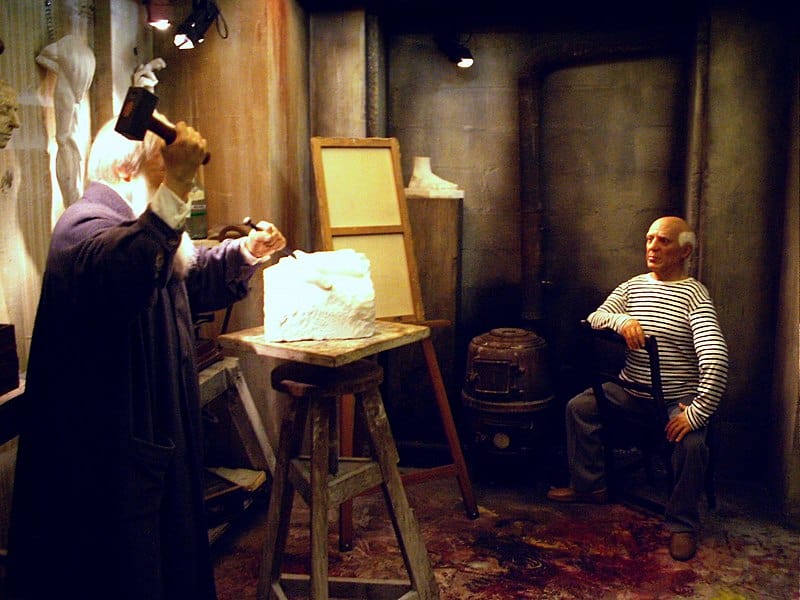 Your kids probably wont be able to identify all of the wax figures in the museum, but they’ll have endless fun moving from piece to piece in search of their next known idol.

The scene depicting Neil Armstrong walking on the moon is a crowd favorite. Following this you can head up the stairs to the gallery where the museum will show you how the wax works are made.

Kids under 5 visit for free

This art museum in the 8th arrondissement of Paris is not the obvious choice for a family day out — but it should definitely be on your radar.

Named the Petit Palais due to the fact that it is located directly across the street from the Grand Palais; the little palace is home to the Paris Museum of Fine Arts. 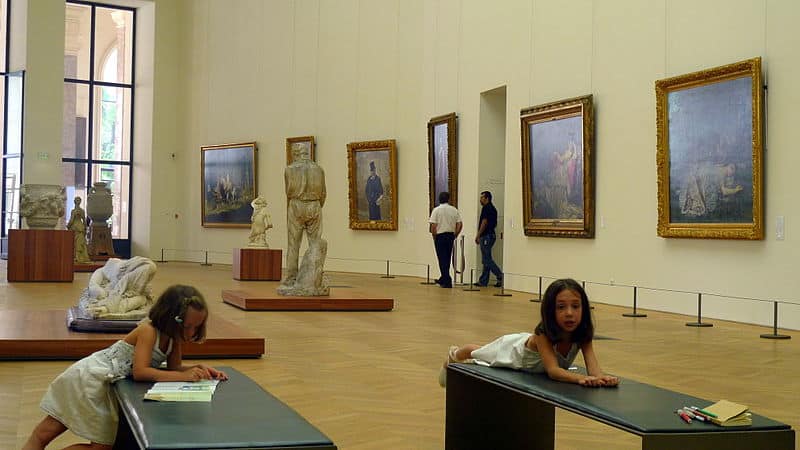 Fine art is a hit or miss with kids. If anything their attention is held maybe for the first exhibition room or two until the boredom of monotony kicks in. Unlike most fine art museums, the Petit Palais provides targeted storytelling tours specifically for children.

You may need to reserve space in advance for these tours as they tend to fill up. Entry into the permanent collections at the Petit Palais is absolutely free.

Since you’ll be right on the bank of the Seine already, take the kids for a walk along the banks after the tour and ask them about what they learnt.

Taking your kids through the Montmartre district is always a good idea . First of all, the Little Train of Montmartre is a great start to a day of excursions for any family. Your kids will love riding along the narrow streets and watching the sights go by.

Once you come to the Place du Tertr you’ll find another child friendly Parisian museum: the Salvador Dali Museum.

Dali’s weird and wonderful world is endlessly enjoyable for even the youngest of kids. The museum has an impressive collection spanning from paintings through to sculptures.

Enjoy coming up with creative explanations as to why these elephants are on stilts; and why this telephone is made out of a lobster. Dali’s mind truly was a children’s playground.

The Museum of Magic is a private museum in the 4th arrondissement of Paris. It is not a cheap excursion, but it is such fun!

The museum is dedicated to all things magic and trickery since the 18th century onward. Magic has been a huge form of entertainment for centuries; to witness the history of it in one space is as much fun for adults as it is for children. 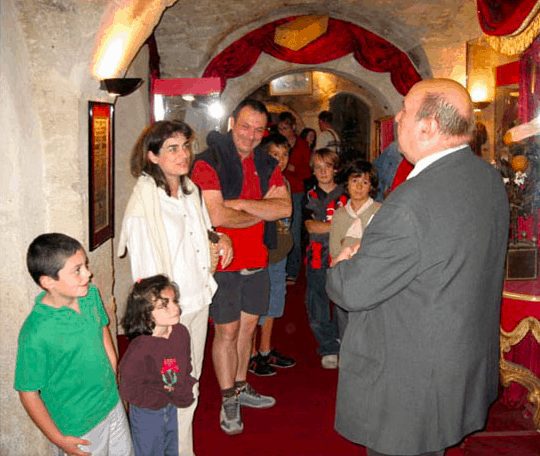 You’ll wander through seven rooms all filled to the brim with curios and magical objects like wands and sorcerers hats. Included in the entrance fee is a live magic show that the kids just love.

The magic show is conducted in French, but enjoying the show doesn’t rely whatsoever on understanding any of the language. If you only have time for one museum while in town, it should be this one!

Note that this museum is only open on Saturdays, Sundays and Wednesdays from 2pm to 7pm.

You might not think it, but a free guided walking tour is another interesting way to occupy a child’s mind for a few hours in a new city. The left bank of Paris boasts many attractions to enjoy by foot; the Eiffel Tower and Montparnasse Cemetery being the most obvious.

The French National Museum of Natural History is another great attraction in this district and a space that children run wild in… literally. 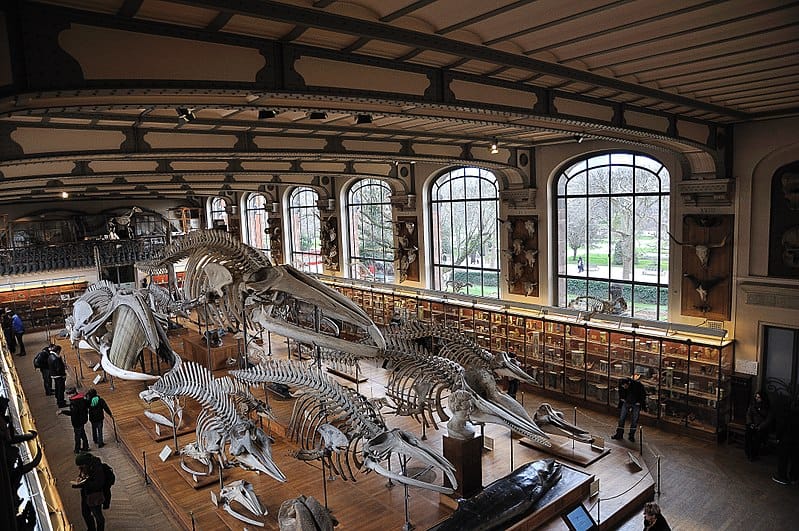 Situated on the Parisian Botanical Gardens, the grounds of the museum feature an eclectic array of content that send even mature adults into a juvenile whirlwind. From fossils and skeletons dating back centuries; to a full zoo with wild animals and a garden of flamingos — you won’t know where to begin, or to stop.

This is a museum that is best explored with a full days worth of time available. Comfy shoes are a must for all — the grounds are huge!

Paris’ Science Museum is another wonder of a facility. The only downside is getting to it, as it is right up top on the outskirts of Paris in the 19th arrondissement. If you’re up for the journey to the 19th, this museum will not disappoint.

I say this because it is one of the few museums in Paris to have a dedicated children’s center built into the core foundation of the museum’s educational program. The Cité des Enfants at Paris’ Science Museum can be divided into two sections that target children of different ages.

The museum brings all the children into one space to learn and play with one another, while parents are free to enjoy the rest of the museum at their leisure.

Upon arrival at Les Invalides (the site of this museum) you’ll probably come to feel like a lot of the exhibits are not particularly child friendly. Mostly due to the harshness of the historical content or the downright boredom factor for kids under 12.

Take a closer look and you’ll see that there is a lot more than meets the eye on this property. The many properties on the grounds are home to over 500,000 preserved artifacts gathered from warfare times. 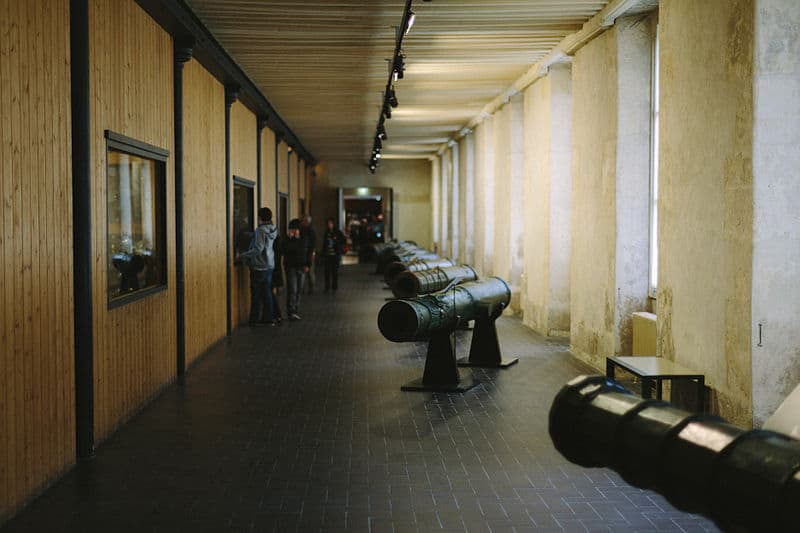 Make your way to the main courtyard where your kids can run amongst (and touch) actual canons that have been gathered through the centuries.

The old armor and weapons section is another child friendly one. Seeing the steel vests and gear that the horsemen donned back in the day, along with the swords and shields that protected them, is like something straight out of a fairytale book.

This nautical themed museum explores the French history of the seas. Most of the exhibits are made up of actual battleships and machinery that was present during that time.

The museum is also home to the official “royal barge” that actually carried Napoleon during his inauguration. Have fun explaining this part of French history to your kids — not quite what you’d call a short story. 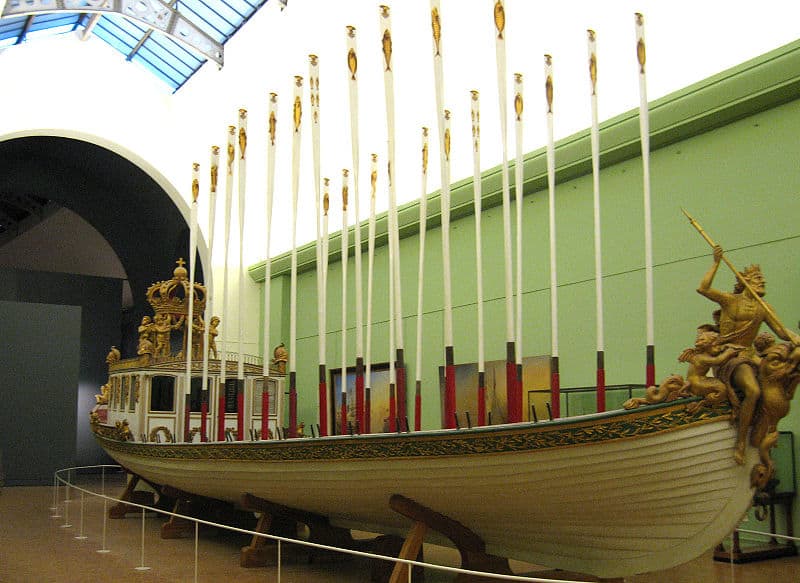 If your kids are remotely into boats or the sea they’ll love this space. What’s more, if you weren’t able to make it up to the 19th to see the cannons at the Musée de l’Armée, the Musée National de la Marine has a cannon exhibition of its own that your little ones can enjoy.

The museum is on the grounds of the Trocadéro Gardens over in the 16th arrondissement. You might like to pack a picnic to take with and enjoy outside before or after your visit inside the space.

The Musée de l’Air et de l’Espace is to airplanes what the afore mentioned museum is to ships. Likewise, if your kids are into airplanes then this is where you need to bring them!

The museum is located in northern Paris at the at the south-eastern edge of Le Bourget Airport. It is actually built into a former passenger terminal at the airport itself.

It is often suggested that the Musée de l’Air et de l’Espace contains the world’s finest collection of flying machines and preserved aerospace machinery. From fighter planes to Zeppelin airships, the space has it all. 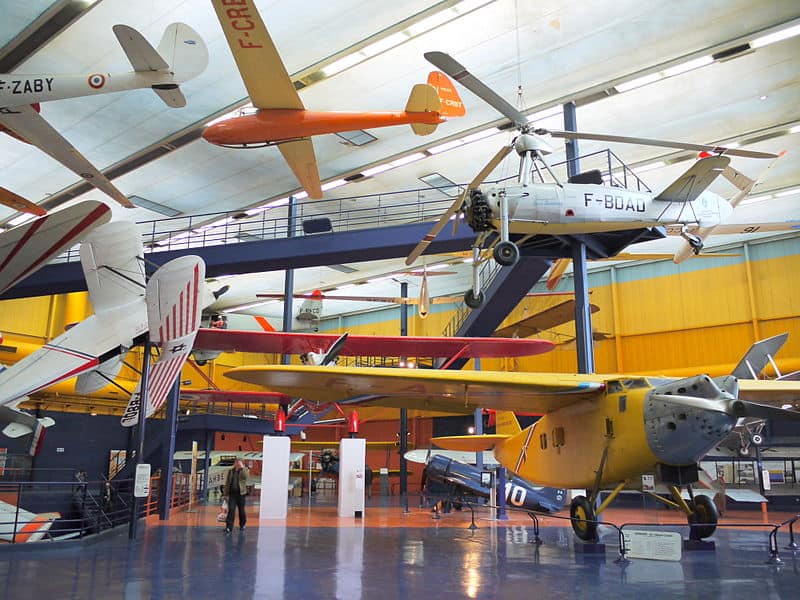 In terms of surrounding entertainment within this district there is not much to see. The area is, however, littered with some great Chinese, Indian and Moroccan restaurants where you can grab some dinner after your excursion.

My favorite is the Moroccan place just across from the museum’s main entrance. Le Palais de Fès has a great vibe and serves up tasty tajines. A great opportunity to introduce your kids to a probably foreign cuisine!

I must mention that as of February 2019, the Musée de l’Air et de l’Espace is reopening their Planète Pilote section. This is a space where kids can get involved in 60 minute long sessions with 40 interactive activities on the theme of ‘Aeronautics and Space’.

The museum offers between four and five sessions like this per day.

The Centre Pompidou in the 4th arrondissement of Paris is centered around modern and contemporary art.

The mezzanine level of the museum has a targeted kid’s space where the current exhibitions of the museum are presented to them through interactive programs. It’s hours of fun and leaves you time to explore the rest of the space at your leisure.

The 6th floor of the centre also boasts one of the most spectacular views in all of Paris. Make a game out of spotting landmarks on the Parisian skyline with your kids and enjoy a snack at the museum cafe called Georges. 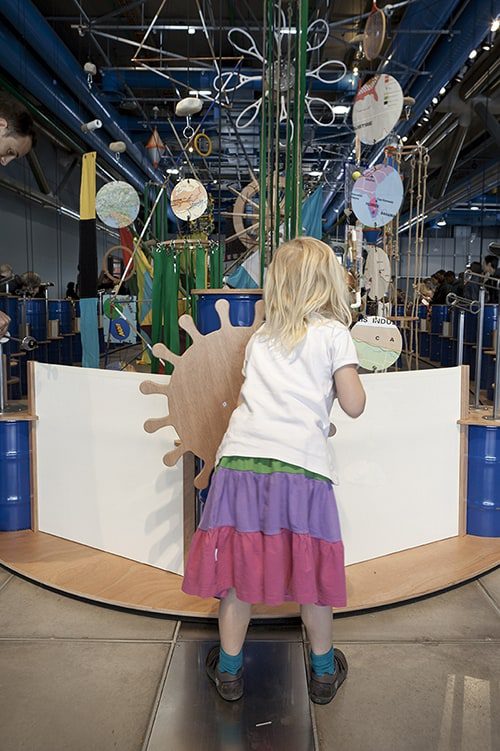 So there you have it. Entertaining children in the city of Paris clearly need not be a brain wracking task.

It’s never to early to feed a child’s mind culturally. And no better place to do so than Paris! Au revoir!